Magic: The Gathering started all the way back in 1993. The game is probably older than some of you reading this right now. As a highly variable rules-based TCG, every card features a relatively uniform structure. But for those cards with fewer rules to list or explain, there is an artistic addition: flavor text.

Flavor text appears italicized at the base of a card and provides a window into the lore of Magic’s world. Freeform, they are sometimes action-oriented quotes from the creature featured in the card itself. Other times, the flavor is clever descriptions or accounts from an omniscient narrator. Many times the flavor text on an MTG card is hilarious. What are the funniest cards in Magic’s gigantic library?

Going in chronological order, from oldest to newest cards as of the printing featuring the funny flavor text. 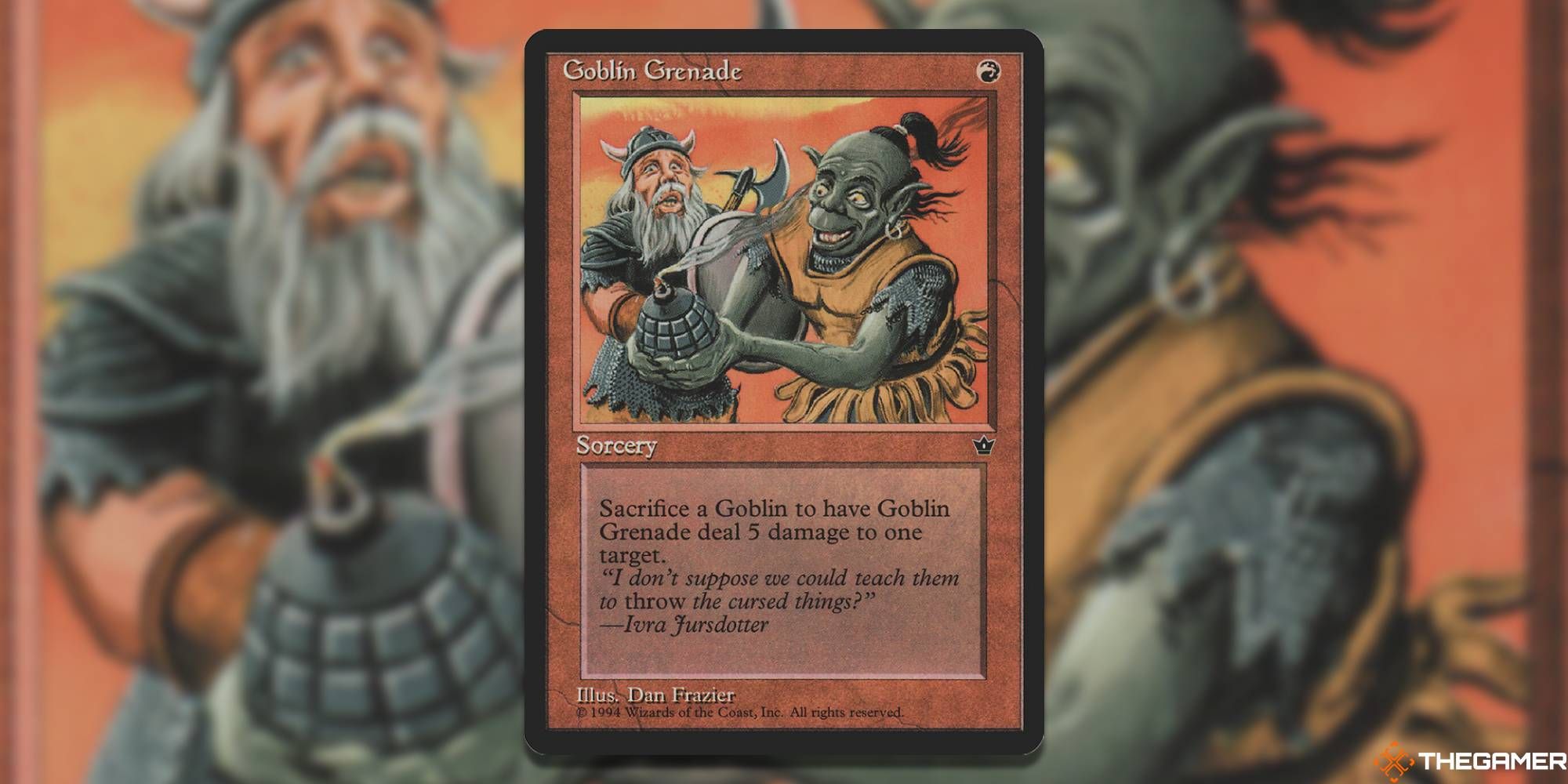 Text: “I don’t suppose we could teach them to throw the cursed things?”

Start with a bang. Behold the legendary Goblin Grenade, with many different iterations of the Goblin living their best life over the years. With art and flavor, the Goblin Grenade went from being an actual grenade, to a self-directed detonation, to simply a Goblin tied up and thrown with dynamite in his mouth. Goblin Grenade is where Magic's funniest creature type was born.

Easily one of red’s best sorceries ever made, the Grenade dishes out five big damage for only one mana — and one Goblin. 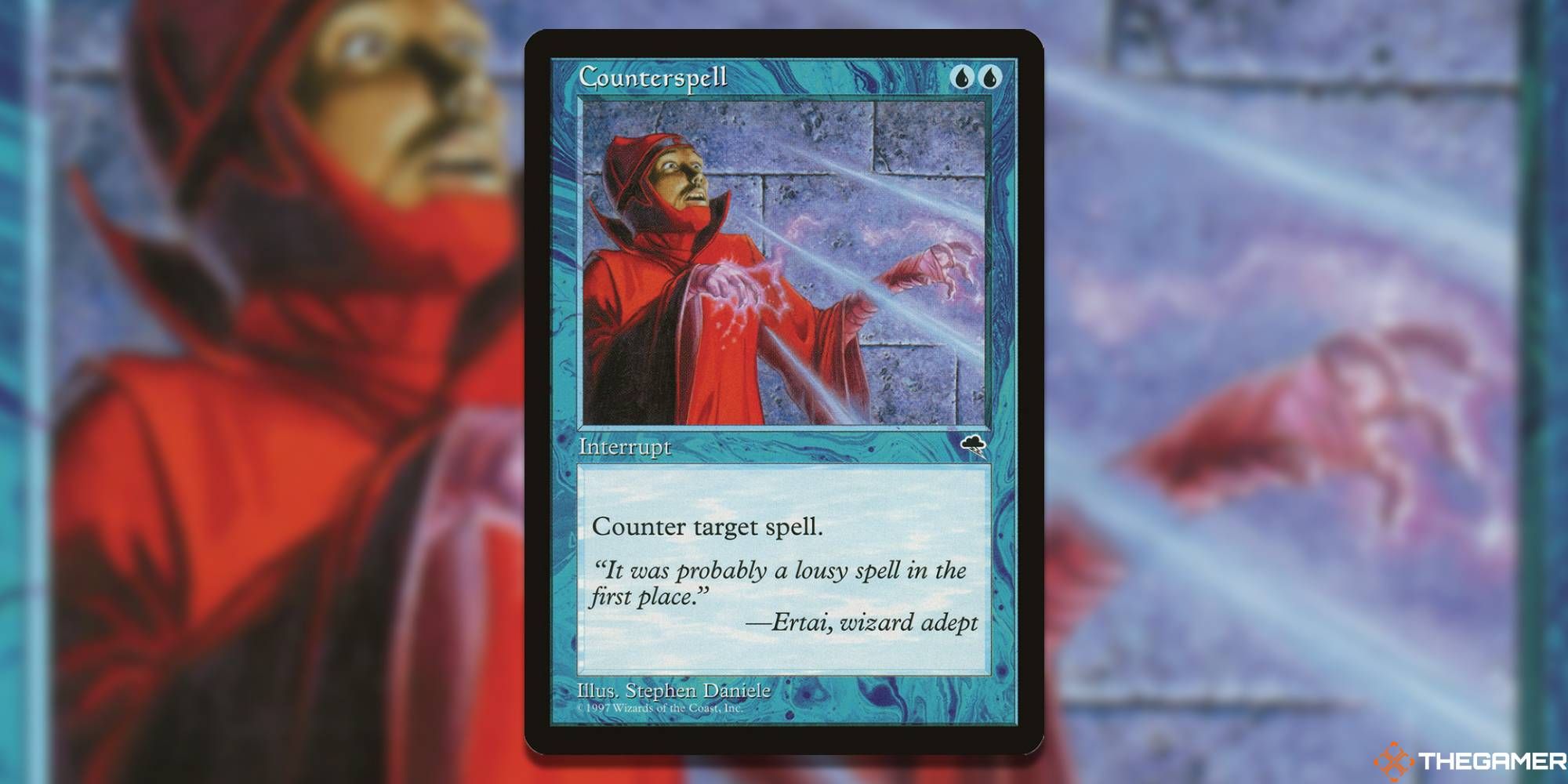 Text: “It was probably a lousy spell in the first place.” — Ertai, wizard adept

Counterspell. Love it or hate it, the spell is a certified classic. The best verbal wizard serves in the game are reserved for this highly-reprinted real estate. For only two blue, deny a fellow planeswalker the ability to resolve their spell, instantly pitting into the Graveyard.

Counterspell birthed the ability to simply say "No!" to your opposing wizard(s). Ironically, for the counterspell-wielding blue player, the less lousy the spell the better. 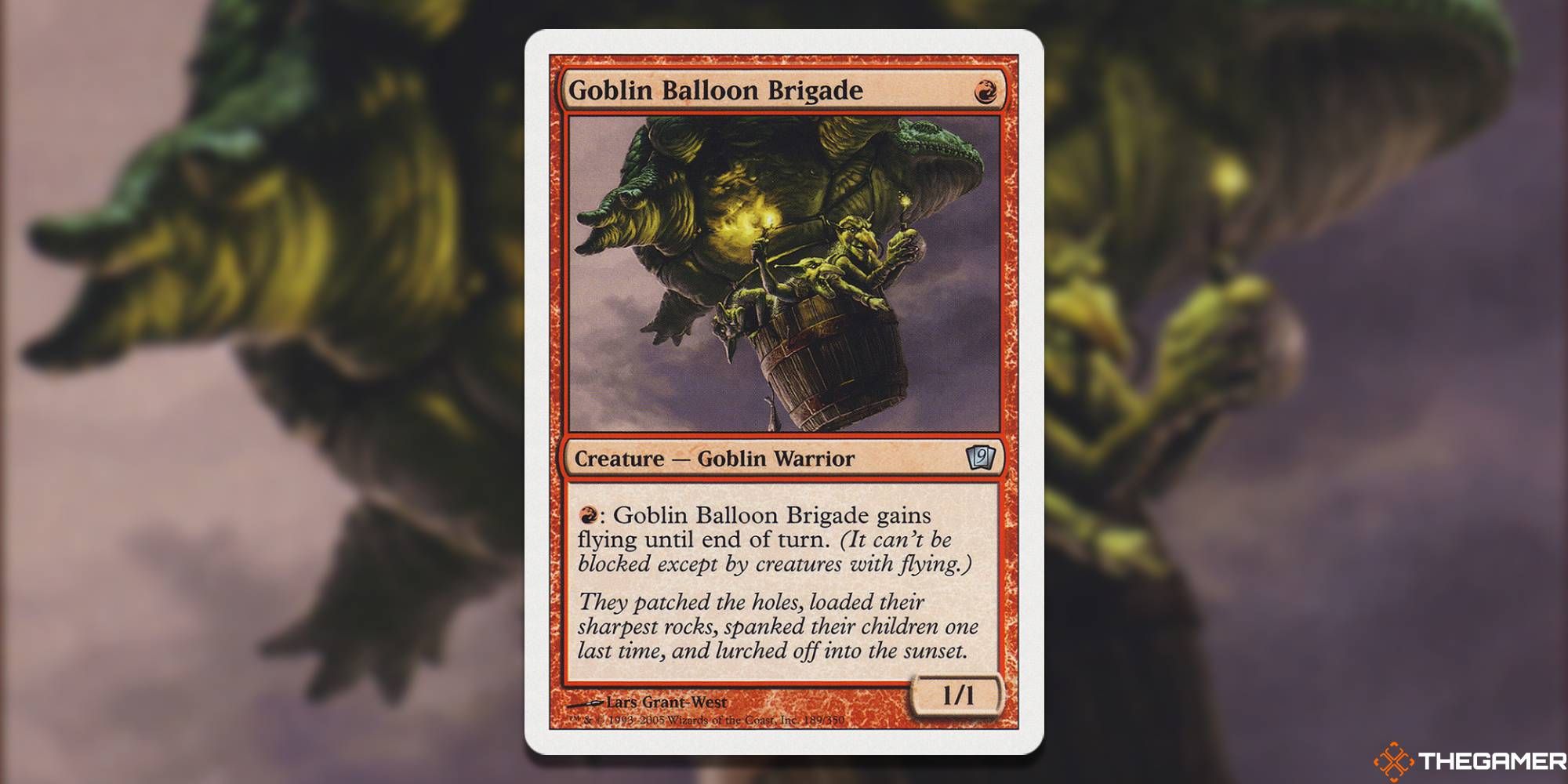 Text: They patched the holes, loaded their sharpest rocks, spanked their children one last time, and lurched off into the sunset.

There's maybe no better card than Goblin Balloon Brigade to showcase the lifestyles, antics, and versatile tomfoolery that MTG’s wicked little mountaineers get into. Goblins lead their own lives, they put their pants on one leg at a time just like the rest of us (well, that's actually unconfirmed).

The Goblin Balloon Brigade gives planeswalkers the jolly sight of flying Goblins, if only temporarily. Some say those goblins are still up there, floating about the world in their toad air balloon. 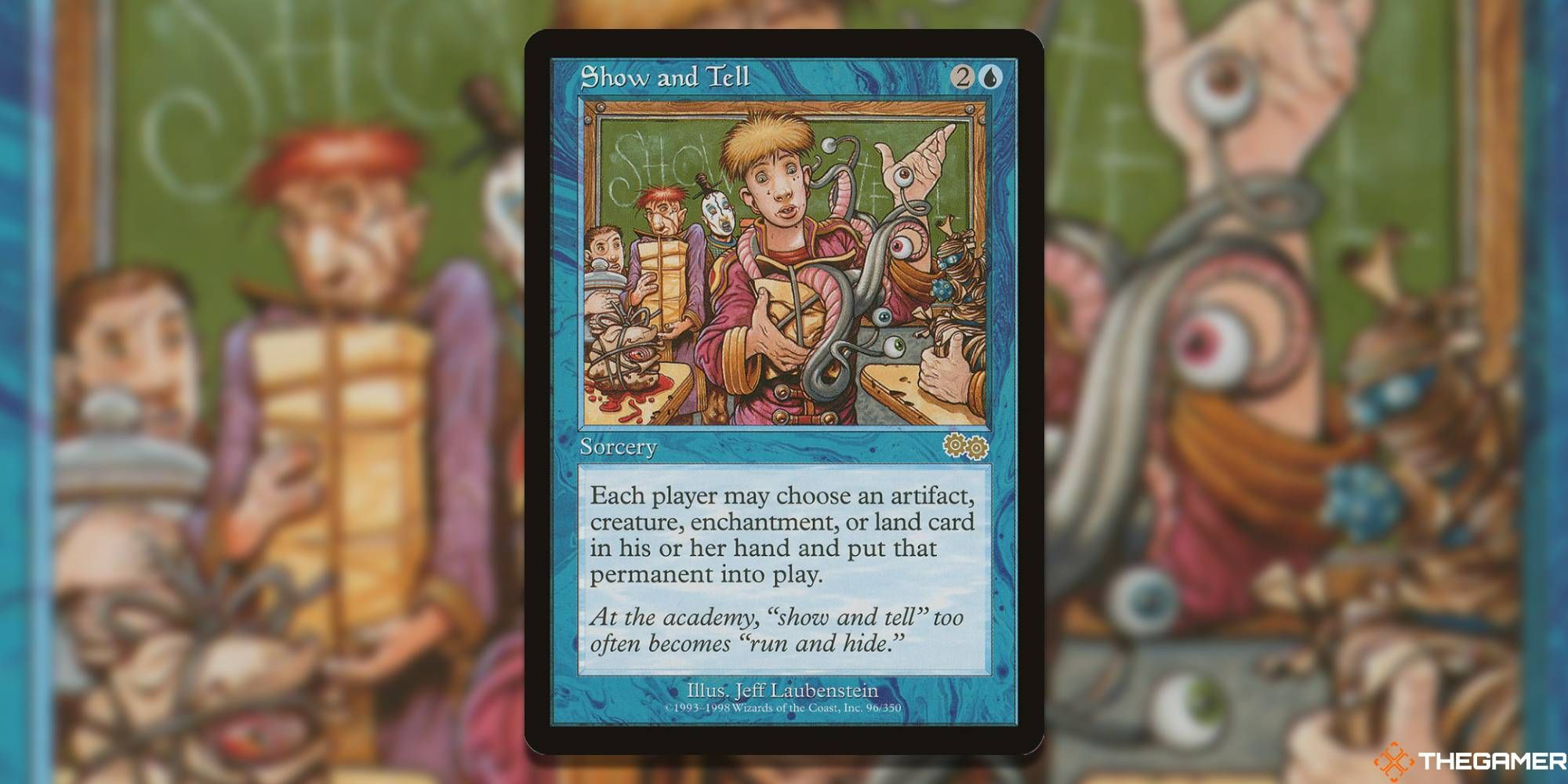 Text: At the academy, “show and tell” too often becomes “run and hide.”

Jeff Laubenstein’s art for Show and Tell almost looks like it could come from a comic book about Magic’s own school of wizards. Why does every wizard “show and tell” become a “Bring A Lovecraftian Beast To School Day”?

With this card, you can turn your game into the classic elementary school pastime. At only three mana, Show and Tell screams to the entire match: Show me what you got! 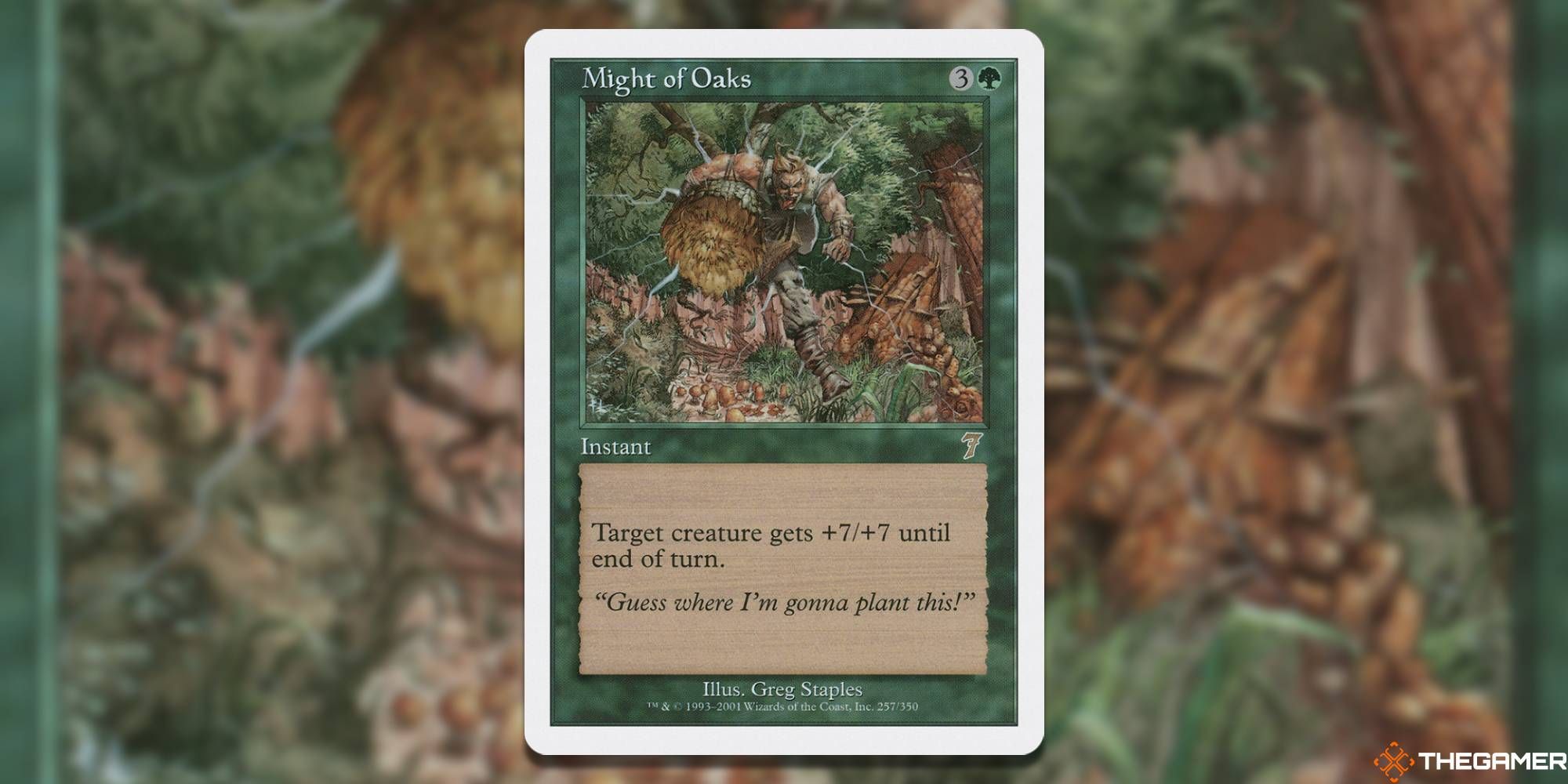 Might of Oaks begs for a banger flavor text. And the big green instant delivers. Short, simple, sweet. Nothing puts a smile on a planeswalker’s face quite like an instant speed +7/+7 effect. Whether you are buffing your favorite Squirrel or a soon-to-be mad-with-power Human – Might of Oaks delivers a worthy one-liner.

For best results, speak the flavor text of Might of Oaks right as you cast it, preferably on the game-winning alpha strike. Just make sure you are unblocked or ready to trample. 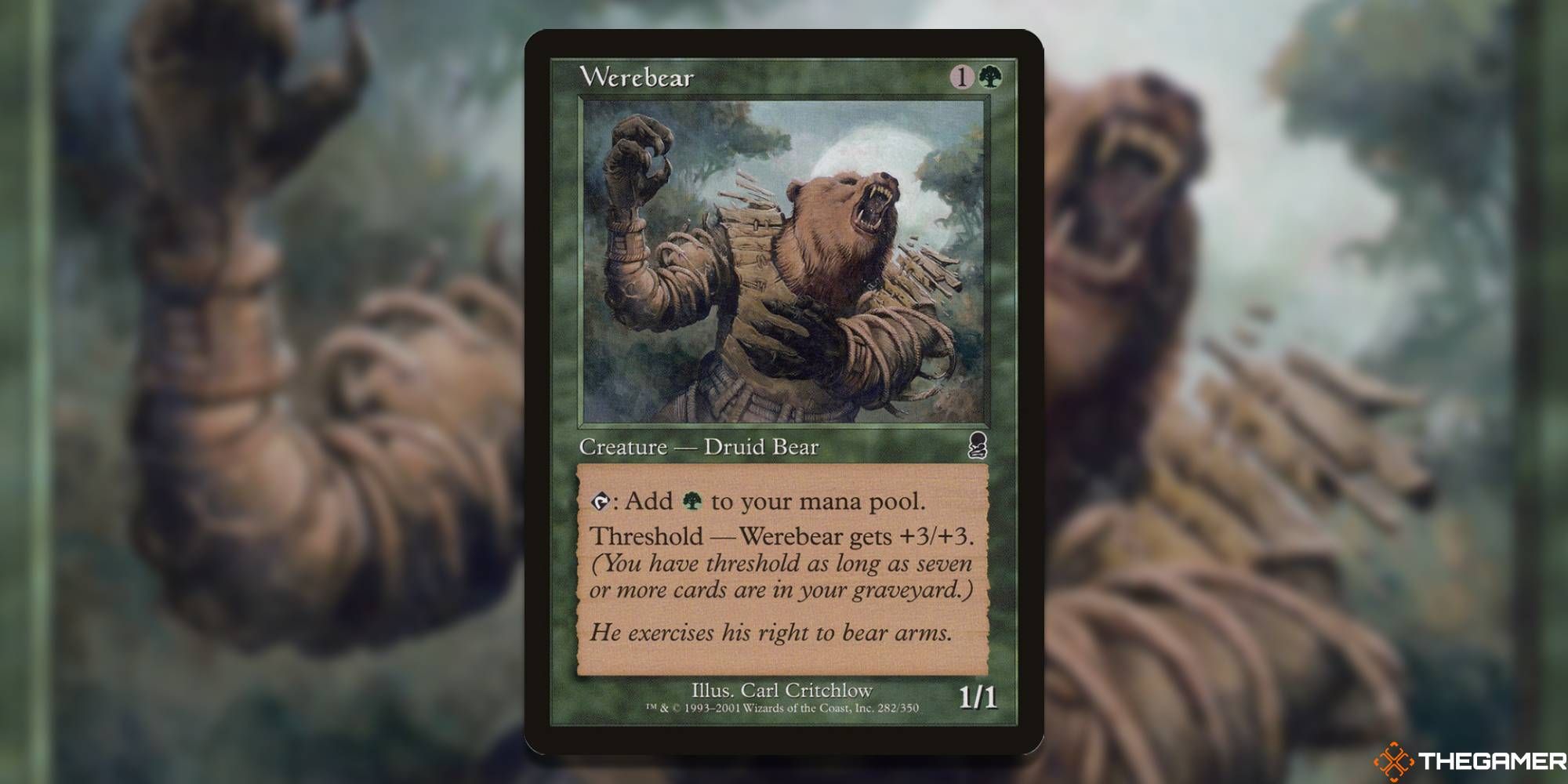 Text: He exercises his right to bear arms.

Werebear could feature the best flavor text of all time. Everyone’s favorite lycanthropic grizzly is definitely in the conversation. Built for the long game, the Bear gets closer to that +3/+3 Threshold bonus the longer the game goes.

Most interestingly, the Werebear is a Druid Bear creature type and features the elegant ability to produce mana. Does anyone else wonder what the more humanoid Werebear looks like on a moonless night? 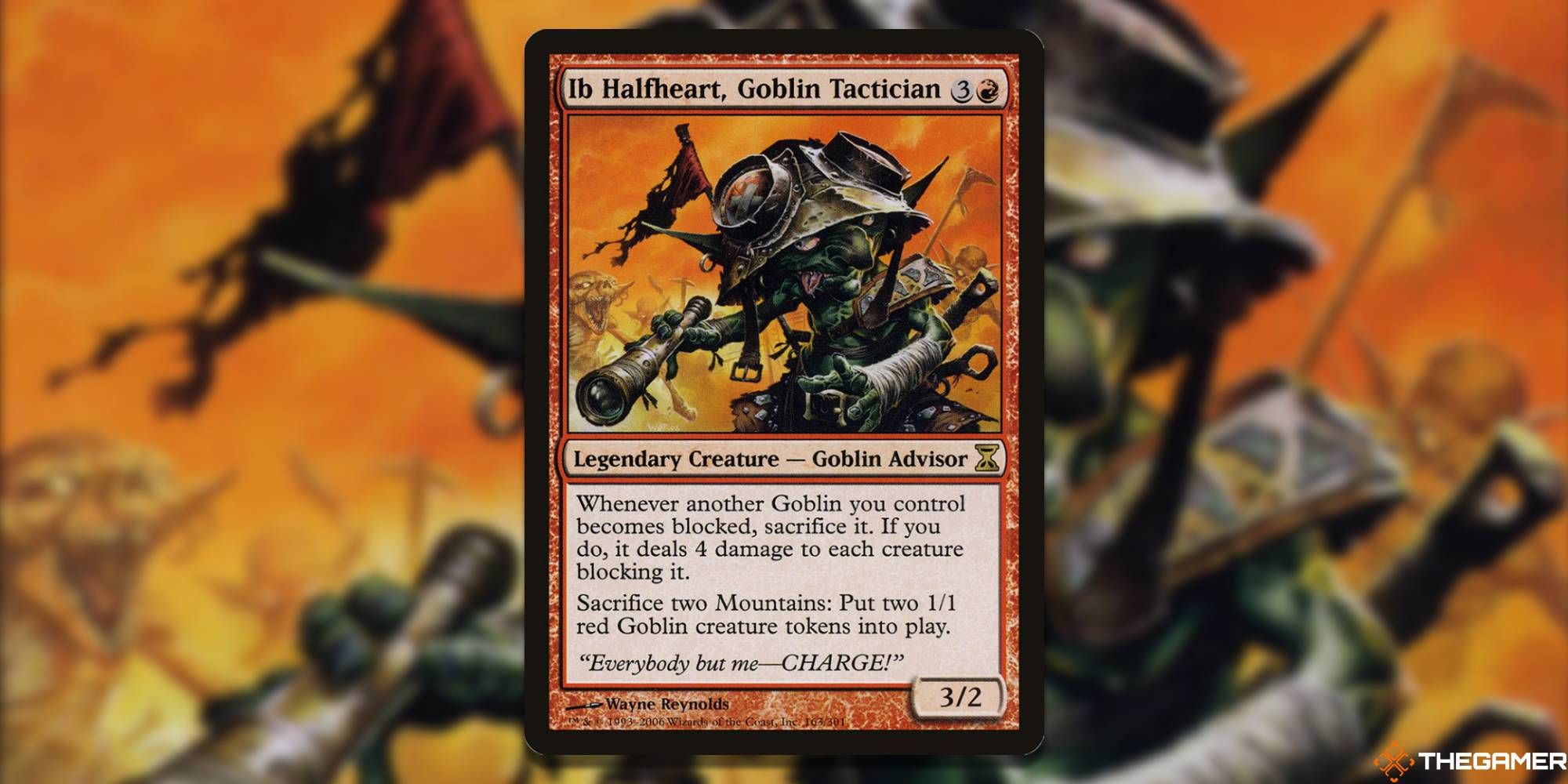 Text: "Everybody but me — CHARGE!"

Ib Halfheart is the legendary Goblin who nabs the title “Goblin Tactician.” His text, effect, and art by Wayne Reynolds coalesce to give us a Goblin paragon. High comedy and high death rates.

Ib Halfheart, Goblin Tactician makes every Goblin attack an agonizing dilemma for the opposition: take the damage or lose blockers. Sacrificing Mountains in the late game gives Goblin decks a chance to keep charging. Maybe even Ib himself will wade into combat, at the very end, when victory is already assured. 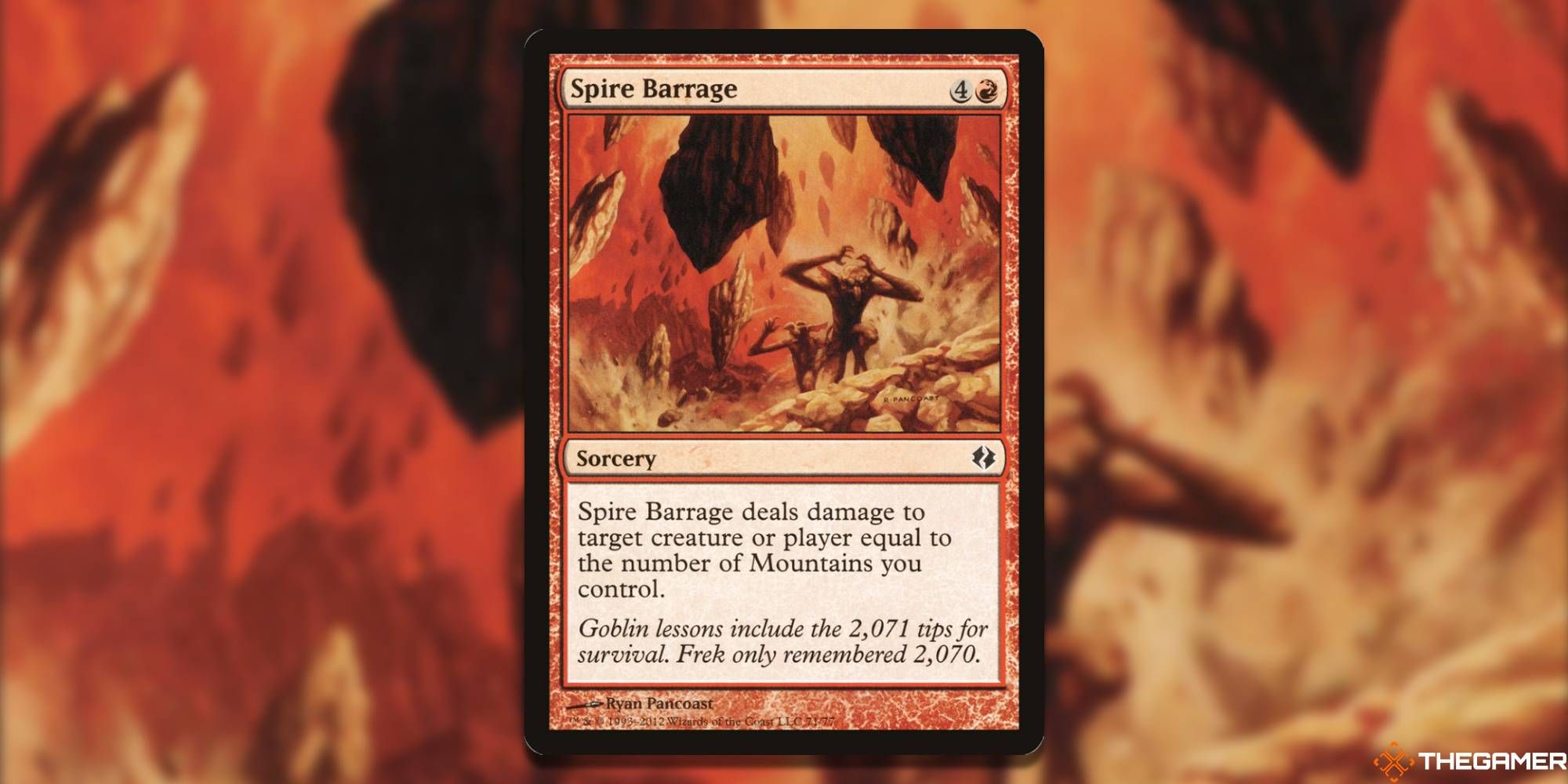 Text: Goblin lessons include the 2,071 tips for survival. Frek only remembered 2,070.

Never forget the 2,071st Goblin lesson. Do you remember what it is?

Frek did not remember, and he paid for it with his life. Frek had friends, family, kids. Frek was set to retire from spelunking the very next week. This is part of Magic’s canon. Remember Frek. And remember the 2,071st! 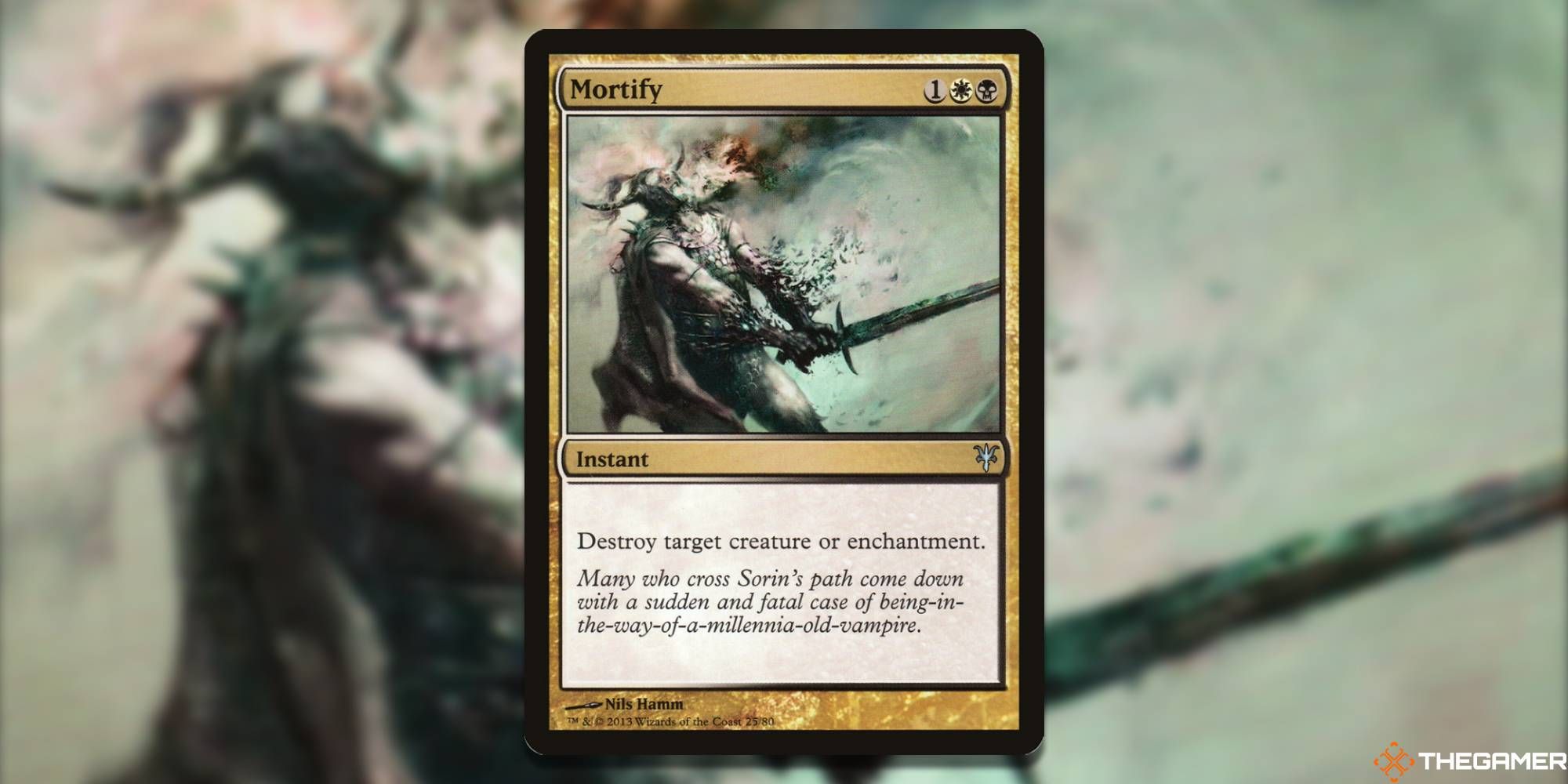 Text: Many who cross Sorin’s path come down with a sudden and fatal case of being-in-the-way-of-a-millennia-old-vampire.

Ancient vampire planeswalker Sorin Markov instantly became a fan favorite upon introduction in Zendikar. His style and panache, the long white hair and gothic gear — it’s all slick. Sorin even gets the narrator to give him free clout.

Mortify is among the most efficient removal Orzhov (Black/White) gets, instantly taking out creatures or enchantments at only three mana. Recall the definition of the word “mortify” is closer to humiliate than destroy. 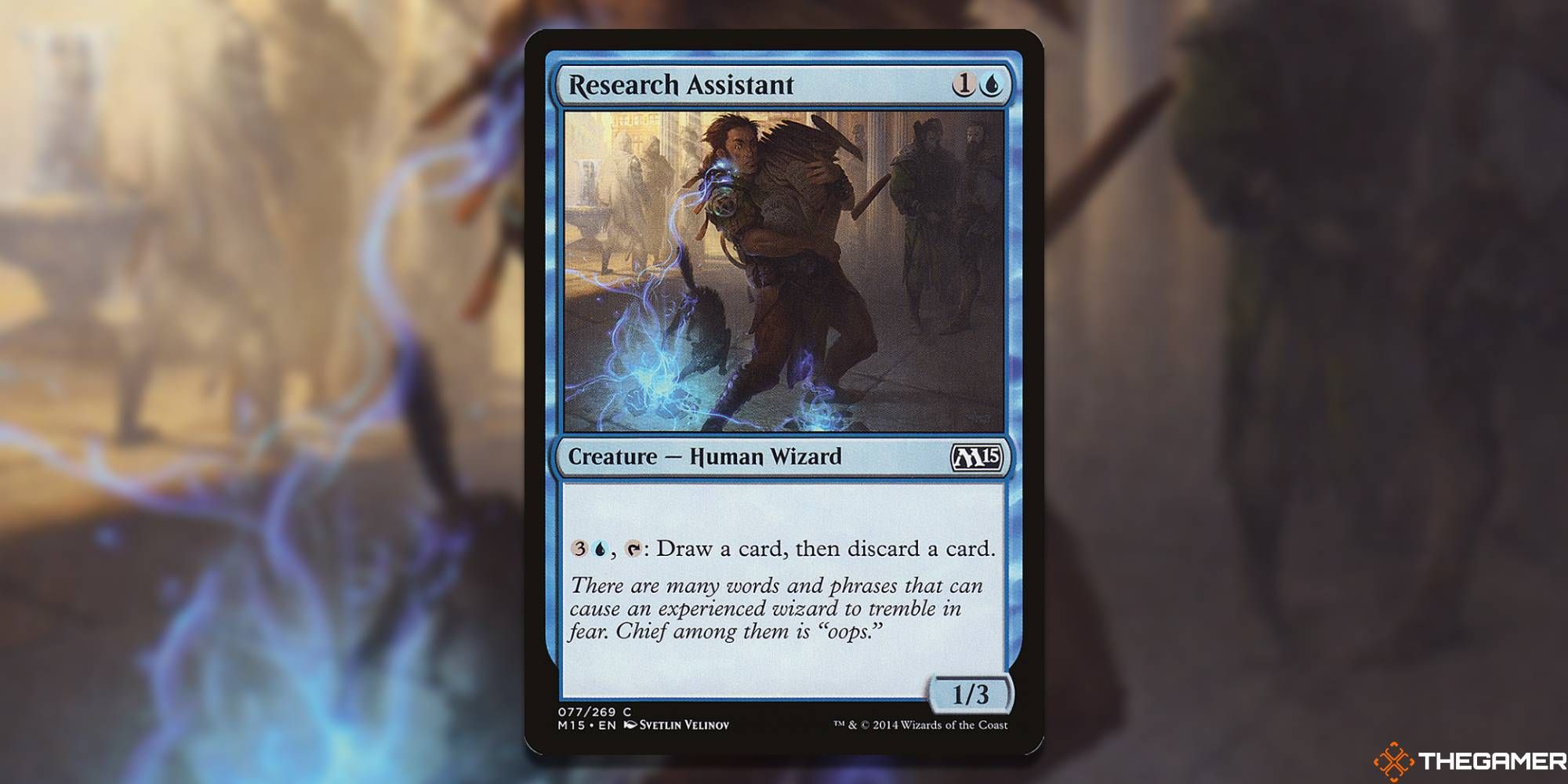 Text: There are many words and phrases that can cause an experienced wizard to tremble in fear. Chief among them is “oops.”

The median wizard in the world of Magic is always on the verge of chaos. Just like the player, much of their success is based on the random element of the game.

Research Assistant provides a 1/3 looting engine for the blue player. Just be careful what you discard. You may not realize it now, but you could end up needing that card later. That’s the “oops” every planeswalker wants to avoid.