Marcy Regina Wu says poggers. Of course she does. She is Amphibia’s nerdiest little cinnamon roll, constantly expressing her love for niche JRPGs, classic anime, and tabletop sessions with her closest friends. With the upcoming launch of her journal, fans have been learning more and more about her character that was never revealed in the show itself.

When I published my review I accidentally sent the fandom into a sapphic meltdown due to all the pages I showcased featured Marcy fawning over her friends' cool outfits and fashionable looks. Marcy was all but worshipping Anne Boonchuy and Sasha Waybright as she obsessed over the latter’s cerulean eyes and celebrated the former’s newfound aura of confidence around her found family. Unveiling these little details and seeing so many fans lose their minds was delightful, and so many secrets are still waiting to be uncovered.

Ignoring the fact that Marcy’s closet is so clear it’s made of glass, her journal is also the most comprehensive glimpse we’ve ever had of her character. The show didn’t properly introduce her until the second season – except for cameos and flashbacks – but by showing the entire story from her perspective with such a personal flair almost makes it a retelling of past events with a far nerdier edge. Marcy often describes herself as an outsider in the real world, acting as if her friendship with Anne and Sasha was a rare coincidence instead of the result of who she is as a person. Such insecurities are so common in neurodivergent people, where conditions make it hard to establish bonds and believe we have ever been worthy of love in the first place. Journeying to Amphibia allows Marcy to finally earn that self-confidence, but it comes with self-inflicted costs that much of the journal spends time reconciling. Away from all the drama though, it’s also a nerdy delight. 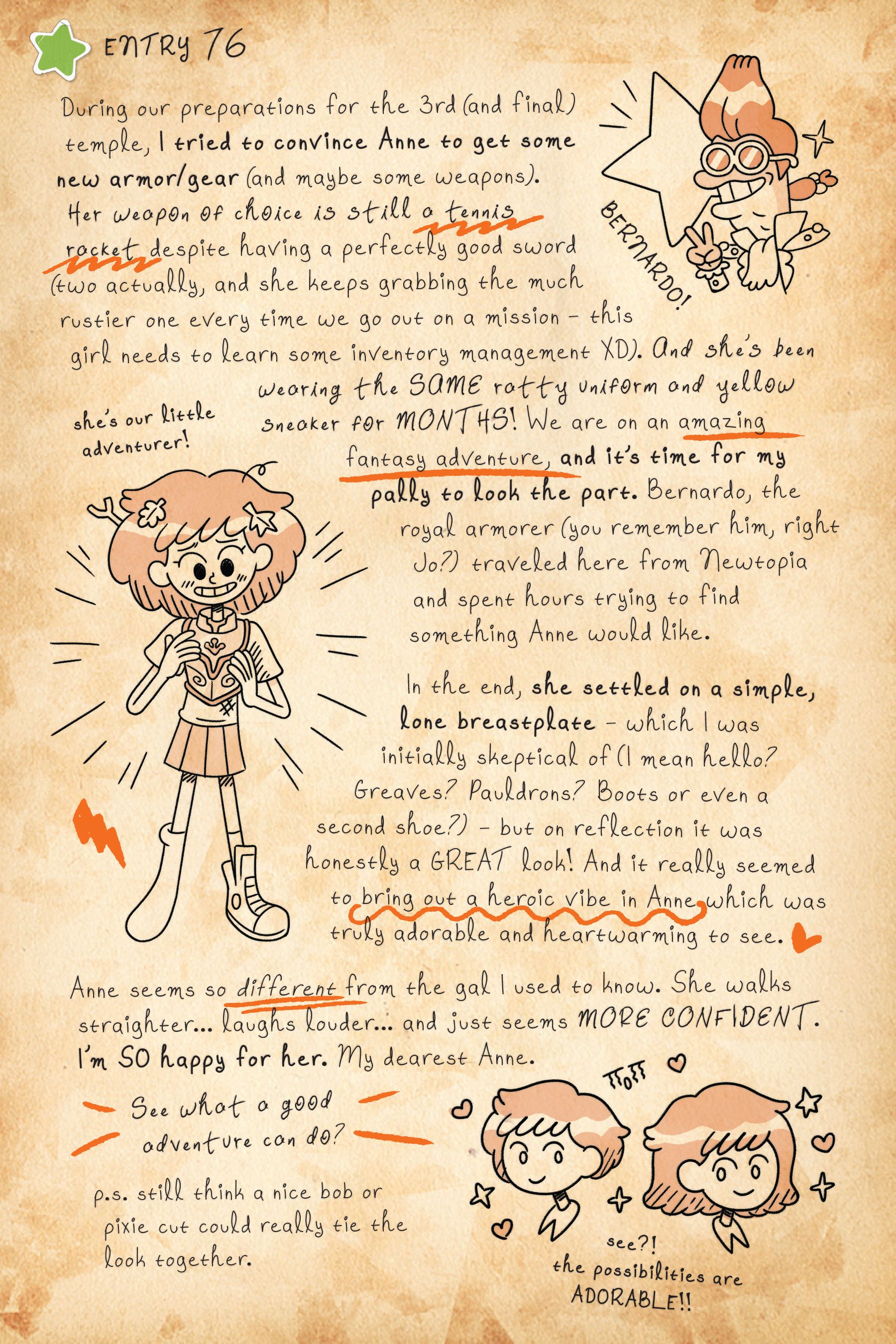 The majority of pages are a clear dedication to her zoomer creativity, with adorable doodles lining the paper’s edges as she spouts out memey catchphrases and depicts familiar emojis like she is filling in an impromptu tumblr blog from another world. Marcy is the exact kind of nerd to spout of phrases like “pog pog pog” and “yasss queen” when describing her friend’s looks and hobbies that excite her, because she was likely raised in an environment where those things were cool, and in her youth deserves to embrace them without ridicule. To see her in such a natural habitat is so much fun, and while she might appear hesitant in reality, the journal is a way to channel those inner thoughts and passions without compromise.

I grew up playing games like Final Fantasy and Dragon Quest while watching anime like Cardcaptor Sakura and Sailor Moon on the down low in fear my siblings might use it as an excuse to take the piss out of me for veering away from perceived normality. I made friends despite these unfair notions, establishing friendships that would stay with me for life whether I realised it or not. Marcy is in a similar boat, and this is precisely why so many fans love to resonate with her. We’re all fish out of water, unsure of our place in the world and whether those we surround ourselves with will truly appreciate who we are beneath the facade. 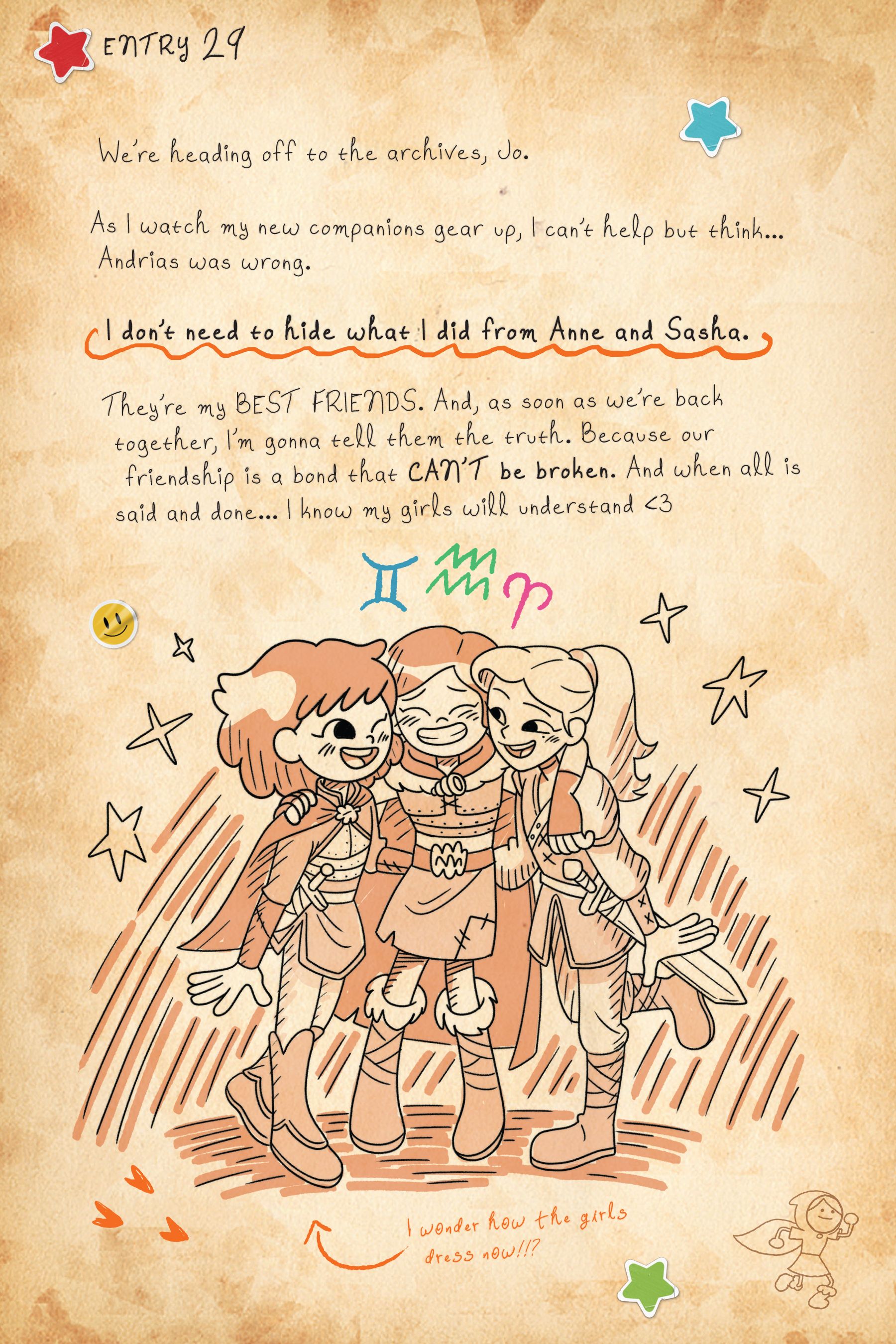 Marcy’s Journal walks that path and is never afraid to unpack these trials and tribulations amidst all the tongue-in-cheek hijinks, and somehow it walks the thematic tightrope with unparalleled grace. A chunk of the journal is told from Anne’s perspective, which I’ll be sure to dig into soon, but even that is introspective in how it reflects on Marcy’s actions and how she had only good intentions when bringing her friends over to Amphibia. She didn’t want to ruin their lives or strand them in a boggy wasteland, but was afraid their friendship wouldn’t endure over distance and time, so the only solution was to pull them into her own little world.

We’ve seen many moments where Marcy is over-exuberant in her emotions or lets the situation get the better of her, but deep down we know every word, every behaviour and every part of her is trying to do the right thing, to make people happier in spite of her own insecurities. The new friends she makes throughout the journey, and the missions she embarks upon to help those in need are a warm reminder of who she is, and to see her share all of these nerdy interests without an ounce of shame is a liberating delight.

Marcy is cringe, but she’s also a frighteningly accurate reminder of who we used to be as teenagers. As a kid I traced the Kingdom Hearts 2 box art and displayed it on the fridge and even practiced the Hare Hare Yukai from the Melancholy of Haruhi Suzumiya with my fellow anime nerds at school. We were all complete losers, but we were happy and tried not to care what people thought. Perhaps we’re cringing at Marcy’s unironic use of poggers because she is out here living her best life without fear of scrutiny. We stan a nerdy weeaboo queen.