In Mario + Rabbids Sparks of Hope, each Hero has their own signature weapon they wield in battle. These weapons each have their own unique attacks, ranging from some sort of close-range blast to long-distance blows. While the weapons themselves don’t upgrade in the game, they do gain a little extra power or range as the Heroes who use them level up.

Weapons, though, do get some customization in the game through weapon skins. There are a few variations of weapon designs, including Speedway, Steampunk, and Gleaming, each of which can be unlocked for every weapon. However, some skins and weapons go better together than others. If you’re looking to customize your weapon, you may want to prioritize these weapon skins in particular. 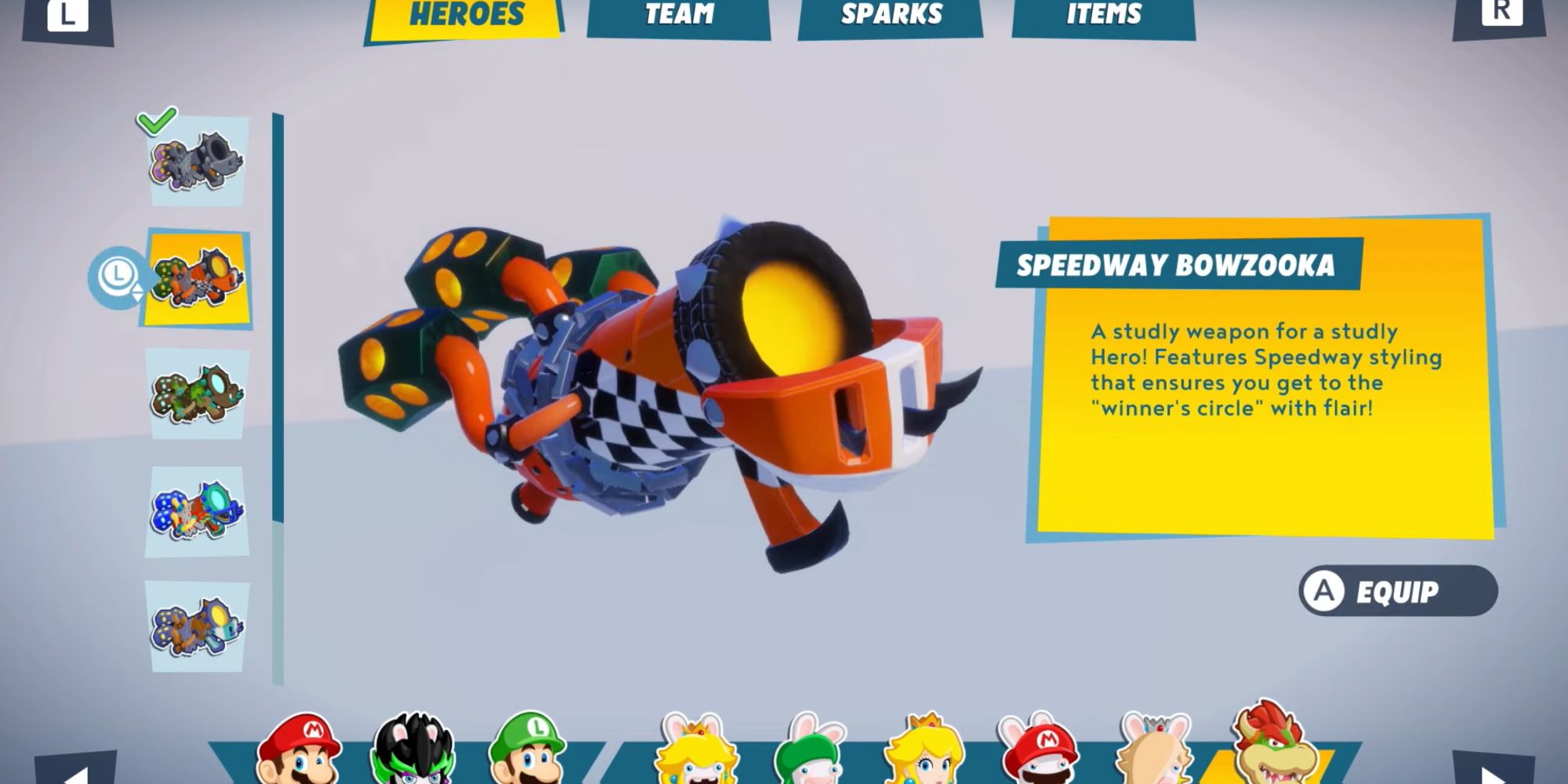 This weapon skin is one of the purchasable ones, available from the Barrendale Mesa for two Planet Coins, earned from completing side quests. 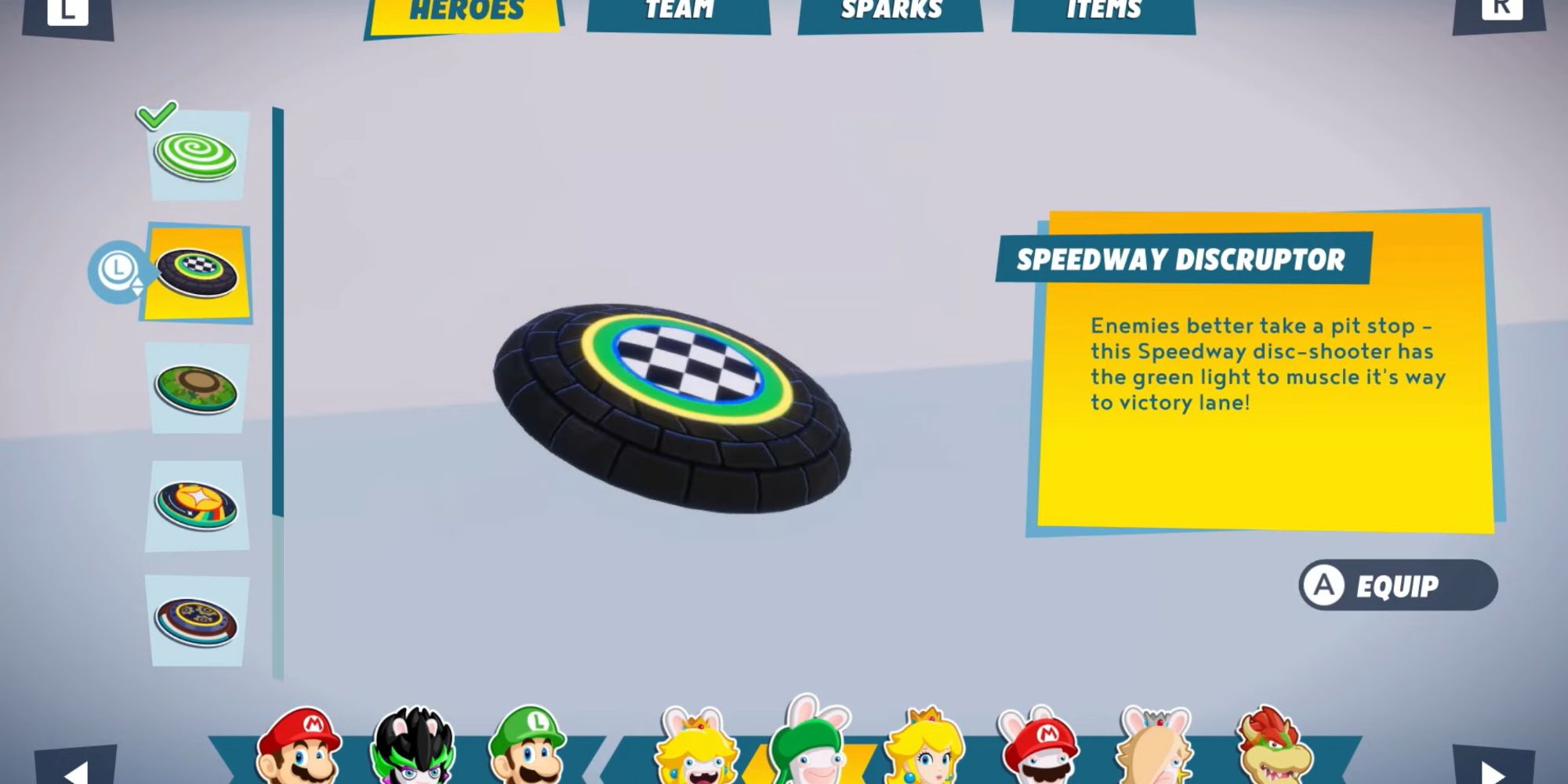 Rabbid Luigi’s aspirations to be a DJ make his Discruptor, a frisbee-turned-weapon, the perfect item for him to wield. It strikes multiple enemies with a single throw. Most of the weapon skins for the Discruptor look fantastic, but the Speedway skin in particular puts a fun spin on this gun.

The Speedway Discruptor looks exactly like a race car wheel, the coolest design choice for a circular weapon. You can get this skin from the Terra Flora Salesbot for two Planet Coins. 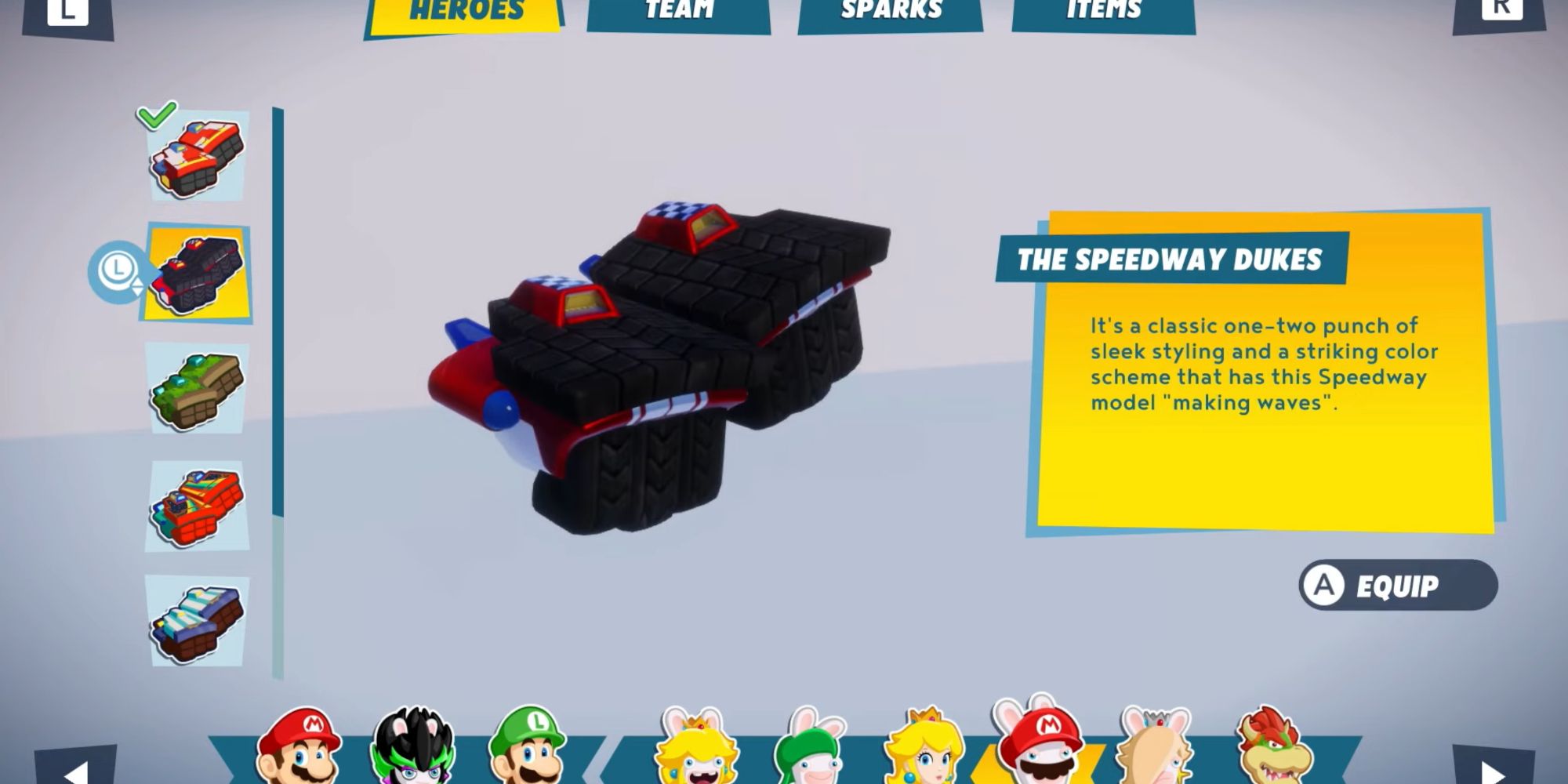 Rabbid Mario resorts to fisticuffs in battle, using The Dukes, a powerful pair of gloves that pack a mean punch. One of the best weapon skins The Dukes has is the Speedway skin, which gives the weapon a sporty look. The fingers of the gloves look like tires, making it look as if Rabbid Mario is wearing a small monster truck on each fist.

The Speedway Dukes are relatively easy to come by, available for purchase in Beacon Beach for two Planet Coins. 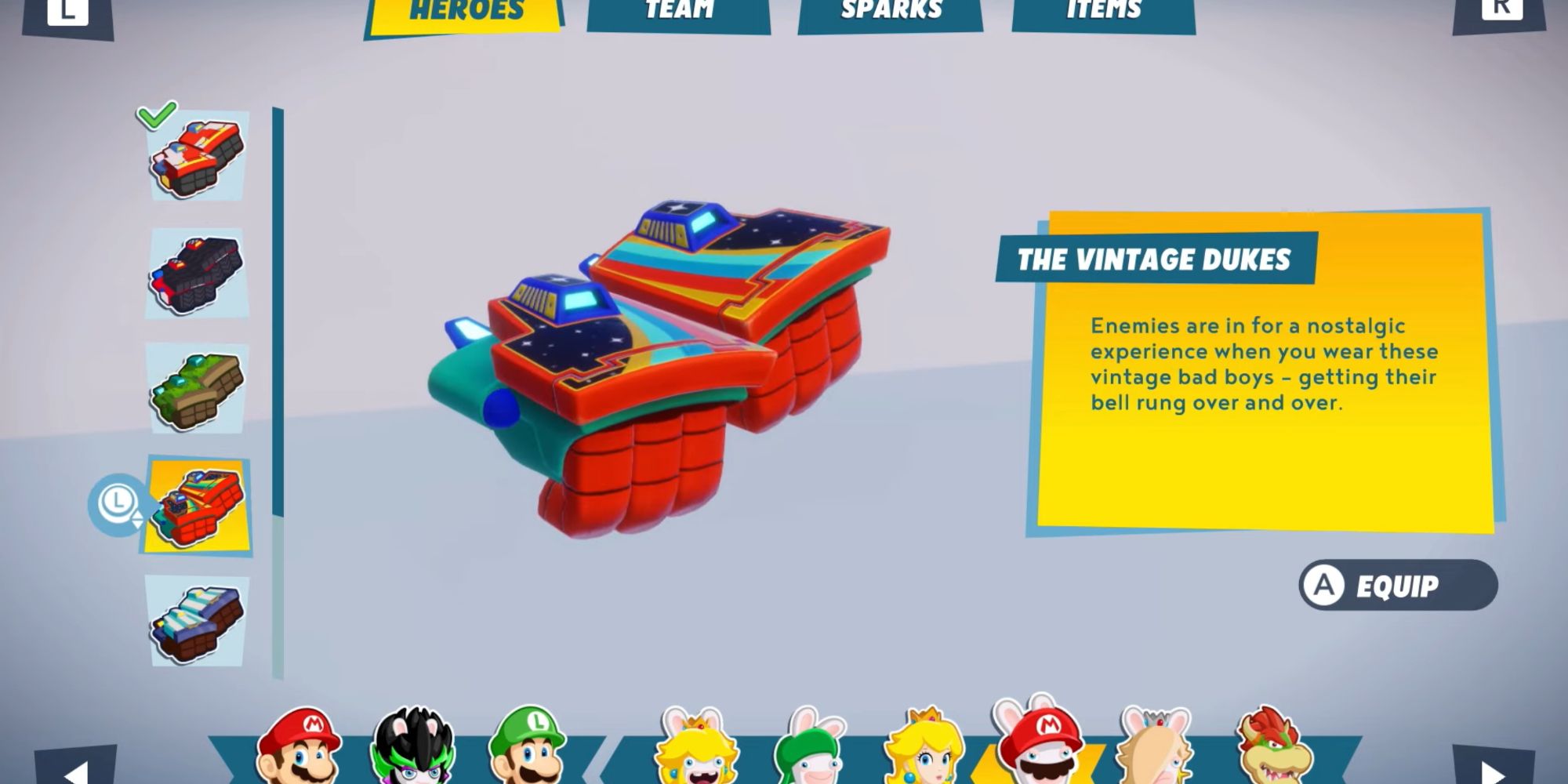 The Speedway Dukes isn’t the only skin that looks epic with Rabbid Mario’s weapon of choice. A close tie is The Vintage Dukes. The Vintage skin set across all weapons uses a mix of teal, red, yellow, and other bright colors in a lively, old-school pattern. For Rabbid Mario, the Vintage Dukes suit him as it emphasizes the color red in its design.

The Vintage Dukes can be found in Pristine Peaks, purchasable from the Salesbot for two Planet Coins. 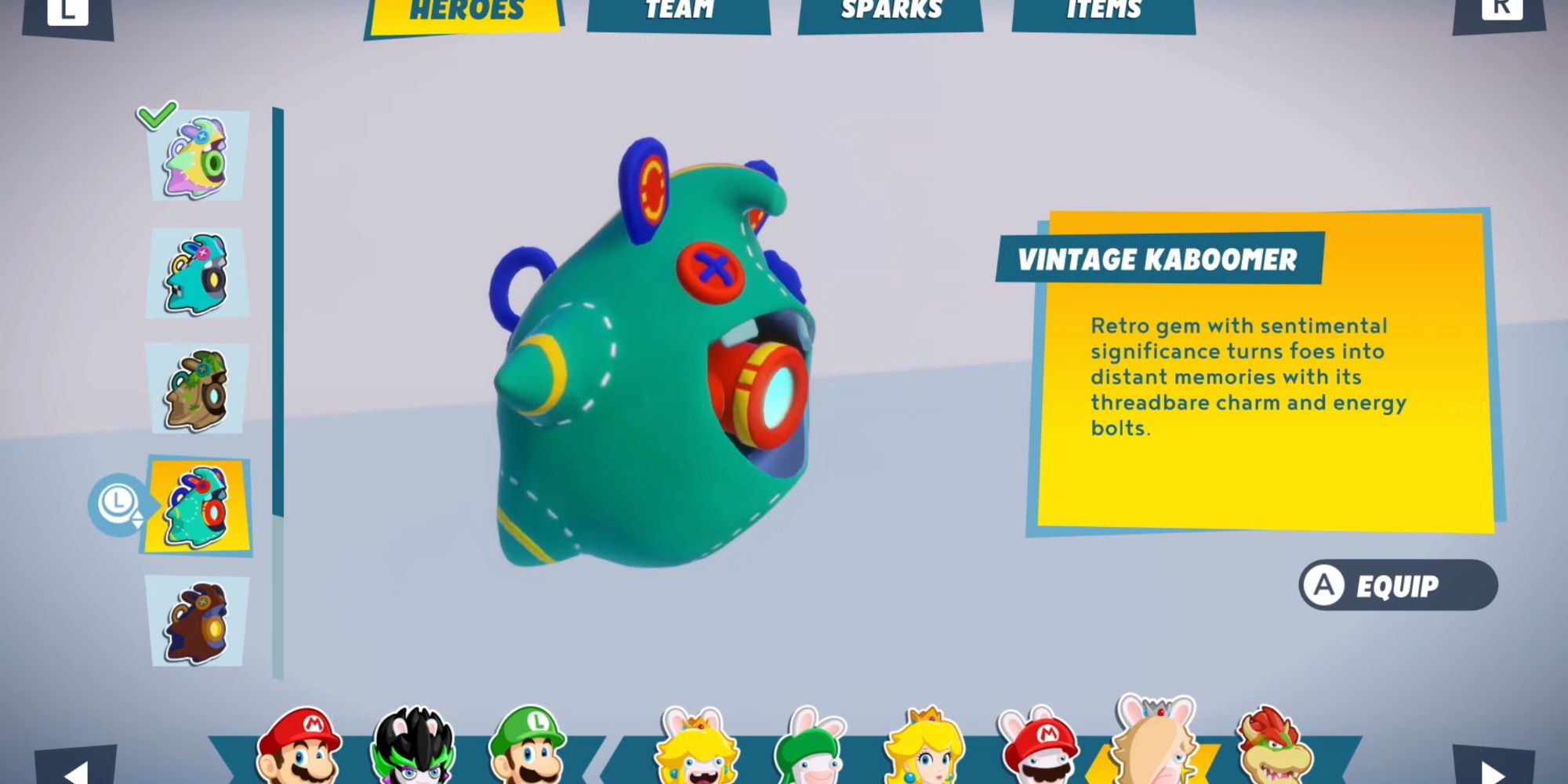 The Kaboomer is Rabbid Rosalina’s weapon of choice and proves that looks can be deceiving, as the weapon is a stuffed Luma with a cannon inside. It lets out a series of shots on a single enemy. The weapon skin that works the best with Rabbid Rosalina’s gun is the Vintage Kaboomer.

The bright colors of this alternate look pair well with the stuffed animal weapon, and gives the Kaboomer a teal color similar to Rosalina’s dress. It’s available for two Planet Coins in Palette Prime’s shop. 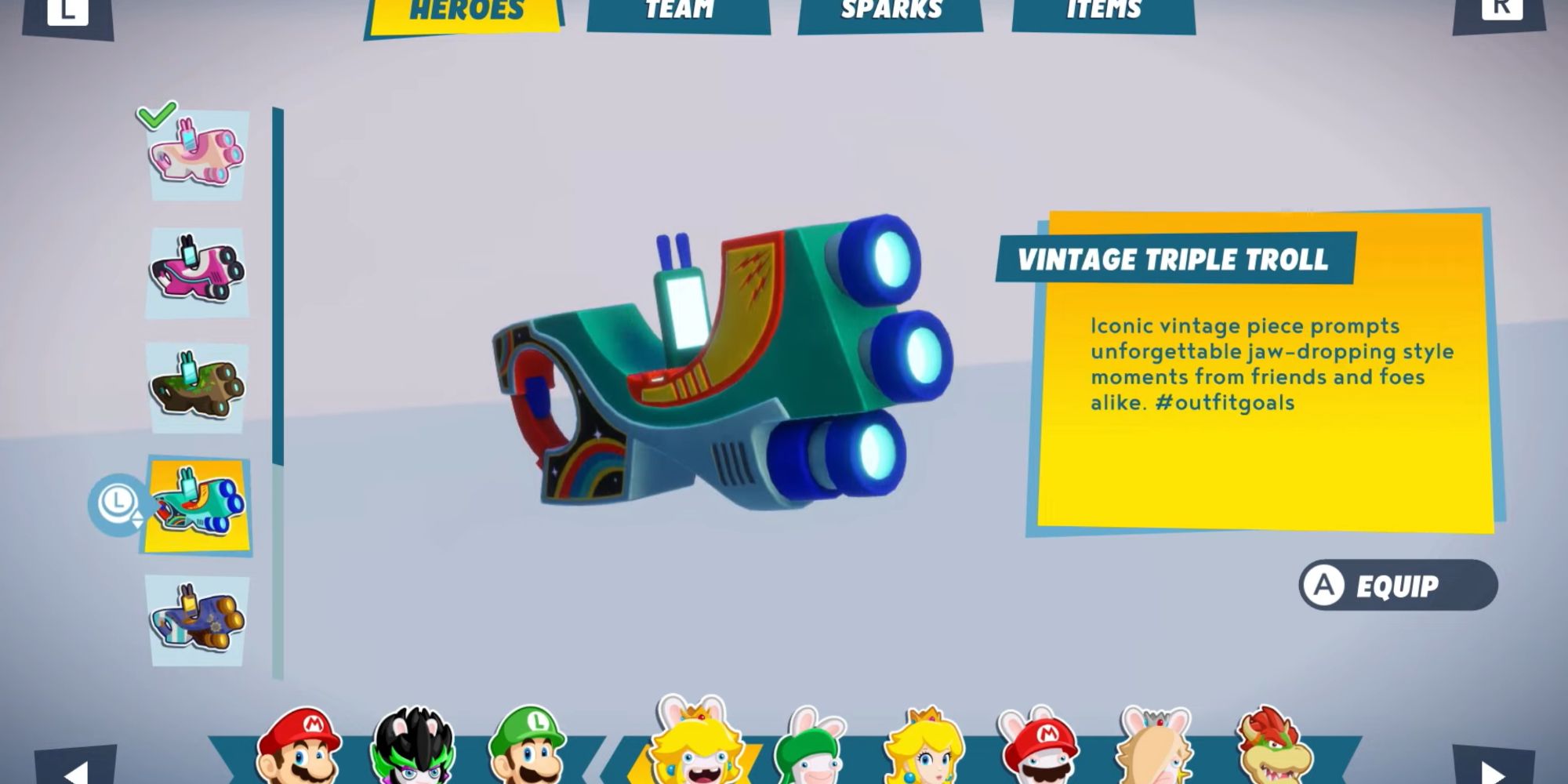 Rabbid Peach’s weapon is the Triple Troll, a rocket launcher that fires on a single enemy three times in succession. It’s the ideal weapon for her with its aggressive attack style. While its default pink and white coloring matches her outfit perfectly, the Vintage Triple Troll is an ideal alternate look for her weapon. Its bright colors would appeal to Rabbid Peach, who is a bit of a fashionista.

To get the Vintage Triple Troll, you need only visit the Beacon Beach Salesbot and purchase it for two Planet Coins. 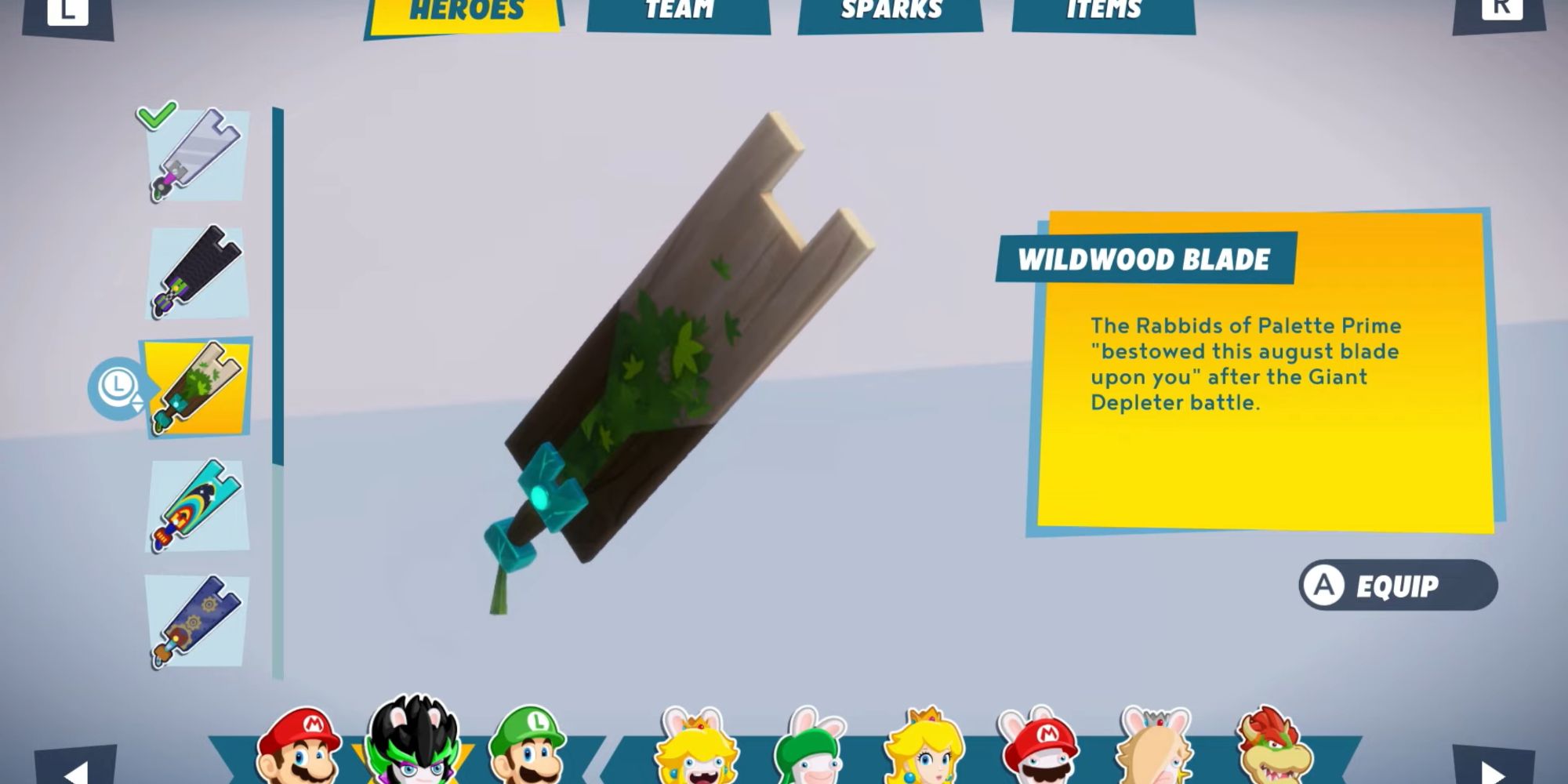 Fierce Edge, the new Rabbid character who joins your party, fights with a rectangular Flying Blade. The Wildwood weapon skin uses wood and leaves in its designs to give weapons a natural yet rugged look. This rougher design fits Edge’s bristly personality quite well.

Finding the Wildwood Blade takes effort, as it’s one of the treasures associated with a side quest. To get this weapon skin, you’ll need to head to Palette Prime and beat the Closing the Gap quest. 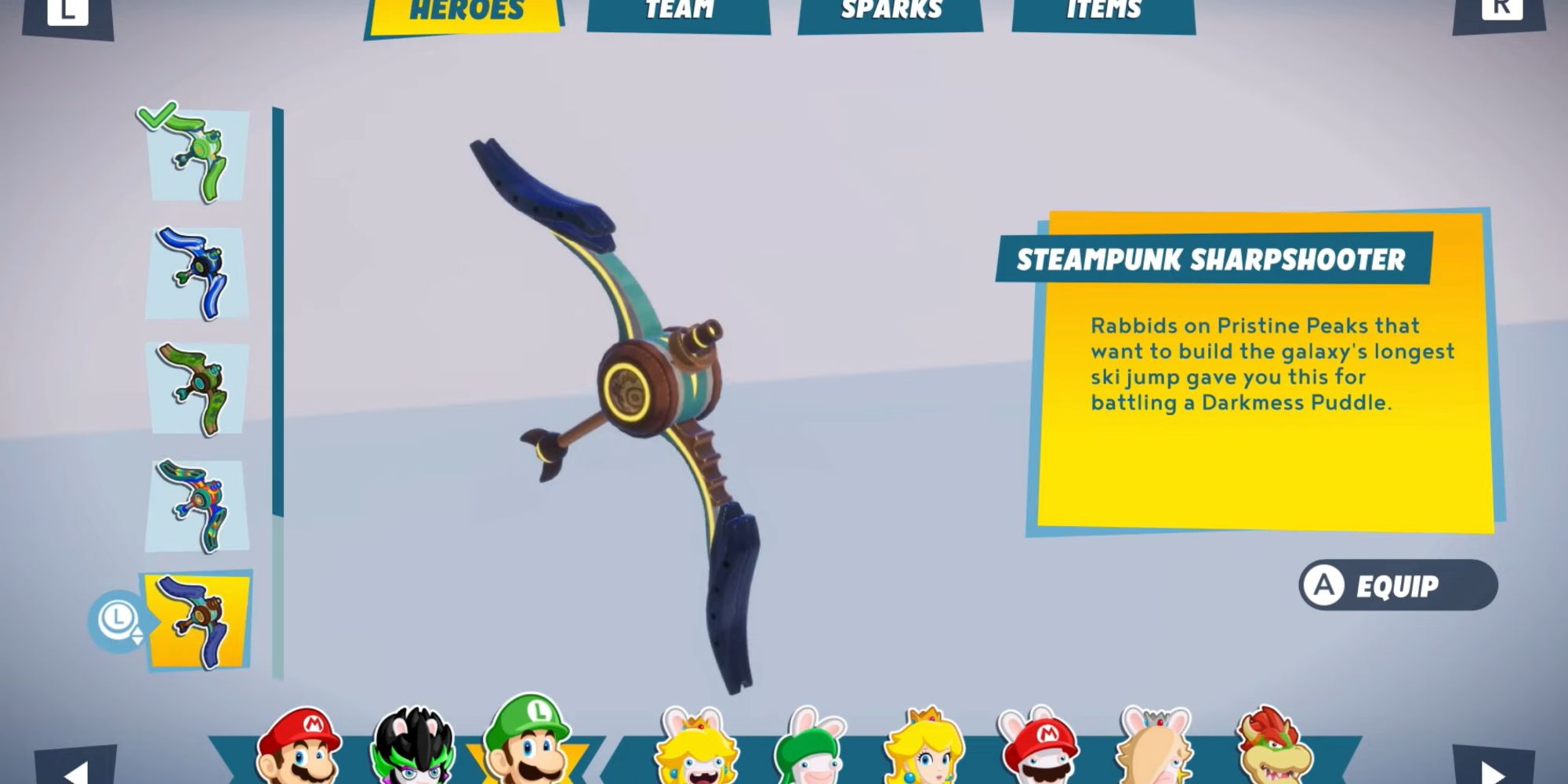 To get this weapon skin, Luigi will need to team up with Mario in the Brothers in Arms side quest in Pristine Peaks. The Steampunk Sharpshooter is the reward for completing that battle. 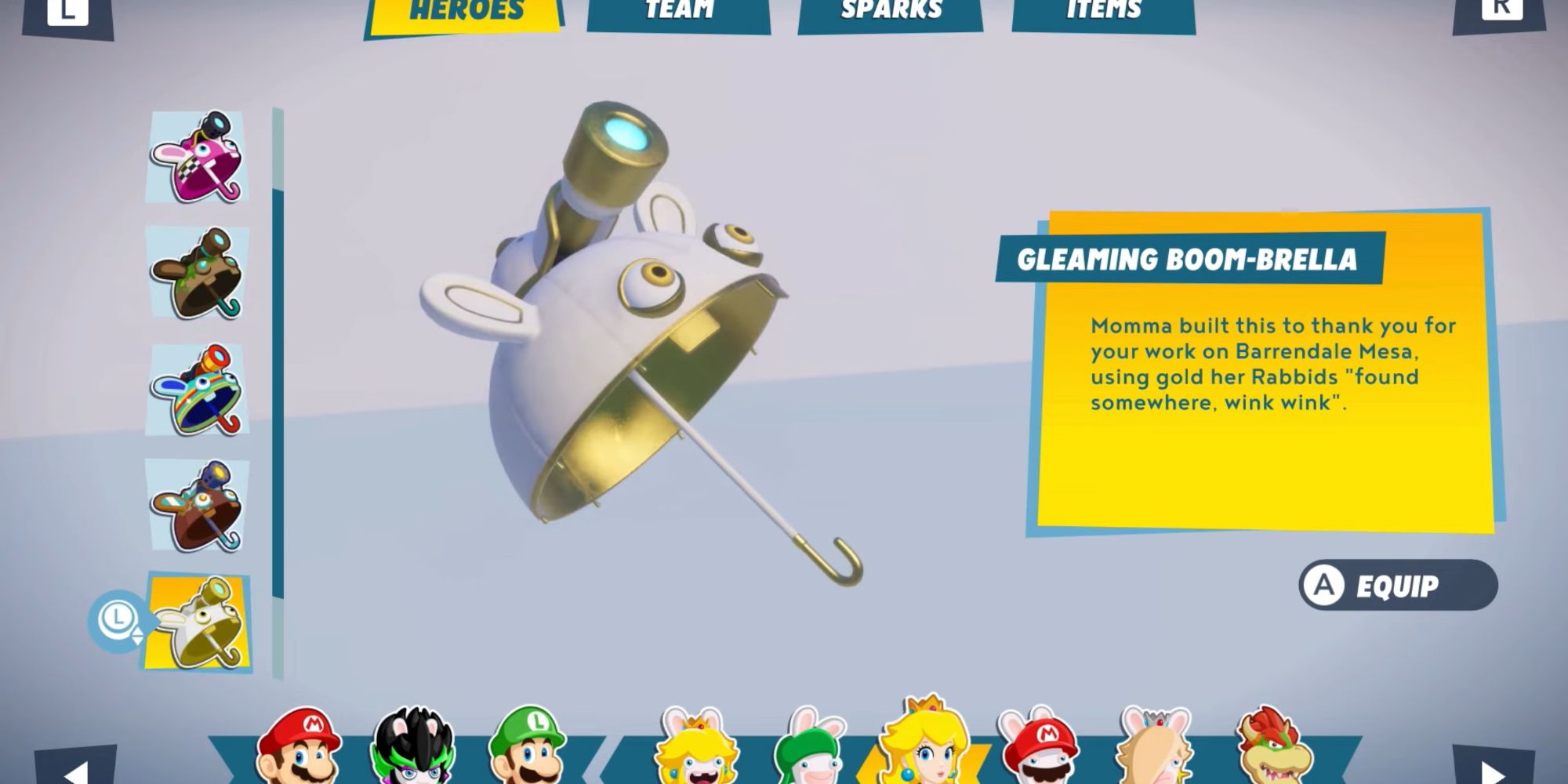 Princess Peach’s Boom-Brella is the ideal weapon for her, a creative play on her signature parasol. Though the default design is perfect for Peach, the Gleaming weapon skin is a great alternate look for the Boom-Brella. Its white and gold color palette makes it seem similar to Peach’s usual parasol and gives the weapon a touch of elegance suiting the ruler of the Mushroom Kingdom.

Getting the Gleaming Boom-Brella is a bit of a challenge. You unlock it as a reward once you complete all side quests in Barrendale Mesa. 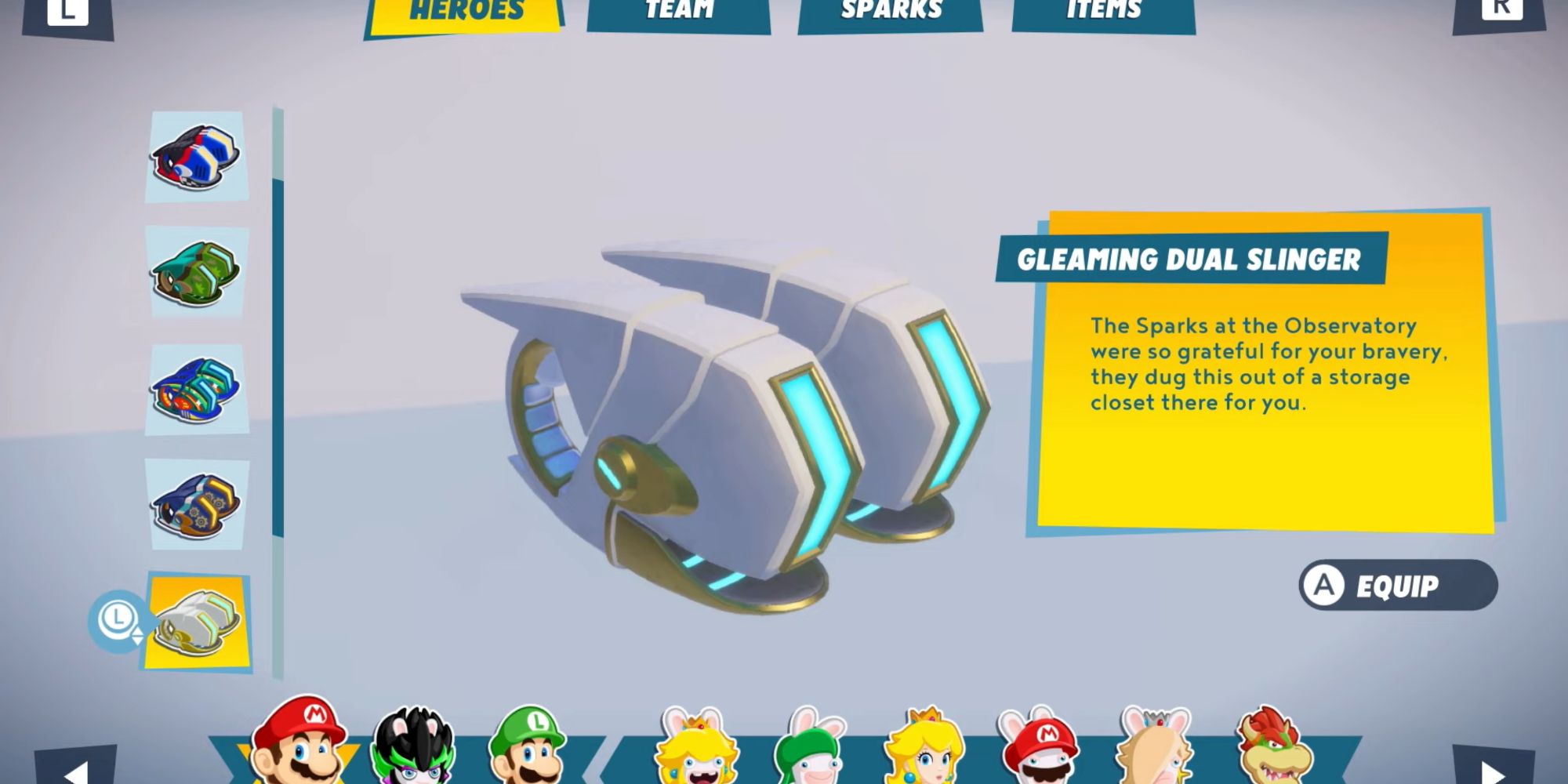 Mario’s Dual Slinger is one of the best weapons in the game, an asset in battle since it allows you to get two shots in on a single turn. The Gleaming Dual Slinger in particular has an elevated style that suits the Mushroom Kingdom’s greatest hero.

You’ll have to wait a while before you can earn this weapon skin, though. You unlock the Gleaming Dual Slinger as the reward for earning 100 percent on Cursa’s Stronghold, which occurs naturally as you take on and beat the final boss of the game.