Side quests are one of the best parts of games, as they help bring the world to life, feature quirky NPCs who can’t fit into the main storyline, and give you great opportunities to gain experience or other rewards. In Mario + Rabbids Sparks of Hope, the optional quests in each world accomplish just that.

Over the course of your main story quest in Sparks of Hope, you travel to five unique worlds. From Beacon Beach to Terra Flora, there’s no shortage of optional quests to take on. Most of the best quests also let you unlock a new Spark as a reward, though some are simply fun because of the team-ups and challenge. 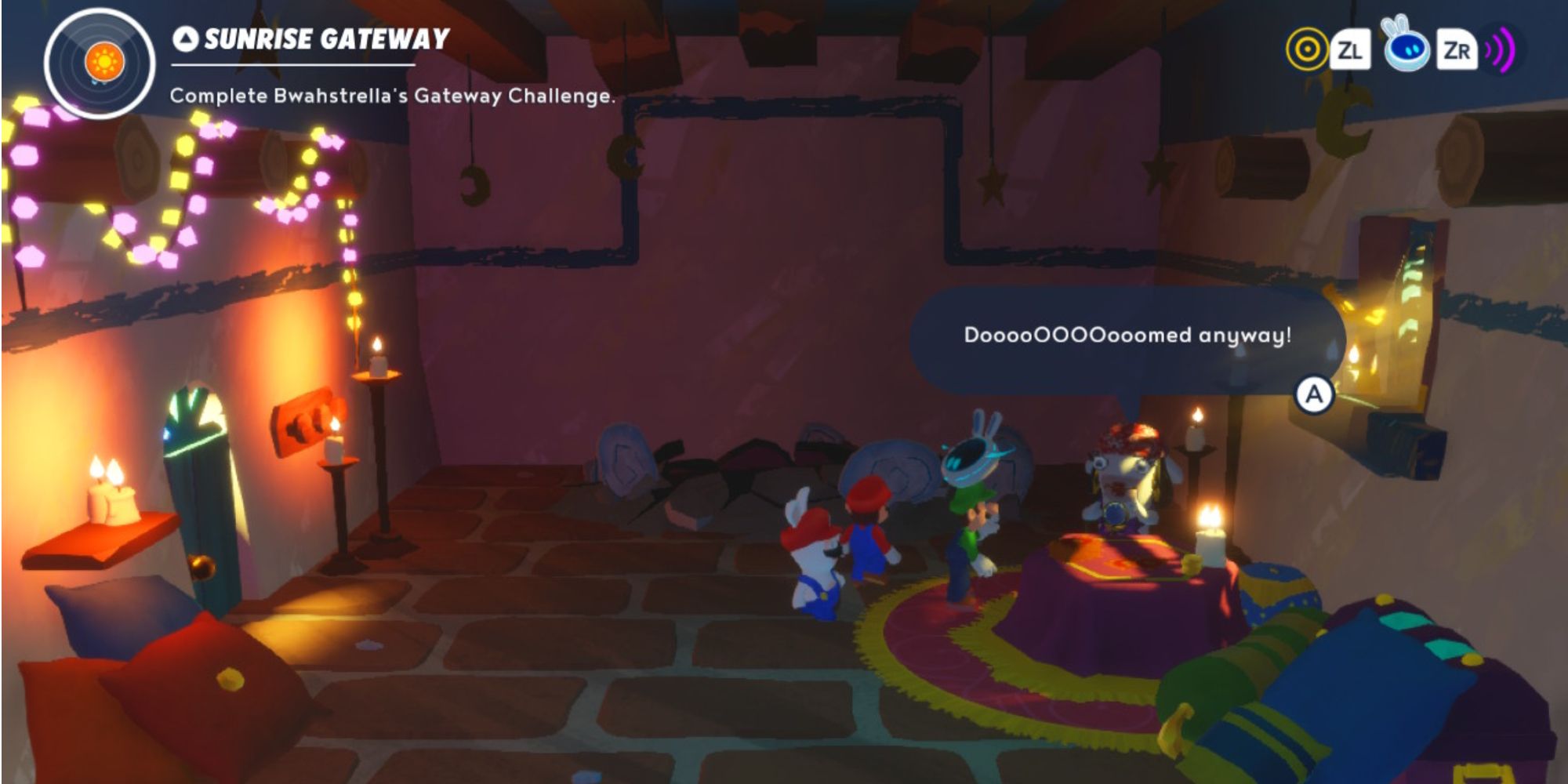 Sunrise Gateway is the first of a series of “Gateway” quests found across the Sparks of Hope realms, which transport you to a battlefield to take on a large quantity of enemies. This first one is a little tricky to find, hidden from you until you find the fortune-teller Rabbid Bwahstrella’s home in the town.

In this first side quest challenge, you take on 48 enemies, most of them Goombas. While all the enemies have low health amounts, the sheer amount of them makes the battle difficult. 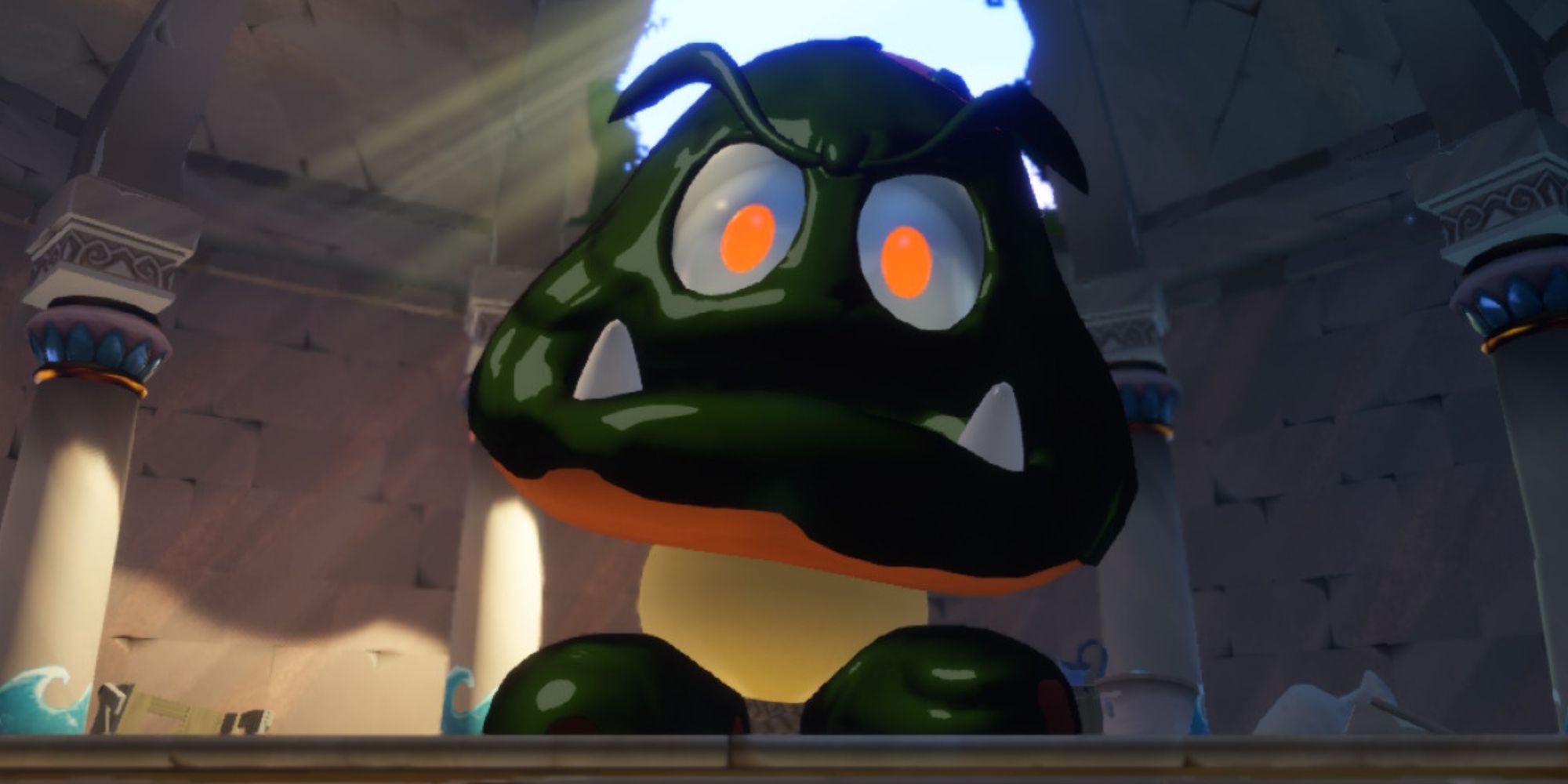 A Truly Ginormous Goomba is an accurate name to describe one of the hidden enemies you’ll come across in Sparks of Hope. To access this side quest, you’ll have to return to Beacon Beach after progressing deeper into the game. You can find this giant Goomba, covered in Darkmess slime, through a Golden Pipe after you collect at least 12 Sparks.

It’s hilarious to take on a Goomba of immense size, and the reward you win is well worth the trouble. Beating this massive Goomba awards you with a Gold Prism, which lets you unlock the Spark Branch of any Hero’s skill tree. 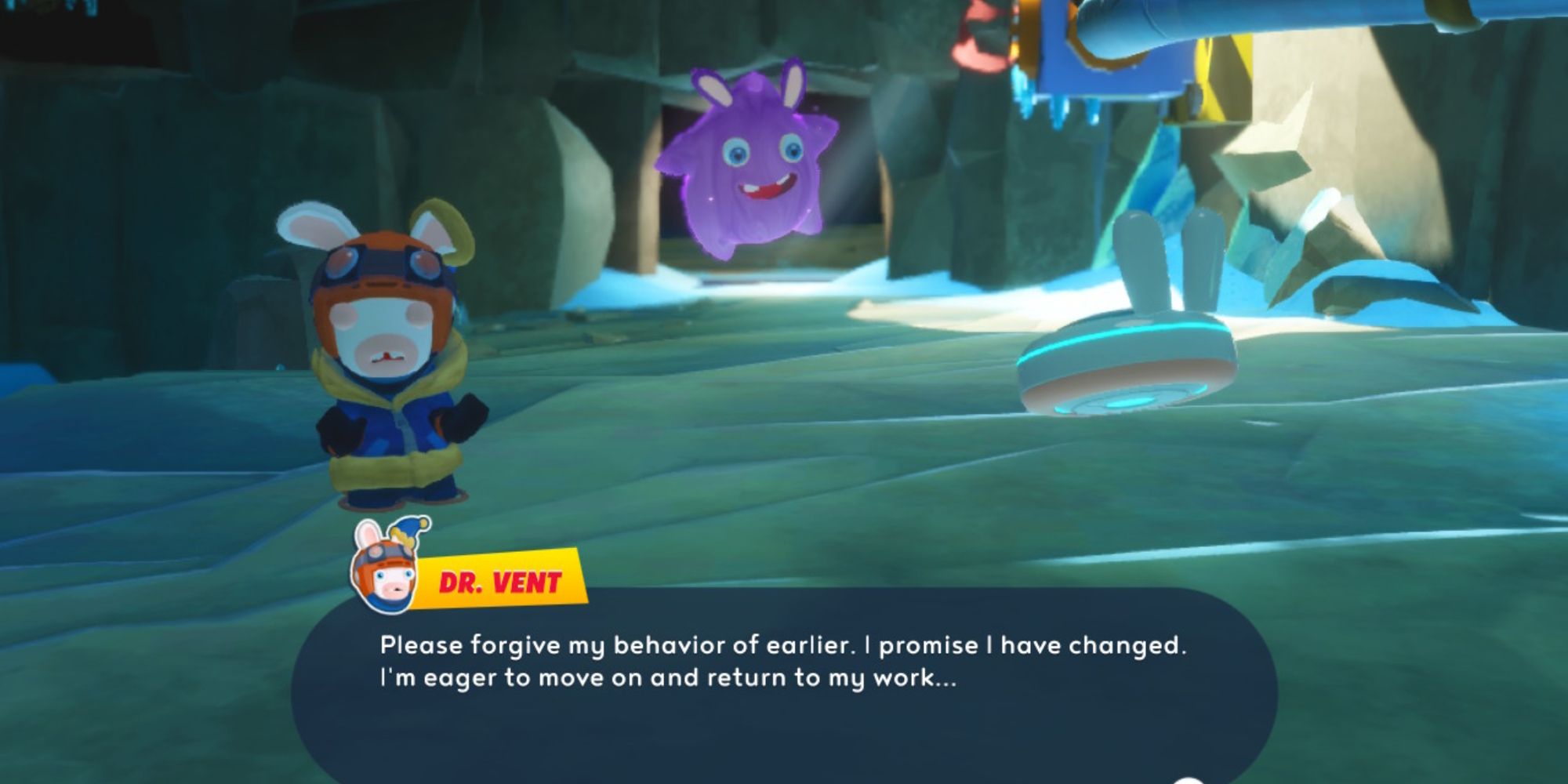 Dr. Vent’s Frozen Oddity is one of Pristine Peaks’ Spark Quests. While the quest is fairly short and straightforward, requiring you to delve into an underground cave, it concludes with a fun battle that requires you to manoeuvre a bomb down a windy path to win. The quest’s storyline is also quite funny, as it features a mad scientist with memorable dialogue.

The reward for this quest is the Spark Zephystar, who adds a Gust damage boost to your attacks. This quest can be achieved while you’re on the main quest in Pristine Peaks, as it’s conveniently on the way to a main quest destination. 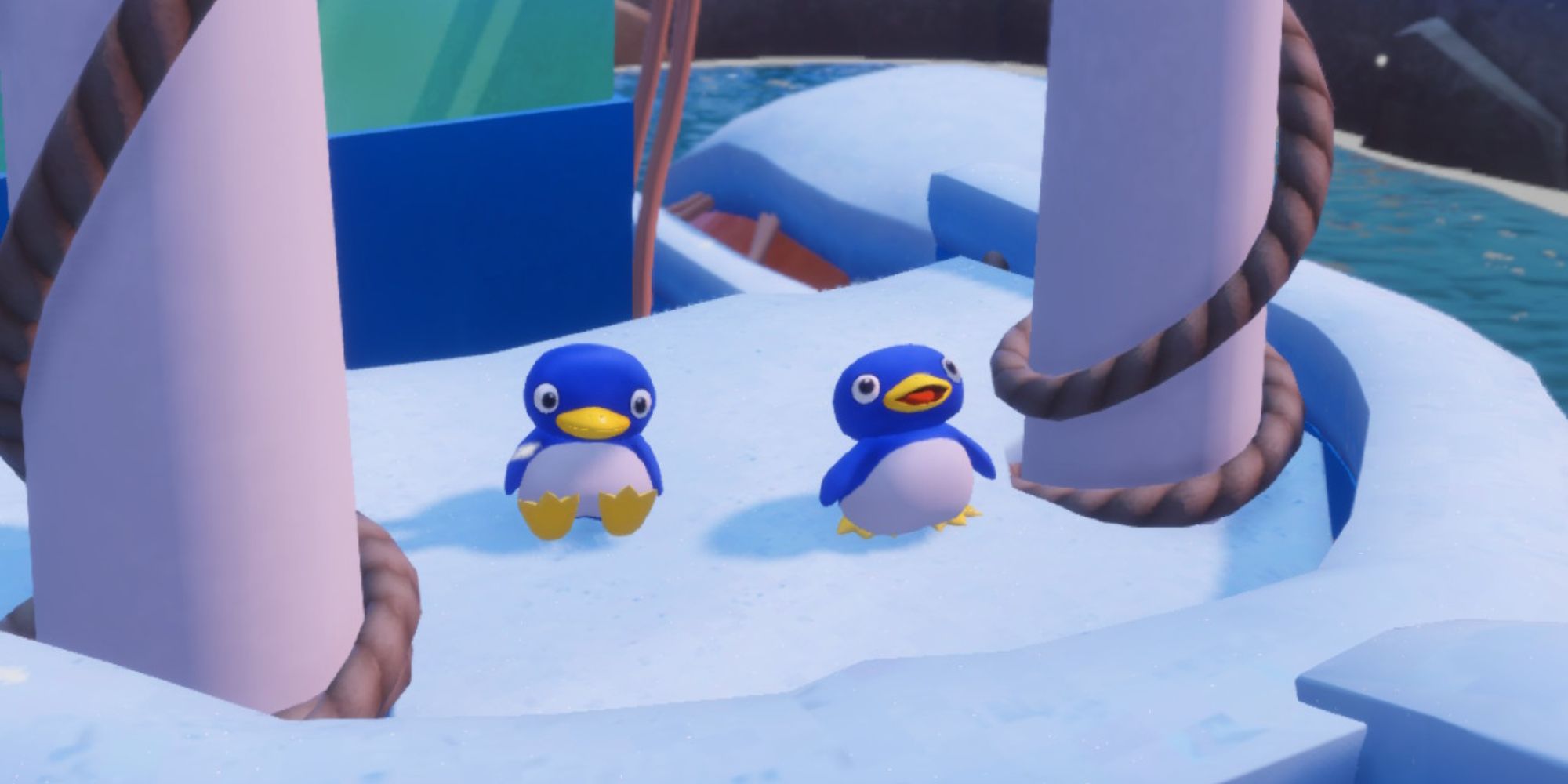 One of the most adorable side quests in the game, Hide N’ Squeak involves tracking down three adorable penguins to help out Regenesis, the Spark you gain for completing this quest. The penguins are relatively near their destination, and the final battle for the mission simple enough to tackle, as long as you’re at least Level 15.

You can embark on this Spark Quest immediately after completing the main quest on Pristine Peaks, and it’s a good idea to knock it out before leaving. Regenesis is one of the few Sparks with healing abilities and is thus a necessity to have equipped on your team. 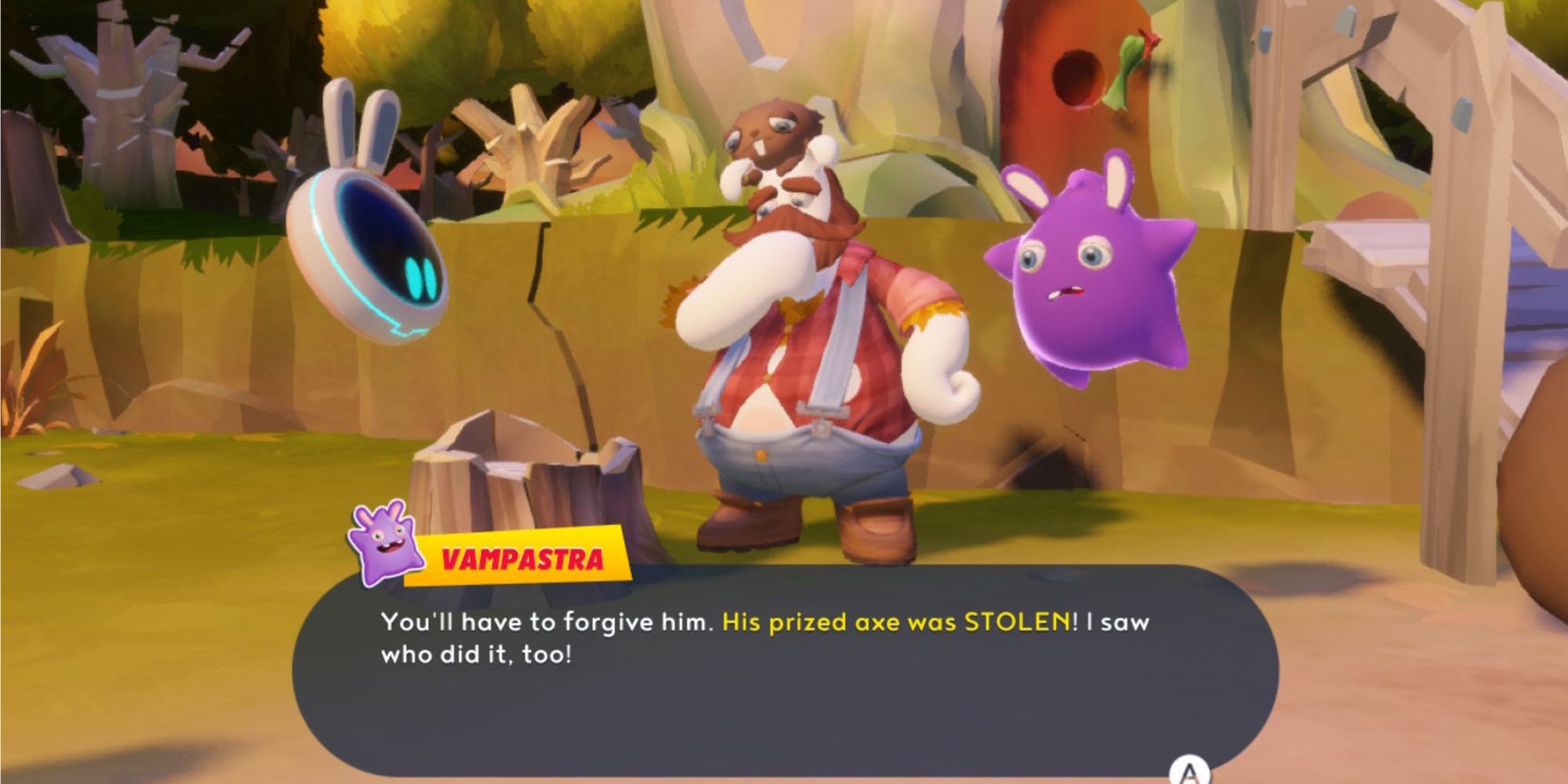 Looking for a mystery to solve? Bury The Hatchet, one of Palette Prime’s optional Spark quests, requires you to put on your best sleuthing skills. You’ll wander around the village in search of Sweetlopek’s stolen axe. The quest adds more character to the Fall-themed world and allows you to meet several quirky Rabbids who live there.

The quest’s reward is the Spark Vampastra, who is a tremendous asset to your team. This spark boosts the damage you inflicts and siphons health from other enemies to heal you.

5/10 Palette Prime: The Princess And The Prima Donna 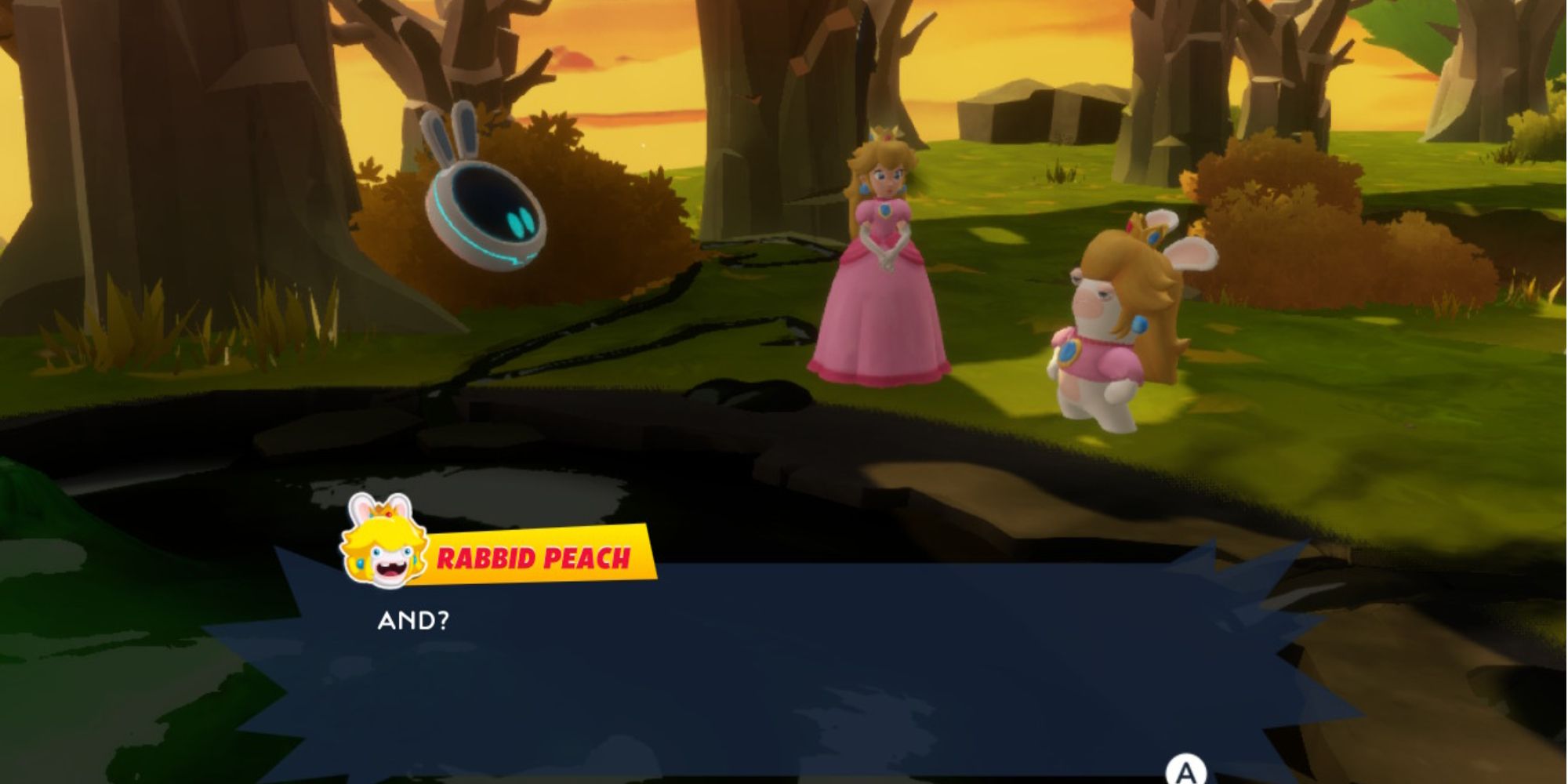 A few of the side quests in Sparks of Hope requires you to engage in a battle as a specific duo of characters. The Princess And The Prima Donna is one of the best examples of this type of optional mission. In this battle, you play as Peach and Rabbid Peach and must survive through several rounds to achieve victory.

These two Heroes are better suited for defensive moves than offensive, which makes outlasting your enemies a fun challenge. Plus, it’s a great girl power moment! 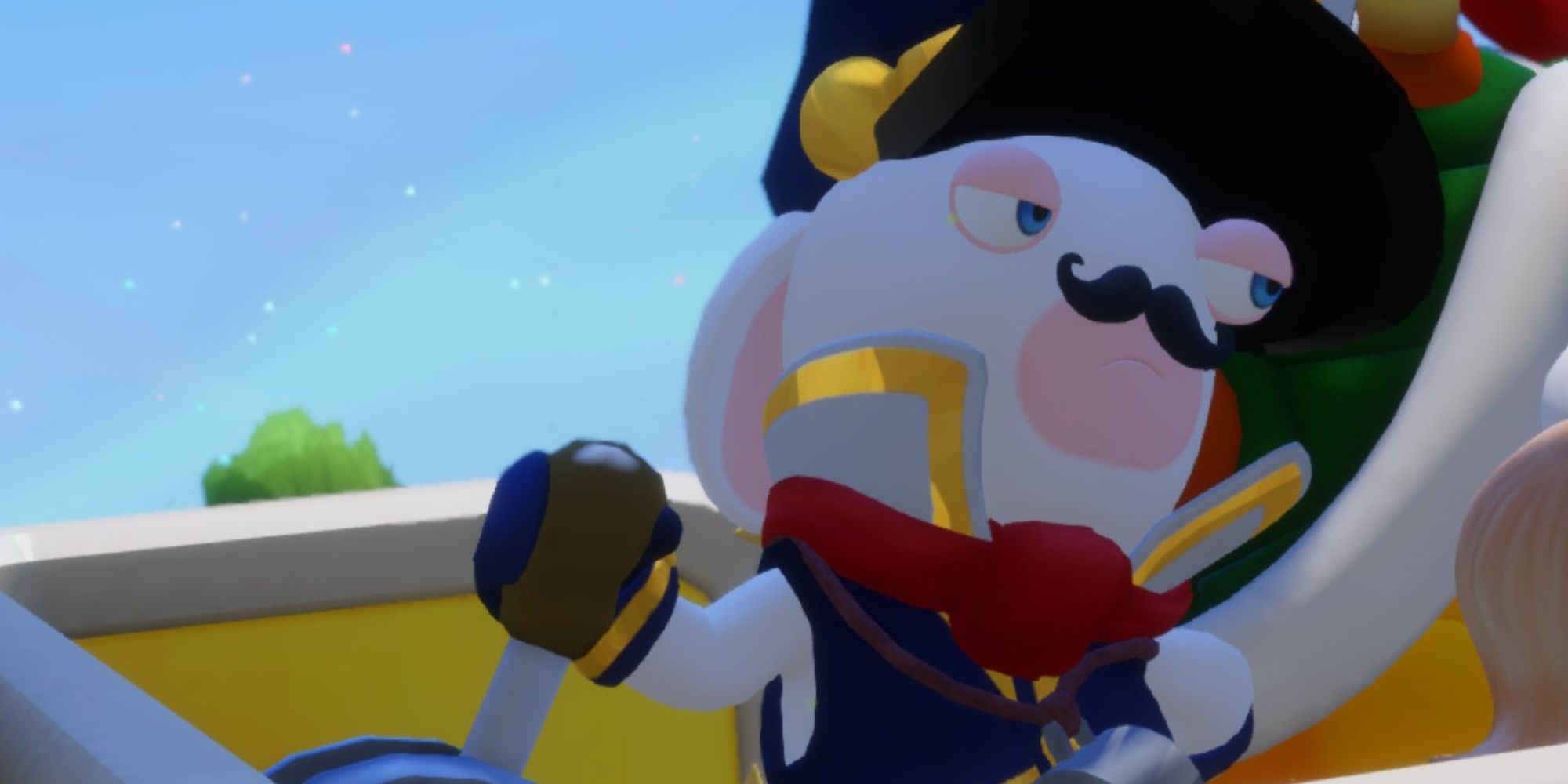 Sullivan is one of Terra Flora’s residents and by far the most helpful NPC you come across in the game. He’s a train conductor who gives you a ride during the main quest, so it’s only fair to return the assistance by helping him restore his train track, which is the goal of the side quest Sullivan’s Despair.

This optional mission involves removing the thorns entangling the train tracks and cleaning up more Darkmess through battle. The prize for completing the mission, other than Sullivan’s eternal gratitude, is Oozer Master, a Spark that allows you to summon an Oozer Ally.

3/10 Terra Flora: The Quest For Courage 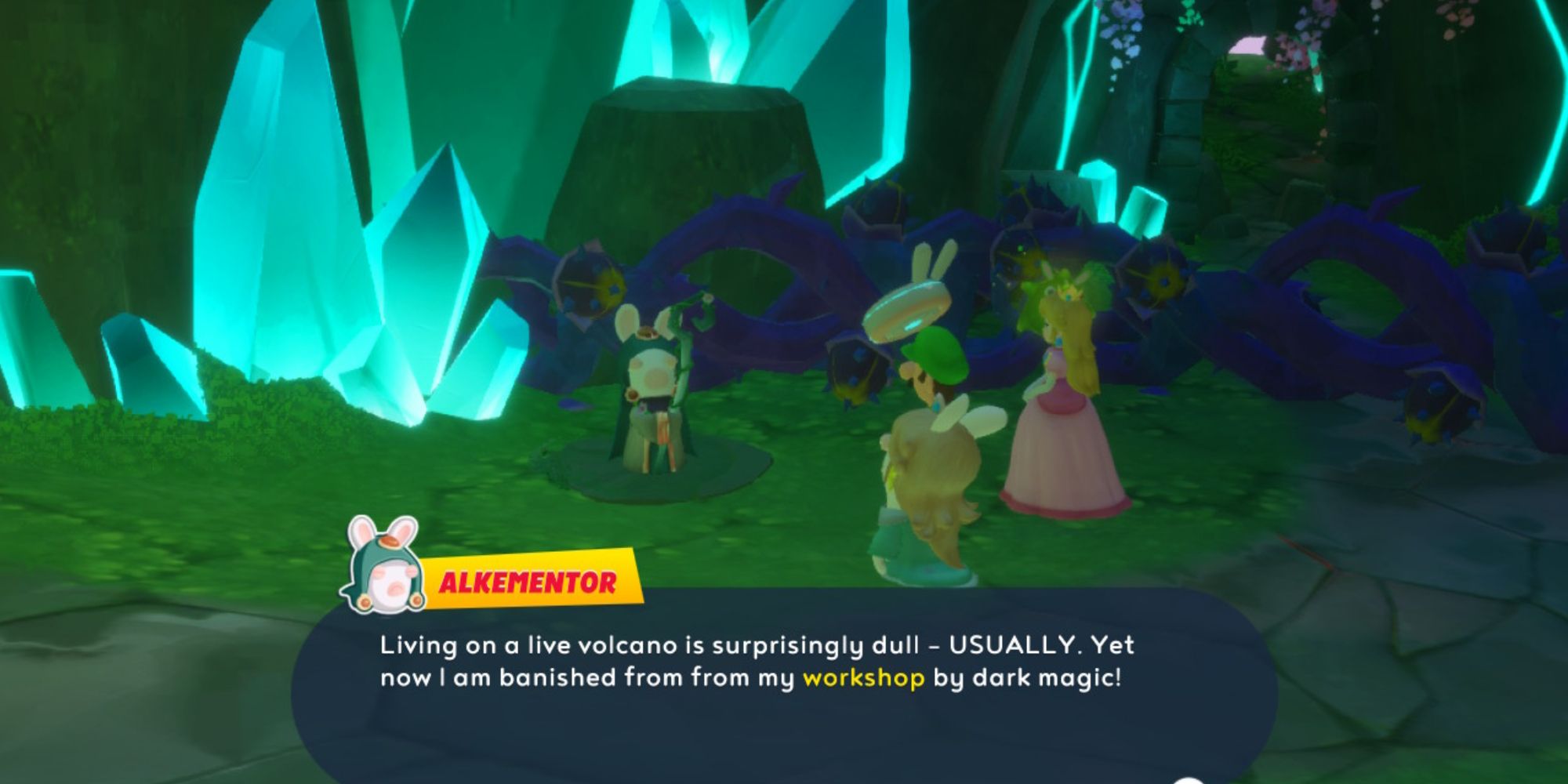 Another one of Terra Flora’s Spark quests is The Quest For Courage. Help a wizard out by brewing a potion and restoring a cauldron through this optional mission. It’s one of the best puzzle quests in the game, as to brew the potion, you have to solve a picture-based puzzle.

From a combat perspective, it’s also fantastic, as the quest’s last battle is unique, centered around the cauldron. Your efforts are well-rewarded with the Spark Toxicomet, who adds an Ooze-based boost to one of your attacks.

2/10 Barrendale Mesa: The Brawn And The Brain 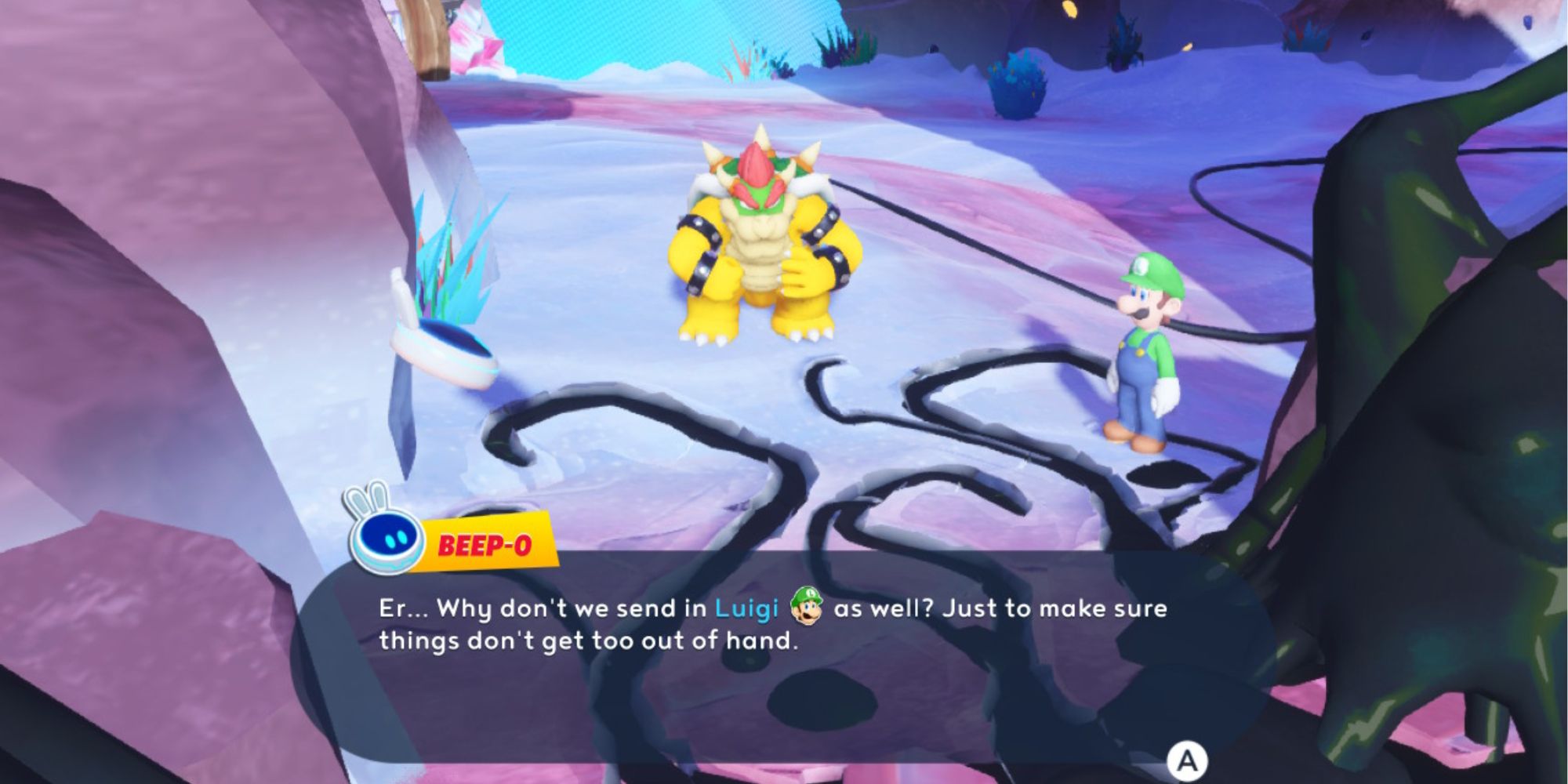 Barrendale Mesa is the most difficult world, coming before the game’s big boss rush in Cursa’s Stronghold. As a result, its optional side quests are among the game’s most brutal. One of the best co-op missions, The Brawn And The Brain, can be found here.

In this side mission, Bowser and Luigi team up. It is an odd but welcome team combo, as Bowser’s explosive attacks pair well with Luigi’s distance sniping. You only have to survive six rounds to win, but don’t underestimate the challenge. 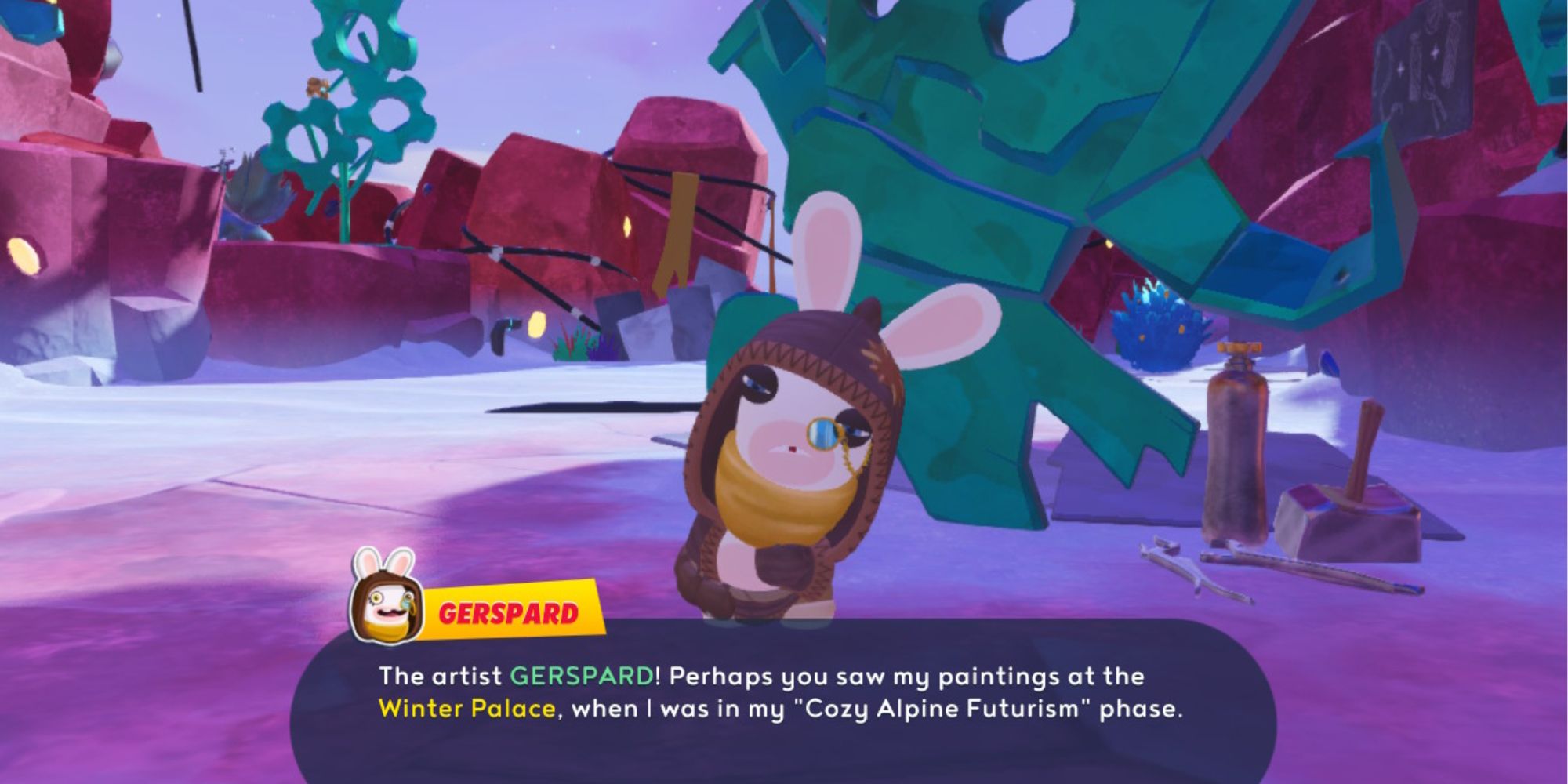 Tortured Artist is one of Barrendale Mesa’s Spark quests, with the simple goal of helping an artist track down his friend DA DA. The quest requires use of all of Beep-0’s Spark abilities, as you need to follow a winding trail of hidden footprints and manoeuvre a few sound blocks. That challenge is only the beginning, however, as the battle to end the quest is a difficult one.

In the quest’s ending battle, you must defeat a huge number of Darkmess Eyes while protecting DA DA. The struggle is worth the payout, though, as the Spark Scoper Master joins your team afterwards. This Spark summons a Scoper Ally to aid you in battle.