Magic: The Gathering's Commander Legends: Battle For Baldur's Gate takes place in one of Dungeons & Dragons' best-known cities, Baldur's Gate. Consequently, it would be an absolute travesty if there weren't any Mind Flayers involved. For those uninitiated, Mind Flayers are one of D&D's most iconic monsters; squid-headed psychic villains who seek to enslave all living things and turn them into their obedient servants.

It might be no surprise to learn that Magic has printed many similarly terrifying cards throughout the game's nearly 30-year run, which is what has recently led to the much welcomed reprintings below in Baldur's Gate's Mindflayarrrs preconstructed Commander deck. Coincidentally, the Mind Flayarrrs preconstructed deck is also the most valuable of the Battle For Baldur's Gate precon Commander decks, going by the individual price of the cards included, thanks in part to these excellent reprints. 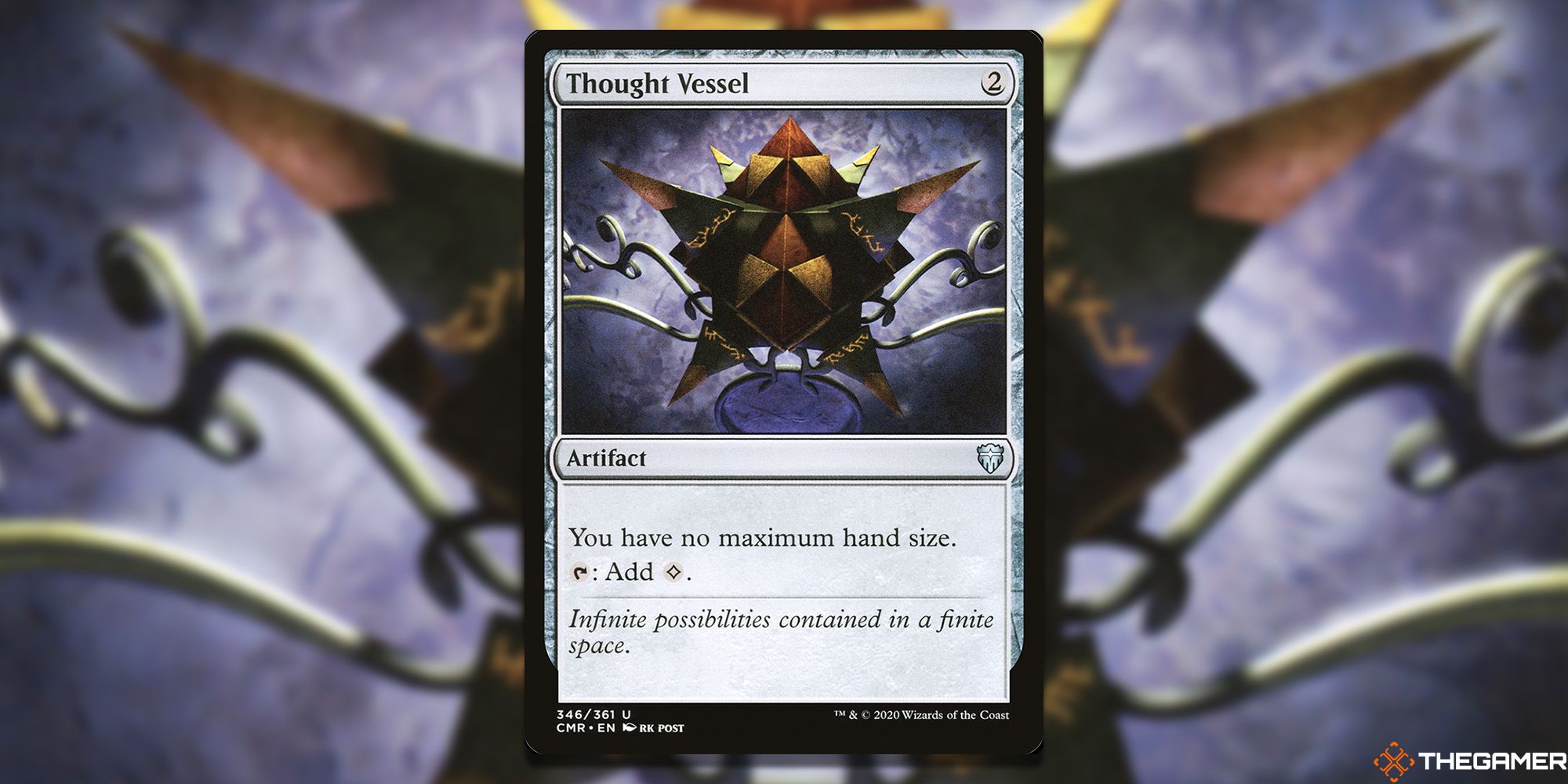 Other than being incredibly appropriate for a mind flayer themed deck, Thought Vessel is a great card to add to any control-based strategy. Breaking the limitations of a maximum hand size is especially good when you're drawing lots of cards and have got multiple opponents that need dealing with, and the added benefit of providing additional generic mana every turn is incredible.

There's a good reason that this puppy is worth $5 despite being reprinted numerous times. 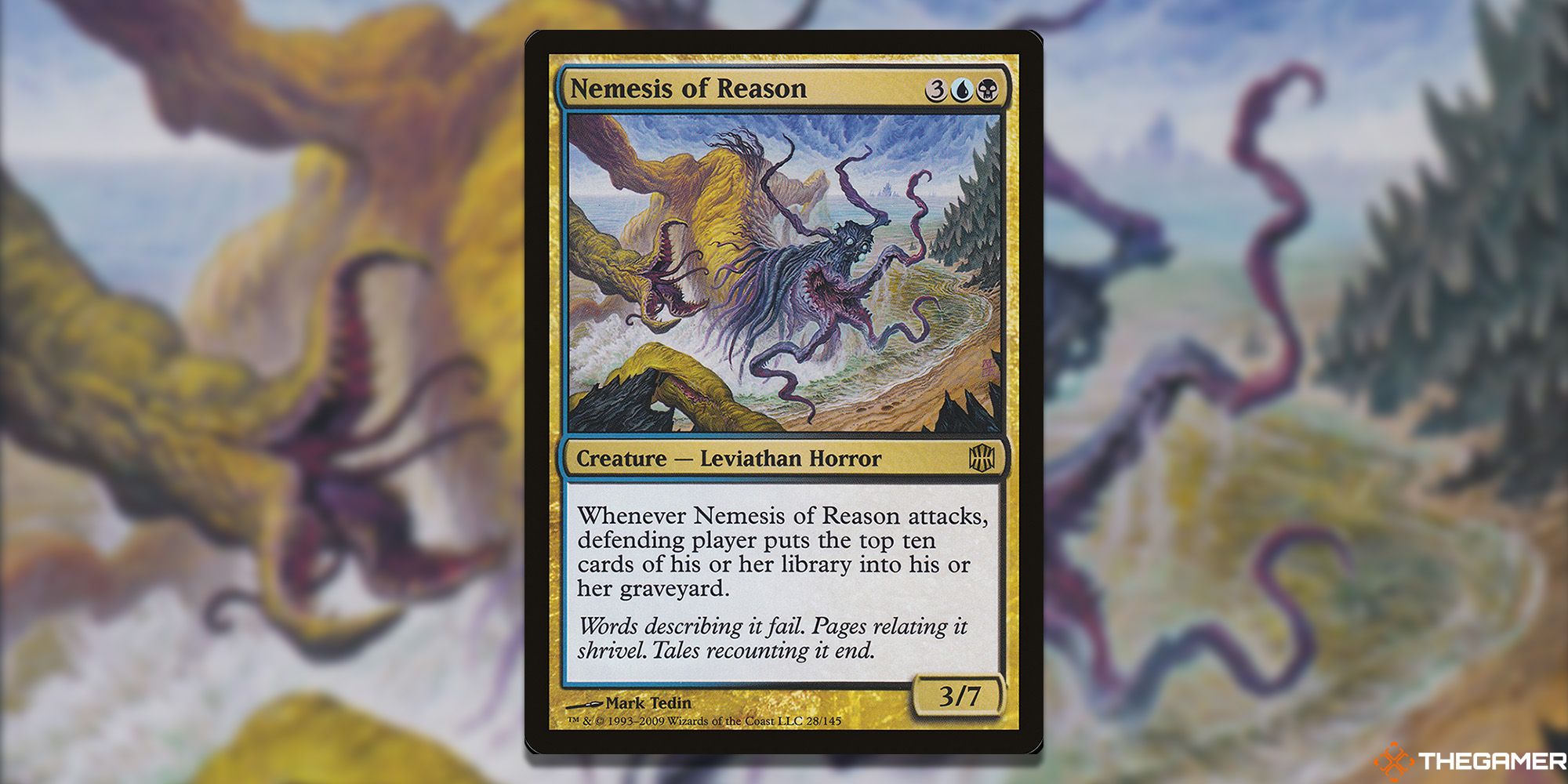 Speaking of cards appropriate for a Mind Flayer-themed deck, Nemesis of Reason is something right out of a Lovecraftian nightmare. This Horror creature has only seen two previous printings: once during its original release with Alara Reborn, and once in the Mystery Booster packs dropped back in 2019.

Consequently, this is a very welcome reprint in that there simply aren't a lot of this card in circulation. Furthermore, it's a terrifying force on the battlefield, as it makes a defending player mill ten whole cards whenever it attacks. 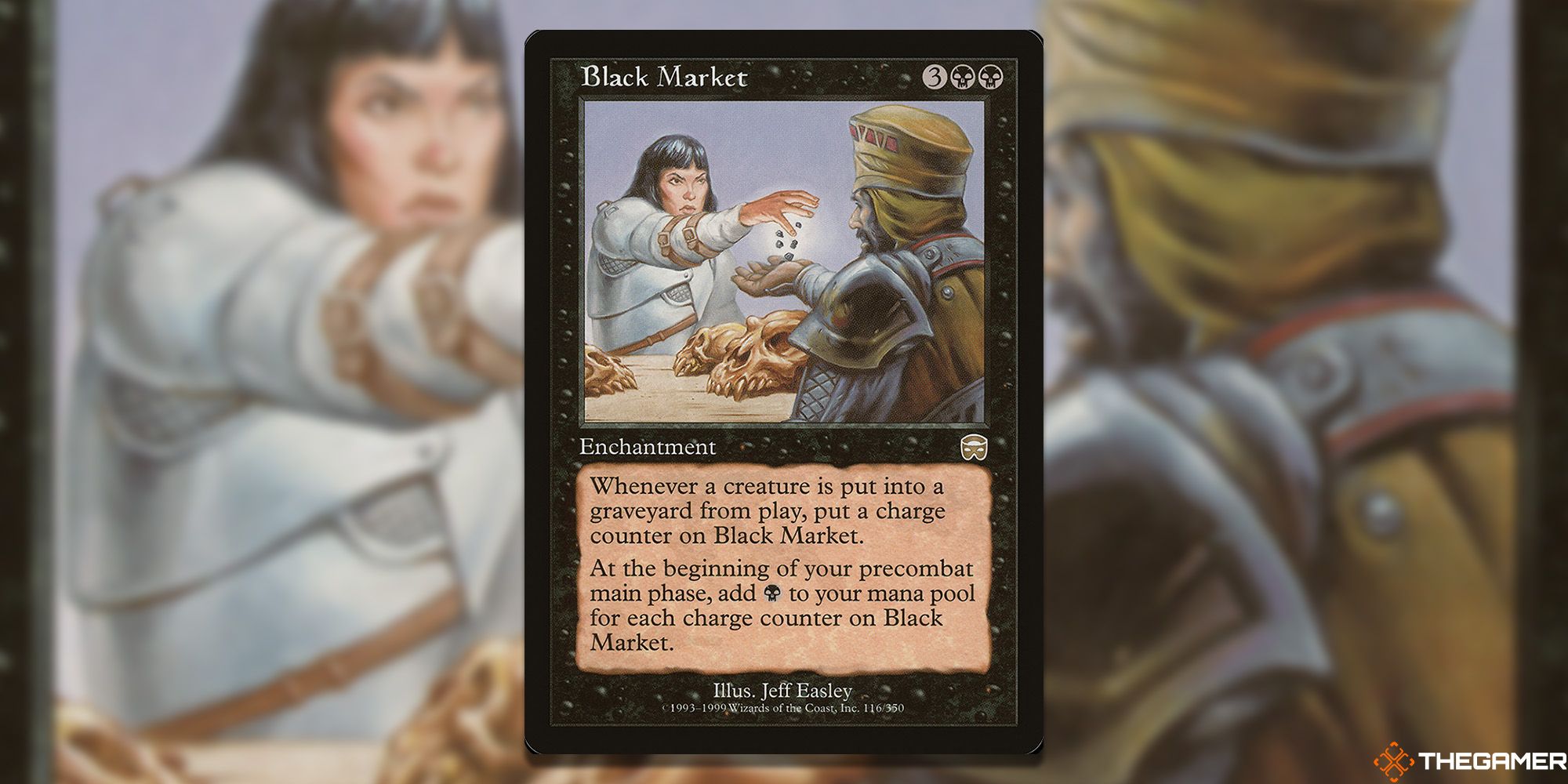 While cards that don't do anything the turn they enter the battlefield are usually a bad deal in regular Magic formats, they have a special niche in Commander. After all, part of the game is that you're trying to convince the other players not to attack you, and what better convincing can you do than casting a five mana enchantment that does nothing.

As the game progresses, Black Market will accumulate counters every time a creature dies. Chances are it will already have a couple by the time it's your turn again. Then, you can unleash the full power of your deck thanks to the added mana this enchantment provides. 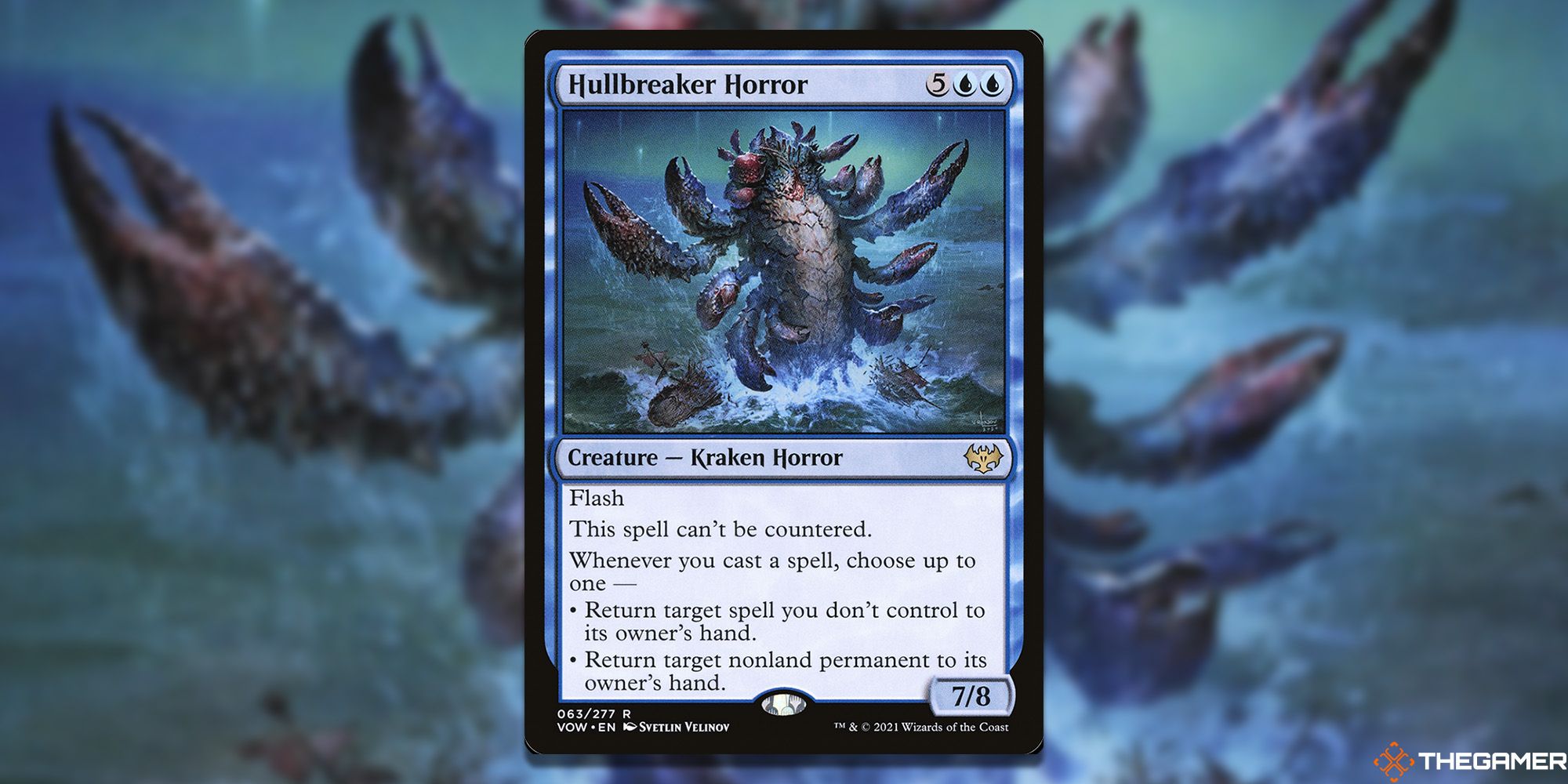 The most recently printed card in this list, Hullbreaker Horror's power isn't a mystery to anyone who keeps up with Standard. The flash keyword allows you to play this card when it's needed most, which usually means taking out a big threat by bringing in the Hullbreaker before blockers are declared.

Once you manage to untap with this monster, everyone's cards are soon to end up back in their hands. Alternatively, you can hold up instants to prevent spells from ever making it to the battlefield. Who needs hexproof when your creature can prevent other players from playing cards? 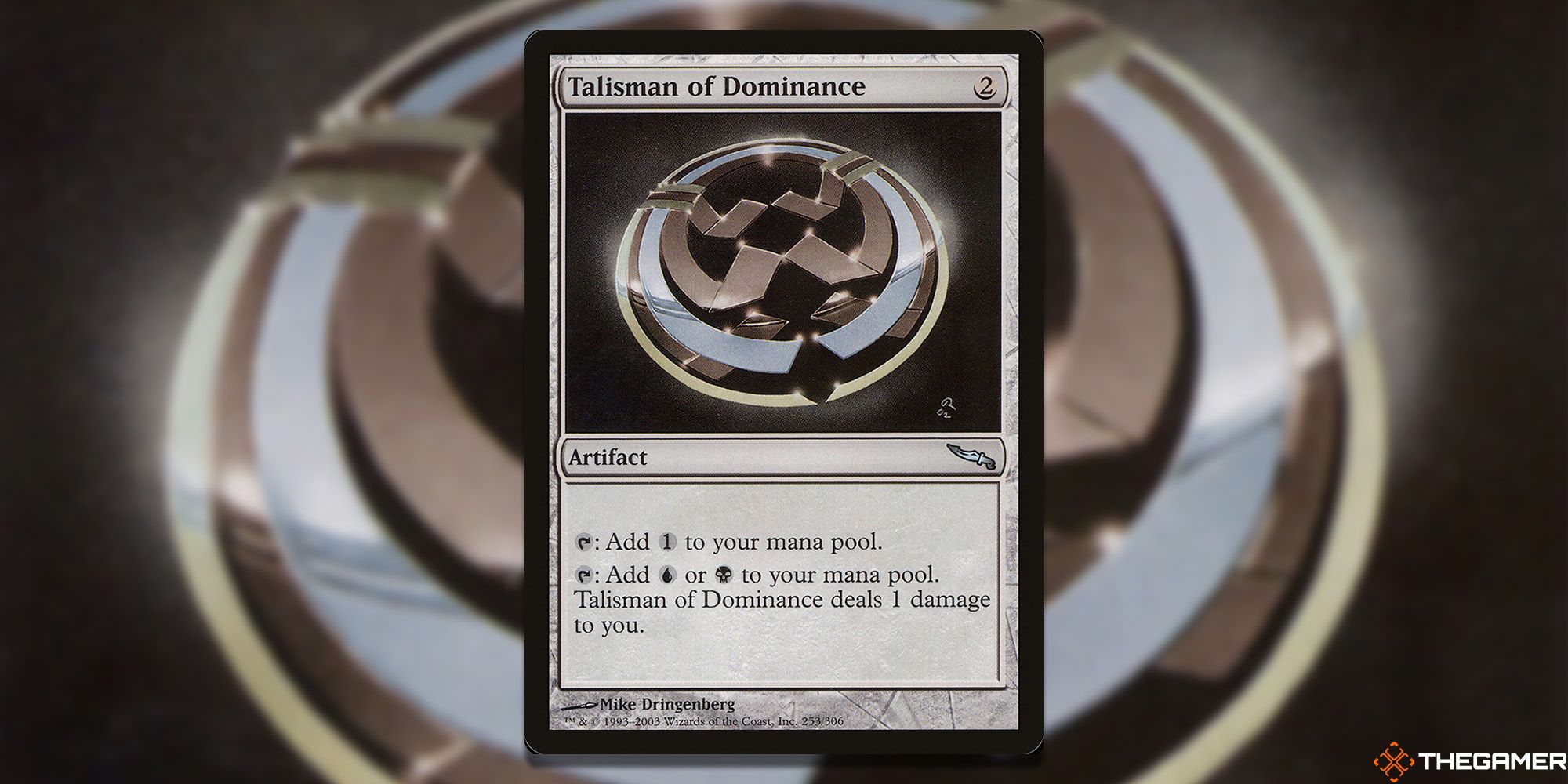 Providing mana fixing in a pinch is perfect for decks looking to take advantage of cards with multiple blue and black pips in their casting cost, which is conveniently the most common color for Horror creatures. For example, throwing out an Archmage's Charm, Phyrexian Arena, and Death Cloud with a Talisman of Dominance could be a great play. 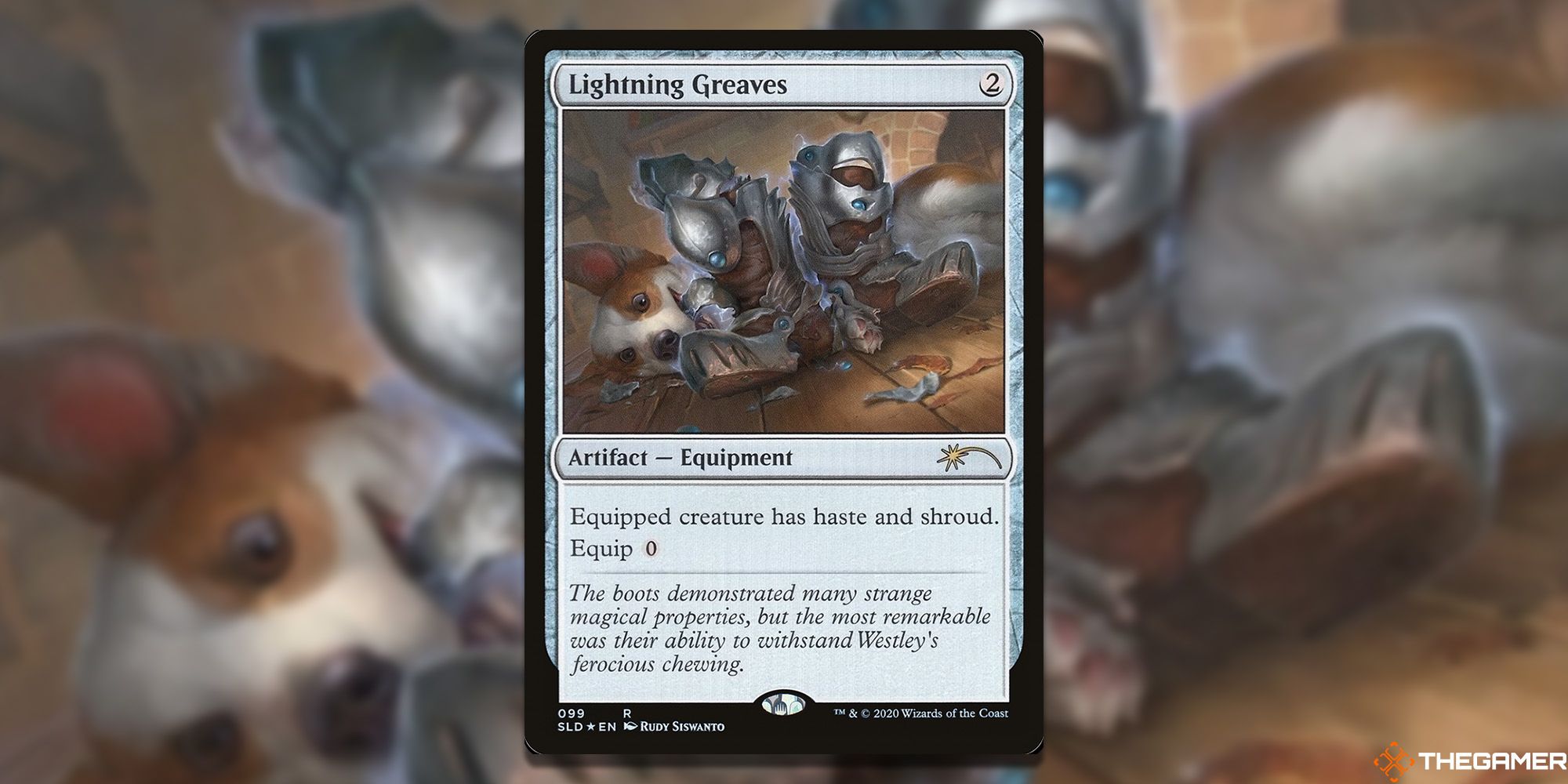 Before the hexproof keyword was created, there was shroud. This keyword means that the card is incapable of being targeted by spells or abilities by anybody. As a reminder, hexproof makes it so that opponents can't target the keyworded card which is infinitely better.

As a result, shroud was retired when hexproof was introduced to the game. Nonetheless, shroud lives on thanks to the existence of this artifact which is incredibly good at protecting key creatures such as your commander. 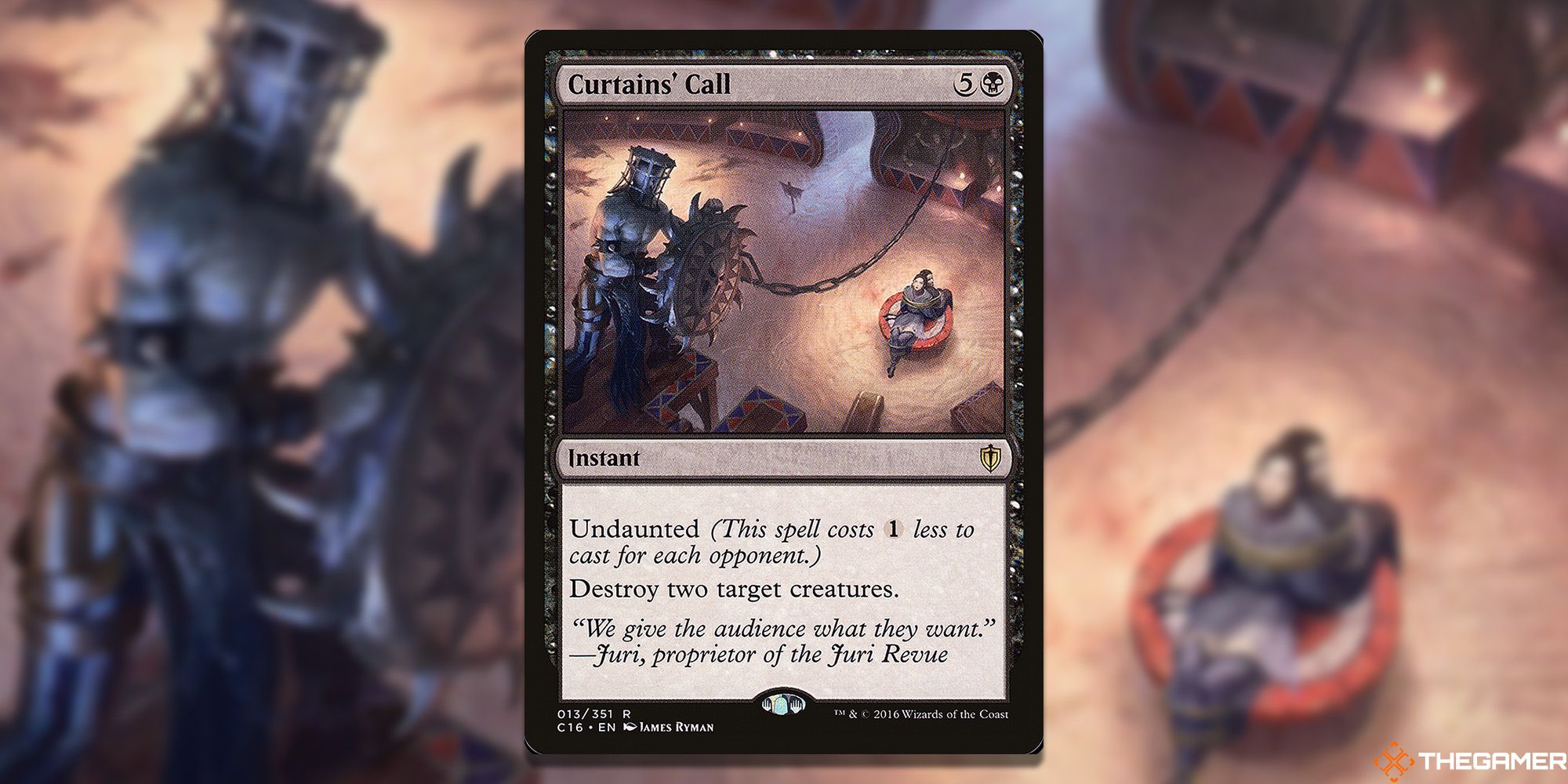 With only one previous printing in Commander 2016, Curtains' Call is one of the cards on this list that most needed a reprint. This two-for-one targeted removal deal is pretty much impossible to pass up for any deck playing black.

This card is best in the early game, as its undaunted keyword makes it cost one less for each opponent in the game. You're not upset to draw it later on, though, as you'll have the necessary amount of mana available by then to still make Curtains' Call a good deal regardless of if any opponents have already been eliminated. 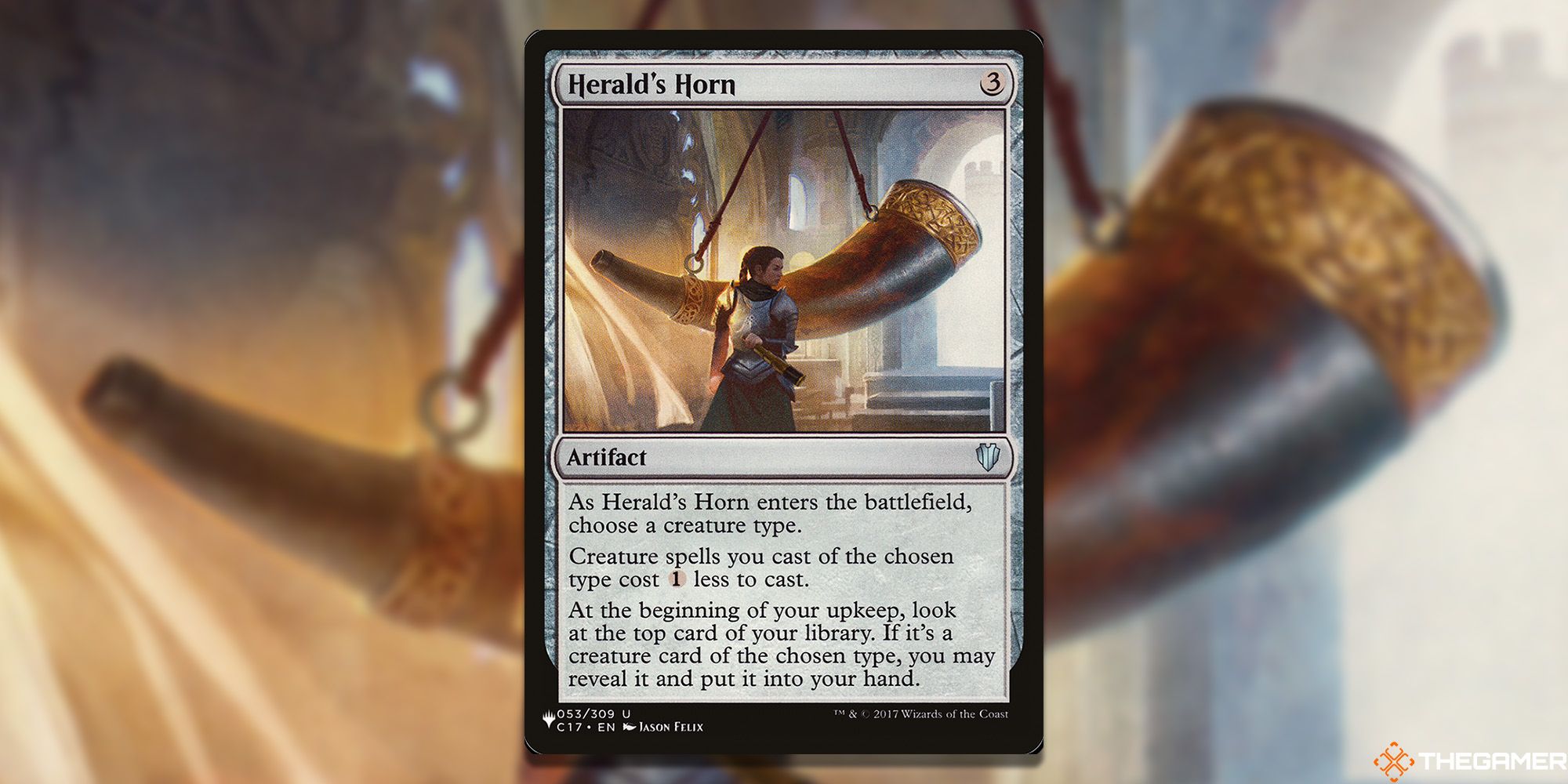 Herald's Horn has seen a handful of printings since its release in Commander 2017, but players' love for tribal decks demand that more copies of this card be made. After all, it's an uncommon that's worth nearly $10.

For a well-built tribal deck, this artifact reduces the cost of every card of the defined creature type by one generic mana, while also providing card advantage by letting you look at the top card of your library and reveal it to put it into your hand if it's that creature type. That's a deal too good to pass up. 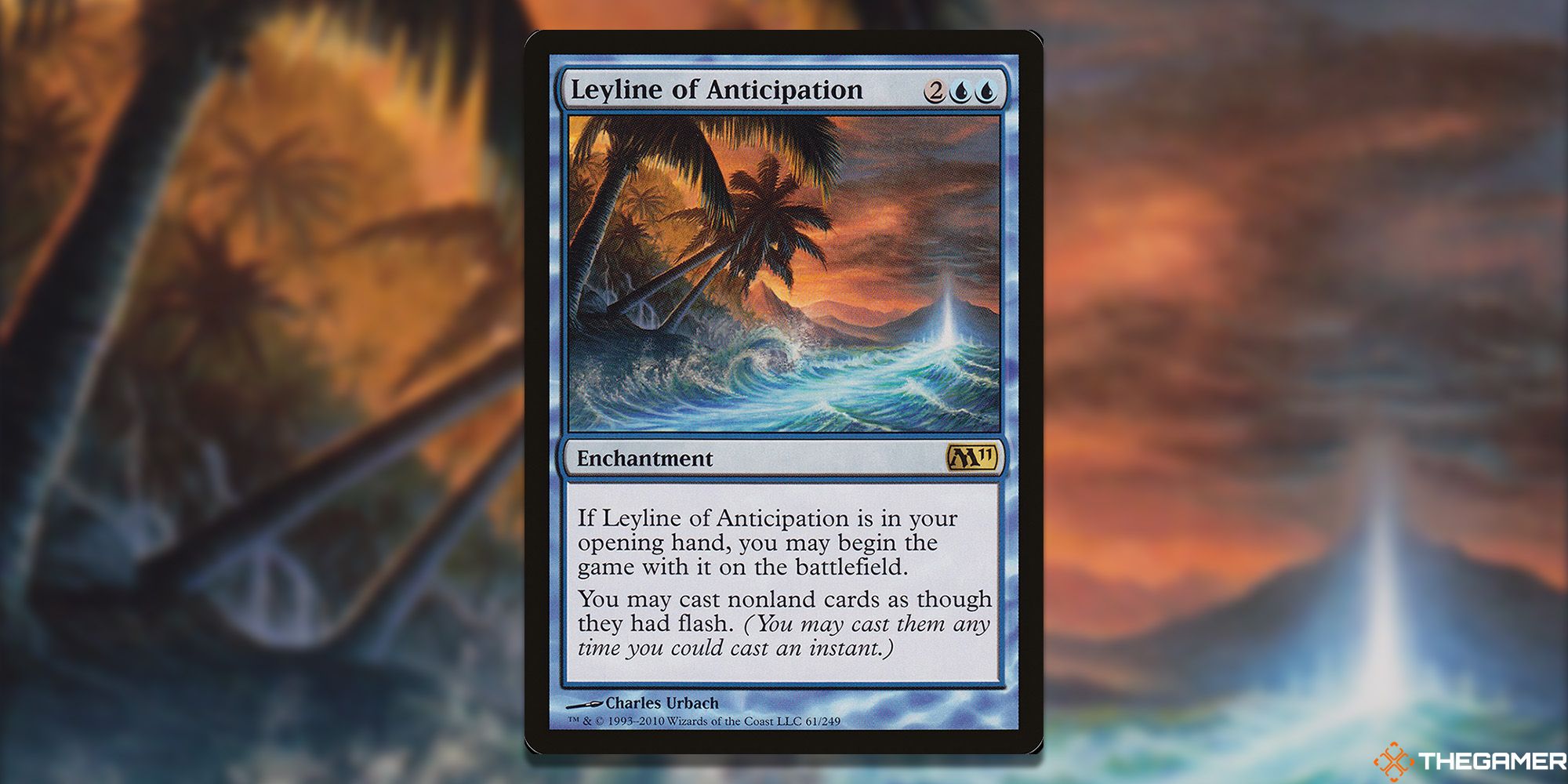 Released as the blue part of the leyline cycle printed back in Magic 2011, anyone who has witnessed a few Modern games can tell you that leylines are good cards. How could they not be, when leylines can be cast for free before the game has even begun?

While Leyline of Anticipation is far from the best member of its cycle, it does have its place in creature-dominant decks, such as the previously mentioned tribal strategies. This also marks the leyline's second reprinting ever, so it's nice to see some more of them in circulation. 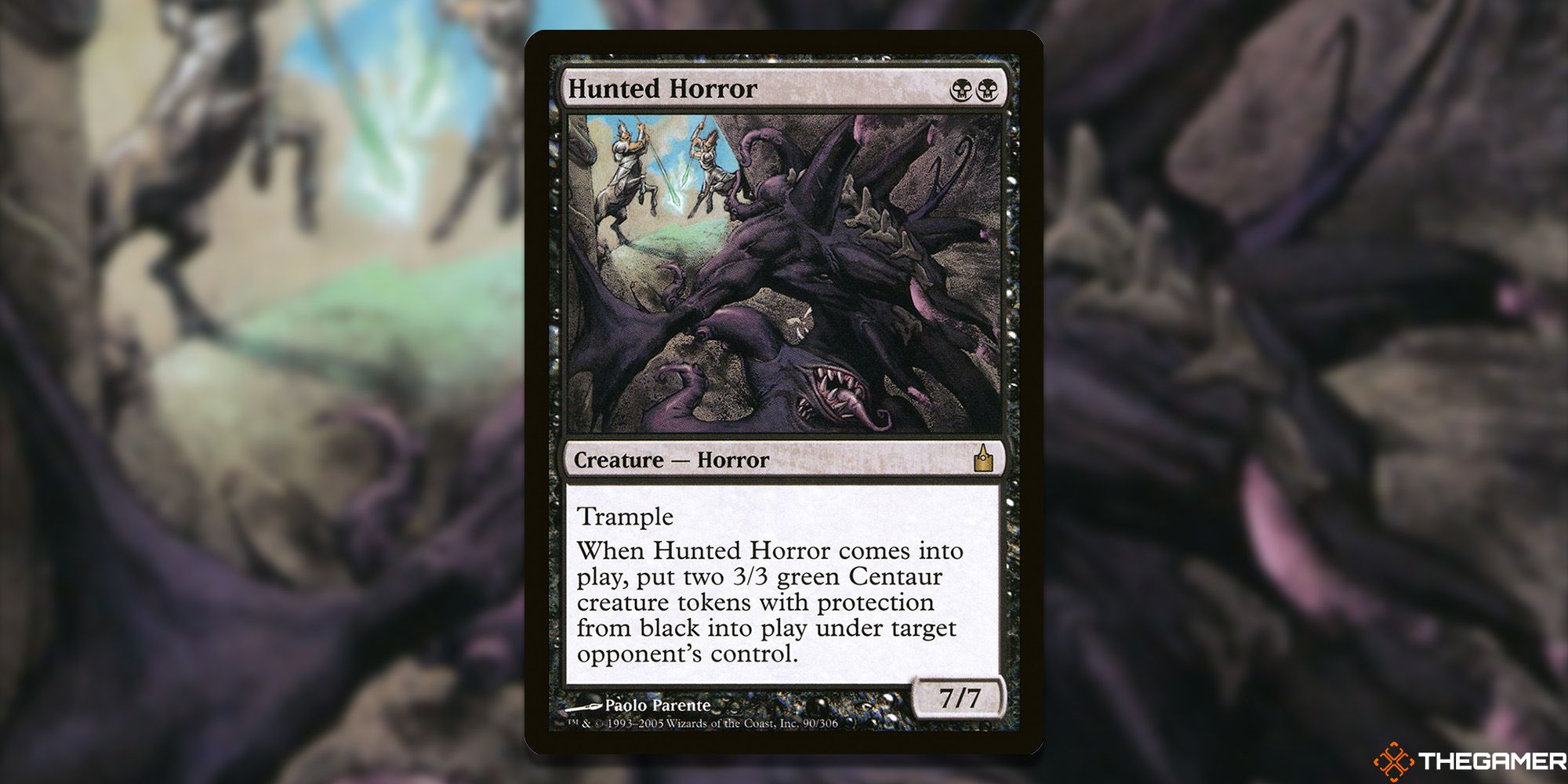 With only one previous printing all the way back in 2005 during the release of original Ravnica, it is well past time that Hunted Horror received a reprint. Furthermore, the Horror creature type has swelled in card numbers in the past 17 years, leading to players creating Horror tribal decks that this would be a perfect fit for.

You can bet your Black Lotus that any player making such a deck wants to include a 7/7 trampler that costs two black. Consequently, Hunted Horror is undeniably the best reprint of the Mind Flayarrrs preconstructed deck.