MultiVersus may be a modern game, but it also has one foot in the past. Gizmo, the mascot of the Gremlins films, is an excellent example of this game's affection for retro properties. And everything this fantastic furry fighter has to offer is a direct reference to those classic films (especially Gremlins 2).

"But how does he play", you might ask. Well, he is a highly mobile character who has access to a versatile moveset which often emphasizes triggering traps. He is also a bit of a terror in the air, capable of swooping down and hitting his opponents before he bounces away to safety. Oh, and he has a number of support moves! But don't worry, while this seems like a lot, we will break it all down for you. 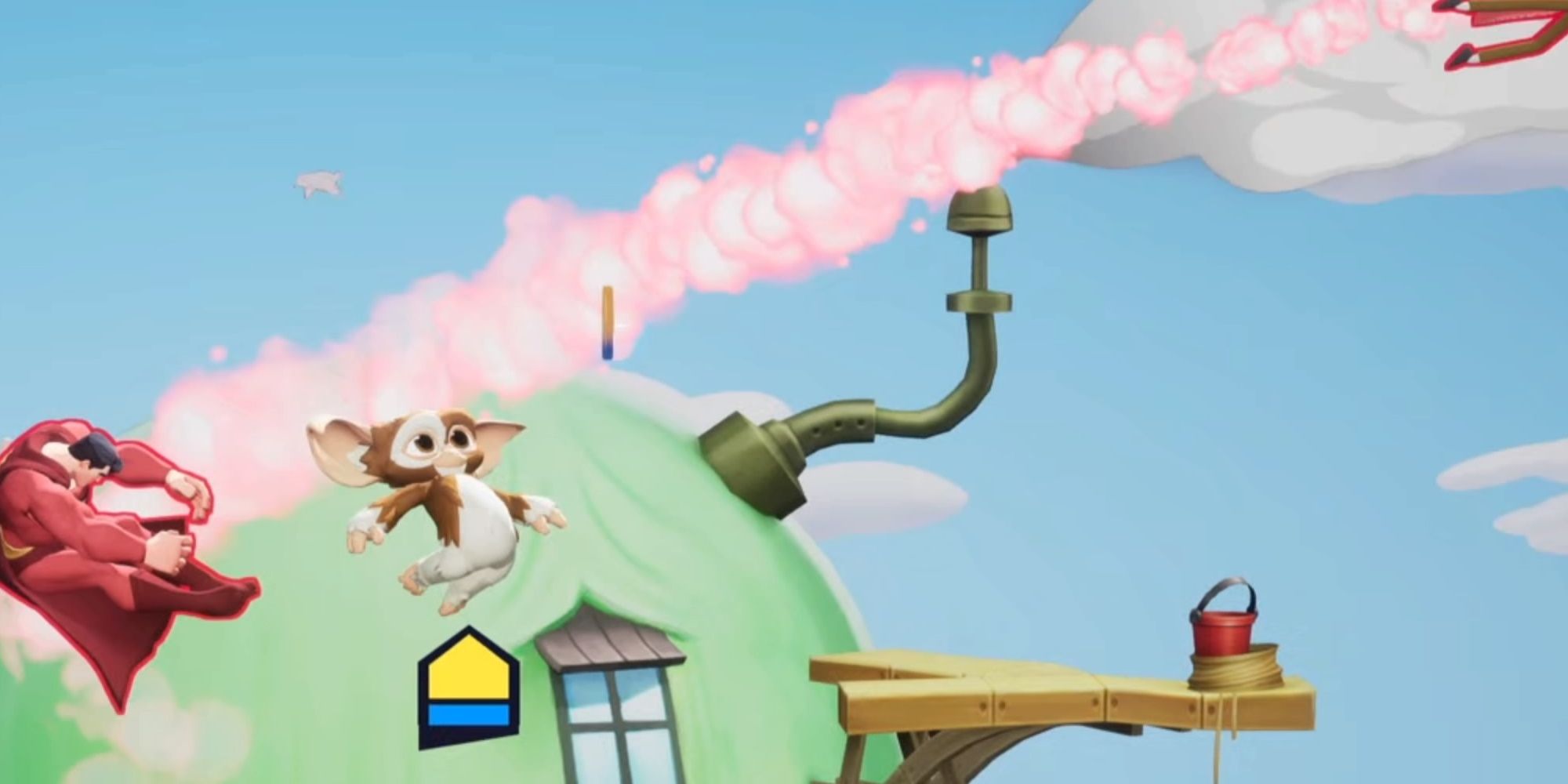 Surprise, Gizmo is yet another character in MultiVersus who feels like he belongs in multiple categories. While he is officially a support class character, Gizmo is so much more! He can get up close and personal, especially when approaching from the air (where he is quite powerful), he has some excellent projectiles, he is mobile, and he can provide support. Basically, he does a little bit of everything!

His core gimmick revolves around music. If he hits his opponents with enough notes, he can stop them from accessing their cooldown attacks. However, more practically, he can sing to give his partner the music buff. Another unique trait is being able to hop on the shoulder of his partner and use his attacks while perched there. He can even give them invulnerability to projectiles. Needless to say, he is a character with a lot going on. 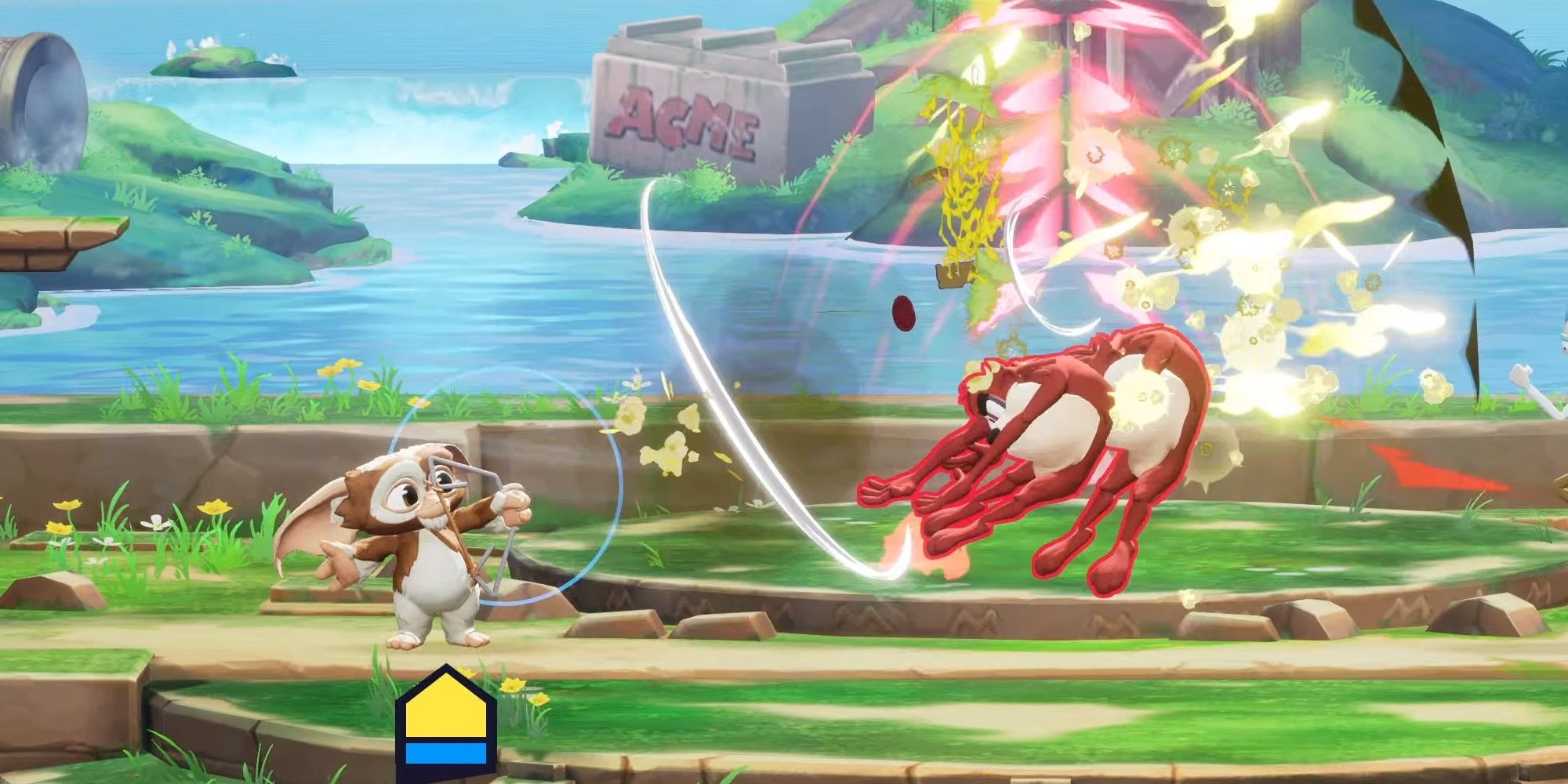 Gizmo has three goals. Firstly, Gizmo wants to set traps (in the form of his popcorn clouds) around the stage and capitalize on them when opponents get close. Secondly, Gizmo should be scuffling with opponents, bouncing off of them, then smacking them with his Umbrella. Lastly, he wants to buff his partner with music, and cleanse them when with his Gizmo-A-Go-Go special when they are inflicted with a status element (we'll get into that more in the teamplay section). 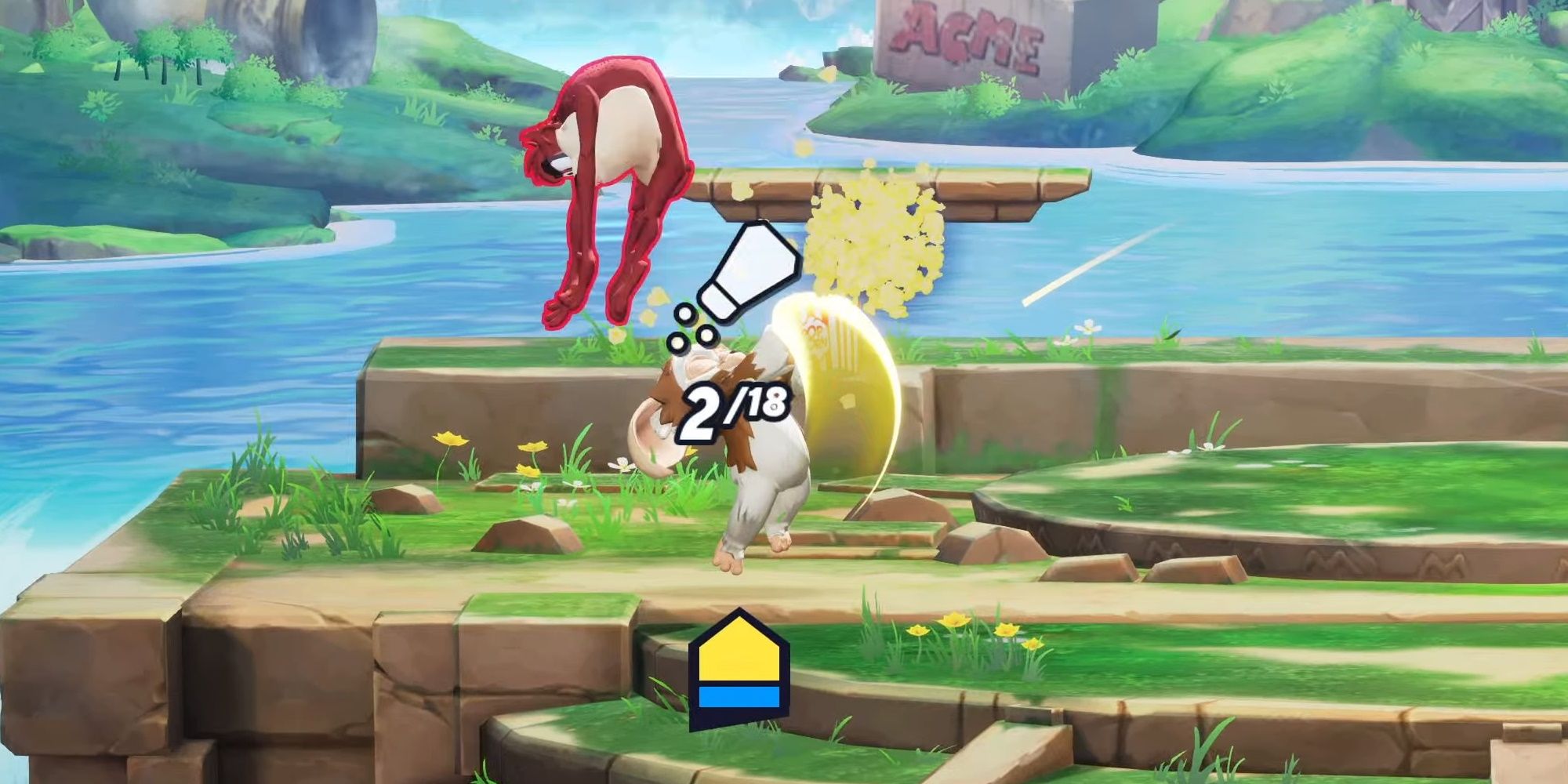 For the traps. Get those popcorn clouds out there! Start the match by throwing some popcorn. You can also throw some on the other side of the stage, giving you some options for exploding them with an arrow. On that note, when you have a moment to stash away a flaming arrow, do so. That means that you will be able to quickly capitalize and blow up one of those popcorn clouds. Gizmo with a stashed flaming arrow, and two popcorn clouds around the arena, is bad news for his opponents! 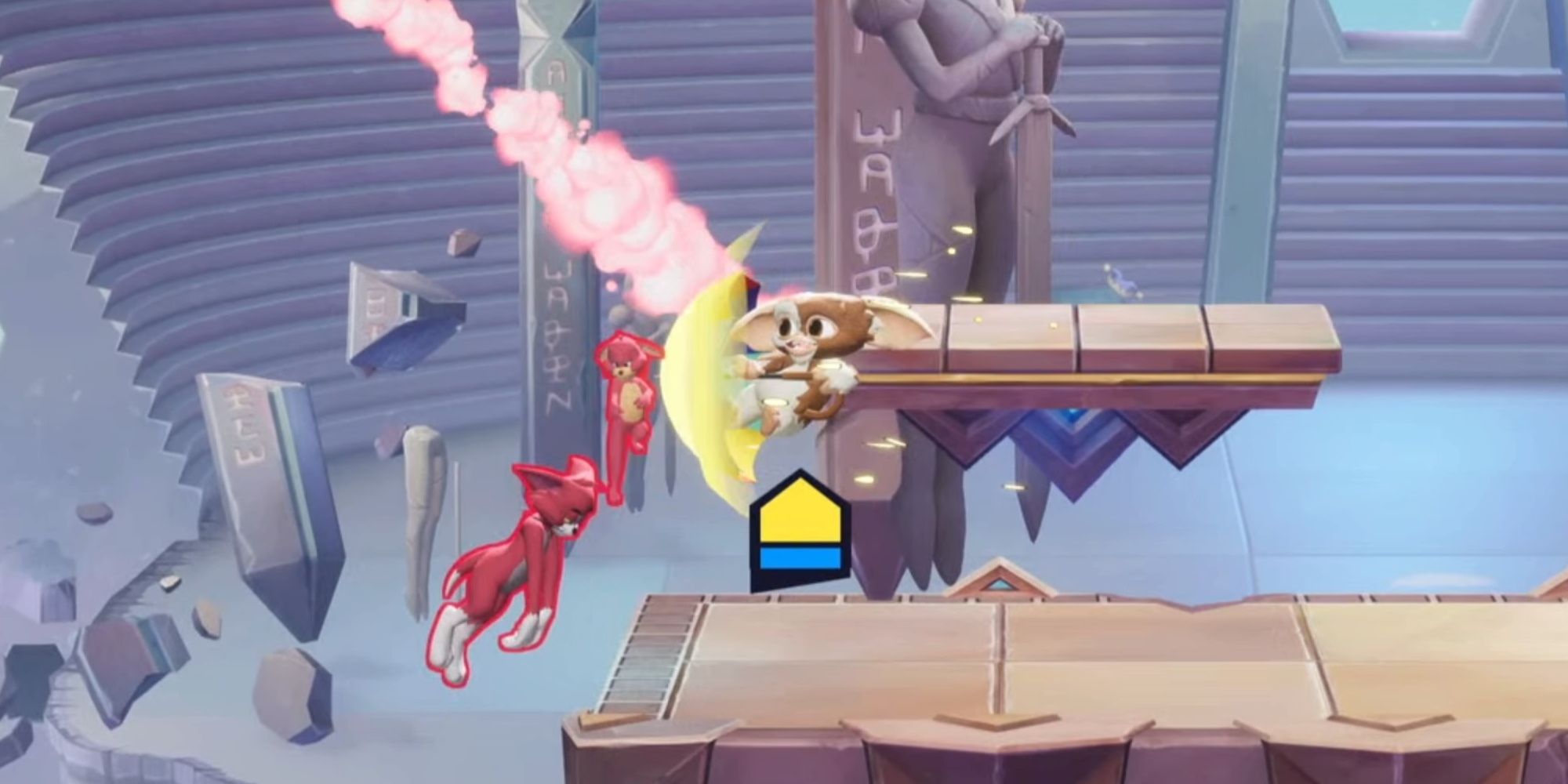 Finally, you are going to want to bounce around the stage, getting little hits in here and there. Gizmo is great when attacking from the air. His butt slam (Falling Furball) is incredible, and his Umbrella Bash is potent! On top of that, his butt slam will pop opponents up, which makes for easy follow-ups in the air. You aren't going to want to stand next to your opponents and exchange blows, as your limbs are pretty stubby. However, Gizmo is a terror when he is attacking from the air. 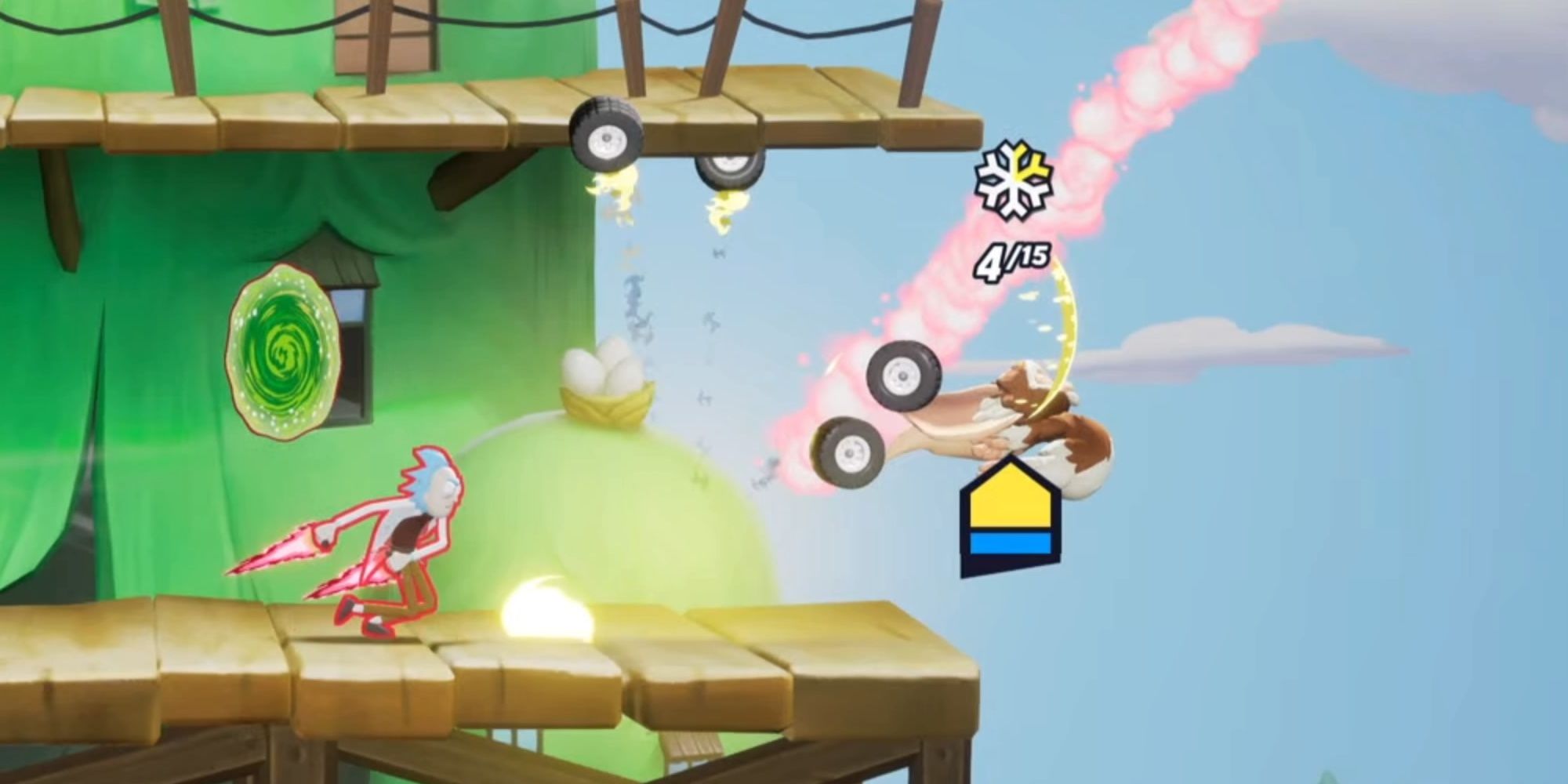 His car attack (Beep Beep!) can also be quite powerful. Especially if you Gizmo-A-Go-Go to hop into it and slam it into your opponents. The resulting explosion is a great way to finish off opponents. You can also hop out of the car while it is you are driving it and attack from above (Gizmo's specialty) which the car hurdles toward them. However, while the car is good, it shouldn't be the cornerstone of your gameplay, as it has a pretty lengthy cooldown.

Remember that a move like Umbrella Bash can be performed extremely close to the ground. Just do a little hop and then immediately transition into it. 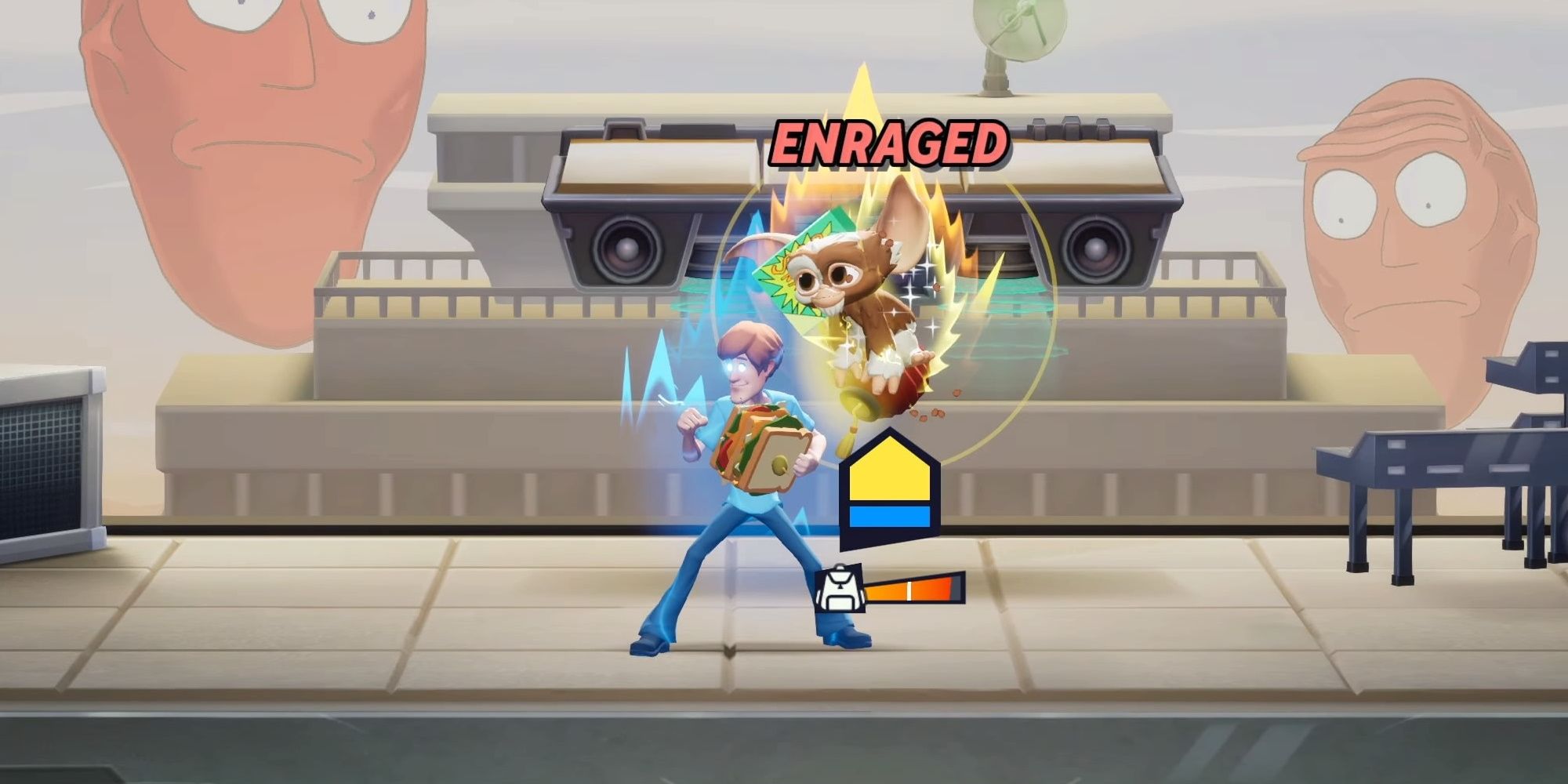 So, Gizmo's big contribution to the team is buffing and cleansing. Sing a little song for your partner whenever they are nearby. The Song Of The Mogwai is a fast move, so give them that buff and move on. If your partner is in the know, they will hang around and grab the three notes, otherwise, give them a chance when they are nearby, but if they don't get it move on. Next, whenever your partner is hit with an affliction, hop on their shoulder and cleanse them. This is quick and easy and will be appreciated.

Speaking of the Gizmo-A-Go-Go special, when you are on a team member's shoulders you can perform a number of attacks. This isn't always a great place to be, but if the Iron Giant has entered into their powered up mode, you can hop onto his shoulder and be protected while you snipe your popcorn clouds down below. Or you can jump on the shoulder of a combo heavy character and add on once they are at the end of a string. Though, that is next-level synergy. 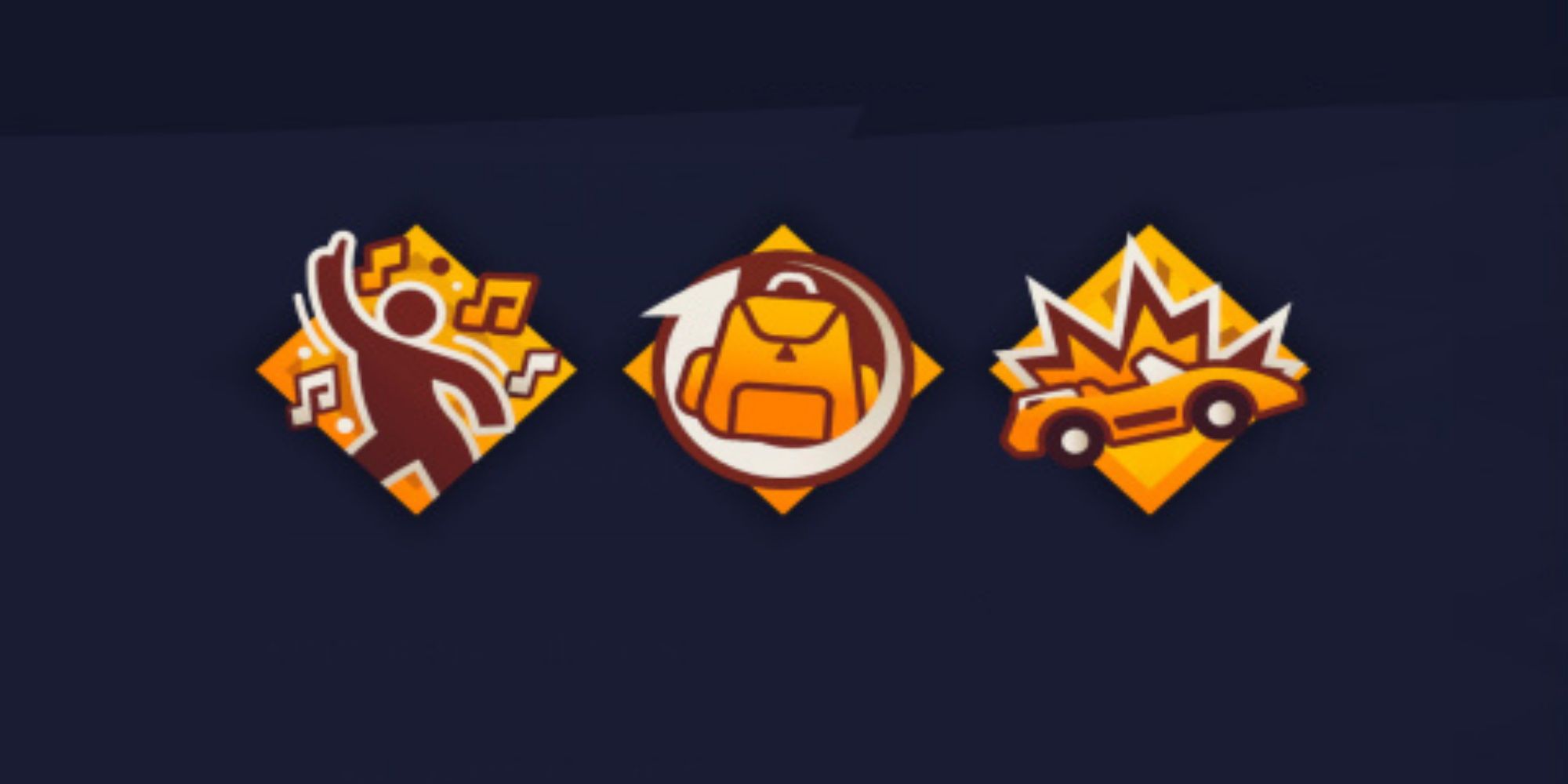 This is a pretty open and shut choice. If you spend a lot of time riding your opponents shoulders, then the Power Cuddle perk is a great choice. We think there are definitely use cases where this could be a great perk to run with. Especially if you are teamed with the Iron Giant, or Wonder Woman, or any of the characters that synergize well with Gizmo's attacks. However, most people are going to want to choose Bounce, Bounce, Boom!. The ability to detonate a popcorn cloud with Gizmo's Falling Furball attack is just very useful.

As for the Rhythm's Gonna Getcha perk… Well, if you are able to reliably silence people, then being able to stun them is obviously quite good. But can you reliably silence your opponents without sacrificing a great deal of your offensive pressure? We have our doubts. The most recent patch made Gizmo's ability to silence more viable, but we don't think it did enough. However, that is us, maybe you are hitting people with those notes all the time. If that is the case, this is the signature perk for you. Otherwise, maybe just stick to one you will be able to use regularly like Bounce, Bounce, Boom!.