MultiVersus Tom And Jerry bear the mage class designation. This is one of the least populated classes and indicates that they are projectile-focused. But while you may hear that they have an emphasis on projectiles and think you have a general understanding of what that entails, we are here to tell you that you know nothing. Tom And Jerry's projectile game is as diverse as it is potent. And it is very potent. 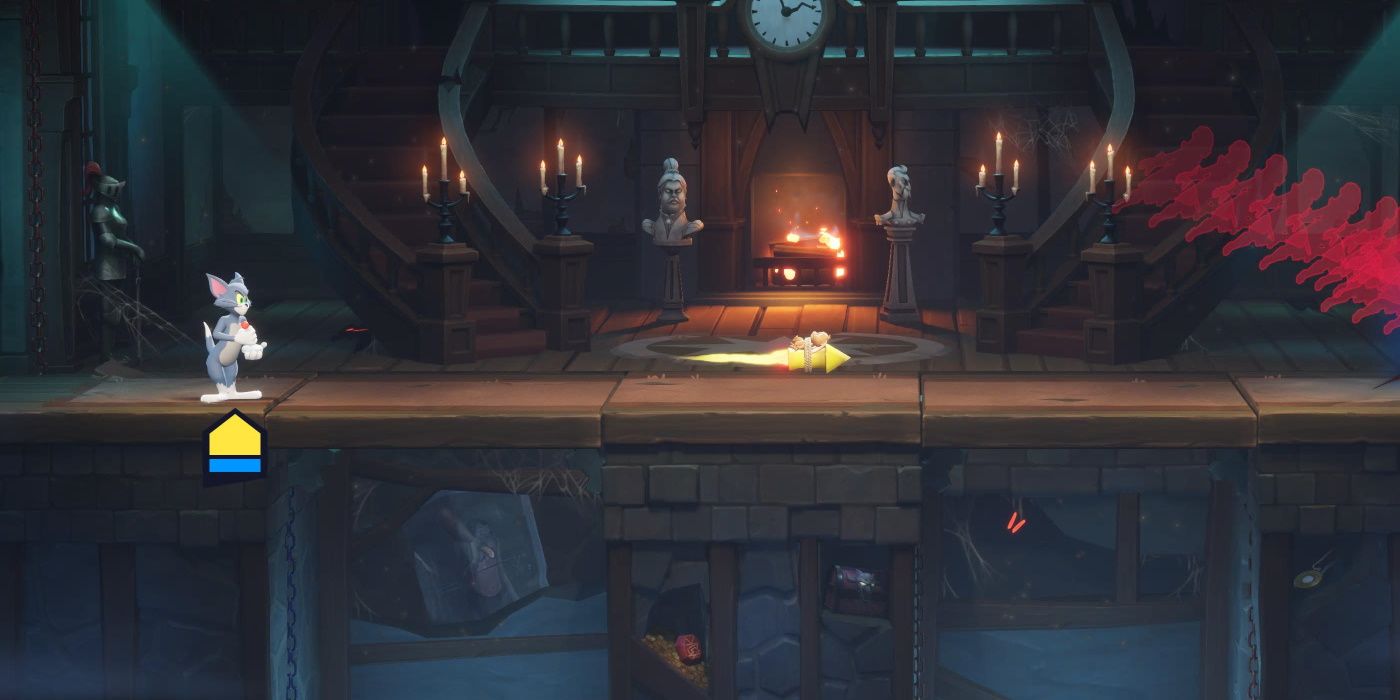 So, first and foremost, you need to get Jerry set. If you are on a single platform stage, a good way to do this is to fire Jerry from the air. However, if you mangle the shot then you will fire Jerry into the void and lose him for a while. You may want to practice the timing a little in the lab. Next, you are going to want to get the trap down. Ideally, you place it right in front of Tom. Now, with Jerry on the other end of the map, and with the trap giving you a little insurance policy, it is time to start dealing damage.

So, you are going to want to first, throw a tennis ball to Jerry using your Slingshot Shapshooter, then jump up and drop a stick of dynamite with your Look Out Below attack. Now, you should bat the dynamite and the ball toward your opponents. The order you hit these projectiles in will change depending on how far away from you Jerry is. Keep in mind that the dynamite will bounce once. So, you can absolutely fast-fall, hit the ground, and then hit the dynamite after the first bounce for a more horizontal projectile (as it will be on a diagonal if you hit it in the air). 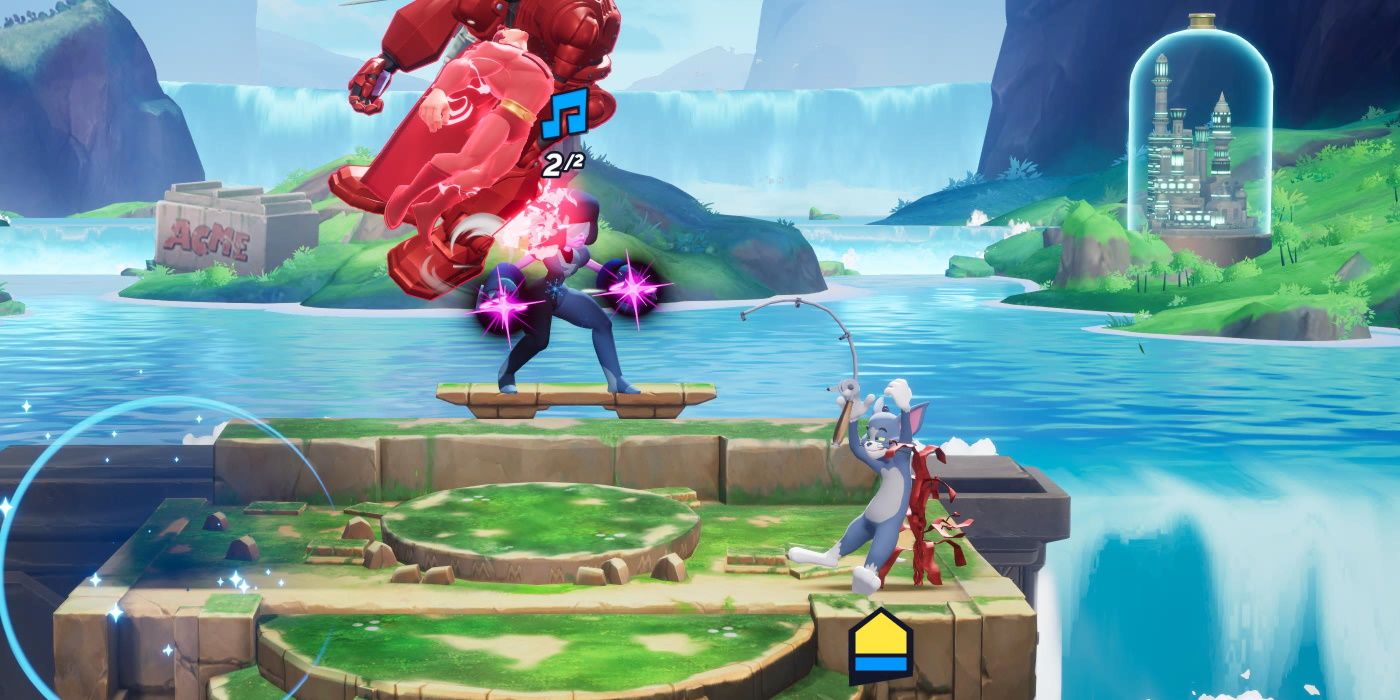 You are going to want to repeat that step and fill the battlefield with tennis balls and dynamite sticks. If your enemies are close to Jerry, mash the attack so that he hits them, and send a rocket their way (if Jerry is out, the rocket will fly toward him). The rocket is also great to use if your opponents are in the air, as its arc travels upward quite a bit. If your enemies start trying to approach you from above, which they often will, use your Goin' Fishin' attack to bat them out of the air. This attack is also super effective if they are on the opposite end of the platform.

Getting used to the timing of hitting the tennis ball and the dynamite consistently is pretty important, you want to loop this sequence as much as possible, so you may want to head into the lab to get the timing down.

You can also put Jerry closer to you, which will keep him safer, and allow you to get a more steady stream of projectiles out there, but it will also diminish the Jerry cork shenanigans while also limiting the number of projectiles crossing the stage. It is a legitimate strategy, especially if your opponents are good about taking out Jerry, but it does have downsides. 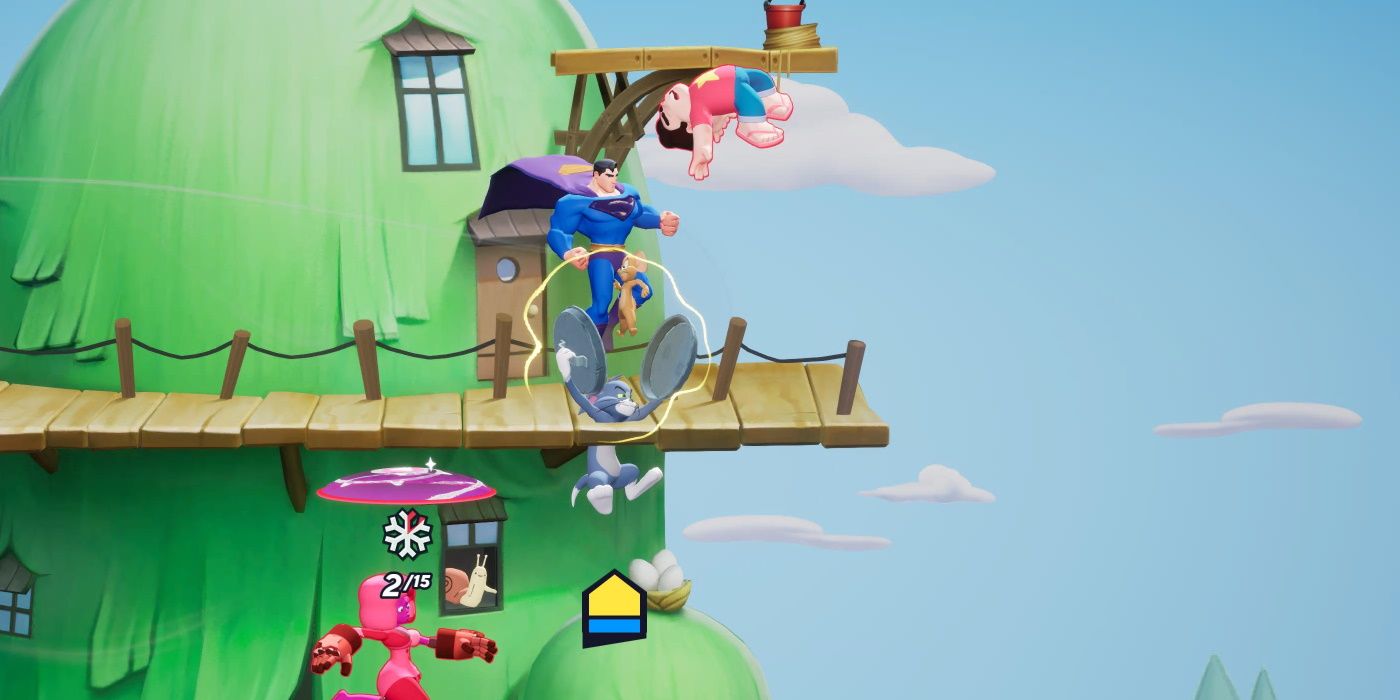 If your opponent lands on the Snap Trap, make sure to follow up with your Trash Can Band aerial attack, as they will be popped up in the air. This is also true for the Goin' Fishin' attack at certain ranges. You are going to constantly have to set Jerry up, and you are going to run low on projectiles; just try to stay clear until it all recharges.

Tom And Jerry have excellent edge guarding abilities. If people are below you, you can hit them with the frying pan or drop dynamite on them. The Goin' Fishin' will kill enemies who are above you on an angle, and Trash Can Band will get them if they are immediately above you. Tom And Jerry can literally cover every option. 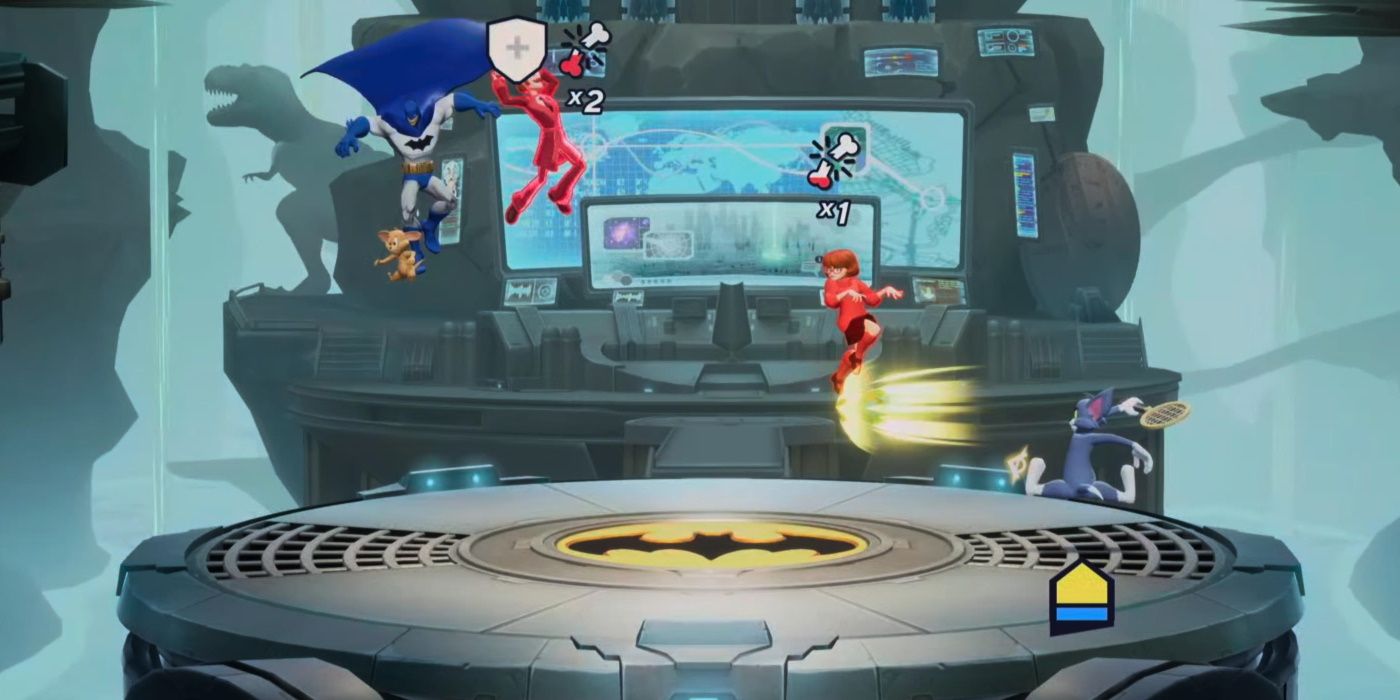 Here the primary thrust isn't what you can do for your partner, but what your partner can do for you. Tom And Jerry are going to spend most of their time dealing damage and creating havoc on the battlefield. Your partner's primary job is to try and keep the enemies off of you.

However, Tom And Jerry can help their partner in one big way, if your partner picks Jerry up, they get a buff that increases their damage output and their speed. This does make it a little more difficult for Jerry to ricochet projectiles back at Tom, but if your partner doesn't get too jumpy it is totally doable. 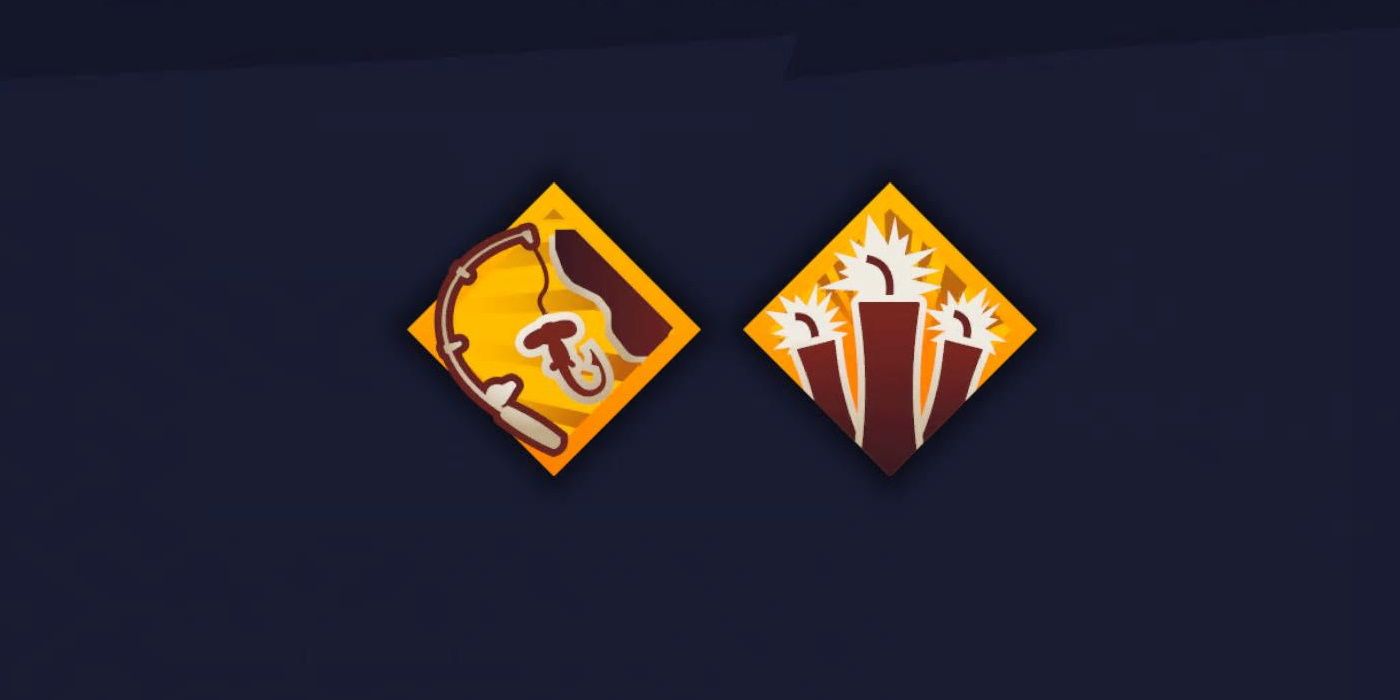 When it comes to the Signature Perks for Tom And Jerry, we are going to veer from the typical course. Nearly all the signature perks in MultiVersus seem to aim your character toward emphasizing a slightly different build. However, we can not imagine a scenario where you wouldn't want to go with Tom And Jerry's Dynamite Split Signature Perk. 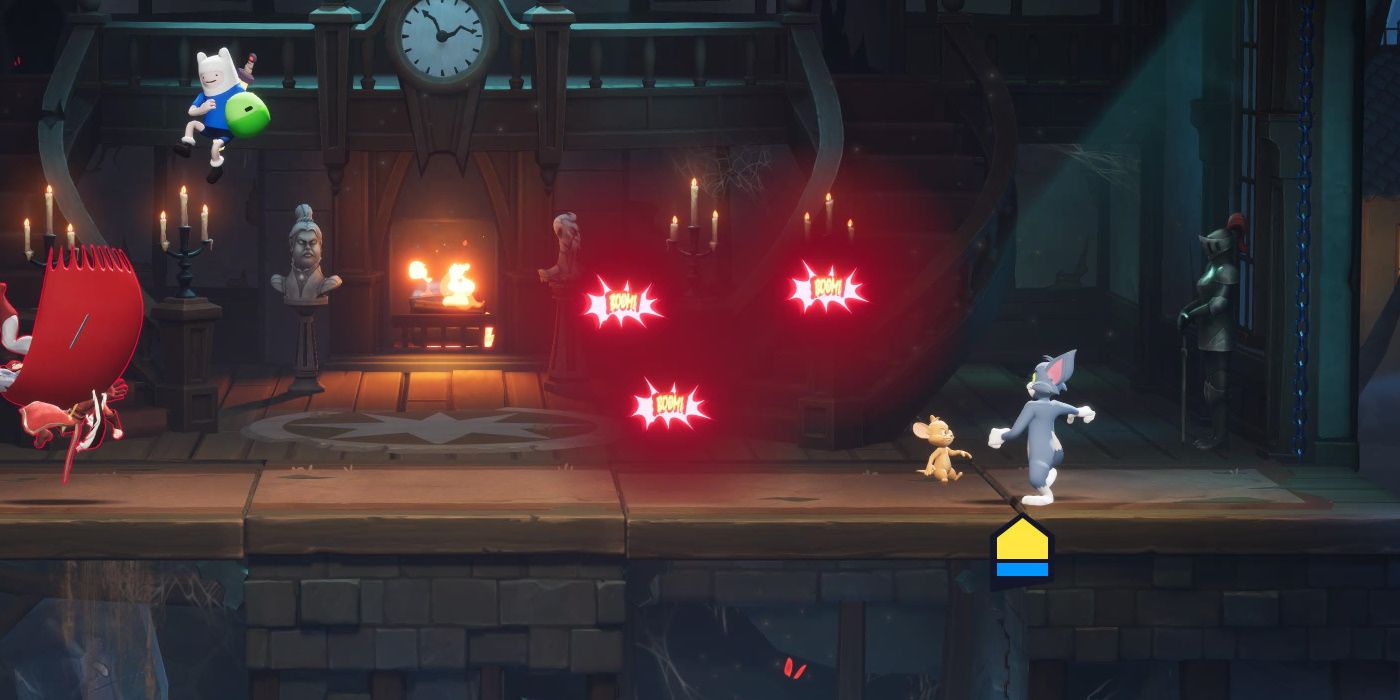 This perk makes it so that Tom And Jerry's dynamite splits into three projectiles when it is hit. They fire out in a spread shot-esque pattern. It makes the Look Out Below attack an extremely powerful tool. The Fly Fishing Signature Perk, on the other hand, weakens your Goin' Fishin' attack and makes it better for getting back to the platform. It feels like a very easy choice to make…