Pregnancy causes all the feels — even in those not carrying the new baby. A recent mom-to-be found that out the hard way when her mother-in-law had an emotional outburst at her daughter-in-law’s gender reveal party, and Reddit thinks the pregnant mama is actually the one who needs to apologize.

In the “Am I The A—hole?” subreddit, a 31-year-old woman who is 7 months pregnant, wrote about how she yelled at her MIL over a baby-naming tradition, and it’s super sad all around.

The pregnant mom started off by explaining how she and her husband decided to have a “later” gender reveal, due to being busy with a honeymoon and buying a new house. “We both decided to throw the reveal at my MIL’s house and invited a LOT of people, my family his, friends and some even coworkers of my husbands,” she wrote, basically everyone they know. So keep in mind, the whole situation that follows happened in front of a huge audience.

“My MIL has a family tradition that dates back many generations, naming the first born (fake names) Diana if the first born was female and William if it was a male,” the pregnant mom continued. “My husband was not the first born and isn’t named William, so I didn’t think the ‘traditional’ naming would be passed on to us.”

But, everyone knows what happens when you assume! You make an a—out of yourself at the baby shower, apparently. “Little did I know that it would because MILs first born died too young to have kids and the naming tradition passed to my husband,” she continued, adding, “I was always hesitant to follow the tradition because I don’t like the names and they are very old and I don’t want my kid to get bullied just because of a dumb ‘tradition.’” I completely understand wanting to choose your own name for the baby, but it seems like this should have been something discussed with both your husband and mother-in-law before the gender reveal announcement? It definitely calls for a private, heartfelt discussion.

“When me and my husband revealed the gender of our baby my MIL became extremely sensitive and cried a bit because it was the same gender as her passed child,” the mom wrote. Which is extremely understandable! Again, pregnancy brings up a lot of emotions, and seeing her daughter-in-law pregnant with a baby girl would understandably make the woman emotional for the daughter she lost. 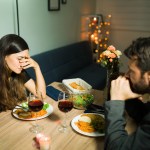 “She believes in reincarnation and thinks that her child has a new chance at life and she told me that she can’t wait to meet Diana again,” the mom continued, which I admit, seems to be taking it a step too far. Maybe don’t put those expectations on a little baby?

But the pregnant woman completely overreacted…in front of everybody. “I lost it and yelled at her that I’m not naming my child that and it’s my child not hers my husband says ITA but I think I’m not,” she wrote. “I don’t wanna name my kid some old Victorian name just because someone died, sense the fight my MIL has tried to reach out to me but I don’t wanna talk to her so AITA?”

If you got lost in that slightly confusing rant, I’ll clear it up for you a little: the MIL was feeling nostalgic and sentimental about welcoming a new baby girl in her life after losing her own daughter too young, and her pregnant daughter-in-law yelled at her in front of everyone — in her own home. She told her MIL that the baby wasn’t hers, that she isn’t going to use the name, and to basically to F off — and yeah, she wonders if she’s TA? Yes, ma’am, you definitely are!

Although, to be fair, the MIL should definitely not have tried saying this new baby was her daughter come back to life, nor should she have insisted on the name tradition.

Another wrote, “ESH You should have discussed this with your husband before hand, and then let MIL know prior to your reveal that you would be choosing your child’s name on your own. She’s doing way too much, but you freaked in public.” Agree!

“ESH. Yeah, you both should name the baby whatever y’all choose to, but yelling at your MIL about it was probably uncalled for,” someone else commented. “You couldn’t just calmly say that you and your husband will decide on a name together bc that’s your family’s tradition? Also, if she’s trying to talk to you, she might have come to here senses, but you’re just ignoring her. Is your plan to just ignore her forever?”

Someone else commented, “When she was crying over her dead daughter was probably the worst time to bring this up. I can’t believe neither OP nor her husband foresaw this happening — the husband especially since it’s his mom. OP can obviously do what she wants, but MIL isn’t necessarily the AH because no one told her the naming tradition wouldn’t continue, which would have given her the chance to grieve in private — and this WAS a very emotional moment for her. People aren’t always rational when something like this is sprung on them, much as I would also hate being told what to do if I were OP.” Yes! This is very, very true. This whole thing could have gone down differently with just a little basic respect and a few moments to process in private.

Interestingly enough, the OP posted an update about the situation. It turns out, her husband was no innocent bystander — he planned to go behind his wife’s back the whole time!

“Okay so first I’ve decided that sharing the original names are okay so the female name is Edith and the male name is Vincent I just- ugh I hate them so much.. I’m not even sure why I just do something just seems off about them,” the pregnant mom wrote, adding this eyebrow-raising update: “So my husband (we’ll call Mack) got off work and we decided to talk over dinner, he told me that he planned on secretly naming our child Edith without me knowing and that infuriated me!”

My jaw is hanging open — are you kidding me?! So no wonder the MIL was kept in the dark about them not following through with the baby-naming tradition — because the husband was planning on secretly following it the whole time! How would that even go down? Would he rip the birth certificate form out of his wife hands while she’s still in the hospital recovery room to secretly scribble down the name? How would you plan on dealing with the aftermath of that, sir? This is just so utterly ridiculous — and a huge red flag.

The OP went on, “I mean common this is basically my kid not yours I’m carrying them for 9 months not you- ugh maybe it’s just my pregnancy but I hate it so damn much.”

Yes, I completely understand why she’s mad. But as a side note: let’s hope those last few thoughts are the pregnancy hormones talking because what she just wrote is pretty messed up. You may be carrying the baby, but it is still equally half yours and half your husband’s. Why is everybody so damn possessive over this baby?

“Mack also told me that my MIL Edith has been keeping a bit of a secret that Edith (MILS kid) was 16 when she passed away and was secretly pregnant so that made MIL even more sad about her death,” she continued. “Mack talked to Edith(MIL) at work while I’m at home watching the dog and she apologized for her reaction and was just shocked it was a girl. Though I don’t think I’m ready to accept it I can move on..”

Hmm…OK? The OP still didn’t apologize for yelling at her mother-in-law, but whatever. The two have finally settled on a compromise, albeit a super weird one.

“Me and Mack decided that we will name our little girl Jane and her nickname would be Edith at least just for my MIL,” all I can say to that is ha. Hahaha. Yeah, that baby girl will never be called Jane in her life except by her mama.

It only gets stranger: “After Jane is born I’ll go back to work as soon as possible and Edith will take care of little Jane, I’m okay with it now I’m was just angry at the time,” she added. “Sorry it’s a bit of a vent but at least it had a okay outcome?”

Yeah sure, whatever you want to tell yourself, honey! One person commented, “Do you realize that if Big Edith is taking care of little Jane, she will call Jane ‘Edith’ all day every day, and Jane will not realize that her name is Jane? Why do you trust a woman who thinks your poor child is the reincarnation of her dead child to raise her?”

Another pointed out that this mom-to-be needs to instill some boundaries ASAP. “Please don’t use the nickname Edith for Jane,” another wrote. “It makes no sense and will confuse a young child. Plus, you hate the name and it is quite an old name. If one person calls her Edith in the family, everyone will start and next thing you know, your husband and MIL get what they wanted and her name is Edith.”

They went on, “You need to put up boundaries with your MIL because she’s already overstepping and seeing the child as hers…even if it is reincarnated. Also, be careful with both your MIL and your husband because I wouldn’t be surprised if they tried to change the name on the birth certificate if/when you are incapacitated. I think you need to have a sit down with your husband too about how he was lying to you about what you were going to name the child. That’s quite a big betrayal if he had named her without you. Don’t just ignore that. If he doesn’t agree with something you are doing with your child, is he going to secretly do something else? Boundaries are important and in laws can be insane. Be careful.”

This is such a tricky situation, with hurt feelings all around. Hopefully everyone here can learn to leave the drama behind them before baby Edith/Jane is born.

Before you go, check out these wild stories about Reddit’s most horrific mother-in-laws.