Neon White's first episode is pretty much just one big tutorial. That being said, you may be surprised to find that these tutorial levels are far from easy to complete with a good time. Thankfully, Neon White is loaded with little shortcuts that will make your life easier as you try to obtain those quick runs.

Of course, you could shave off seconds from your best runs, and slowly work your way toward unlocking the level hints. Those hints will tell you exactly where those juicy shortcuts are. But why bother with all of that when we can clue you into the fastest routes from the onset? If you are looking to grab those platinum medals, this is the guide for you. 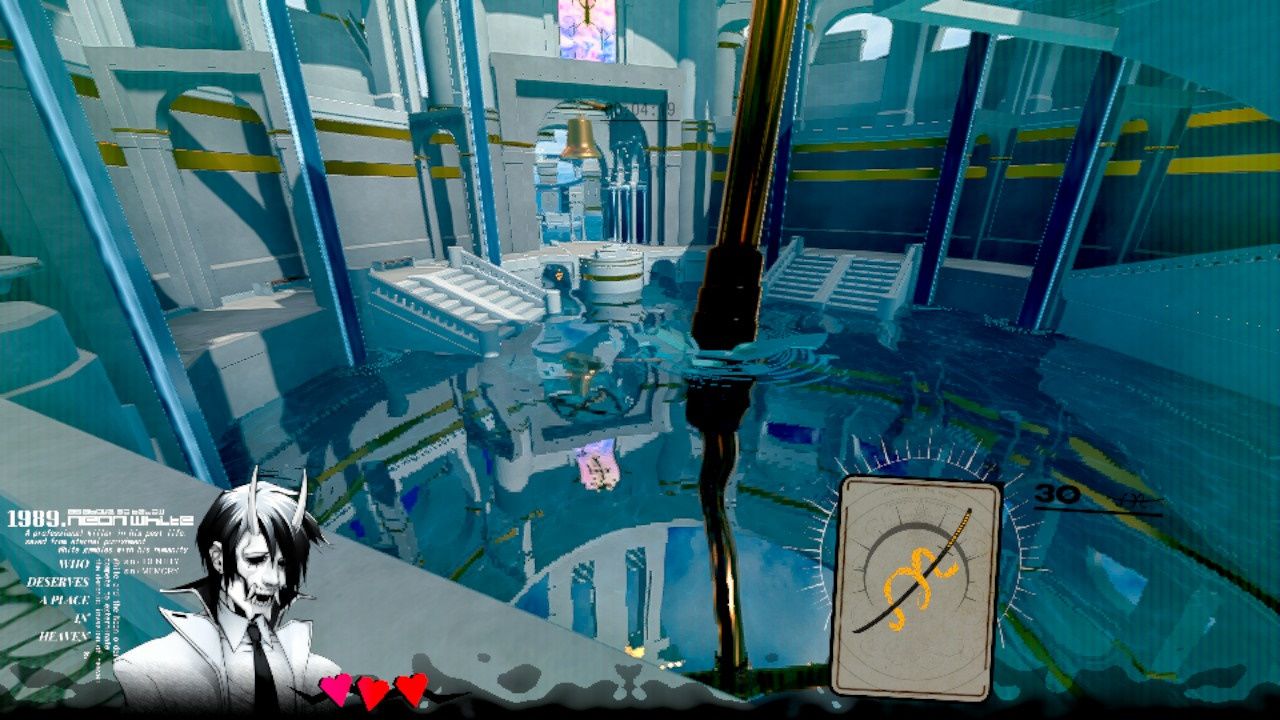 There are two shortcuts here. The first thing you need to do is hop over the railing at the beginning of the stage. Dead ahead there will be a little tunnel that will lead you through into the next area. 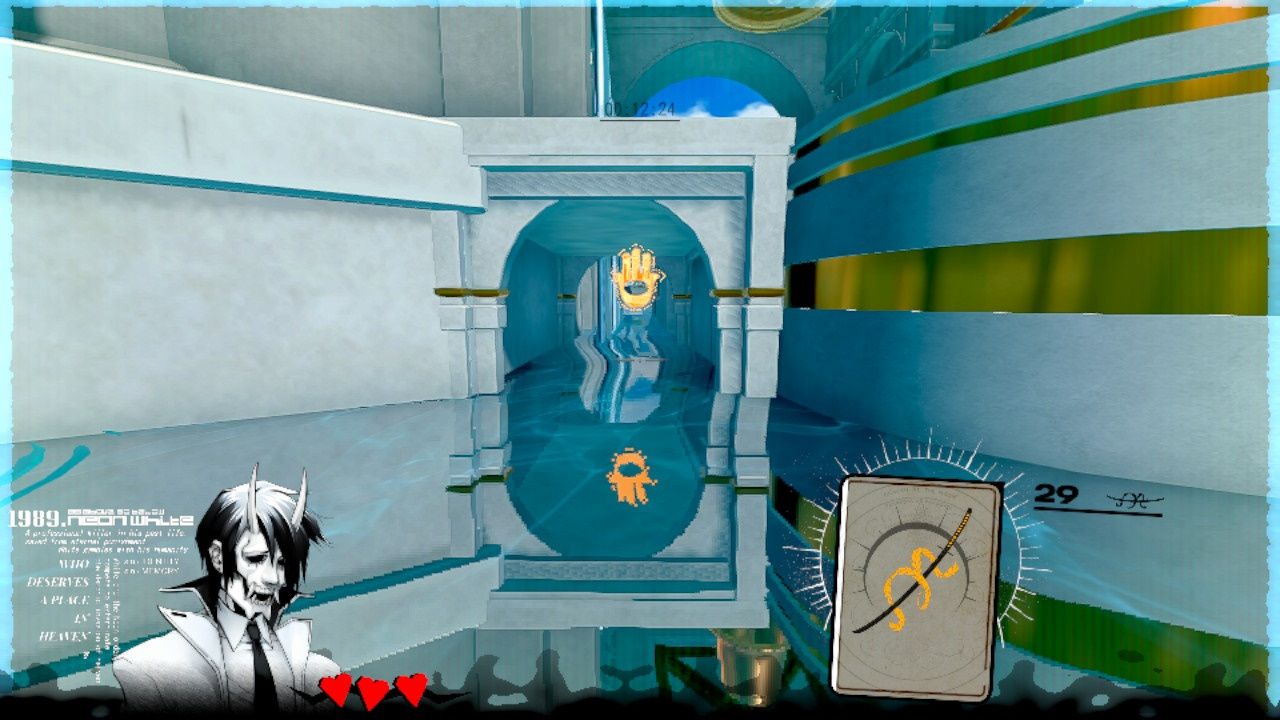 From here, stay on the water as much as possible, as it will help you move quicker. 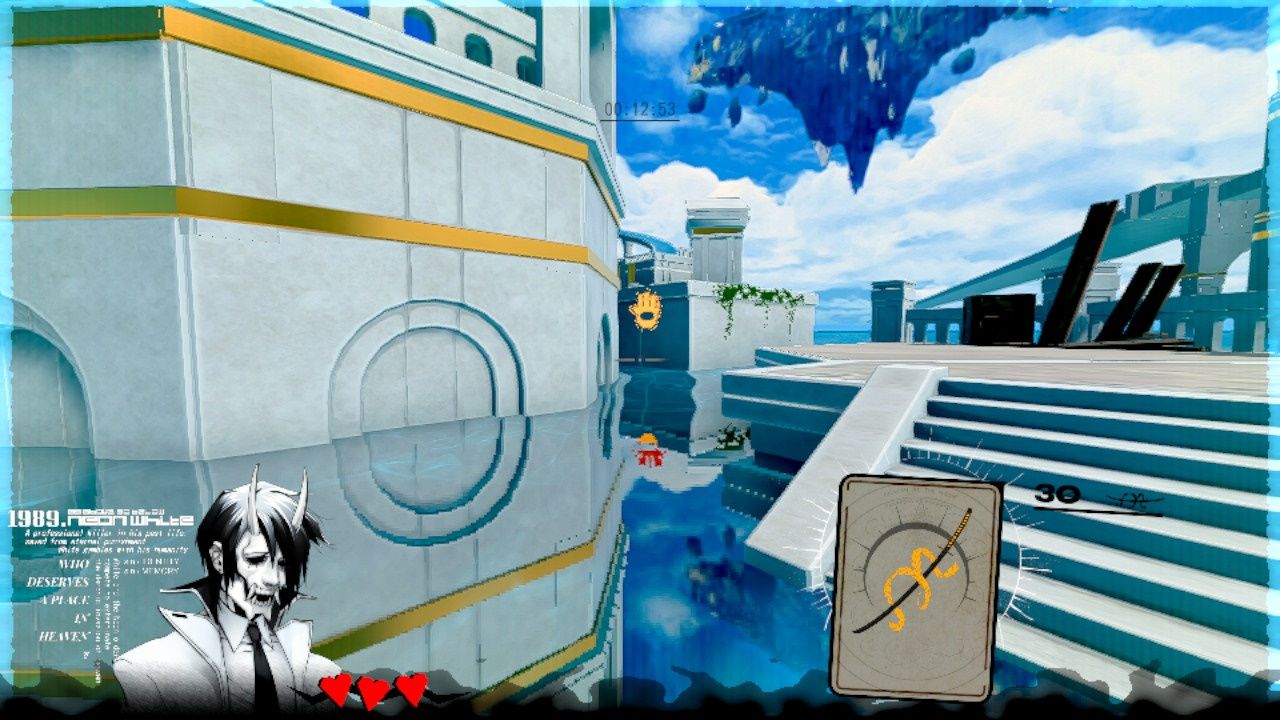 Don’t climb the platforms, stay on the water, and follow the path under the stairs, when you see a stack of crates. Jump up on those crates and you should be right at the end of the stage. 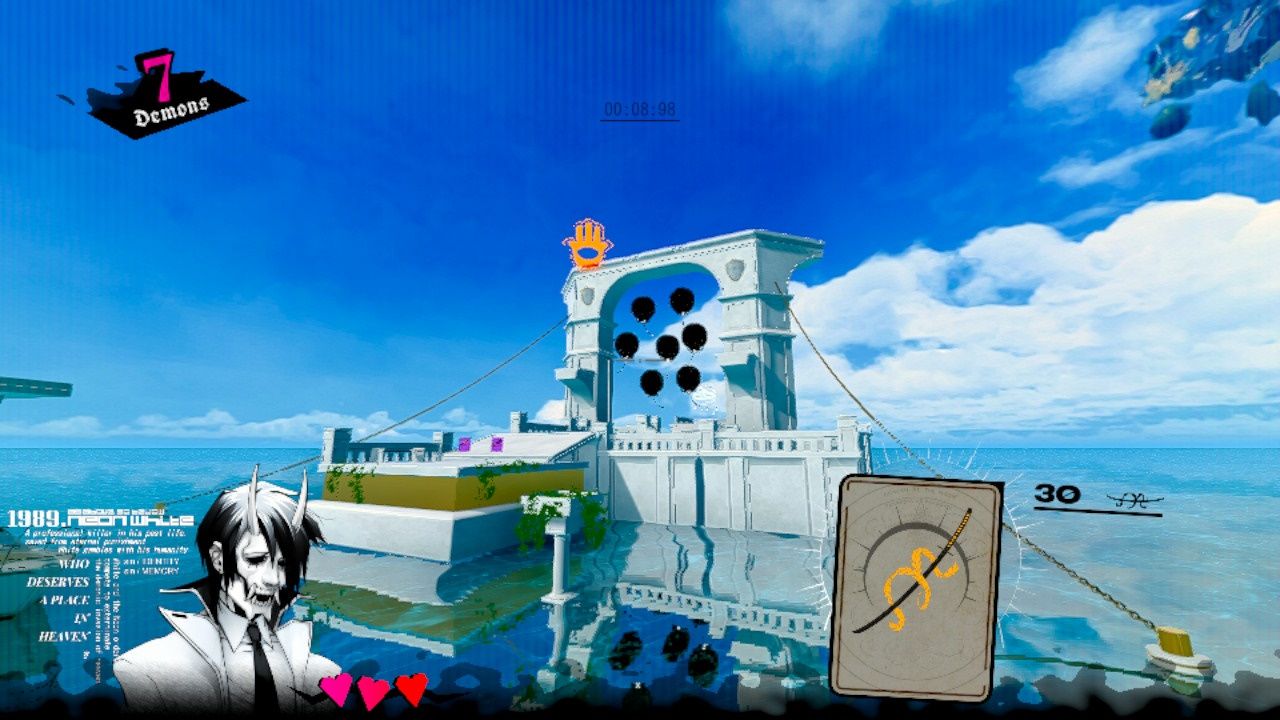 There are two shortcuts in this level. The first (which the hint will show you) has you jump to the lone column at the beginning of the stage and hop across to where the assault rifle cards are. 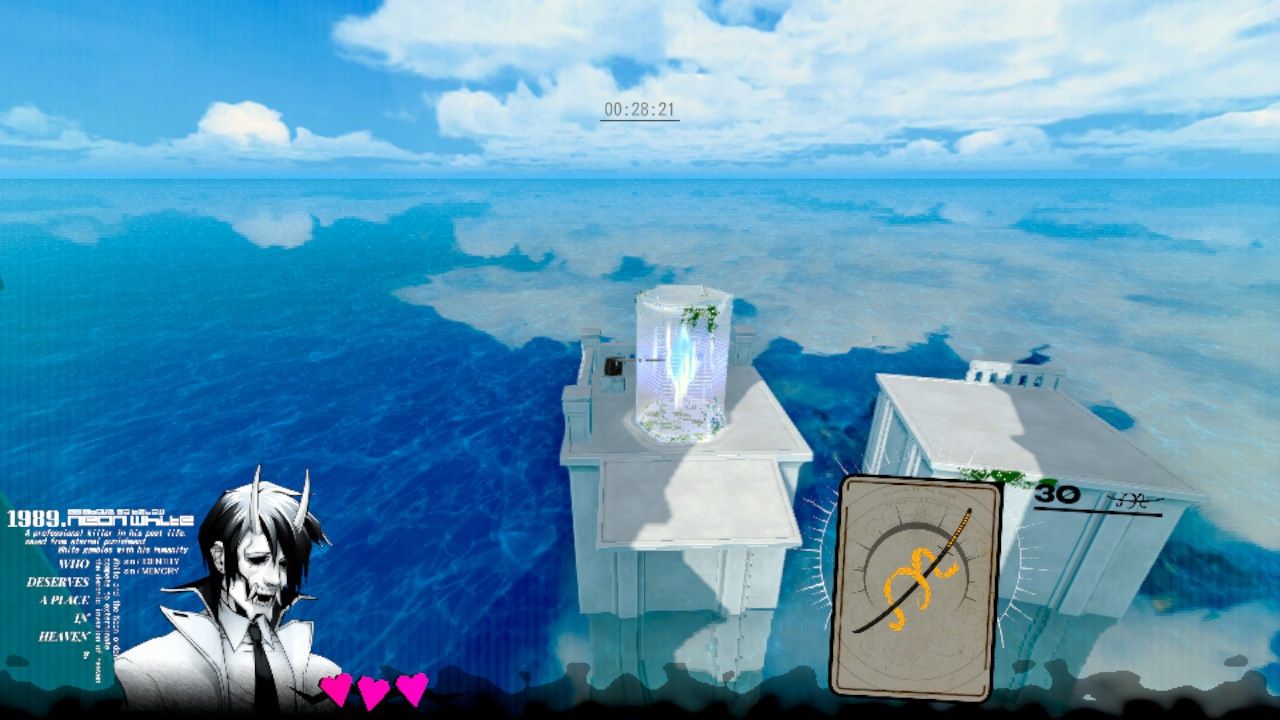 Then, after you take out the balloon enemies, all you need to do is use your discard power for the assault rifle to plant a bomb and then jump. The explosion will propel you across the gap leading to a fast finish time. Just make sure you are in the air before the explosion goes off or you won’t be able to make it across the gap.

When taking out the balloon enemies, use one of your assault rifle discards to plant a bomb on the center demon in the group instead of aiming at them individually. This will cleanly take care of the whole bunch and save you seconds. 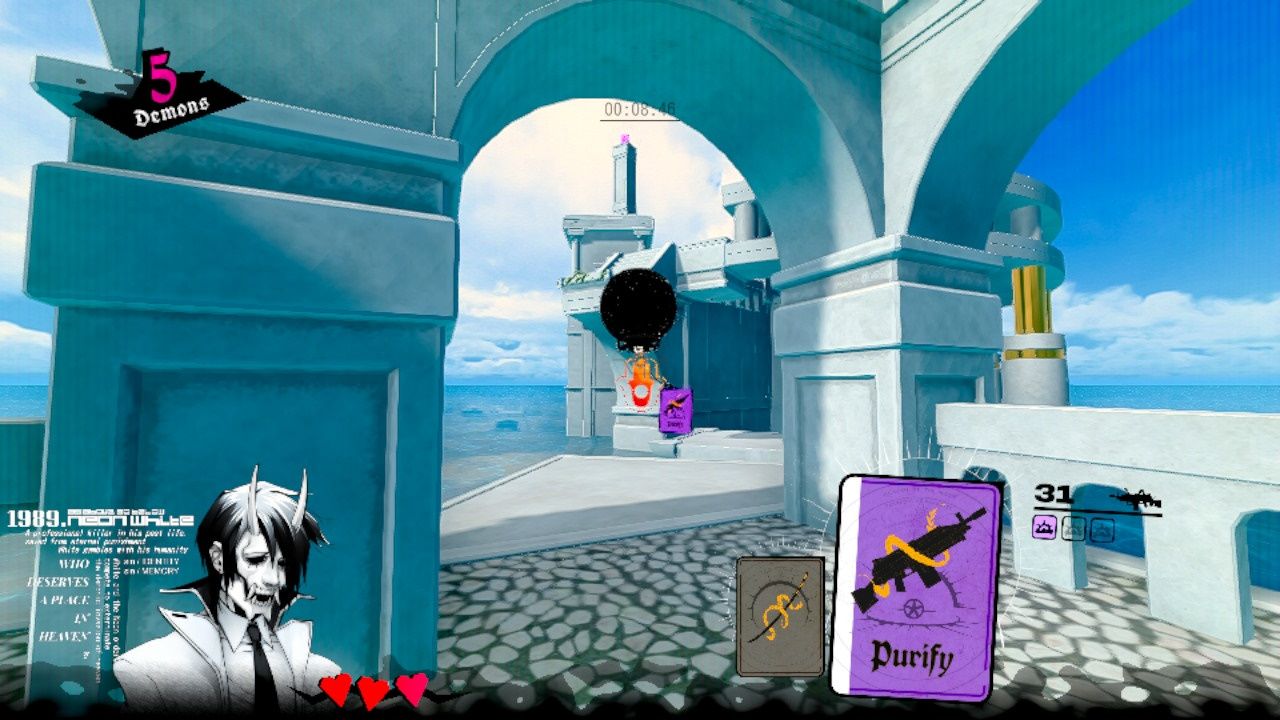 This shortcut is pretty simple. At the beginning of the stage, there will be a balloon-type enemy (they are the second demon you will encounter). All you need to do is jump into them, and they will propel you to the end of the stage. However, there is a bit of a trick to getting a great time still. You skipped the majority of the stage, but this means that you will miss two enemies that you would have normally encountered. 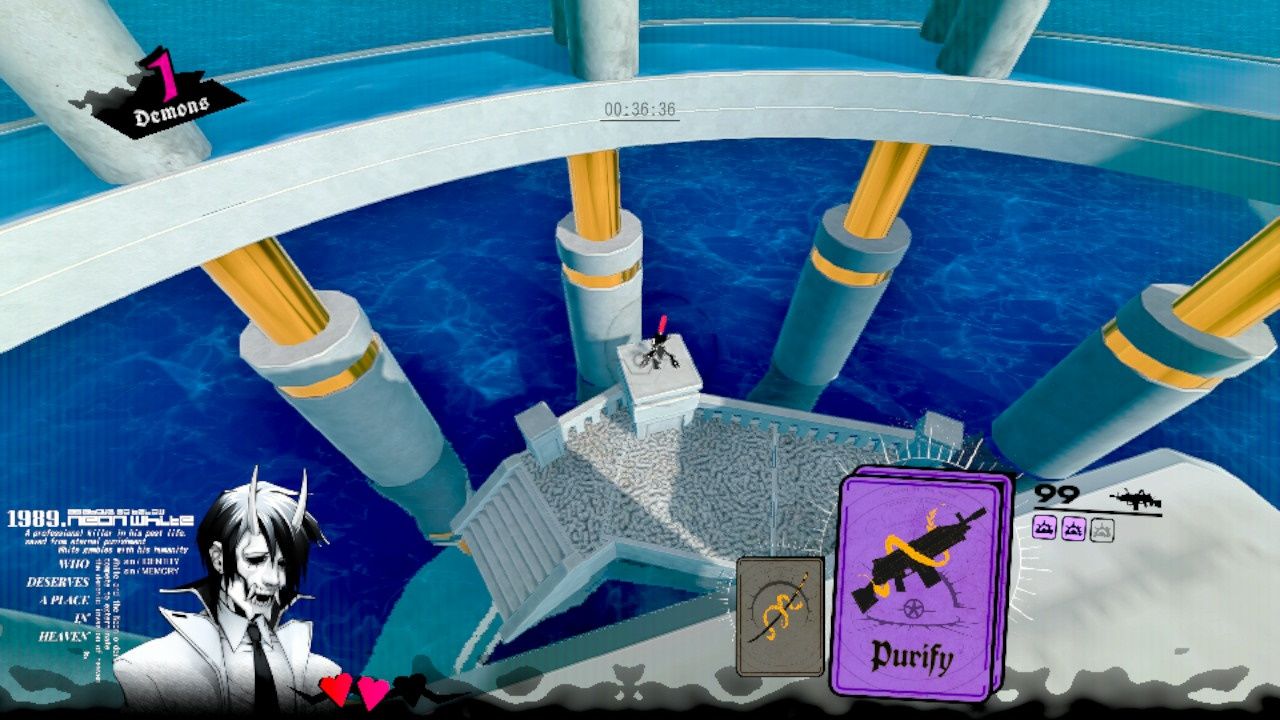 One will be to your left once you reach the top, the other, you should be able to shoot relatively easily. The other will be to your right. You will actually have a pretty good shot at them from the stage exit. You will probably need to attempt this one a few times before you are able to get your platinum medal. 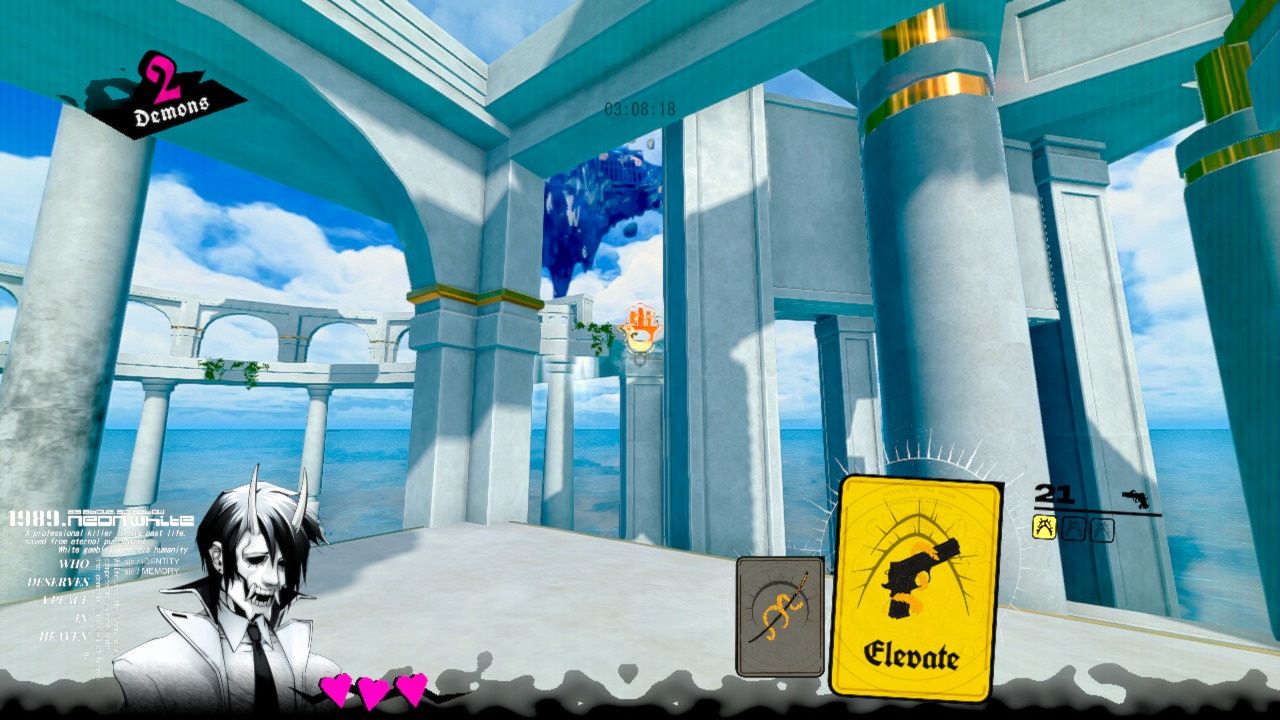 The shortcut will be to your immediate right once you hop up to the raised platform at the beginning of the level (so, immediately after you use your first discard ability to use the “elevate” double jump).

However, before you jump across the gap (avoiding half of the stage) you need to take out the demon below you and to your left. Then, after clearing the gap, continue the stage as you typically would. 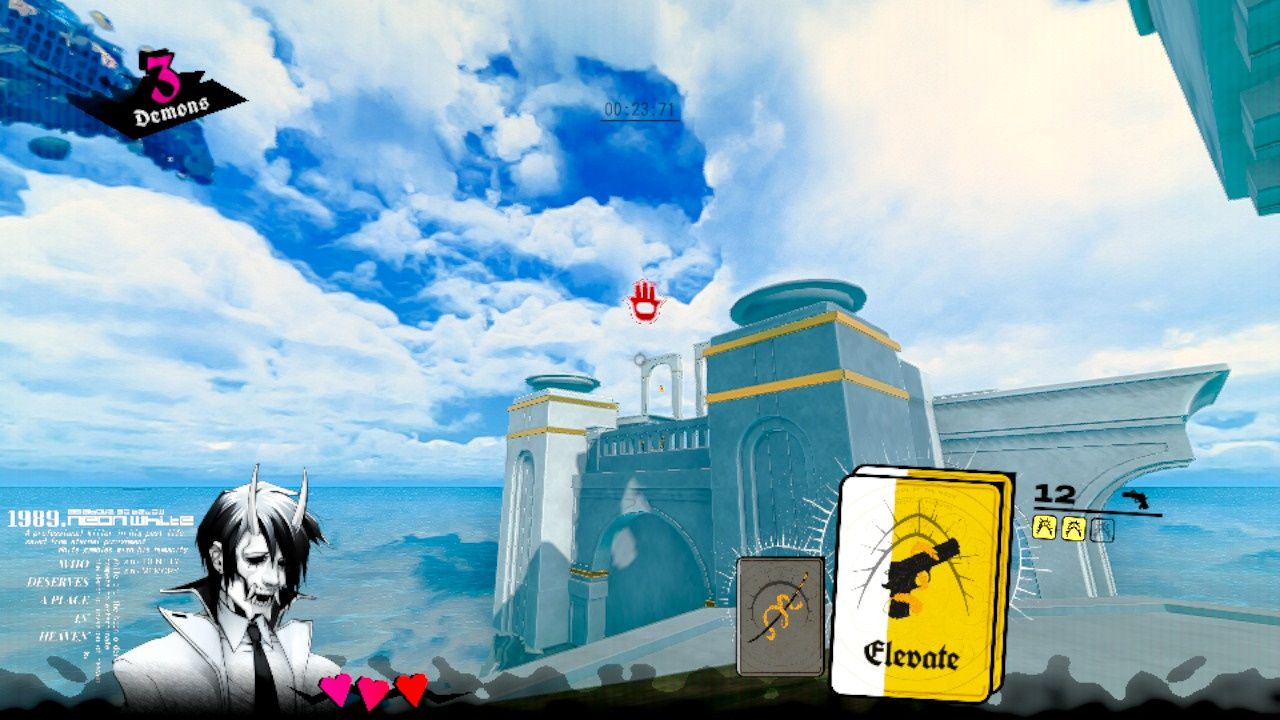 This is a really minor shortcut. While you would typically take out the first two demons and jump across the gap where the handgun card is levitating, you will instead take out the two enemies and jump across the gap on your left. You are basically just rounding the corner off here. All told, this shortcut probably saves you about a second. Though, to be fair, this is a very short stage, so that isn't insubstantial. 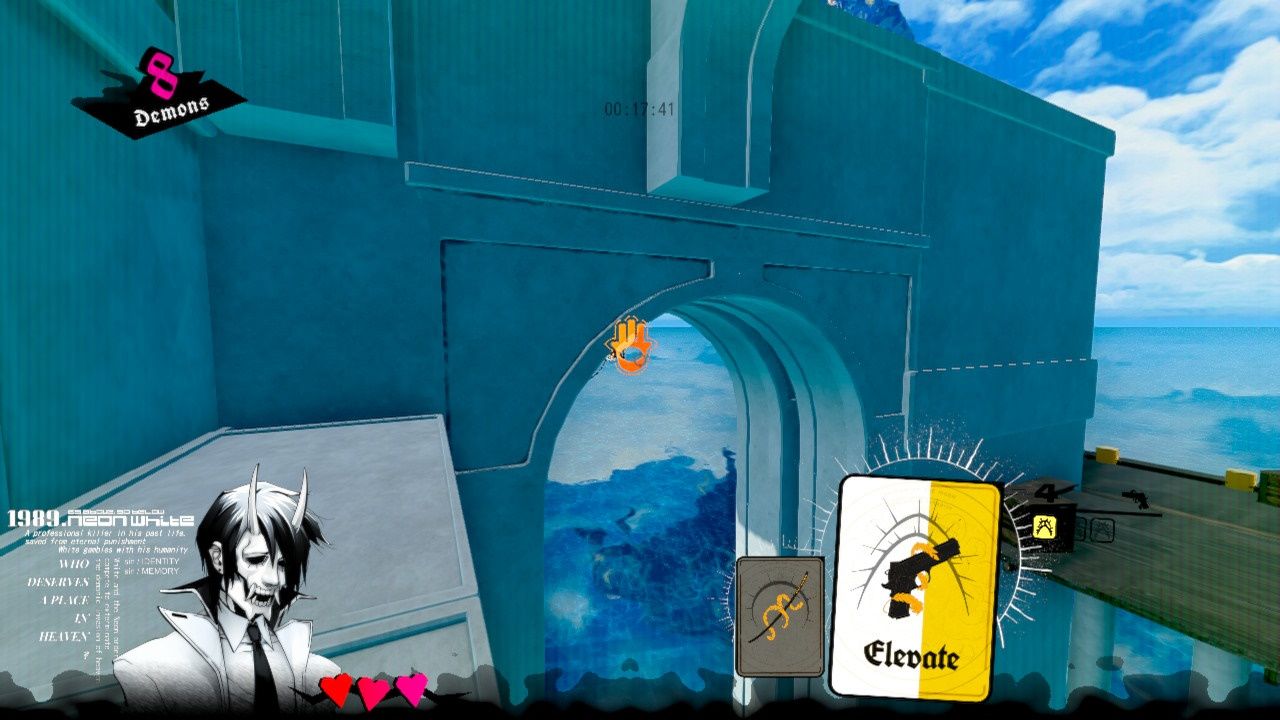 Play through the level as you typically would. However, after acquiring your first card, don’t jump over the gap. Instead, take out the demon from afar, and jump to your left under the arch. Use your double jump to leap into the first in the line of balloon demons. Then continue the stage as you normally would. This will shave seconds off of your score. 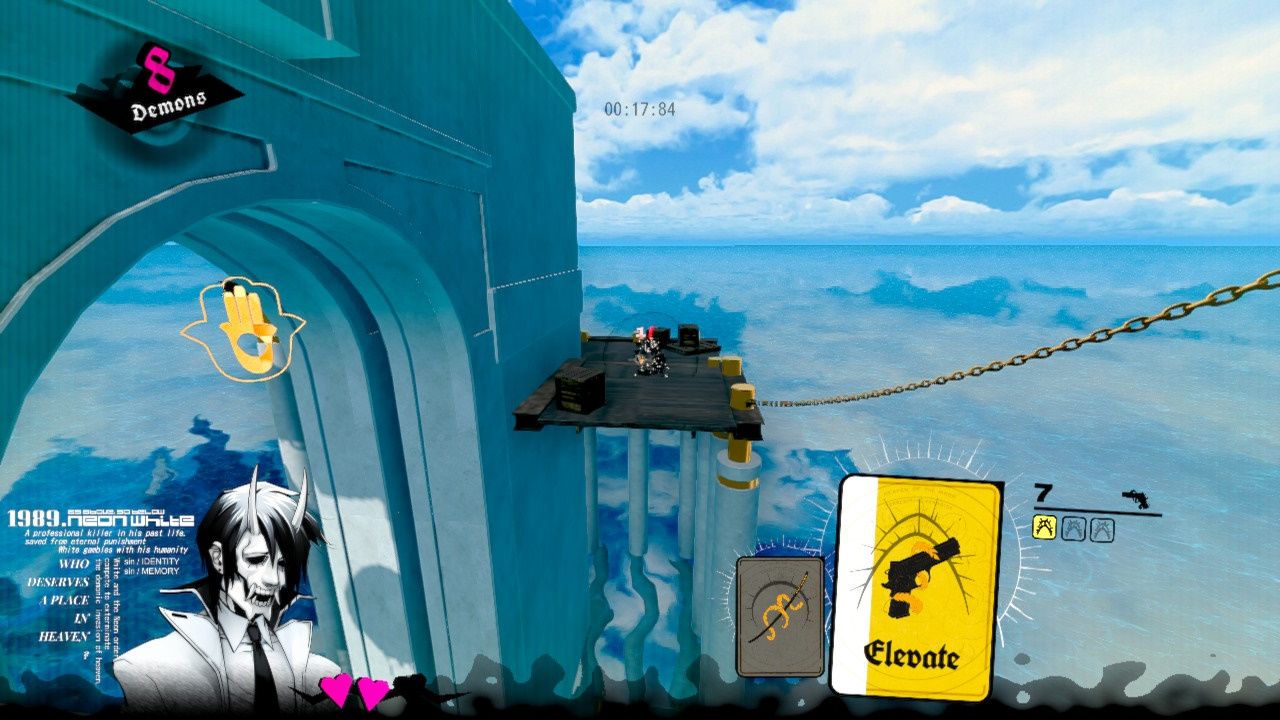 One thing to keep in mind is that you don’t have any spare cards here. So you need to take out that demon across the gap without fully exhausting your pistol card (as you will need to use the discard ability). This may be one of those moments where you will be better off taking a second to line up your shots. 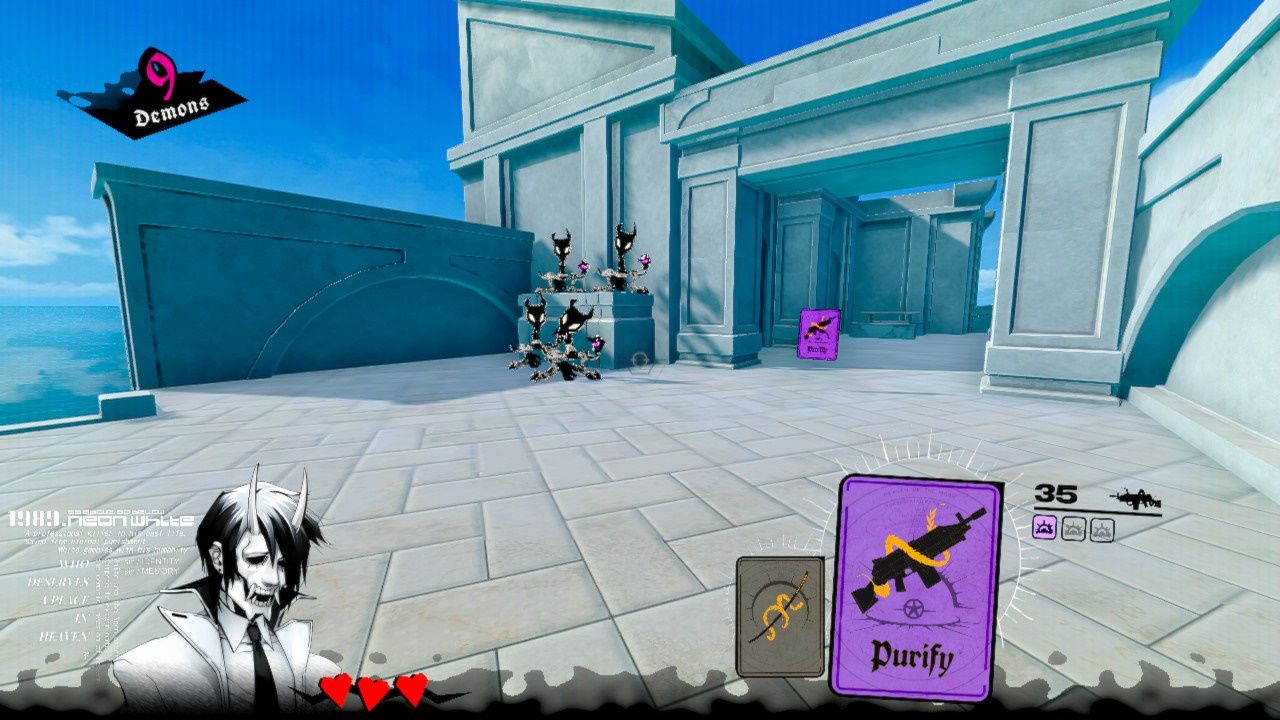 This is a tricky, skill-based shortcut. When you see the first group of enemies clustered to the left, you aren’t going to use your discard ability to blow them up right away. Instead, you want to get close to them. Grab the second assault rifle card. 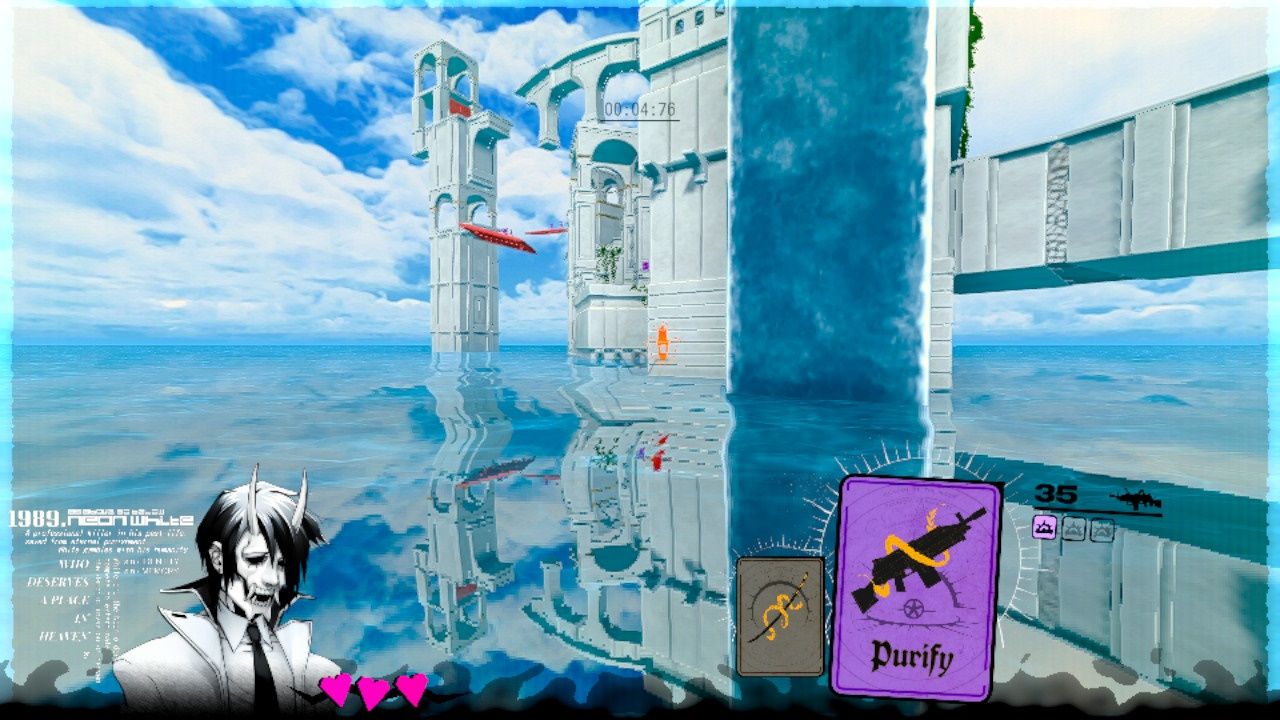 For starters, instead of using the first assault rifle card to jump up to the next level, grab it and travel to your left. Travel along the water until you see a platform low enough for you to reach with a bomb jump. Then, use the discard ability to do a bomb jump onto the lower ledge. This is a pretty sizable skip. 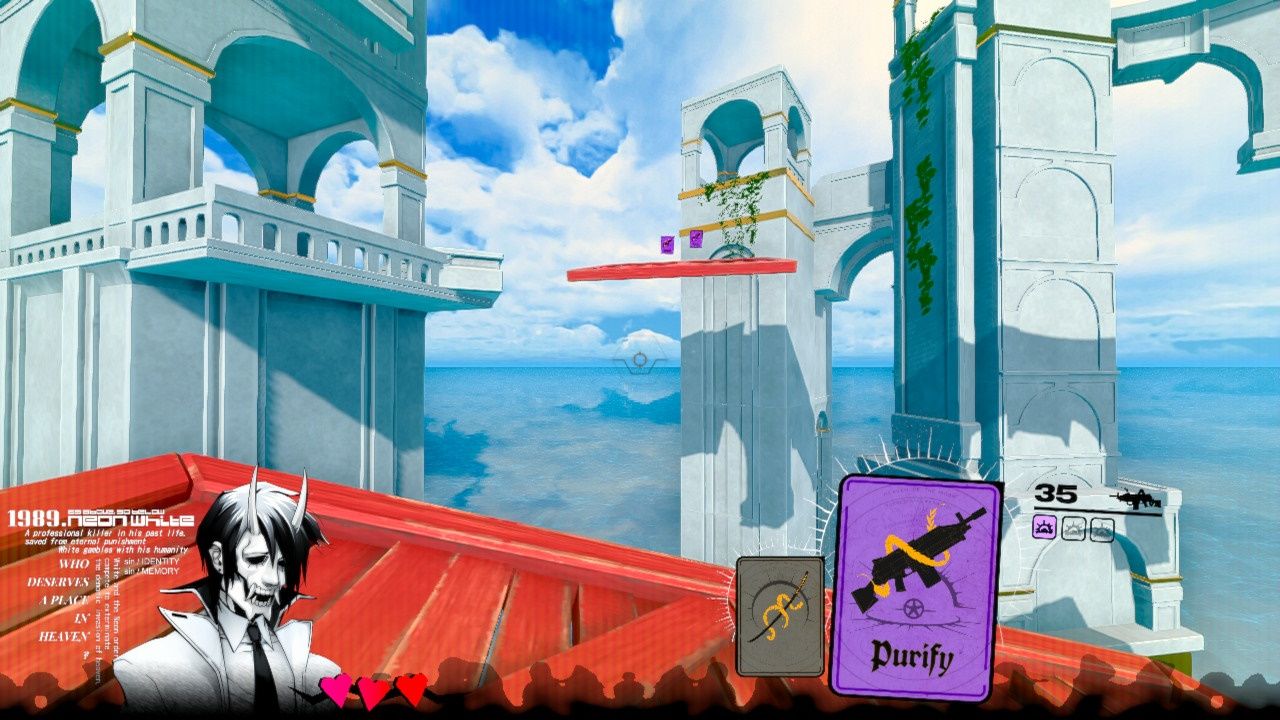 Another shortcut that the hints won’t actually point out is that you can use the bomb jump to get from the one floating red platform to the other. This will shave off another second from your time. 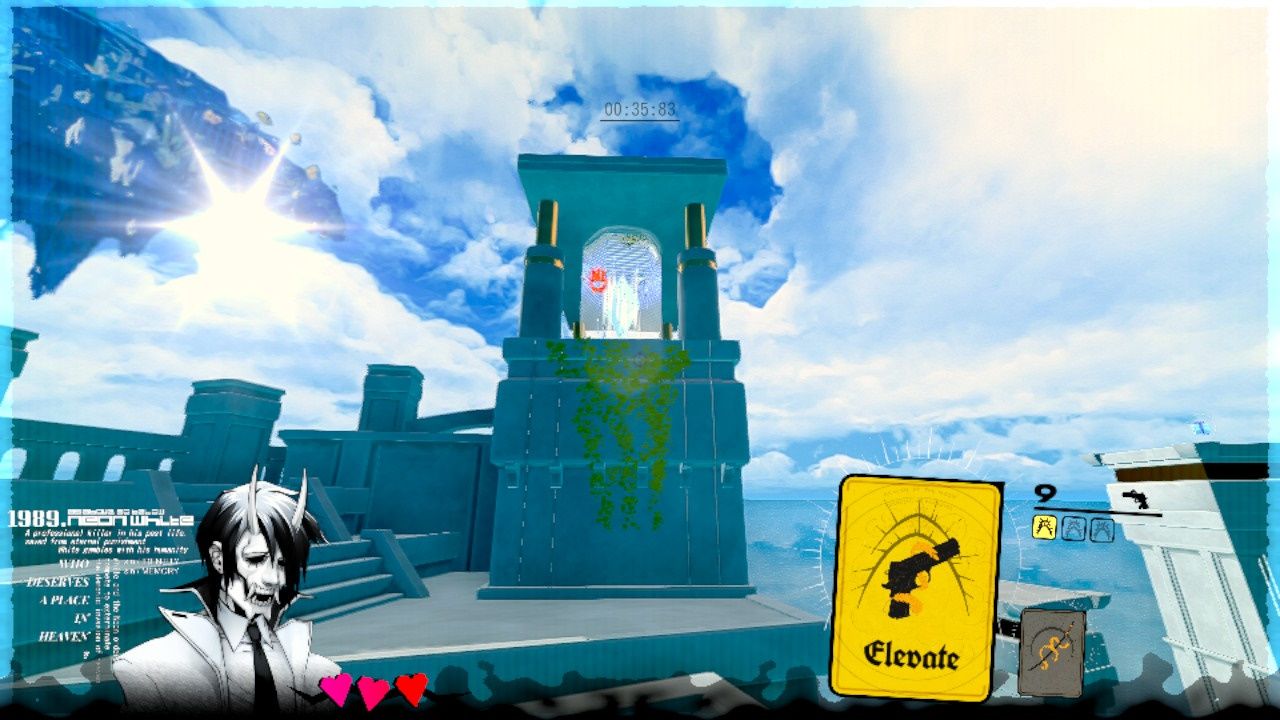 Use that assault rifle card to immediately explode the group, then, instead of circling around the ending portion using the stairs, use your remaining card to double jump into the level exit. It is so obvious that you will probably miss it without the hint icon. 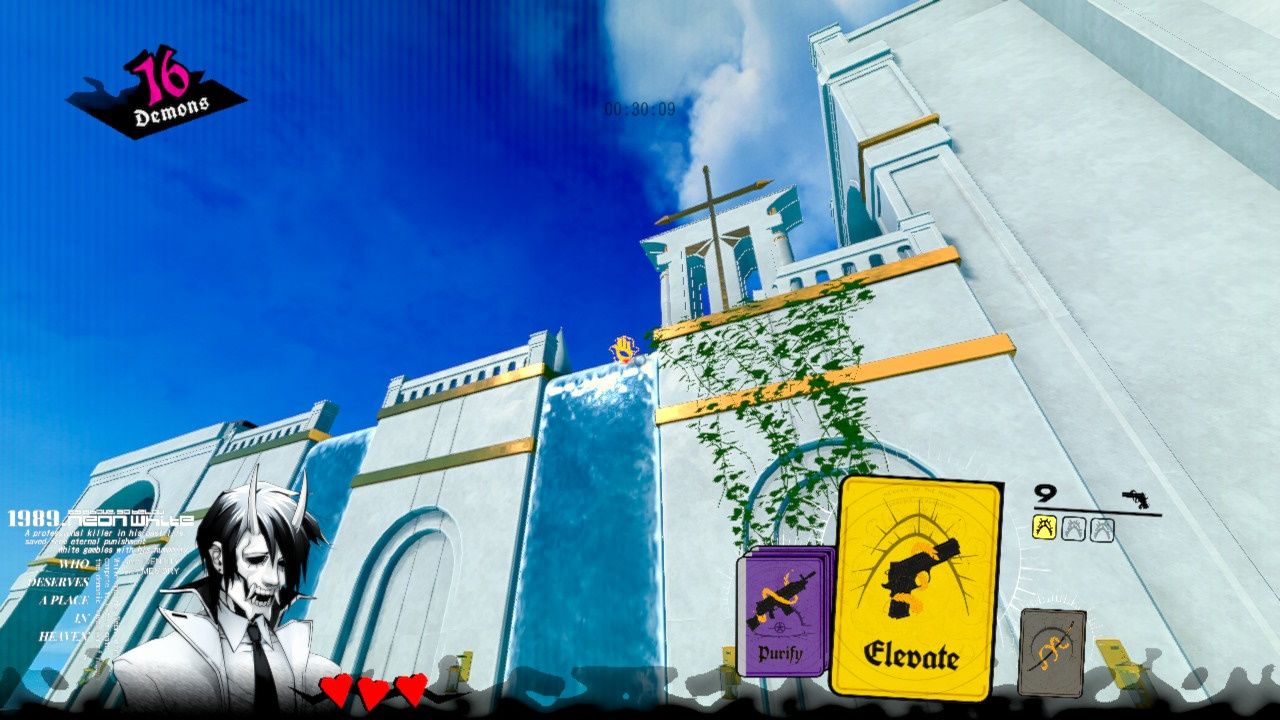 This shortcut is both super easy and a massive time saver. Right where the treasure chest is in the stage, look to your left. There is a little waterfall. You can use the discard ability on your assault rifle to do a bomb jump and clear the waterfall. This skips multiple platforming sections and can save you as much as ten seconds. Just make sure to kill the yellow demon just past the treasure chest before you move on.

At the end of the stage you can also use a bomb jump to kill the final group of enemies and make it to the stage’s exit. However, there is also a single enemy off to the side a little past that group, so make sure to kill them before you do this (as you don’t them a clear shot at them from the exit).