Another episode of Neon White, another grip of gifts that need collecting. This stage has a lot of falling, dropping, and slamming down. You will be navigating giant vertical levels. Some of these presents are really cleverly concealed. A number of them are on alternative routes altogether. Thankfully, by this point, you should be able to nimbly navigate these stages. And nimbly navigate you will!

Whether you are sneaking into concealed sunroofs or dashing under buildings and jumping through giant concealed holes, you are going to be platforming your way to a whole plethora of goodies. Thankfully, the platforming is all you will have to do, as this guide is more than happy to point you in the direction of every last gift! 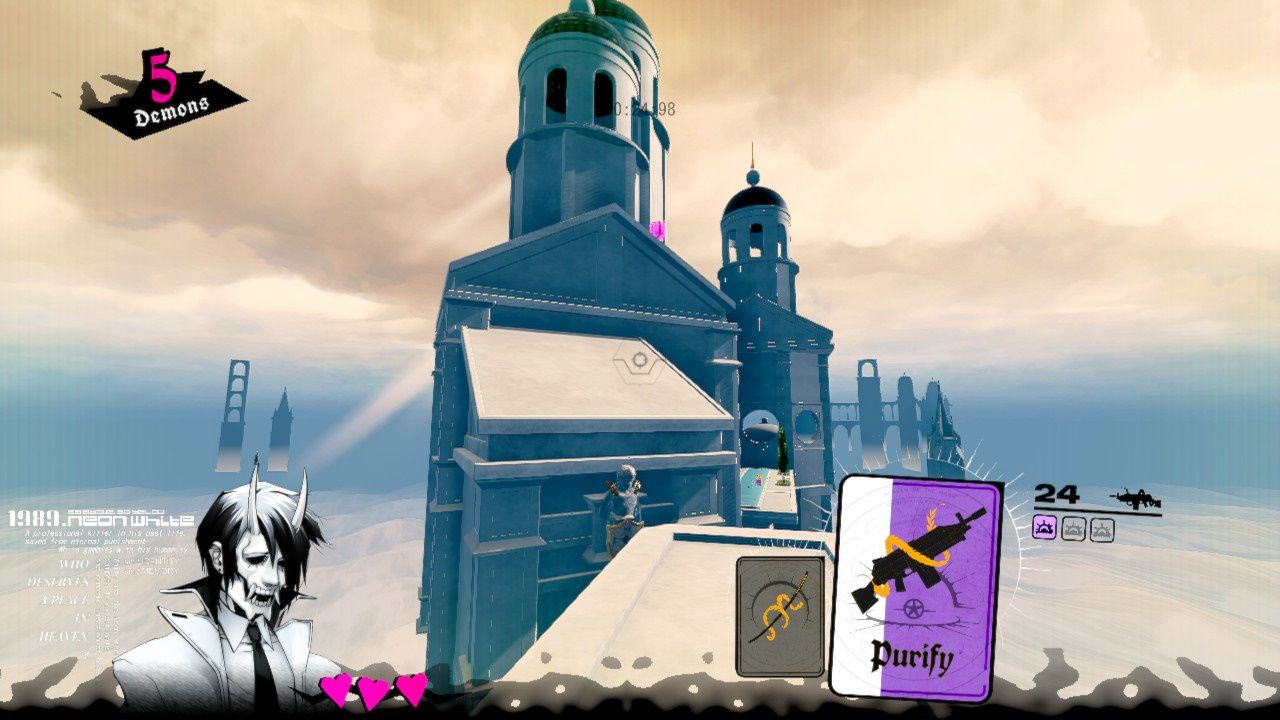 This is a nice and easy one. Right at the beginning of the stage, you will see a demon in a cage (that's a rhyme). Run around the demon on the stairs (don't take the shortcut, as that will require you to discard your pistol). Grab the assault rifle and shoot the demon (once again, don't use the discard ability). Make sure to not drop down into the caged area. 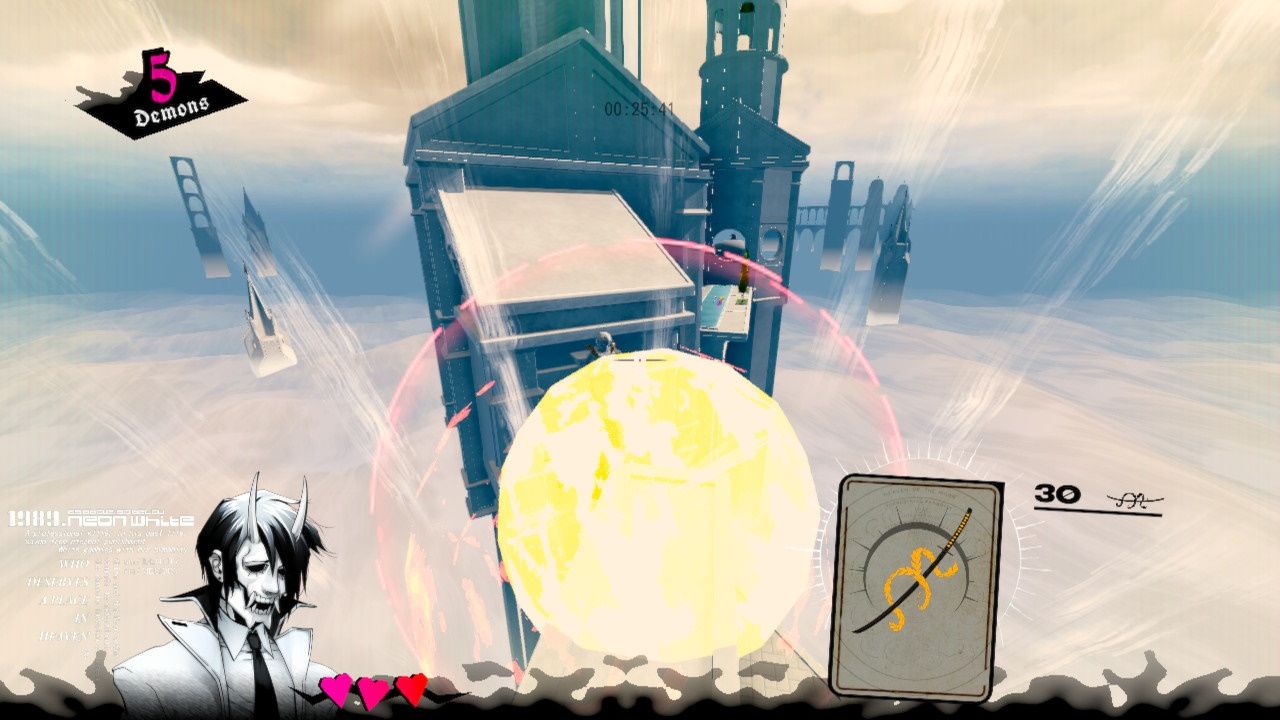 From here, circle back around and look for a ledge. Standing on that ledge, you will see the gift on the roof of the building opposite this one. Bomb jump over to that building, then use the pistol's discard ability to double jump over to the present and get a Tattletail Toy.

You can actually platform up to it without the pistol if you want, but it does make things easier. 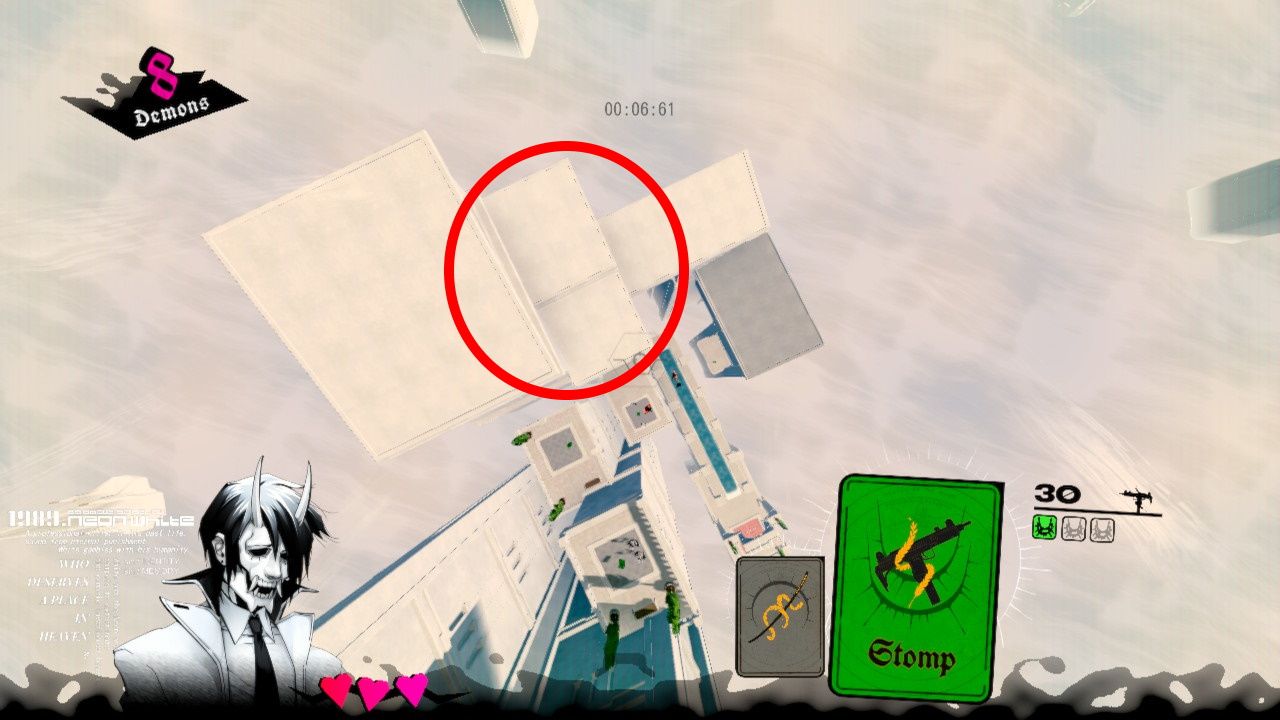 After you smash through the trap door at the very beginning of the stage, you will start a falling section. Just ignore the enemies and angle yourself to the left as you fall. You are going to see some steeply angled roofs. 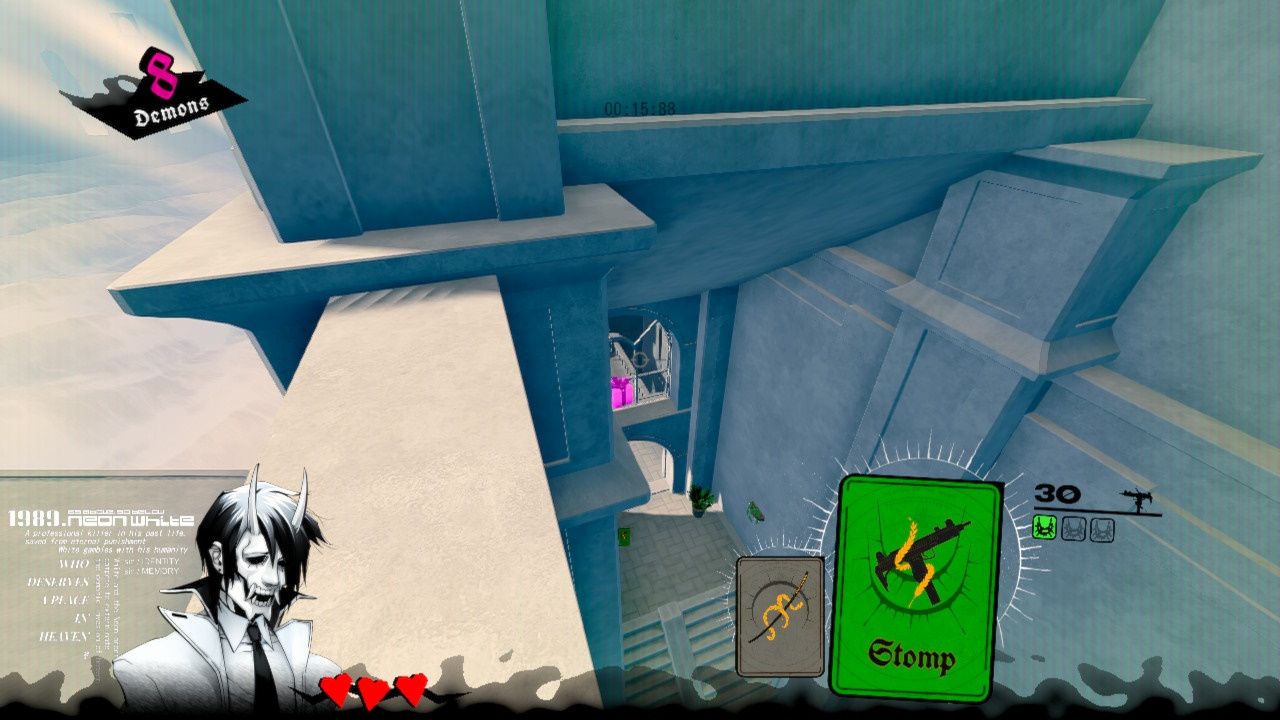 Once you are on the roof, hop over the edge and aim for the open window; try to land on the sill. From the ledge you are on, you will see a gift. Just jump towards it. You should grab hold of the Tattletail Toy. 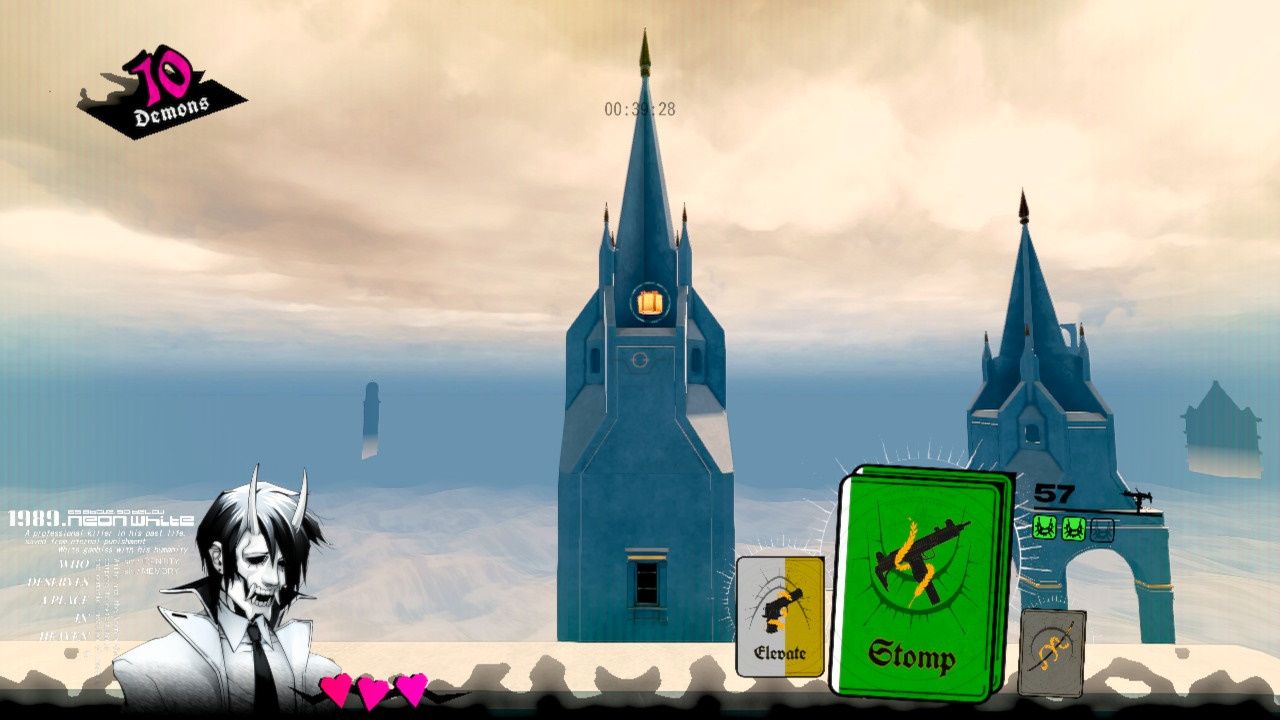 This is another one that is easy once you know where to go. At the start, there is a trap door. Don't take the bait and slam down. Instead, hop over to the roofs on your left. The present is sitting on a ledge across the way. Double jump over to it, and you will claim the Six Pack. 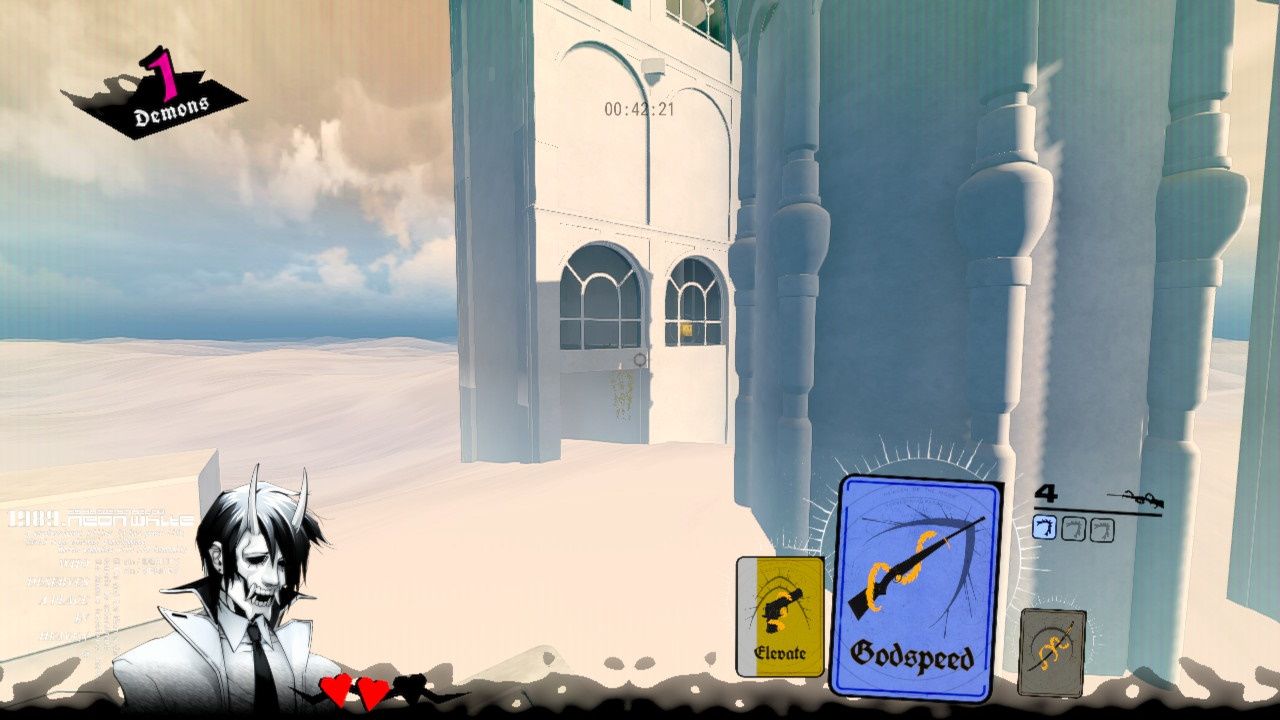 Play the stage as you typically would. Once you get to the section with the red wall, you have to not dash through it. Instead, shoot all the enemies. Now, shoot the vending machine in the corner and claim the pistol. Turn around to where you came from; you will see a building in the distance and, in the window, you will see the present. 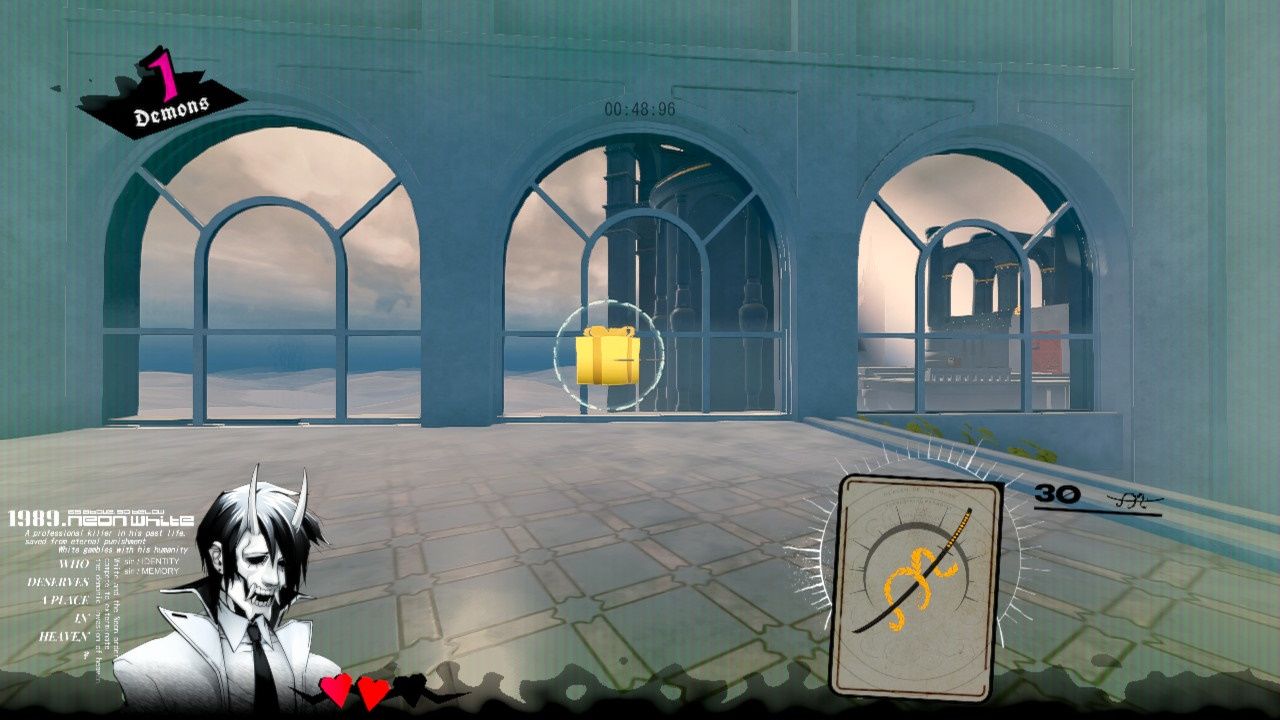 Jump towards the building, and discard the sniper rifle for the dash just as you are below the bottom of the building (aim for the left corner). Then, use the double jump to hop up into the room and claim the Six Pack. 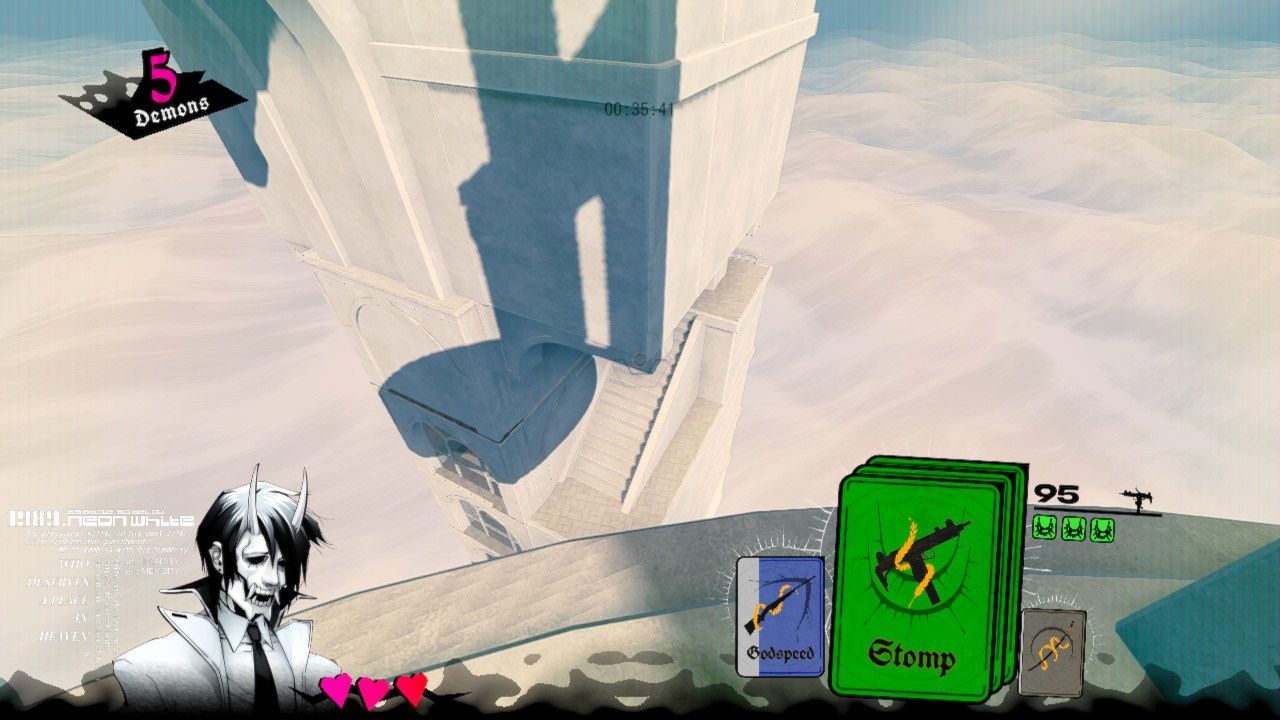 Work through the stage; however, you are going to only use one discard ability: on the first trap door. Now, continue until you are on the platform with the one green demon and the three lesser demons. Shoot them all. 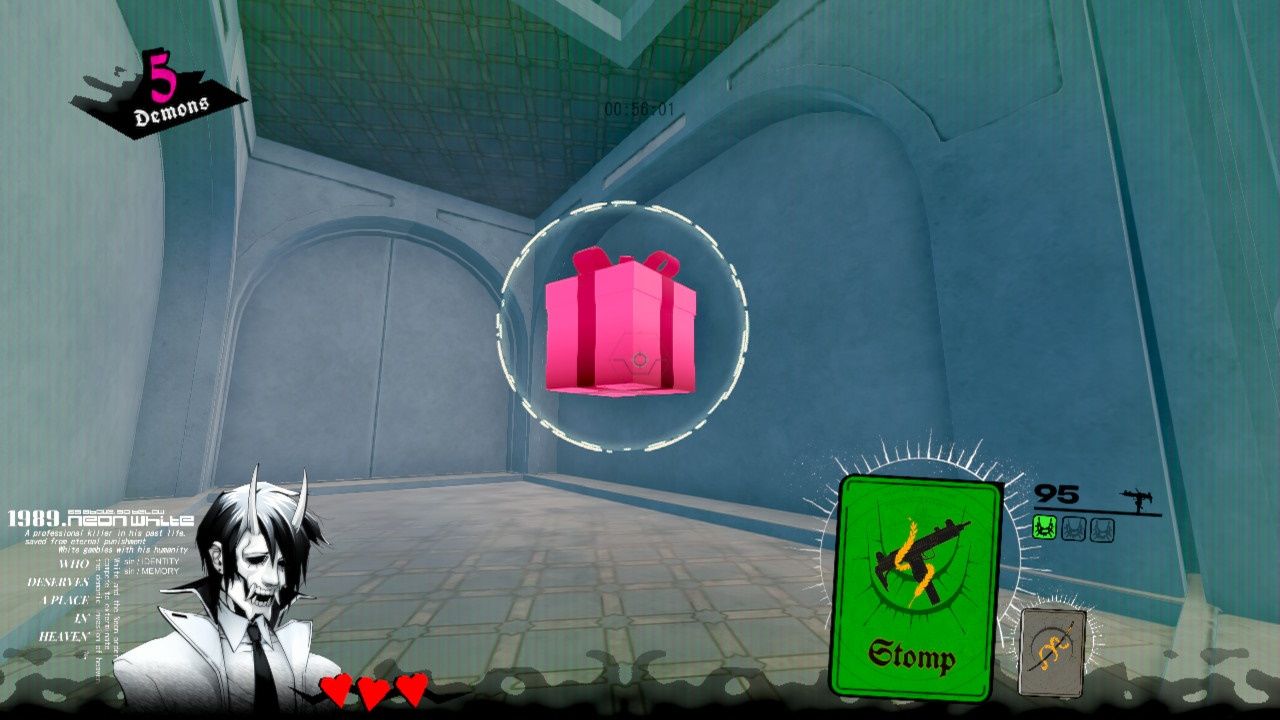 You should now have one sniper rifle and three SMGs. At this point, look down and to your right. You should see a set of stairs. Jump down onto them. From here, you will boost through a red wall, and smash through three trap doors. All of this will result in you claiming the Perfume. 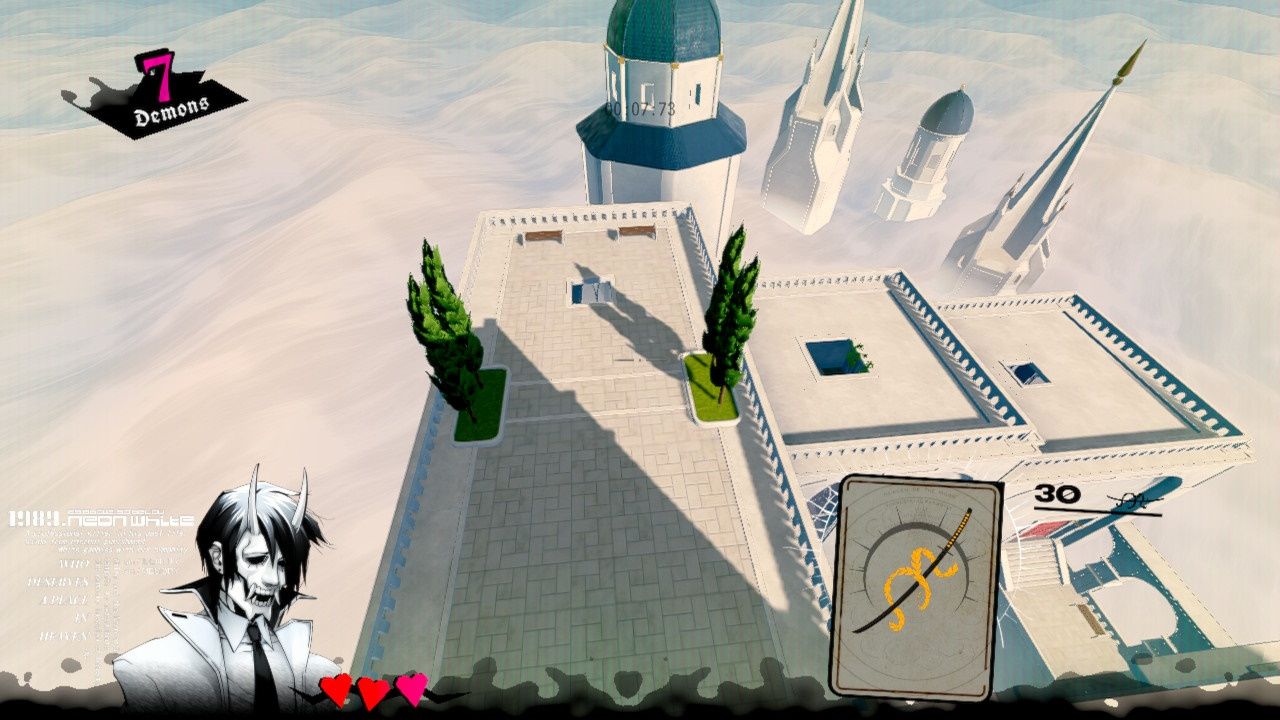 Neon White has officially decided to go easy on you with this one. When you start the stage you will be on a roof facing a treasure chest down below. Don't jump down! Instead, turn 180 degrees. You will see a number of roofs with skylights. 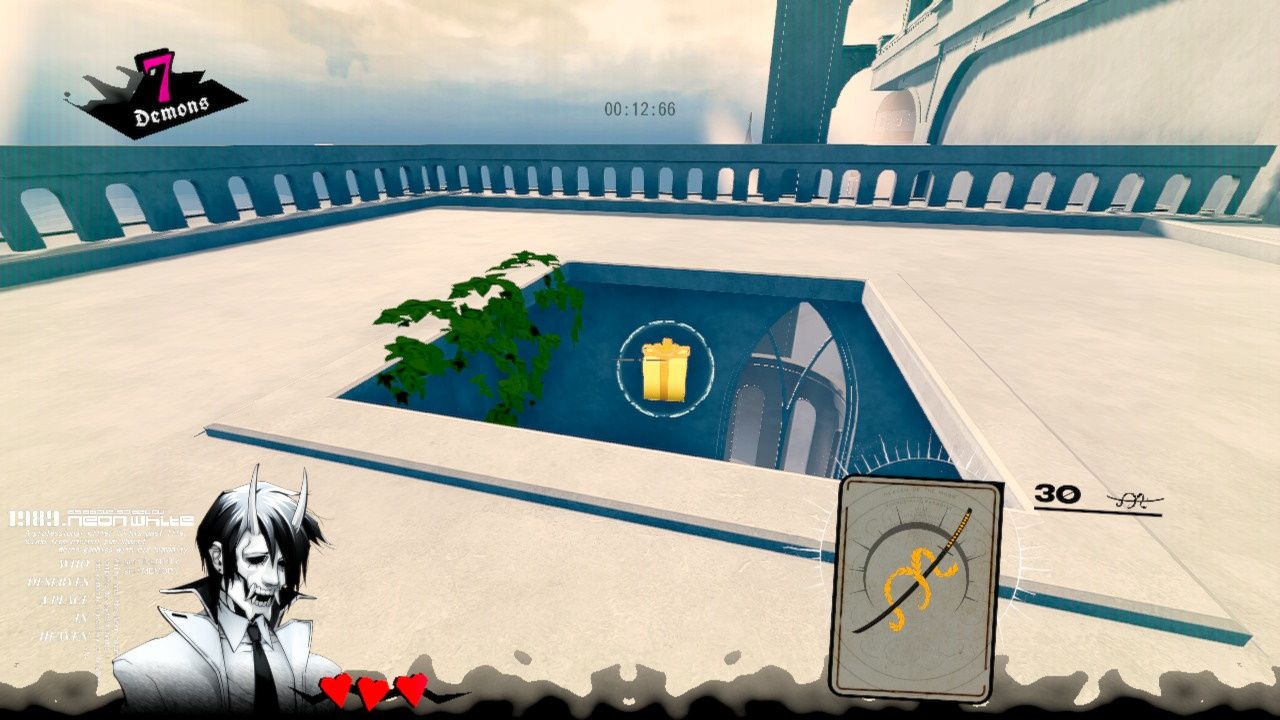 Now, jump down into that area. There will be three skylights. Go to the middle one. You will be able to see the gift hovering in the corner of the room. Hop down (angled toward the present). Grab it and enjoy your Six Pack!

Canals This stage makes getting this gift very easy for you. For one, there are a ton of vending machines for pistols spread all around the stage. So, you can stockpile three of them effortlessly. Now, in the final stretch, there are three lesser demons all positioned beside red barrels. All you need to do is take out the first two demons positioned on archways (just so they don't bother you). 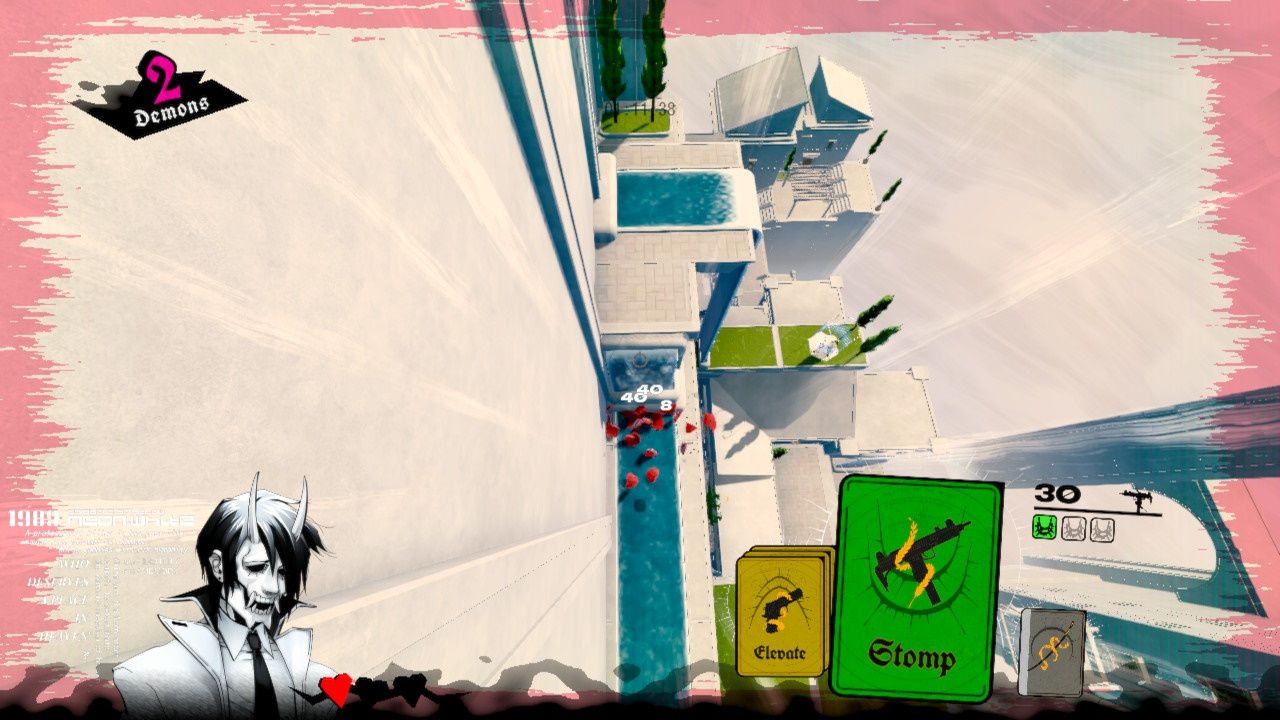 Now, you should have an assault rifle. Go up to the stockpile of red barrels beside the green demon at the end of the stretch of water. Use the discard ability to do a giant bomb jump. This is actually enough on its own to take you to the present. However, since you will have a stockpile of pistols, you can also discard those to compensate for any mistakes. Congratulations, you are now the proud owner of a bottle of Perfume. 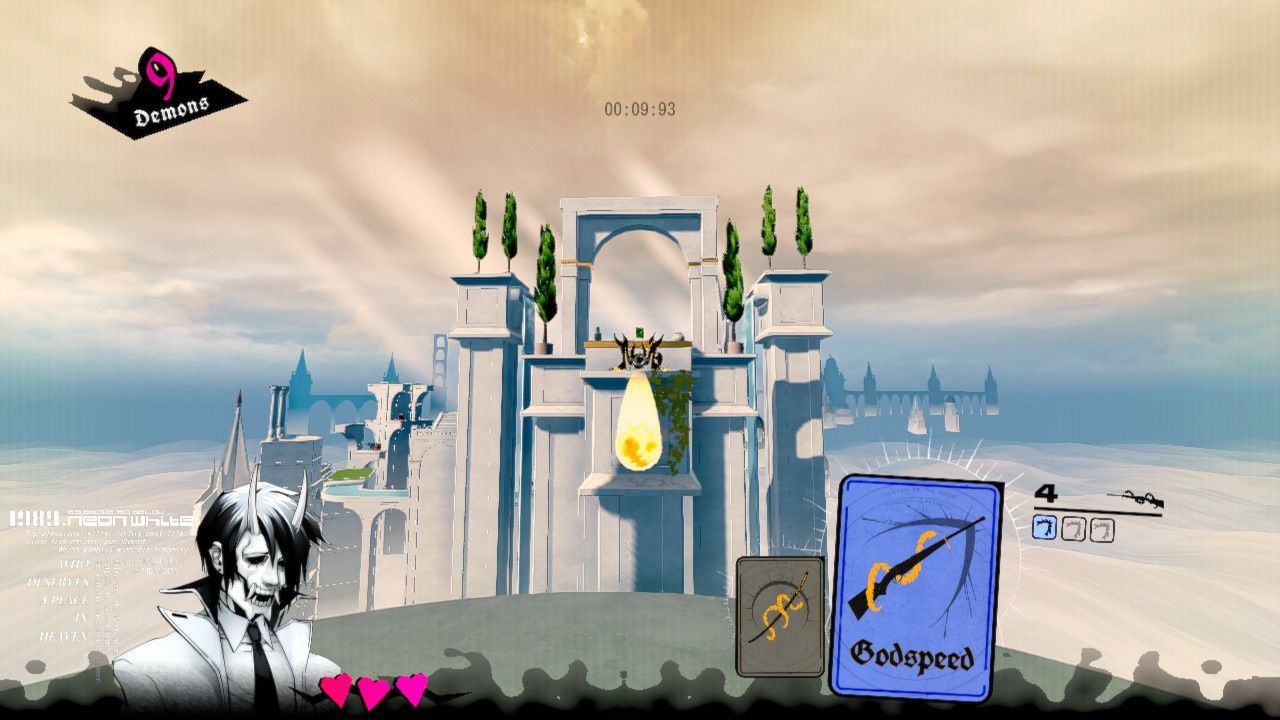 Continue the stage as you typically would. Once you get to the section of the stage with a yellow demon on a floating platform, take them out, but don't use the pistol's discard ability; you will need it. 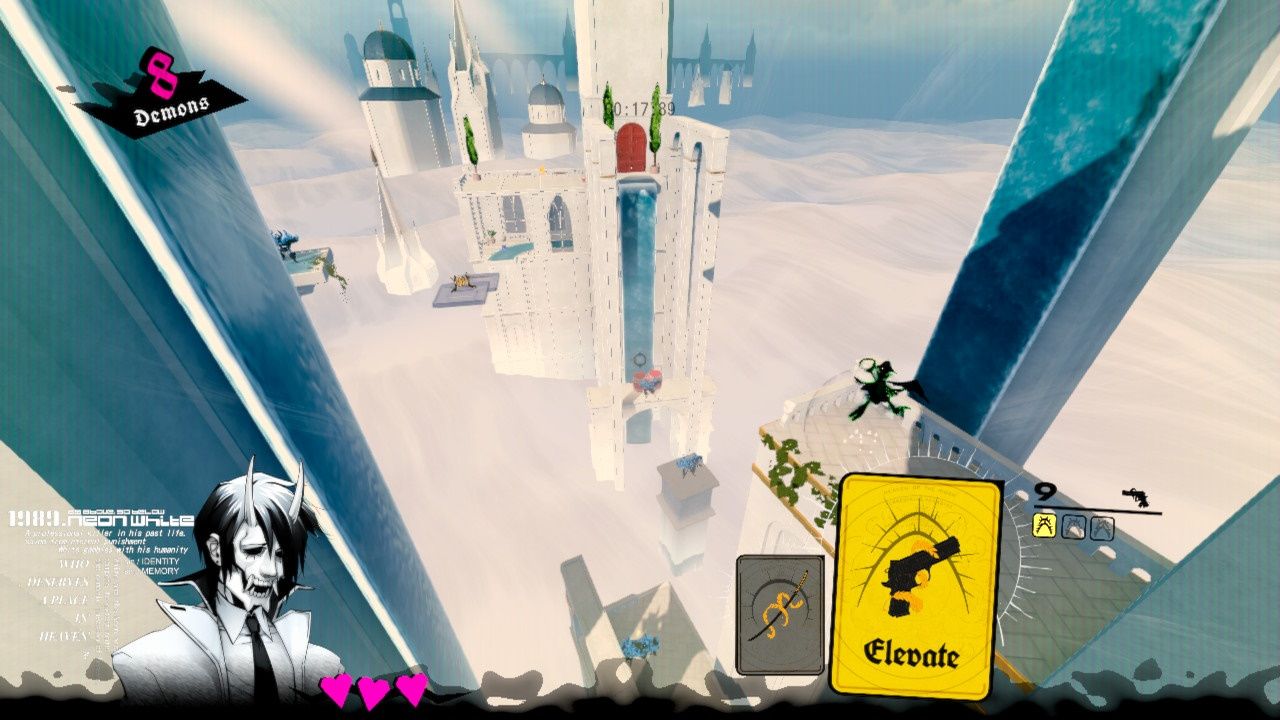 Now, jump down and hook around the structure in front of you (to the left). You will find yourself in a section with blue demons. Shoot a couple of them instead of dashing through them so that you can have a spare sniper rifle. 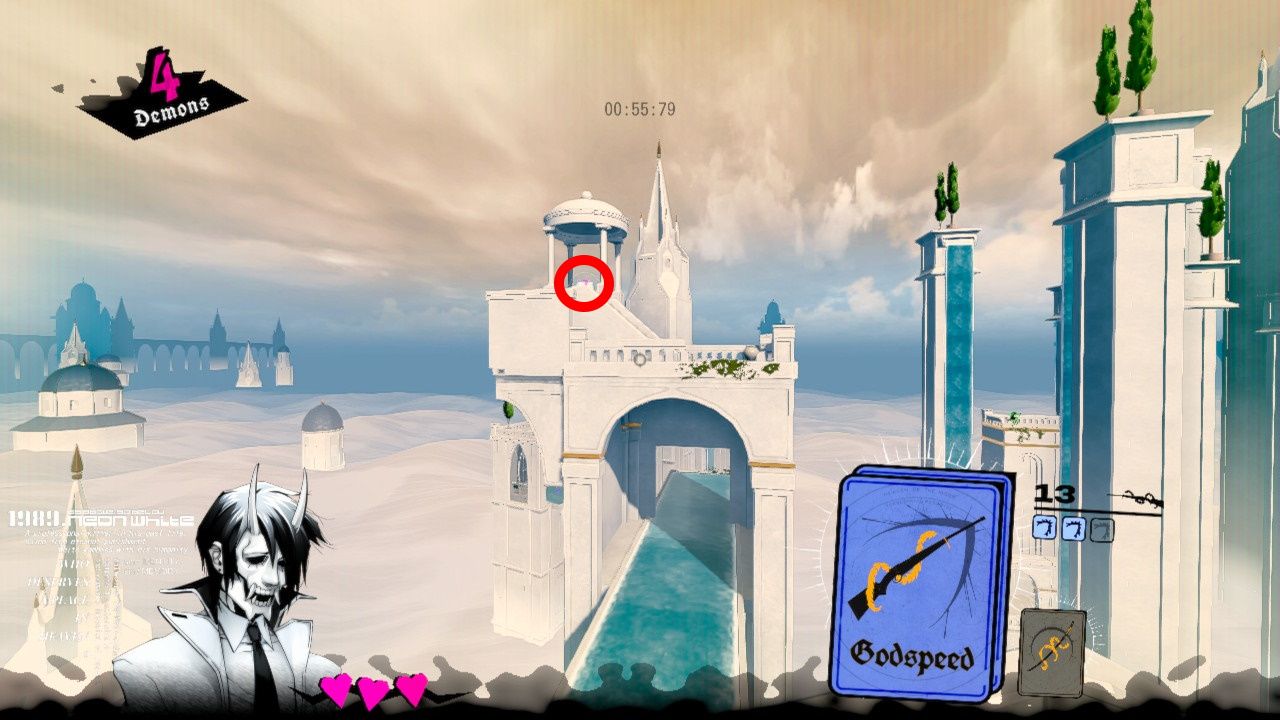 Now, continue until you are passed the area with the glass platforms. Once you blow through the red doors here, there will be a structure up ahead. Use that pistol that you saved to double jump up the structure. Now use a sniper rifle's discard ability to make it on top of the structure you just blew through. You can now grab hold of the Lucky Cat Statue. 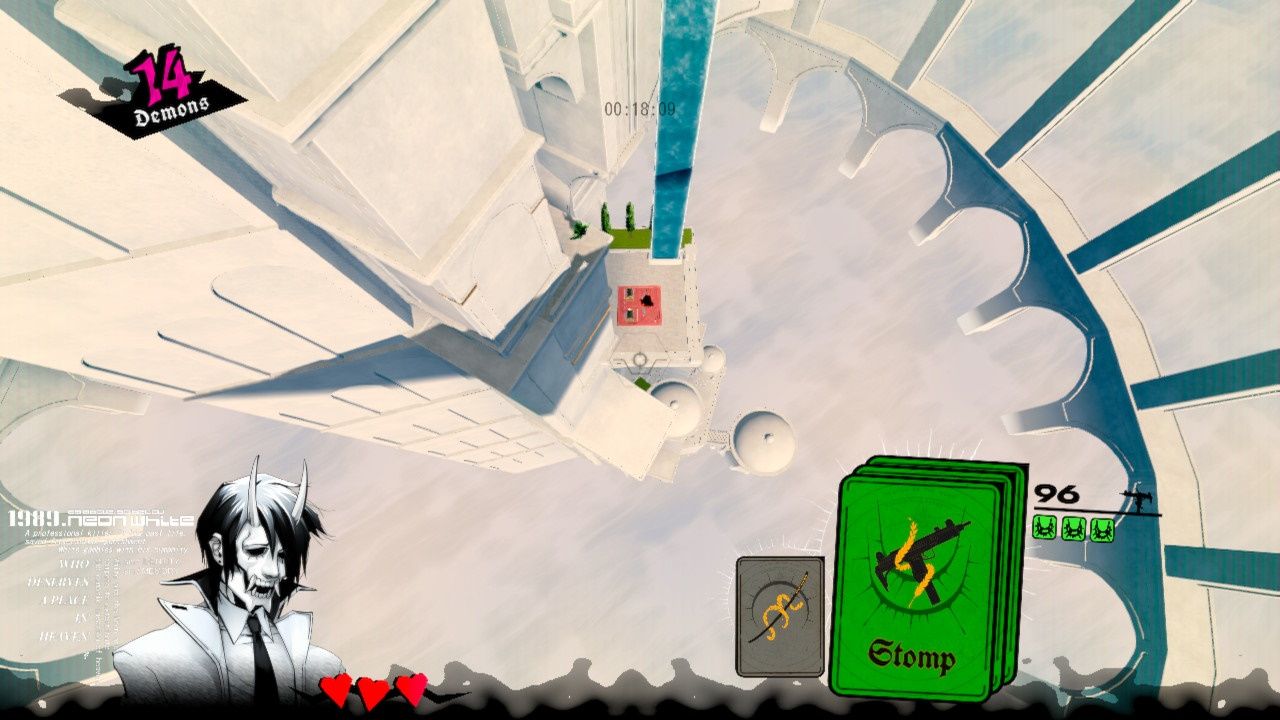 This is a fun one. In order to get the gift, you will need three SMGs. This does mean you will need to take out three of the green demons (without using discard abilities). 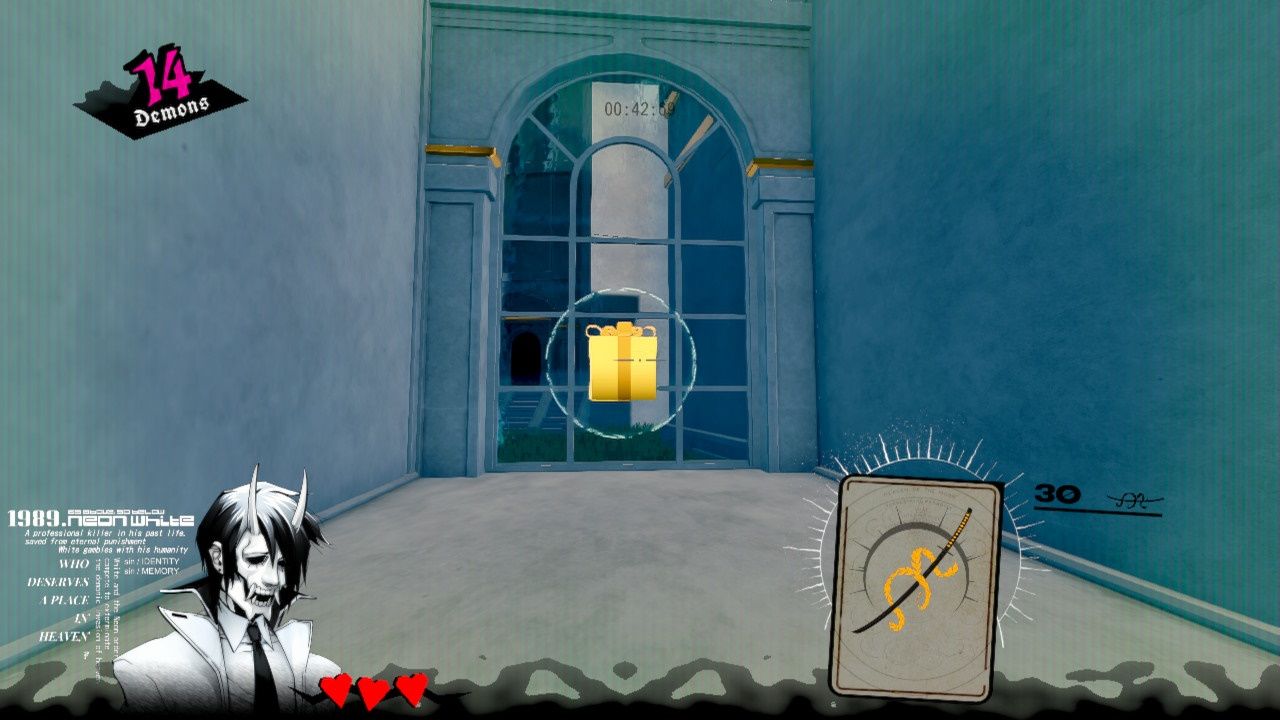 After that, just jump down to the right side. Keep falling until you see a roof jutting out (it will be next to the head demon sitting on a red trap door). Now, land on that roof and hop down and around into the room it is above. From here there is a set of three trap doors. Smash through all three, and you will claim the Six Pack. 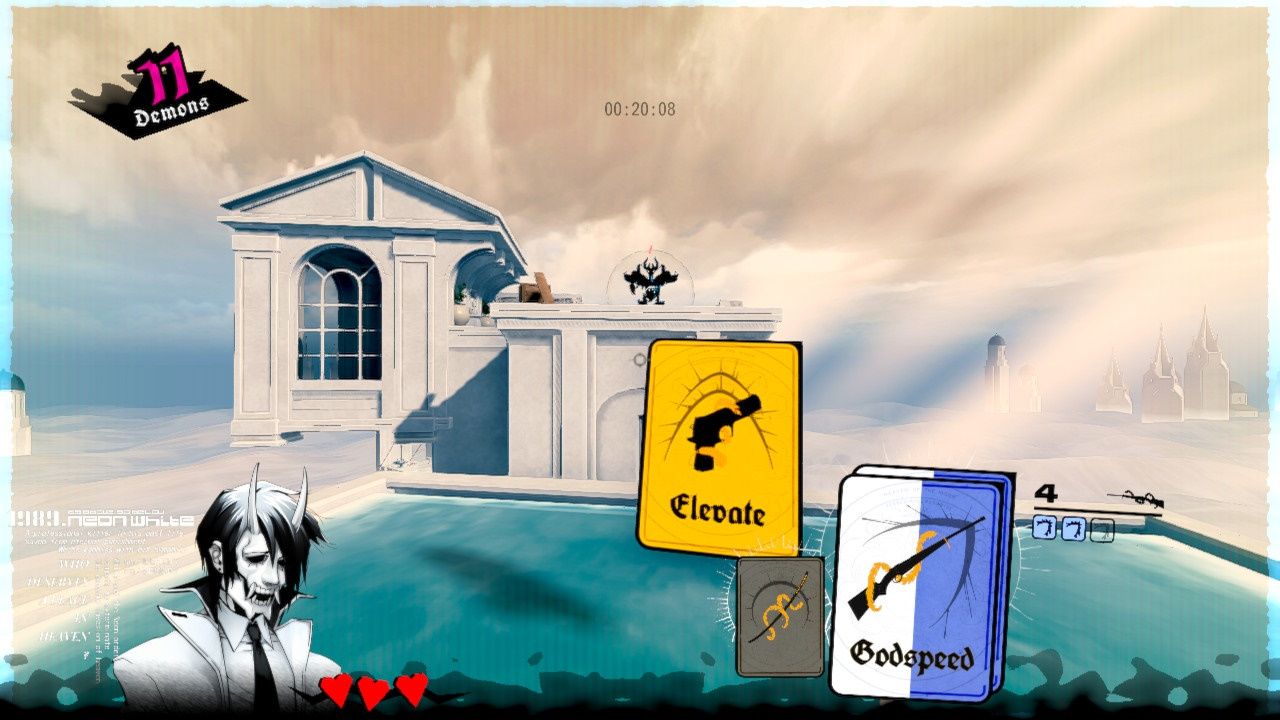 For starters, the instant you run into one of those demon head things, you are going to want to stop and shoot. Don't burst through them. There is a yellow demon behind them, and you need that double jump. So, once you take them out, collect the pistol, and then jump and dash to the next platform. Once again, don't use the double jump! You will see a building on the next platform. 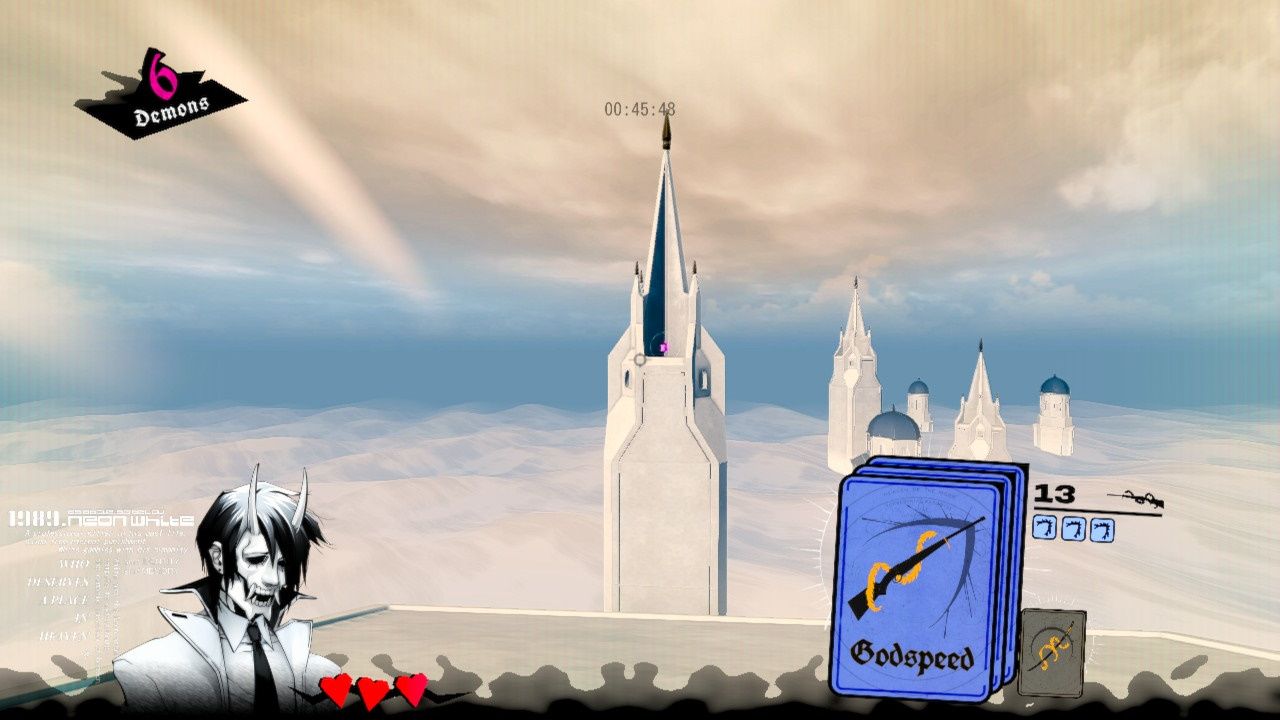 There is also a stretch of blue demons here. Take them out by shooting so that you can have three sniper rifles. Now, head to where you see the wood plank ramp. Run up it and jump on top of the building using the pistol's discard ability. You will see the present in the distance. Just dash to it with your sniper rifle discards. You will now be able to claim the Tattletail Toy.