Neon White's sixth mission is something of an escalation. These are some of the most deviously difficult platforming sections in the game. But it isn't just the platforming that is super tricky about these levels: it is also the gift placement. One of this mission's favorite tricks is to place the present in view from the starting position, only to have you go on a wild goose chase in order to obtain said present. That's right, they're taunting us now.

A big part of what makes these stages so tricky are the new demon types: the tripwire demon and the landmine demon. The tripwire don't play a huge role in your present hunting endeavors, but the landmine demons operate as a dynamic launching pad, which means they will absolutely play a role in acquiring some of these tucked-away treasures. But worry not, we are more than happy to guide you through these trials and tribulations. 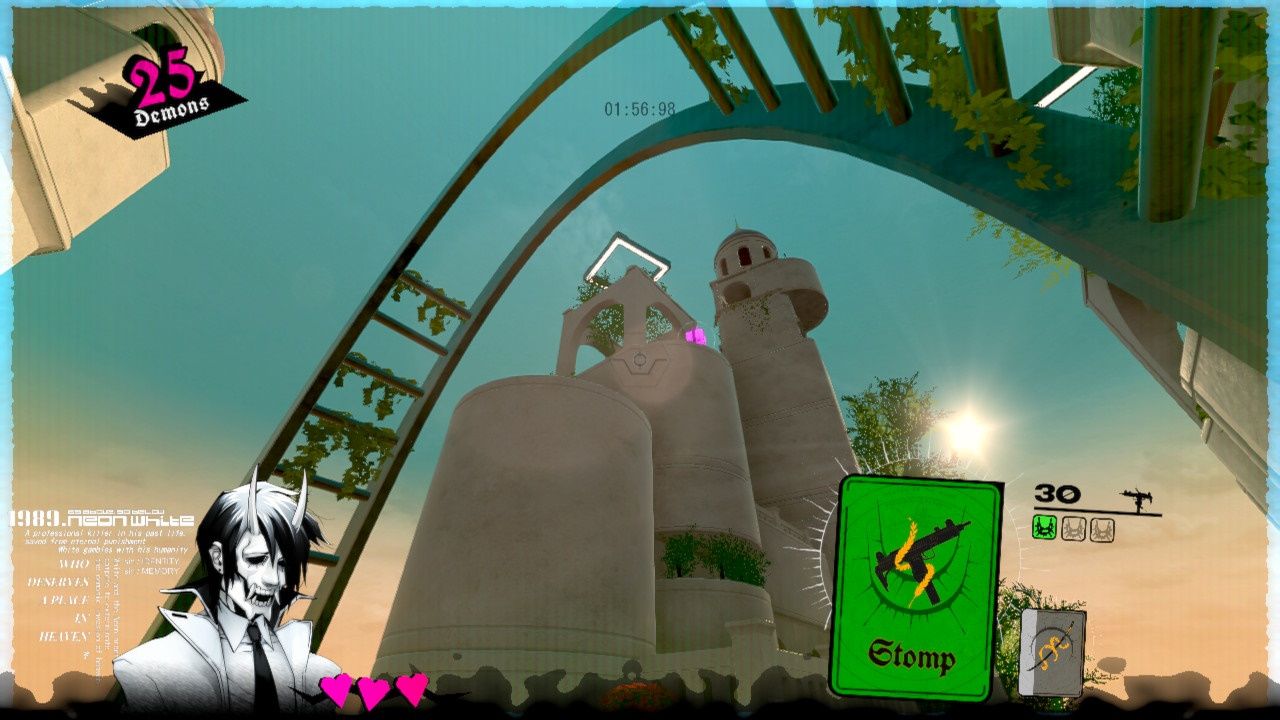 Continue the stage as you normally would. However, once you reach the segment with the two Assault Rifles: stop. Grab both assault rifles and turn around. If you look up, you should see the gift. There are two smaller structures that lead directly to it. Just use the assault rifle's discard ability to bomb jump your way up to the top of those structures. Voila, you are now the proud owner of a Tattletail Toy. 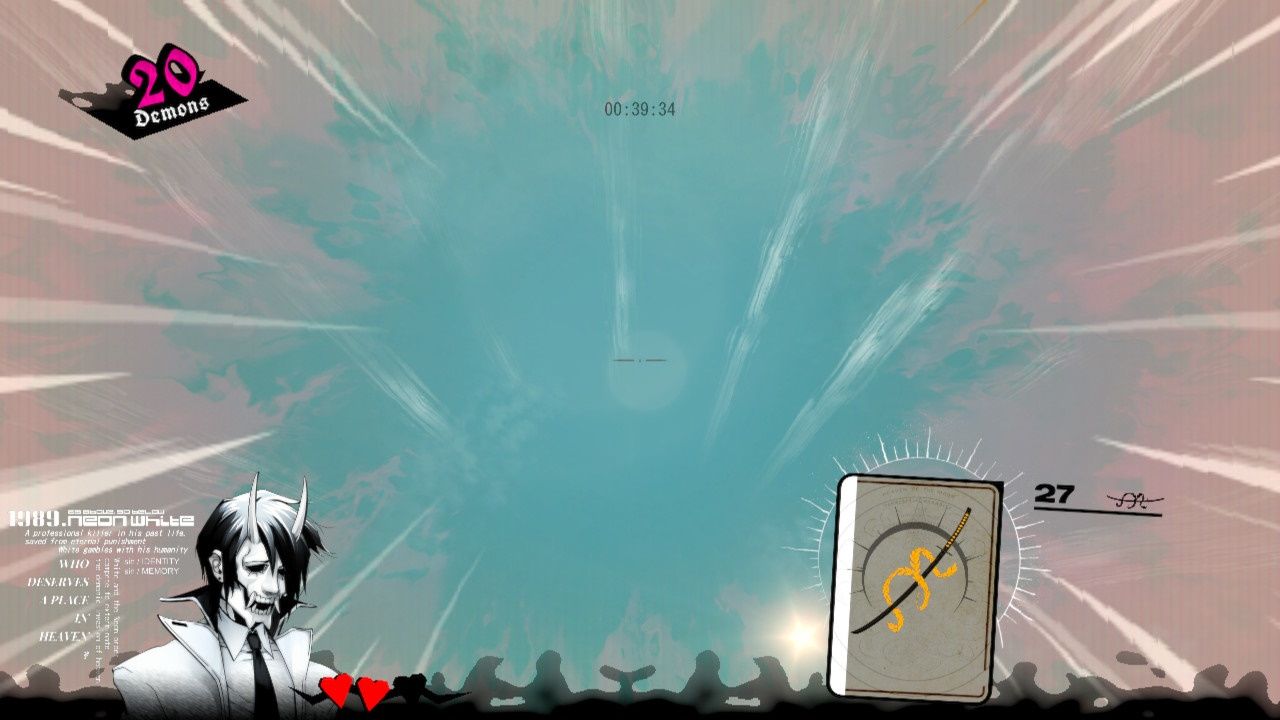 This gift is sitting on top of the structure at the very end of the stage. In order to get to it, you will need to have two shotguns. So, begin the stage as you normally would. Continue until you reach your first red door. Then stop! Don't blow through that door; save the shotgun and jump out the window to the left of it. Now, take out the enemies huddled around the treasure chest below. Open that chest and you should have two shotguns. 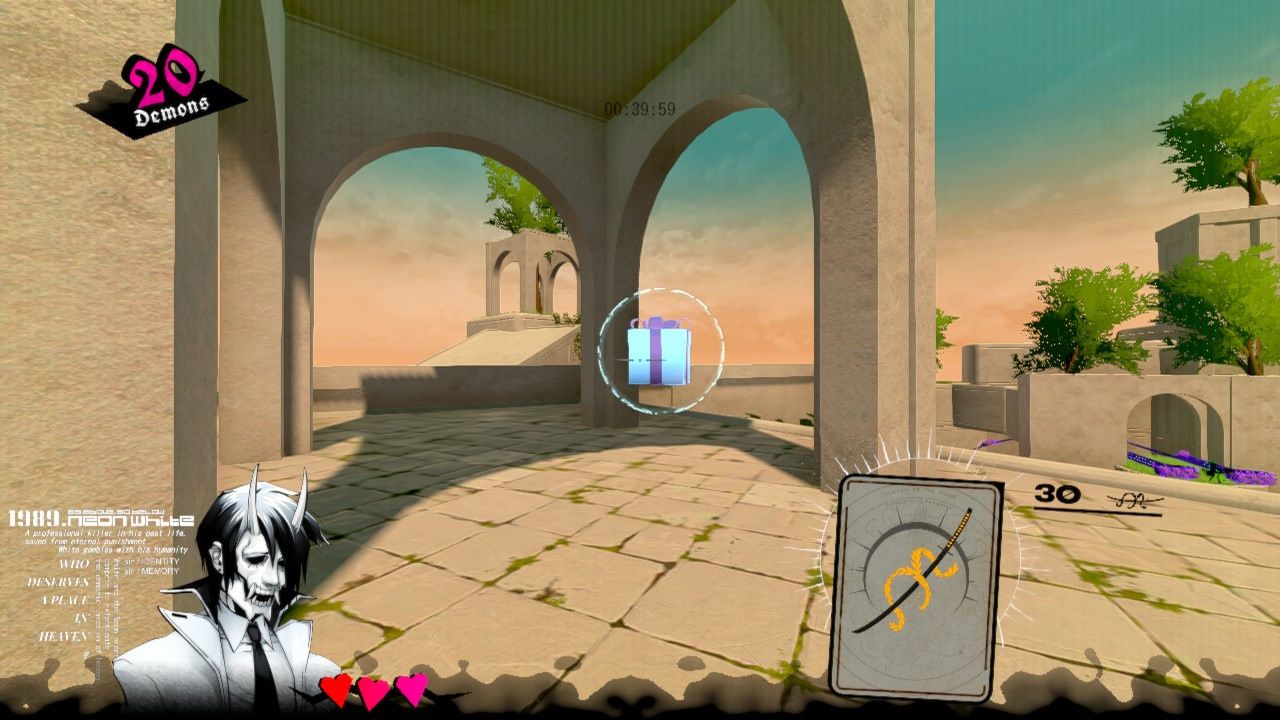 From here, dash from balloon demon to balloon demon while taking out the tripwire demons. Once you make it to the landing at the top (where there is another shotgun), jump back into the section where you just were and use the shotgun discards to fire yourself high up into the air. You will land on top of this giant structure and be able to grab the Lucky Cat Statue. Phew! 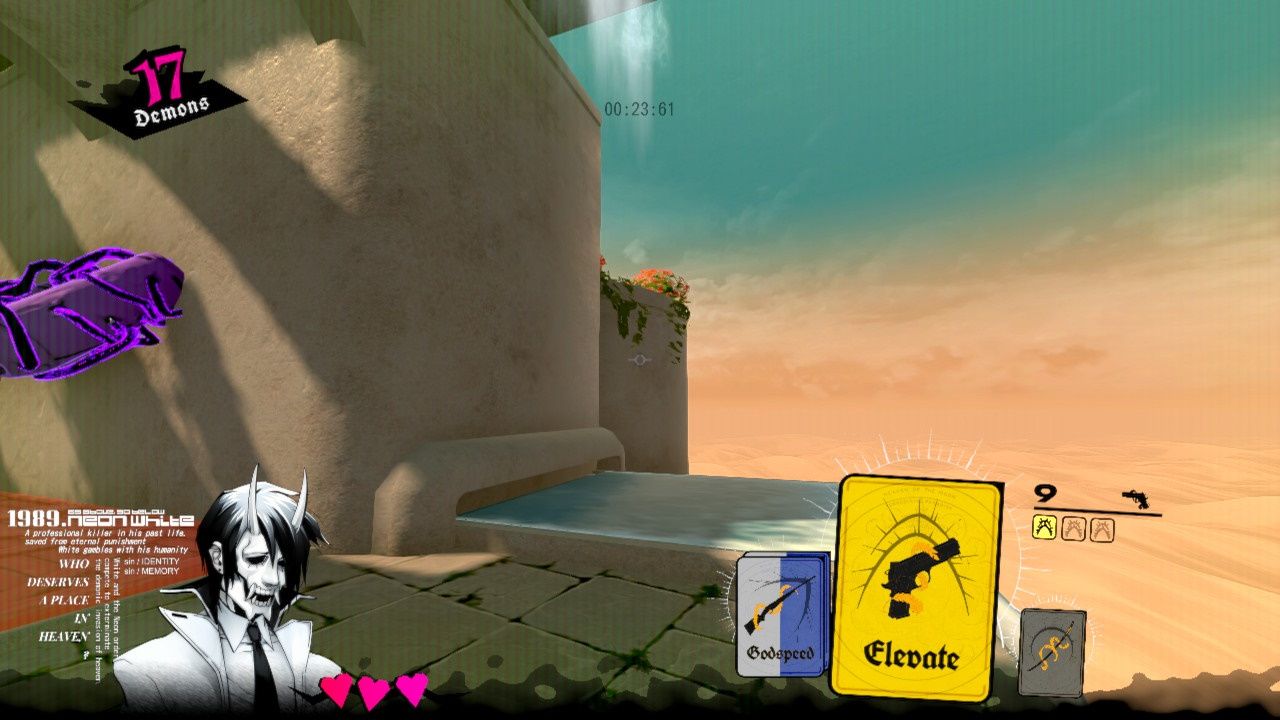 This is a tricky, tricky gift. It is actually above you when you start the level. However, it is just out of reach. So, what you need to do is conserve your sniper rifles. That means not using those discard abilities. Don't worry about taking out all the tripwire demons, just shoot the one that is aiming at the red door at the beginning so that you can pass through. 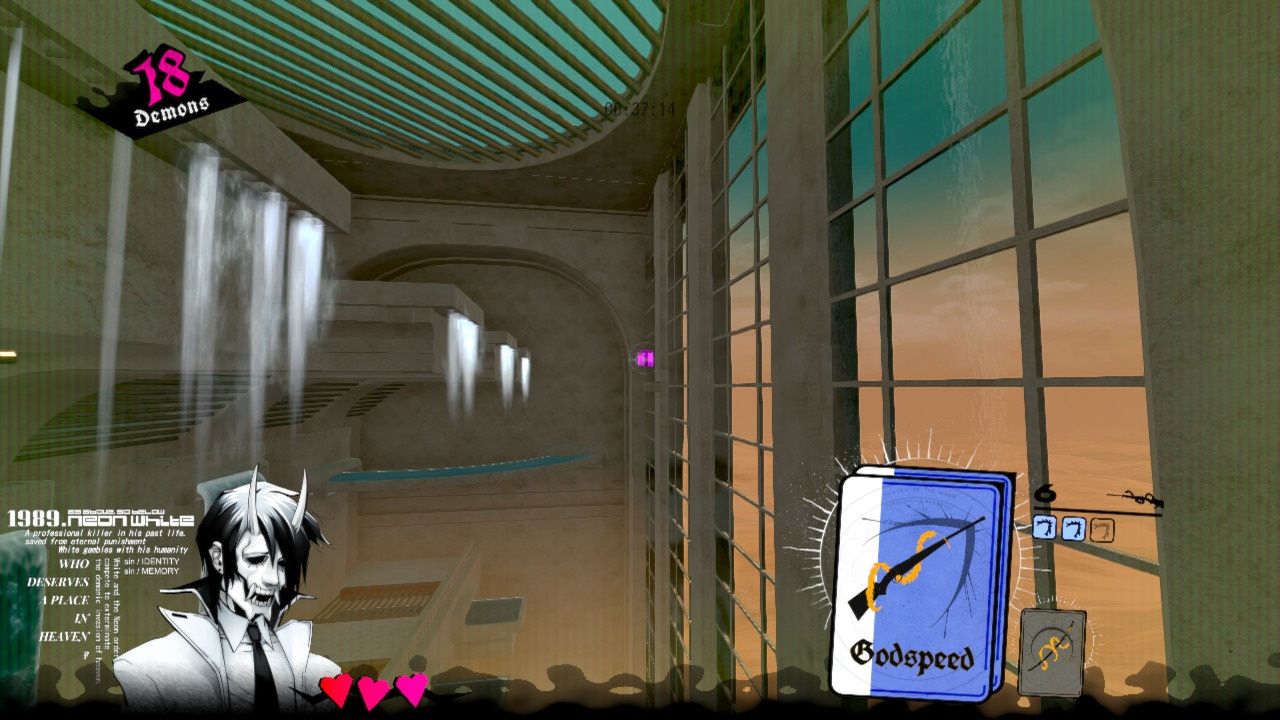 At the spot where you get the handgun, look to your left. Now, hop up here using the handgun's double jump ability. You will now be on a whole other floor. Head to the right side of this section and climb up the objects. At this point, you should be able to see the gift floating in the distance. By discarding both of your sniper rifles, you will be able to boost right to it. You will grab another one of those coveted Tattletail Toys. 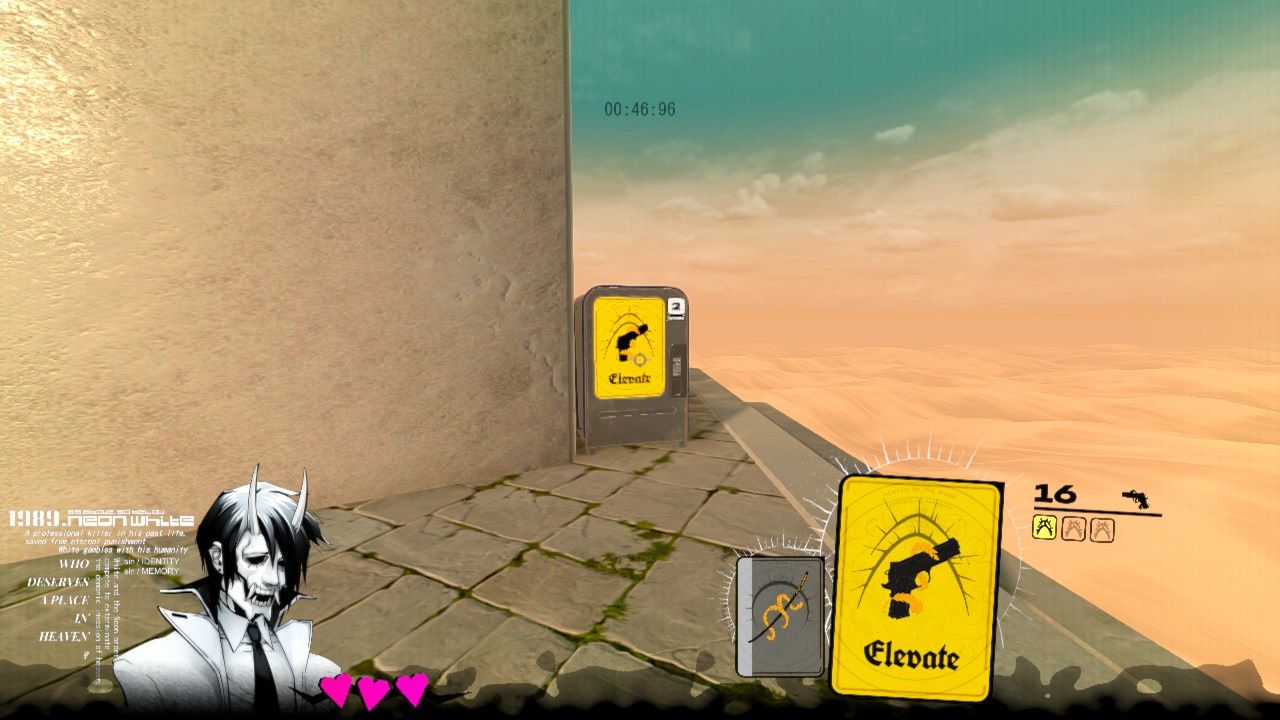 In order to get this gift you will need to complete the entire stage. Once you have cleared out all the enemies in the final section, look for a vending machine. It will have two handguns. Grab both of them. You should now have three handguns in total. 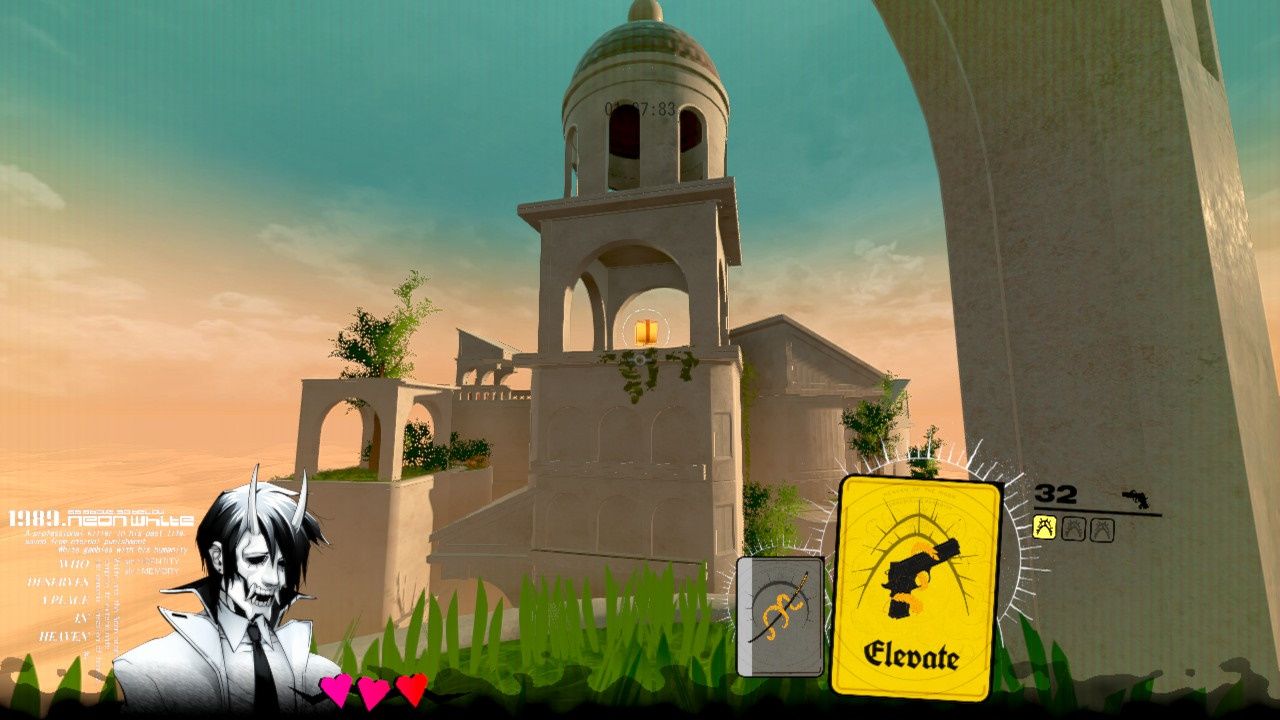 Turn around and head back to where you came from. Just discard each handgun to make the gap across each time, aiming for the highest platform you can reach on the right, and you will very quickly be in the line of sight of the present. Use your final handgun discard to hop on over to it. You will grab the Cigars. 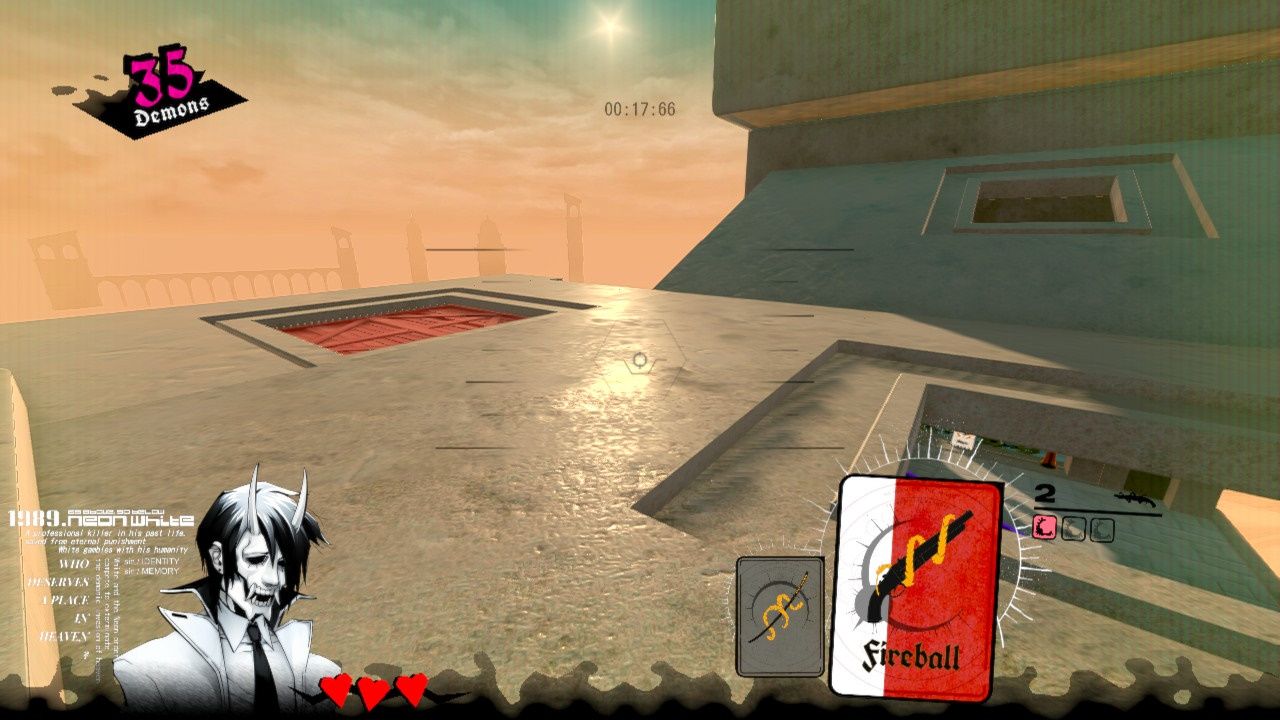 At the beginning of the stage, grab the shotgun and shoot the red barrel. Then, use the giant explosion to curve your way around to the back of the giant tower. We are looking for a red trapdoor in the back section. Once you find it, use the shotgun's discard ability to blast through it. Presto, you'll get the Perfume. 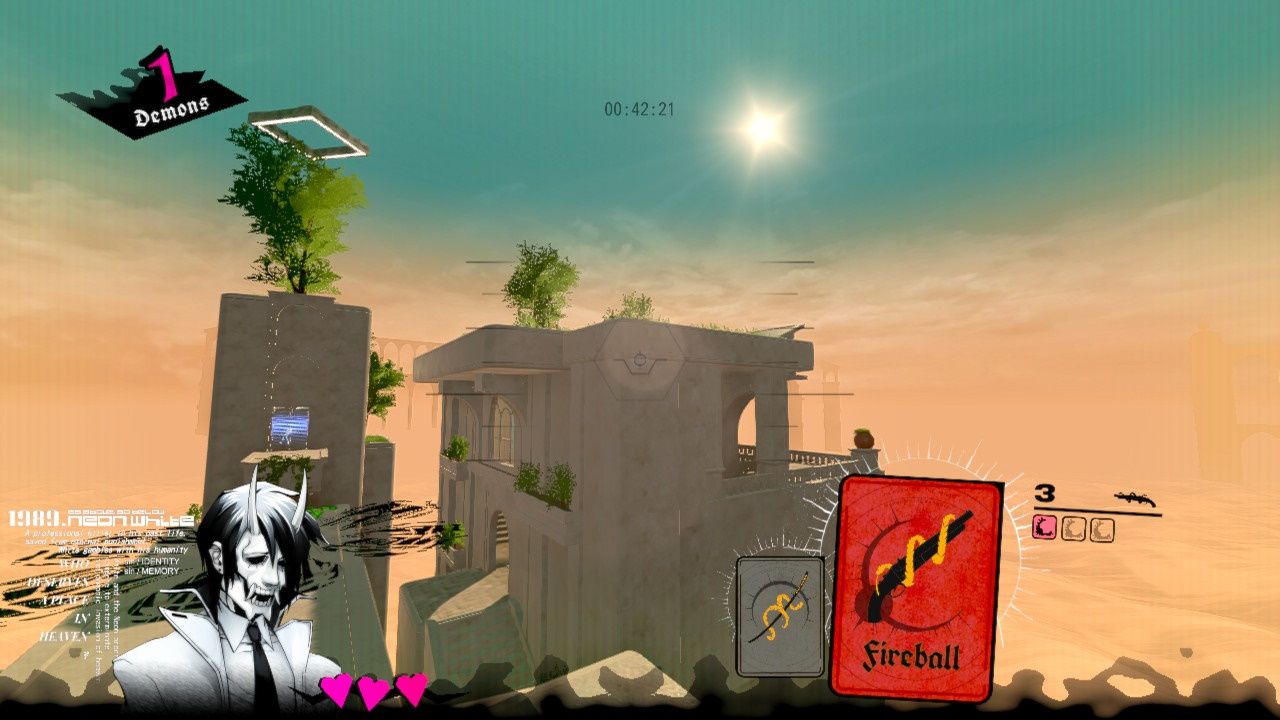 Despite this present being as clear as day at the very beginning of the stage, you will need to complete the entire level in order to get to it. Which is a little messed up. Just finish the entire stage as you normally would. However, once you are on the platform with the final landmine demon, and are facing the level exit, the area to your right is where you want to go. 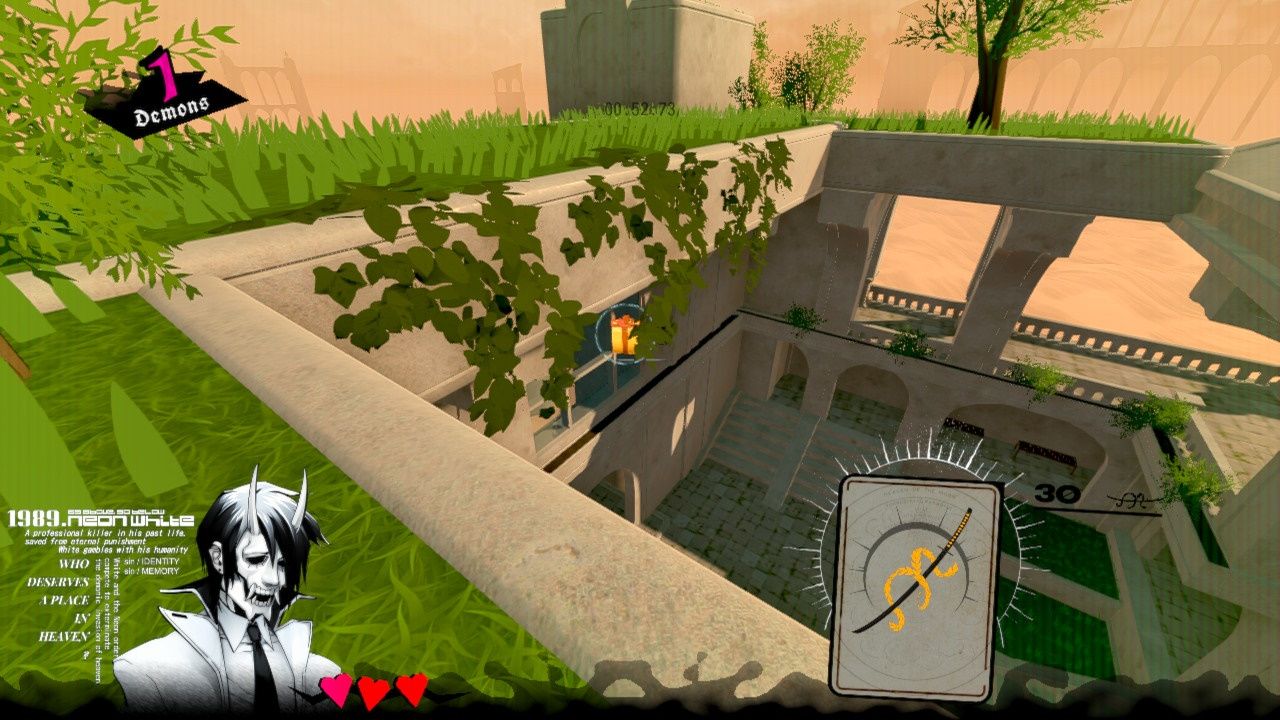 You will have a shotgun at this point. So, use its discard ability to get on the roof of the building where this level started. Now, you will be able to simply jump down and claim your present. 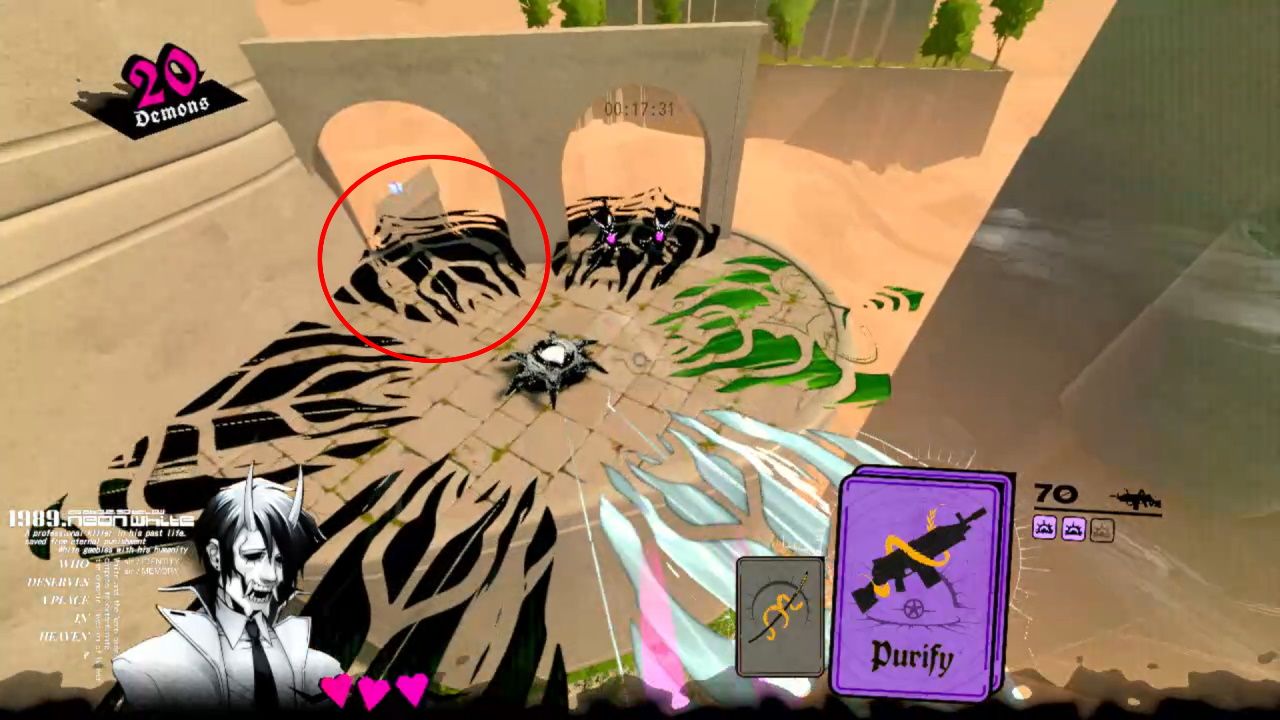 Once you obtain the two assault rifle cards, jump on the green section of the landmine that the canal leads you to. However, with the next landmine, you want to hit the section that is pointing northwest (from your perspective). Consult the above picture for a little more clarity on that one. This will send you flying toward this stage's gift. Do everything correctly and you should now have the Lucky Cat Statue in your possession. 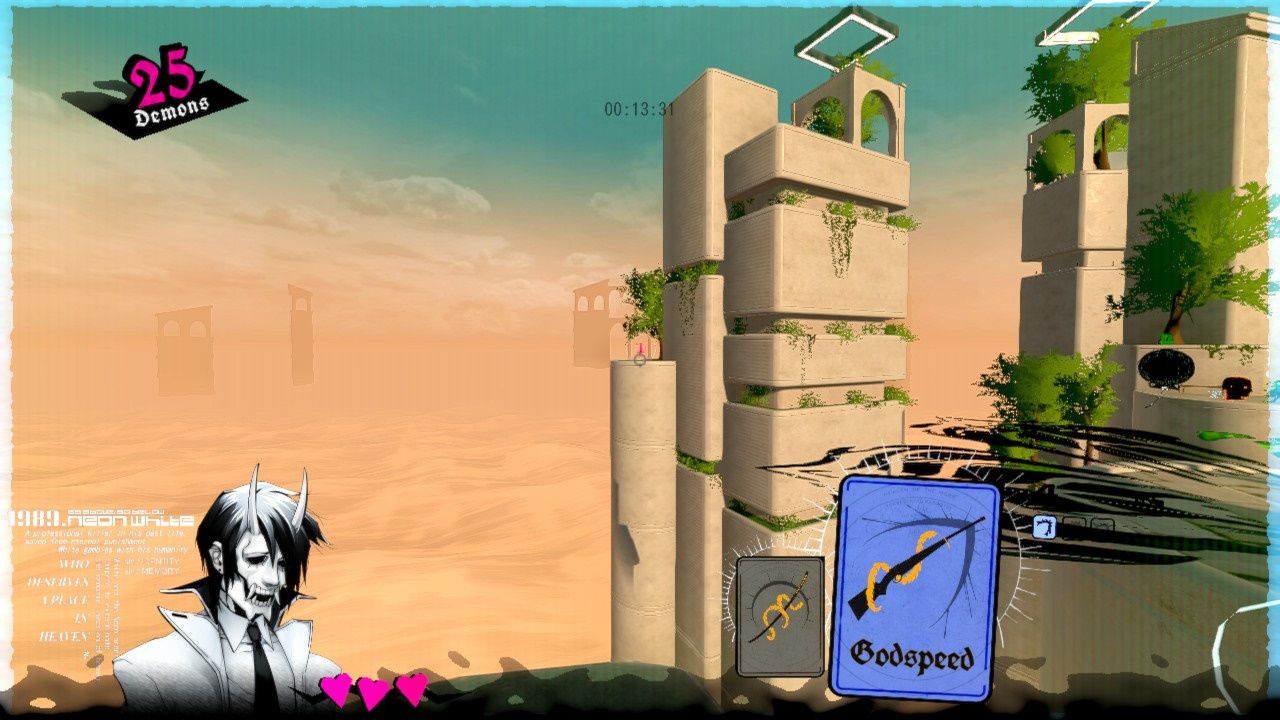 Continue this stage as you typically would. Once you have slammed down on the first blue demon, follow the canal to the end and look to your left. You will see the present in the distance. Now, jump on the section of the landmine demon that is pointing at the present to let it propel you toward your prize, then use the discard ability of the sniper rifle to take you the rest of the way. 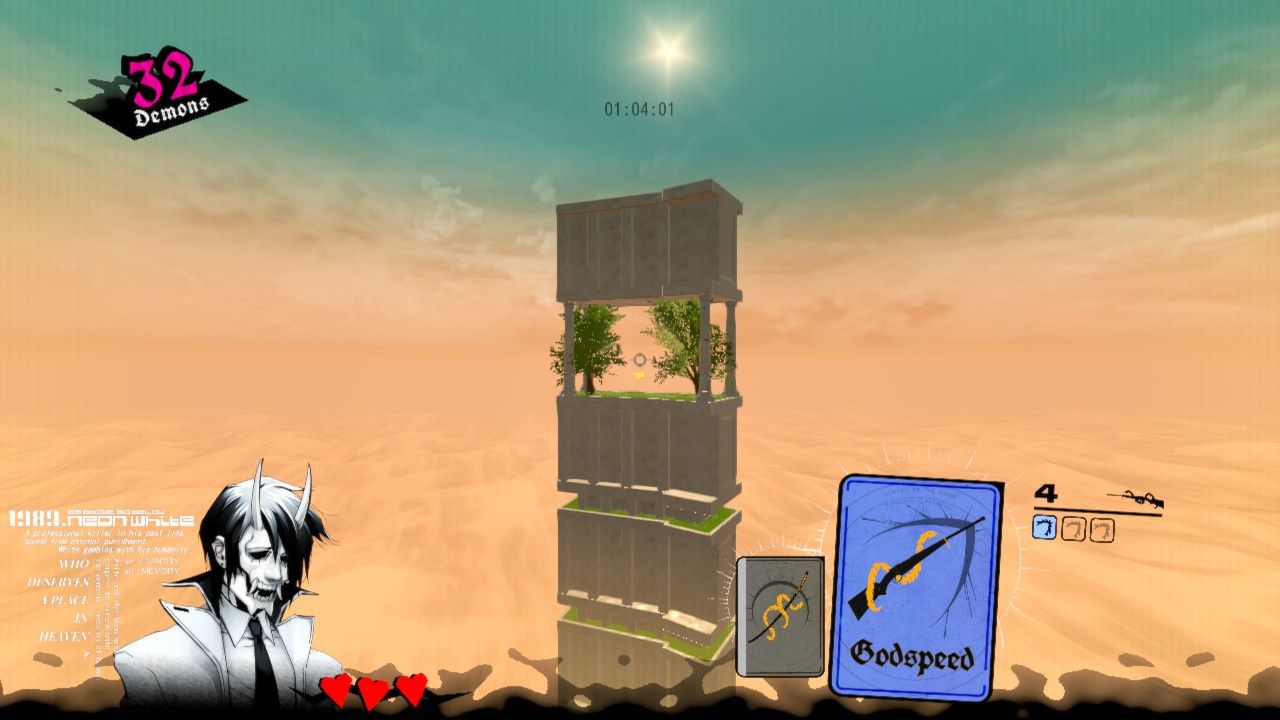 After the section near the end of the stage where you take out a blue demon, continue down the canal and take out the yellow demon. But don't progress an inch further. Instead, go back to where you killed the blue demon. 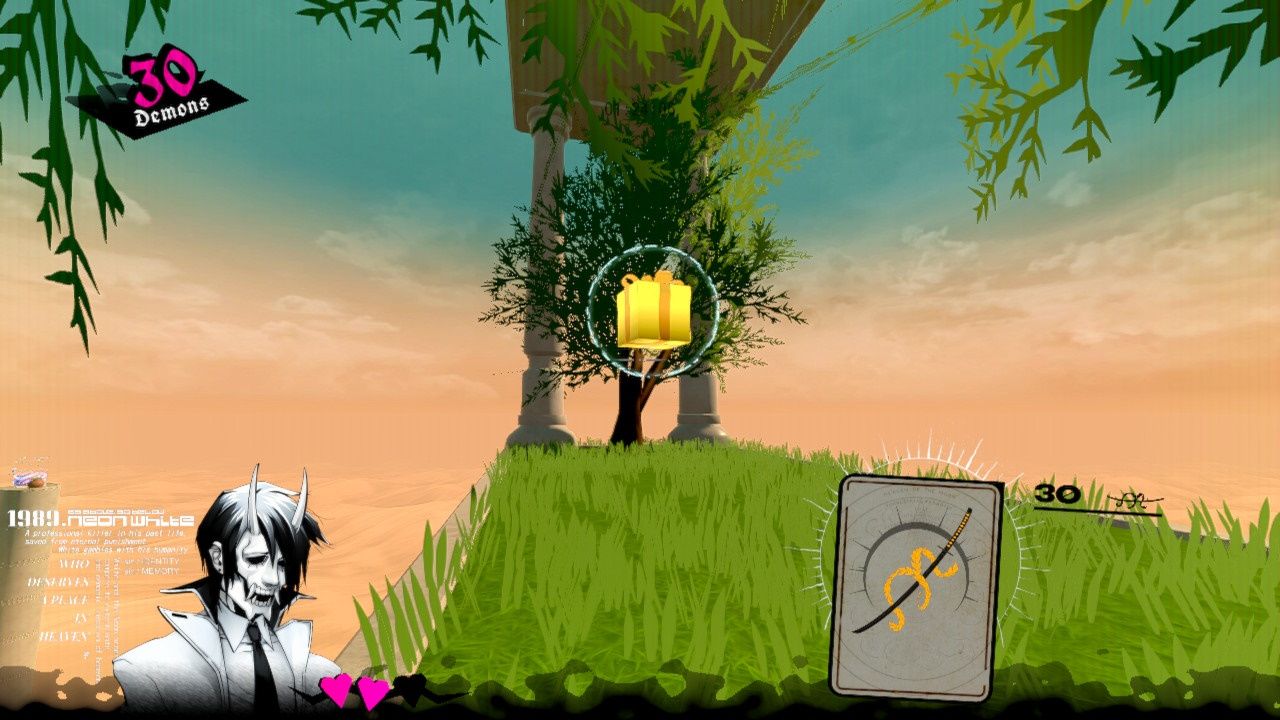 Now, if you look across the way, you will see the present in the distance. Hop up onto the nearby structure and get as close to the present as you can. From there, jump towards it and use your handgun and sniper rifle discards to cross the gap. You will now have yourself a Six Pack. 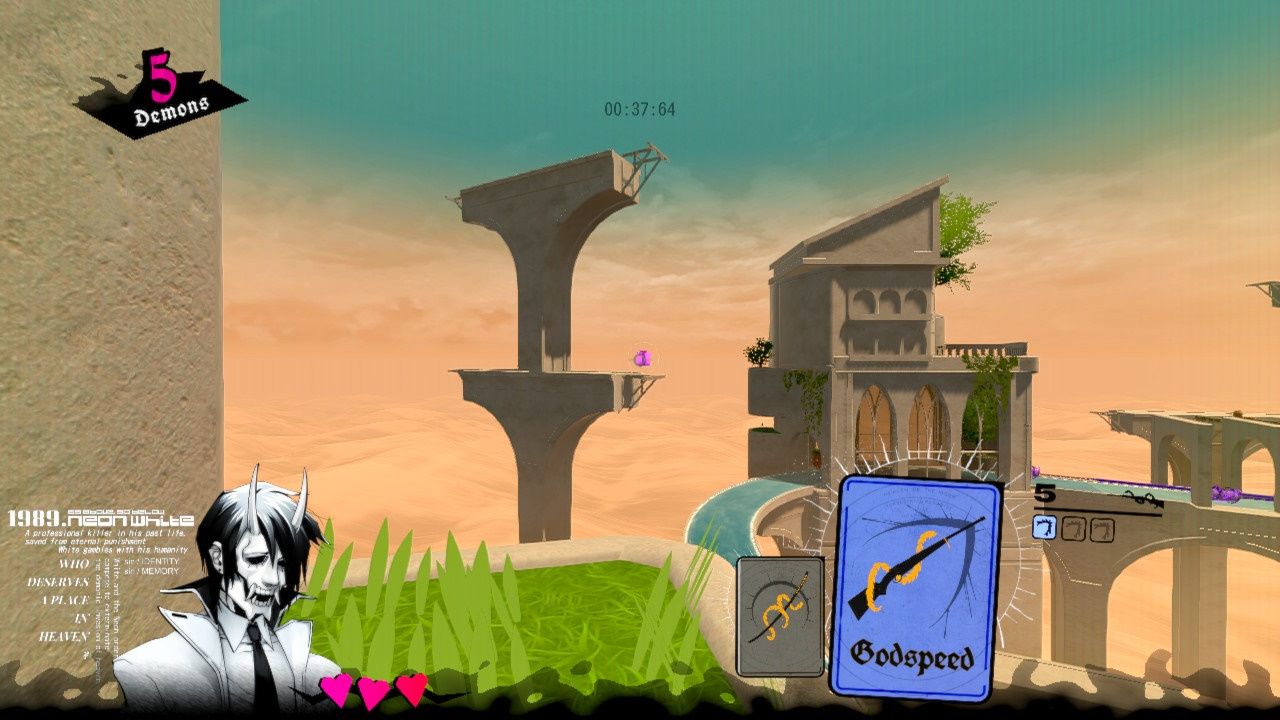 This stage is a pretty intense platinum medal to achieve, but the gift is a total breeze. This present is hovering above and to the left of the destructible door around halfway through the stage. All you need to do is get on its level. 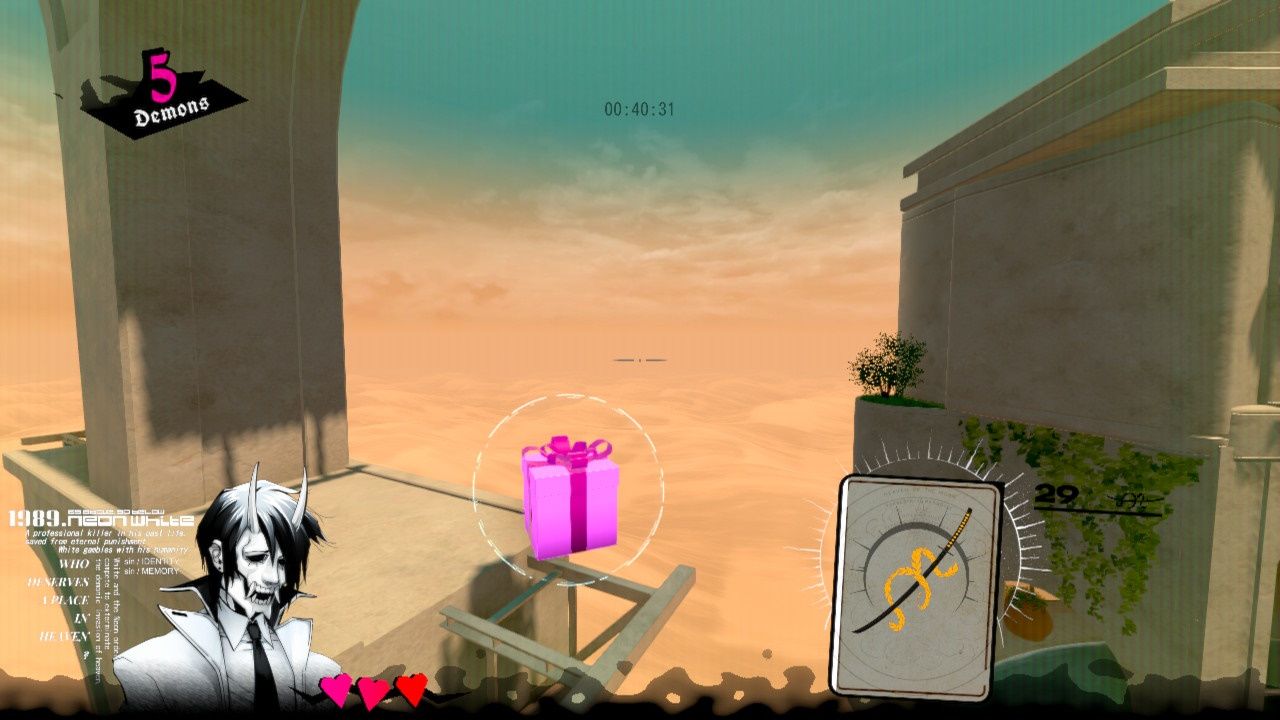 So, backtrack until you find a platform low enough that you can jump on it. Then make your way toward the prize. Once you have made it as close as you can to the present, just jump across the gap and use the sniper rifle's discard ability to dash into it. This Tattletale toy is extremely easy to obtain.