Neon White's tenth mission consists of only two levels. So, there isn't much to it, right? You, my friend, are dead wrong. While the first stage is, more or less, your standard fare (though it contains no enemies), the second level is another showdown with Neon Green. And let us tell you right now: it isn't a brief encounter. Far from it! In your battle with Neon Green, nearly every single tool you have acquired in the game so far will be utilized.

You will be slamming down on crystals, blasting through them, and ziplining frequently. This encounter can be fairly intense. Though you are provided with copious amounts of healing items, you will probably find yourself having to repeat certain sections until you get the hang of them. Let us at least help you get the best time possible so that you don't have to repeat this lengthy encounter multiple times after you have been successful. 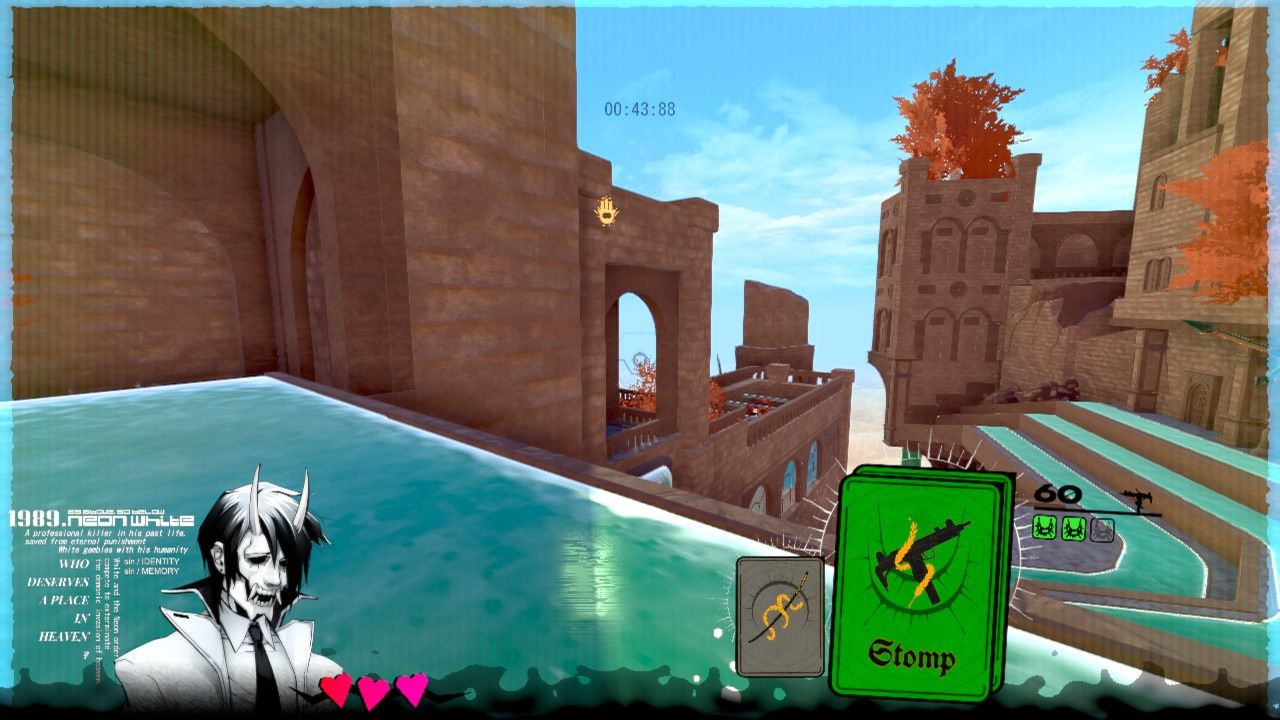 The official shortcut here (the one the hints show you) is pretty underwhelming. After the platforming section featuring the handguns, you will reach a canal with two SMGs on it. Instead of following the canal, and using the SMGs to break through a red door, this shortcut would have you jump to the left, skipping that section altogether. This will save you somewhere in the neighborhood of two seconds. So yeah, not exactly impressive. However, we found a substantially more potent shortcut that will essentially guarantee you get that platinum medal. 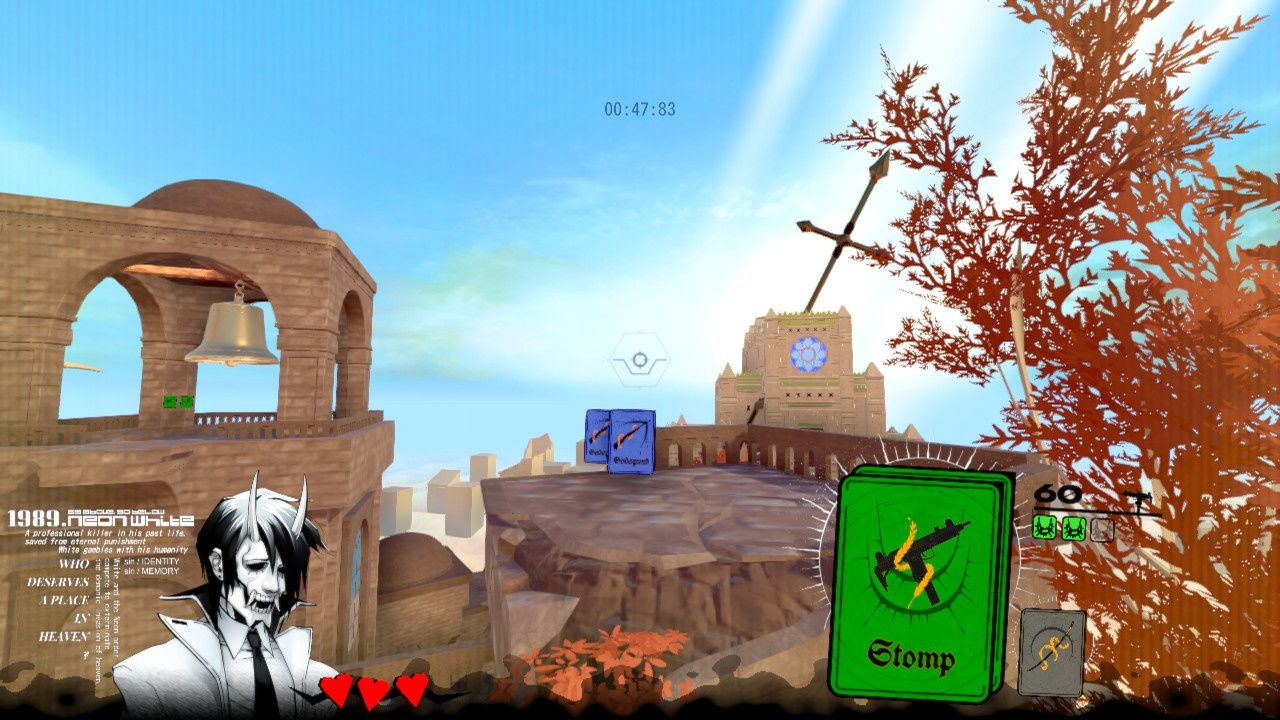 In the courtyard with the two sniper rifles (this is the section that follows this stage's official shortcut), move to the corner. You will see a giant crucifix jutting out of a church in the distance. Jump toward that church and use your two sniper rifle dashes to fly toward it 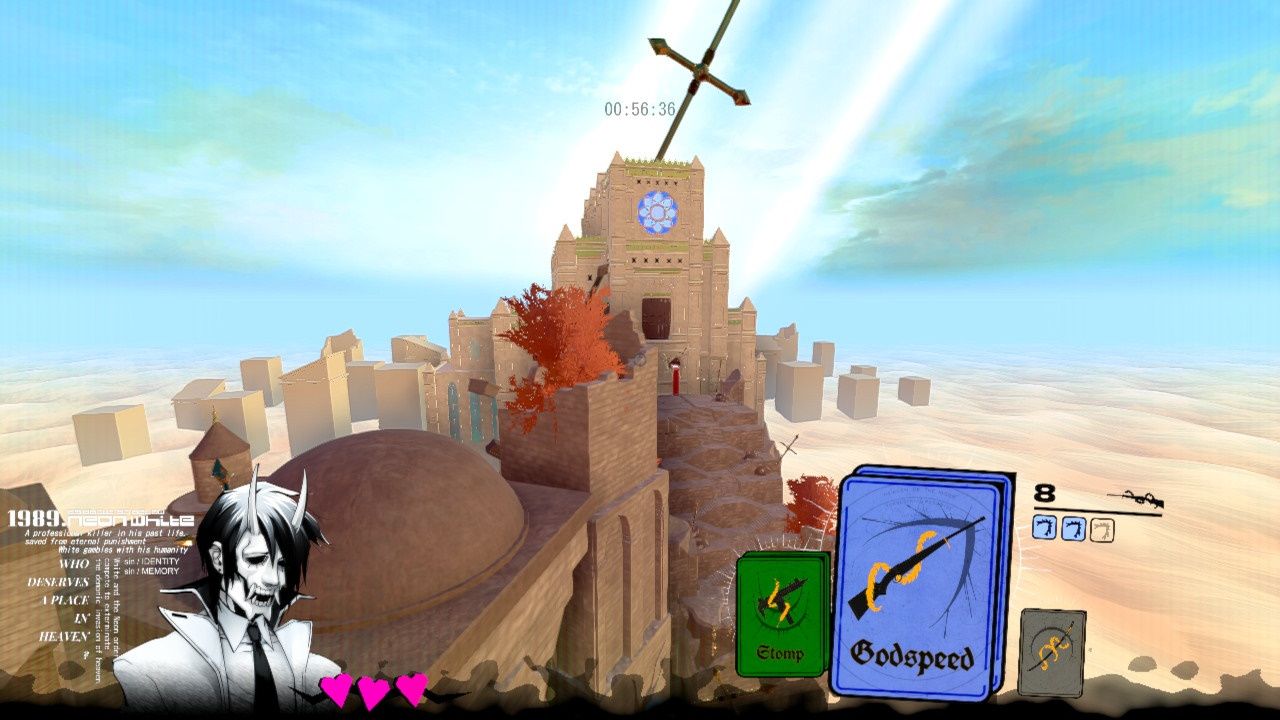 This will take you partway up the steps of the church, which is one of the final sections of this stage. This is a massive shortcut. We are talking about skipping a third of the stage here. If you use this you are all but guaranteed that platinum medal. You're welcome. 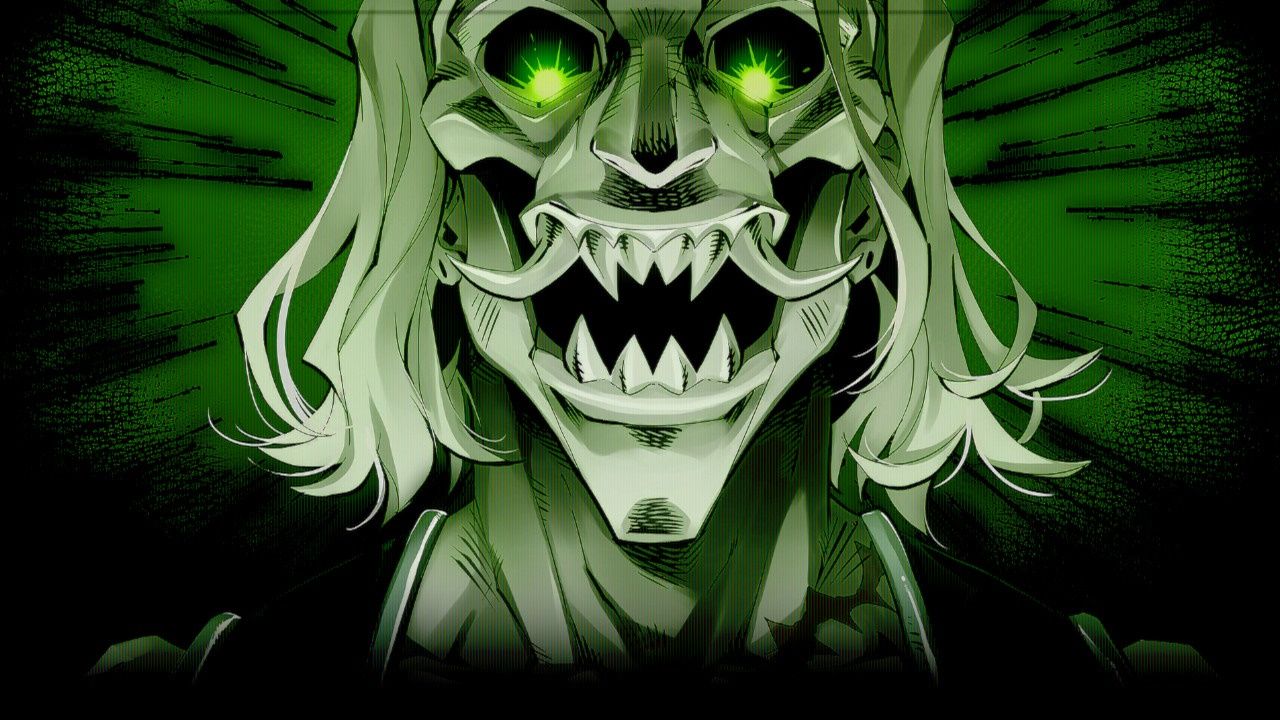 Oh no, it's Green again. And he is doing that thing where he forces us to chase him across a giant stage. Just remember, if you are doing this right, you won't be stopping unless you are shooting a dazed Green. 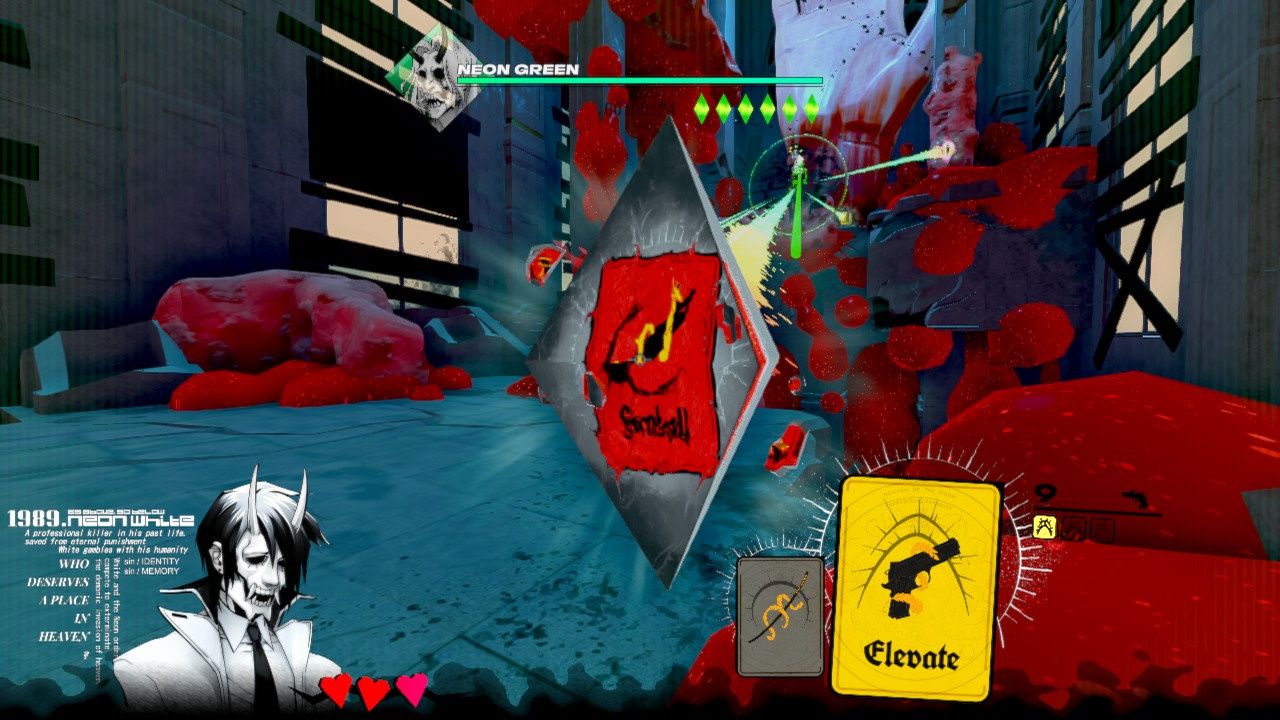 For starters, you will be taking out six crystals. Don't be afraid to use the shotgun's discard ability to blast through them. The second crystal and the fourth crystal are prime candidates for your fireball skill. Then you will need to clear a gap with the pistols double jump and hop across the two sides of the ruined second floor, taking our crystals as you go. 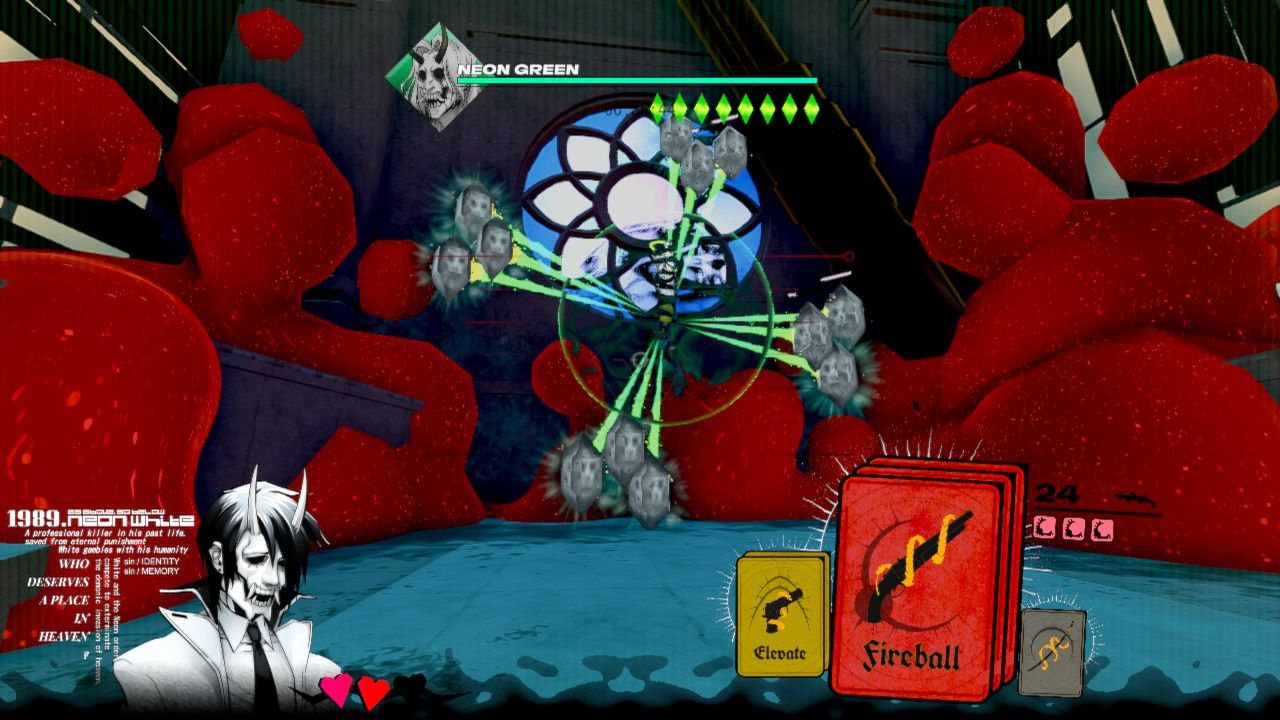 Once again, the rule here is to use your abilities frequently. The game is very good about giving you every weapon you will need. Once you have taken out all of the crystals, Green will hover for a second in front of the banister. Discard one of your shotguns to fireball through him and do a nice bit of damage. 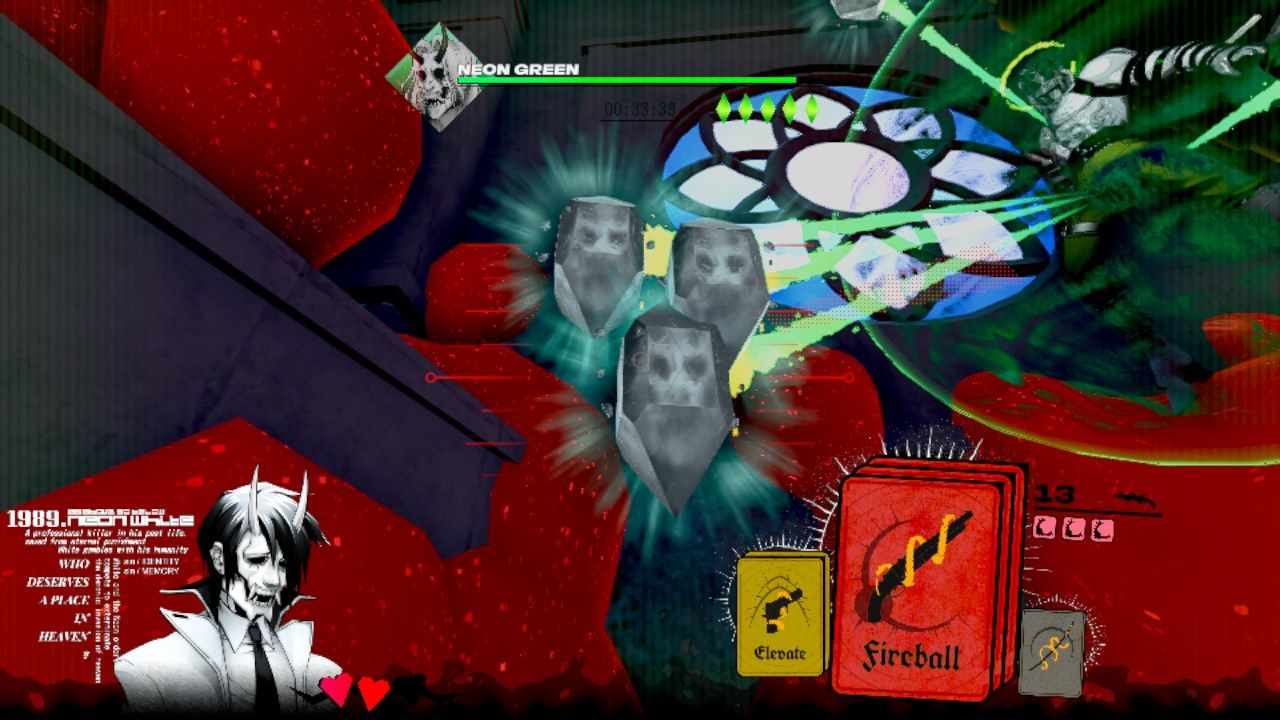 You will now corner green and have to shoot four clusters of diamonds as they rotate around him. The shotgun will very effectively lay waste to each cluster if you are close enough, so get right up in his face and strafe to one side as you take out his crystals. 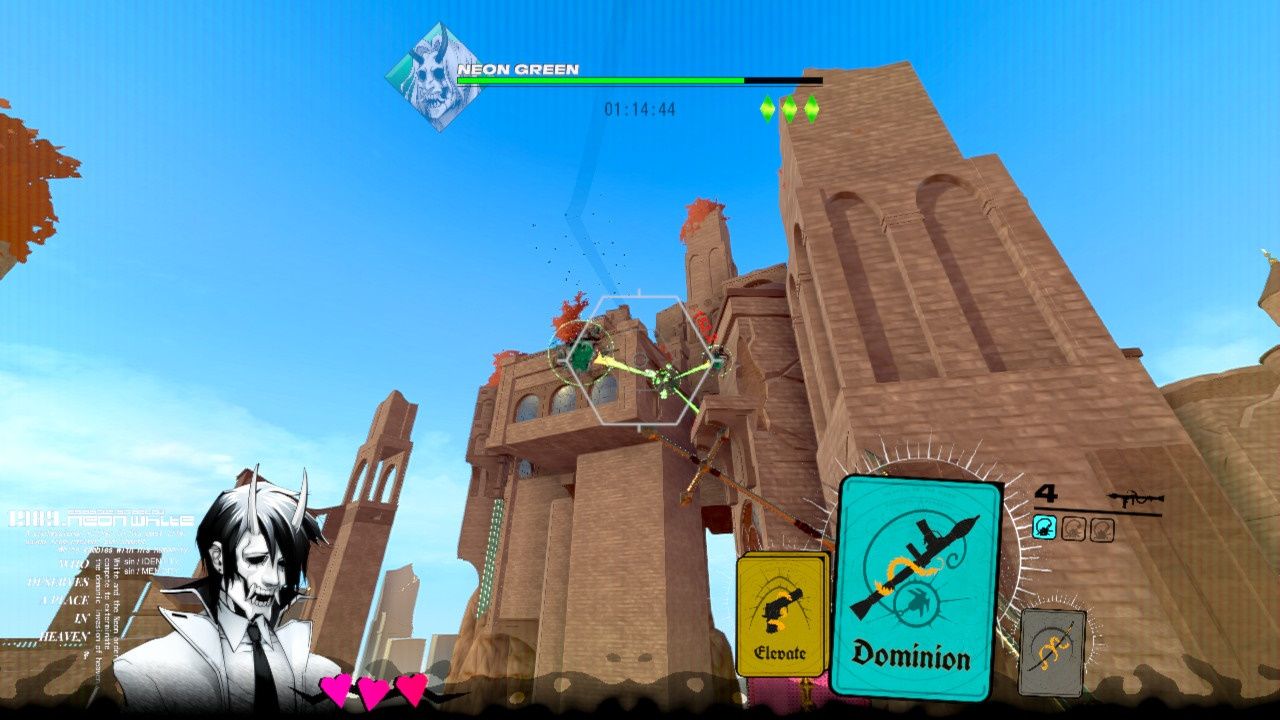 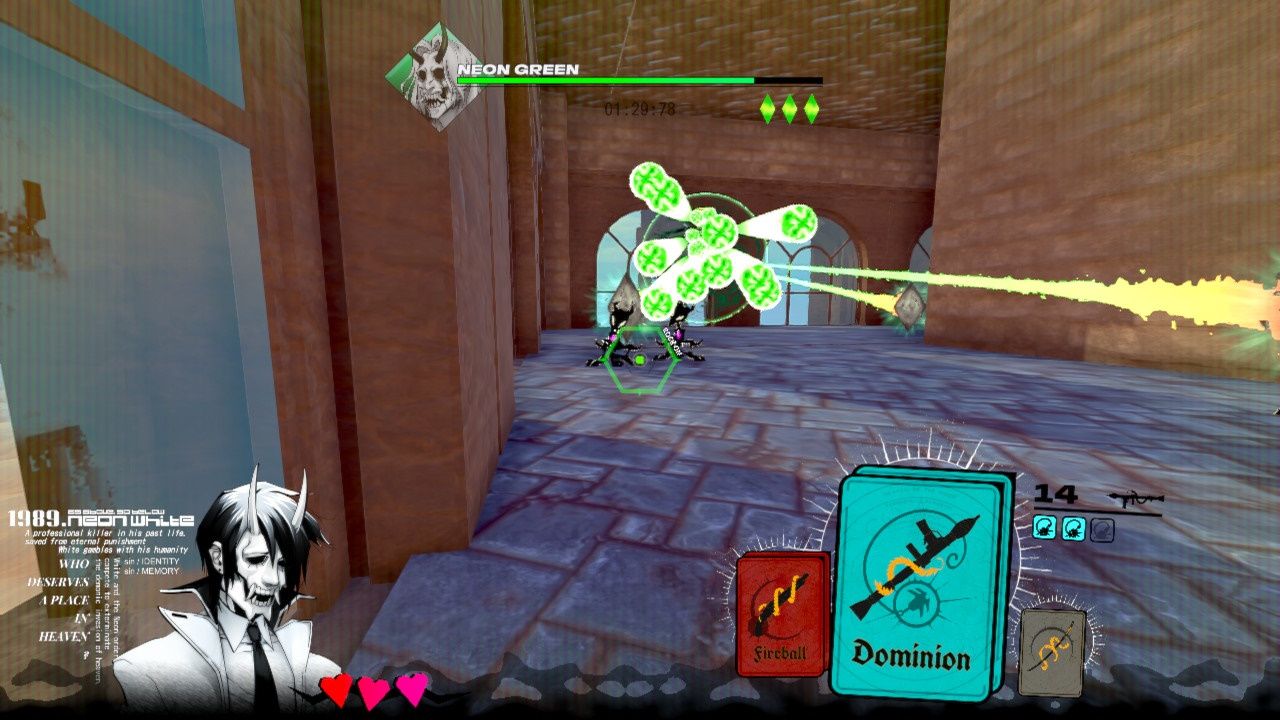 After ziplining between a few crystals, the next one will be guarded by an ammo replenishing demon. Take the crystal and the demon out with a rocket. Now chase Green into a hallway. There will be crystals to his left and his right. There is another one hidden just around the corner. Jump as you strafe while you take them out and try to avoid his attack (it can be tough in here, as it is a little tight). Turn the corner and do the same. 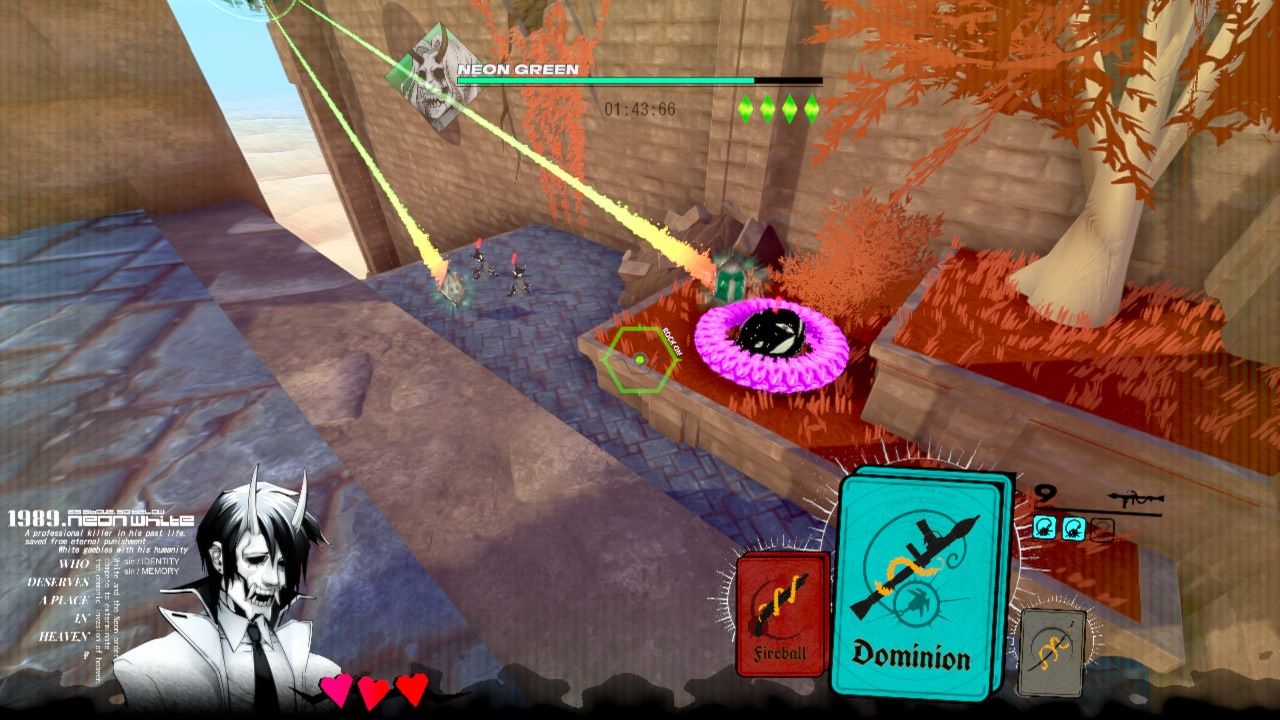 Now, jump out the window, there will be two crystals below a canal. If you are fast enough, you can perform a rocket jump to propel yourself toward the canal, take the two crystals out midjump, and drop into the canal itself. From here, just shoot the remaining crystal and rush to where it was. Green will blow through the window, and you will follow him down and zipline from crystal to crystal again. 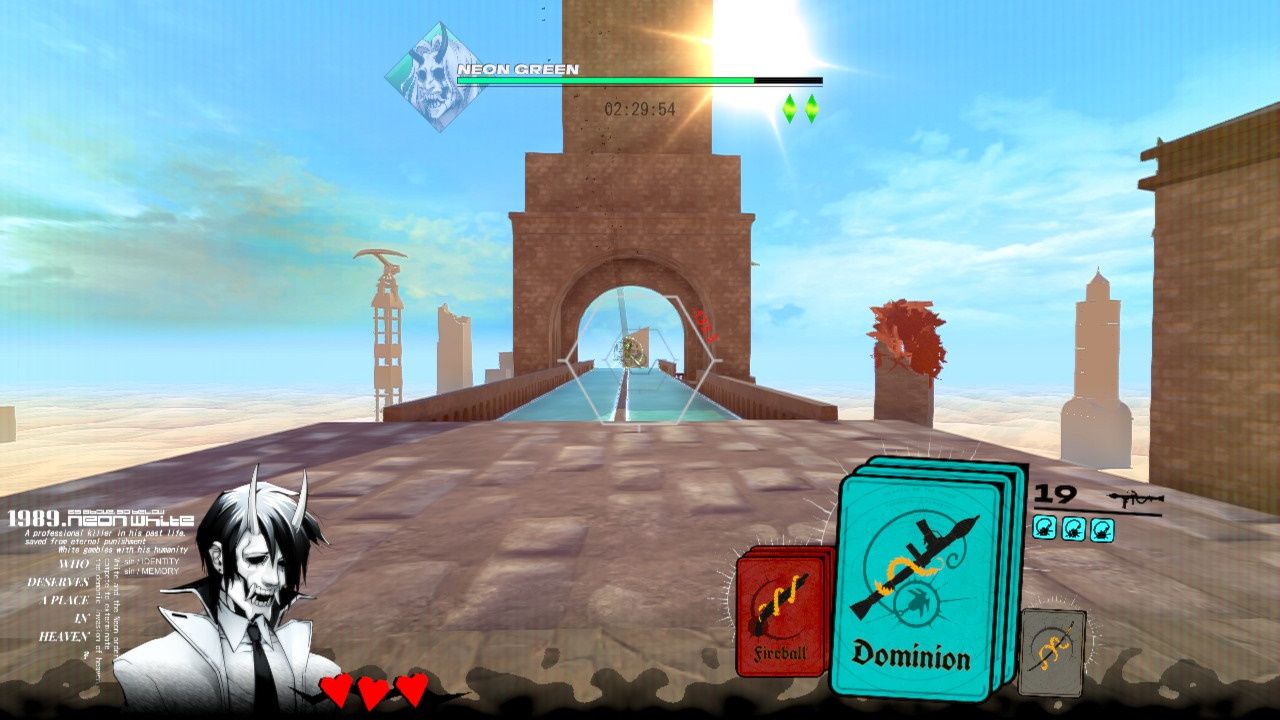 You then sling yourself into a section a series of rubble islands and broken canals. Once again, use the shotgun's fireball ability to fire yourself toward crystals when possible. You will then drop down and follow Green via a giant canal. Once you are past the canal, shoot the two demons and unload on a dizzied Green. 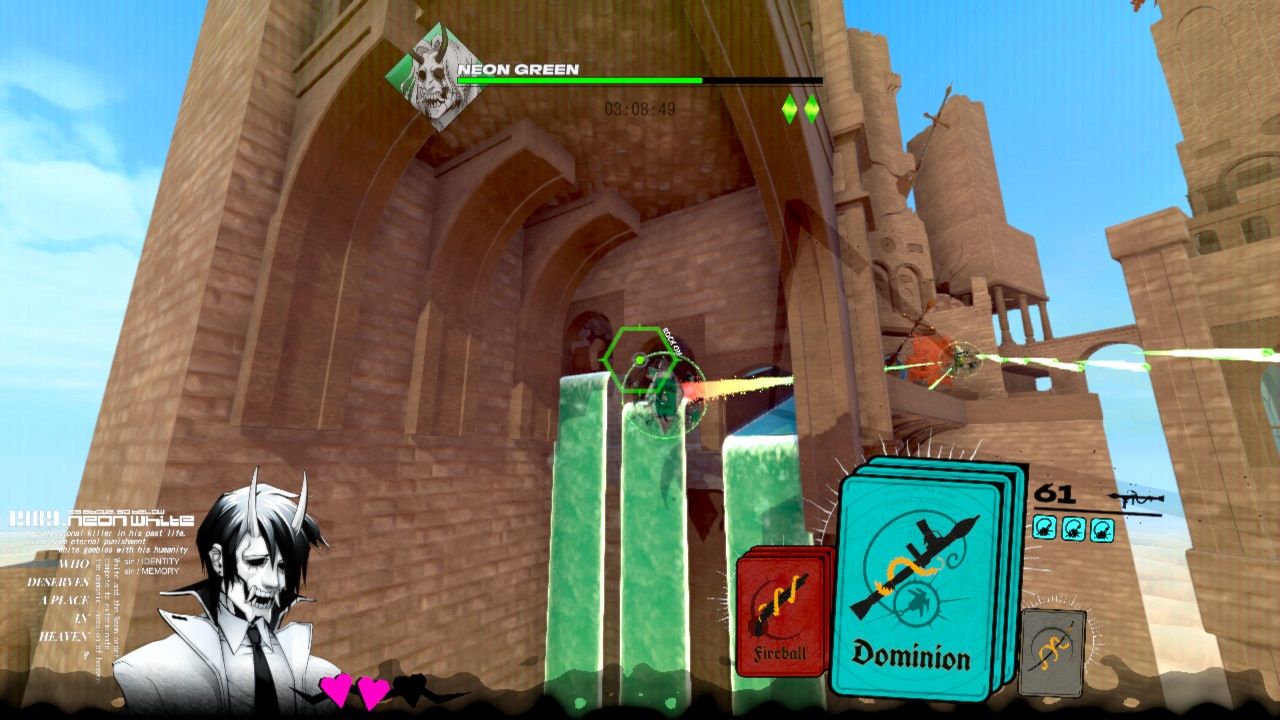 You will now engage in another zipline section, moving from crystal to crystal. You will end up in a section with three canals. The leftmost canal has a health up if you need it. The crystal you need to shoot will be at the end of the second canal. Once you blow it up, Green will retreat to the nearby courtyard. Quickly shoot three crystal positioned around him, then unload on the dizzied Green. 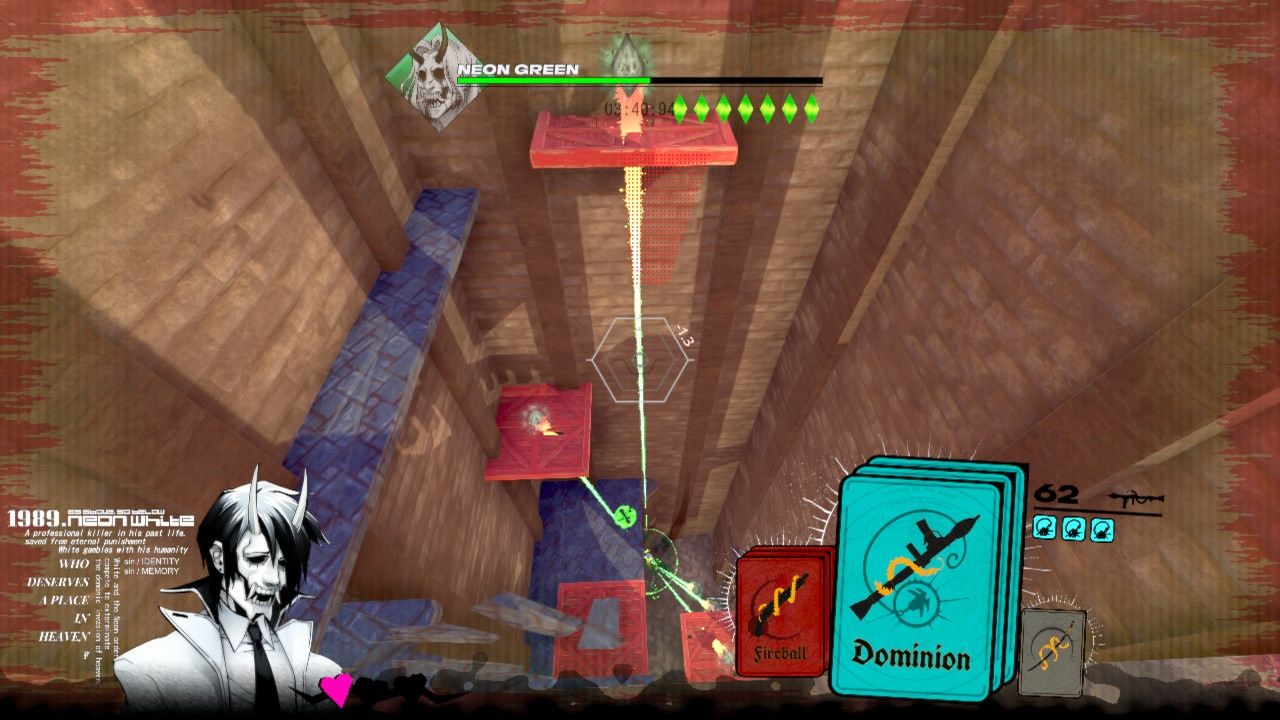 Now he will flee to the bottom floor of the nearby church. Chase him into it, blowing up his crystals from above as you descend. Now, follow him out of the church. You be on a large canal section. Hop from section to section blowing up crystals. 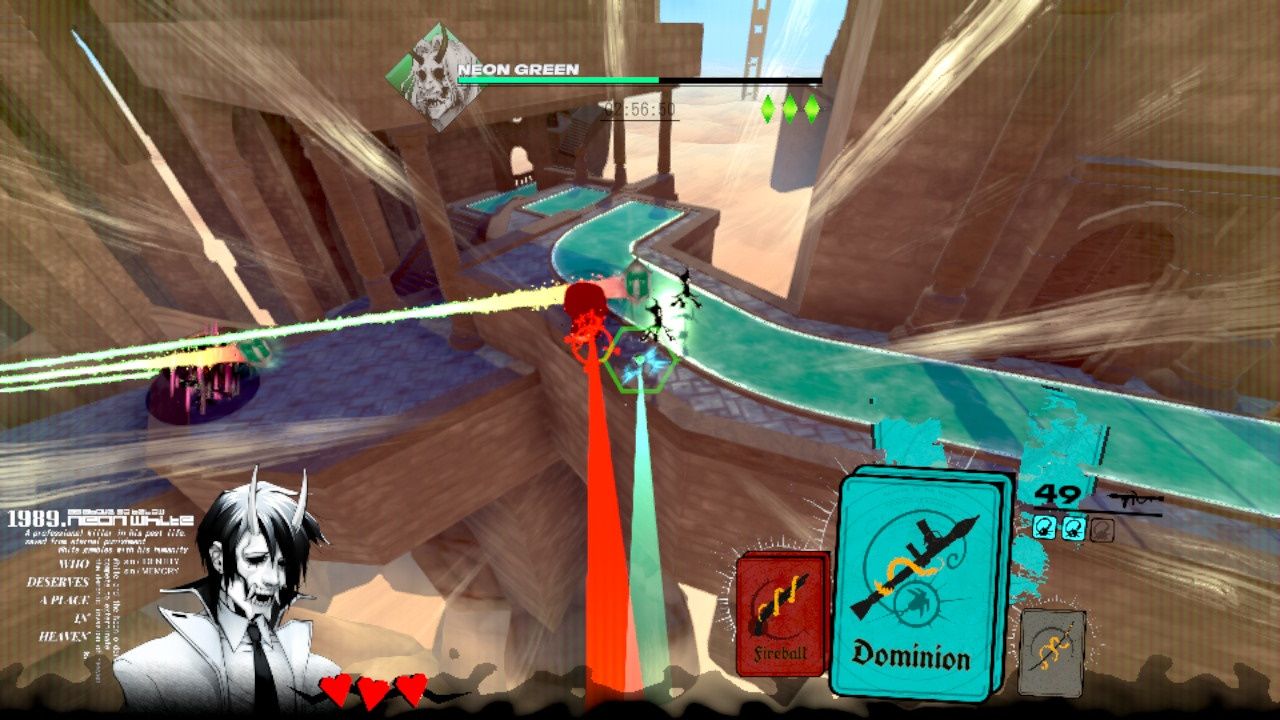 Use the zipline ability to simultaneously close the distance and also take crystals out. Once you catch up to Green he will once again be dizzied: blast him with your rockets. 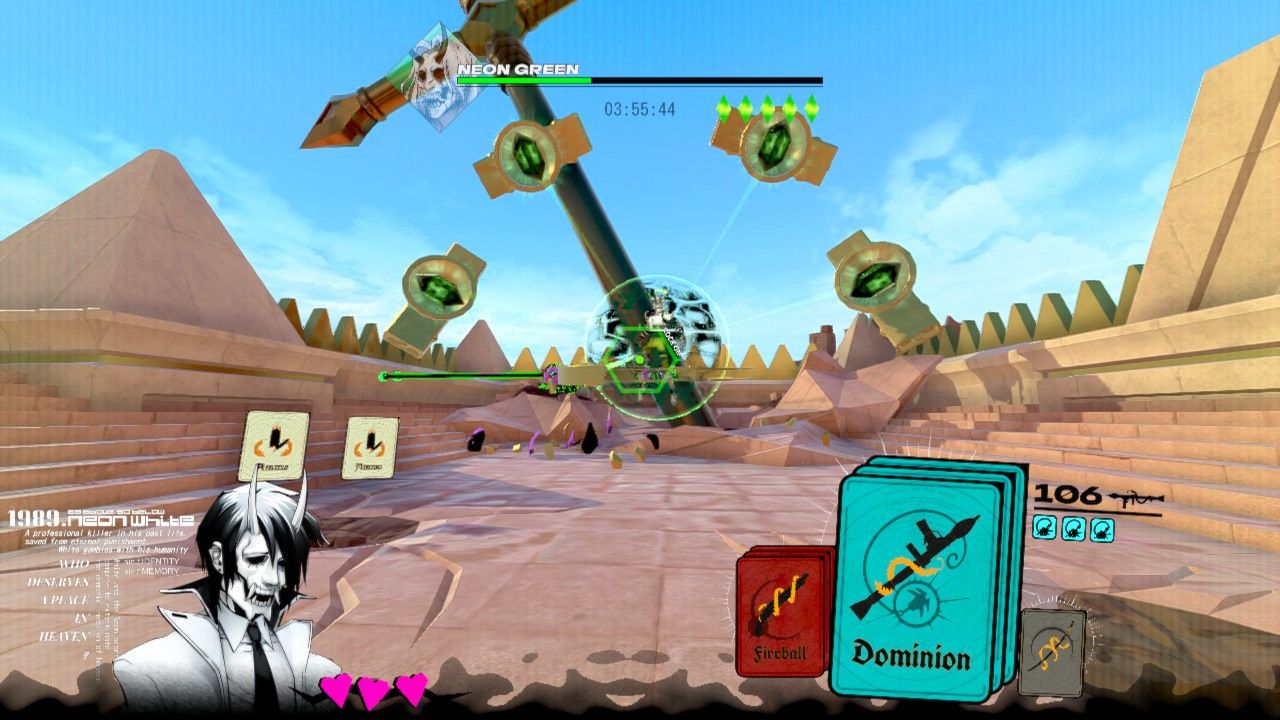 This section will be followed by, yet another, zipline segment. This time you will follow Green to the top of the building. Here he will have lasers that you either need to hop over or shoot. Honestly, you are better off just unloading into that central ring as the laser comes around (you need to destroy the crystals anyway). Make sure to take out the four crystals hovering behind him as well. Once you destroy all eight crystals, shoot the dizzied Green. 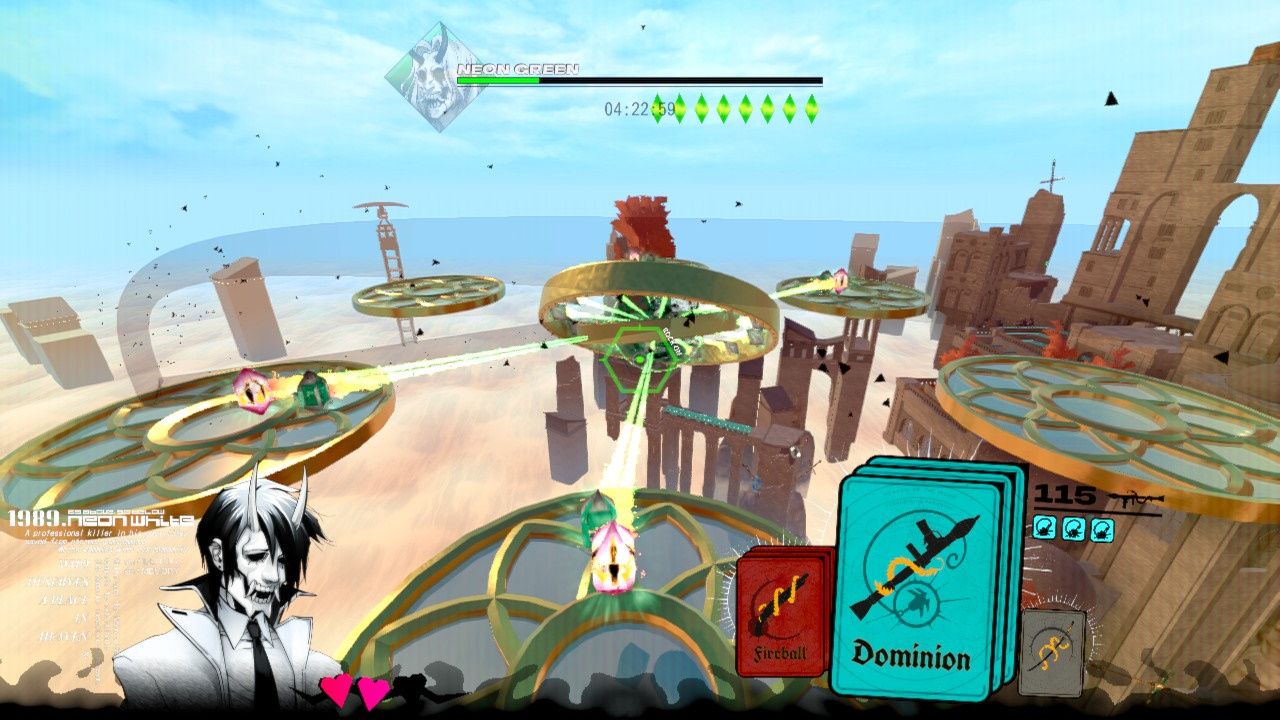 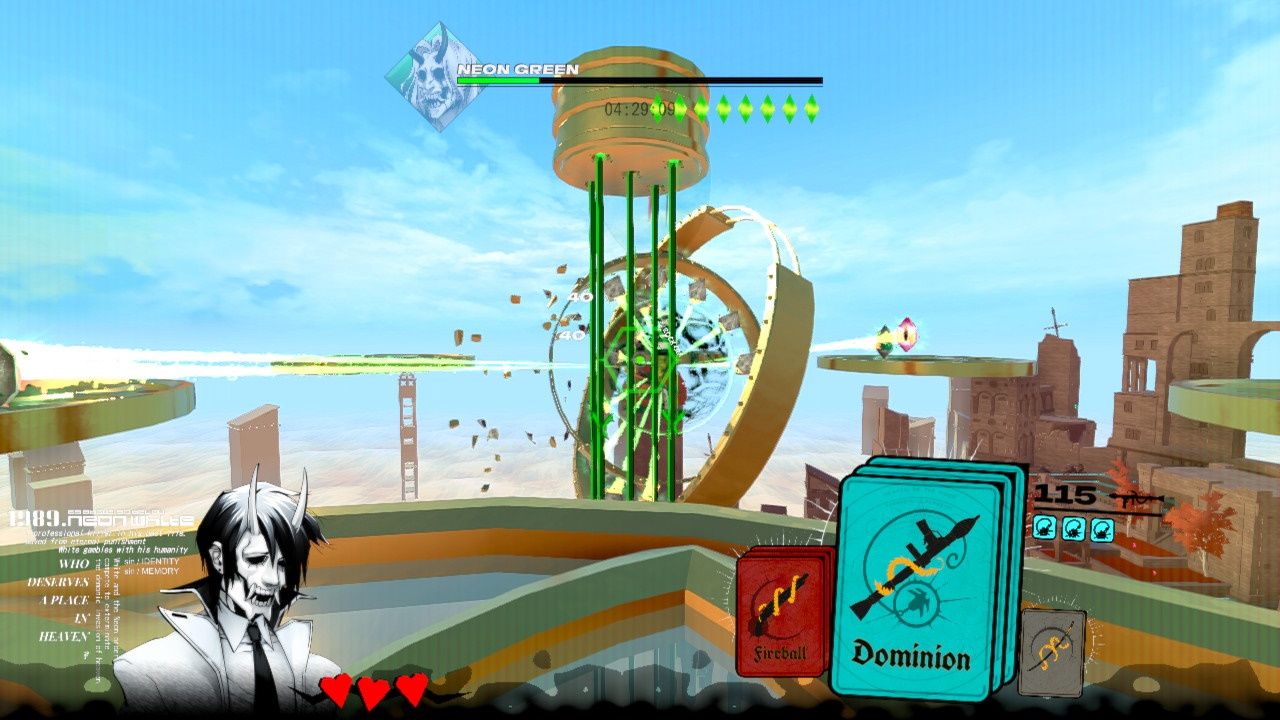 Don't be too concerned about health here. You have a TON of healing items available to you. There is one next to each one of the four crystals that surround Green. Just hop from platform to platform, taking out sections of those concentric rings. By staying mobile, you will avoid the attack where green sends a column of lasers your way. Once you get all the crystals (including the four crystals surrounding him), you get to do it all again. Nothing changes between the first and second form, so just repeat what you did the first time. 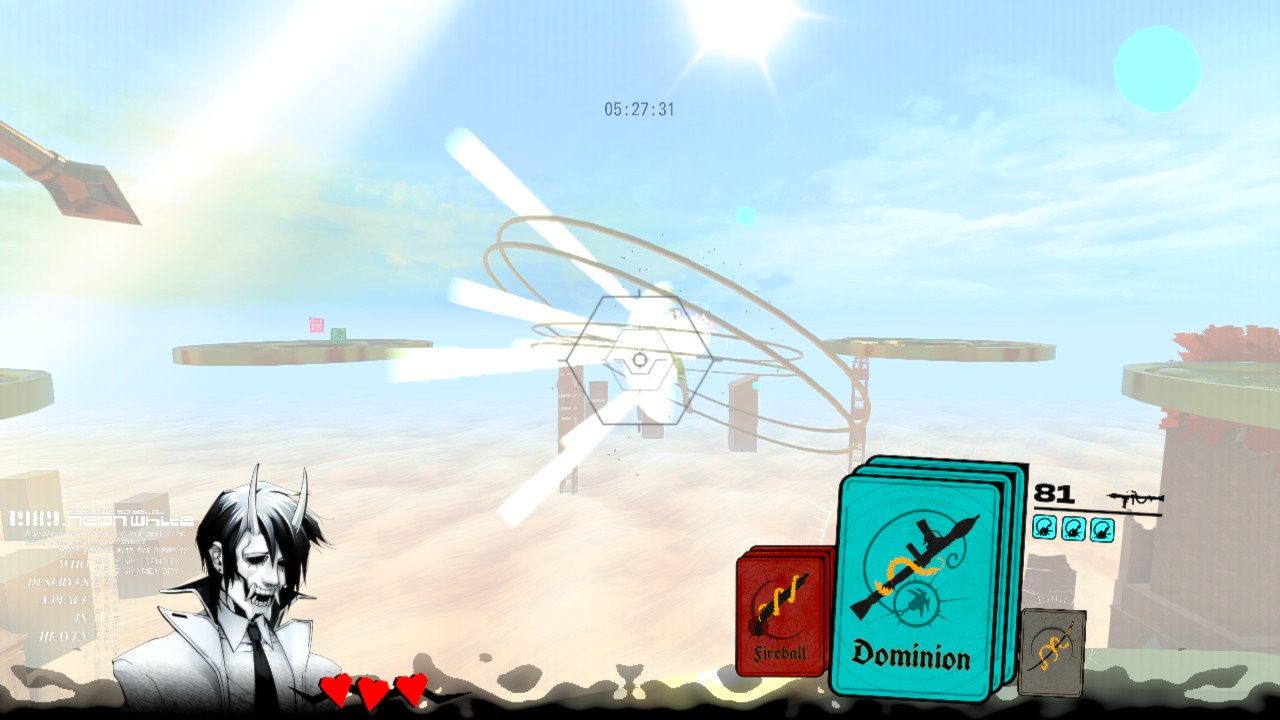 If you followed our advice, and if you made good use of the discard abilities, you will easily earn that platinum medal. Neon White gives you a ton of slack here. You can easily complete this battle with a minute to spare if you play your cards right.