Neon White's fifth mission is coming hot and heavy. It includes some tricky platforming and will require some fast clutch decision-making. You will be making good use of the newly introduced shotgun and will be ricocheting across these stages in a ball of fire. But worry not, as intimidating as some of these levels may be, we have you covered.

Each level is laced with some well-concealed shortcuts. Some will be more dramatic than others, but they will all help you obtain those coveted platinum medals. Follow this guide and your trophy case will be full to the brim with these glistening prizes! 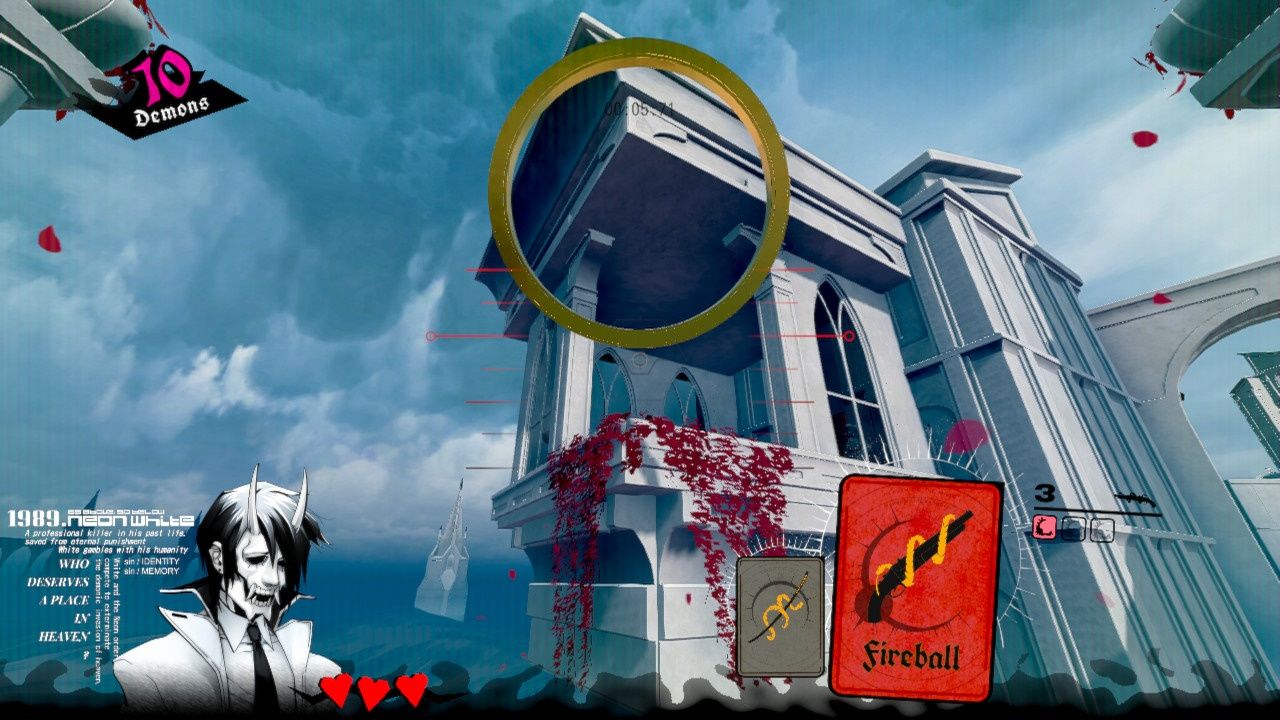 There are two major shortcuts in this level. However, before we get to those, here is a quick piece of general advice for this stage: don't aim for the center of the rings when you are using the fireball ability (the shotgun's discard ability). While the rings are there to help gently guide you, they aren't optimal and will leave you floating in the air. Instead, aim for the bottom of the ring (or just under the ring) for better results. 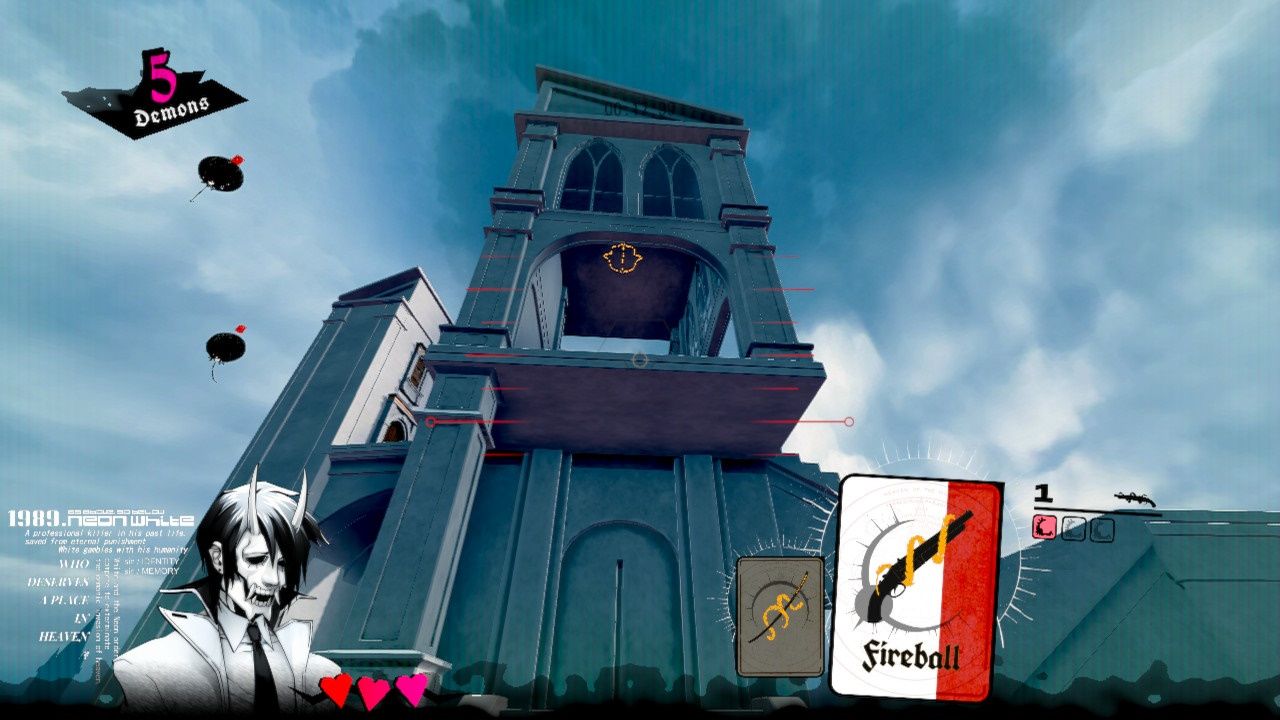 The first of the two skips comes when you hit the section with a staircase to your right. Climbing these stairs will kill your run. Instead, discard that shotgun and fireball your way to the top. If you get the angle just right you should grab the next shotgun card while you are at. 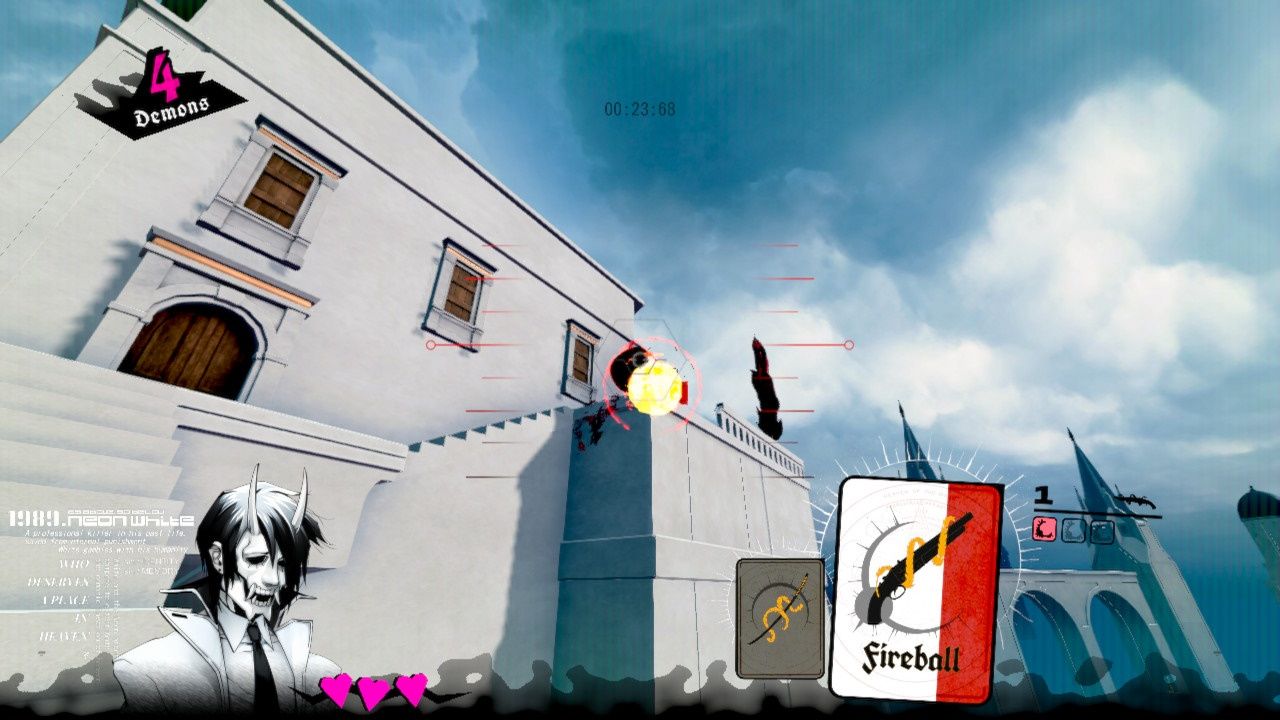 The next shortcut is immediately after the first one. After having grabbed the shotgun card, shoot the demonic head that is right in front of you, then discard the shotgun to cross the gap and blow through the next demonic head positioned at the top of the stairs. From here, just complete the stage as you normally would. These shortcuts will shave off a substantial amount of seconds from your finish time, so you should easily claim that platinum medal. 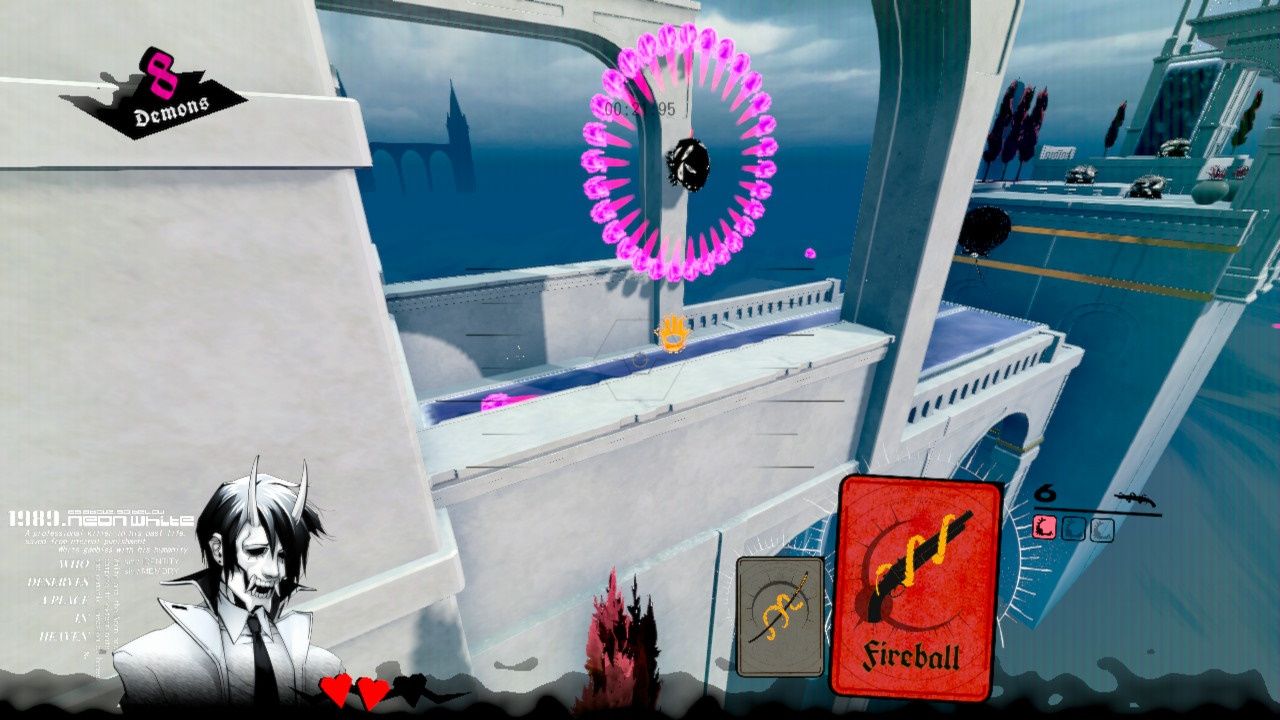 Begin the stage as your normally would. Once you hit the section with the four balloon demons, bounce up the buoyant demons, but don't go into the room they lead into. Instead, use the height they give you to fly to your right and directly to the canal. 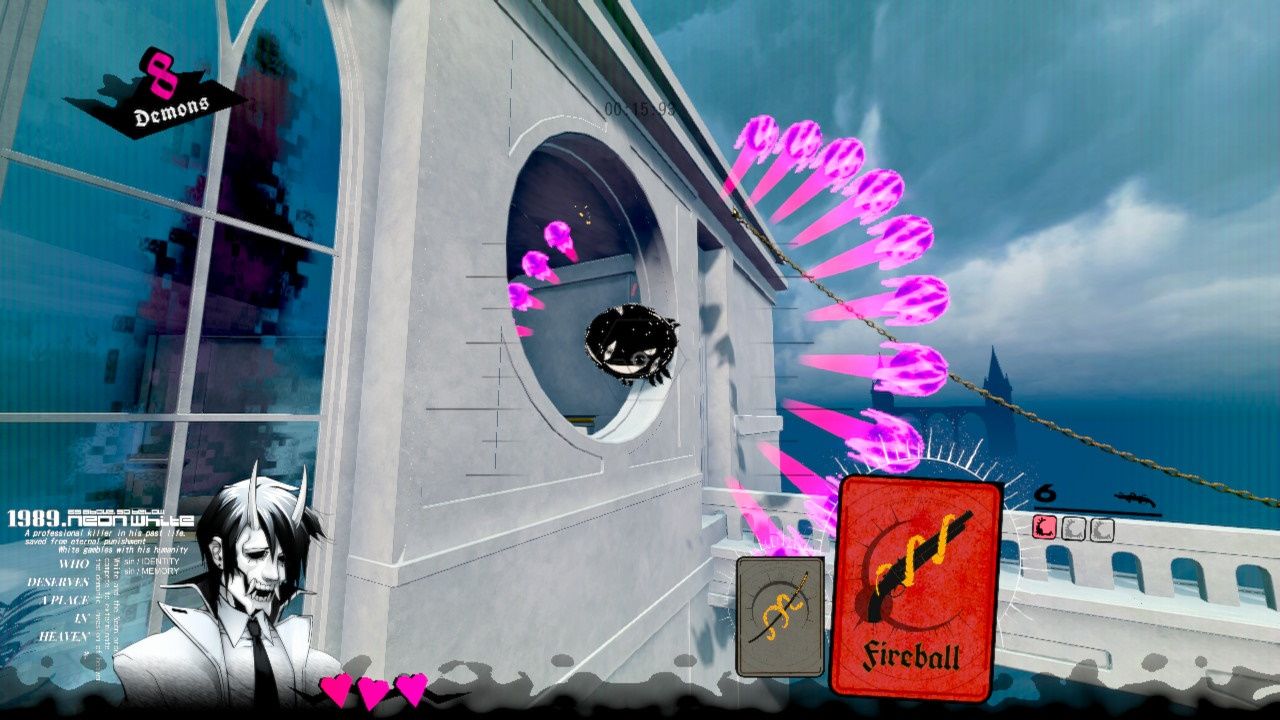 The trickiest part of this shortcut is that while you are midair, you need to shoot the demon that is sitting in the window, before you drop down into the canal and continue the stage as your normally would. With this skip, you should easily claim your platinum medal. 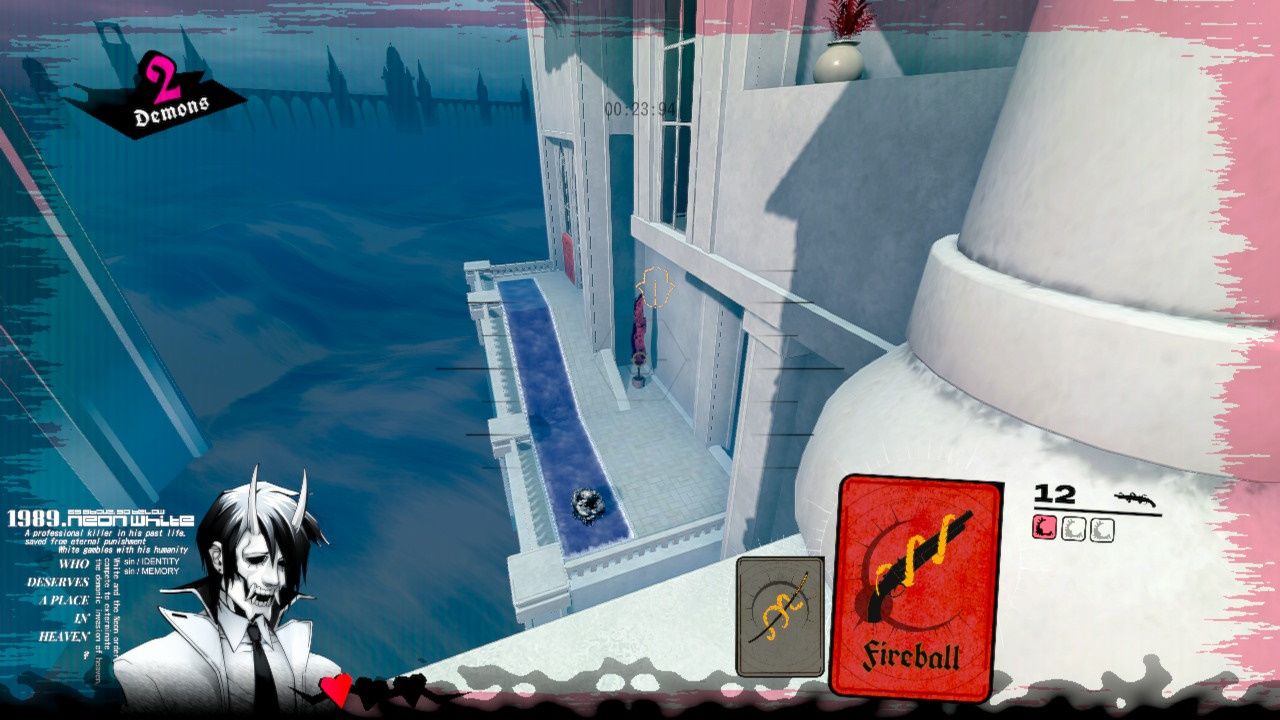 Once you reach the section of this stage where you need to cross a large gap, and there is a demonic head on the other side, use your shotgun's discard ability to cross the gap and take out the demon. Now, you will need to quickly shoot the other two demons in this room. But don't blow through the red door. Instead, drop to the canal section below (to your left). This shortcut will easily shave a few seconds off of your time. 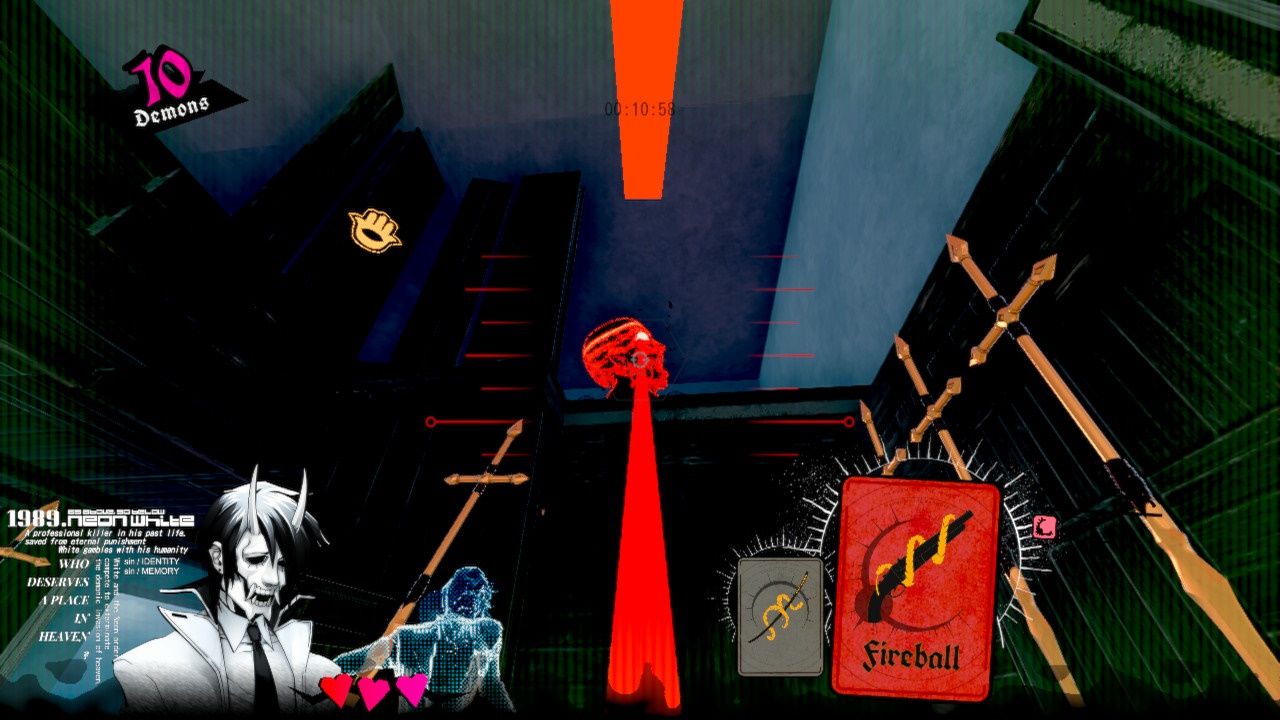 This shortcut can be a little tough to execute. Early in the stage, you will enter into a room that has two demons on the bottom floor, then one of those giant demonic heads on the second floor peering down at you. 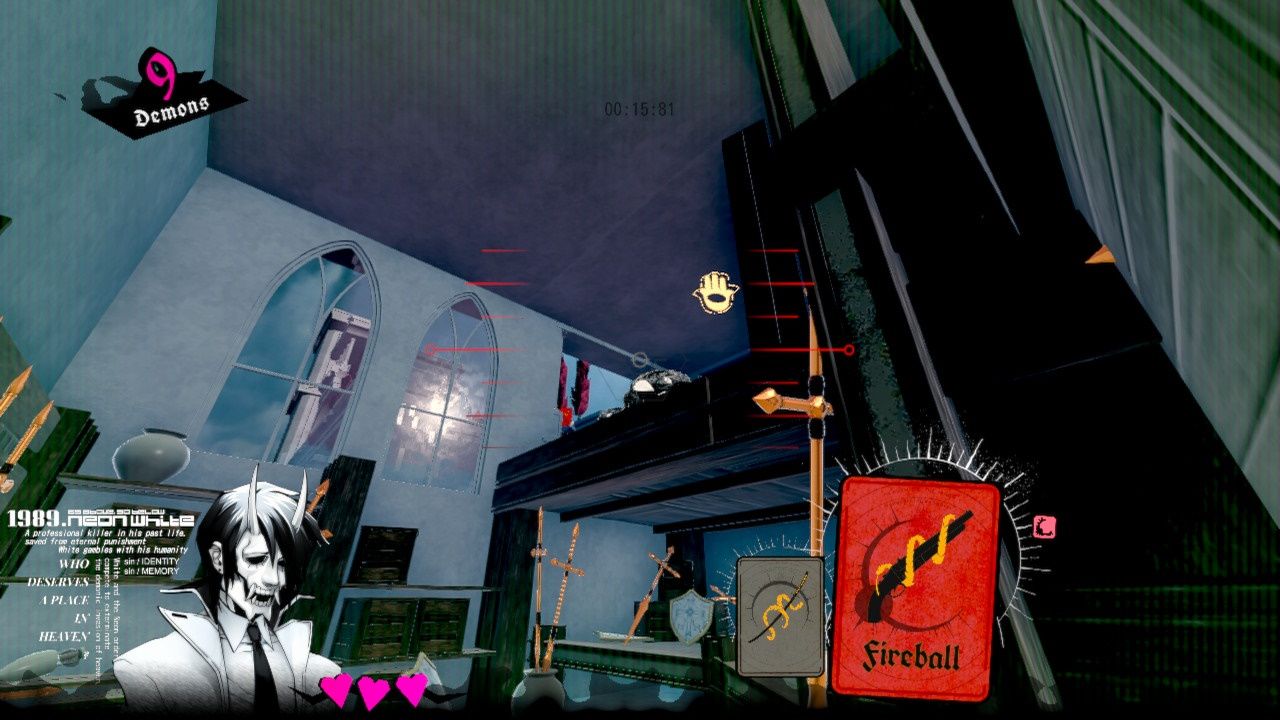 Instead of using the shotgun's fireball ability to blast through the demonic head, you want to shoot it, then turn to your left, and use your fireball ability to blow through the two demons standing next to the doorway. If you get the angle right, you will take out both demons. This is a little tricky to do, but once you get the hang of it, you will shorten your run considerably. 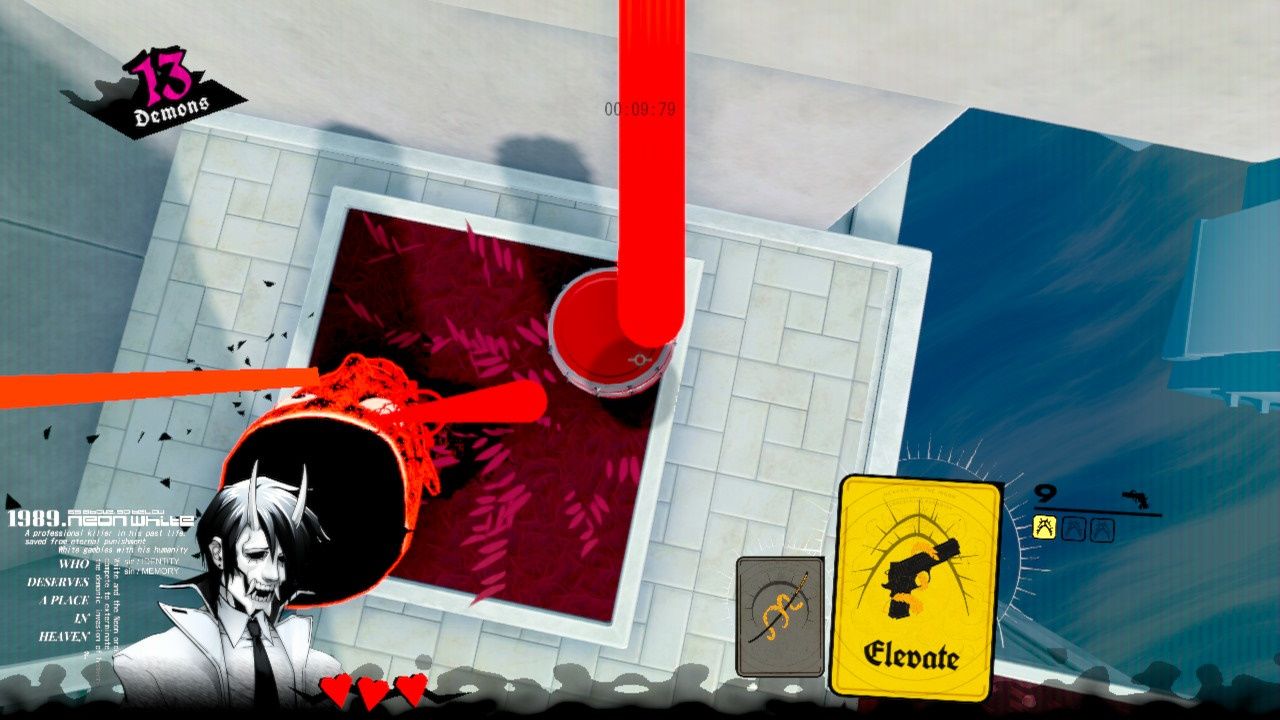 For starters, when you get to the first demonic head, make sure to not climb the stairs! Instead, run right up to the red barrel and hit it to launch yourself. 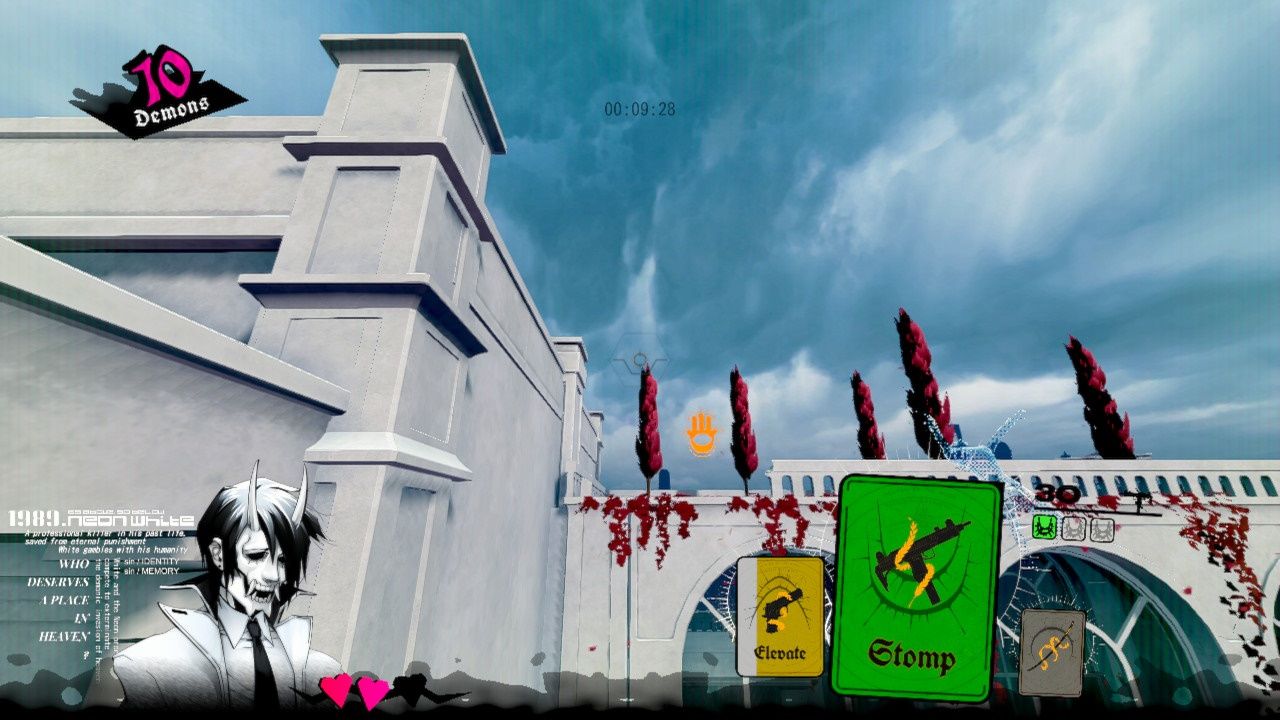 Then, do the same with the next barrel to do another bomb jump. Use that bomb jump to hop right onto the roof of the building to your right. You will need to use your handgun's discard ability to make it all the way to the roof. Just make sure to switch to it, as your currently equipped card will be the SMG (and using its ability will guarantee your sudden death). That skip should be more than enough to secure that platinum medal! 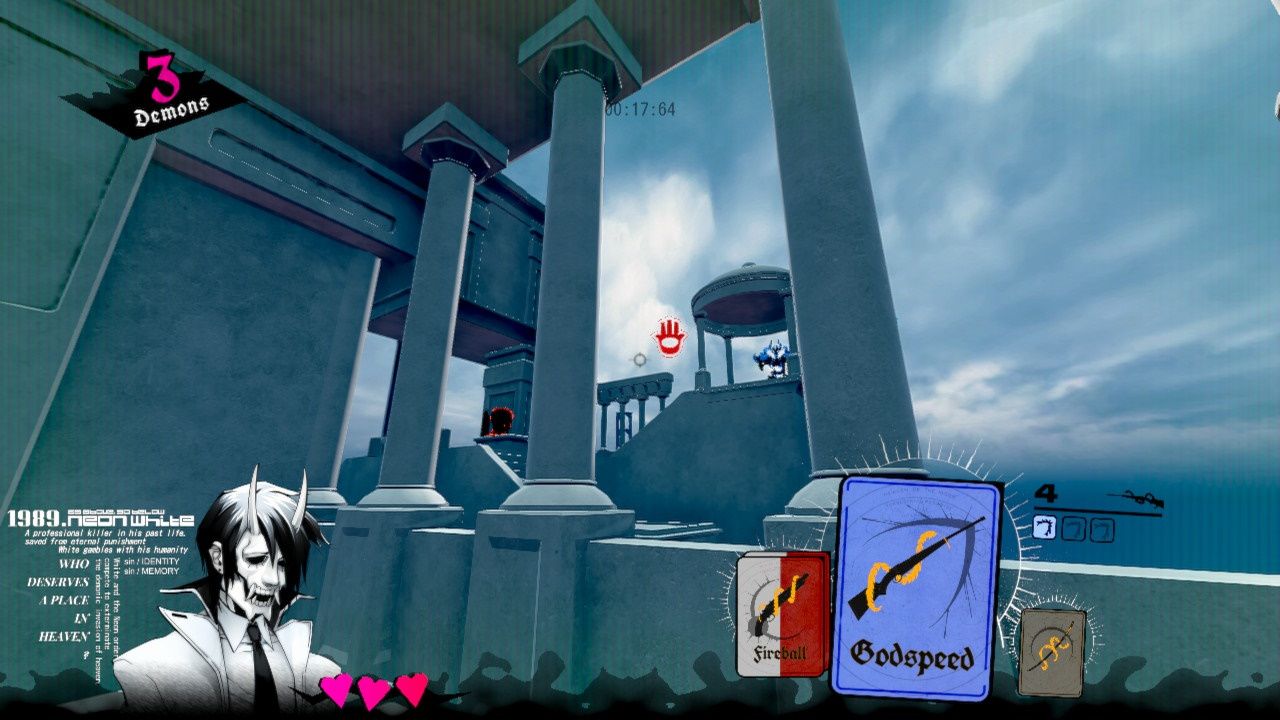 Once you enter the room with the giant demonic head and the blue demon, take them both out with the shotgun, but don't blow through the door. Instead, use the discard ability of the sniper rifle you just got to vault across the stage. 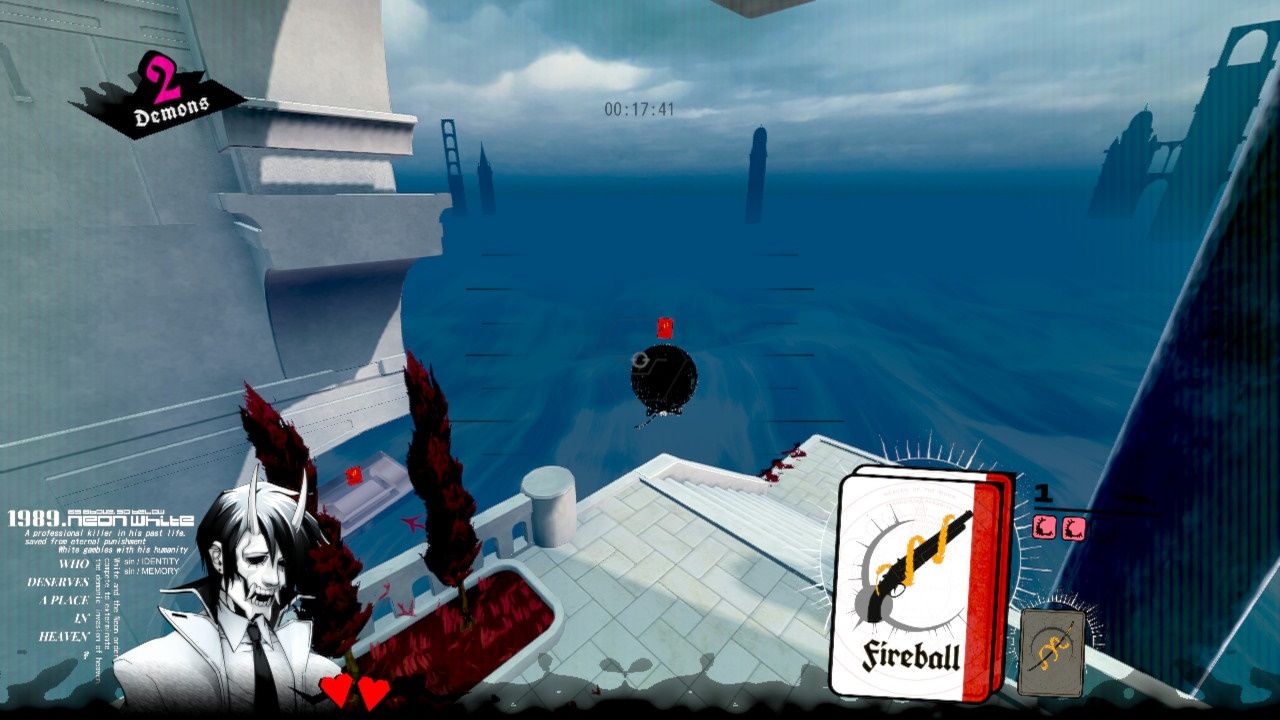 The tricky thing about this shortcut is that you will be missing a balloon demon. So, make sure to shoot them either as you are crossing the gap, or as you are taking out the giant demon head across the way. This stage has one of the tougher platinum medals to grab, so getting it may take a few attempts. 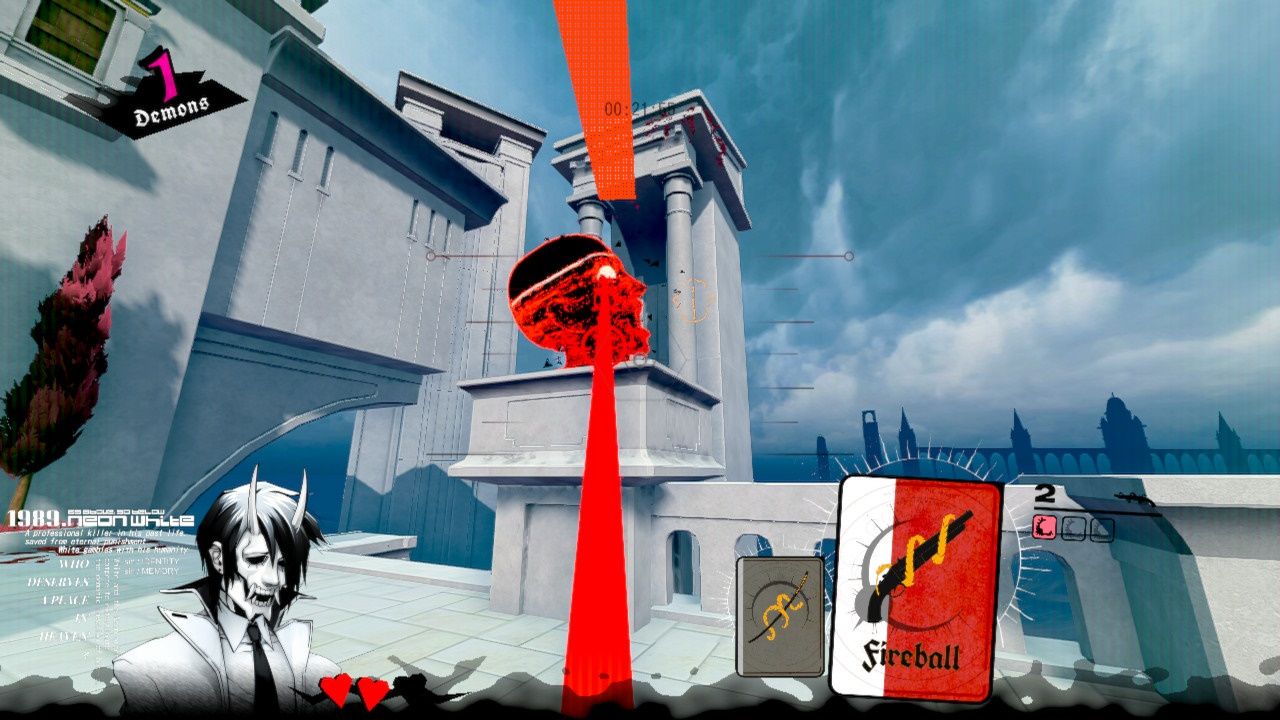 This stage's shortcut is at the very end of the level. Don't shoot the demon head, and then dash into the group with the explosive barrel to get to the exit. Instead, you want to shoot the barrel from afar and dash through the demon head straight to the level's exit. This method will give you a much tighter jump arc and help you shave off a second or two. 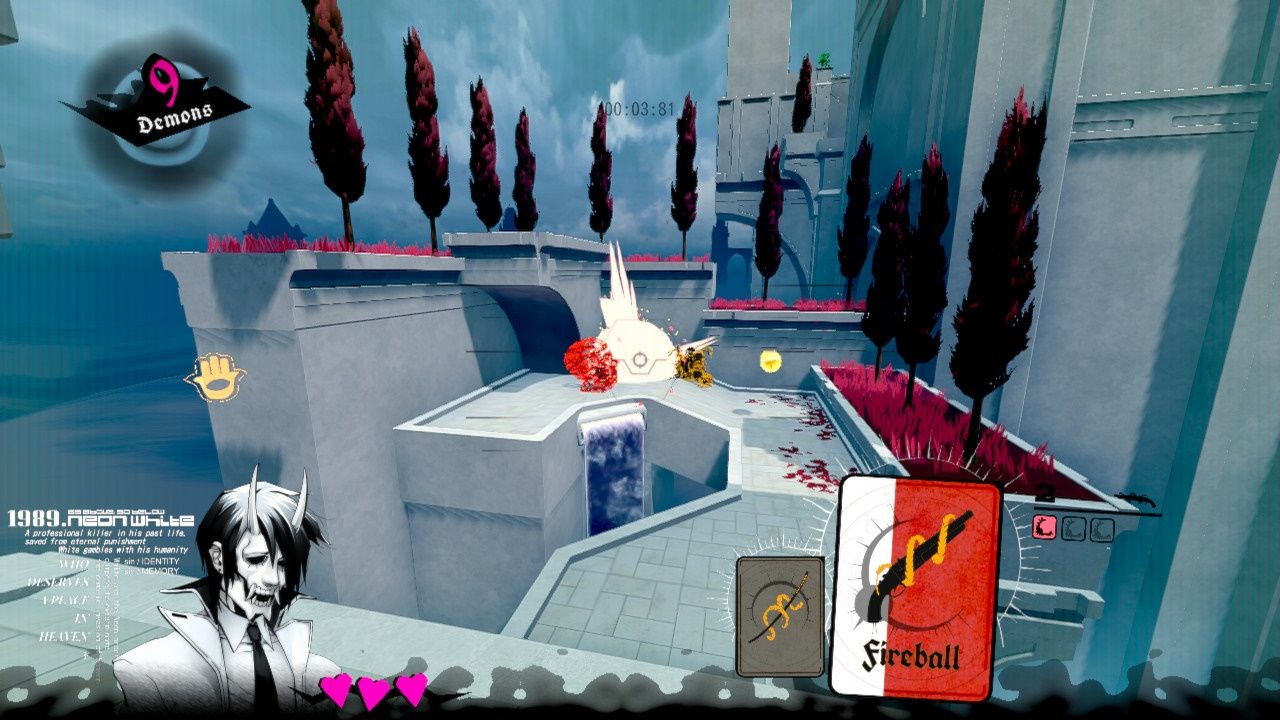 At the beginning of this stage, you would typically jump down, take out the group of demons, grab the handgun the yellow demon dropped, and then jump into the balloon demon from below. Instead of doing all that, you are going to want to simply fire on the group from afar, then jump to your left, and discard your shotgun to dash into the balloon demon. The most important element is to simply never jump down to the lower level. 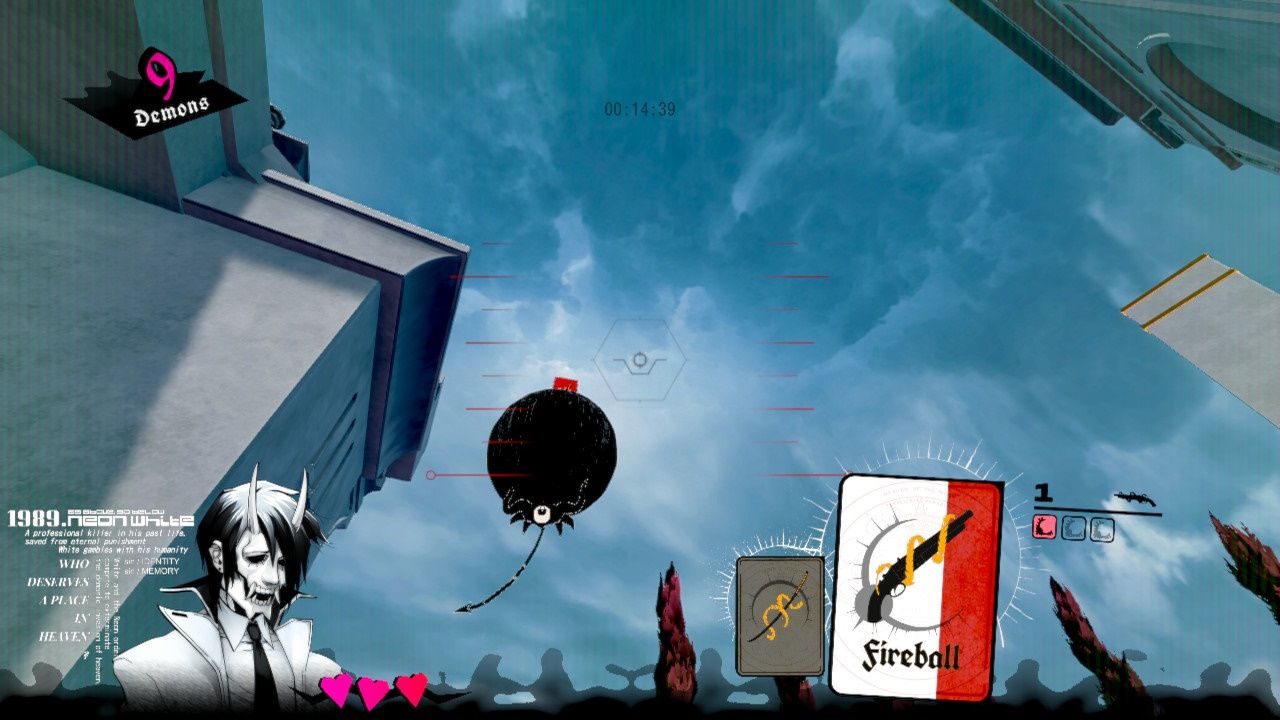 This is a very easy-to-understand shortcut once you know what you are looking at, but actually executing it can be a little tricky. If done correctly, you shouldn't have to stop to shoot. This is a situation where nailing the shortcut won't be enough to easily secure that platinum, as it probably shaves off less than a second. So, you are probably going to have to tighten up your timing with a little practice to earn the top honors here. 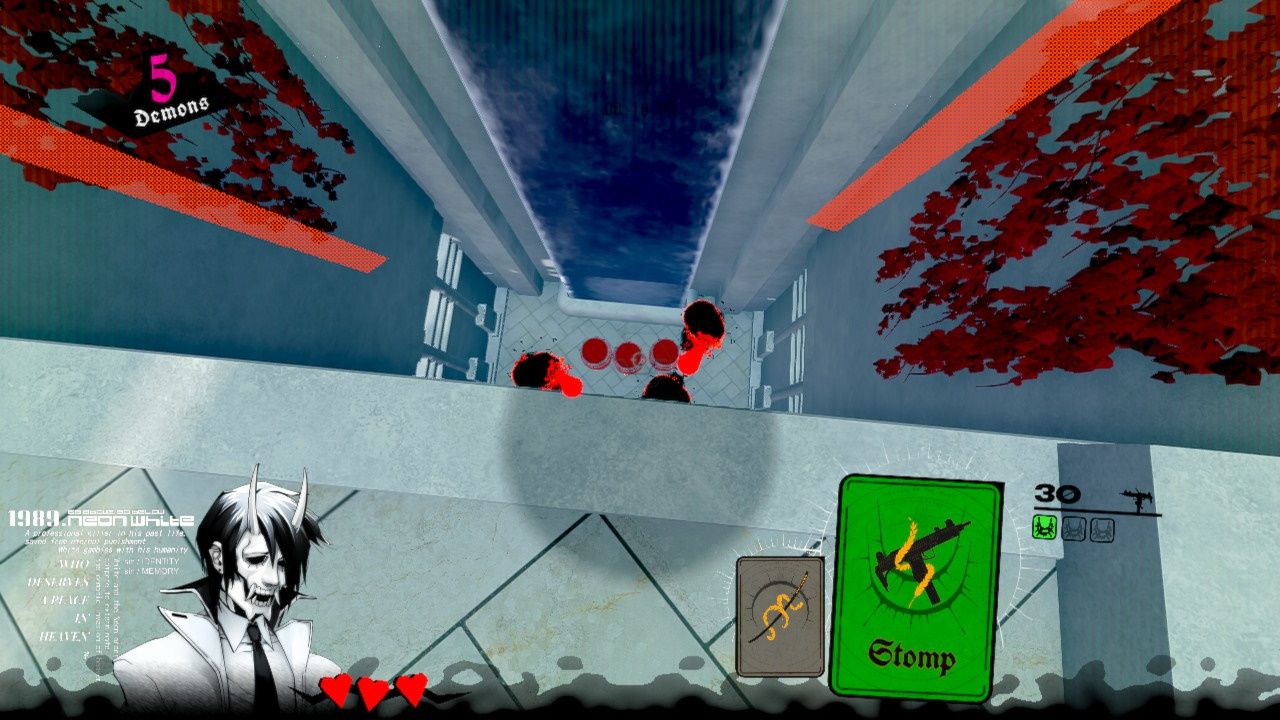 And here we have another sneaky shortcut. In this stage, you will typically perform three SMG discards to slam down on red barrels and propel yourself to the next section of the stage. However, once you get to the third group of enemies, don't slam down. Instead, hop up and shoot the red barrel down below. 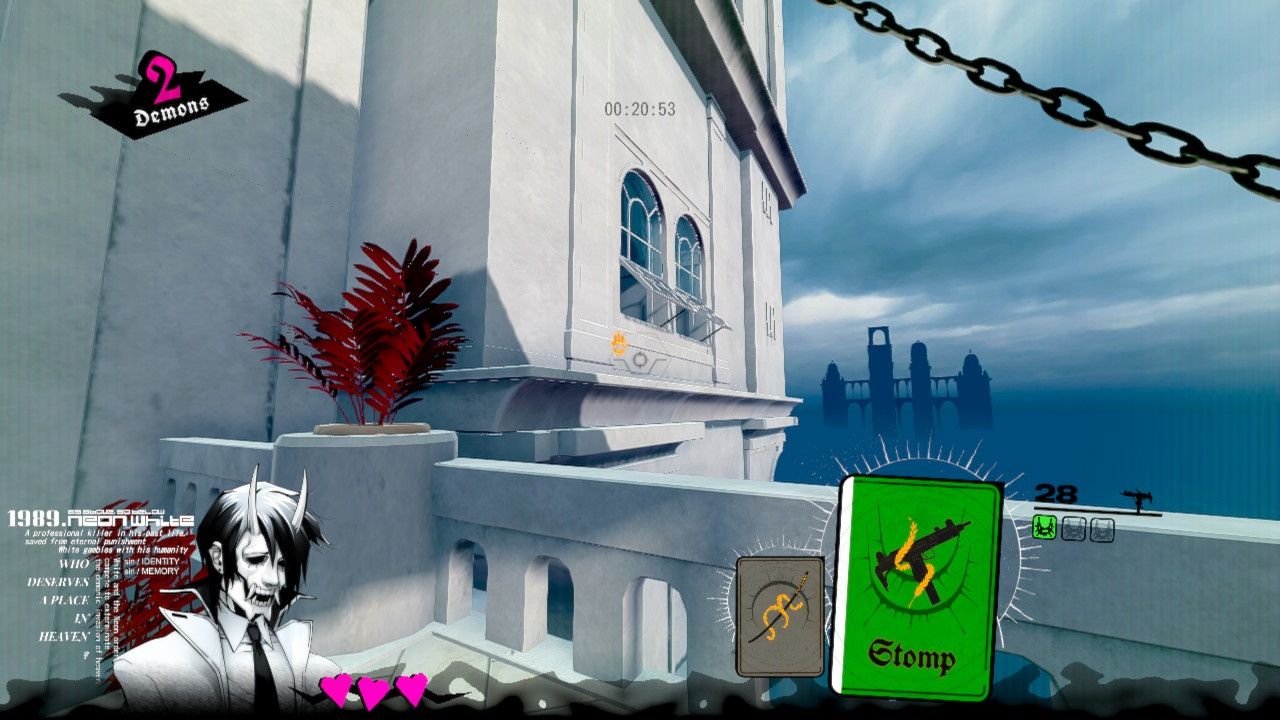 Now, after shooting the barrel, look to your right. There is a ledge within jumping distance and an open window just above it. Just jump over to that ledge and enter into the next area via that window. Then finish the stage as you typically would. This shortcut will ensure an easy-breezy platinum medal. 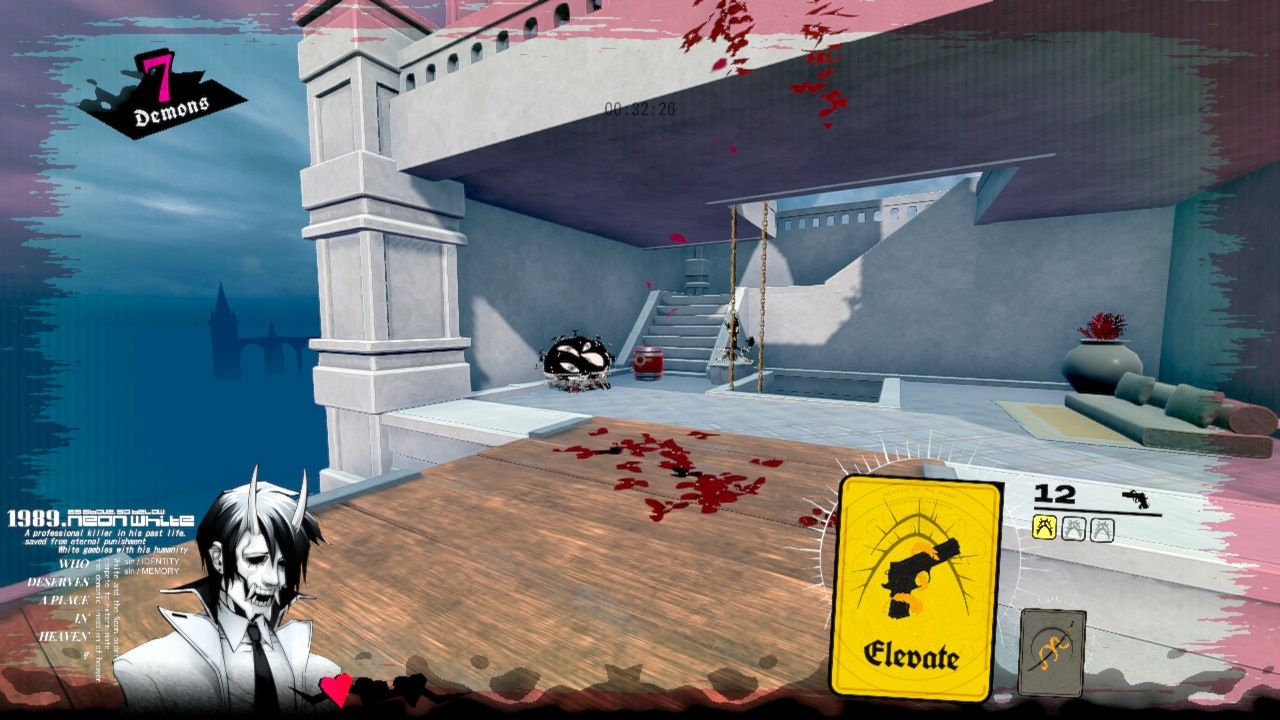 At the very end of this stage, you will use a line of balloon demons as a set of stairs to climb to the floor just below the top of the tower. Once you get past the balloon demons, quickly shoot the red barrel in front of you, then discard your handgun to hop up to the next level. That bomb jump will plop you down in front of another red barrel: slash it with your sword. This will bomb jump you up to the SMG card. Just shoot the red barrel to your left (eliminating the final enemies) and, finally, discard the SMG to slam down on the level's exit. 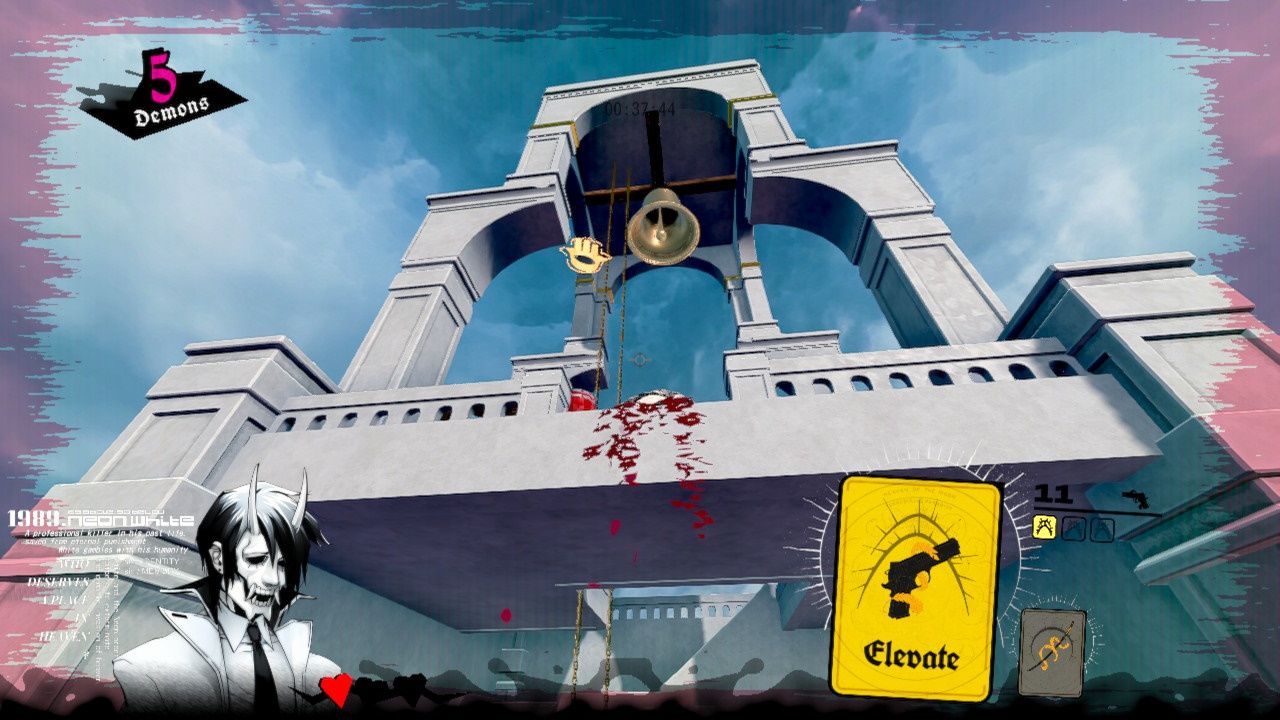 This is this mission's finale, and it has a fair amount of tight platforming and clutch shots you will need to make. So, don't be surprised if you have to repeat it a couple of times for the platinum. That being said, master this shortcut, and you will be in good shape.