New Tales from the Borderlands' Vaultlanders is an all-new mini-game that pits familiar action figures against one another in 1v1 arena battles. Like other collectibles, Vaultlander figures can be discovered and added to your roster by simply playing through the episodes and checking a location's every nook and cranny. This, of course, includes loot boxes, lockers, and desk drawers.

By the time you've collected enough Vaultlanders for your bite-sized army, you'll no doubt be presented with a slew of head-to-head battles with other citizens of Promethea. The question is, how do you play Vaultlanders, and what do you need to know to be able to win every match? 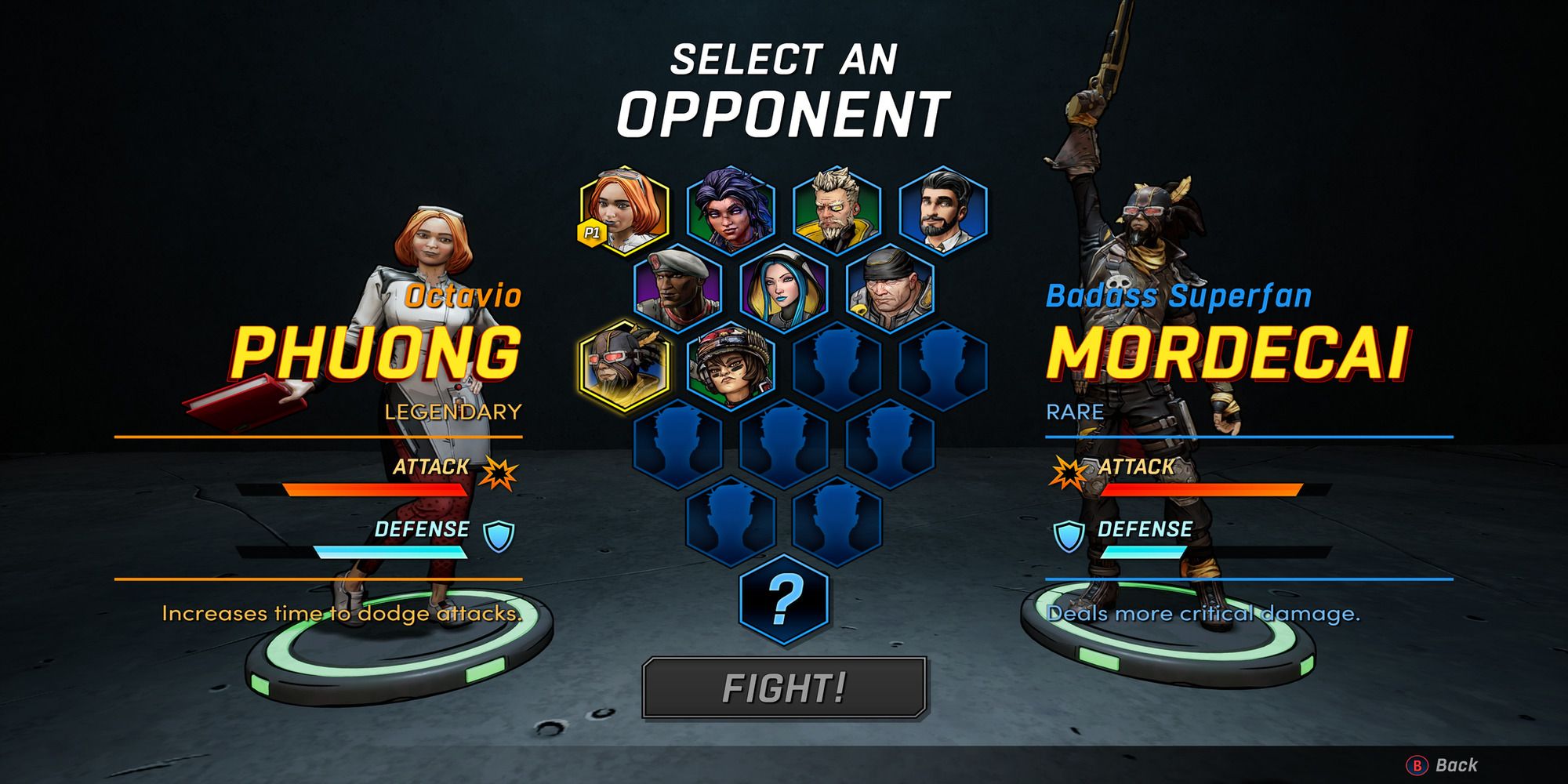 The idea behind Vaultlanders is simple: defeat the other player by chipping away at their health bar and reducing it to zero. To do this, you will, of course, need to choose a Vaultlander from your collection with higher offensive abilities. To give you an idea of what sort of stats your Vaultlander is bringing to the battle, be sure to check each available character sheet before launching the game. You will be given the opportunity to check your Vaultlanders and their strengths and weaknesses before the round begins.

Vaultlanders strengths are determined by two things: Attack, and Defense. To win battles, you will want to select a Vaultlander that strikes a perfect balance between the two. A good example here would be Phuong, a character that you unlock fairly early on in the story. The idea here is to select a Vaultlander that can whittle down an opponent's health as quickly as possible, and in turn receive less damage from oncoming attacks.

Vaultlanders are also separated by rarity: Uncommon, Rare, Epic, and Legendary. If you can unlock a Legendary Vaultlander while playing through the story, you will want to use it as often as possible during battles, as its Attack and Defense will be much higher than other rarity types.

Finally, you'll want to take a look at the abilities that each character has equipped. Depending on how you want to play the game, and how quickly you want the battle to be over, you will need to decide which character has the ability that will aid you the most during battle. For example, if you'd rather deal more critical damage, then aim for a Vaultlander like Mordecai. If, however, you'd prefer to drain additional life from your opponent, then go for someone like Vasquez. 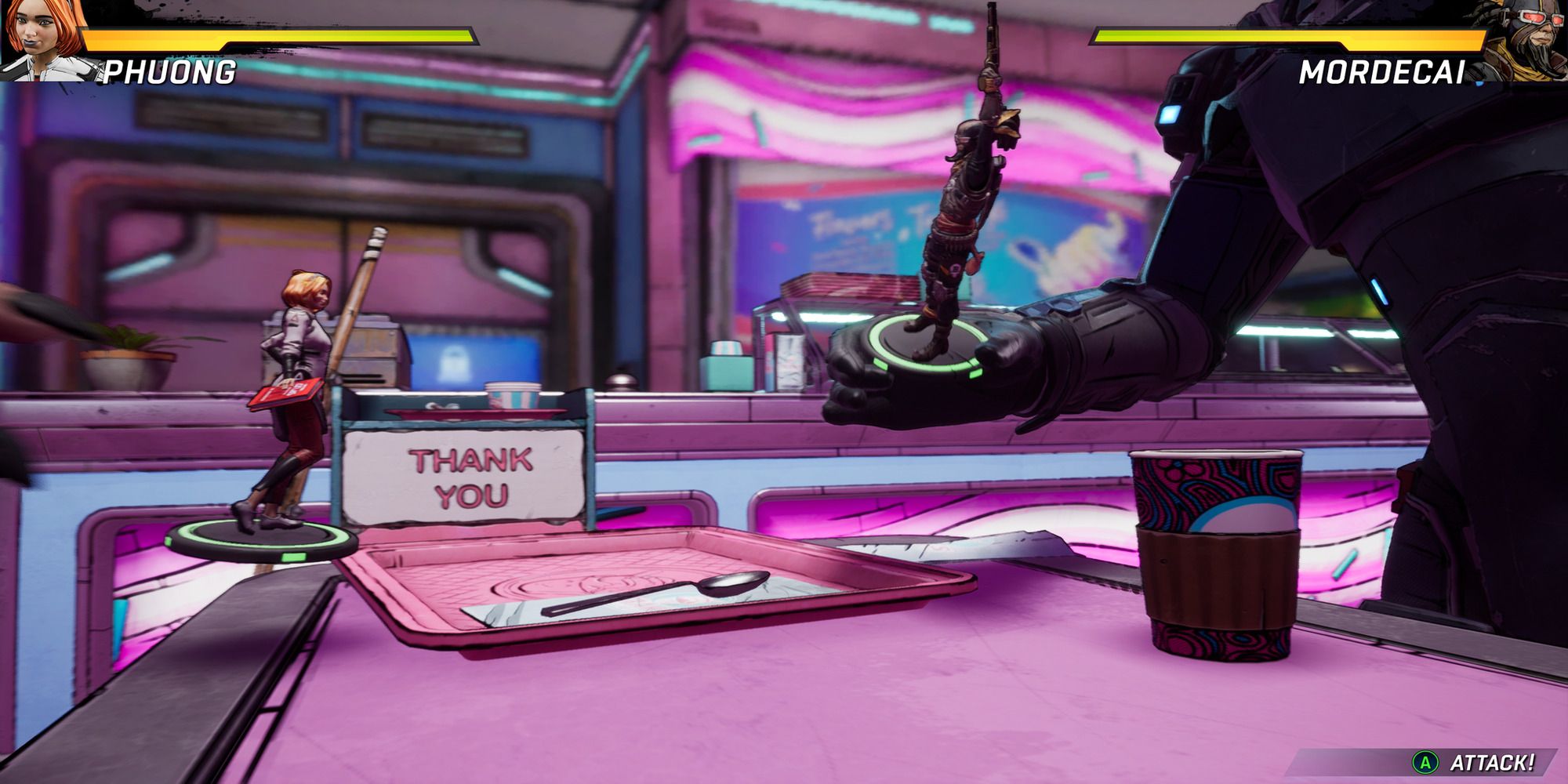 Your opponent cannot attack you when it's your turn, so you shouldn't worry about parrying, blocking, or dodging. It's merely the case of mashing the button on display until your turn is over.

Once your turn on the offense is over, you will switch to defending. To avoid taking any damage during these segments, all you will need to do is follow the QTEs (quick time events) as they appear on the screen. Nine times out of ten, these QTEs will present you with a direction in which you must tilt the stick. You will have roughly two seconds to hit each QTE, otherwise you will take damage. 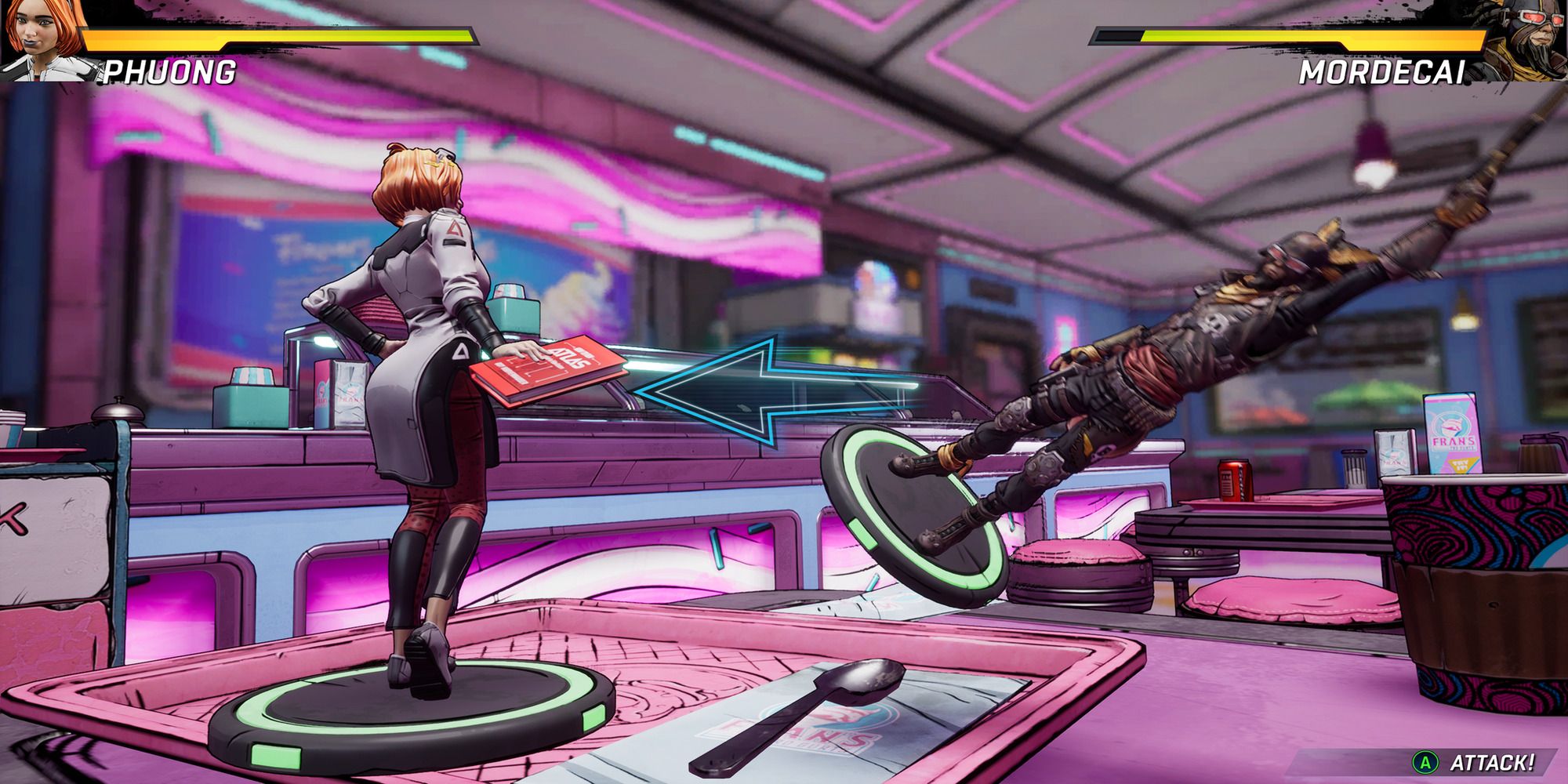 Vaultlanders plays out in two rounds – offense and defense – with the game repeating the same cycle until one opponent has lost all of their health. Your goal, then, is to alternate between laying down as much damage as you can while on the offense, and hitting the QTEs as fast as you can when on the defense.

Once you whittle your opponent's health down to zero, you will be presented with a K.O. combo QTE. If you hit this correctly in less than ten seconds, you will automatically claim the win. Chances are, though, your opponent will also be knocked out even if you fail the final QTE. If that character has an ability that grants them a second wind, then they will be handed a second chance to battle you. It is vital that you hit the QTE in the allotted time tin win the round. 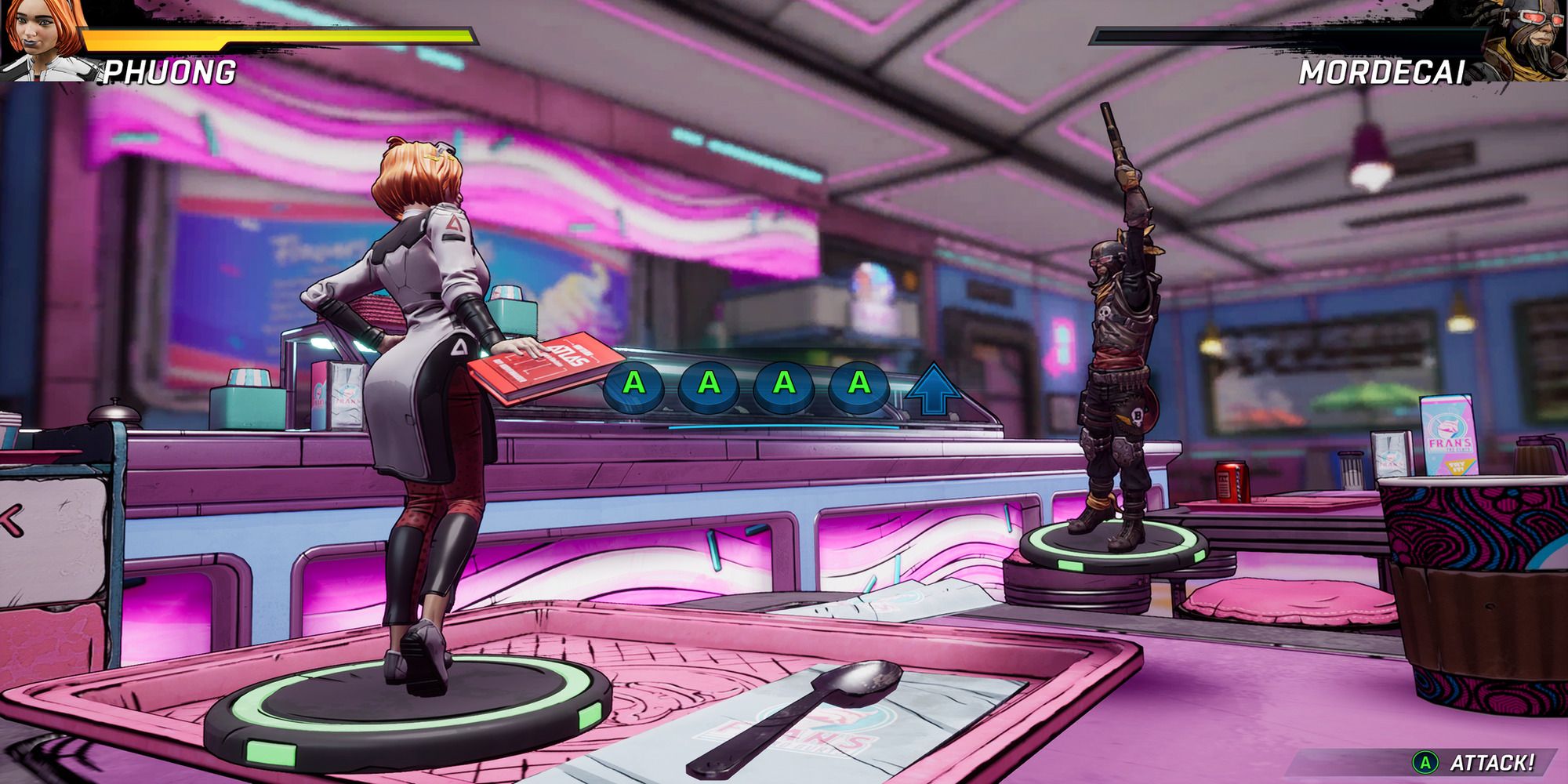 In short, Vaultlanders is pretty straightforward enough to learn, and yet surprisingly tough to master, depending on the enemies you face and the characters you choose to hold your side of the fort. To win any battle, either in the main story or in the separate Vaultlanders mode, you should aim to play as a character that has a high rarity type, and with more Attack than Defense. As avoiding enemy attacks is relatively easy and somewhat forgiving, your goal should be to win the battle as quick as possible using brute strength alone.

Practice Before Playing For Real 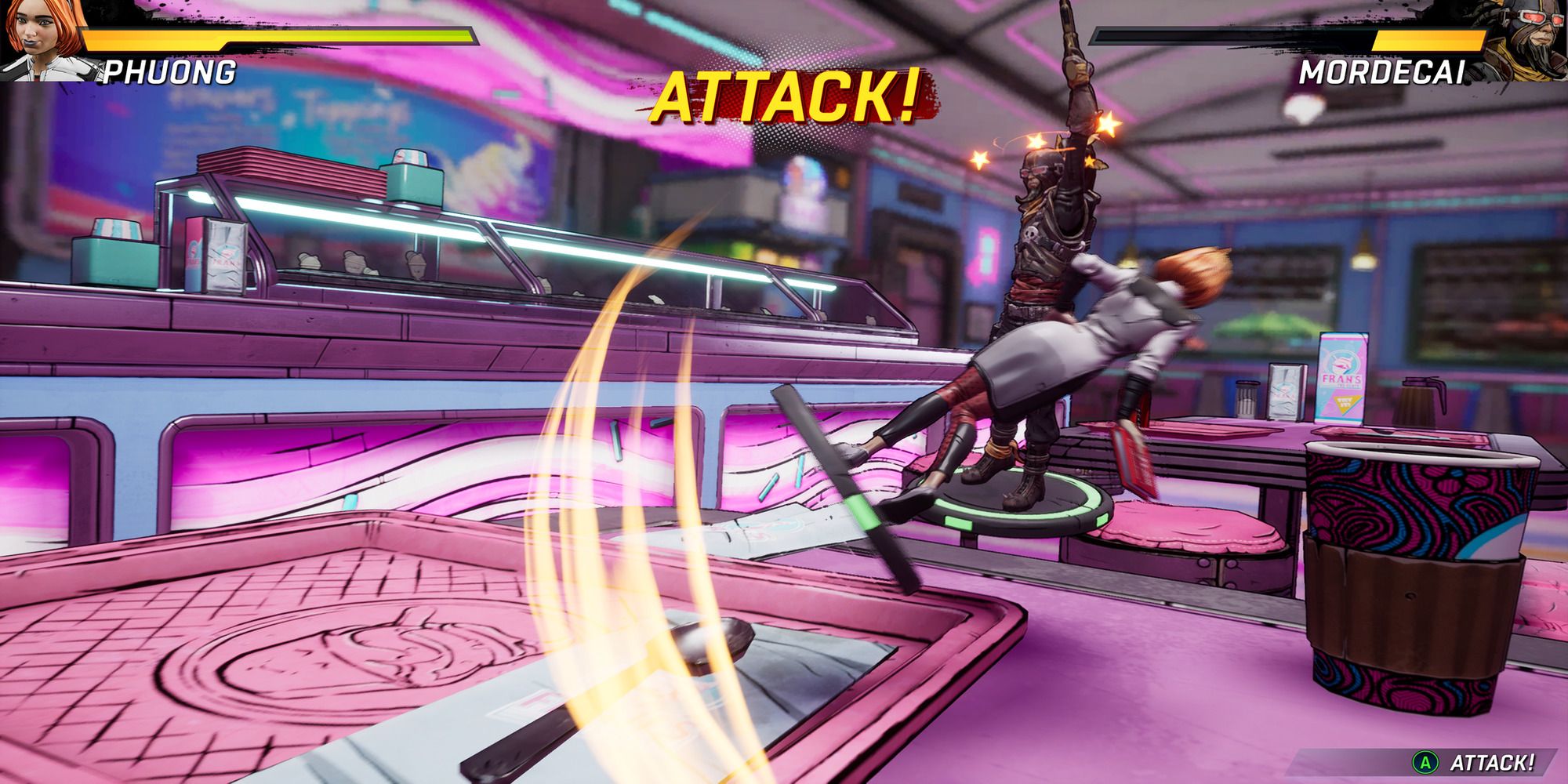 Vaultlanders is a game that tends to pop up at the most unusual times in New Tales from the Borderlands. For example, one of your ongoing foes, who is a slightly awkward Tediore solider, makes a habit out of hopping out of the most unlikely places to challenge you to a game on the spot. If you win, then you receive the Vaultlander that he used in the battle. If you lose, you not only miss out on the Vaultlander, but the outcome of the story will change ever so slightly.

To avoid making any mistakes and disrupting the flow of the narrative, you should aim to practice playing a few rounds before playing any of the five episodes. You can boot up a practice round by going to the Main Menu, and then to Extras, followed by Vaultlanders Battle. As you collect more characters during your time in any of the five story episodes, you are of course encouraged to return to the Vaultlanders Battle mode to test your new allies in battle. 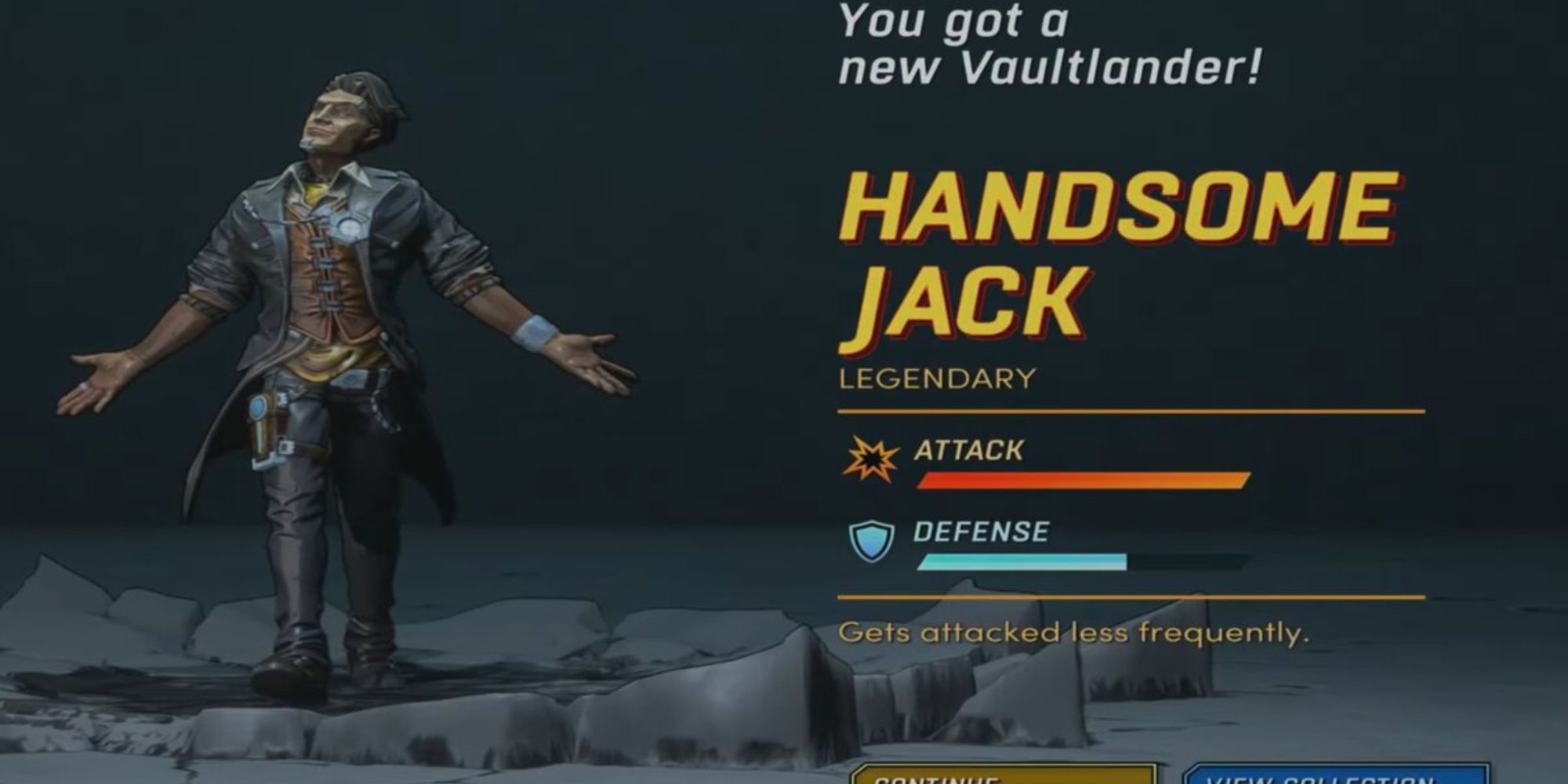 There are 16 Vaultlanders to collect in New Tales from the Borderlands, all of which can be acquired by playing through the five episodes and watching the ending. After you have beaten the story, you will be able to play Vaultlanders freely via the Extras. The characters you'll want to keep an eye out for in order to maximize your chances of winning future battles are as follows:

Unlocked in Episode Five when you explore Susan Cowell's office. To the back of the office you will see a red X. Activating this will initiate a duel, which you must win to claim the Handsome Jack figure.

Unlocked in Episode One when Anu escapes the Atlas Spaceship. Phuong will hand the Vaultlander figure to you before leaving to make a distraction.

Unlocked after finishing Episode Five. You will need to have both Octavio and Anu's friendship at 50 percent or higher to claim the Lilith figure.

Unlocked after finishing Episode Five. You will need to have both Fran and Anu's friendship level at 50 percent or higher to claim the Fiona figure.