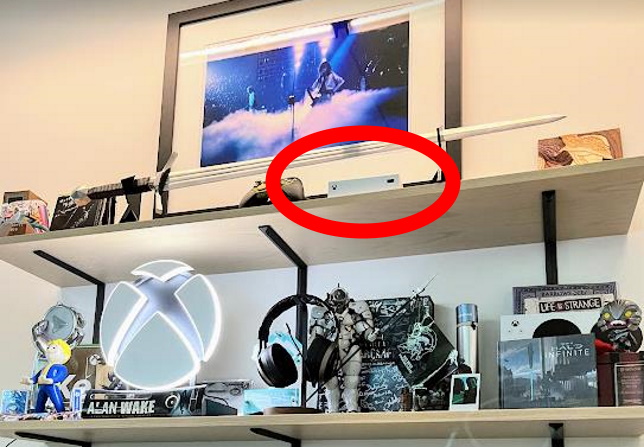 Xbox boss Phil Spencer has once again teased the existence of new Xbox hardware and this time it seems to be the promised streaming device.

Microsoft has had a pretty good 2022, but that’s despite not having released any major new exclusives. Instead, most of its success has come from the popularity of Game Pass, whose great value for money has proven very timely, but it does have another ace up its sleeve, in the form of its streaming service.

Although it’s been up and running for a while Microsoft hasn’t made much of a fuss about streaming so far, as it works out the kinks and waits for broadband speeds to improve. The next big step will be the release of a standalone streaming device, which Phil Spencer seems to have semi-secretly revealed.

He’s done this before, where it turned out he had an Xbox Series S sitting on the shelf in the background, of video interviews he did during the pandemic, and now there seems to be a new device lurking behind him, which has been positively identified as the hardware codenamed Keystone.

Although the whole point of streaming is that you don’t need a console to run games you do need some kind of device to connect to a TV and controller, and that’s what Keystone is.

Sometimes this is little more than a USB stick, like the Chromecast Ultra for Google Stadia, but the Keystone is a bit bigger than that.

Microsoft did officially announce it last year but has never shown or talked about it publicly. It’s imagined it will work like a smart TV with a basic interface to select games and other media apps like Netflix and Disney+.

There’s already an Xbox TV app for Samsung TVs and monitors, so Keystone would likely use a variation of that.

Microsoft is barely making an effort to deny that the box on display is the streaming device, with the official Xbox Twitter account saying: ‘Now what did we say about putting old prototypes on your shelf boss.’

The Verge writer Tom Warren has also claimed it’s ‘100% Microsoft’s Xbox game streaming device’, although if it is a prototype its external design may still change a little before release.

It’s not clear when Microsoft will launch the device, but it’s not likely to be expensive as there are few internal components. If there’s a version bundled with a controller though that would be upwards of £54.99 – the current price of a wireless gamepad.