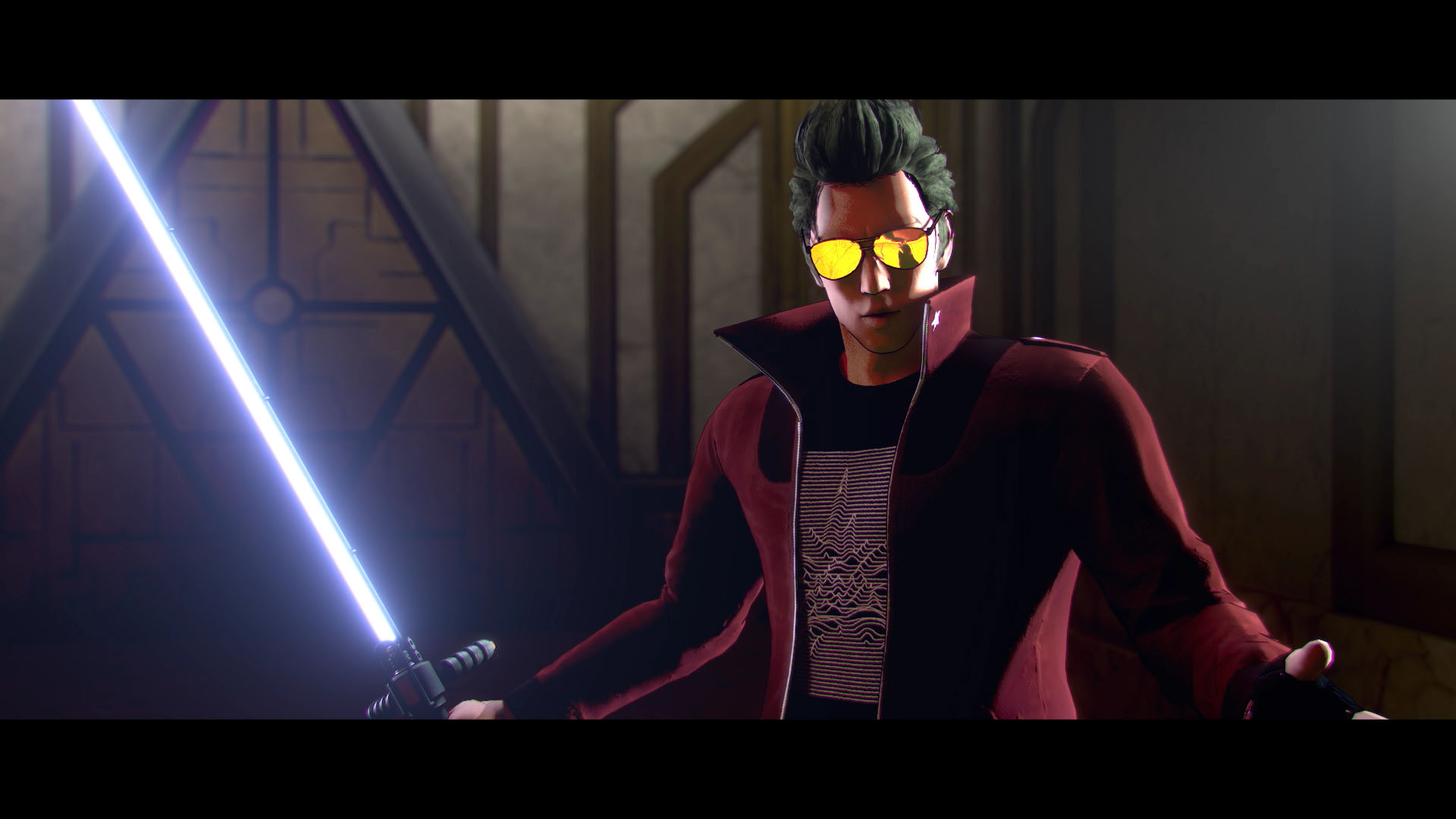 Suda51 returns with what he promises will be the last No More Heroes game, but does Travis Touchdown still retain his earlier appeal?

The logo for developer Grasshopper Manufacture insists that ‘Punk’s not dead’, and for a time during the 2000s it was able to ensure that was true, thanks to the efforts of founder Goichi Suda, aka Suda51. With titles like The Silver Case, killer7, Lollipop Chainsaw, Killer Is Dead, Let It Die, and the original two No More Heroes he earned a reputation for fiercely individual games that mixed surrealism with arcade sensibilities and deeper narrative themes.

Unfortunately, as Suda took on more of a managerial role, both the quality and quantity of games began to decrease, with 2019’s highly disappointing spin-off Travis Strikes Again: No More Heroes suggesting that he may have lost his touch. The good news is that this third title is a considerably better game, even if its still not up to the standards of Suda’s best.

What exactly was going on at Grasshopper the last few years we’re not sure, but they suddenly have five games in production at the moment, three of which are new IP. No More Heroes 4 is not one of them though, as Suda has said that this will be the latest entry in the franchise, in part because he doesn’t want to work on IP he doesn’t own and in part because it’s hard to know where to go after this insanity.

If you haven’t played the previous two No More Heroes games (or the spin-off) there’s no need for a recap as they’re only loosely connected. Previously they’ve revolved around anti-hero Travis Touchdown’s attempt to become, and remain, the world’s number one assassin, in a surreal deconstruction of then current video game tropes. This game though opens with a young boy befriending an alien named FU, who he helps to return home, E.T. style, and who repays his kindness by returning 20 years later to conquer Earth with this supervillainous cohorts.

Finely polished is not a phrase you’d ever associate with Suda’s work and the previous No More Heroes games were especially rough around the edges, to the point where it often wasn’t clear whether the empty open world and mindless mini-games were meant to be parodies or not (they were, according to Suda when we interviewed him a few years ago).

Apart from the recent Zelda: Skyward Sword remaster, this is one of the few games that suggests you play using the Joy-Con’s motion controls, although it works perfectly well with a Pro Controller set-up as well. At heart you’re just dealing with standard light and heavy attacks, but Suda’s love of wrestling means there are a lot more options beyond just waving your sword about – to the point where the initial tutorials can be quite overwhelming in terms of the number of different moves and buttons thrown at you.

Although you no longer have to worry about incoming high or low attacks there’s instead a new emphasis on jumping attacks, wrestling moves performed while an enemy is stunned, and your Death Glove (a nod to the infamous NES Power Glove) which unleashes more powerful moves on a cooldown. There’s now only one type of lightsaber beam katana to worry about but the new additions equal out the subtractions and the combat remains a lot of fun, especially given the difficulty, and satisfaction, in racking up 100+ combos.

The alien x superhero theme allows for some interestingly bizarre enemy types, who differentiate themselves not just visually but also in terms of their abilities and which of your attacks are most effective against them. Some enemies are more vulnerable to kick attacks or counters after a dodge, while others can disable your moves, ensuring you can’t rely on the same techniques throughout.

It’s not very different from the previous games, and doesn’t evolve much as you progress, but it’s a solid and enjoyable combat system. The boss battles should have been the highlight but unfortunately they’re frustratingly inconsistent. Half of them are really good, with clever puzzle-based solutions rather than just rote pattern learning, and the other half… aren’t. That would’ve been easier to forgive if the good ones were evenly distributed throughout the game but alas the whole experience gets increasingly less interesting as you progress.

No More Heroes 2 didn’t have an open world, you just selected options from a map, but this goes back to the structure of the first game, as you have to earn money to take on bosses by performing menial tasks (aka mini-games). That worked when the game was parodying Grand Theft Auto et al. but it makes much less sense in the context of alien invasion, as does the idea that you’re once again working your way up a leaderboard of enemies.

Curiously, there’s no longer sections where you take on cannon fodder enemies in their own levels, before getting to a boss, which seems a very odd decision given the combat is the best bit and there’s a much greater variety of enemies than the previous games. You do have to fight other opponents before getting to a boss, but only within smaller arenas. This makes them feel like unwanted filler rather than the appetiser before the main course.

No More Heroes 3 is filled with fourth wall breaking jokes and Suda’s ongoing obsession with 80s and 90s pop culture, interspersed with some newer references to things like the Marvel Cinematic Universe. Equally familiar are the points at which the game starts parodying other genres, including a visual novel and Project Zero (which Suda also worked on), but those references are beginning to feel equally outdated.

It’s now over a decade since No More Heroes 2 and it seems clear the franchise should have ended there, not just because this new sequel doesn’t do anything new but because the tropes the original two were mocking are no longer as relevant as they once were. There are enough highpoints here to make it clear that Suda and his team still have much to give to the gaming world but the best thing about No More Heroes 3 is knowing it’s the last one.

In Short: A better game than the earlier spin-off but Travis Touchdown’s time is clearly over, even if he is still able to provide some entertainingly odd boss battles.

Pros: The combat is great and some of the boss battles are extremely clever. Bizarre presentation and constant fourth wall breaking can be funny.

Cons: The gameplay is still very similar to the originals and doesn’t evolve much as you progress. Frustrating game structure can be suffocatingly dull and the satirical edge of the earlier games is much diminished. Inconsistent boss encounters.