Within 30 seconds of playing Finding the Flowzone, OlliOlli World’s final DLC, the words “holy shit” had already fallen out of my mouth more than once. As I flew through a Wind Zone and skated faster than ever before, it felt like OlliOlli World had been holding back this whole time. As if it was saving up its final burst of energy and imagination for one last hurrah in the sky.

That’s exactly what Finding the Flowzone is – the last hurrah. One more chance to go balls to the wall with everything OlliOlli World introduced, and truly push itself to the limit.

I was incredibly fond of OlliOlli World when it launched, giving it a perfect score thanks to its flawless movement mechanics, amazing style, and near-endless replayability. I wasn’t quite as enthusiastic about its last DLC pack, Void Riders, which, other than a space theme that introduced tractor beams as its big gimmick, felt like more of the same. That isn’t a bad thing considering how great that ‘same’ is, but I wanted to see OlliOlli World do more with its mechanics. 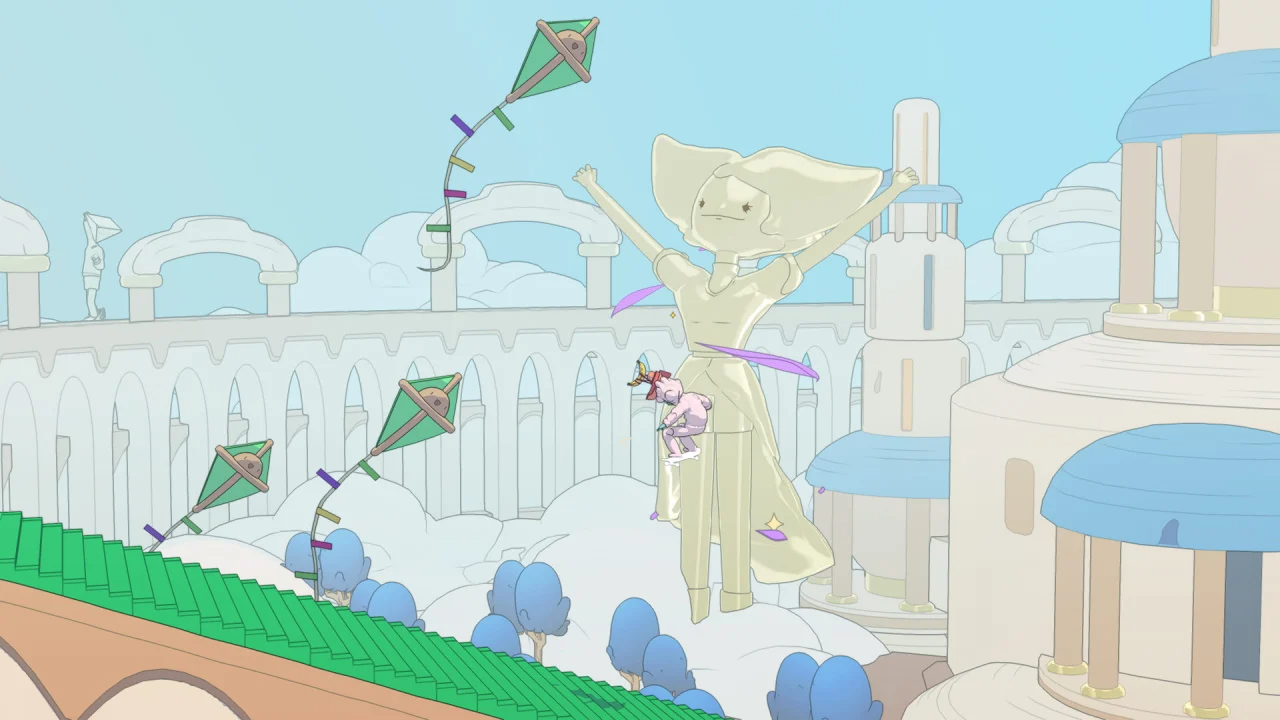 Finding the Flowzone is exactly what I wanted Void Riders to be, while also being a fitting goodbye to OlliOlli World, and a hopeful look towards the future. Structurally, it’s very similar to Void Riders, having the same amount of levels and introducing one main new mechanic, but what it does with those elements is what makes it feel so special.

The theme of Finding the Flowzone is “sky pirates”, and it sees you teaming up with three adventures as they look for the flying lost city of Radlantis, high up in the sky. This time around, levels aren’t just alternate versions of places we’ve been, but entirely new locations surrounded by storms, clouds, and sunshine. Taking place high above the clouds also gives a good reason for Finding the Flowzone’s main gimmick – Wind Zones.

These Wind Zones are dotted around each level and give you a speed boost when you skate into them, sending you flying across the map for some of the tightest platforming in the whole game. You don’t truly know how good OlliOlli World can feel until you’re grinding along a rail at Mach 10. 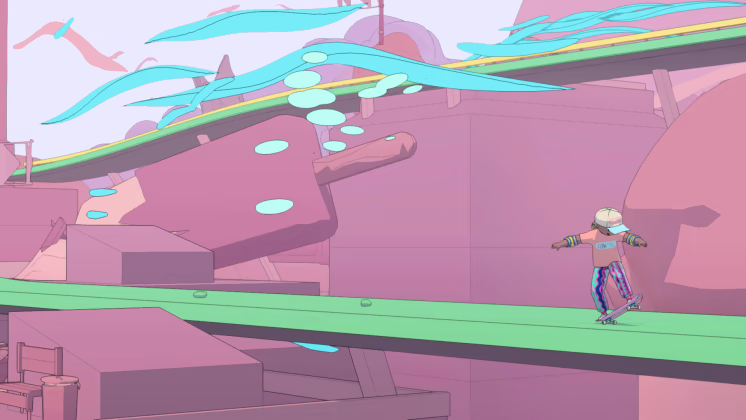 That’s just scratching the surface of what these Wind Zones introduce, as they can also swap which direction you’re going in, opening levels up and making getting around them much more like a puzzle than before. This was something OlliOlli World toyed around with a bit, but it feels like it’s finally reached its full potential here.

Combine these Wind Zones with all of the tricks the base game had to throw at you, and Finding the Flowzone often feels like the final test of everything you’ve learnt so far. I imagine most players can get through it fine, but there are some levels and challenges that feel like some of the hardest OlliOlli has ever thrown at you, especially if you’re going for every Radlantis map piece to unlock more levels.

Another great new introduction are ‘Burly Routes’, an evolution of the ‘Gnarly Routes’ from the main game. These even-more-hidden paths are much more challenging and require almost perfect platforming to get through them in one go, which you’ll need since they don’t have checkpoints. They’re some of the tensest moments I’ve had in OlliOlli World, but almost feel like a reward for the players who have stuck around for the whole journey. 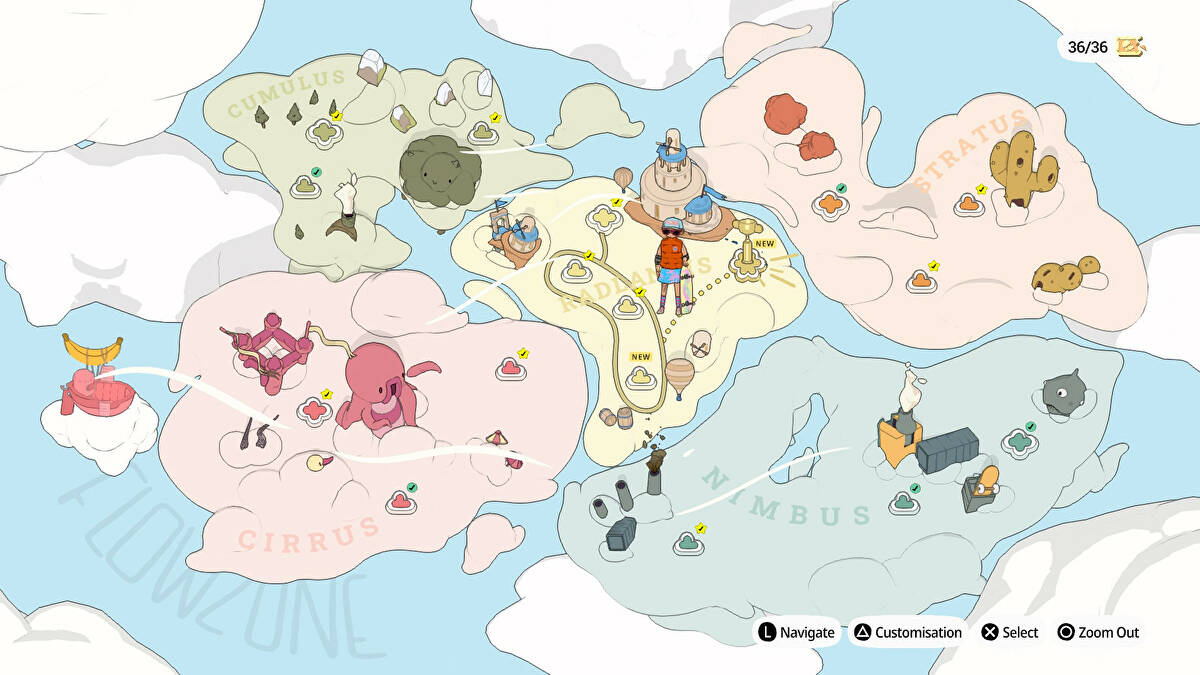 Speaking of rewards, Finding the Flowzone also adds some amazing new outfits to unlock, some themed around the whole sky pirate shebang, but most of which are just nice new skater clothes. It gives you even more of a reason to do all of the challenges, some being incredibly tough to figure out. Roll7 also added a pink varsity jacket and an aviator helmet, so it's clearly just trying to woo me at this point.

As I skated through the final level of Finding the Flowzone and saw all of the Skate Gods I’d run into throughout OlliOlli World, I couldn’t help feeling a little sad as the curtain was clearly preparing itself to close. OlliOlli World has been a comfort game for me throughout all of 2022, something I come back to when I’m stressed to just kickflip a bit and chain combos together. I’ve spent many hours across several platforms trying to get all of the challenges, or just going through levels for fun, so it’s a shame to see something that’s meant so much to me coming to an end.

I can’t be too upset, though, as Finding the Flowzone is OlliOlli World at its absolute peak, something I thought it had already hit way back in March. If this is the end of OlliOlli World, at least it went out like it lived – radically.