Peglin is a game built around randomness. The game's Steam description cites the roguelike Slay the Spire as one of its main inspirations – in both games, your success in combat is dictated by your ability to create a "deck" out of a random selection of items. These items are cards in Slay the Spire, and orbs in Peglin. To fend off hordes of enemies, you drop these orbs onto "pegs" in the style of a Pachinko arcade machine, a game where randomness plays such a big role that it's often considered gambling.

You can control some of Peglin's randomness through Relics, upgrades that stay with you until you die. In typical roguelike fashion, you often have to choose between several Relics, so knowing which ones are worth taking is key to winning the game. 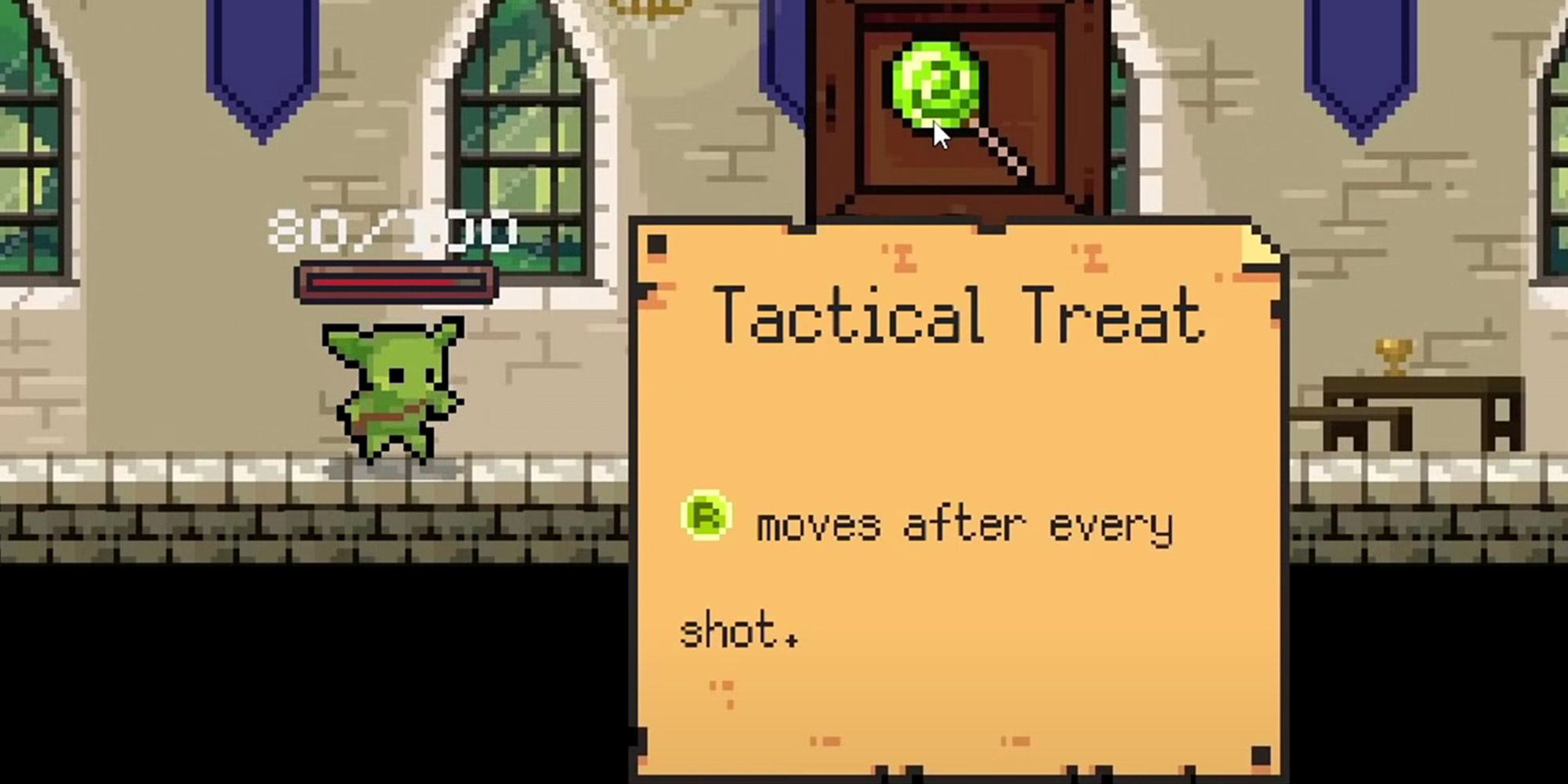 Some levels have pegs that are in nearly inaccessible places. This may be because some of the level's pegs have Durable, meaning they have to be hit three times before they disappear. Or maybe there are just so many pegs in the level that it's impossible to get through them all. This sounds good at first, but it becomes a problem when the inaccessible pegs are Refresh pegs, which make all the pegs you've hit in the level reappear, so you can hit them again.

The Tactical Treat is your easiest solution to this problem. Every turn, your Refresh pegs move to different places in the level. Although you don't have control over the new position of the Refresh pegs, they're much more likely to be in an advantageous spot. 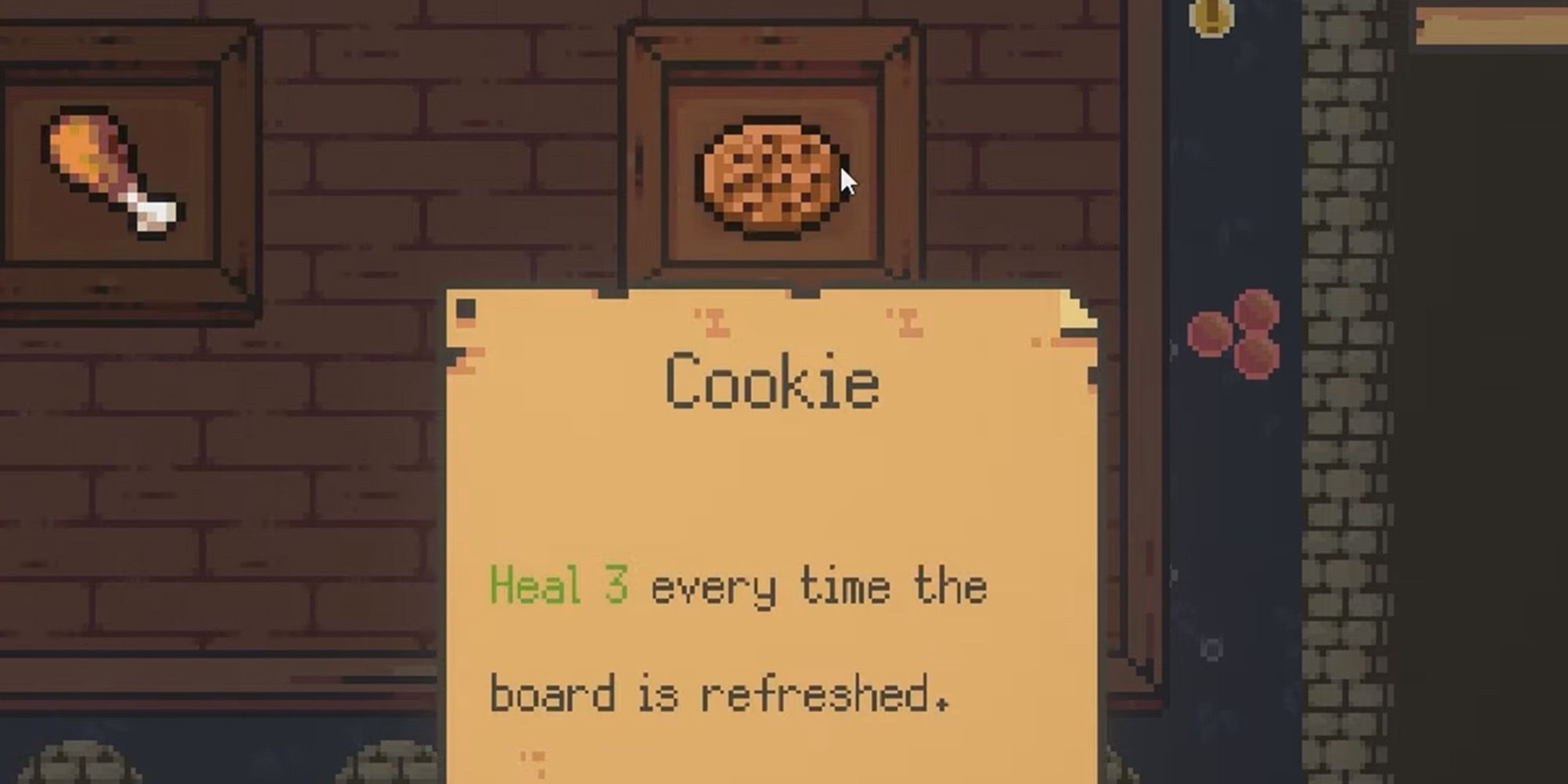 One of the toughest choices you can make in Peglin is whether to heal or get an upgrade at the end of a level. You'll take more damage as you progress, so healing will start being a lot more tempting, but this will only make you weaker in the long term. Because there aren't many healing alternatives, you often have to sacrifice the upgrade anyway to avoid dying.

This is where the Cookie Relic shows its true potential: every time you hit a Refresh peg, you heal three health. Since you almost always stay at 100 max health throughout the game, this Relic doesn't lose its power the further you get, so it's an easy choice. 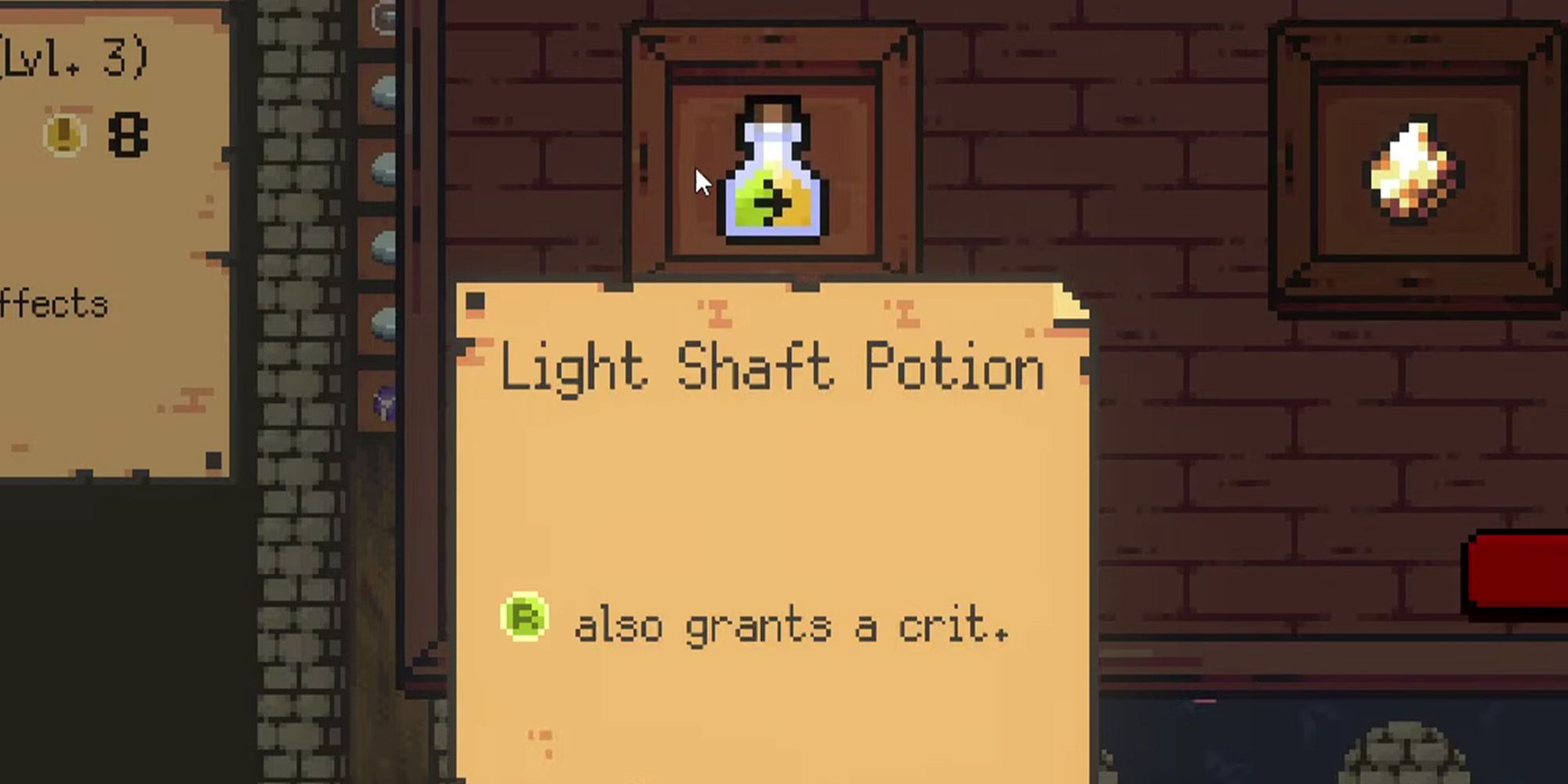 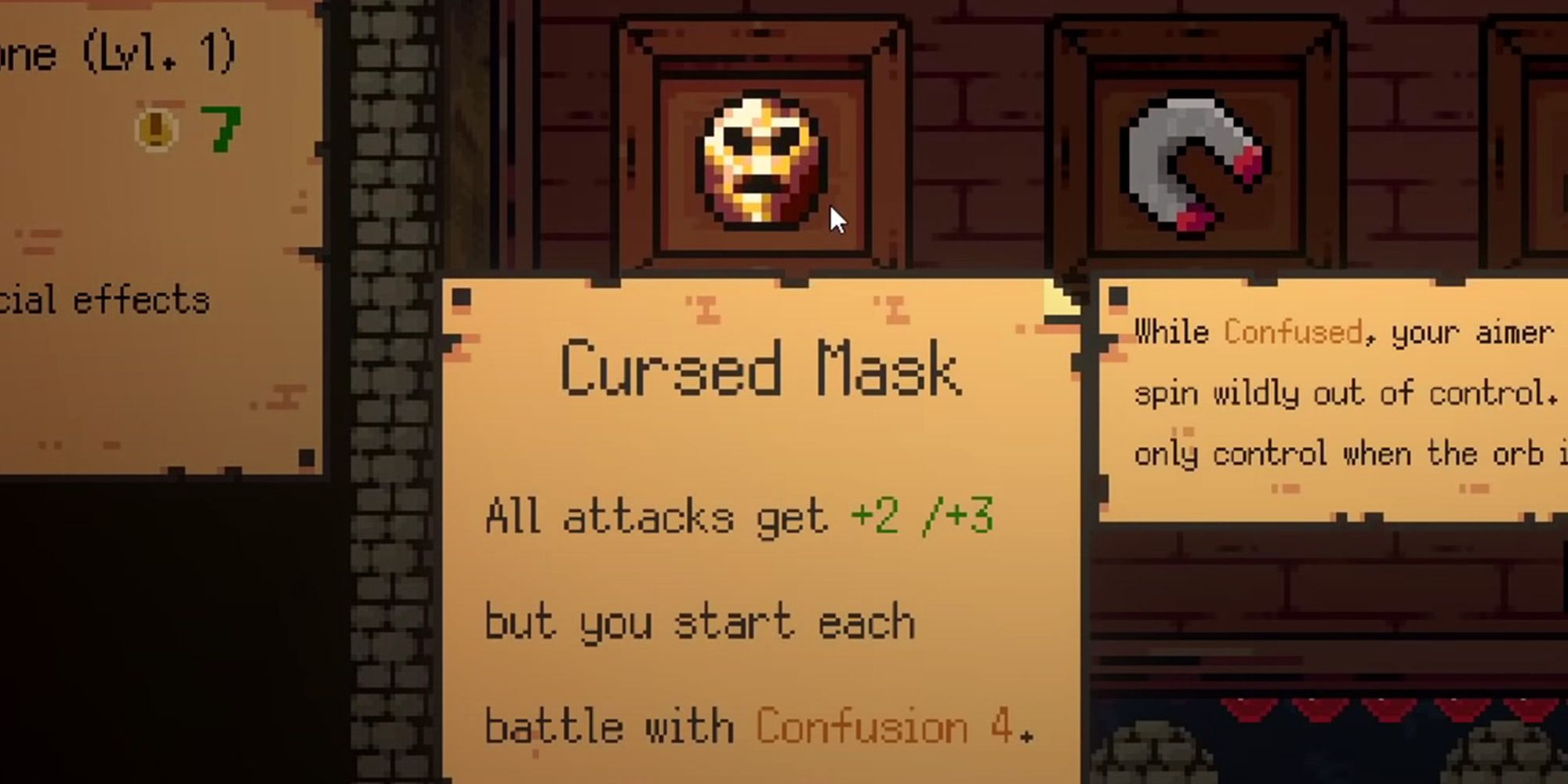 Like some cursed items in other roguelike games, the Cursed Mask gives you a huge benefit in exchange for a huge disadvantage. It permanently gives all your orbs a high damage increase, but it also applies the Confusion status effect for the first four orbs you shoot in every combat. When you're afflicted with Confusion, you can't aim your orbs – you're instead forced to shoot your orb while the aimer spins rapidly. 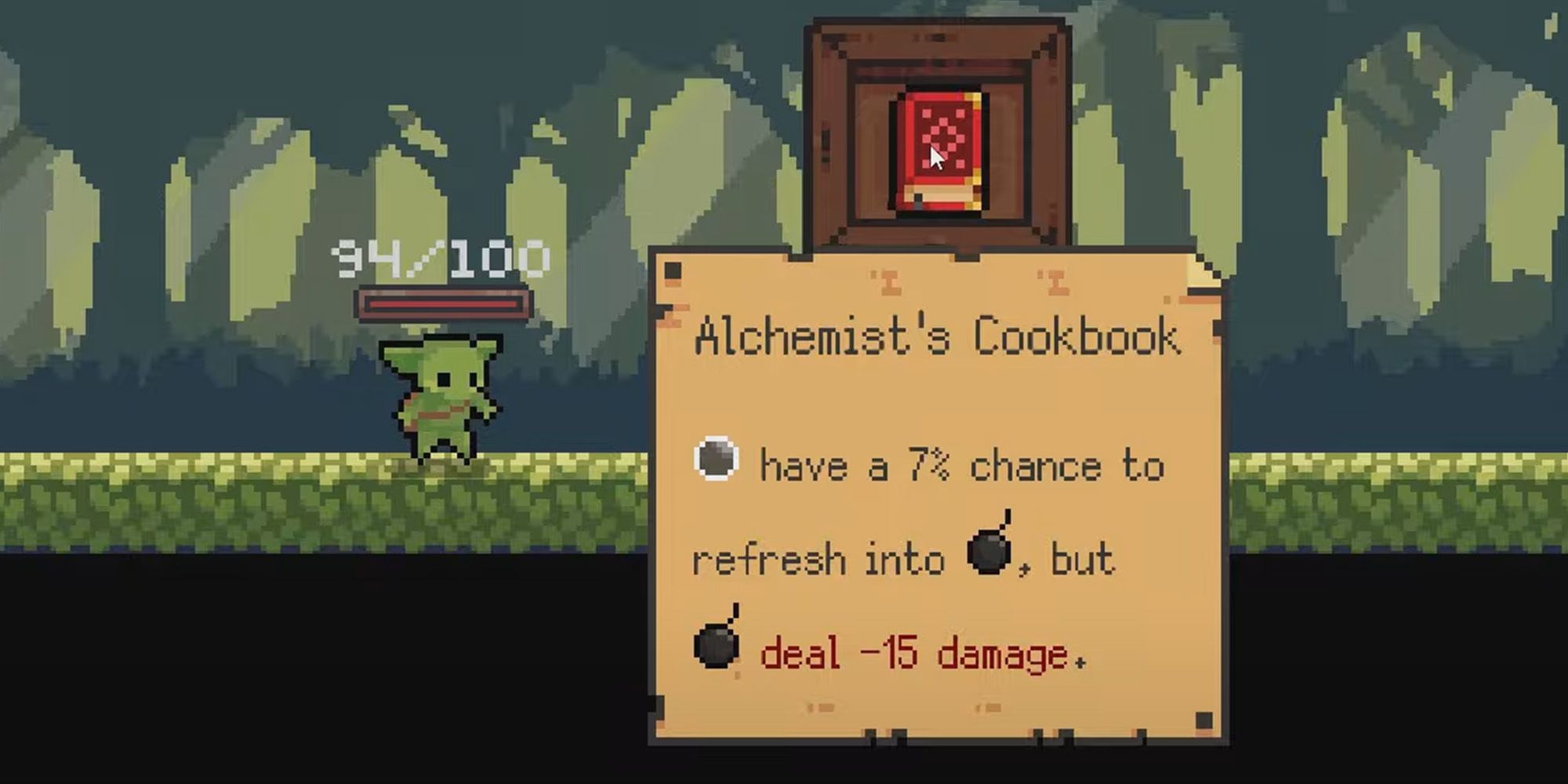 Enemies rush at you in a straight line in Peglin. Even though you're able to select any enemy as a target, usually you'll only deal damage to the enemy at the front of the line (unless you have orbs that pierce enemies, which is uncommon). Special pegs called Bombs will deal damage to all enemies, but you start each combat with a limited amount of Bomb pegs, so they're not super reliable.

This is where the Alchemist's Cookbook comes in handy. The Relic reduces your Bomb damage, but pegs have a seven percent chance to be replaced with a Bomb when you Refresh them, turning Bombs into a naturally replenishing resource. Who knew alchemists could make explosives? What other secrets are they hiding? 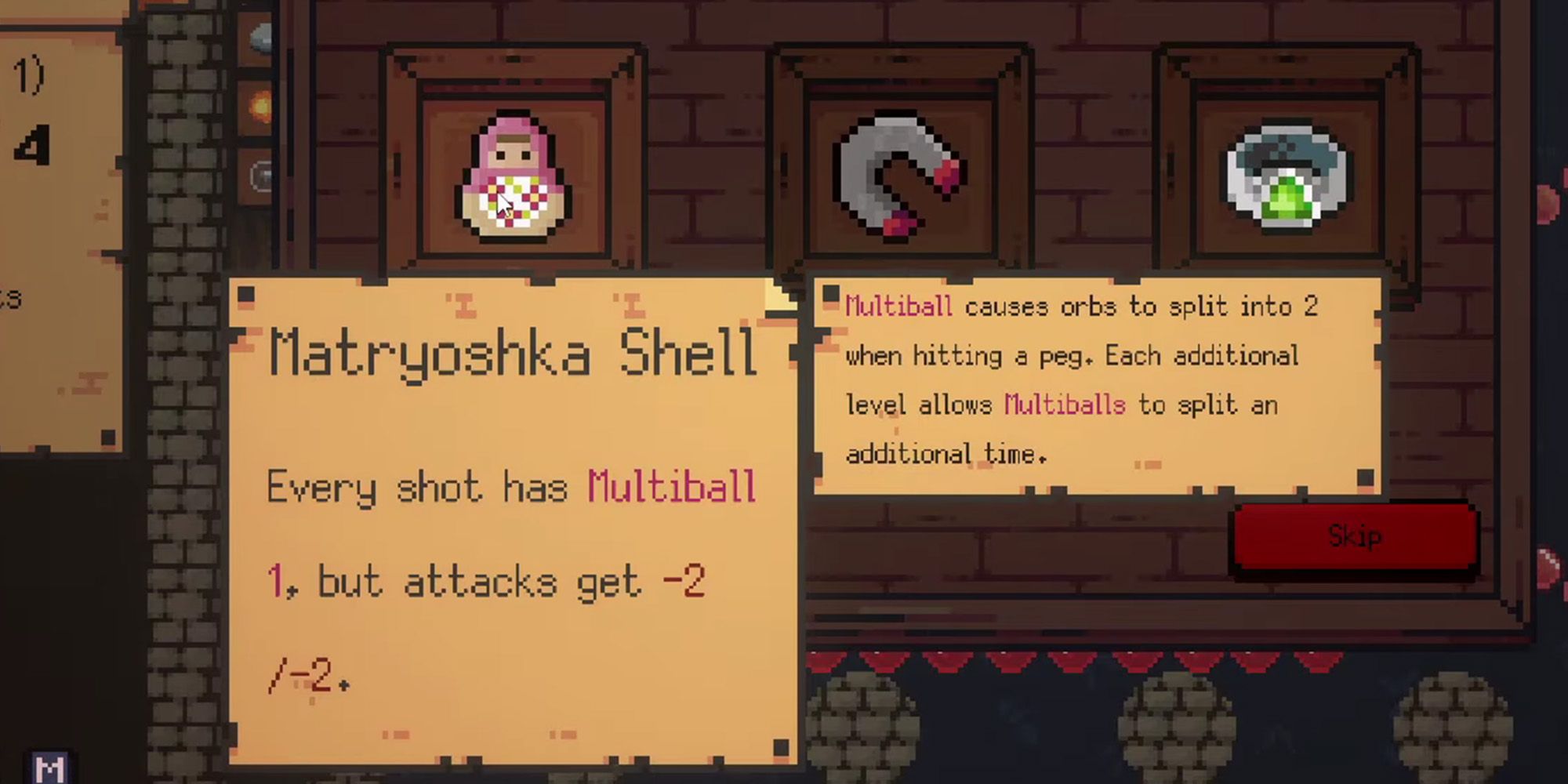 Hitting more pegs means dealing more damage, and no Relic is a better example of this than Matryoshka Shell. Getting this Relic gives all your orbs the Multiball modifier, which splits them into two the first time they hit a peg.

But the Matryoshka Shell comes at a big price: all your orbs deal less damage for each peg they hit. Because of this downgrade, it's best to take this Relic after you've already upgraded a few of your orbs, or if your orbs deal a lot of damage by default. If you've moved on from relying on your starting Stone orbs, overcoming the damage penalty shouldn't be much of a problem. 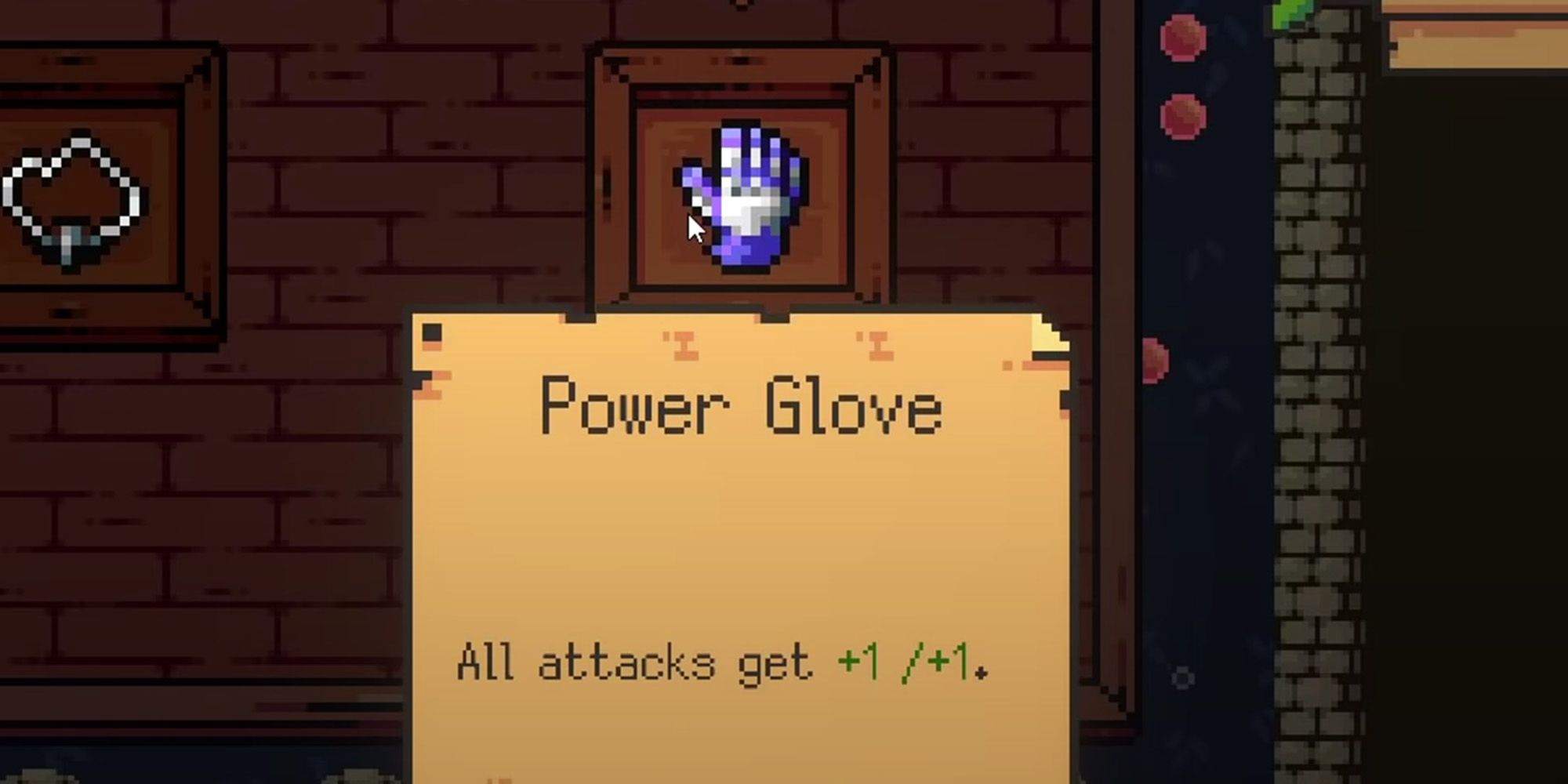 Power Glove, a reference to the failed 1990s Nintendo product, gives all your orbs one extra default damage and one extra critical damage. This Relic, though simple, has two uses: it makes you consistently deal more damage, and it makes taking Relics like Matryoshka Shell or Cursed Mask much more reasonable. 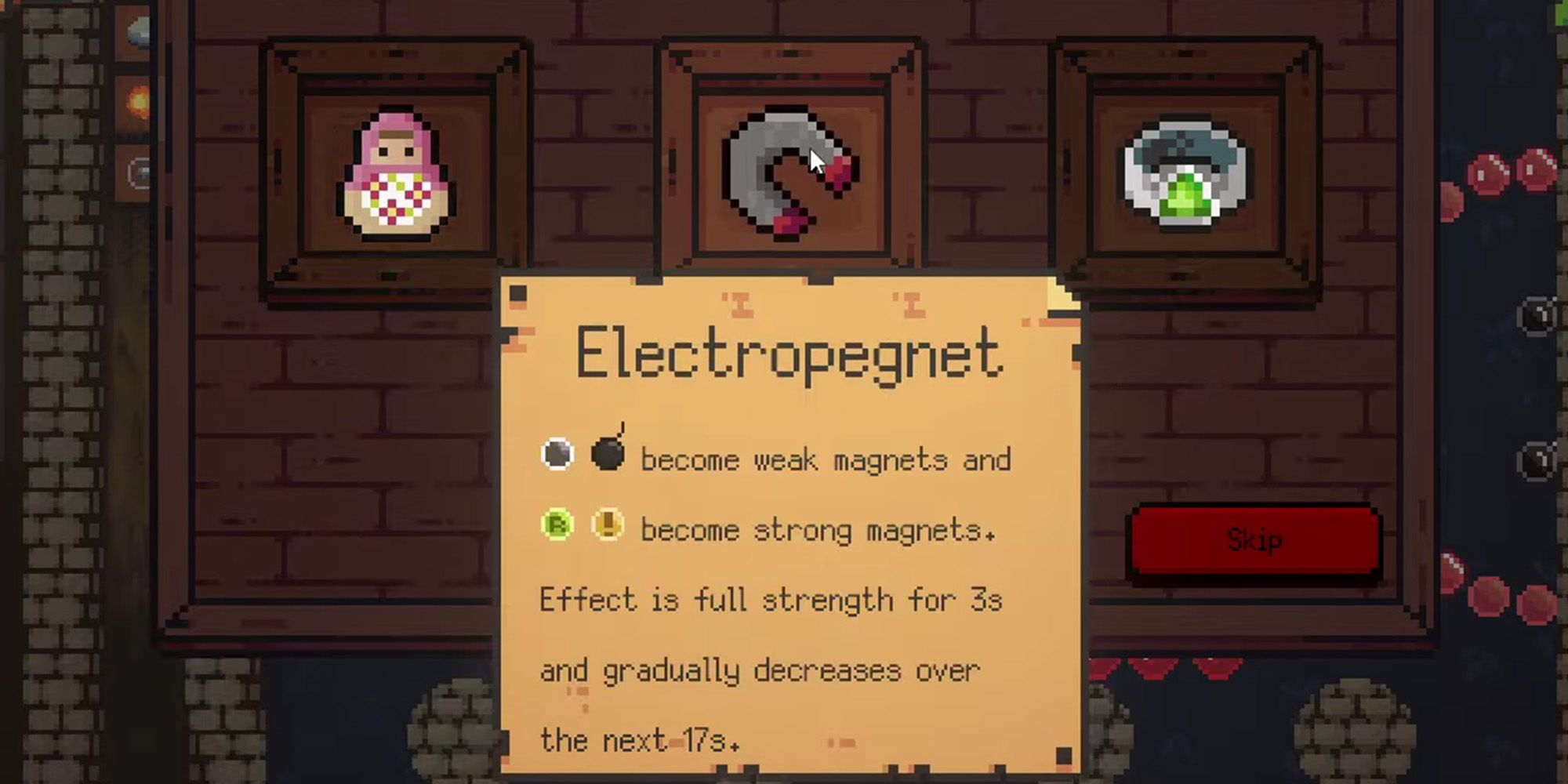 The unfortunate truth is that sometimes your orbs won't hit nearly enough pegs. You may get an unlucky bounce that sends your orb flying away from any pegs, or there may not be enough for you to hit in the first place. Regardless of the cause, pegs are your main source of damage, so this can become troublesome.

The best solution to this problem is the Electropegnet. With this Relic, your orbs will be weakly pulled towards normal and Bomb pegs, and strongly pulled towards Critical and Refresh pegs. This effect only lasts for a few seconds, which means you don't have to worry about your orbs getting stuck. Science rules! 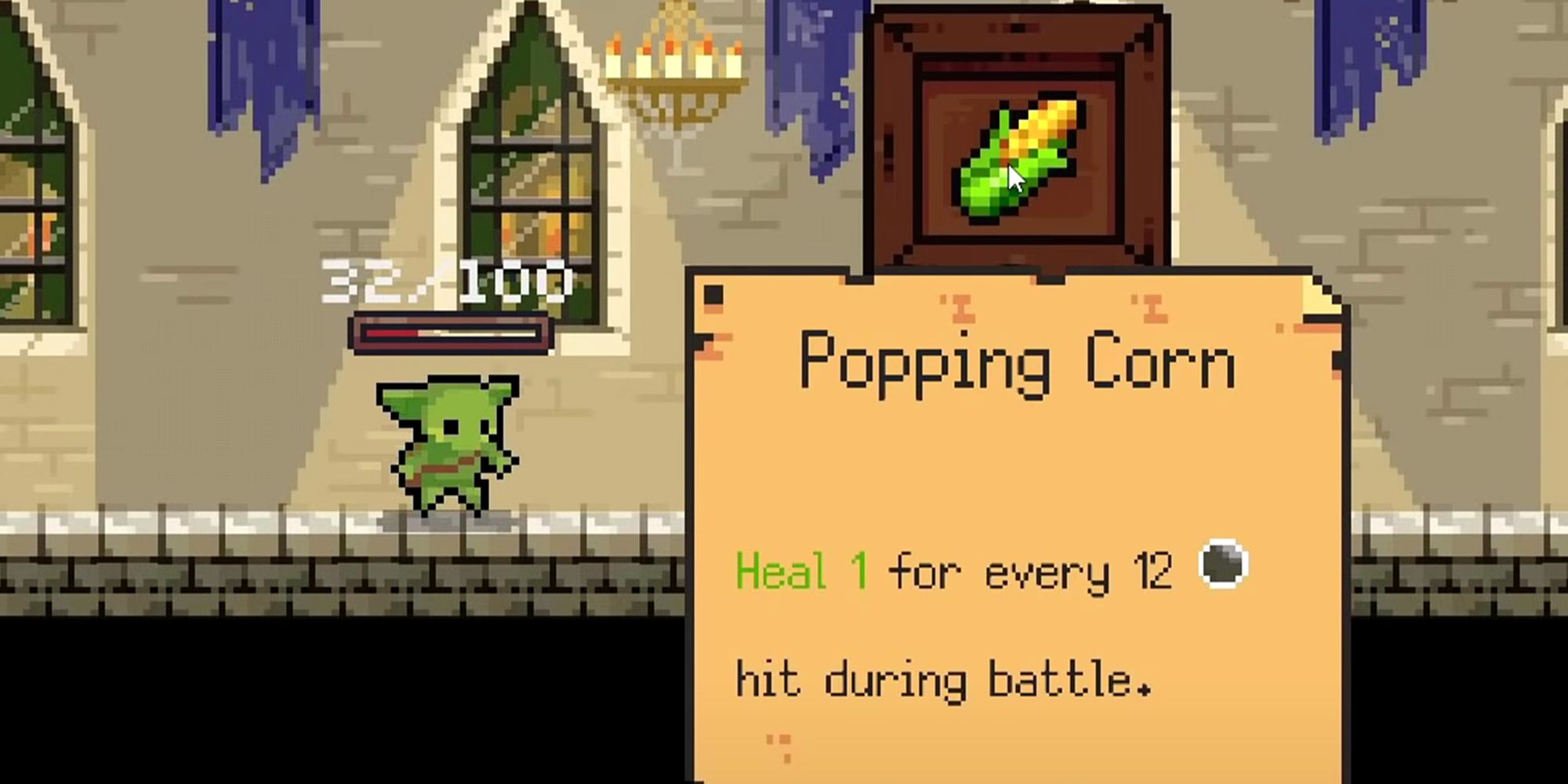 Sit back, relax, and grab a bowl of popcorn while you watch your orbs bounce around the screen, because Popping Corn is another viable healing option. With Popping Corn, every time you hit 12 pegs, you heal one health.

Though this doesn't seem like it does as much as Cookie, the number of pegs you hit (and consequently the amount health you regain) starts to increase dramatically once you reach later areas. This Relic is also more powerful because Refresh pegs are a lot more finite than regular pegs. 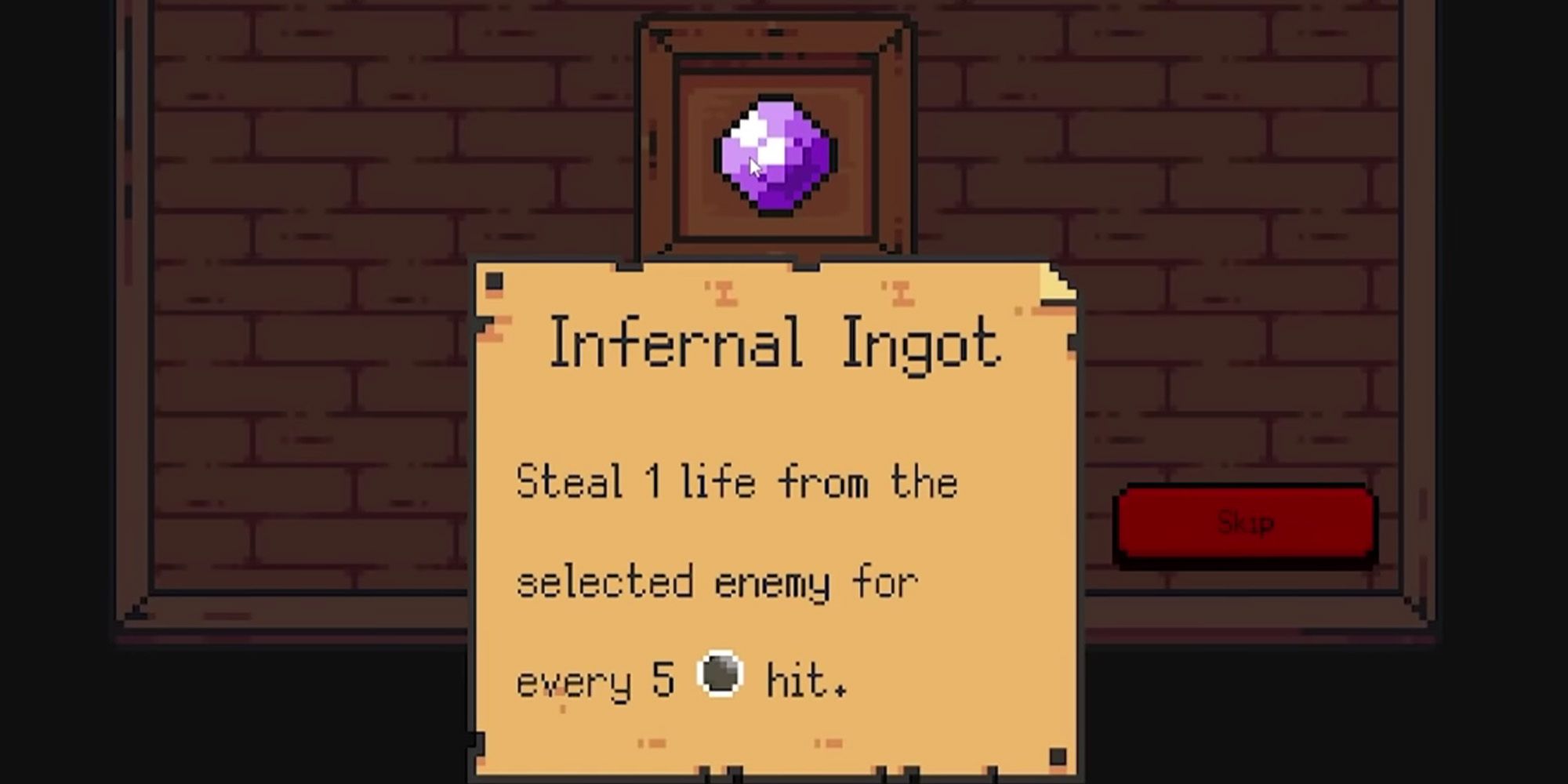 Even though Infernal Ingot is one of the best Relics in the game, it's rare and risky to get. Instead of finding it after a mini-boss or in a chest like usual, this Relic can only be found by traveling to Event spaces on the map. There are many dangerous or harmful Events you can encounter, so tread carefully! It may not always be worth the risk.