During the Summer Game Fest Play Days event in Los Angeles last weekend, I got a quick look at Niantic’s new AR-powered mobile game, Peridot. While at first it may look like Niantic’s attempt to create its own version of Pokemon, Peridot is actually a lot closer to a pet simulator like Nintendogs or Tamagotchi. Ironically, Peridot’s core gameplay loop involves raising and breeding creatures – a feature that the core Pokemon series is known for, but hasn’t yet made its way into Pokemon Go. While my hands-on time was brief, I was impressed by the augmented reality features, which far exceed the interactions that are possible in Pokemon Go today.

The Peridots, called Dots, are outrageously cute. Their giant Beanie Baby eyes and amorphous squish mallow bodies give even the most adorable Pokemon a run for their money. I’m almost disgusted by how precious these things are, and I wouldn’t be surprised to see a massive merchandising push once the game goes live, considering how much variety there is to the kinds of Dots you can create.

Unlike Pokemon, Peridot doesn’t feature a collection of bespoke, hand-made creatures to collect. Instead, each Dot has a certain number of physical characteristics that will reveal themselves as the creature matures. You can kind of think of Dots like Chaos from the Sonic Adventure series, both in terms of their physical features and the way you pass those features down through breeding. Some features are more rare or unique than others, and finding those characteristics to breed into your Dots is a huge part of the game’s social and fitness angles. Niantic specifically mentioned a unicorn horn as one example of a rare characteristic that players may want their Dots to acquire through breeding, either with other players’ Dots or with Dots found in the wild.

Here’s what the general life-cycle of a dot looks like. After hatching, you’ll need to raise your Dot to maturity before it can breed. You’ll have a checklist of objectives to complete with your Dot, like feeding it, playing fetch, and taking it for walks. Once it matures, it’s time to look for a mate. You will then start over by hatching a new Dot, while your previous Dot is released to the wild so that nearby players have the opportunity to breed with it as well. Niantic says that even though you have to let go of your Dot to raise a new one, you can always call back your past Dots for a visit if you miss them.

Peridot is played entirely in AR, so you can always see your magical pet running around on the floor or floating in the air if they have that ability. Unlike the AR mode in Pokemon Go, Peridot brings creatures to life in a really impressive way. Not only can they do they run around on the actual floor, but they can also navigate around obstacles to some degree. I was playing in a crowded restaurant and my Dot ran around my feet and out into open areas, avoiding tables and chairs. At one point it ran into a potted plant, but the game recognized the collision and represented it with a dotted silhouette that created the illusion the creature was actually behind the plant. I’m excited to see how the Dots behave in different environments and spaces because what I’ve see so far already leagues ahead of anything we’ve seen in Pokemon Go. 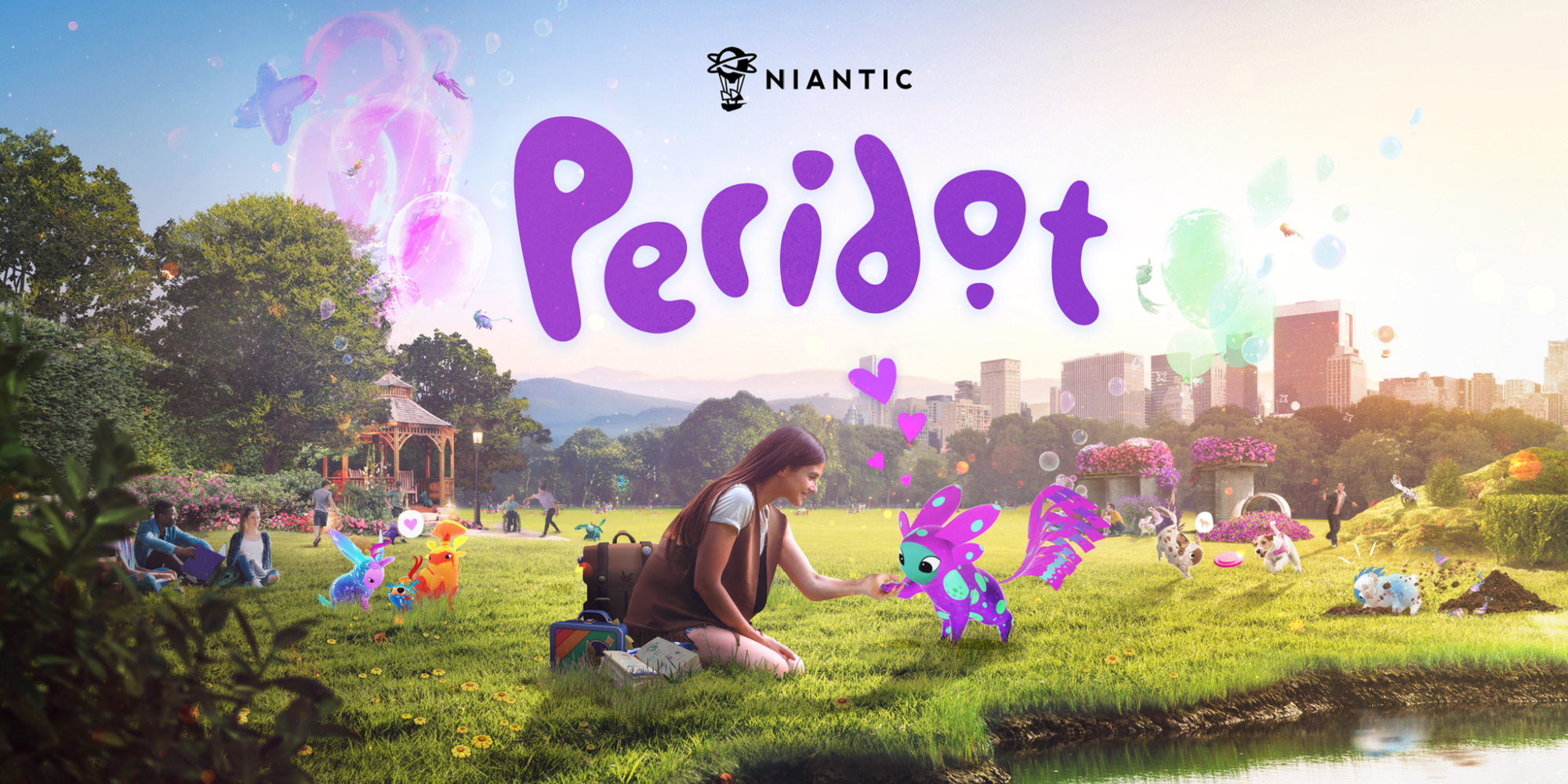 Farming items like food and toys is a big part of Peridot, but instead of spinning PokeStops, your Dot finds the items for you. When you draw a circle with your finger, your Dot will dig up some items at that location. The game is able to distinguish different kinds of surfaces with a remarkable degree of accuracy. When I drew a circle around the aforementioned potted plant, the game recognized it as a vegetation, and my Dot jumped into it and returned with items specific to that surface. Dots can also search for items in water, like lakes and oceans, and while I didn’t take the phone into the bathroom per Niantic’s request, I’m told that under the right conditions you may be able to send your Dot into the toilet to look for treasure.

Feeding your Dot and playing fetch with it are also impressive in AR, but at this point in the demo I started to notice that the Pixel 5 I was using was starting to overheat. Without a case on, it was almost too hot to hold comfortably. Peridot is meant to be played entirely in AR, and it seems like it’s going to drain batteries like nobody’s business. Niantic admits that this is still something it’s working to overcome. I’m told that the game runs really well on iOS devices right now, but optimizing performance for a wide range of Android devices is still a work in progress, with Samsung and Pixel devices being the priority.

Performance concerns aside, I’m delighted to see what a bold departure from Pokemon Go Peridot has turned out to be, and I can already see myself opting for it during some of the slower seasons in Pokemon Go. Niantic has landed on something really special with the Dots themselves, and the AR features feel incredibly advanced. If you, like me, have been obsessed with mythical animal husbandry since the Dreamcast days, Peridot is the game you’ve been waiting for.