One of the big draws of the Persona series is its cute, creepy and cool monster designs. In each game some fan favorites return and new personas are added. Mostly these are inspired by mythical or religious monsters, but the design team don’t just riff on the standard depictions.

They stretch the idea far beyond what was originally imagined. For instance, Eros, the god of love, is no longer just a winged-man with a bow but also a glam-rock star crossed with a sheep. So just because you know the original, doesn’t mean you’ll be able to predict what the persona design will be. These are some of our favourites. 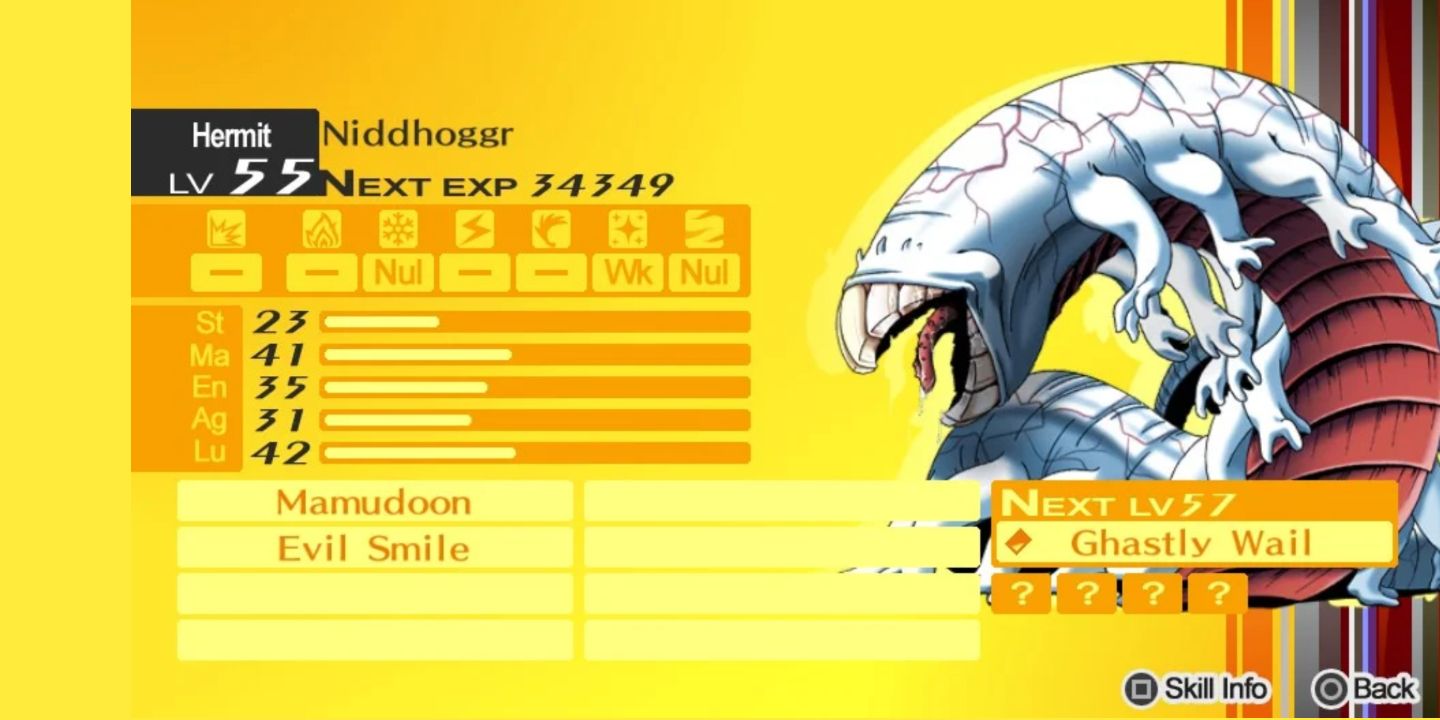 In Norse Myth, the Nidhoggr is a villainous dragon or serpent who gnaws at one of the three roots of the world tree. So, based on this, the Nidhoggr usually looks like the gruesome dragon in the epic God of War boss fight. Yet Persona has taken a different approach.

Persona 4's Nidhoggr is closer to a worm with a centipede’s legs and the teeth of a horse. The design does make some sort of since, because after all, with teeth like those you can certainly believe it spends a lot of time chewing on roots. That said, sharper teeth would’ve been less unsettling somehow. 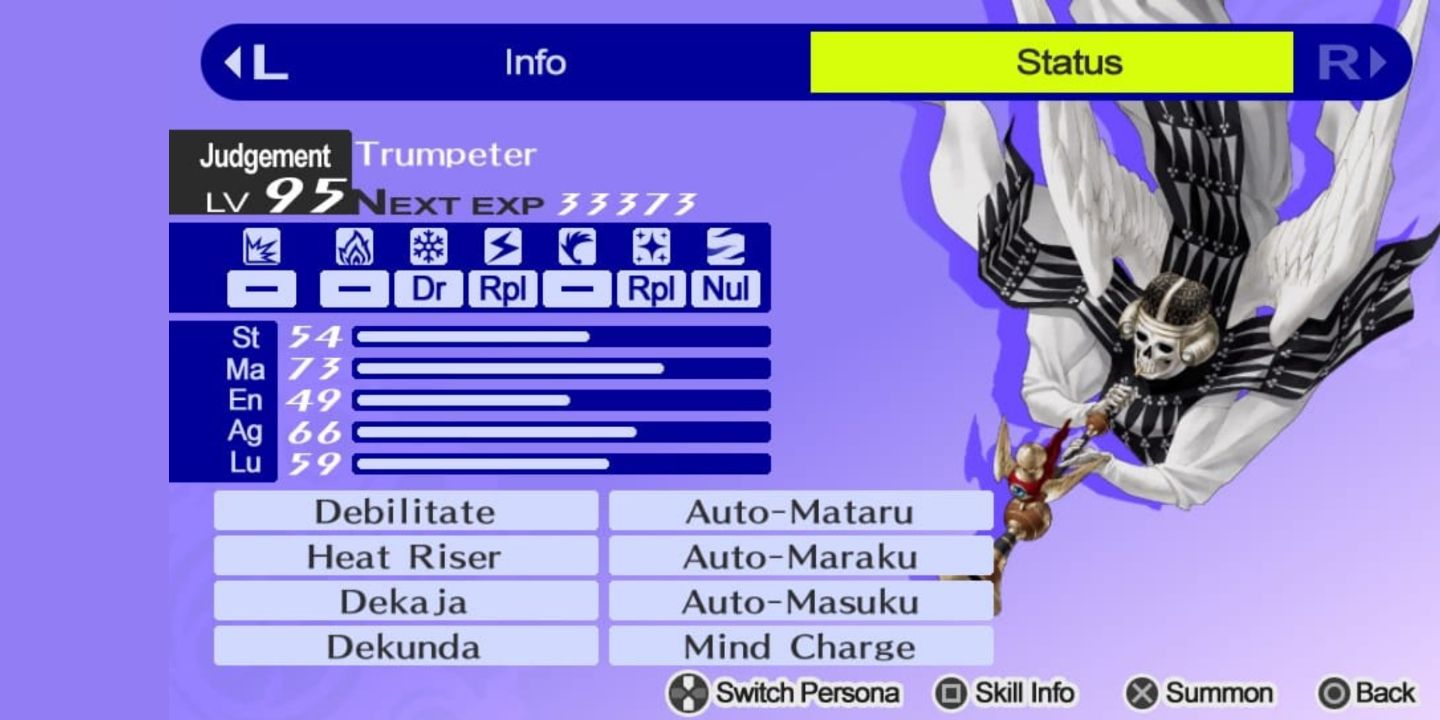 The idea of the trumpeter comes from the Book of Revelations, angels whose trumpets signal the end of the world. It’s certainly a grim job, so it makes sense that Persona’s Trumpeter looks something like the grim reaper. It always seems to be flying downward, from heaven it seems, to blow on its intricate eyed-trumpet and bring destruction.

Fittingly, the Trumpeter is one of the most difficult Personas to fuse, requiring six separate monsters. A Trumpeter with the skill Mind Charge is necessary to max out Margaret’s Social Link, which is worth keeping in mind before using hexagon fusion to make one. 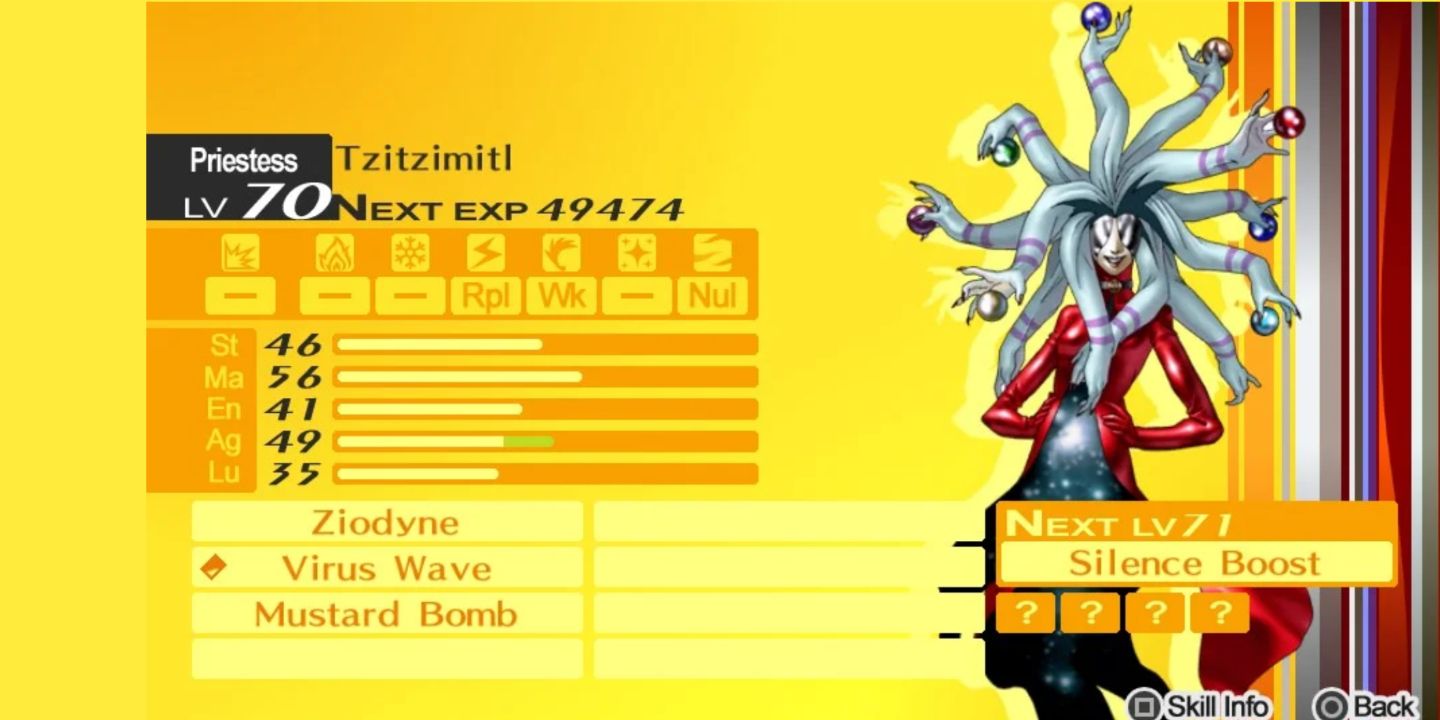 The Aztec deities of stars and fertility, the Tzitzmimeh protected femininity and created mankind. In a mid-16th century Aztec codex, a Tzitzimitl was drawn as a clawed-skeleton wearing an elaborate headdress and bearing a snake.

In Persona 4, the Tzitzimitl design is completely different but similarly elaborate, her headdress is made of arms grasping at stars and the cosmos flows from her dress. It’s a little surprising to see that Tzitzimitl is less creepy after her Persona make-over, but there’s no denying that it’s an inspired one. That said, her Persona 4 compendium entry ends with the eerie detail that she seeks a sacrifice every 52 years. 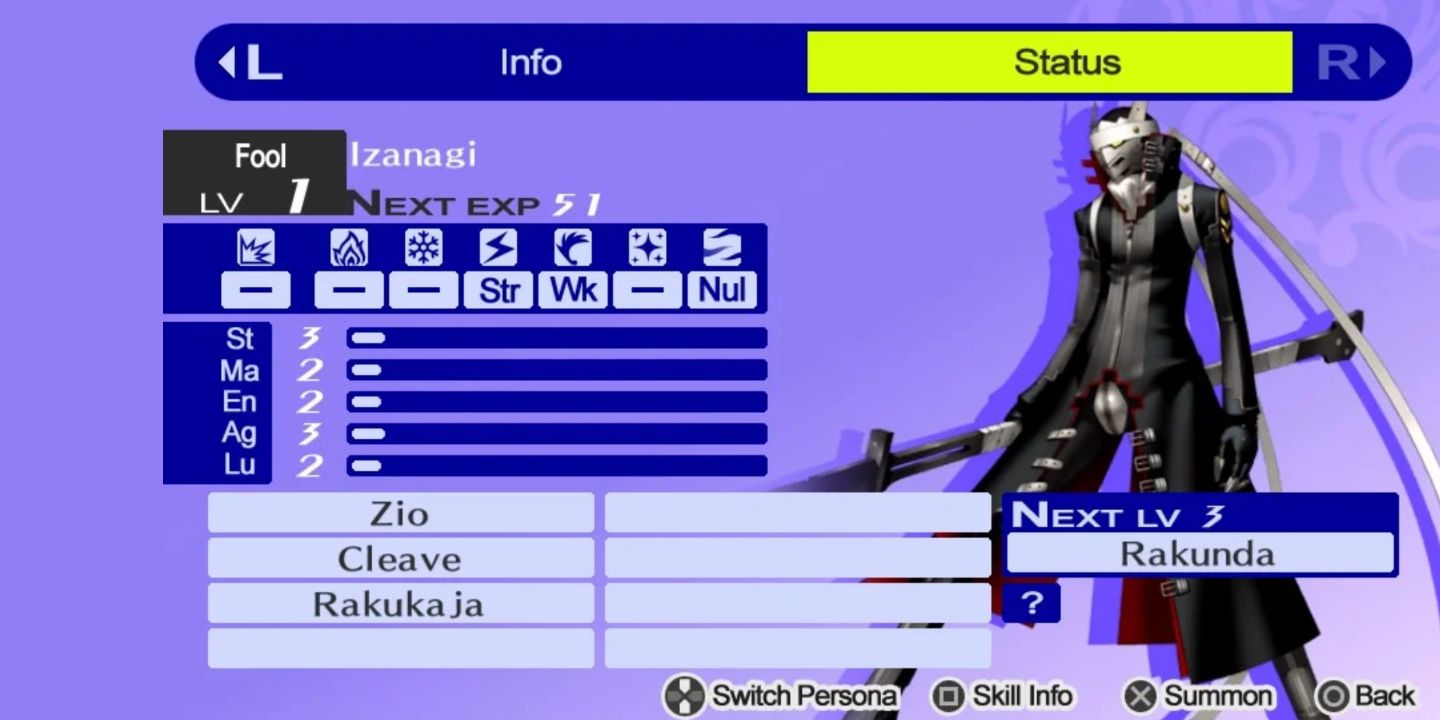 Izanagi is the great creation deity in Japanese mythology. He and his wife created many of Japan’s islands and lesser deities. Most often he has been depicted as a man in flowing robes but of course, that’s a little plain for the Persona series, so they’ve revamped him.

A metal knight in a trench coat welding a serrated spear. Persona 4 also has a couple of other forms for Izanagi: His red, demonic form, Magatsu-Izanagi, and his light form, Izanag-no-Okami. He’s a favorite with fans for his cool techwear style and the fact that he’s one of the series’ most powerful demons. 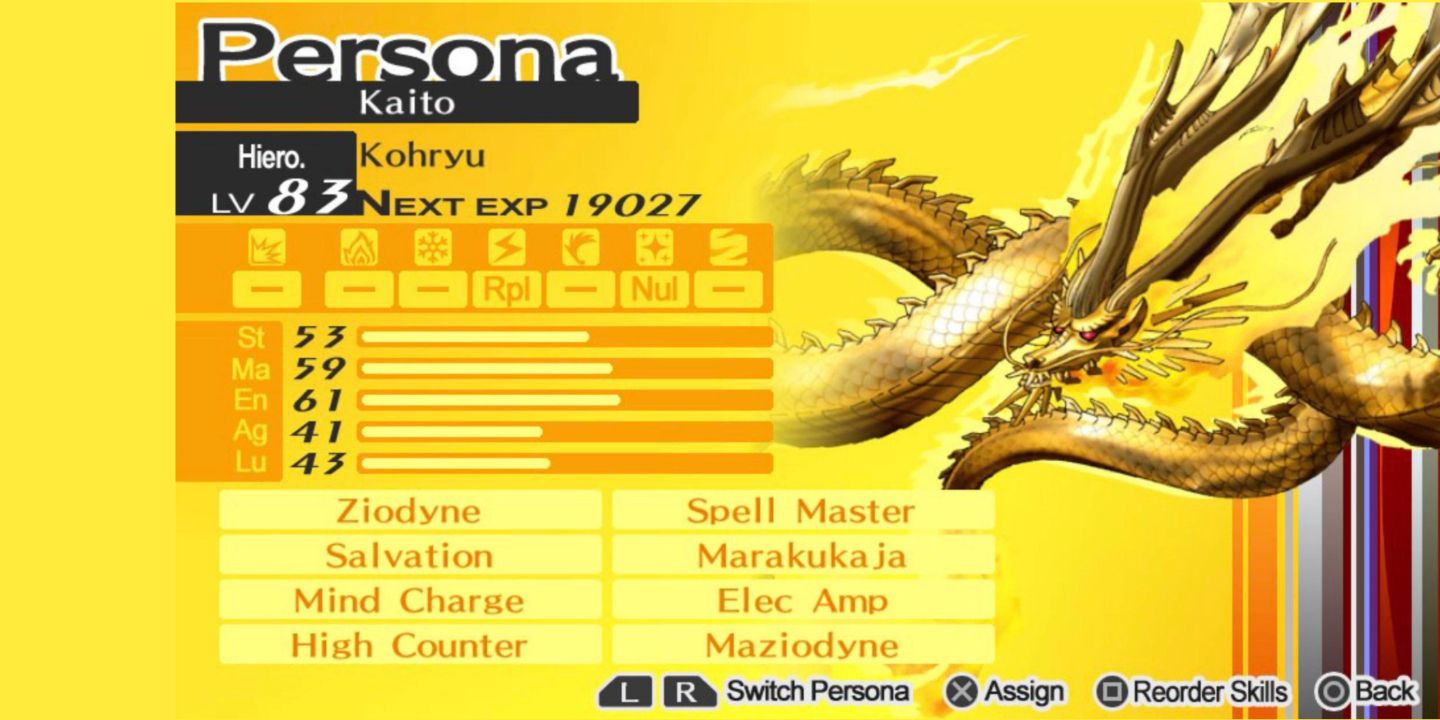 The Kohryu or Huanglong is the divine yellow dragon king and embodiment of the Chinese element of earth. Unlike many other Persona designs, Kohryu sticks pretty close to the original.

A majestic gold dragon accented by flames and antler-like horns. This classic horned and legged stake design is so iconic that maybe the design team just wanted a chance to draw it as is. In the game it’s given the respectable spot of the ultimate Persona of the Hierophant Arcana and requires a lot of heavy lifting to acquire. 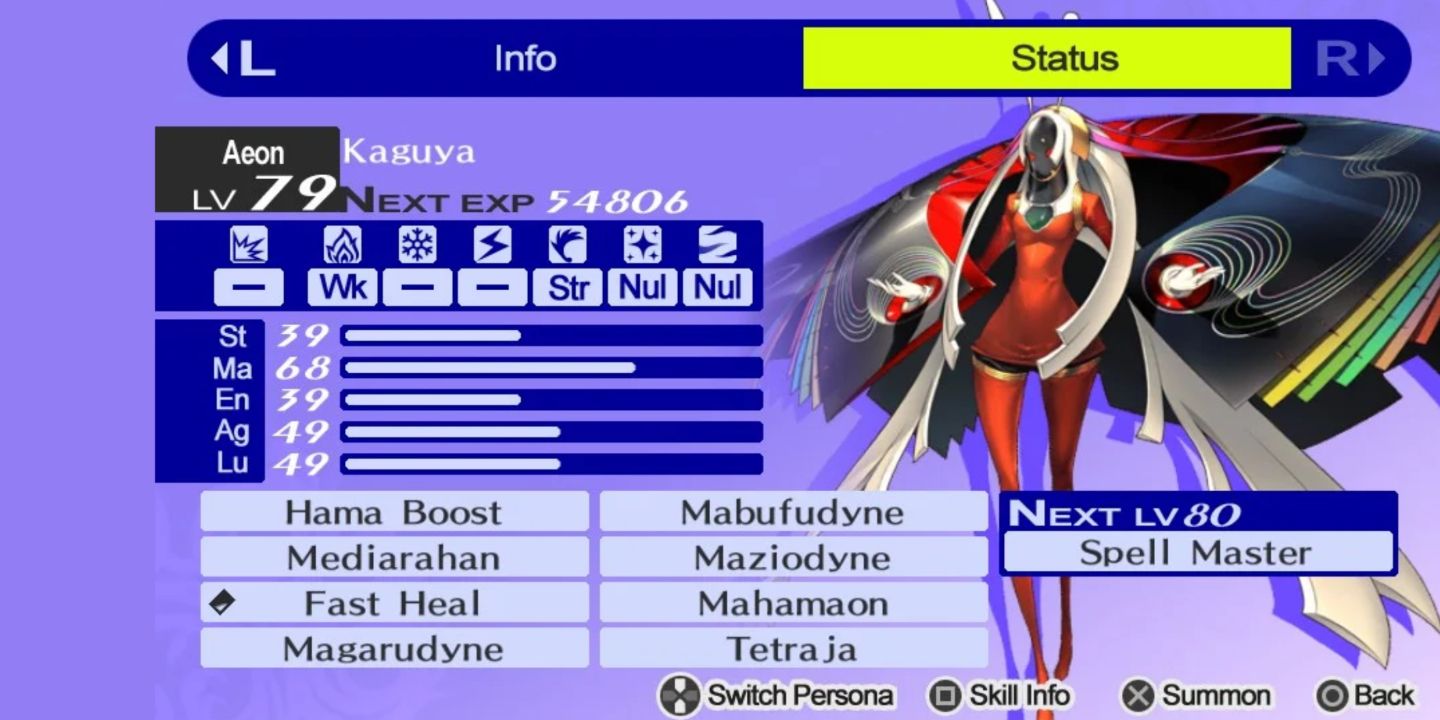 Persona’s first iteration of Princess Kaguya was a young girl sitting in a flying saucer. This is pretty in line with her origin in The Tale of the Bamboo Cutter, where she’s a princess from the moon. But Persona 4 Golden’s Kaguya is a bunny-eared robot with a floating coat of rainbow circuitry.

You can kind of feel the relation, with her coat looking like an abstraction of a princess’s kimono, but you’d certainly be hard-pressed to find someone who thinks “Princess Kaguya” when looking at this futuristic design. 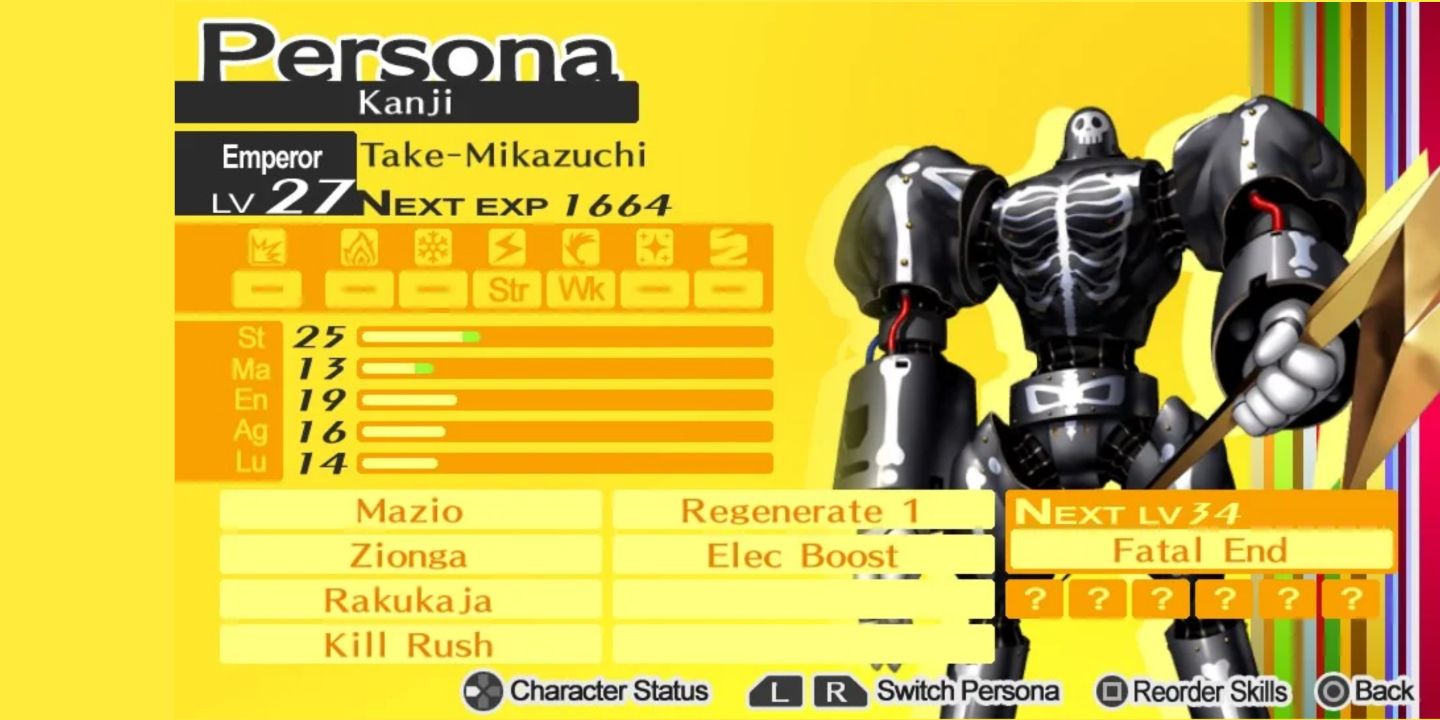 In the first Shin Megami Tensei game, Take-Mikazuchi is a bright-red colored boy wearing plain clothes and wielding a sword. In Shinto myth, Takemikazuchi was born of blood and of the creation God Izanagi. But in Persona 4 he is a Robotic knight with a skeleton decal and an enormous lightning-bolt-shaped sword.

Now the lightning bolt makes sense, because he is the god of thunder, but the rest is all straight from the imaginations of the Atlus design team. Few Persona designs are mechanical but for a thunder god to control an imposing battle-mech both makes sense and is completely ingenious. 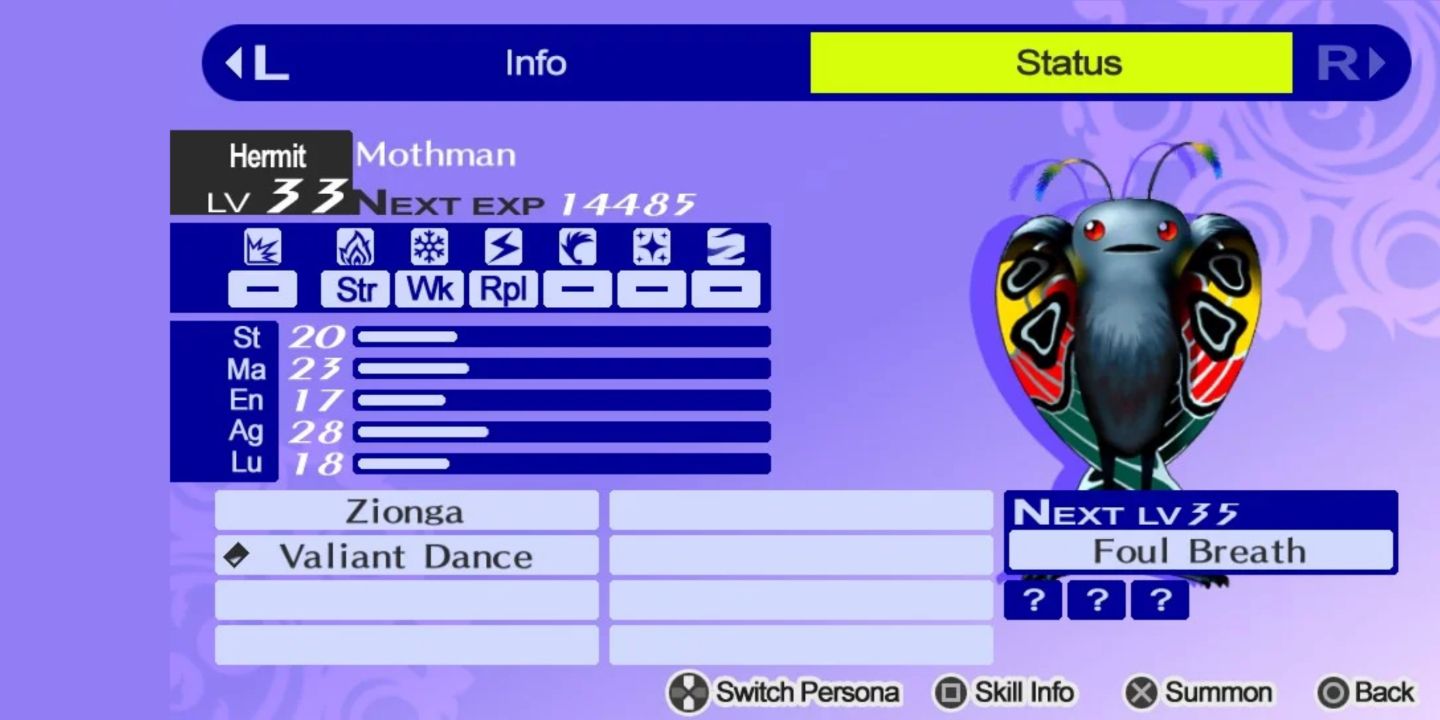 The Mothman is a mythical creature that was first described in mid-1960s America. A great and winged creature of the night with glowing red eyes was the general description. The popular theory is that they were only the eyes of sandhill cranes or barn owls glinting in the moonlight.

Mothman is often depicted as a looming almost-human presence; its eyes a terrible sight in the night. But Persona’s Mothman is not at all like that, it’s charming, unique and stands far apart from any other Mothman Design. Its blank red eyes and gaping mouth give off an awkward impression, and it’s a colorful character that kids would probably like to feed bread to.