While most of your social links in Persona 4 Golden involve hanging out with friends around Inaba and becoming closer to them, the Fox social link is a little different. Instead of helping the Fox with its own issues, you’re helping it to help other people with theirs.

But there’s an incentive to help it past just the kindness of your heart – the Fox will begin appearing as you go through P4G’s dungeons with the offer to heal your team a bit. If you’re looking for help with Persona 4 Golden’s Fox social link and ema requests, we’ve got you covered. 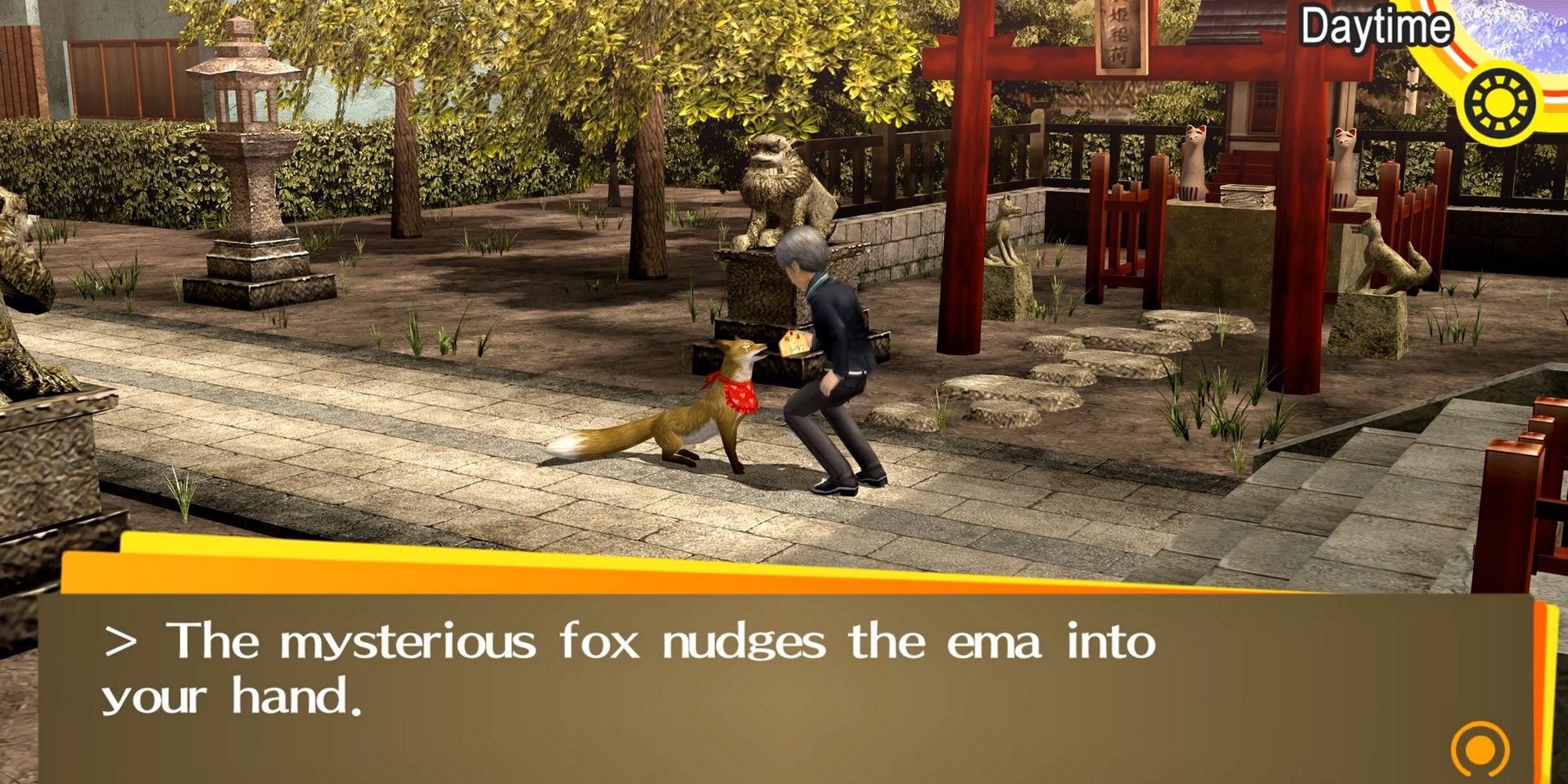 Thankfully, you don’t have to go looking for the Fox to begin its social link – this begins automatically with the story on 5/5. The Fox lives at Tatsuhime Shrine in the North Shopping District and is concerned with the lack of upkeep to the property.

In Shinto and Buddhist practices, ema are small wooden tags on which visitors to shrines can share their wishes and prayers to the gods. Limited in its power, the Fox entrusts Yu with helping it fulfill wishes left at the shrine.

The Fox covers your Hermit arcana, but unlike your human social links, the Fox is not impacted by having a Hermit Persona in your party.

Since you’re not gaining affinity with it in the traditional sense, unless you’re attached to a Hermit Persona, it’s an easy way to free up a space for another social link. 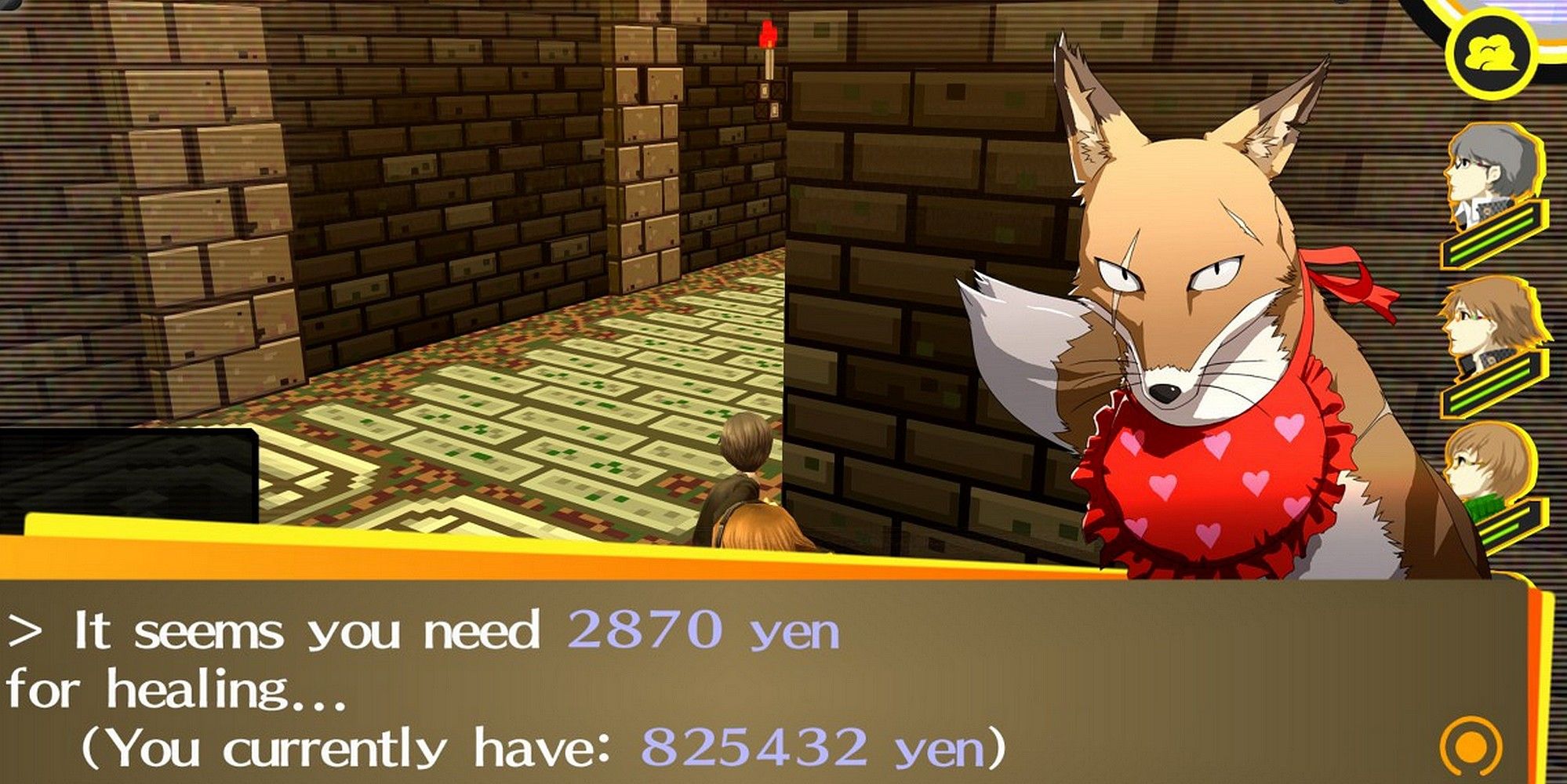 While the tasks you complete for the Fox might take some doing, it pays you back for your hard work by appearing in dungeons. It visits the Midnight Channel for sake of restoring your team’s SP without you needing to consume an item or leave the dungeon.

The bad news is that the Fox doesn’t work for free, but the good news is that it lowers its prices the friendlier you become. At first, your price for the Fox’s service will be a relatively staggering ¥60 per SP, but each social link rank will decrease the price by ¥5. At Rank 10 (Max) with the Fox, you’ll only be paying ¥15 per SP.

The most straightforward way to find the Fox during these dungeon-crawls is to use a Goho-M (unless you’re on the first or last floor) to return to the Midnight Channel’s lobby. The Fox will be waiting there for you, ready to replenish your SP.

Additionally, the Fox may spawn randomly inside of dungeons, especially if you’re revisiting a dungeon. You’ll occasionally see unused party members spawn in to give you items, and despite not being in your party, the Fox can appear here as well to offer its services.

How To Rank Up The Fox’s Social Link 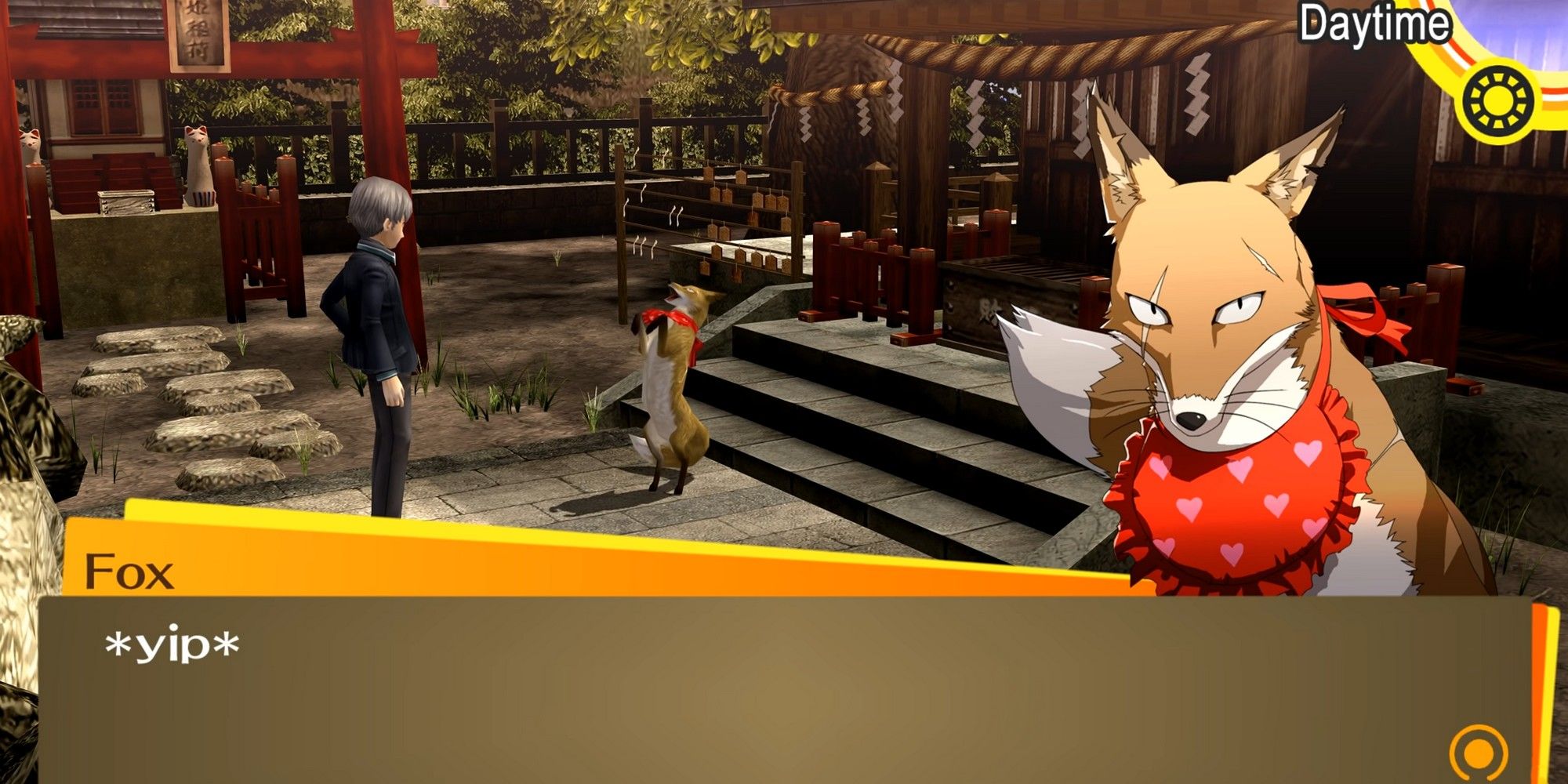 As mentioned above, you do not hang out with the Fox to advance your social link – this is done through completing the ema requests.

In order to begin your social link with the Fox, head to Tatsuhime Shrine and take one of the ema wishes. Your first ranking is automatic – it simply introduces you to the fox, ema wishes, and how the social link will function.

From Rank 2 forward, you’ll need to do things manually, but the game will tell you when the request is complete that you should visit the Fox. Once you’ve completed the wish, return to the Shrine to complete the rank.

Receiving a wish will not consume a time slot. Visiting the Fox again to complete the wish, however, does.

Go to Yasogami High and speak to the girl in the lobby by the shoe lockers on the first floor of the school. She's putting a note into your shoebox, but it's not meant for you. Speak to her again the following day (when she'll now be outside classroom 2-2) and select "I read it" when she asks about the letter.

After speaking to her about the note, speak to her again on a subsequent day to complete the request.

Speak to the woman standing in the road in South Shopping District after receiving this request. She asks for "a snack that doesn't taste like a snack," which you can get from Chie. She'll be on the roof of Yasogami High.

Chie will give you some Meat Gum. Go offer some to the woman, who is still in South Shopping District. 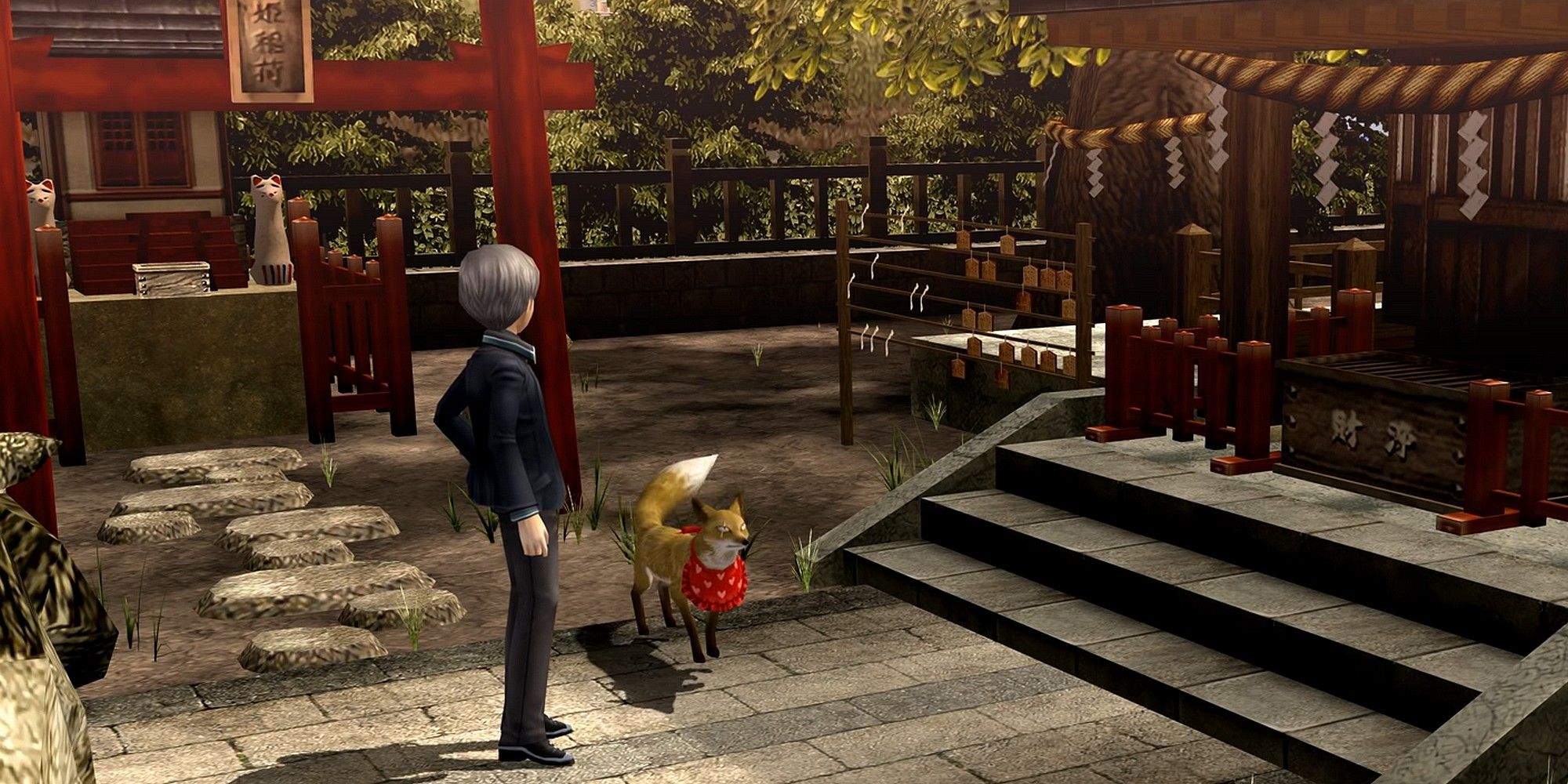 Instead of dealing with the people missing the dog, you'll be finding their dog for them yourself. Go to the Samegawa Flood Plain Riverbank after receiving the request and talk to the dog that's now appeared there.

The dog runs away on this day. You'll then see it just outside Tatsuhime Shrine the following afternoon. Choose "Talk to it gently," but still, it runs away again. After speaking to the dog, purchase a Beef Skewer from Souzai Dogaku.

Return to Samegawa Flood Plain again the following day. Speak to the dog, who is under the trees on the main path. Choose "Talk to it gently," until the game informs you the dog is wary. Offer it the Beef Skewer you bought, which gives it enough energy to return to its owners.

Head to Samegawa Flood Plain, where you'll see a boy standing by the sign along the walkway. Speak to him, and tell him, "I don't want your money" when prompted.

After this, you need to order something from Tanaka's Amazing Commodities on television on Sundays, and this item will arrive with a prize sticker. Go back to Samegawa Flood Plain and talk to him again.

You must return to the same location on a subsequent day to follow up with the boy. He's looking for a more child-like sticker, so go talk to Nanako at night, who will trade you for her Tankiriman Sticker.

Give this sticker to the boy, and then return another day to speak to him one final time.

Your deadline to obtain the sticker from Nanako via conversation is 11/3 due to story progression past this point.

However, if you're doing Rank 5 of the Fox's social link after this date, check the fridge – Nanako will have left a bag inside that contains the Tankiriman Sticker you need.

You'll find the man who made this wish in the North Shopping District, just next to Chinese Diner Aiya. When prompted, ask him, "Want me to make one?" He gives you the item Unfinished Model.

Each session of work on the model will raise your Diligence.

Once you've finished the third session and have MF-06S Brahman, return to North Shopping District and speak to the man again to give him the model.

On the roof of Yasogami High is a girl standing by the fence. Speak to her once your skills are of a high enough level, and she'll run away after a moment. Return the next day and speak to her again, selecting "Do you need help speaking?" first and then "Give her lessons."

The girl leaves again. Go back to the roof to speak to her again another day, and choose "Apologize to her" when prompted to complete the request. 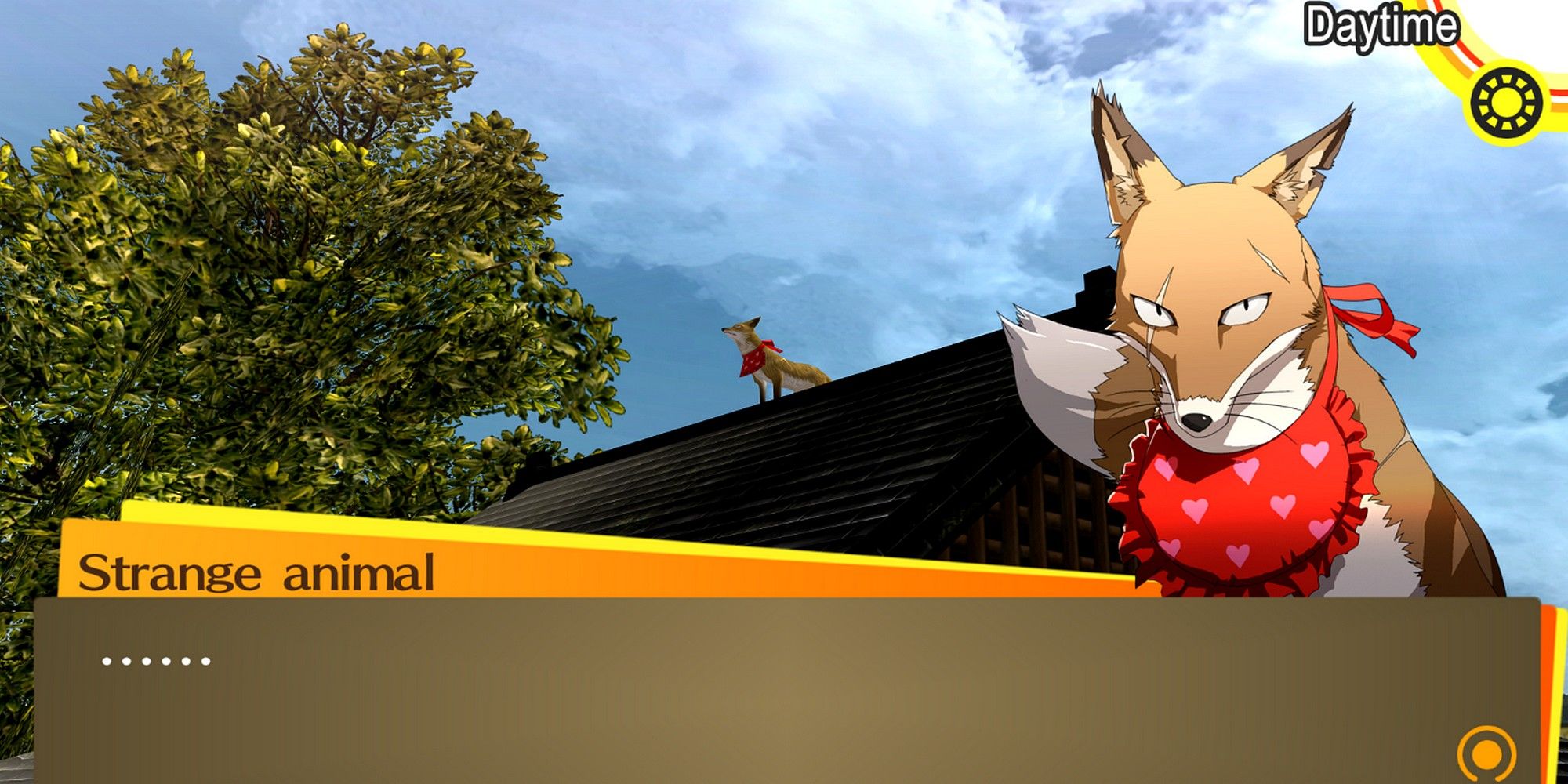 The first step to completing this request for the Fox is to finish the 'Please Feed The Cat' request. Once you've done this, go to the Samegawa Flood Plain and speak to the man standing by the trees along the path. When guessing the animal he's talking about, choose "Is it a cat?"

So long as you've finished the 'Please Feed The Cat' request, there will be an orange cat lying outside the Dojima Residence. Interact with the cat and choose "Let him see" when prompted. He'll come but will flee quickly.

Speak to him again at the Samegawa Flood Plain on a subsequent day to finish his request.

Go to the Samegawa Flood Plain and head toward the end of the path, where you'll see a woman digging in the trash. Speak to her to learn about her lost wallet, then go down to the Riverbank from the Flood Plain and examine the shrubs to the side of the stairs (underneath the date and time on your screen).

Go back up to the Flood Plain and speak to the woman again. It's not her wallet, so head to the North Shopping District and check in the bushes outside the shrine. Bring the wallet back to the woman.

Speak to the old man at the Samegawa Flood Plain Riverbank to begin this request after receiving it from the Fox. Ask him questions about the River Guardian.

After speaking to him about the request, you'll be able to catch Inaba Jewel Bugs at night while this request is active. Use them as bait to catch the River Guardian from the Samegawa River.

The River Guardian has a higher spawn rate in the rain.

Bring the River Guardian to the old man, and he'll give you the River Rod. After this, you can now catch Genji Beetle. If you're having a hard time finding it, you can purchase one from Tanaka's Amazing Commodities on 8/22.

Use the Genji Beetle as bait when fishing at Shichiri Beach, and bring the Sea Guardian back to show the old man once you've caught it.