Call me a nerd, but I love the Pokedex, and always have. Back when I was pouring my life and soul into Pokemon Silver, torch in my mouth to see my GameBoy Advance screen in the pitch blackness under my bed covers, I would check the Pokedex often. Firstly, it was the best way to see all your Pokemon’s cool sprites, rather than having to take a minute saving the game just to switch boxes in the PC, inevitably switching to the wrong one, taking another minute to save while you switched again, and eventually finding that Sudowoodo you wanted to look at for a minute.

But there was loads of other great information while you were there. The Pokemon’s height and weight were key for working out how fearsome they were, perfect for verbal top trumps on the playground to argue why your favourite ‘mon would beat up their favourite. Repeatedly spamming its cry was hours of fun. I’d even challenge myself to memorise different cries and then run into long grass with my eyes closed. I’d rarely recognise the Pokemon I encountered, but it was enjoyable all the same. Listen, we didn’t have smartphones or TikTok back then, you had to make your own fun.

The Pokedex was also integral for catching the roaming Legendaries. I caught Suicune by repeatedly flying to New Bark Town, checking the ‘dex, seeing Suicune was on Route 42, flying to New Bark again, checking the ‘dex again, Route 34, rinse and repeat until it spawned on Route 29. Go and encounter it, throw a ball, inevitably fail, fly back to New Bark and try all over again. I didn’t know about Mean Look back then, so don’t flood my DMs berating a six-year-old’s decisions.

Nowadays I’m allowed to stay up late – a decade after moving out of my parents’ house, they have no way of knowing that I’m on my Switch past 8pm – and the OLED has a beautiful backlit screen, so many of my childhood worries are far behind me. But I still love browsing the Pokedex, and recent additions have only made that more enjoyable.

Sword & Shield showed shiny Pokemon in the Pokedex, clearly taking notes from Pokemon Go, which has its own ShinyDex that you can navigate. This made me feel especially proud of my shiny collection, which is sadly often forgotten, relegated to my box. I shiny hunted in Shield more than any other game since Alpha Sapphire, spending hundreds of hours riding my bike in circles and, latterly, waiting for co-op players to make their moves in Dynamax Adventures. With my collection vastly expanded, however, I forgot about many of the shinies I caught or hatched. It’s a sad situation, but Escavalier and Drifblim are just a little bit forgettable.

The best change, however, was in Legends: Arceus. Instead of scientific descriptions of the Pokemon, Professor Laventon gave a very personal opinion of each monster. Written in first person, they’re more like diary entries than scientific documents, but full of fun and personality. The best example is when you catch a Porygon in a Space-Time Distortion – the computer program Pokemon terrifies Laventon, a Professor used to studying beasts with just his eyes and jotting his findings down with a pencil and paper. 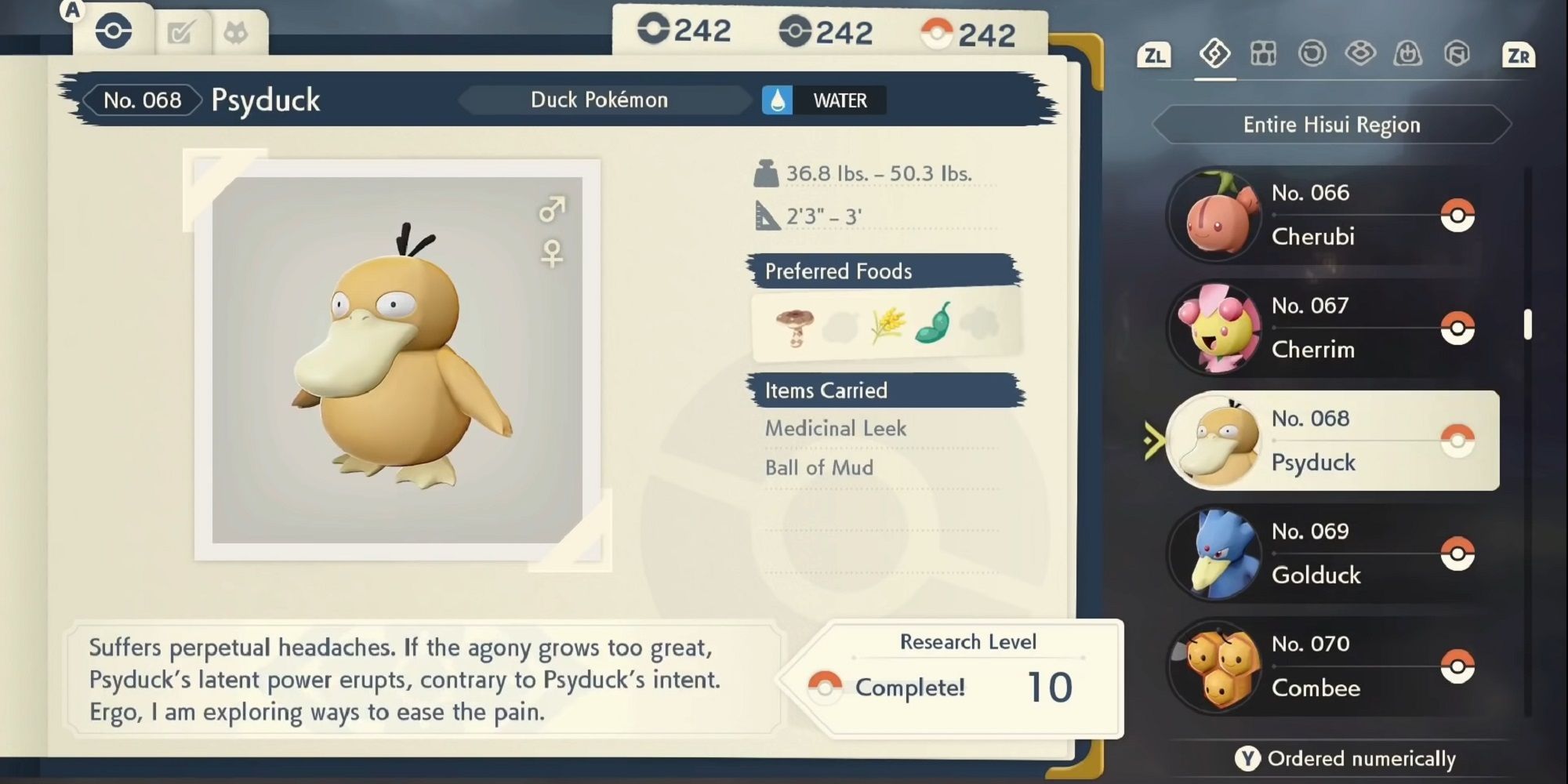 He’s also often wrong. He writes that Togetic has never been seen in the wild, and yet you can find them. This isn’t a developer oversight, or at least I don’t think so. You’re the trainer helping him to fill in the ‘dex, and he just adds his comments. Most Hisuians haven’t explored a fraction as much as you have, so it makes sense that many have never seen a wild Togetic. But nothing compares to the reverie with which he holds Arceus: “It is the heavenly fount from which pours the light that shines across Hisui,” he writes. “Its luminance guides and protects all Pokémon. Hisuian mythology states that Arceus is the creator of all things.”

The scientific Pokedex entries penned by the likes of Oak and Elm have their merits, and are what caused many of us to fall in love with the monsters in the first place. But the personality that Laventon injects is unmatched, and, although their lab coats suggest otherwise, I’d love Scarlet & Violet’s Sada and Turo to put more of themselves into Gen 9’s Pokedex.