Kingambit is the third and final evolution of Bisharp in Pokemon Scarlet & Violet and has, to date, the most complicated and difficult evolution process in the franchise. Evolving a Bisharp into Kingambit is a multi-step process that, with even one error, can leave you standing back at square one. Its strange complexity is practically impossible to find on accident, and so following a guide is required for the player attempting to evolve Kingambit for the first time.

Nevertheless, the difficulty is immensely rewarding in the end when earning Kingambit that, with its excellent typing (Steel/Dark), superb physical stats, and new signature move: Kowtow Cleave, can become a real threat on any balanced team. In the late game, you'll find Kingambit indispensable and a real linchpin to the strategies your opponents use – in PvE, Raid, and PvP alike. 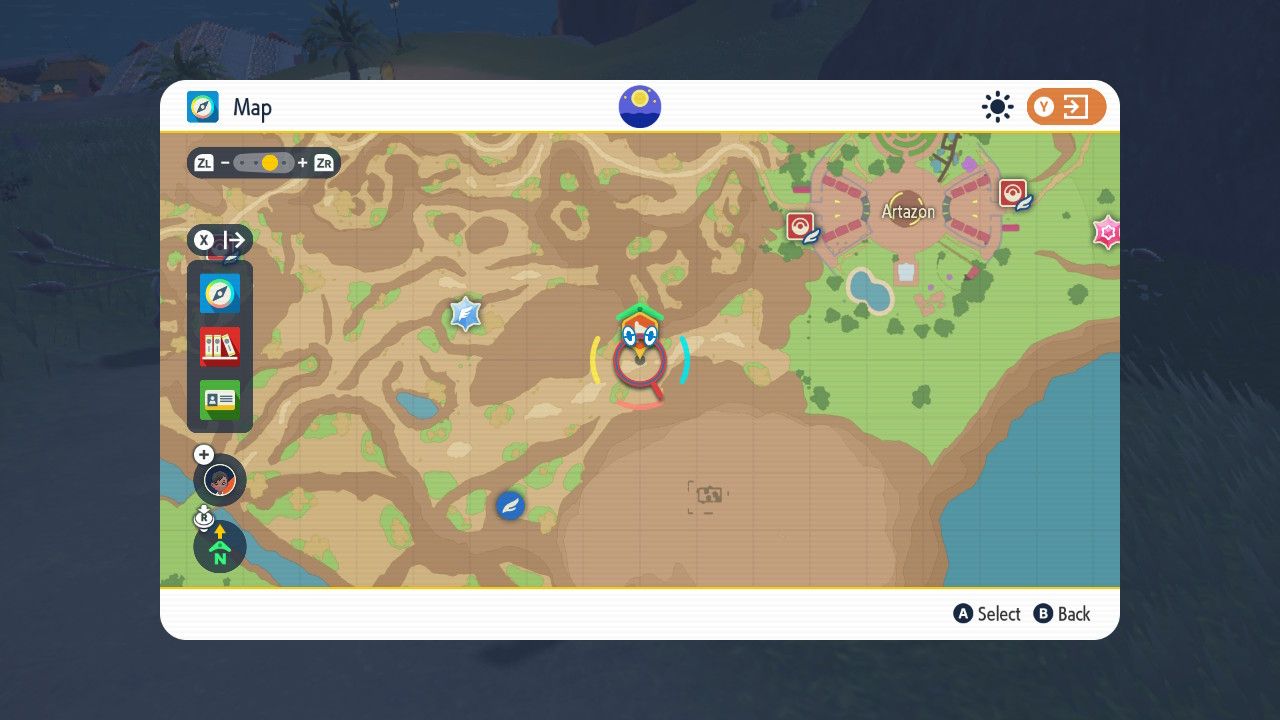 The first step to worry about is finding a pokemon in this line to eventually evolve into Kingambit. If you're wanting to grow your pokemon with your team throughout your playthrough, you can grab a Pawinard early south of Artazon in the South Province (Area Five). It evolves at level fifty-two into Bisharp. 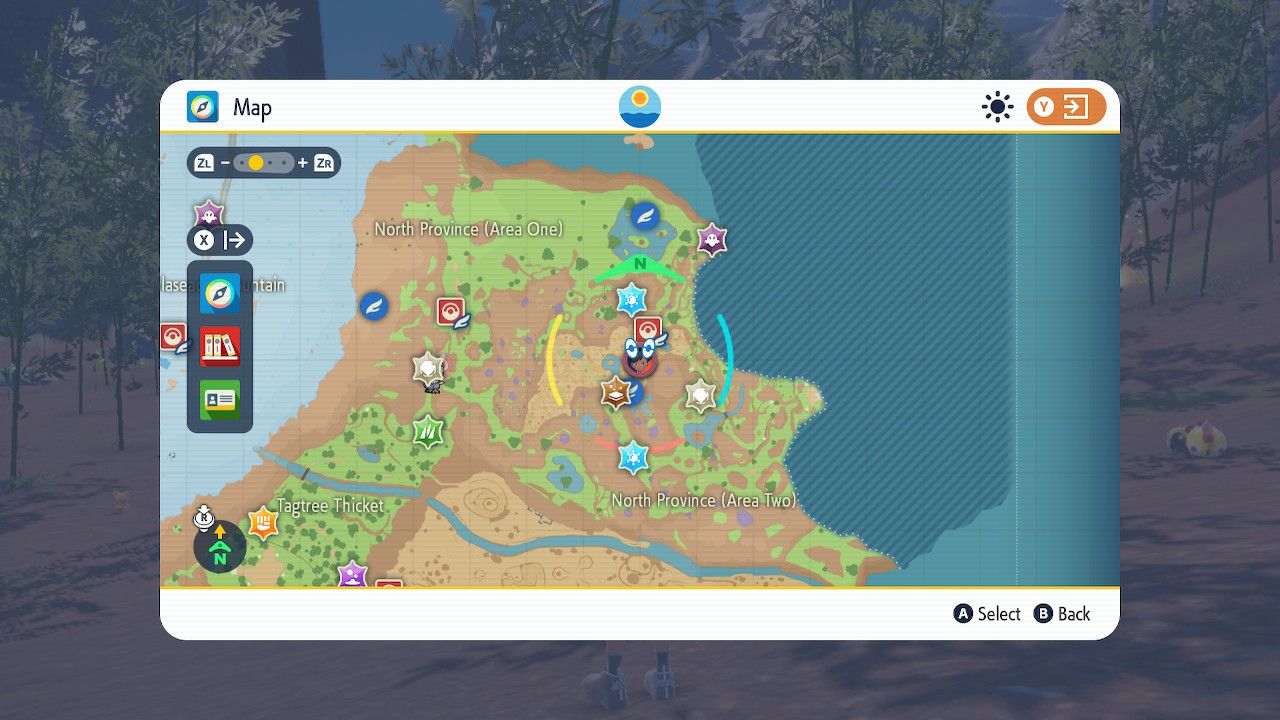 If you wish instead to catch a Bisharp and skip the grinding levels needed to evolve it, you can find them spawning in the bamboo forest in the North Province sandwiched between Area One and Area two and next to Fury Falls (a flyable location). It is at this location where the bulk of this evolution process will need to happen.

To evolve Bisharp, you will need to place it at the front of your party and locate three other Bisharp who spawn as in a group of Pawinard in the aforementioned bamboo forest in the North Province. This may take some time as Bisharp only has a standard spawn rate of thirty percent on its own, and the chances for it to spawn a group are even lower. 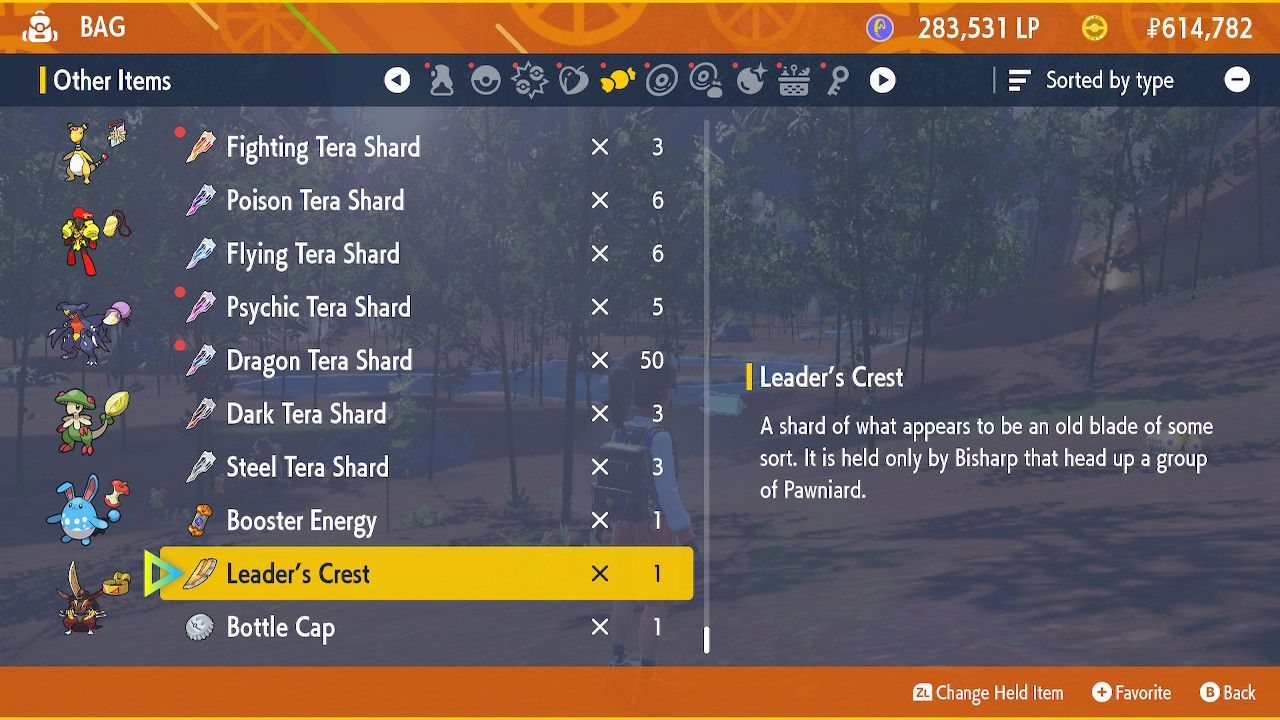 This item is only used by the game itself to mark the Bisharp that count toward defeating the correct number of them to evolve. If you choose to place this item on a Bisharp, it will have no effect. The item, outside the game's calculation system, has no apparent in-game effect. The Leader's Crest is only found on Bisharp surrounded by Pawinard.

You can also increase your odds of finding a Bisharp by making one of these sandwiches:

To make fighting these Bisharp easier/faster, you can teach your Bisharp to use Low Sweep (TM) or Brick Break (TM) in order to give an advantage against other Bisharp.

When your Bisharp has defeated three other leaders – and if they didn't already level up during the third and final fight – they need only level up once in order to evolve into Kingambit. How your Bisharp levels up once three are defeated does not matter. Eventually, you will be prompted by its evolution.

Kingambit Moves, Stats, And Use 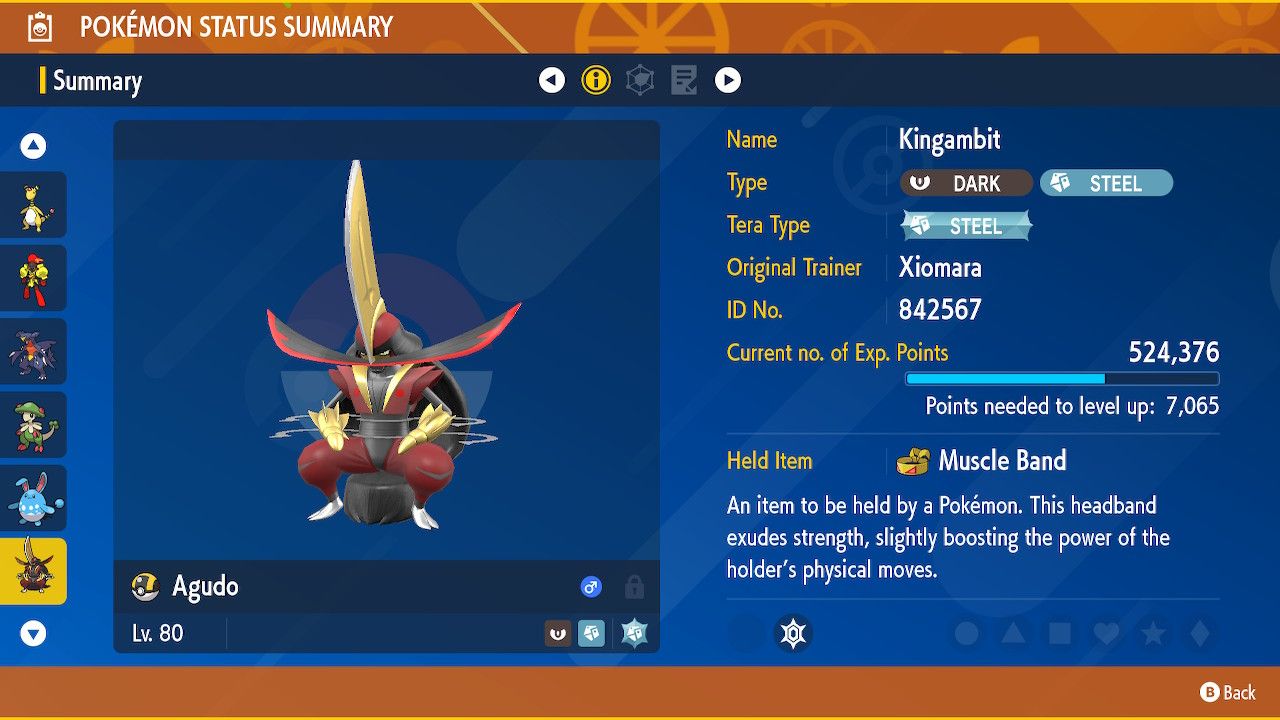 Kingambit is an exceptional addition to any team and is also used in Geeta's Champion team. It's incredibly easy to underestimate this pokemon given its quadruple weakness against Fighting type. However, its movepool is exceptional, its stats are deadly, and its access to both Defiant and Supreme Overlord as abilities make it a devastating addition to any team. 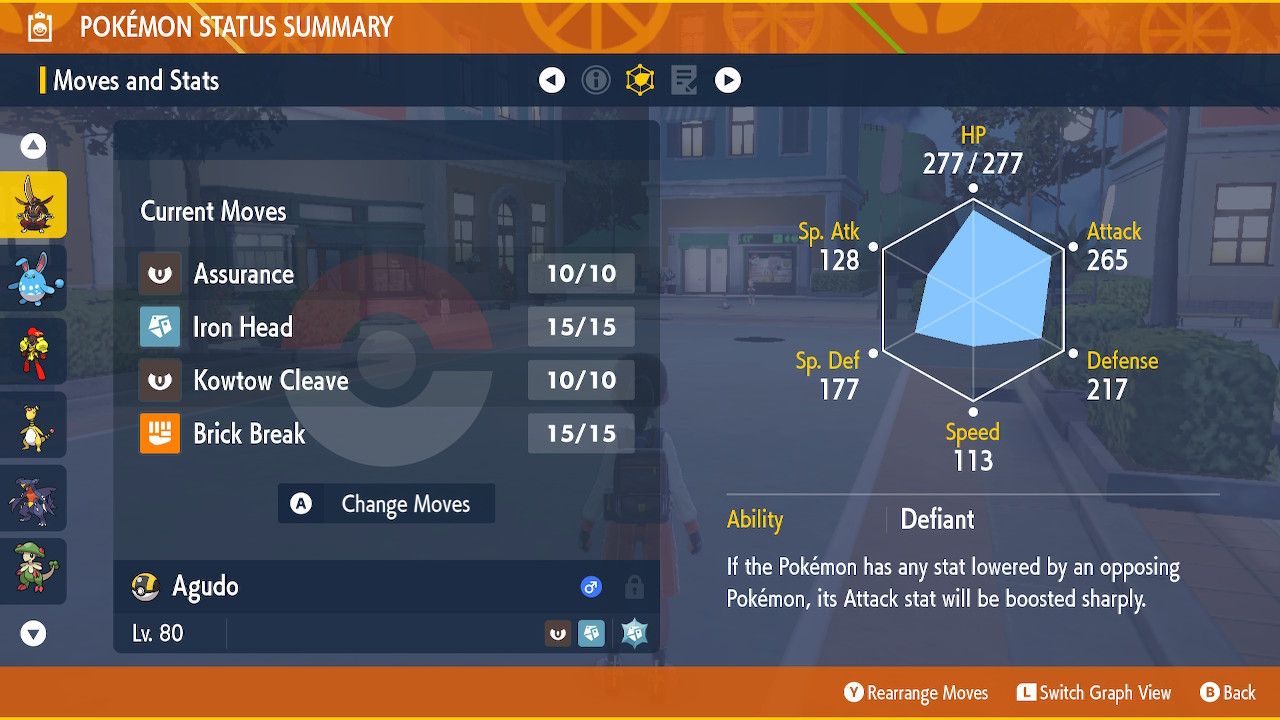 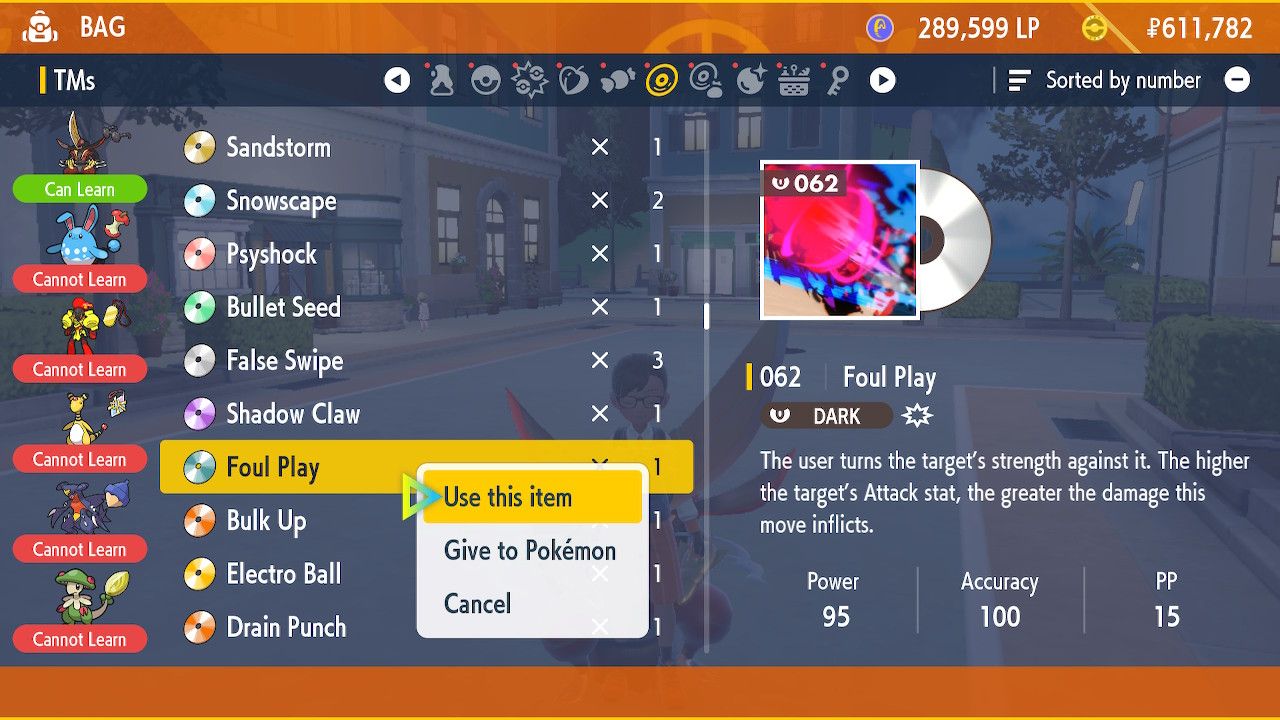 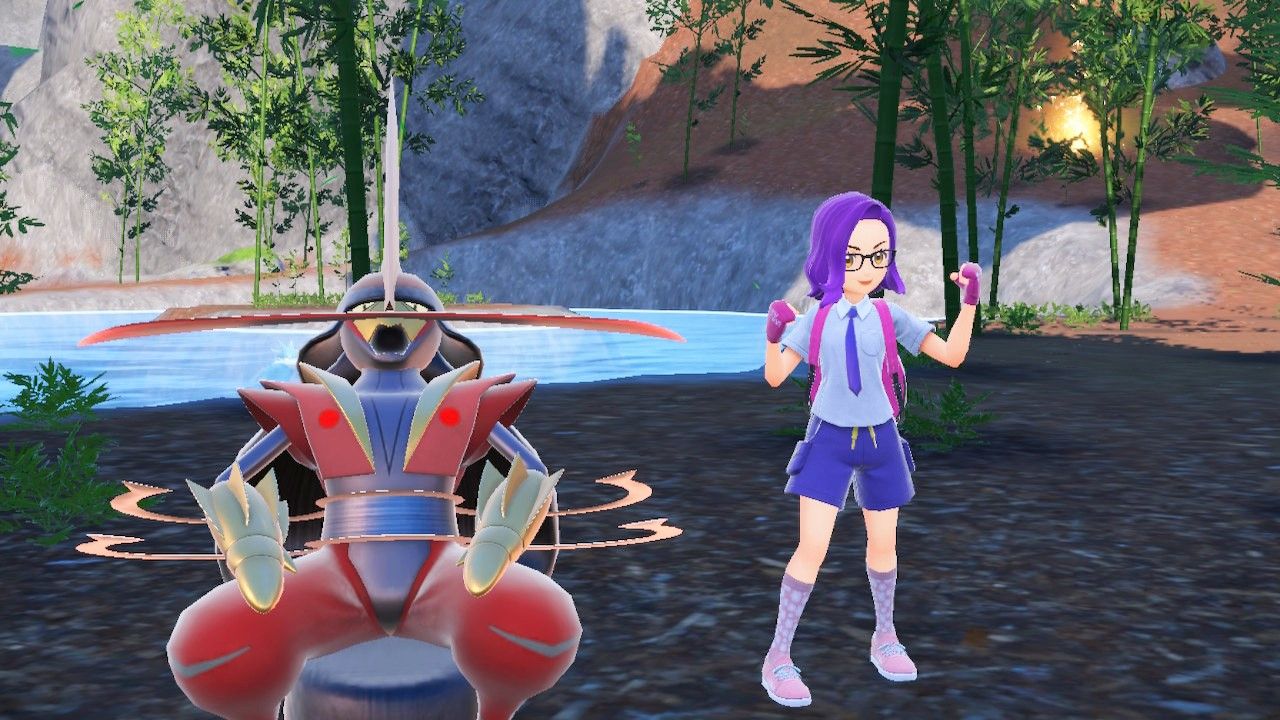 For standard gameplay (PvE), you can expect Kingambit to play a pivotal role in crushing Fairy and Psychic type pokemon. You'll have to keep an eye out for fighting, fire, and ground types, but with the right and smart strategy, they don't provide much of a challenge. When it comes to fighting gym leaders (especially for the rematches), you'll definitely want Kingambit on your team for the match against Tulip as it is a full counter against her team with only slight concern for her Gallade counter-mon. It's a solid option against Nemona for a good portion of her team and a number of other late-game gym leaders as well, and in regards to the Ace Tournament, it can serve as a decent bulky sweeper in the back of your party. Overall, Kingambit has few rivals in terms of performance in the late game. 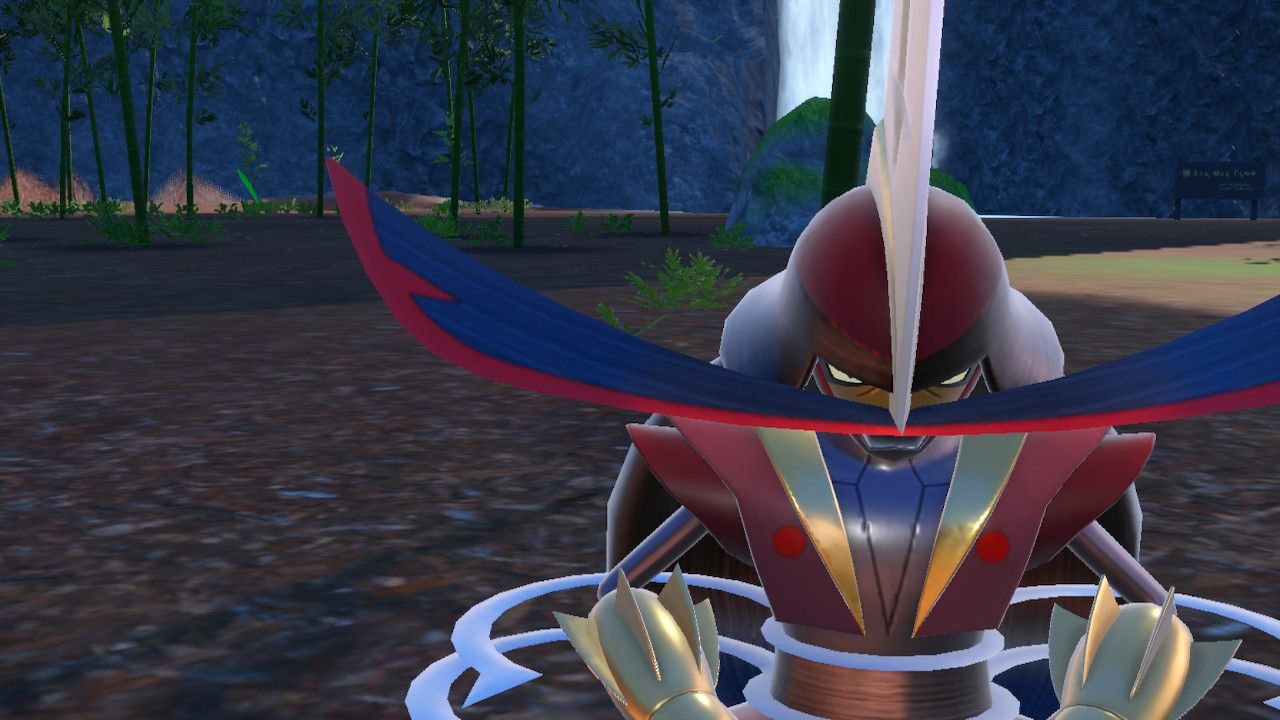 For PVP, Kingambit's standard use in the competitive scene is still under development, but popular strategies make use of its movepool and speed stat in two ways:

Kowtow Cleave is nice for PvE, but accuracy teams in the competitive scene are regarded as niche. Using Kowtow Cleave to its fullest in PvP is very conditional. Iron Head for flinching and covering Fairy types is always recommended, and Brick Break and Zen Headbutt as coverage moves are on the list of popular options.

Defiant and Supreme Overlord are both excellent abilities. For competitive, Defiant is best used in doubles and in VGC where group stat lowering is relatively common, as is the ability Intimidate. In Singles, Supreme Overlord Kingambit has seen immense popularity and is generally a better option for the bulky late sweeper.

You can maximize Defiant's potential in niche teams by pairing it with Foul Play. As it scales off of a pokemon's attack stat, the ability and Kingambit's already high base stat can create a devastating combination. Paired with a working Trick Room team, the results can be catastrophic for opponents that don't counter quickly enough.

The best nature for this pokemon is Adamant (+Atk/-Sp. Atk), with a recommended EV spread of +252HP/+252Atk/+4SpD. The list of recommended held items for Kingambit include: