Sometimes, the simplest queries are the most daunting. In Dungeons & Dragons, the basics of character creation can understandably scare folks away. In Magic: The Gathering, all those colors might feel overwhelming. And, in the Pokemon TCG, you might look at the section on Trainer cards, notice all the sub-categories, and fade away from the scene like the ghost of a motherly Marowak.

Trainer cards do come in several varieties, it's true, and that makes them the most complex of the Pokemon TCG's three main card types. But it's all quite comprehensible — you just need that all-important foundation of understanding. This guide will cover the basics behind Trainer cards, introducing you to each kind.

Before we explain what makes each type of Trainer card unique, perhaps we should focus on what separates Trainer cards from those other two types. The Pokemon Trading Card Game designates every card as either a Pokemon card, an Energy card, or a Trainer card.

Now, wait, why would only some Pokemon TCG cards be called Pokemon cards? That's easy! The cards designated specifically as Pokemon cards are the ones that are a Pokemon. A Charizard card is a Pokemon card. A Potion is not a Pokemon card. Perhaps someday we will be introduced to a Pokemon species literally called Potion. For now, we live in a more sensible universe. 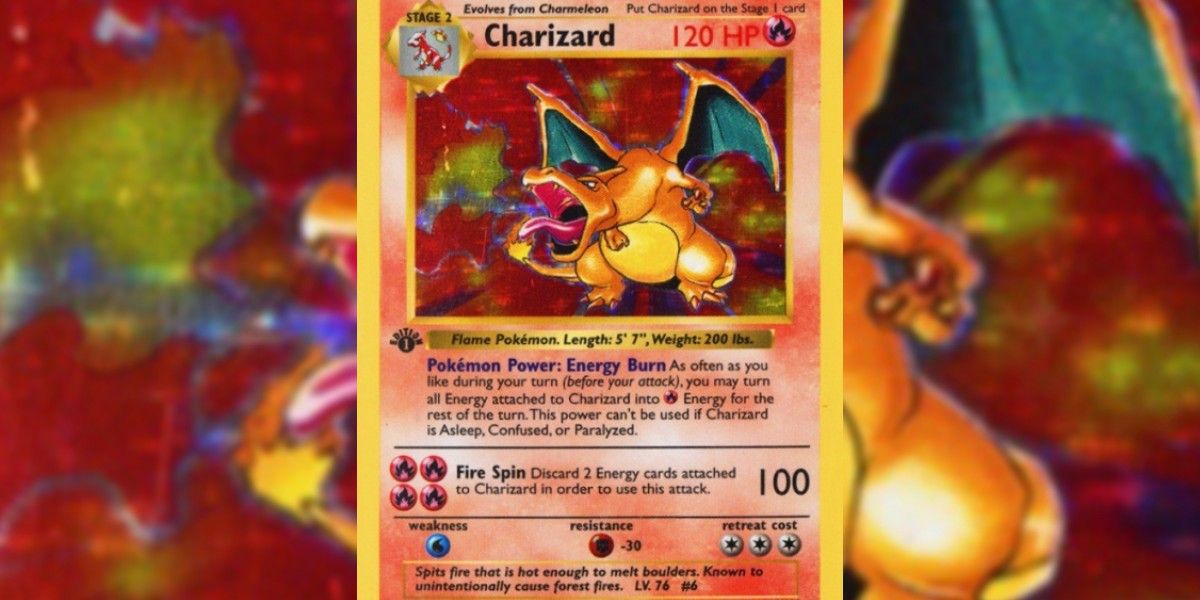 Energy cards are what fuel your Pokemon. They come in several flavors, each corresponding with one of the Pokemon TCG's elemental types. Increasingly, the game is also reliant upon special sorts of Energy, such as Fusion Strike. These tend to spiffy things in addition with providing the necessary, well, energy, to let your Pokemon attack. 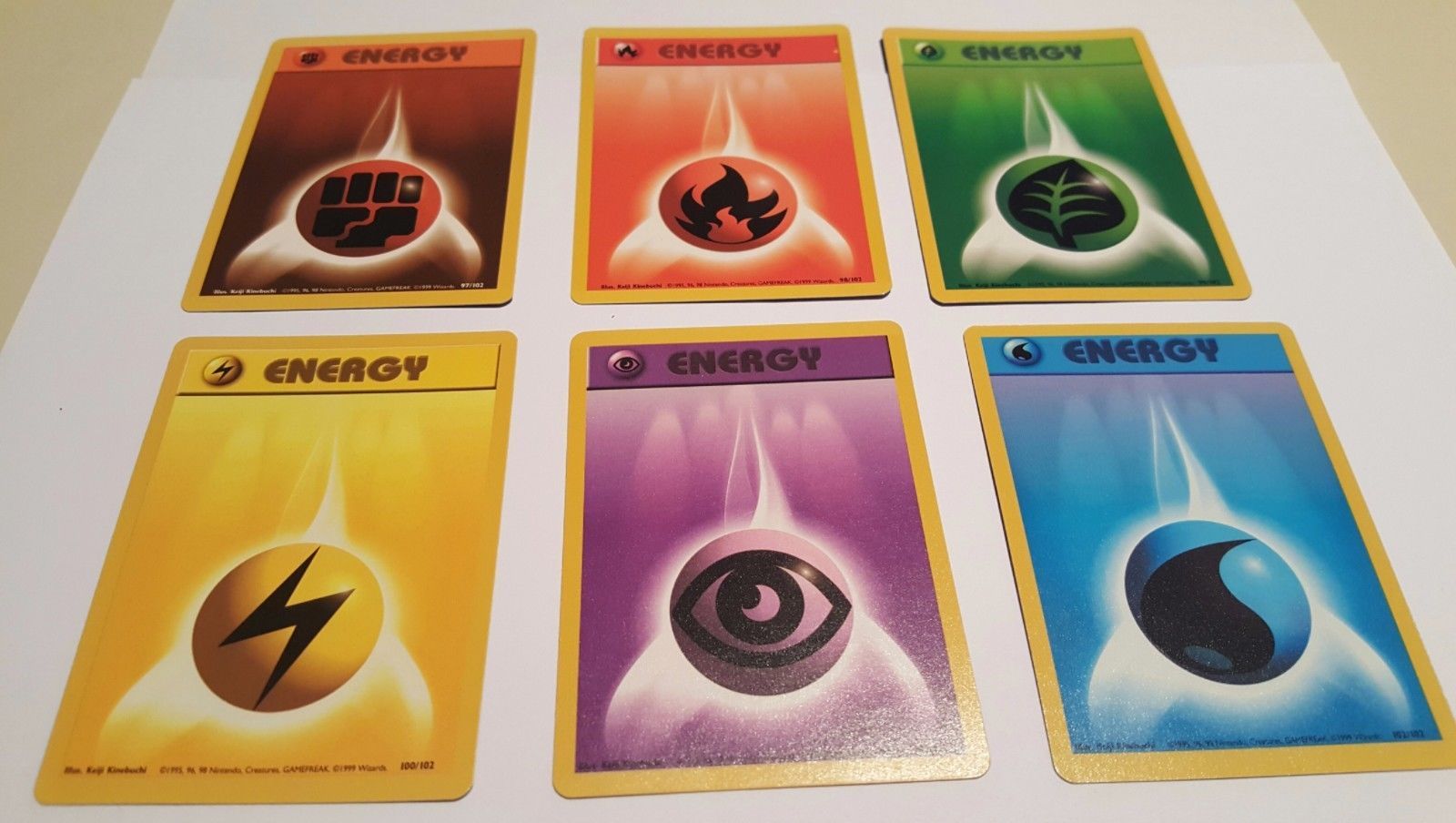 And so that leaves us with Trainer cards. Think of Trainer cards as the all-inclusive category for anything that is neither a Pokemon nor an Energy. (That is, after all, entirely correct.) Trainer cards will always have 'Trainer' written on them, but they'll typically contain a reference to their sub-category as well. Take a look: 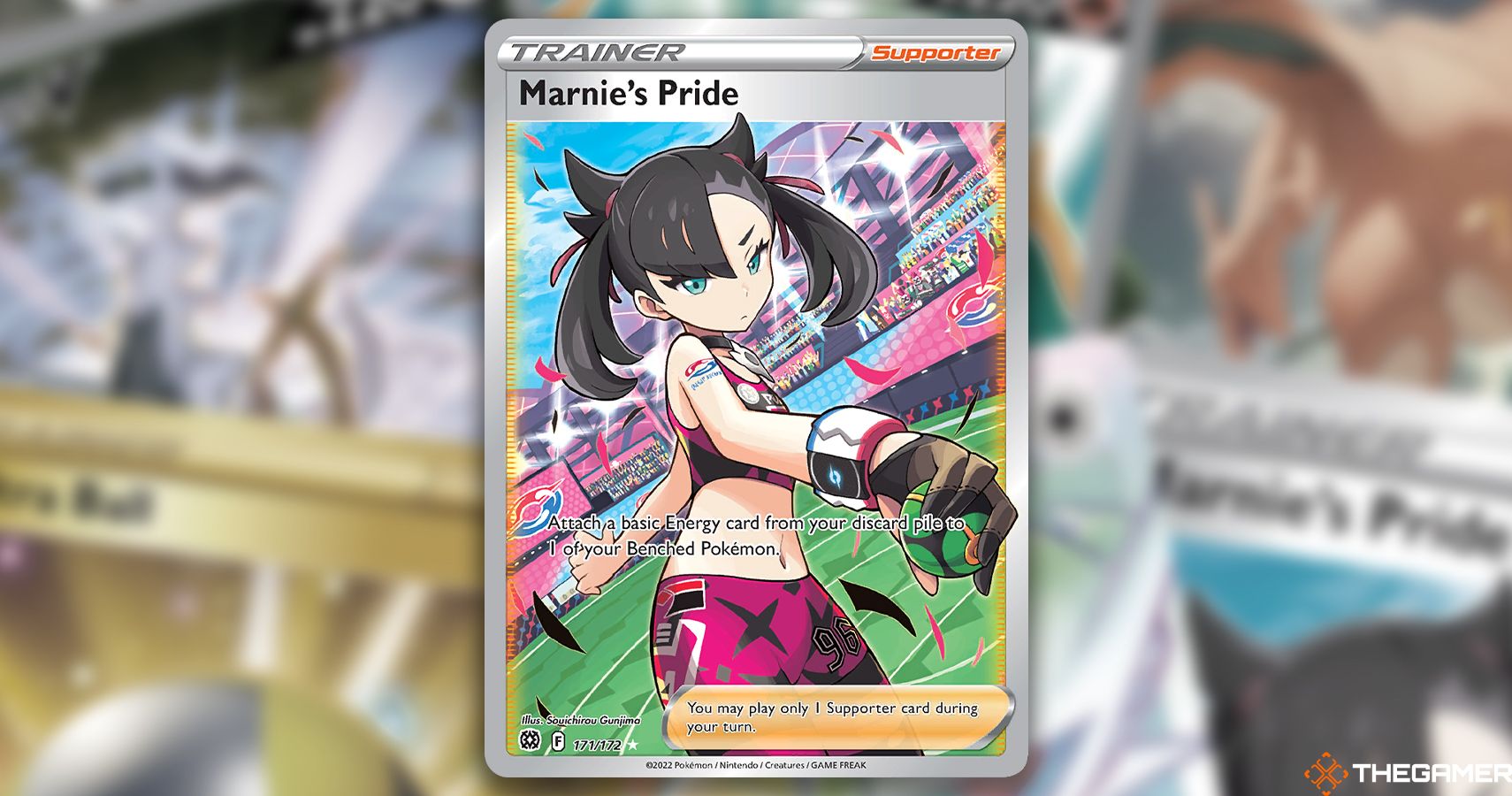 The same applies to our aforementioned Potion. Or any other item, including Poke Balls of any kind. Or stadiums, or equippable tools, and so forth. Not a Pokemon? Maybe it's an Energy. Not an Energy, either? It's got to be a Trainer.

Now we'll break into the heart of this guide — an overview of each kind. 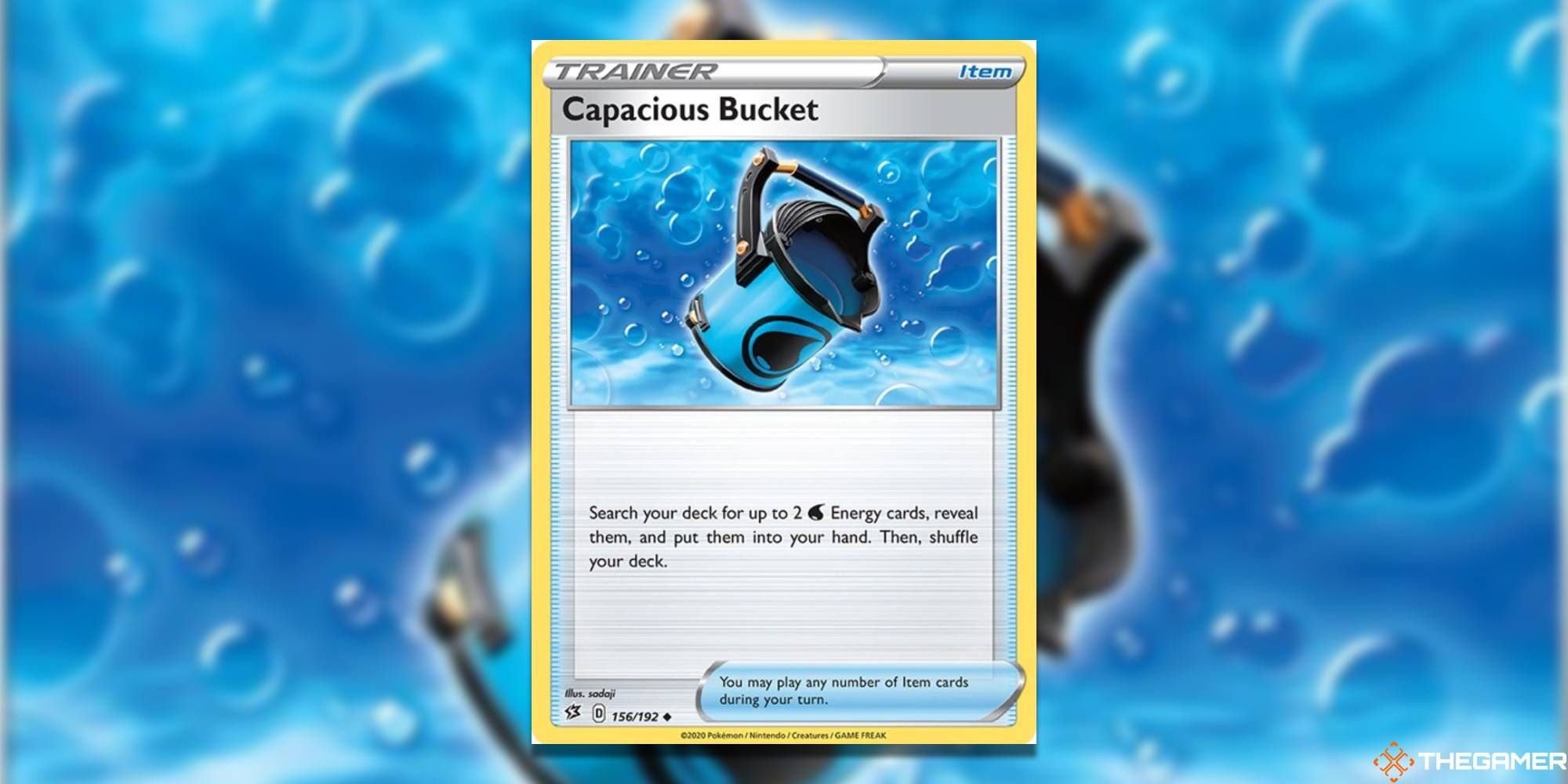 Item Cards are great. You can use as many Item Cards per turn as you'd like, provided, of course, that you have them readily available in your hand. Items are the most common kind of Trainer, and while they're generally not quite as powerful as Supporters, what they lack in instant oomph they make up for by providing the potential for a devastating strategy when used well.

Take our Capacious Bucket above. Being able to search for two Water Energy means you can rest assured that you'll have that Water Energy to fuel your Water-type Pokemon's attacks. Running out of Energy is a frequent crisis in the Pokemon TCG that can lead to devastating dilemmas.

Picture, if you will, a deck that has four Capacious Buckets. (Side note: four is the maximum number of cards you can have for any type, save for basic Energy.) Since Pokemon TCG decks contain exactly 60 cards, four Capacious Buckets ought to be plenty; you're bound to bump into at least one. But if you have four, your odds are that much higher that you'll find more, and your Water Pokemon will have a wonderful well to draw from. 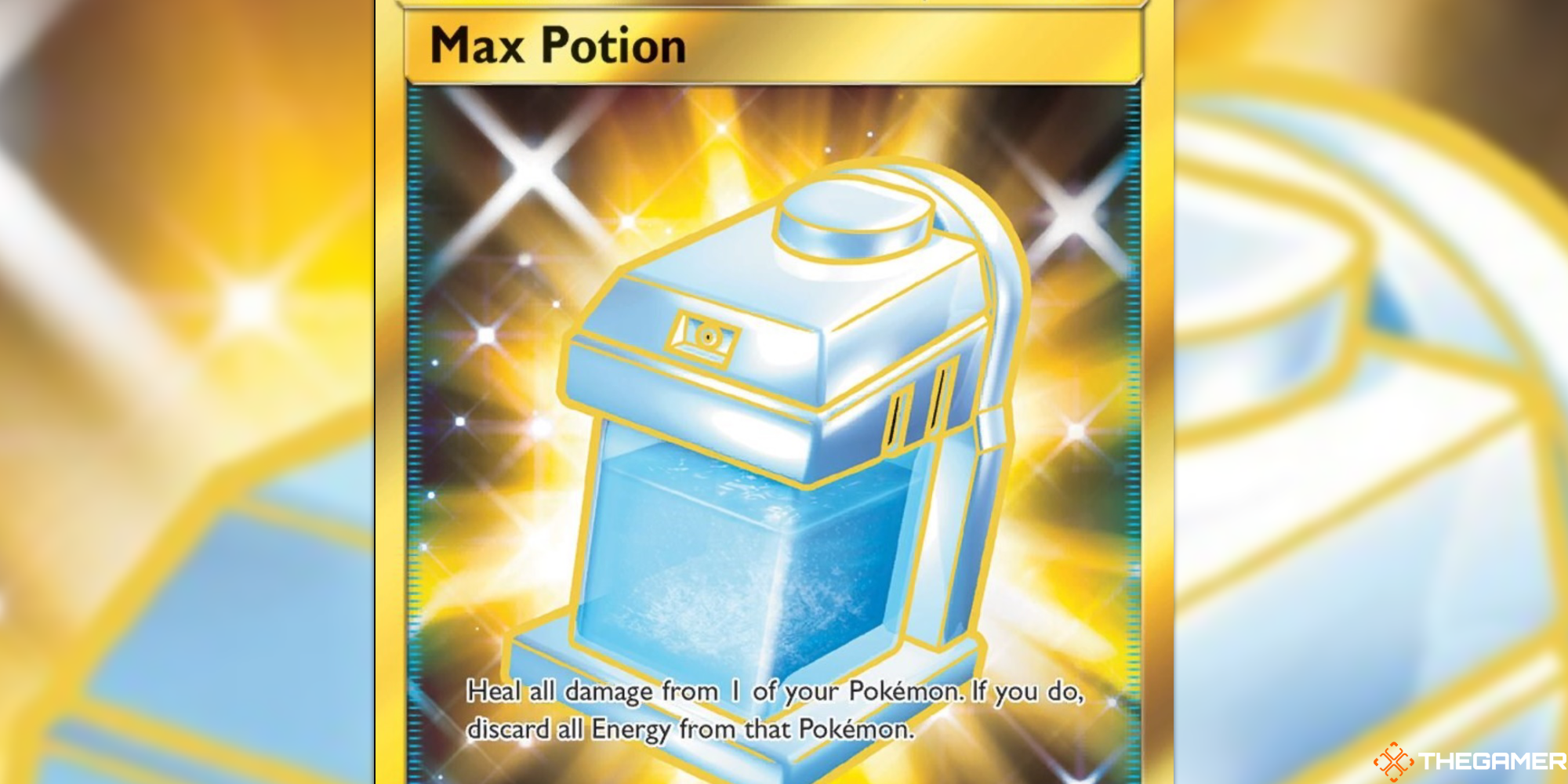 Back to our Potion-speak from earlier, here's a Max Potion, another example of the hundreds of Item Trainer cards on the market. This one's a bit of a compromise, right? Healing all of a Pokemon's damage is a huge deal, especially if you have a real titan on the battlefield like a Pokemon VMAX. But discarding all their Energy means they can't do much until they get more.

Since there is no cap on the number of Item cards you can use per turn, you may find that certain Item cards work well when used together. If you have a Water-themed deck with Max Potions and Capacious Buckets, you can heal your Blastoise VMAX to full health and then pull two guaranteed Water Energy from your deck.

Under normal circumstances, you can only attach a single Energy card per turn, and we'll operate under the assumption that that's the case here, but that still means you should heal first, then attach; already, you're back on the path to unleashing a powerful attack again. 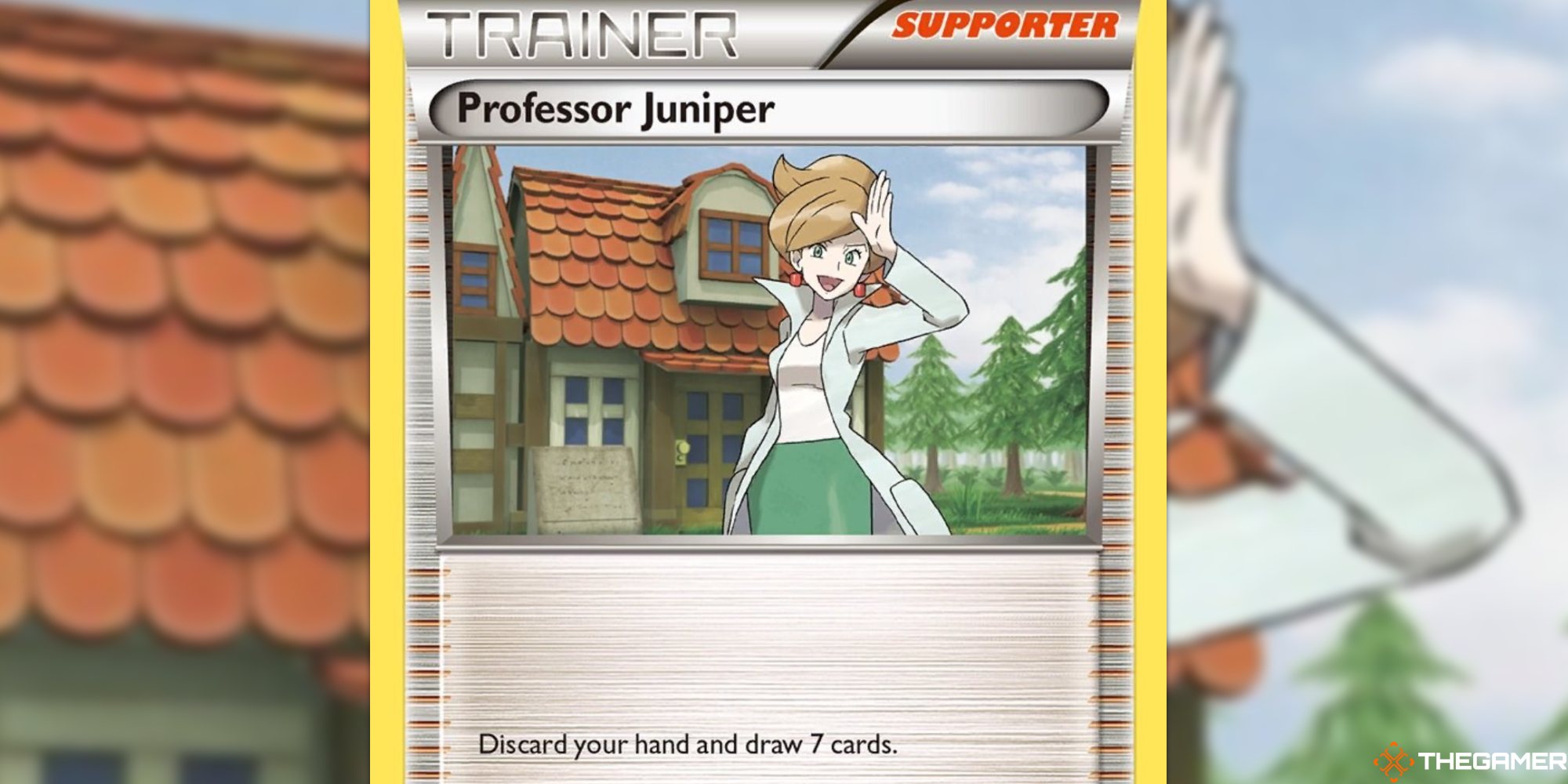 Let's move on to Supporter cards next, since we've mentioned them a couple of times already. As noted, you can only use one Supporter card per turn, and this is thanks to their greater immediate potential to cause a more drastic positive shift for you. Professor Juniper lets you discard your hand and draw another seven cards, as you can see.

Imagine being able to do that up to four times in a row, should you happen to have four Professor Juniper cards in your hand. It seems a bit much, right? Think how you'd feel if you watched your opponent take so many opportunities to get a hand that's stacked against you. (Then again, if you run out of cards, you lose the game, so it'd be pretty funny if that happened as a result — but we digress.)

You can use cards like Professor Juniper even when you've only got a single card in your hand, effectively increasing your chances sevenfold of having a better hand to suit your situation. 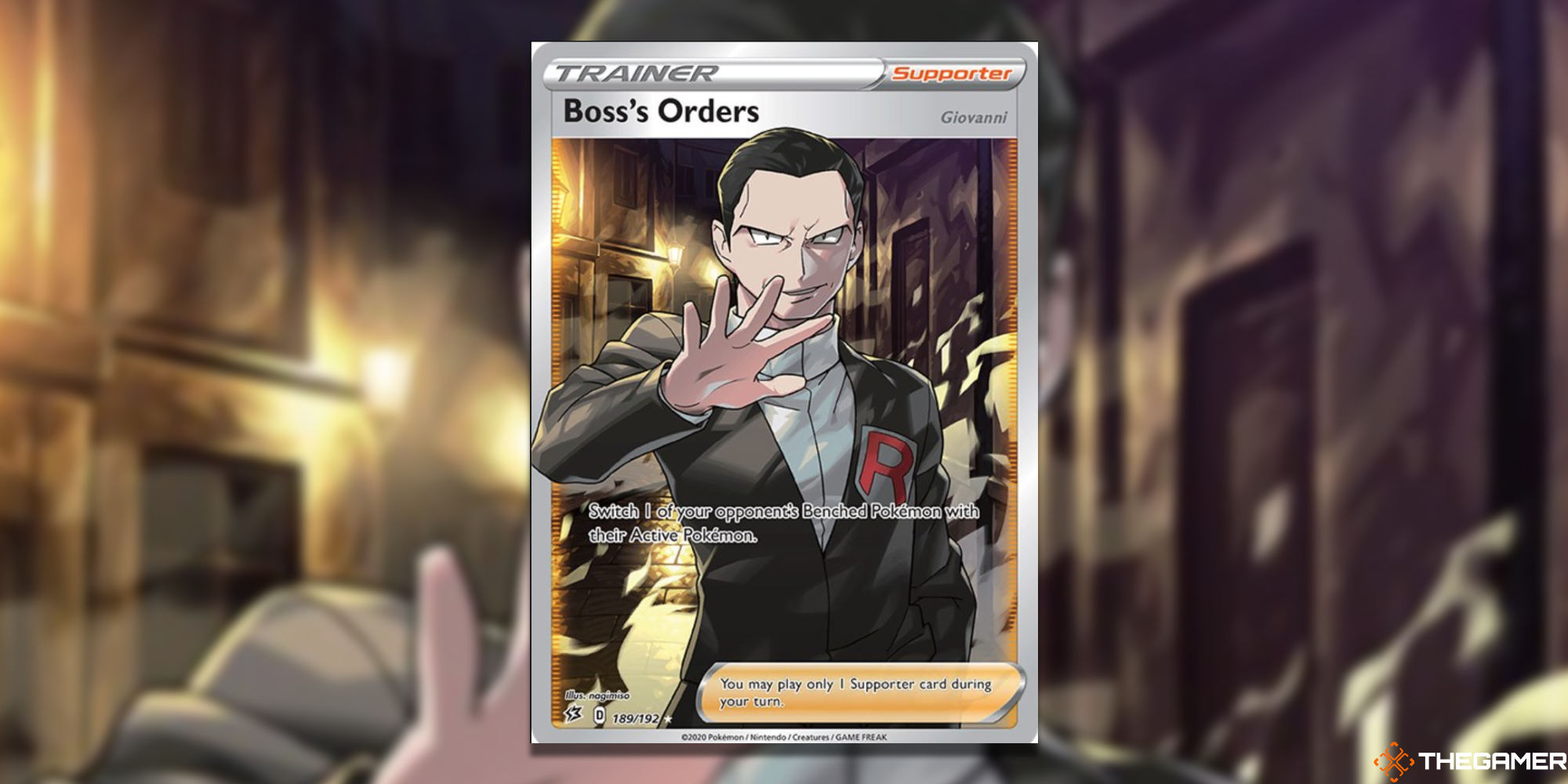 Boss's Orders is another cool card. It's also quite common in the competitive scene. Being able to forceably swap out your opponent's active Pokemon means you can pull someone back into the proverbial ring who's low on health and blast them to smithereens, or protect yourself from a terribly mighty upcoming strike, and so forth. The once-per-turn nature of Supporter cards always protects against gameplay imbalance by limiting us to a moderate extent. 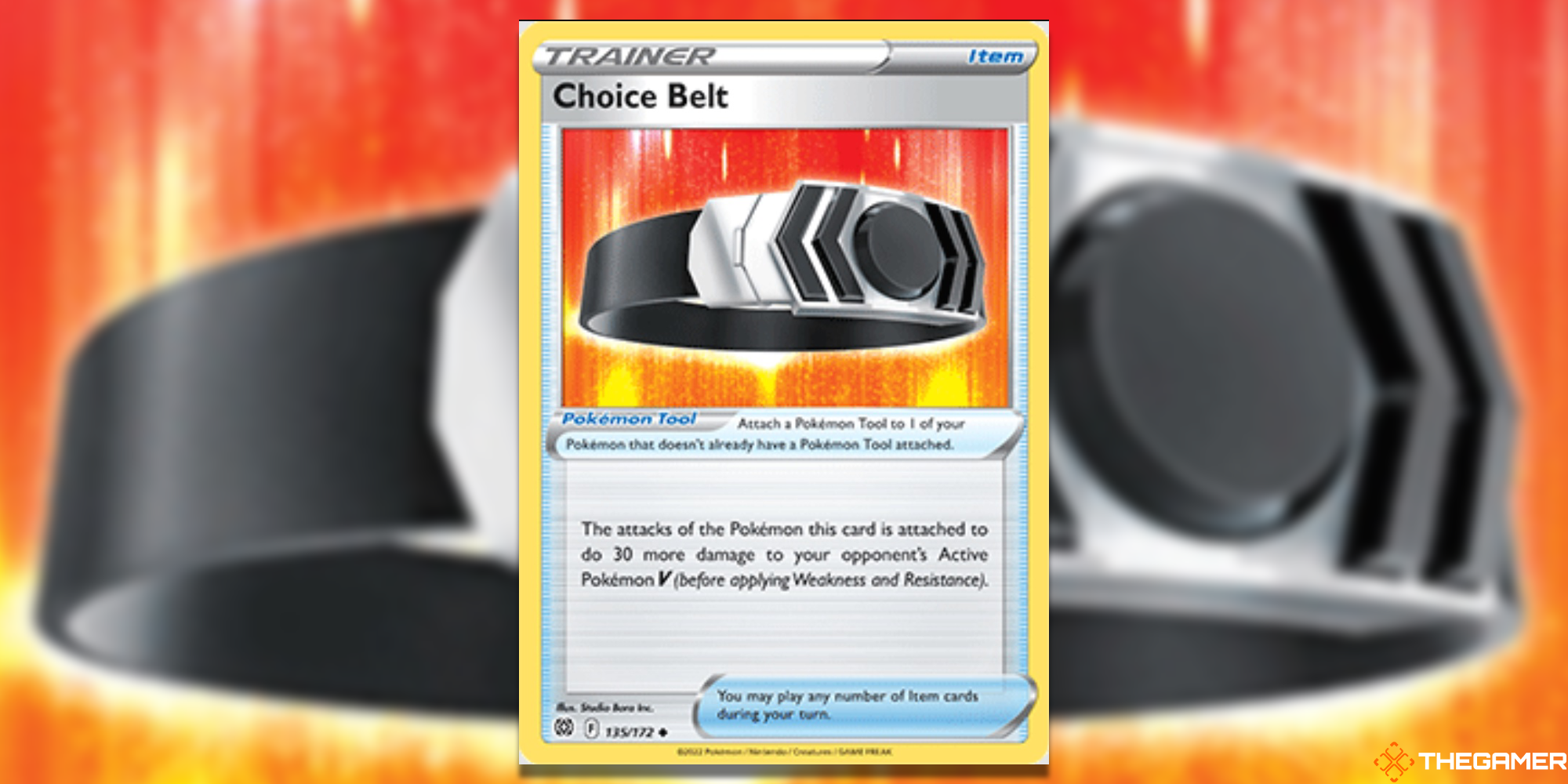 Tool cards are rad. You can equip them to a Pokemon and reap their rewards on a regular basis until, and unless, your opponent has an attack, ability, or Item card that forces you to discard them. You can only equip one Tool card to each of your Pokemon, but that's plenty if you know what you're doing.

The Choice Belt has been a mainstay against decks that are loaded with V, VMAX, and VSTAR Pokemon cards for years. With the arrival of the Scarlet & Violet era, they'll be replaced by the return of an older group known as EX cards… but that's just fine, because the Choice Band does the same thing against them.

It's imperative that you crush VMAX and VSTAR cards as quickly as possible, lest they crush you instead. The opportunity to do 30 extra damage can and will mean the difference between failure and success at times. 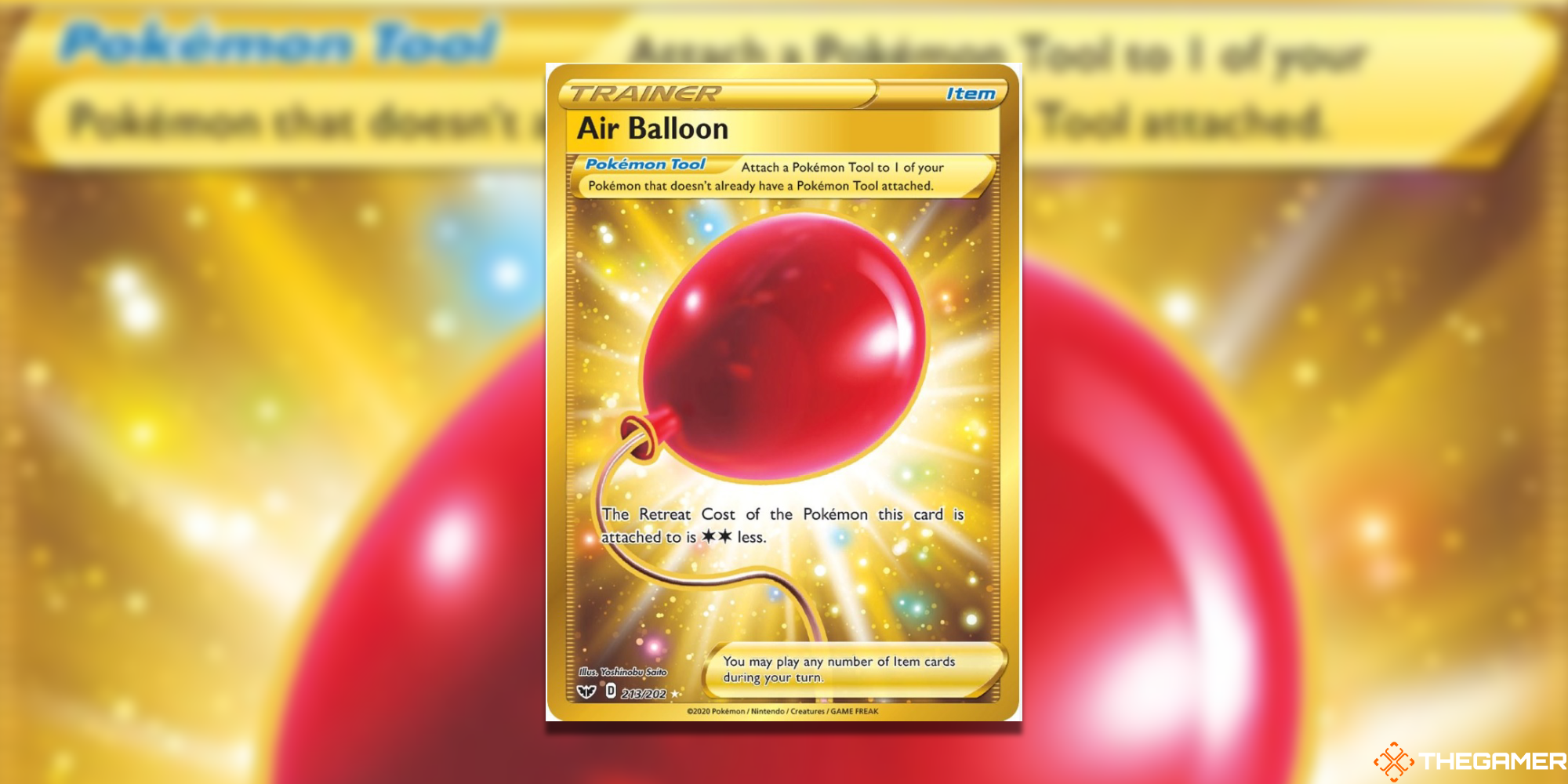 As with every other category of Item card in the Pokemon Trading Card Game, Tools come in a wide variety of options. Air Balloons are fantastic for withdrawing Pokemon with high Energy retreat costs, and are especially delightful for Pokemon with retreat costs of one or two, as they'll totally negate it.

Not only does this mean you'll be able to pull back if your heavy hitters are hurting for some healing, but there are some great strategies out there involving Air Balloons that can completely turn the tables on unsuspecting players. 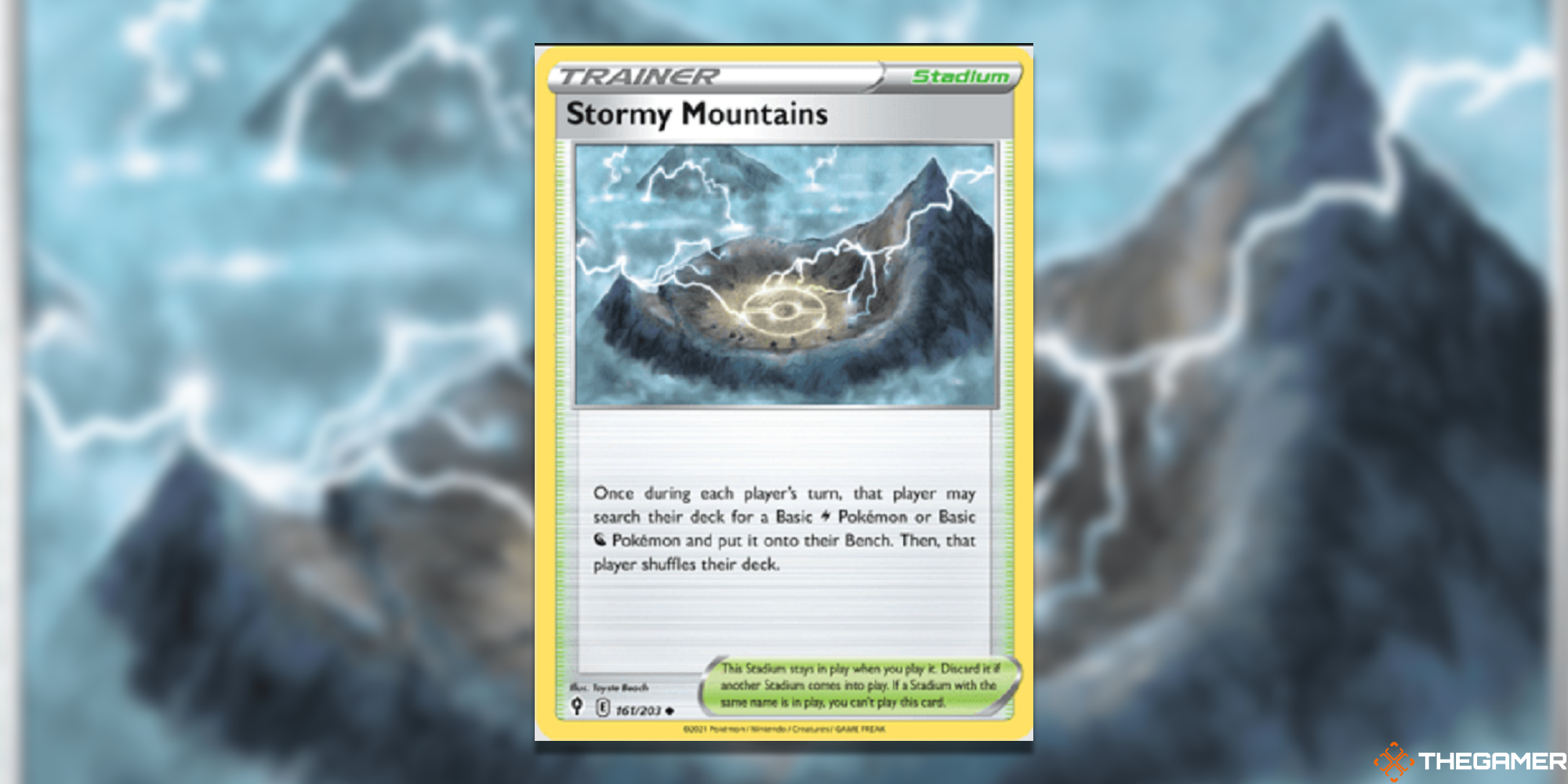 Stadiums might just be the easiest to understand. Players can place a Stadium card down on the field; in doing so, they'll replace the currently-placed Stadium card (if there is one). This typically means aggressively replacing the other player's Stadium, since unsurprisingly, the Stadiums selected for your deck are designed to benefit you, and vice versa.

With Stormy Mountains, players who run an Electric deck, Dragon deck, or a deck that combines both (!) will have easier access to the Pokemon they need; importantly, this often does absolutely nothing for their opponent. The only way that isn't the case is if they're running a similar deck, and oftentimes you won't know in advance whether that's the case. But the odds are relatively slim, right?

That's Stadiums in a nutshell. They're built around the notion that they provide a player with an extra perk. Some players will thus add a couple of Stadiums to their decks just to get rid of any especially ruthless Stadiums on their opponent's part.

There have been other categories of Item cards through the years, such as Ace Spec, but since they've long since been retired we'll refrain from going over them. They may emerge in the future, and you can be sure a couple more kindws of Item card will be created eventually, but for now, you should have the foundation you need to recognize the gist of each category and work some basic tactics into your deckbuilding.