The Pokemon branding machine continues to spin(arak), as new Poke-themed airplanes are now flying around Japan.

Solaseed Airlines is currently running three distinct, Pokemon-themed flights. Each one has its own unique paint job dedicated to a particular Pokemon, as well as its own seating arrangement. Pens and stickers designed with each of the respective Pokemon’s appearances in mind are also included in the offer, which will be a pretty nice bonus for the kids on board.

The first plane embarked on its maiden flight just last week and is modeled after Exeggutor. It traveled from Miyazaki City to Haneda airport, according to CNN. The other planes are based on Alolan Vulpix and Chansey, and fit the culture and weather of their destinations. This collaboration between Solaseed Airlines, the cities involved, and The Pokemon Company will continue until the end of 2021. Unfortunately, we won’t see these planes in the US anytime soon, if at all given that this initiative is for local flights only. 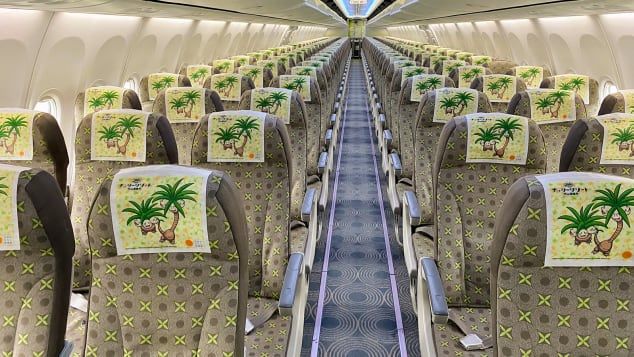 This gimmick could be designed as a way to drive interest to possible tourist destinations like Miyazaki and the eastern coast of Kyushu. Outside of Pokemon, we think it would be pretty hilarious to see a Battlebus-esque airplane in the style of Fortnite. Just don’t forget your parachute…

Pokemon isn’t just taking over the skies – it will also be taking over the realms of space. On December 31, Pokemon will be taking over the International Space Station for a special stream. We have no idea what to expect from the event, but it’s worth remembering that one of Pokemon Diamond & Pearl’s legendary Pokemon, Palkia, controls the elements of space. Rumors have long been circulating about a possible remake of the revered DS games, so it would make sense if The Pokemon Company teased its plans for the new year with this stream. That’s only speculation though – there’s no need to be as excitable as an Eevee just yet. That being said, a leaker has already mentioned that the supposed Pokemon Diamond & Pearl remakes will arrive in November 2021… Let’s just wait and see.

The last Pokemon games, Sword & Shield, disappointed fans with their lack of ‘mons and unremarkable graphics. In 2019, we compared the series to Madden, a yearly release that scales down in quality almost every year. Hopefully the critically-acclaimed DLC packs for the most recent Pokemon entries imply that the next game will be more impressive.