Tis the spooky season for cowpokes in Red Dead Online, but players might feel a little tricked rather than treated to learn that Rockstar is rolling out last year's Halloween Pass and events again this year.

After more than a year of very little content, Rockstar confirmed that Red Dead Online will receive no "major themed content updates like in previous years" back in July. They're sticking to that promise with the return of The Halloween Pass 2, which are the same 15 ranks containing the same rewards as last year. Those include spooky masks, clothes covered in blood, and scary accessories to make your cattle rustling and bounty hunting just a titch more frightening.

There is some good news, however. Folks who didn't complete last year's Halloween Pass 2 will find themselves starting right where they left off last year, and those that complete the pass will get the new Hired Gun Kit, which includes the Fierro Bandana, bundles of ammo and consumables, and Capitale valued at 5 Gold Bars. Those who already completed the Halloween Pass 2 last year will receive their Hired Gun Kit automatically. 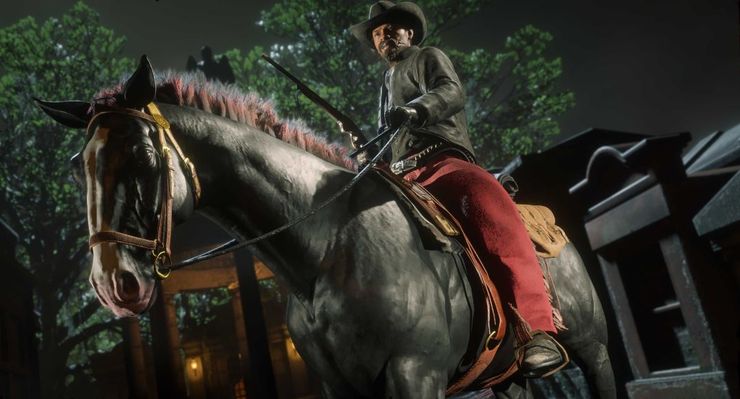 Red Dead Online is also bringing back the All Hallows' Call to Arms event, which tasks players with defending freeholds from waves of enemies, as well as the two Halloween-themed Featured Series: Fear of the Dark and Dead of the Night. All Hallows' Call to Arms will have three new maps, including Heartland Oil Fields, Limpany, and the Saint Denis Graveyard, and also three times RDO$ and XP instead of last year's double rewards. Dead of Night and Fear of the Dark will alternate weeks in October, with Dead of Night being October 4 to 10 and 18 to 24, while Fear of Dark is October 11 to 17 and 18 to 24.

October brings a new course of freebies as well. The Manhunt Bounty Hunter Free Roam Event offers two-times gold, RDO$, and XP. Log in each week to get two Potent Health Cures per week, and play during Halloween week (October 25 to 31) to get two Potent Snake Oil, three Big Game Meat, and 25 Capitale. Participate in any All Hallows' Call To Arms any week and earn four Gun Oil. Red Mane and Tail options for all horses are free all month long and expect a 50 percent discount for haircuts, dentistry, makeup, and hunting knife customization.