We are excited to bring Transform 2022 back in-person July 19 and virtually July 20 – 28. Join AI and data leaders for insightful talks and exciting networking opportunities. Register today!

According to a report by Surfshark, a total of 14.9 billion users have been breached since 2004, losing data such as email addresses, passwords and IP addresses. Researchers determined that the most breached countries over the past 18 years are the U.S. (2.3 billion breached users), Russia (2.2 billion), China (987 milliion), followed by Germany (427 million) and France (395 million). American and Russian accounts are breached way more often than in other countries, making up 30% of the total breaches worldwide.

Meanwhile, breaches of the whole of Europe account for 29.6% of the total cases. To put this into perspective, a single person from Europe has gotten their online account details leaked around six times since 2004. This means that people from Europe are three times more likely to suffer account data leaks than the global population. However, not all countries are exposed to cyber risks on the same level. Russia is the most targeted country, with five out of 10 breaches in Europe happening there.

Russia has the highest breach rate per 100 inhabitants. Statistically, the email address of every Russian account was breached around 15 times. This number is 7.8 times higher than the global average (191 breached accounts per 100 people). So far this year, Russia has the largest number of breached users and the numbers continue to increase. 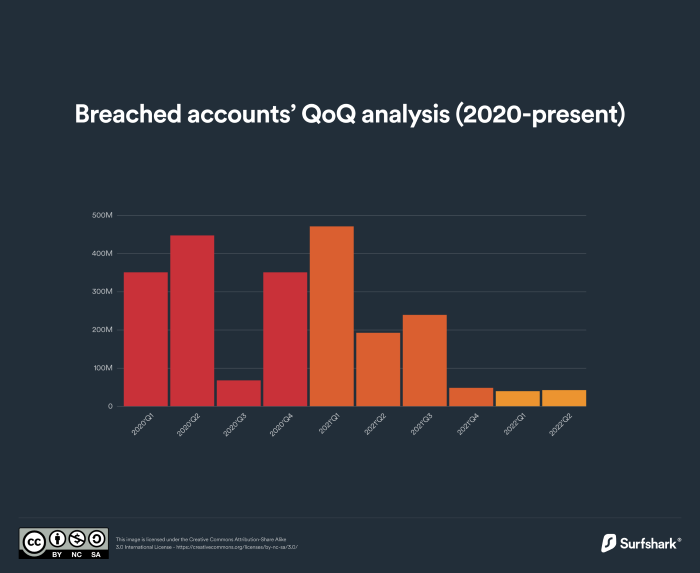 After a lengthy period of decrease, global data breaches are picking up again. The study follows the count of breached users worldwide and updates numbers monthly. Records show that in Q1 2022, 304 accounts were being breached every minute. In the present quarter (Q2 2022), however, breach rates are already 6.7% higher, with 324 accounts being leaked every 60 seconds.

Join us at the leading event on applied AI for enterprise business and technology decision makers in-person July 19 and virtually from July 20-28.

The Data Breach World Map was developed in partnership with independent cybersecurity researchers to visualize the scope and scale of data breaches worldwide. Surfshark claims it is the first-ever tool that shows from which countries users are most affected by breaches according to the gathered data. Users’ locations were identified by email or website domain name, country, city, coordinates, IP address, locale, currency or phone number.

Read the full report by Surfshark.

VentureBeat’s mission is to be a digital town square for technical decision-makers to gain knowledge about transformative enterprise technology and transact. Learn more about membership.