The whole Duke’s Kitchen aspect of Resident Evil Village was truly a delight. Duke was already a pretty loveable character, so the thought of him putting the work in to cook Ethan a meal just pushed him over the top.

So, for those trying to eat all the meals and/or 100% the game, Duke needs ingredients to cook for you, but not vegetables or spices, just meat. There are plenty of guides that go over the three specific “special” types of meat in RE8, but not many that also talk about all the animals found throughout the game in general, though our complete guide does cover just about everything else. So, in as close to chronological order as possible, let’s look at all of them.

The Short Version Of This Guide 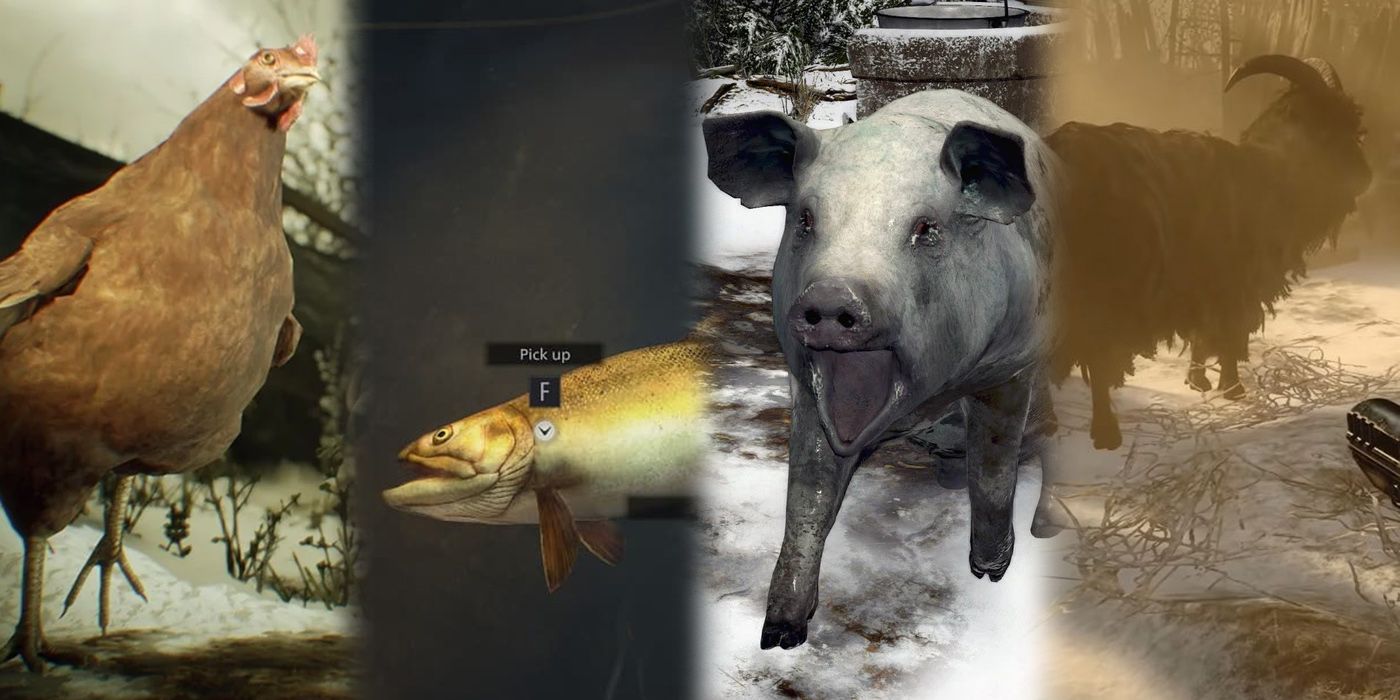 For those of you who don’t need precise location guides to find each animal, here’s where they all are in fewer words as well as how many are in each grouping:

Crows Are Animals, But They Don’t Give Meat 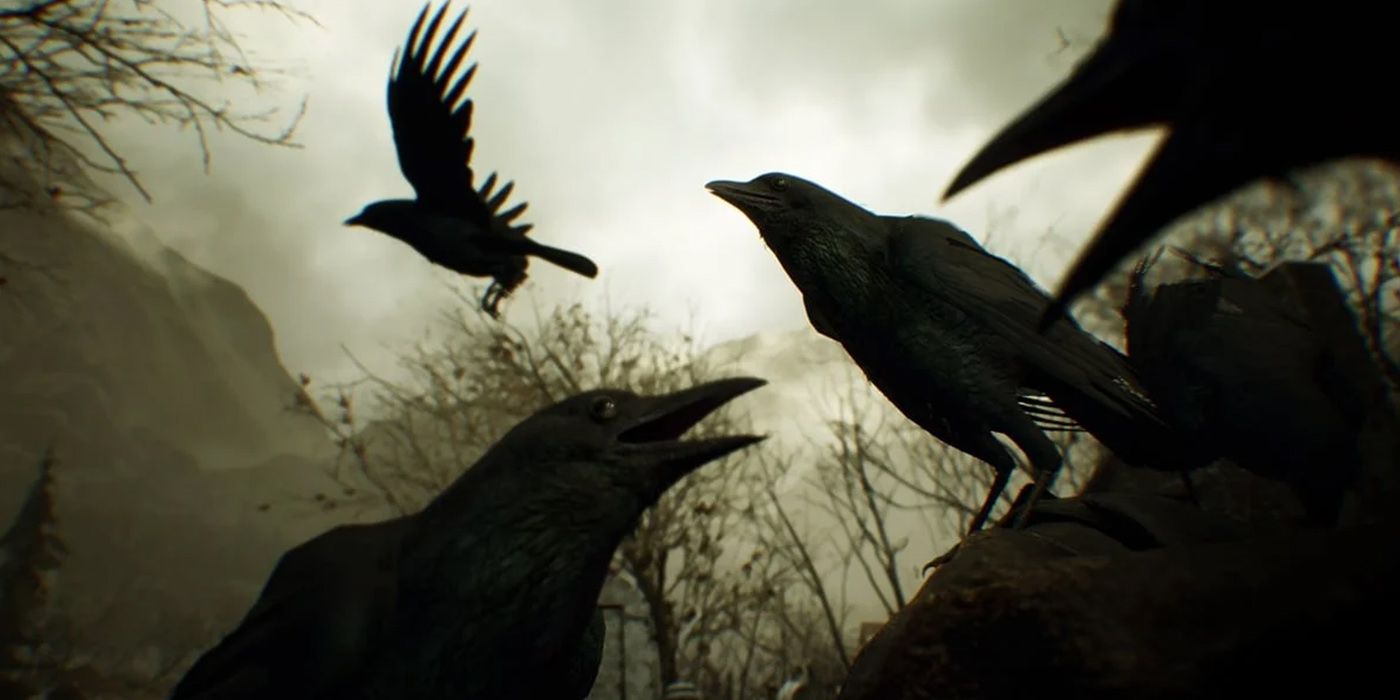 Let’s clear this up right away, the crows in Village don’t give any sort of meat. Much like in RE4, they’re mainly used as an extra source of income or as additional challenge requirements (such as the Squawk Challenge).

That said, they’re still animals found in Resident Evil Village, just not ones with any sort of meat you can use for food. 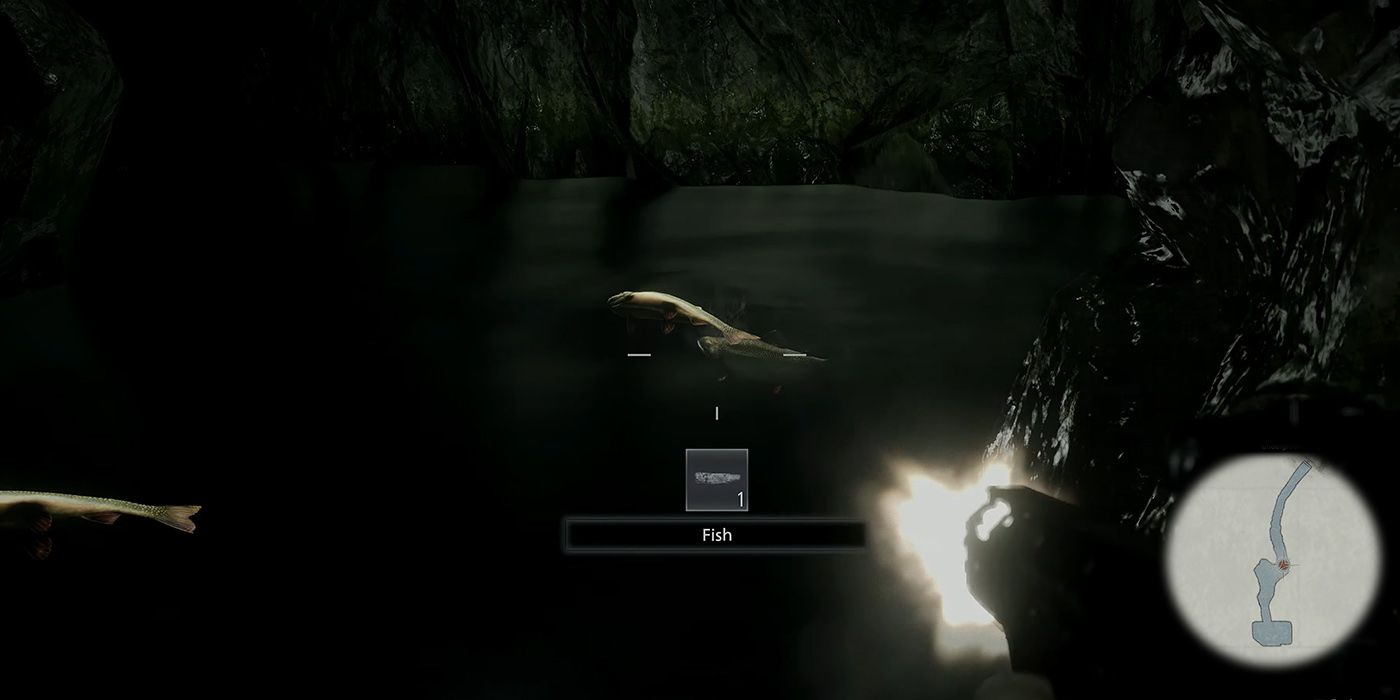 After seeing the Graveyard crows, you won’t find any animals until all the way after all three fights with the vampire Daughters and the fight against Lady Dimitrescu. Right after killing Dimitrescu, getting the first Rose part, and heading on out, you’ll enter this little cave hallway that leads to a slight dropoff into water.

In this minuscule pond, you’ll find your first three fish. Now, make sure to kill and grab all three, as you’ll be unable to access this area again after leaving.

The Graveyard Bluebird With Juicy Game 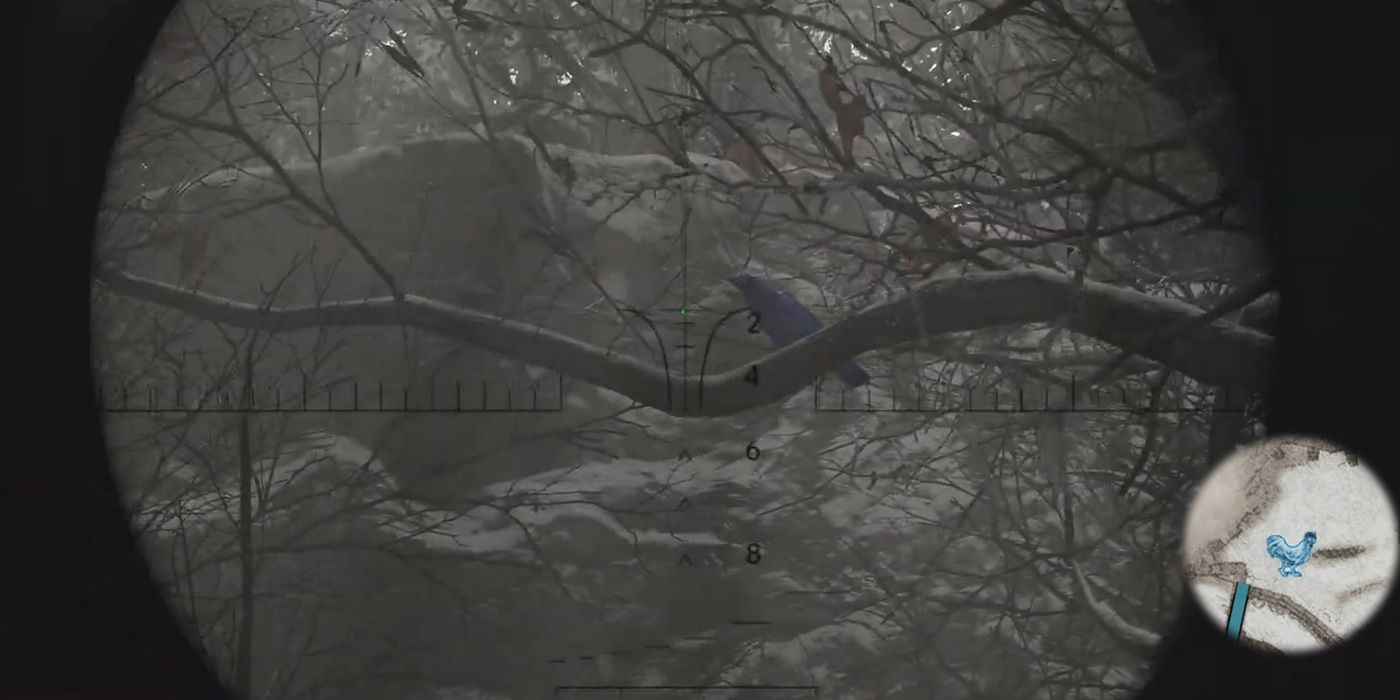 Technically, you probably wouldn’t naturally find the Juicy Game bird perched up in this tree until after you found the photo pointing it out. But, if you already knew about it or this isn’t your first time through the game, it’ll appear after you clear out Dimitrescu Castle. It’s in the tree near the back left of the Graveyard. 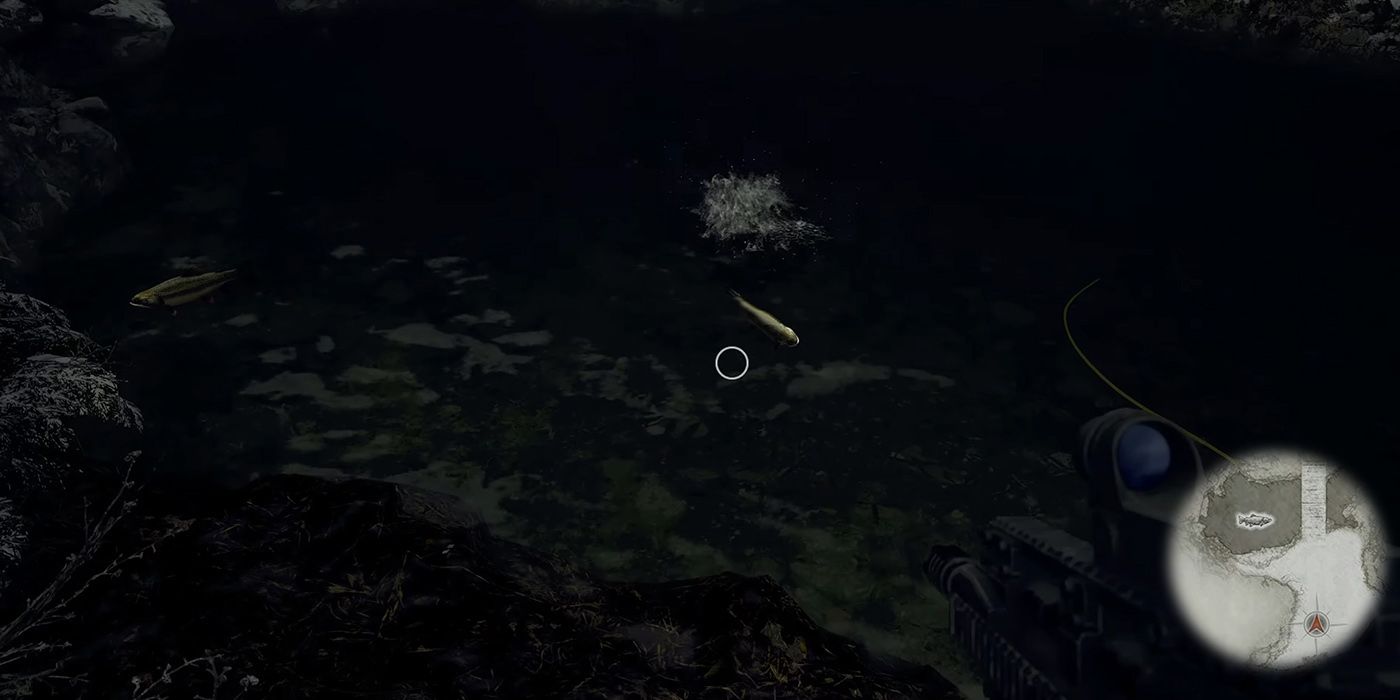 This next one is a bit deceptive since there was nothing in this pond the first time you walked past it.

Basically, next to the (now) permanently inaccessible drawbridge leading to the Dimitrescu Castle, there’s a small moat/pond with three more fish in it for you to kill. 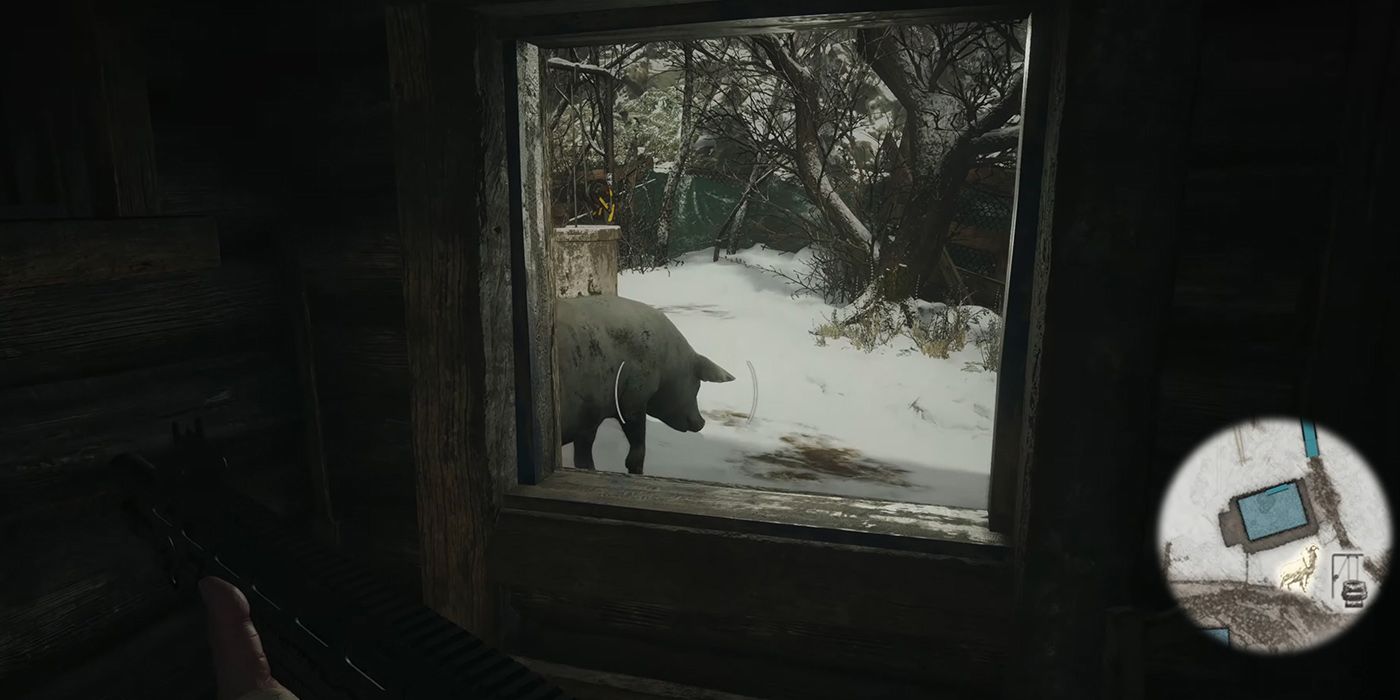 This is the second of three special-type animals found in the game thanks to photographs spread throughout the village. Once again, we’ve already talked about how to find it here, but it essentially just boils down to going back to Elena’s house (where you found those two survivors to bring to Luiza) and peering out their back window.

One Pig Is Near The Start Of The Game 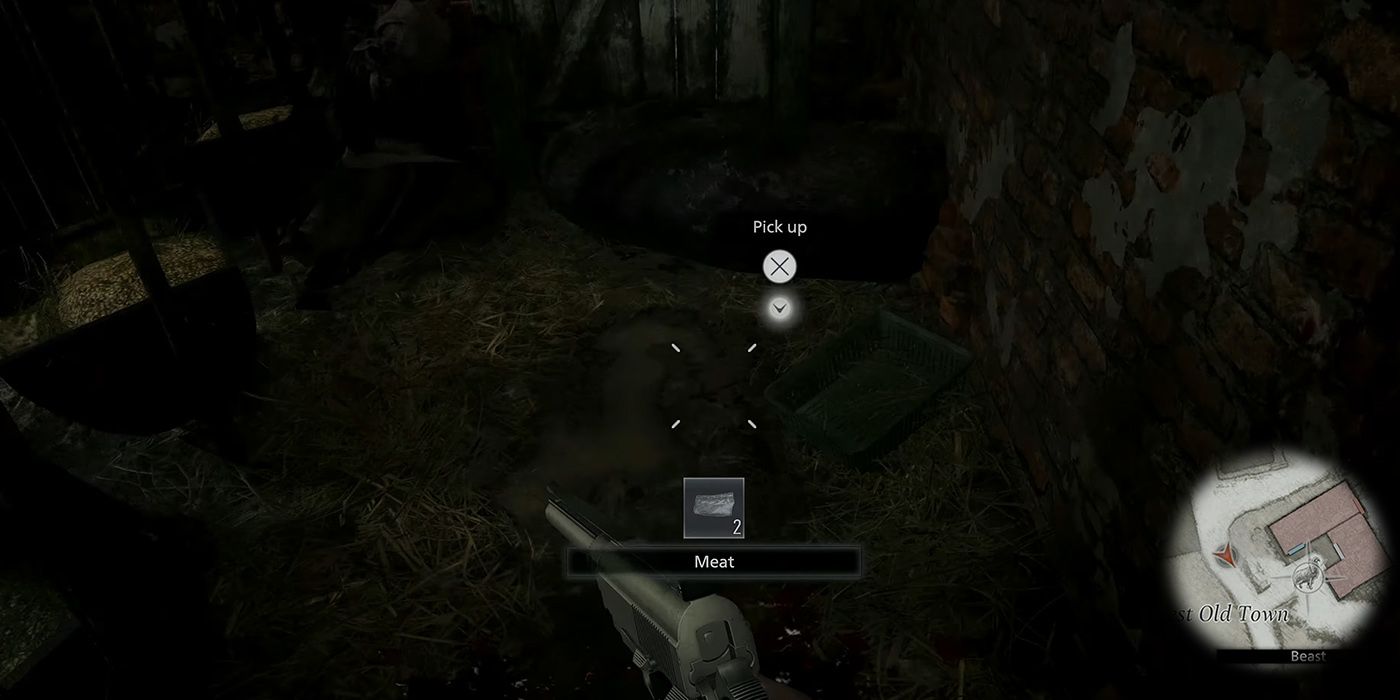 Up until this point, the area of the village you could access was relatively small, but now you should be able to backtrack all the way back to the first house you found after sliding down that snowy hill into the village.

Back at the start of the game, you couldn’t actually do anything here, as you didn’t have a gun yet. But now, in this house, a pig has suddenly freed itself from its cage and is ready to charge at you. 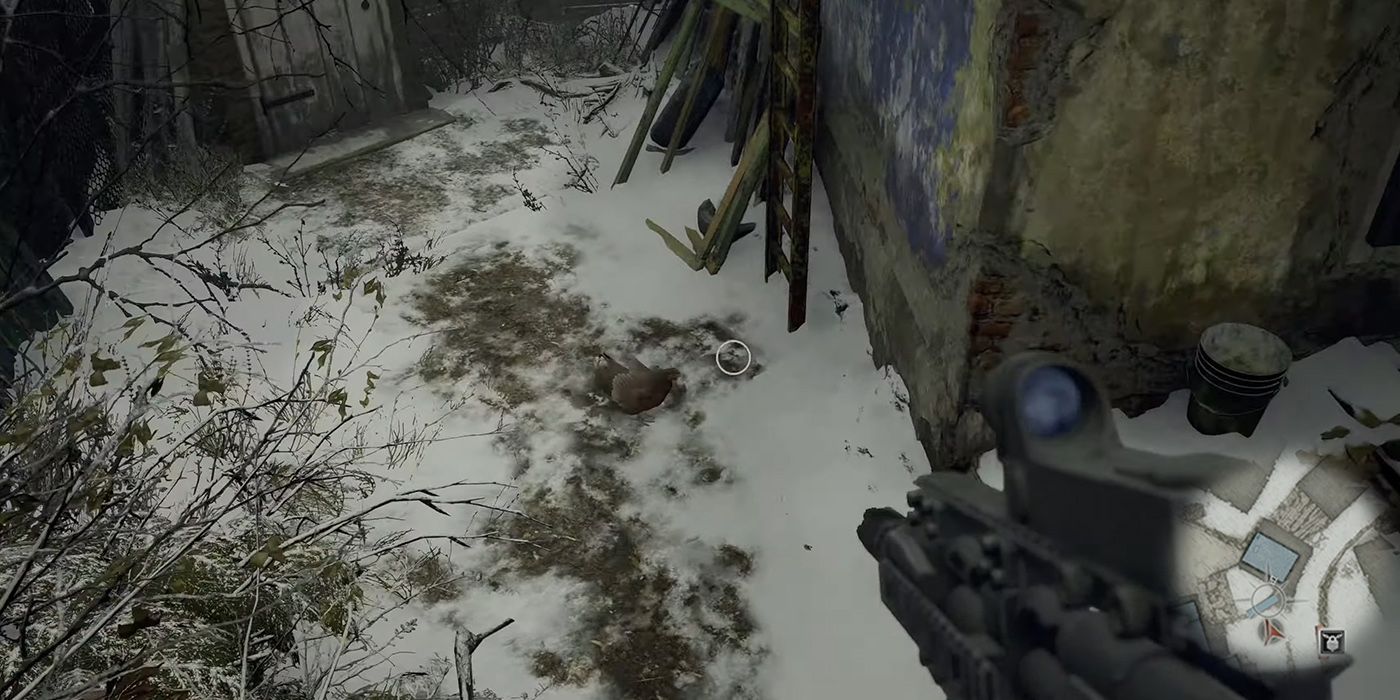 Once you’re able to explore West Old Town again, look around here for an Iron Insignia Door (it should be on the southwest side).

Use the key to open this door, take the ladder up to the roof, then drop down into the yard of the house right next to the Maiden of War to find your first three sources of poultry.

Two Chickens Behind The Iron Insignia Door Next To The Church 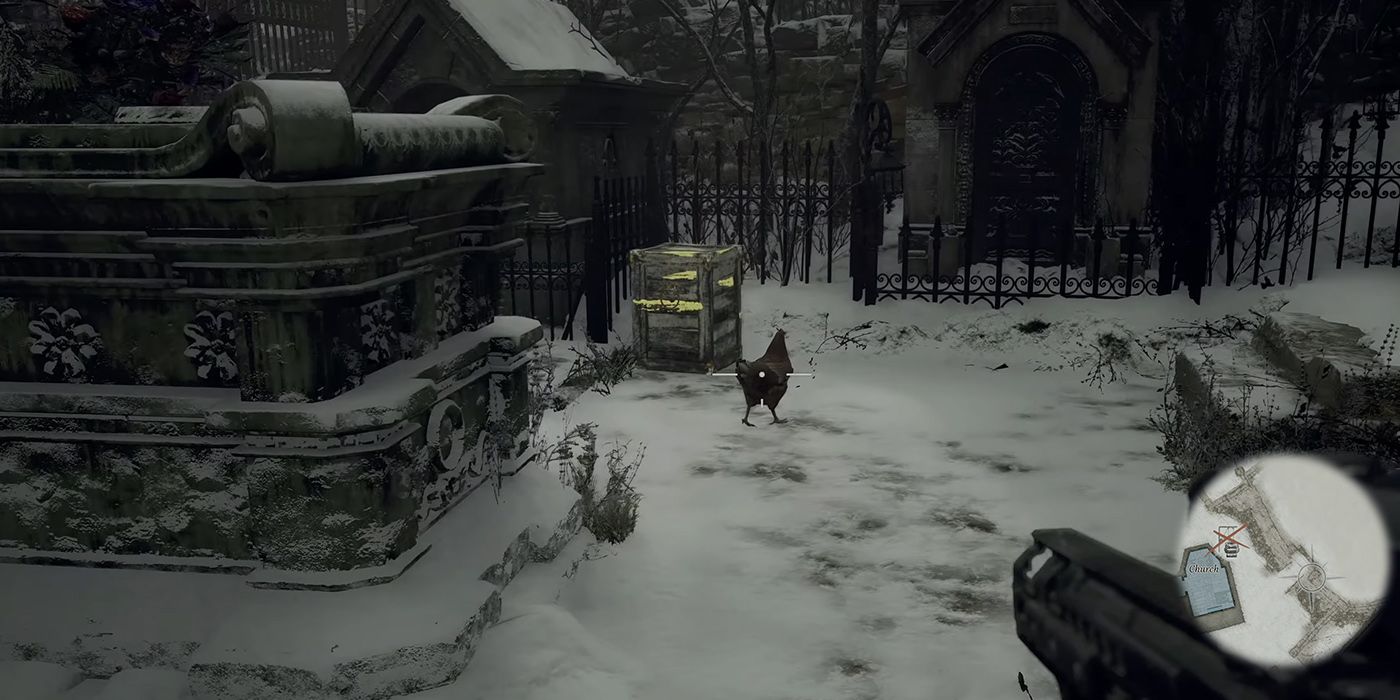 Another bunch of chickens immediately accessible after getting the Iron Insignia Key are found within this little plot of tombs. It’s right behind the Church, directly to the left of the path leading to Fallow Plot. Use the key, head on in, find those two chickens, and be on your way.

Two Chickens Outside The Barn In Fallow Plot 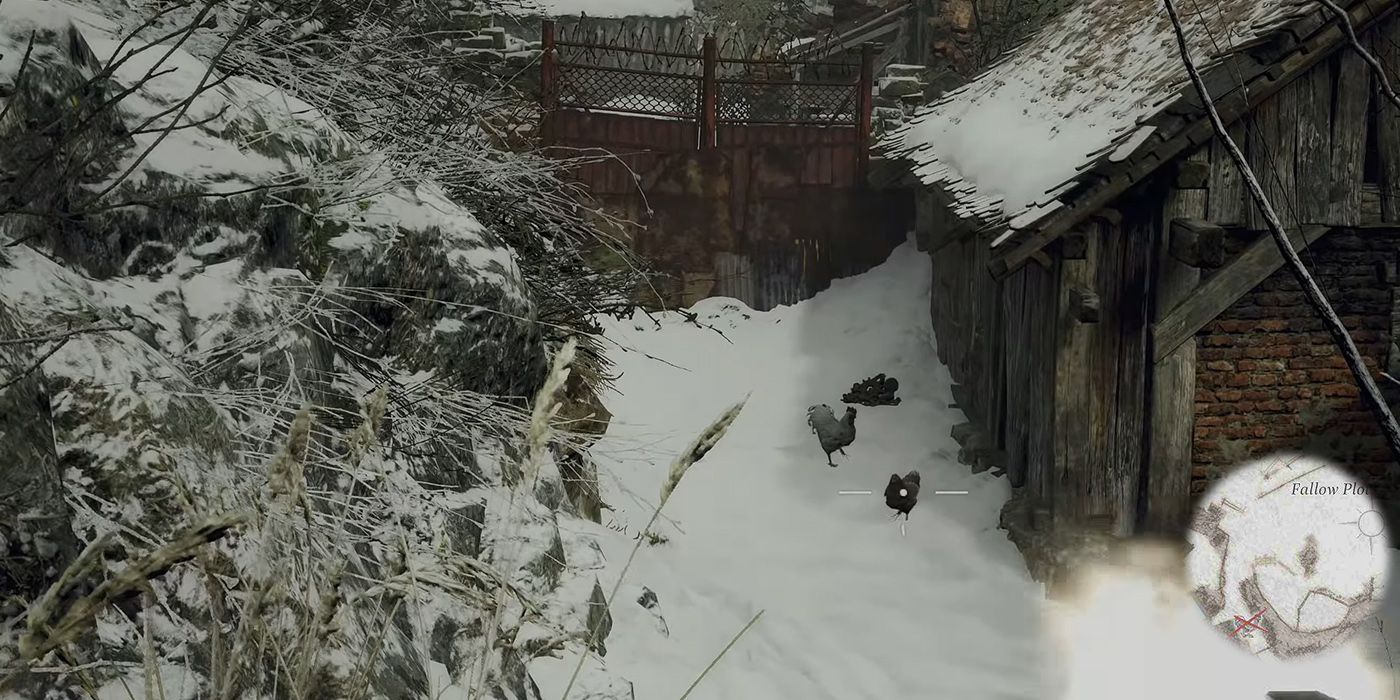 Speaking of the wheatfield that is Fallow Plot, a lot actually happens in this area over the course of the game. Luiza’s house burns down here, you fight one of the Varcolac’s, find the white pig, and can also catch two chickens at the closed-off barn on the righthand side of the field. 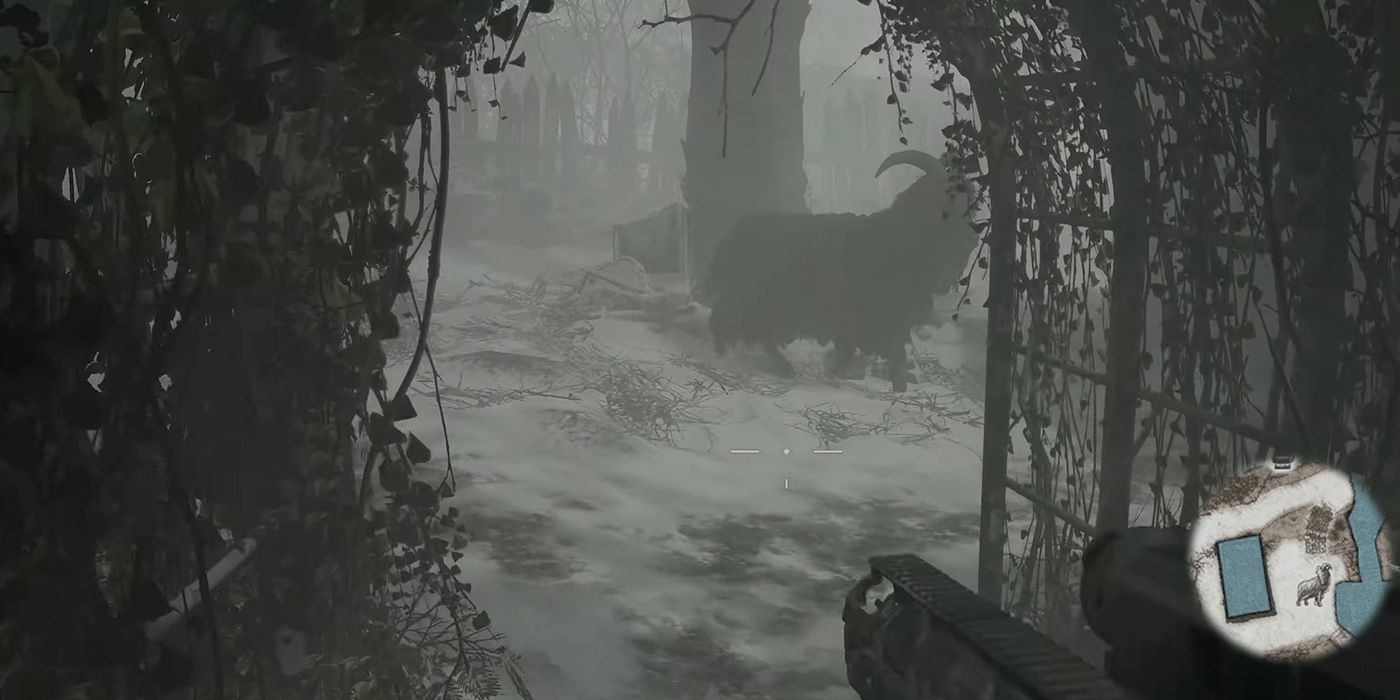 Now, on your first time down this long and winding path to the Beneviento Estate, you won’t find any black goats here. But, after you manage to take out both Donna and Angie, you can backtrack to this area after recuperating in the Village in order to find your first Black Goat.

This one is at the small house on the south side of the path just before Claudia Beneviento’s gravestone treasure.

Two Pigs In The Courtyard Before Moreau’s Laboratory 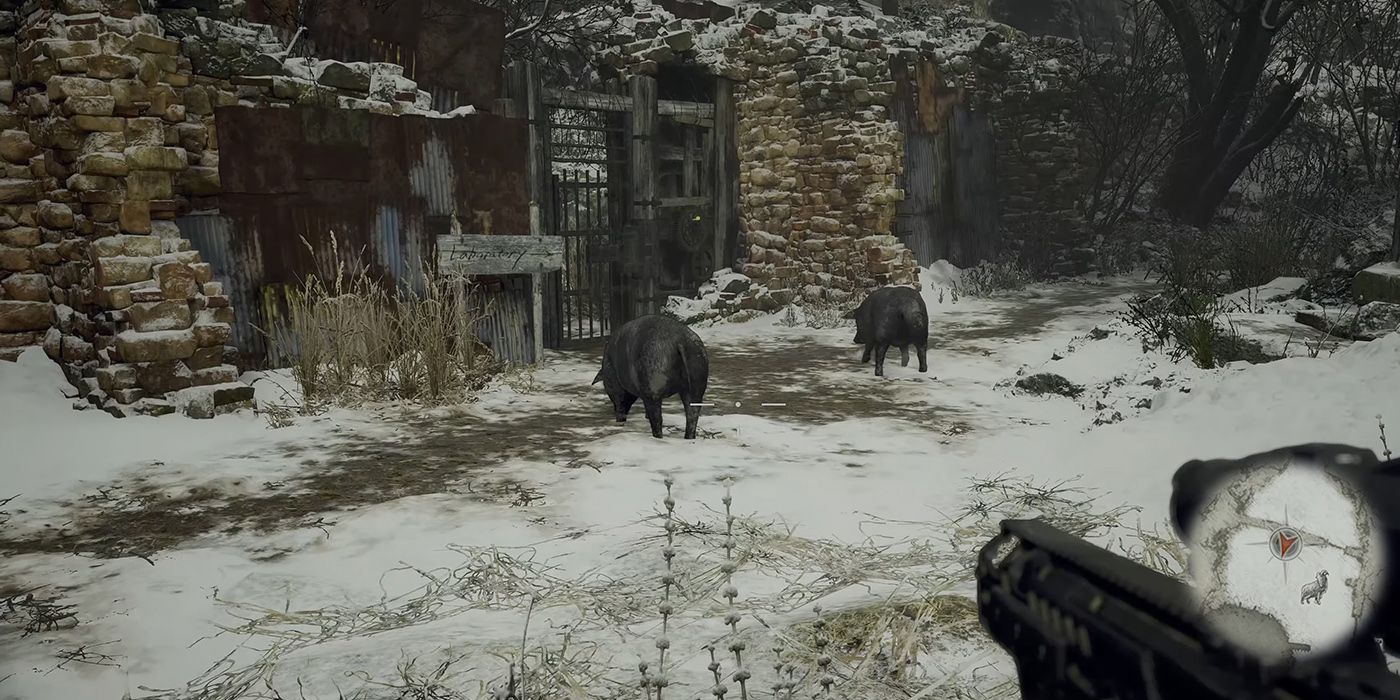 Moving on from the Dollhouse area to where the third lord, Salvatore Moreau is found, these next two pigs are almost impossible to miss. Once you clear the solidified snot/bile/vomit or whatever that gross stuff is from the path leading to the Reservoir, you should see a ladder you’ll need to climb over.

After you land on the other side, you should see a gate that needs a crank, a sign labeled “laboratory,” and these two pigs. 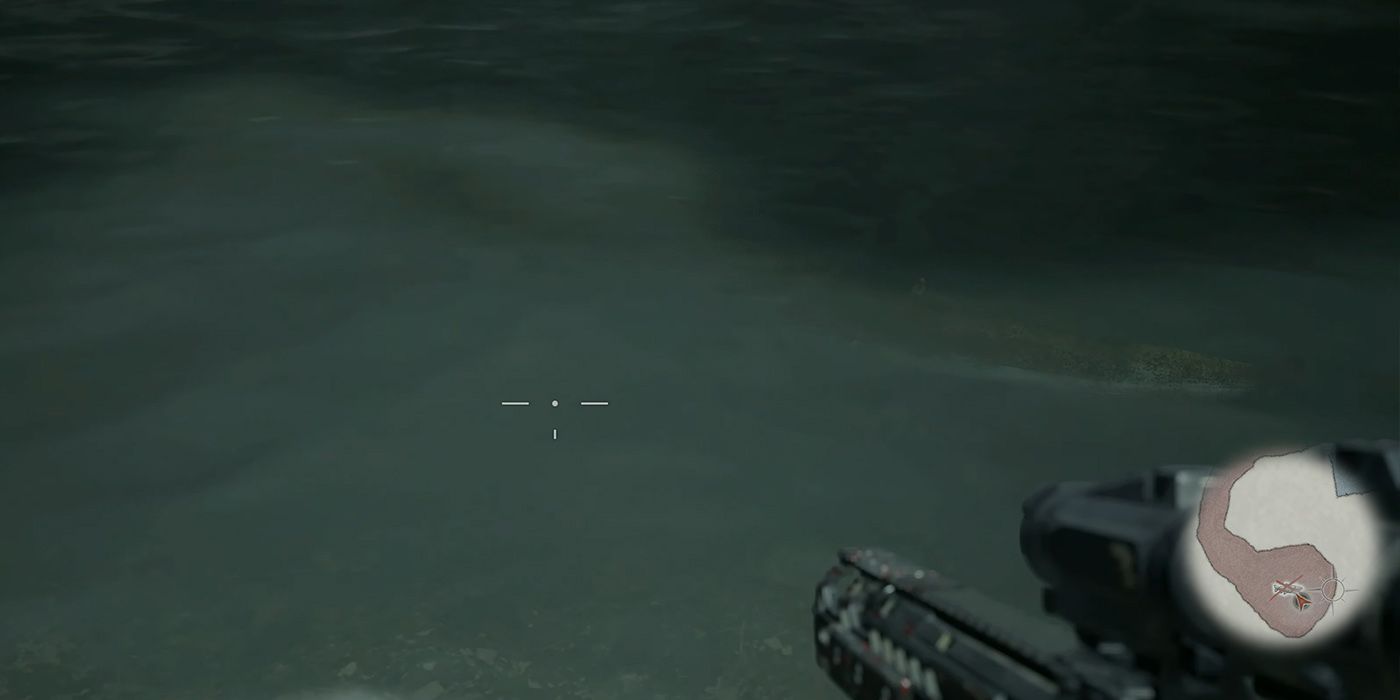 We’ve finally reached some animals in Resident Evil Village that even some seasoned players didn’t know about. Basically, after getting the boat key and heading across the dam (and briefly stumbling across big fish Moreau), you’ll dock at the house that Chris Redfield is waiting for you in. But, before you head up to the door and trigger the cutscene, head immediately to the right and follow this cave around to a rather shallow pool of water.

Look very closely, and you should be able to see what looks like catfish swimming by. There are two of these things in here and each one gives double the amount of fish meat.

Chickens Next To Sluice Controls 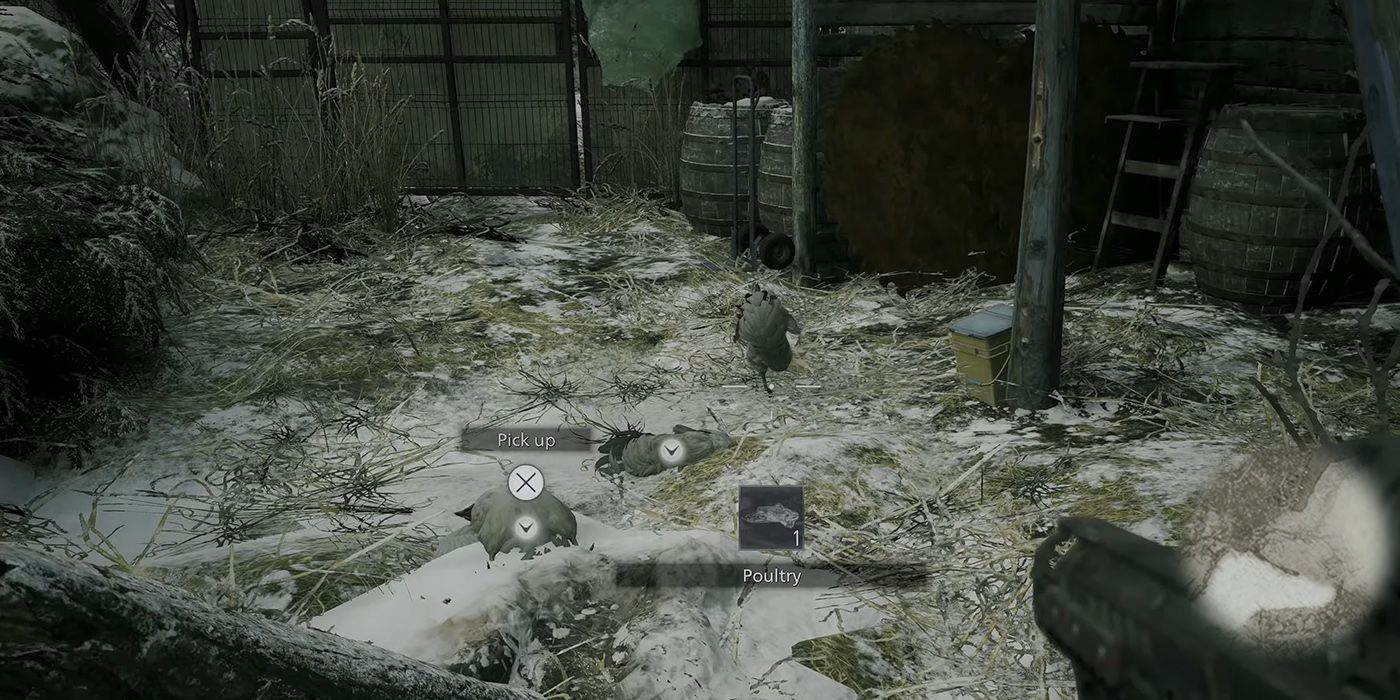 The next animals are incredibly easy to find. Basically, once you get to the sluice gate controls before you even turn the power on, you can find these chickens.

Simply head out the door leading outside and follow the path upward. But, instead of heading into the first windmill, go to your right where the dilapidated cars are. There are three more chickens here, just hanging out.

The Finest Fish And Its Two Normal Fish Friends 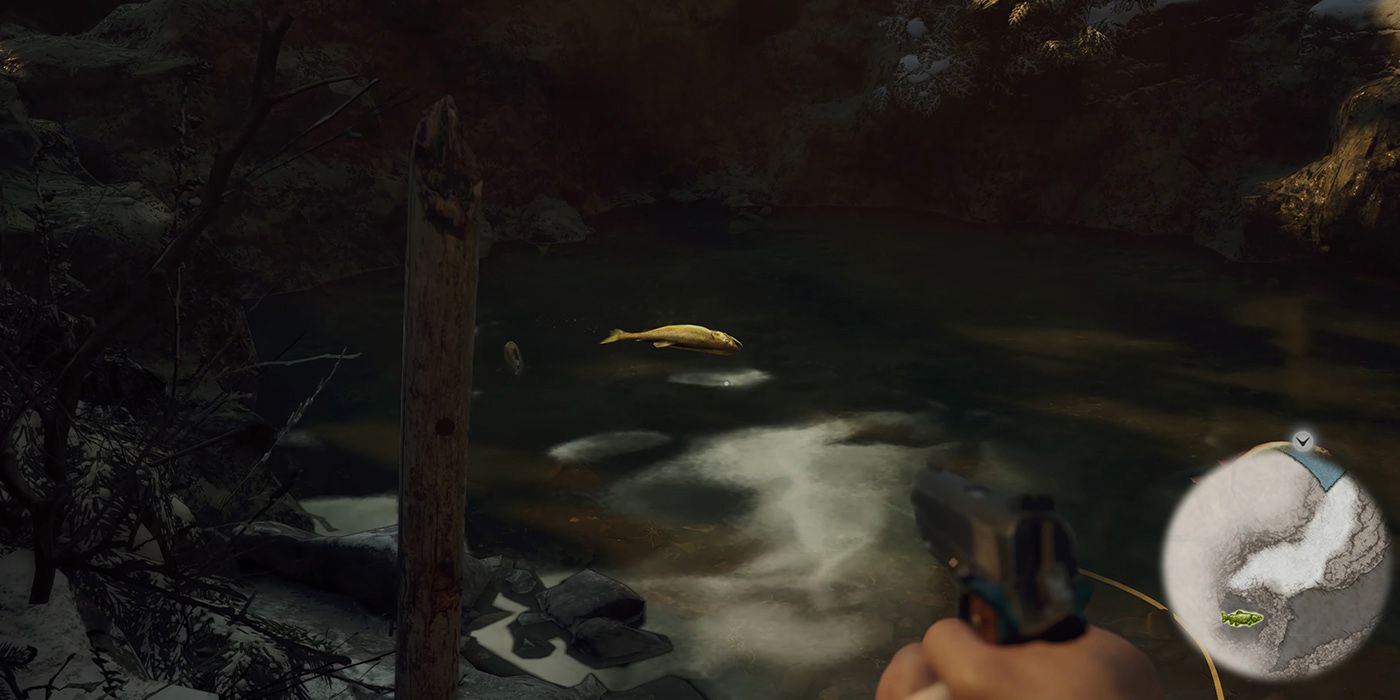 Finally, we’ve reached the last of the three special-type animals, the “finest” fish.

But to summarize in a few words, basically, you just need the crank from the Reservoir area, and you can get to here by taking a boat town the Mountain Stream from the Lone Road bridge. 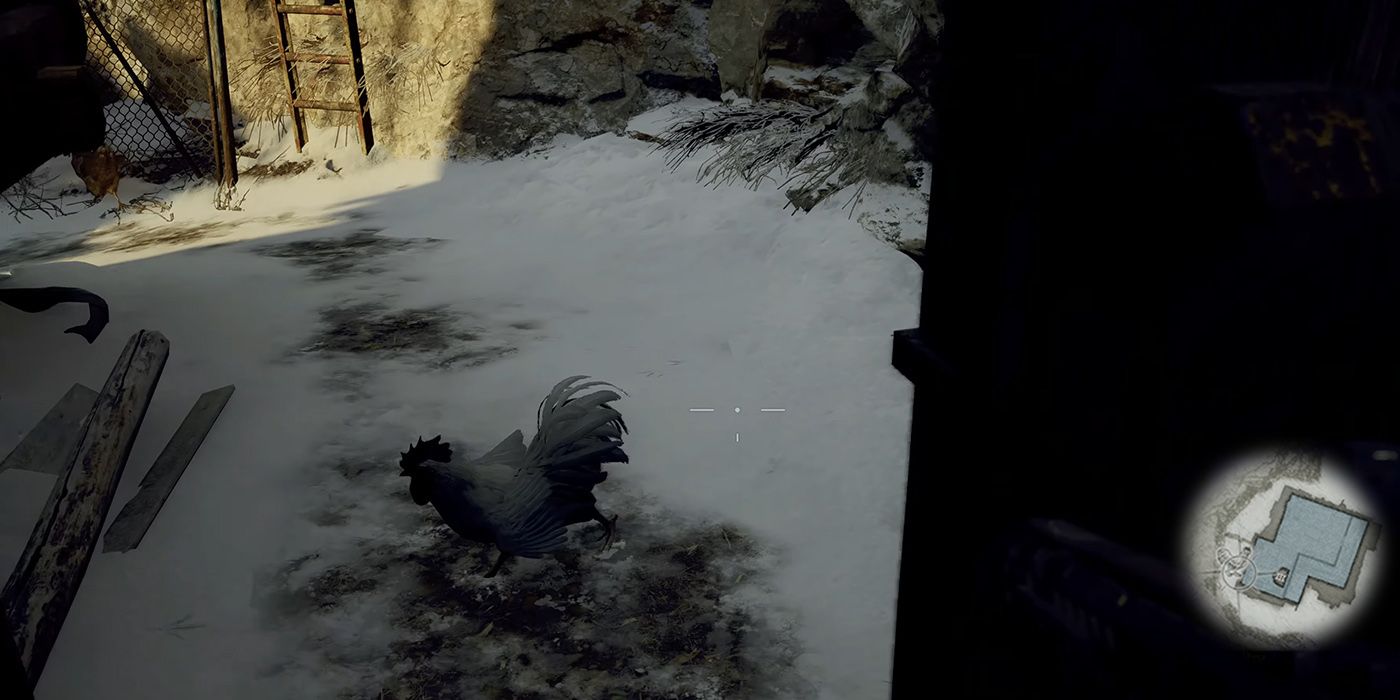 These chickens are hiding behind a gate you could easily just hop over in East Old Town. Sadly, Ethan doesn’t seem very spry, so you’ll need to get the crank first.

If you’re heading into East Old Town from the Altar area, just hug the wall to your right and go past the first house you see leading up. Go around the backside of the second house (the one that had the ladder leading underneath it) and the slot for the crank should be clear to see.

Two Black Goats That Mysteriously Spawn In The Graveyard 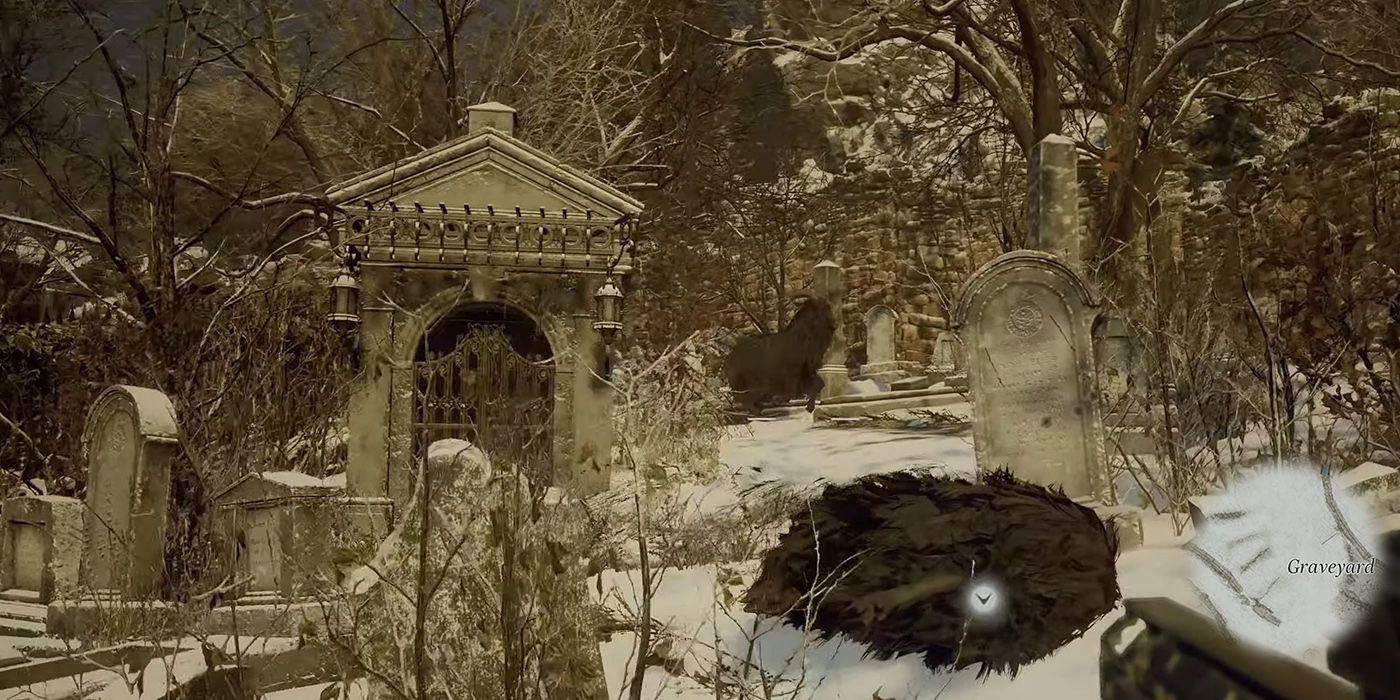 Now, these are likely the easiest animals to find out of all of them, but they don’t appear until after you kill Moreau.

After following Heisenberg’s expertly crafted signs back to the main Altar area of the village, you might notice there are some new residents of the Graveyard: two black goats.

Do this before you head toward Heisenberg’s area of the map, since you sort of get locked into a whole new sequence of events after killing him.

One Pig Outside Of Otto’s Mill 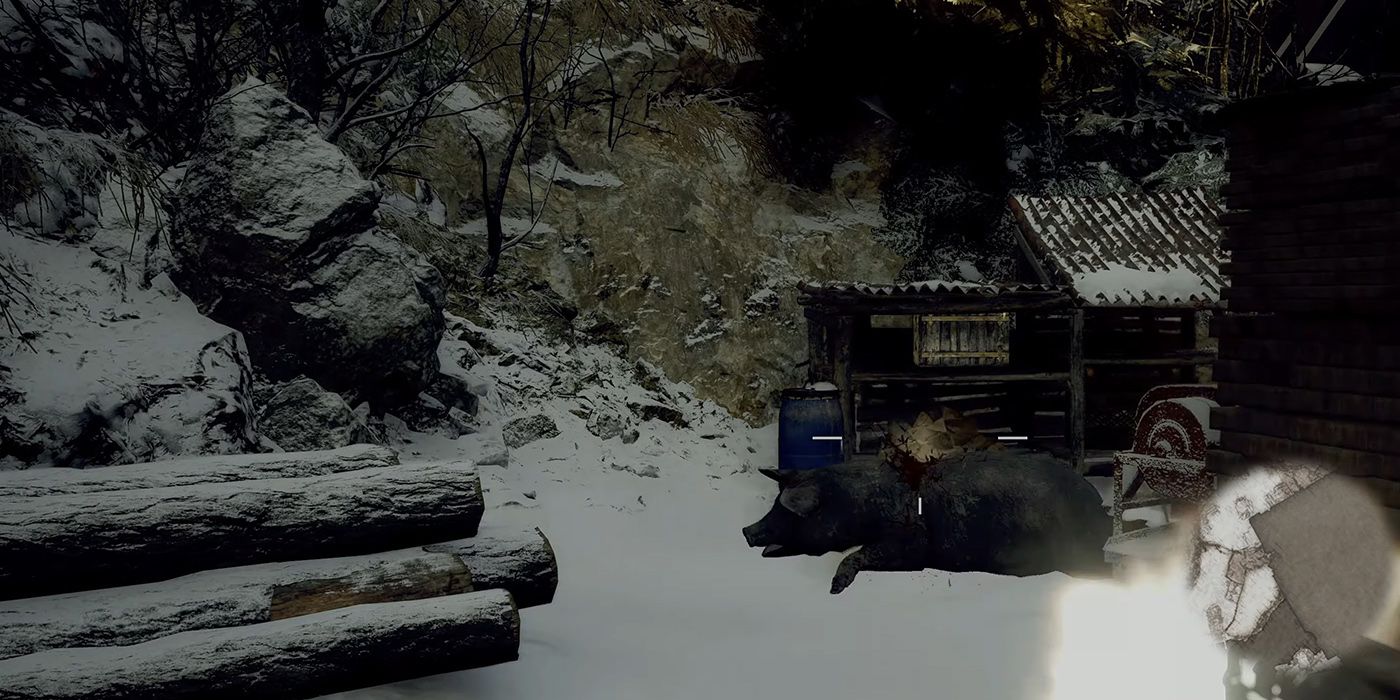 The last two meat locations are actually at the same place: Otto’s Mill, a side area you can reach right before heading up the long staircase leading to the Forbidden Forest and eventually the Lycan Stronghold.

Before you go up these stairs, head directly left and follow that path until you get to a big red building over a small stream. Shoot the lock blocking the entrance, and you should see this pig right away. Why this pig was just hanging out here, anyway?

A Whole Pile Of Meat In Otto’s Mill 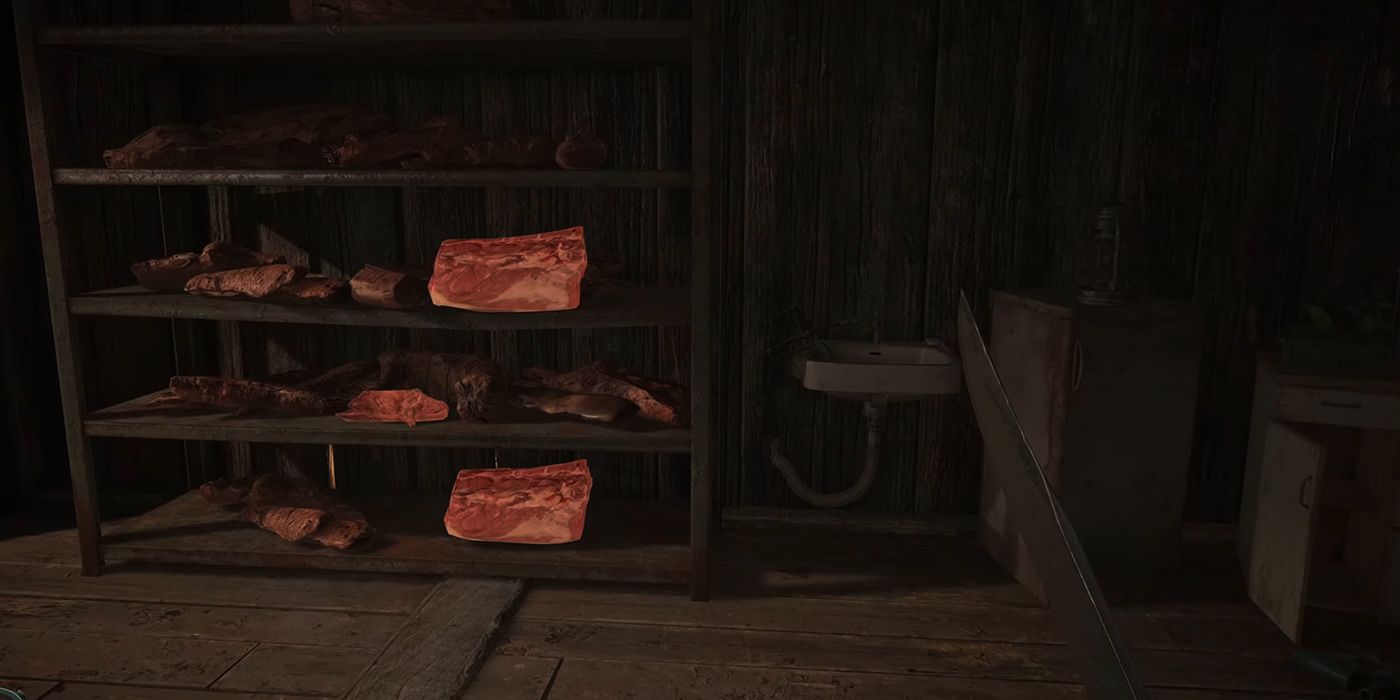 It turns out the Urias Drac or Axe-Wielding Giant hiding in the mill must be attempting a career as a butcher, as he’s hacking away at meat when you sneak up on him in Otto’s Mill. After this grueling mini-boss fight (unless you exploit it using these tips), you should be very tired and almost out of ammo.

But, break the three locks barring the way to the back area of the mill, and open the door to meat paradise. The Urias Drac was keeping a lot of meat back here, including three Meat, one Poultry, and one Fish Meat.