Hello again my fellow travellers. As you may remember, last week my journey through Kanto took me to Vermilion City, probably the most peaceful and joyful destination that we have visited so far, and in which we ripped off not one, but two of the city's friendly residents. Turns out the biggest villain in Pokemon Red & Blue is not Giovanni, but in fact us, and our horrible bratty ways. If you have no idea what I'm talking about, let me fill you in. For the past few months, I have been exploring Kanto as a tourist, visiting a new destination each week, and trying to get a sense of what makes this place so endearing and enduring. After Vermilion, this week it's all aboard the S.S. Anne.

Obviously, no true trip on the S.S. Anne is complete without walking into the truck, trying to shift it with your forehead and sheer force of will. I tried, and much to my surprise, a Mew was under there! However, Mew's Pokemon Blue sprite is an unholy affront to God, so I threw it in the ocean and then got on with my life. Now, let's set sail!

Or rather, let's not. It has been a little while since I played Pokemon Blue, so I had convinced myself that my memory was simply playing a trick on me. As I remembered it, I had got on this luxury cruise liner legitimately, with a ticket I had obtained from a friendly (and not all all horrific) scientist, and then I had gotten off before the ship left the port. This false memory turned out to be decidedly true, which just feels more ludicrous the more I think about it. Getting off after a quick tour might have saved Jack and Rose a lot of trouble, but generally the point of a ticket for a cruise ship is to actually go on the cruise, not just to walk around the ship for a bit. 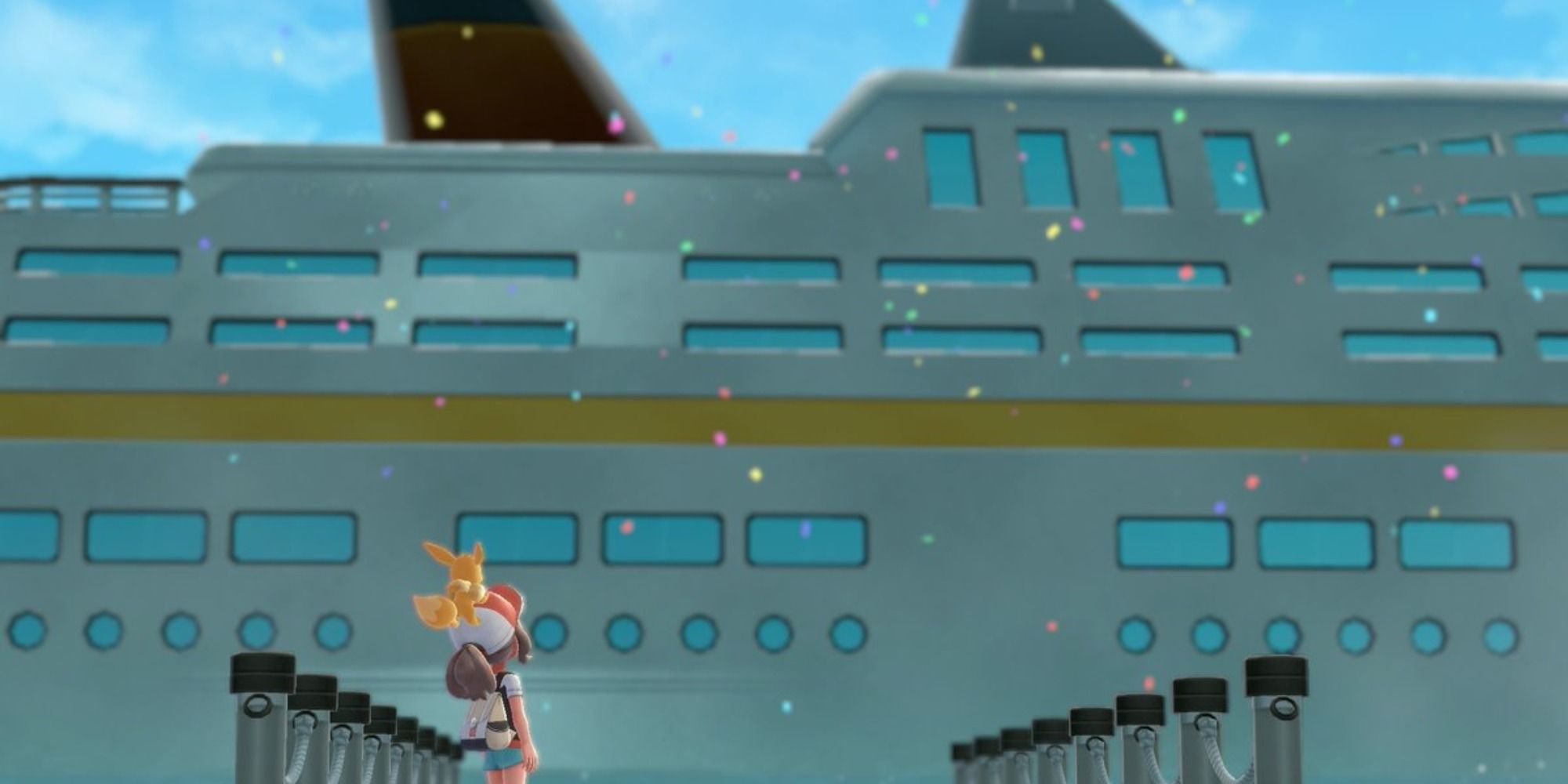 Nevertheless, walk around the ship for a bit is what I did. The whole point of this playthrough is to experience the world of Kanto beyond the gameplay, but the S.S. Anne is just a succession of dull rooms where old men wait to fight you with Growlithe. The only change of pace from this is that you sometimes encounter sailors, who fight with Machop and various Water types. It's just very meh, depressingly so. I remembered the S.S. Anne as a place of grandeur, as Pokemon's Titanic without the sinking. The grand staircases, the chandeliers, the violins, the Kate Winslets. Instead it's just a bunch of very small rooms, with a brief break for you to walk out on deck – we must have been given one of the lower class tickets, so maybe it is a bit like Titanic after all.

This might have been a way for you to project some imagination into the game, thinking of the silhouette of Vermilion disappearing into the fog, and the salty scent of the sea, the vast emptiness of an ocean that reminds us of how trivial our place in the world really is. Instead, we're just floating there in the port with nothing to do. The S.S. Anne has had the biggest glow up so far when I think about the world I have played through on this adventure and the world in Let's Go, so I'm hoping that a few of the upcoming landmarks don't continue to disappoint me. 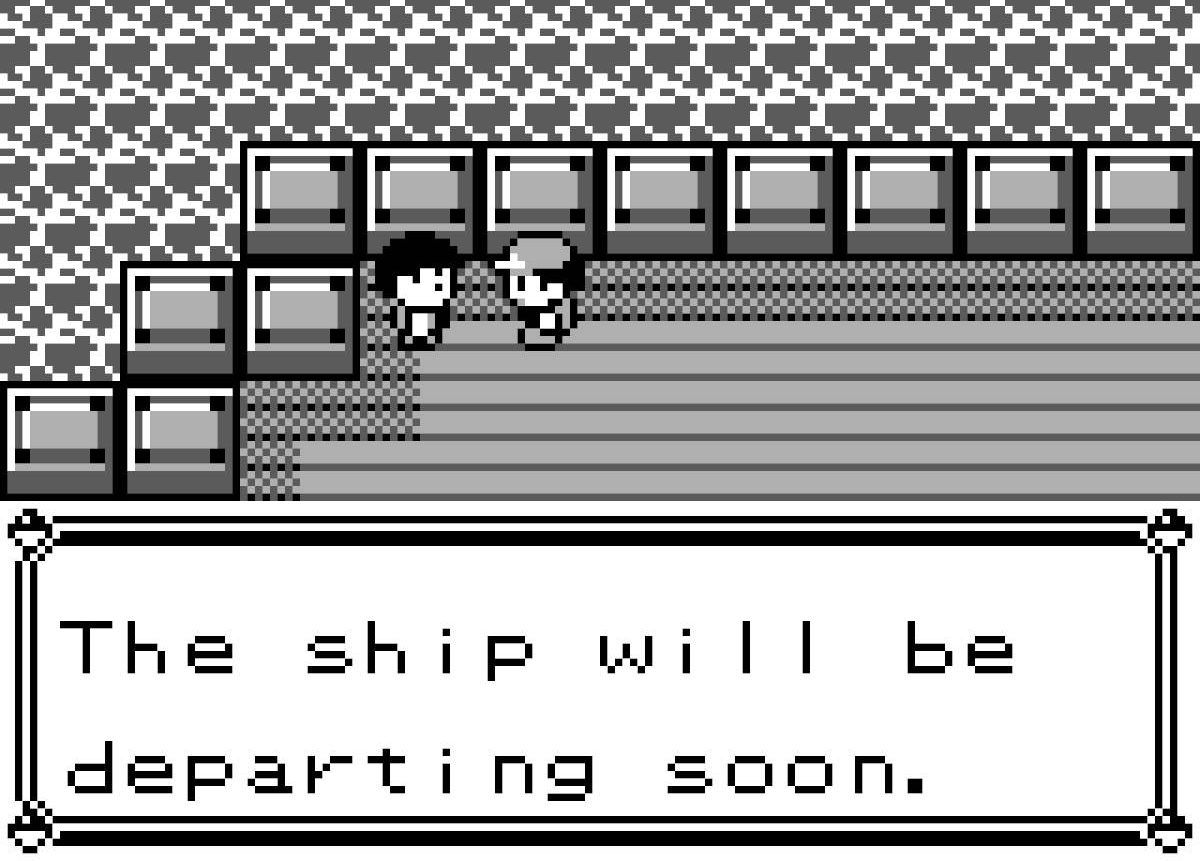 The reason for remaining at port, of course, is that the captain is seasick. It's a pretty decent joke, and our involvement in making him feel better – by simply rubbing his back – is also a fun way to get us into the story that doesn't involve us stealing fossils for no reason. But once he's better, why do we get off? We're ten years old on the adventure of a lifetime, and we have no real cause. The Elite Four doesn't demand that you beat all eight gym leaders in a certain amount of time, Lt. Surge isn't going anywhere, and it's not like we need to save the world or foil any plan. We just want to get gym badges because we like it. We think it's neat. You know what else is neat? A free cruise!

Once we have helped the captain get over his seasickness, we get off the ship and it sets sail immediately, but feels like an incredibly rude hint that the whole seasickness thing was a ploy to get us off the ship because everyone hates us. Anyway, next week we'll be exploring Diglett's Cave and the Rock Tunnel, and not enjoying a free cruise, for some reason.