Roblox CEO Dave Baszucki wants to inhabit the metaverse — an online place where we work and play and entertain ourselves. He has dreamed about it for a long time, and he has so many followers now that Roblox will likely be one of the most credible candidates for building the metaverse, the universe of virtual worlds that are all interconnected, like in novels such as Snow Crash and Ready Player One.

Roblox has 36 million people who come back daily to play on the platform. That makes the company one of the lead horses to move on to the next generation of technology. And Baszucki is a big fan of getting his own users to do the work.

“People do everything from playing traditional games, to social experiences that are more around hanging out and just being together whether it’s working together in a restaurant or running away from a tornado,” Baszucki said. “And in the midst of this very difficult time, we’ve seen a lot of people using Roblox as a way to stay connected, whether it’s trying to have a birthday party, or how do we graduate from high school.”

Baszucki’s company is planning to go public soon through a direct listing offering, and Baszucki isn’t able to talk about the latest financial details now. But Roblox has built a big war chest, raising $520 million in private capital at a $29.5 billion valuation earlier this month. It can use that money to build the metaverse and populate it with things that the users created.

Since Roblox focuses on user-generated content, Baszucki doesn’t think his team will create the metaverse. His users will. 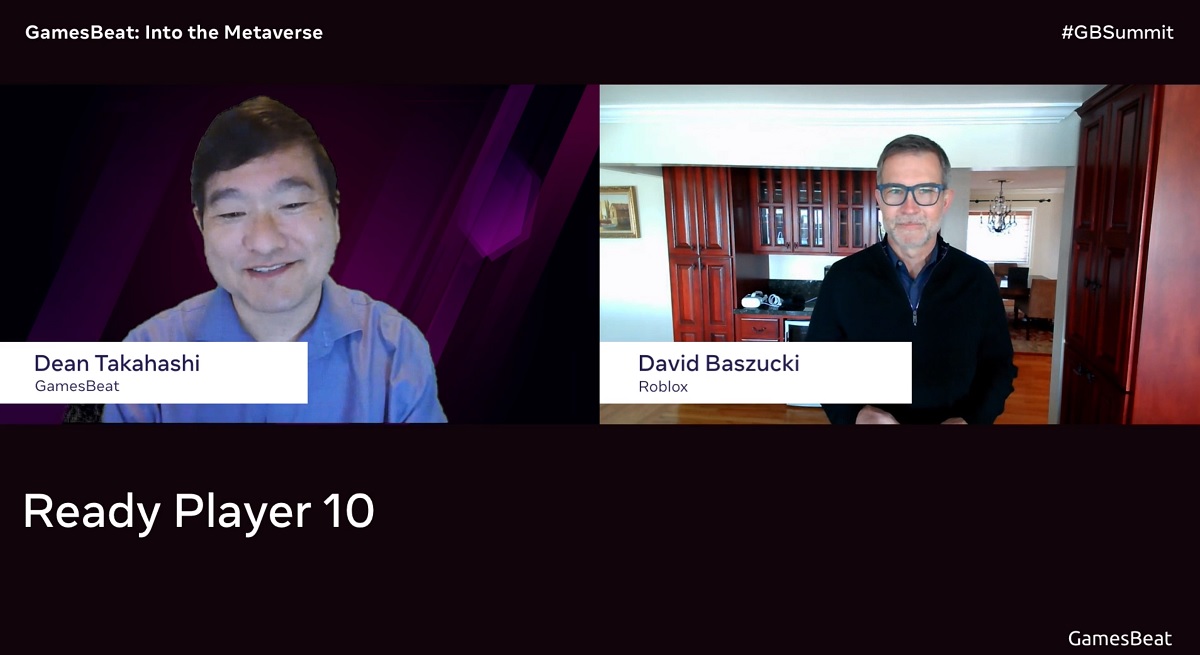 Above: Roblox CEO Dave Baszucki (right) speaks with Dean Takahashi of GamesBeat at Into the Metaverse.

“We think of ourselves as shepherds of this idea. But it’s an idea that’s been around for a long time,” he said. “Our founding story goes way back to a prior company, Knowledge Revolution, where my Roblox cofounder Eric [Cassel] and I were building educational software to help people figure out how to understand physics experiments. And in the process of watching lots and lots of students use interactive physics, we saw that in addition to doing their physics homework, they were building stuff and creating stuff and watching what would happen when a car ran into a building. This kind of germinated the idea.”

That origin is not so different from what Nvidia is doing today with its Omniverse physics simulation world, which is a kind of metaverse for engineers. (Richard Kerris of Nvidia will speak about that on Day Three of our event). Nvidia’s focus, however, is hyper-realistic.

“Our hope is the metaverse doesn’t just look like reality,” Baszucki said. “It feels like reality so that the cars in the metaverse have engines and they have axles and they have wheels. When the wheel falls off the car, the car does what we would expect in real life. So part of this hope of a physically driven metaverse is actually easier to program and easier to create emergent behavior because it kind of works like we expect.”

He added, “We’ve all lost ourselves in a Pixar movie that is very high-quality rendering but it is not photorealistic rendering.”

The eight features of the metaverse 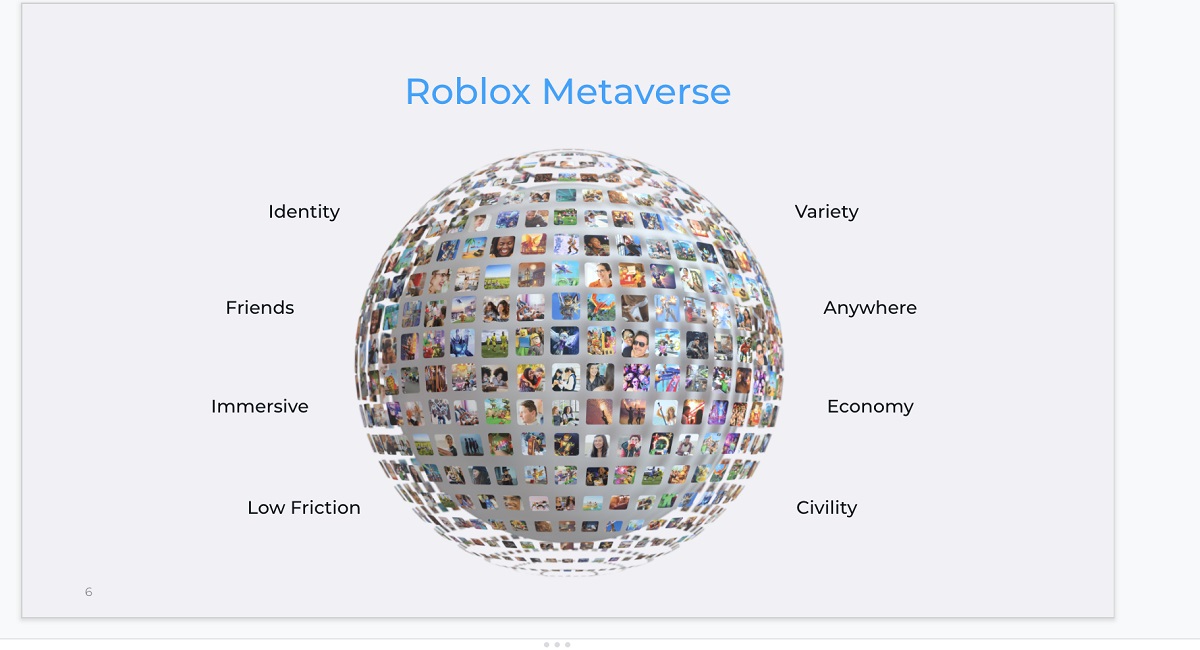 Above: How to make a metaverse

The true metaverse will have something like eight different characteristics, Baszucki said. You have to have an avatar with a virtual identity. You can be everything from a rock star to a fashion model, and that’s one big draw of the metaverse.

You can make friends with real people and socialize in the metaverse. It has to be “immersive,” or make you feel like you’re somewhere else and you lose your sense of reality. You should be able to log in from anywhere, regardless of the country or culture where you come from. You need a low-latency connection, whether you’re at a school or a business.

The metaverse has to have low friction, meaning you can go anywhere instantly. If you’re studying ancient Rome at school, you should be able to transport yourself there within a second and take a tour with your class. It has to have a variety of content to support the long tail of interests people have. You need a vibrant economy to ensure that people can make a living in the metaverse — not just coders but artists and designers too. And finally, you need safety and stability, so that people can come together and improve digital civility.

Ready Player One and Two 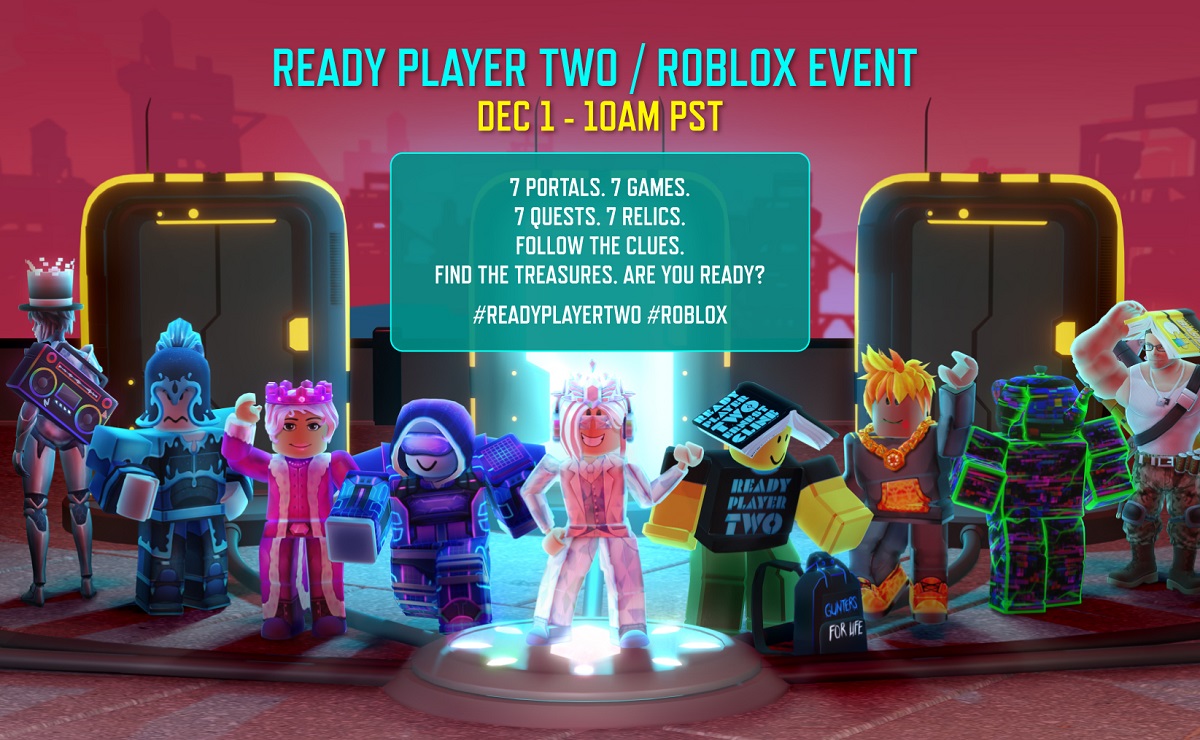 Above: Roblox will hold events related to Ready Player Two by Ernest Cline.

Baszucki has done a couple of events with Ernest Cline, the author of Ready Player One and Ready Player Two. I asked Baszucki if he identified with the characters in the book who created the Oasis, or the book’s version of the metaverse. The founders of the Oasis in the book are Ogden Morrow and James Halliday.

“When Ready Player One came out, I sent it to all the executives in the company because it was capturing not just societal changes but what I thought were visionary technologies that we were going to see play out as these platforms got better,” Baszucki said. “We really try to fade into the background. So I’m not sure either one of those characters applies to us. We don’t make any content. We actually don’t have control of the content. We try to make really good technology and tools and a platform. And then we get amazed by the content.”

He added, “We almost see ourselves more as the creators of a primitive part of the electrical grid, back there in the distance, and we’re trying to more and more highlight the creative genius of our creator community, which is really the real engine that works with us to power our part of the metaverse.”

Baszucki compares what Roblox is doing to the invention of the printing press. The tech was so new that some philosophers at the time felt that people started reading too much. Over time, the culture came to accept book reading. Video went through the same cycle, as are games now. I joked that parents will one day tell their kids to stop reading and go back into Roblox to learn something. 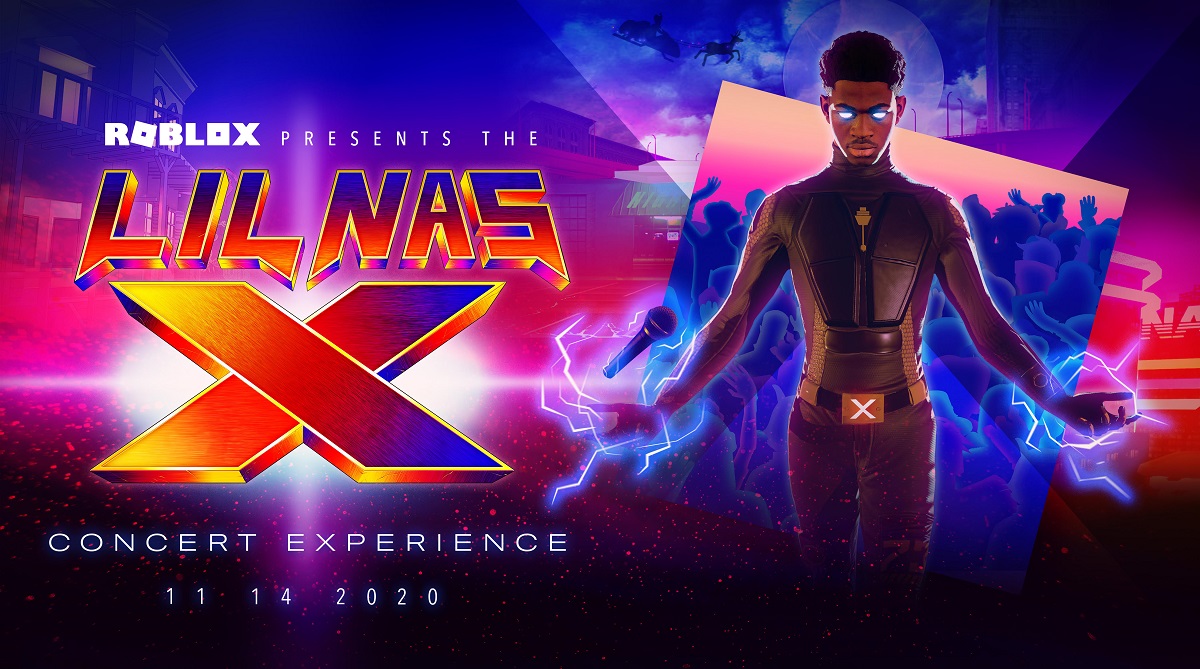 Above: Lil Nas X in a Roblox experience

“People will know they have a physical identity and a digital identity,” he said. “Just as people that are very facile with books and videos and balancing them, we’re optimistic they will be with the metaverse as well. We’re not so dystopian in our vision relative to maybe some science fiction. We think people will be able to balance this and use it in a positive way. We think it will be an integral part of learning and working. Just another tool side by side with video and books and other forms of communication.”

Amid the pandemic, Baszucki said he has enjoyed seeing experiments on Roblox like concerts and parties that enable people to enjoy each other while social distanced.

“We’re hopeful that there are many situations where immersive 3D communication can bring people together, where it’s very difficult when they’re forced to be at a distance,” he said. “An example would be our Roblox holiday party, which we did in Roblox with hundreds and hundreds of people. And because they were all employees, we were able to do the things we might do at a holiday party. I wish we could have been together physically. But we did have a nightclub. We did have a stage, wedid have a bar.”

Quality has its own way of rising to the top. But the company has to spend a lot more time making sure the place is civil. More than 1,700 trust and safety volunteers ensure that Roblox is a safe and stable world for players.

“We don’t in any way filter on quality, but we have incredibly polished experiences that tend to do better,” he said. “We try to build systems that bubble up interesting things. We don’t really know what is high quality – if it’s safe and civil our Roblox community will vote with their feed and with their engagement and say this is interesting.”

User-generated content rules on Roblox, and many young developers are starting to become entrepreneurs, forming teams or even studios focused on Roblox games. Hundreds of thousands are making interesting content, and more than 1,000 are making $10,000 or more and 250 are making more than $100,000. Those people are working alongside big brands that are making their own games for the platform.

The advances that will lead us to the metaverse are inexorable, Baszucki aid, as bandwidth, mobile devices, and other technologies improve.

Roblox has 830 employees, but Baszucki said it will need a diverse group of people to fill out its team to build the metaverse, with experts ranging from 3D game engines to corporate civility.

Baszucki believes that, if done right, the metaverse will make the world a better place by increasing the civility of the world.

“The way we moderate, the way we nudge, the way we encourage civil discourse on the platform — I’m optimistic we’ll be able to measure the general civility of society by watching what’s happening on this platform,” he said. “I’m also excited that at various ages, there will be various levels of appropriate nudging. There will be the ability to have people with very different viewpoints pop a little out of maybe the bubble they have and safely meet people with very different viewpoints and have a civil discussion with them.” 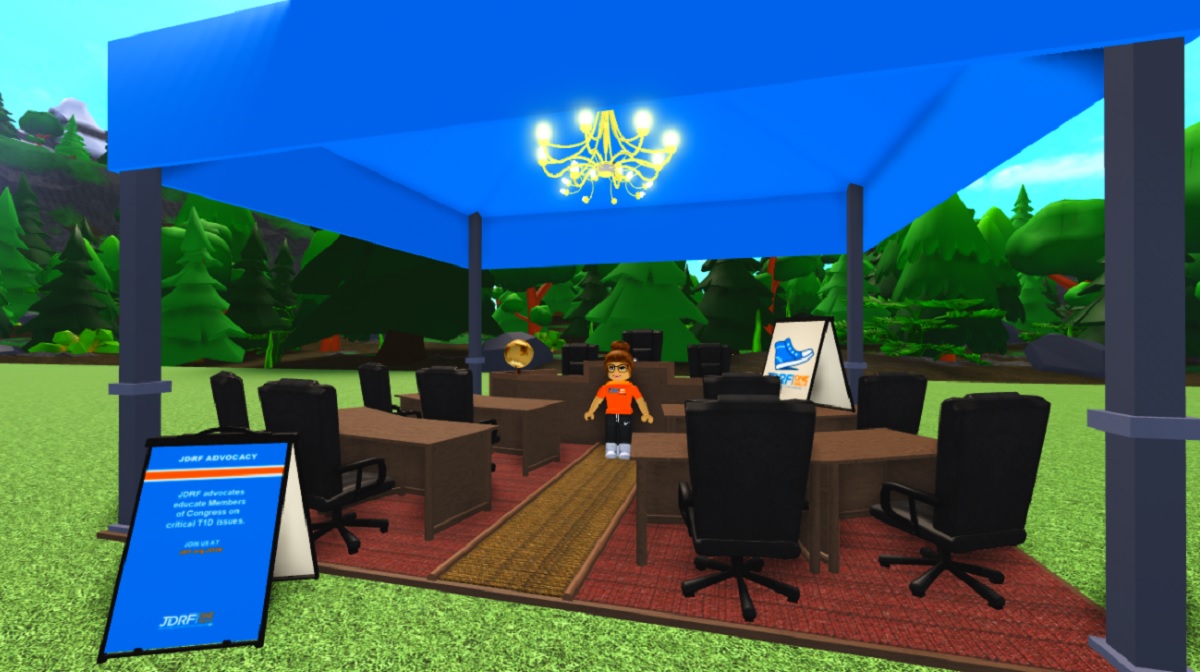 Above: Part of the JDRF world inside Roblox.

I also asked Baszucki if the metaverse is the place where we’ll achieve digital immortality, as happens in the Ready Player Two novel.

“This is such an enormous thing to think about. I think it goes way beyond the medical. It’s a whole separate industry right there,” Baszucki said. “I do think over time the metaverse will be this wonderful place where [non-player characters] NPCs improve. We’ll see the Turing test happen not just through text and voice, but we’ll see the Turing test happen in the metaverse. We’ll start to see NPCs that are harder and harder to distinguish from people over time. And this may be the foreshadowing to ultimately immortality. There may be forms of immortality that are a rough approximation of you and me. So I could imagine if you and I wore a device for our whole life that recorded everything we saw and everything we said, machine learning might be able to create an approximation of us that could live. But I’m not so sure. I think it’s gonna be a while before we can snapshot every neuron and build that out.”

So if you had to think of one, one thing you want to do in the metaverse, so what would that be?

Asked what he wants to do in the metaverse, Baszucki said his first thought was boring: just hang out with people that he knows in a social setting.

“I think I want to have that ability to come together with people I’ve been missing for a really, really long time.”

He also wants to play a game in a virtual junkyard with friends, or two teams of five. They would build a crazy contraption with welding torches and drills and other gear, and then they would compete with each other using their contraptions.

“It’s all about the complexity of the physics and the interaction and emergent behavior,” Baszucki said. “These kinds of things are exciting to me.”