Rollerdrome is a slick new game from Roll7 that is one part Tony Hawk’s Pro Skater and one part The Running Man. This fast-paced kill sport is packed to the gills with nuanced elements. When played at its full potential, Rollerdrome feels like ballet with bullets. However, when you are starting off, it is a touch messier than that.

While the game does provide some key tutorialization, the difficulty can ramp up pretty fast and there are a ton of elements that aren't fully explained to the player. This guide will make sure you spend your time rolling gracefully while shooting your guns, and less time treading water. 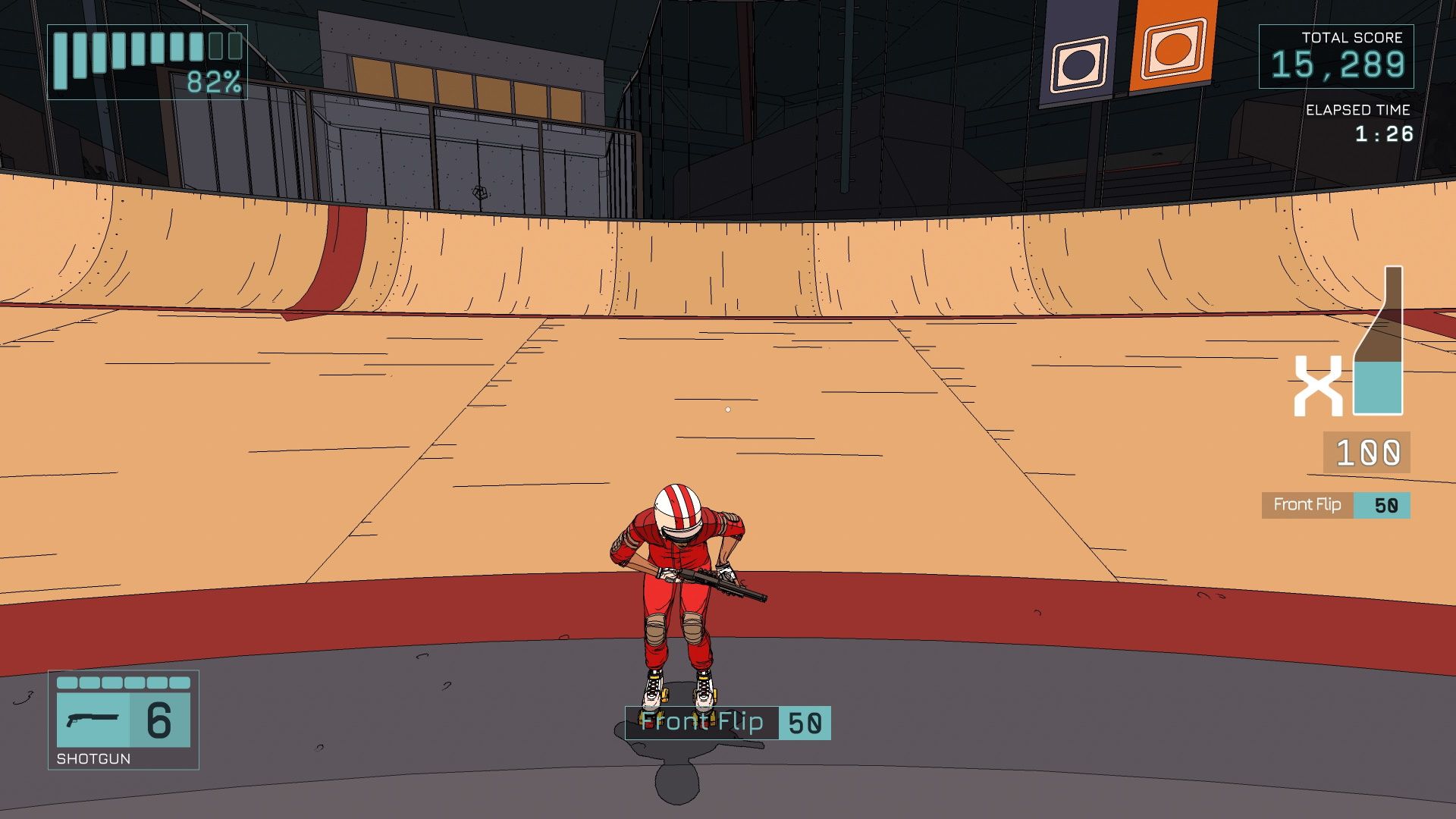 One of the things that people new to the game are probably going to struggle with is how your momentum carries you. When you hop over an enemy, switch direction midair to shoot them, and land, your momentum is still going to take you to the same place you would have been going had you not turned around in the air. Thus, you will frequently find yourself blazing a trail with your back to the ramp, which can feel unnatural and a little unsettling at first.

However, relax, you will naturally swivel around in a second or so. Also, if you find that you absolutely need to change the direction in which you are traveling, your dodge roll will allow you to accomplish that. At first, you may feel like you are completely out of control, but the truth is you have every tool you could possibly need to go wherever you want to.

Get The Most Out Of Your Tricks 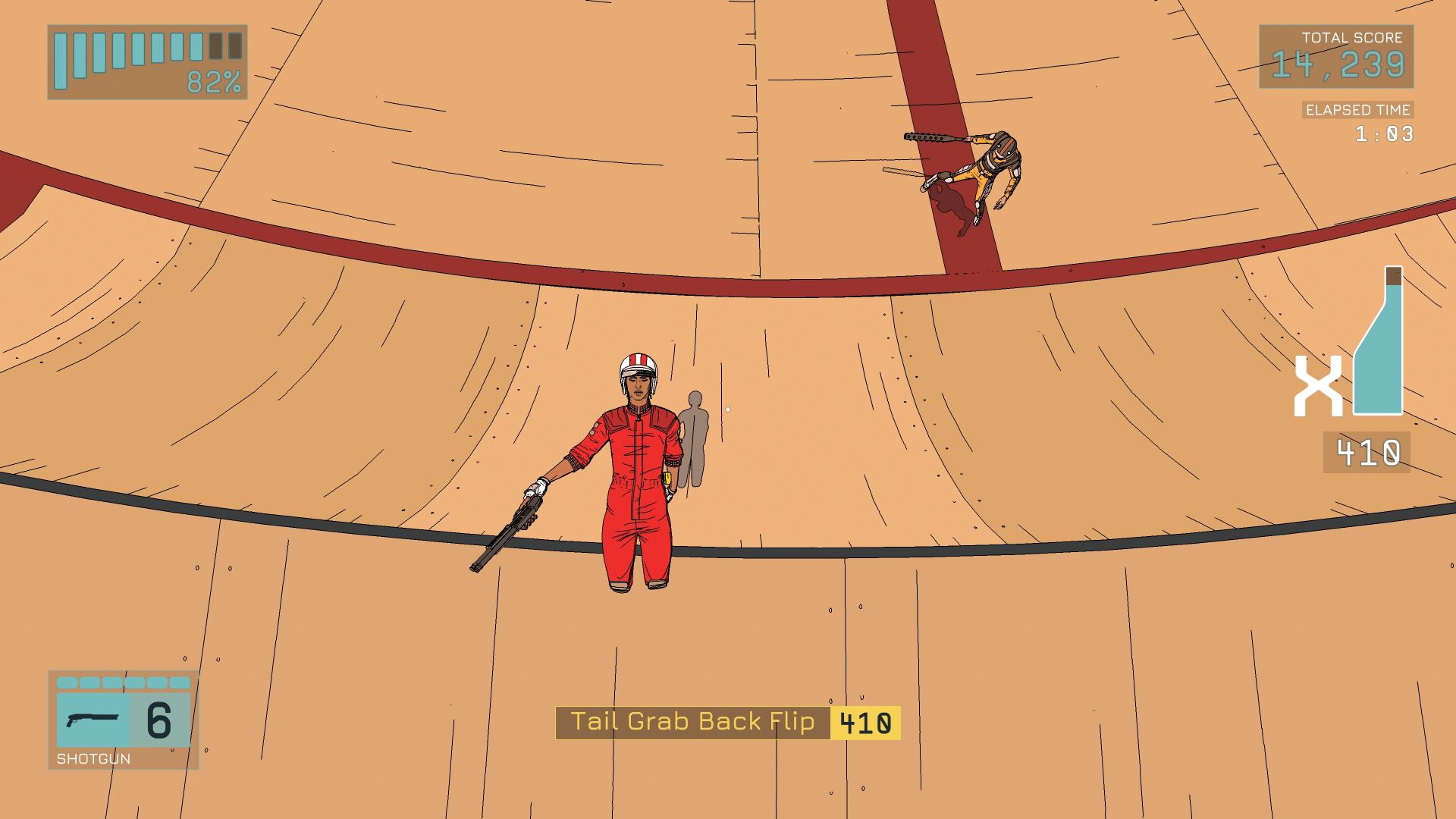 Look, we know, Tony Hawk’s Pro Skater taught everyone that you need to know when to prepare to land your trick. But Rollerdrome isn't THPS. There is no way to "fail" a trick. You can't crash into the ground. So, hold the trick all the way down to the ground to get as many points as possible out of it (preferably while spinning).

On the other hand, grinding tricks do have a point cap. They will only earn you points up until they hit that cap. Once they hit it, you should transition into another grab by hopping up and inputting another direction and the grab button (this is best done during a straightaway). Of course, don't do this if your combo is in danger of expiring (instead, get a kill then switch your grind trick). 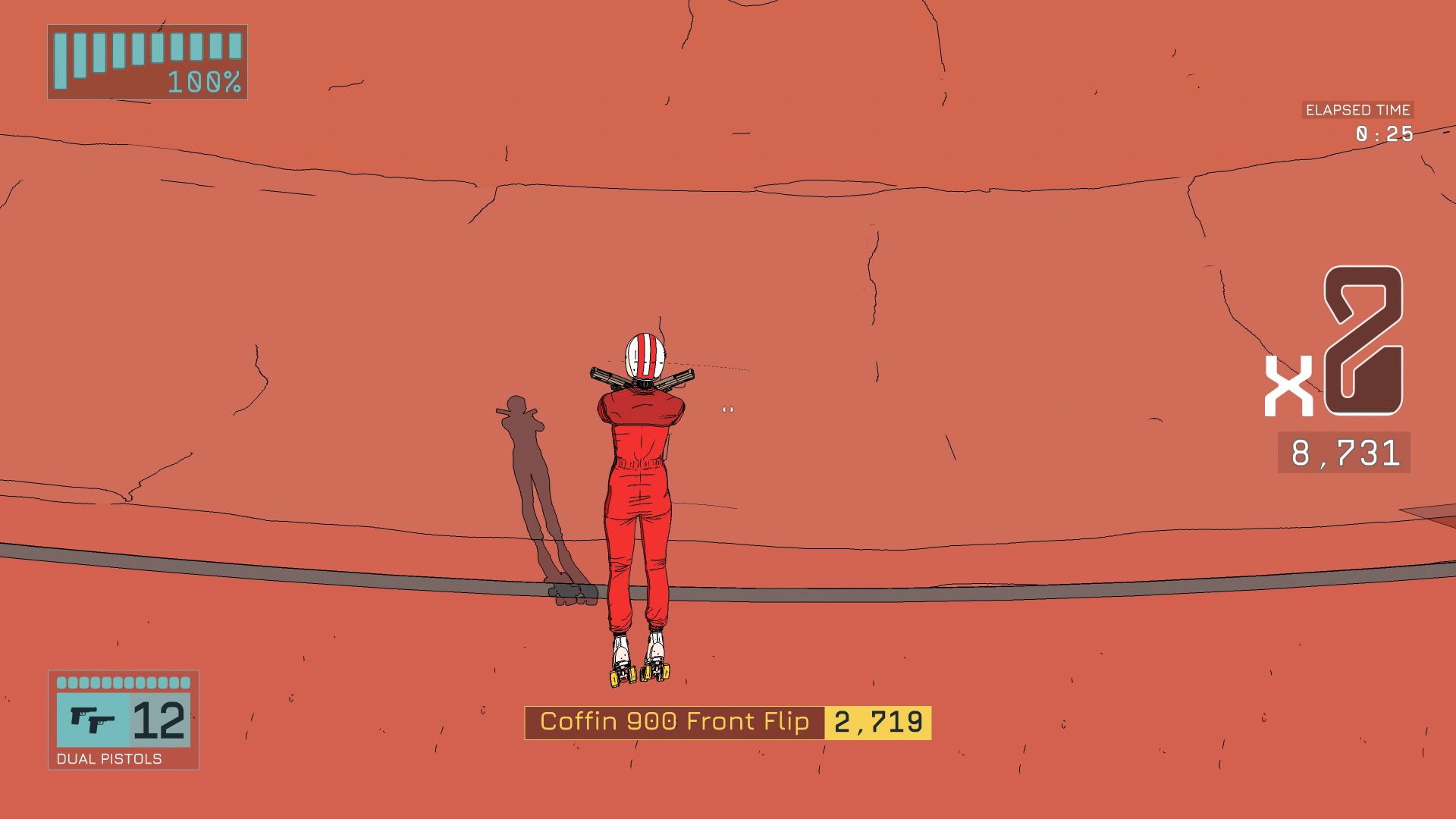 This is the easiest place you are going to lose points. Tricks will decrease in value the more often you use them. So, you should be trying to keep track of which tricks you have already used. It is also worth noting that not all tricks are equally valuable. Certain tricks will get you more points than others. You will have to learn which of these is the most valuable, but we have found that the tricks that require more than one directional button input tend to yield more points.

This is one of those easier-said-than-done pieces of advice, as keeping track of what tricks you have already done can require a lot of mental energy when you are battling dozens of people trying to kill you. So, what you may find to be helpful is to have a rotation. Up and grab for your first trick, right and grab for your second, down and grab for your third… You get the idea. After you rotate through the single input tricks, you can move on to the double input tricks. The color of the text will inform you of how many times you have performed those tricks. If the text is golden then that trick is fresh, if the text is grey then you have overused it. 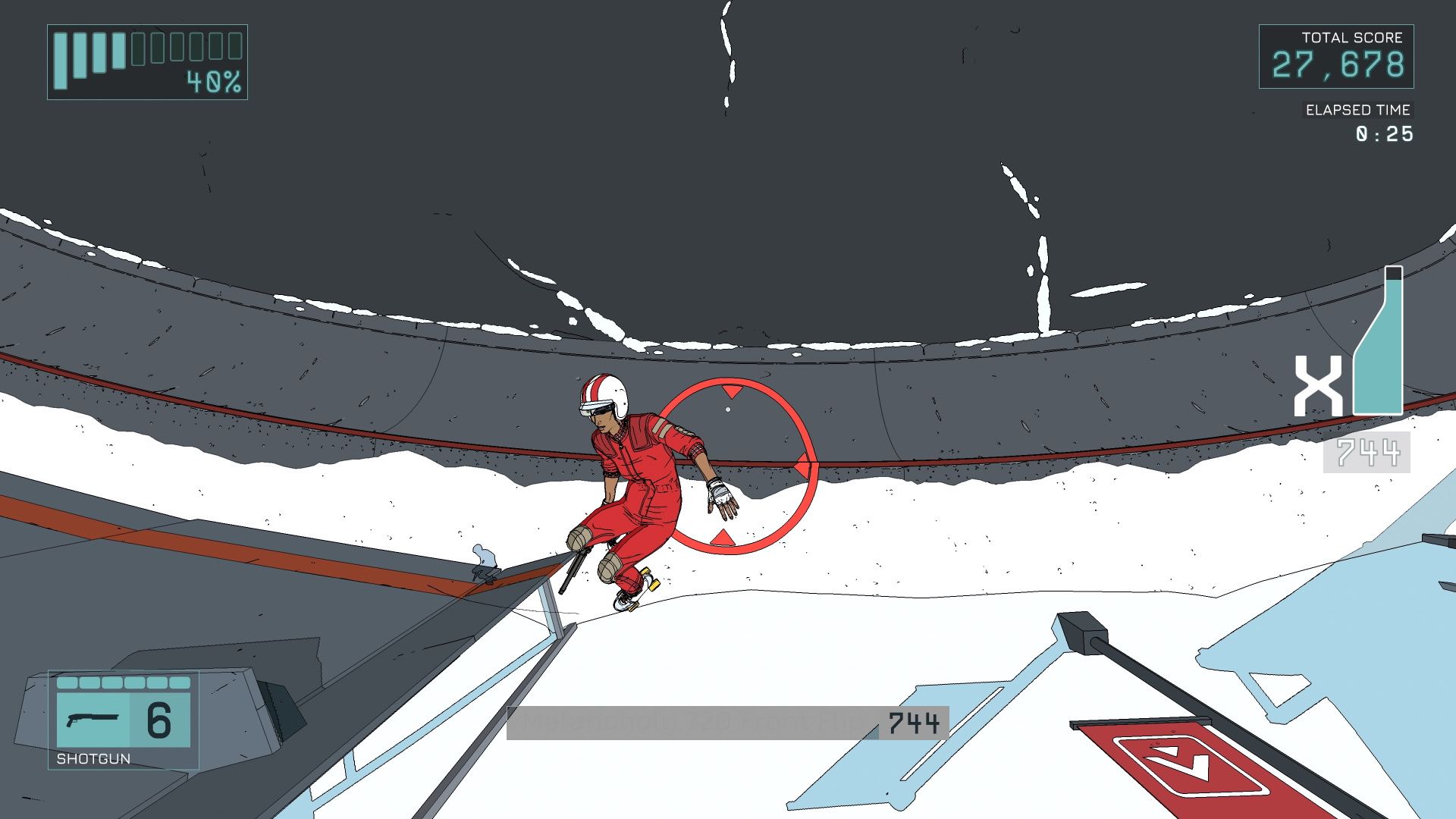 Do you know what looks super badass? Flying through the air, going John Woo with your dual pistols in slow motion. Bam! Bam! Bam! So cool! Unfortunately, if you are doing this too often, you are likely undermining your score pretty dramatically. For starters, the point value of every trick depreciates with every use. So, whether you hold the Weddle Grab all the way to the ground, getting the full 1500 points, or just hold it until you are in the sky, switching to shoot enemies, getting you only 500 points from the trick, both instances will count as a single usage.

The next time you use that grab it will give you fewer points. So, don't squander the trick when it is at its most valuable; instead, see the trick through and shoot your enemies once you hit the ground. The only time you should be abandoning a trick in the mid-air is when you are dodging an attack. As you progress and get into the later stages, you will have to do this a lot. But when the coast is clear, you should be squeezing every point out of your tricks. 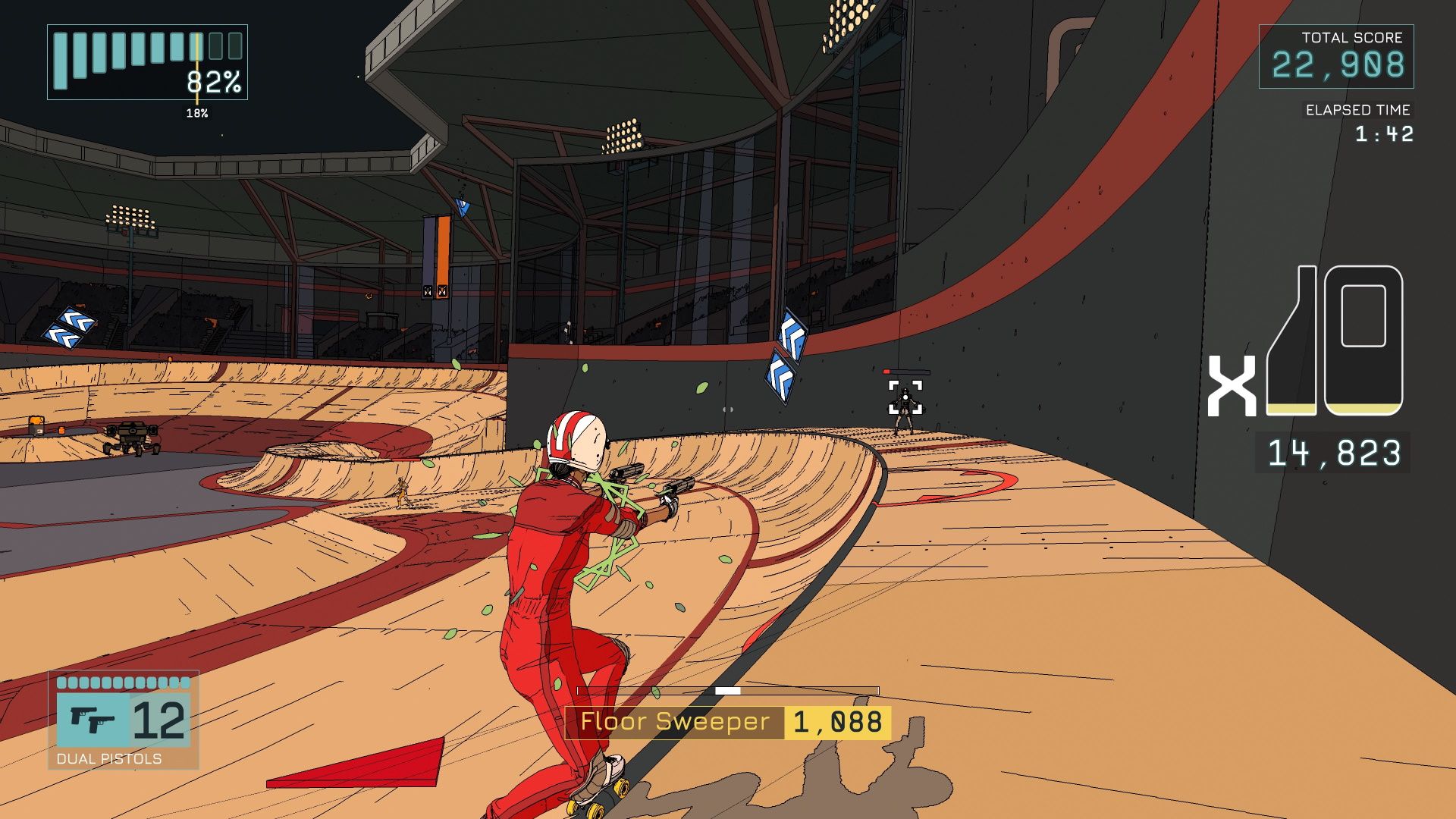 Sometimes it can be difficult to keep those combos going. You may find that you are on one end of the arena, and the enemy you need to get to is way on the other end. Surely it is impossible to make your way to them without losing that combo, right? Not necessarily. Look around for a rail. Many of the stages have rails that run along the perimeter of the stage.

If you are grinding then you are performing a trick (even if it has stopped yielding points). And most importantly, combos don't end mid-trick. So, you can ride rails all the way to a distant opponent, shoot them mid-grind, and keep that combo going. This also applies to air tricks. Though, holding the trick, while hitting the Reflex Time button and then pulling the trigger will pretzel your fingers. Still, it is worth it to keep the combo going!

First Gun Is Not Worst Gun 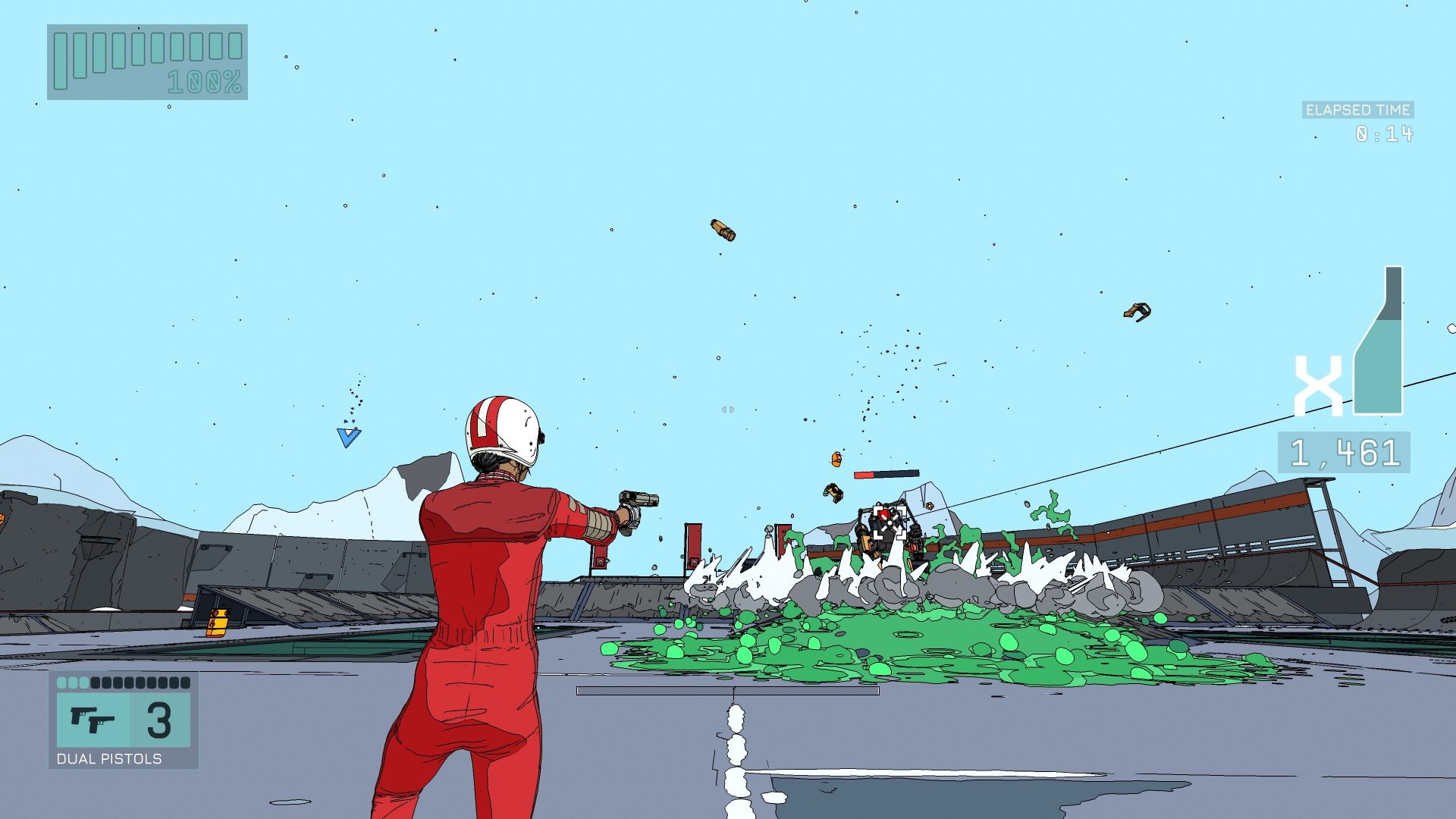 As you collect more weapons, you will find yourself with a pretty healthy supply of powerful weapons. The thing is, all these weapons are viable. More to the point, you will probably find that you are more effective in the arena when you are frequently switching between your weapons. And that includes your pistols. They may be your "weakest" weapon, but they are especially potent when paired with Super Reflex Time.

Let's give you a quick example: the best gun for taking out the shielded mine-throwing enemies is the shotgun. Especially in reflex time. Hit those Slug Shots and you will take them out quickly. The pistol is pretty useless against them when their shields are up… except when you are in Super Reflex Time. When you activate that mode your pistol is more than capable of tearing through these foes. One clip will take them out. And it will do it faster than the shotgun, which still requires that you hold to time the slug shot, which is just eating up your Super Reflex Time. 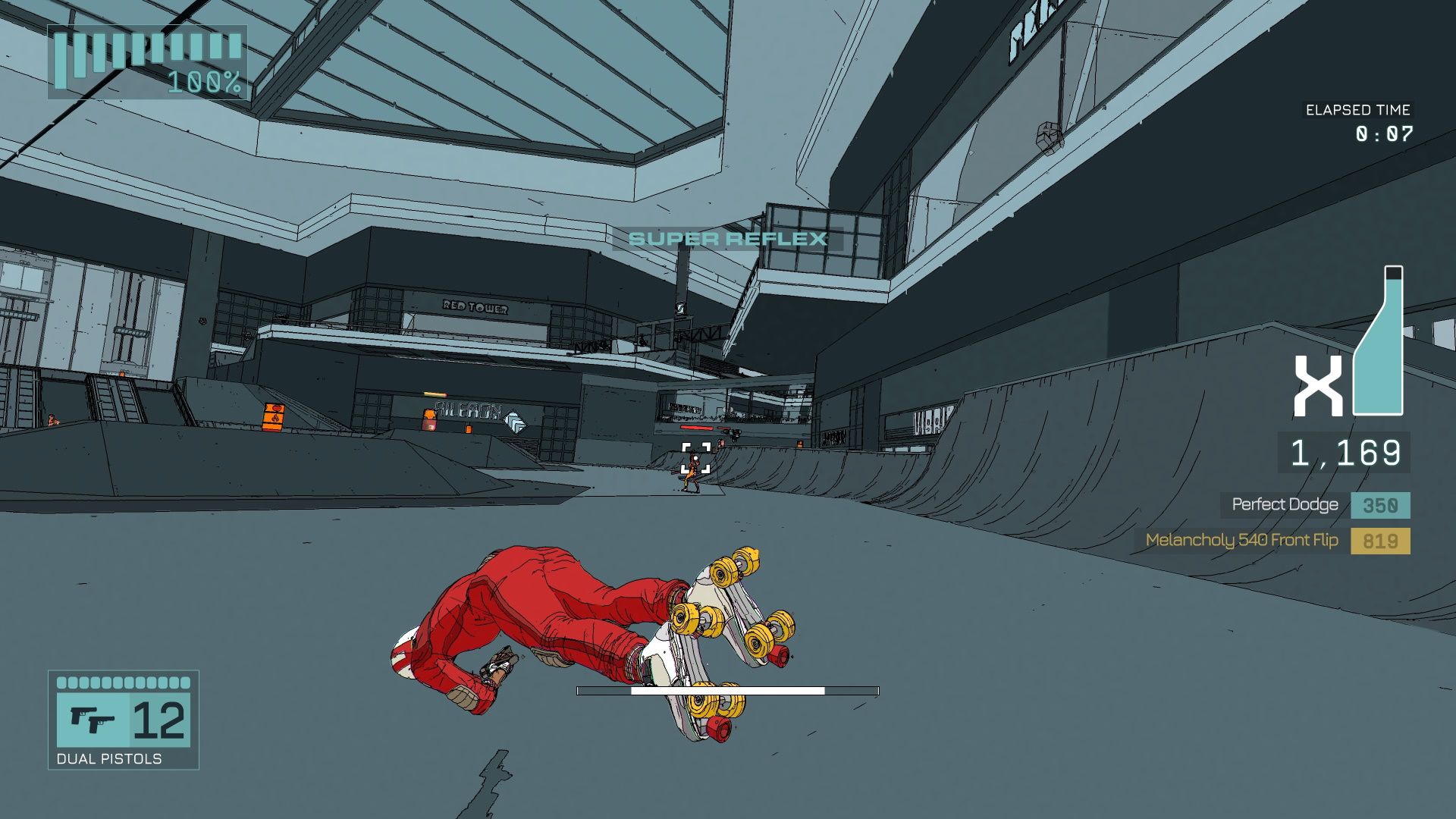 Reflex Time is Rollerdrome's version of Bullet Time. Naturally, it is an incredibly potent tool. However, while it is a great tool, you always want to be aiming to use the advanced form of it known as "Super Reflex Time". You perform the enhanced version by dodging an attack at the last second and then immediately pressing the Reflex Time button. Suddenly, you will start to see attacks that had previously been annoying as opportunities.

Landmines, as an example, are a fantastic way to get your Super Reflex Time going. Just ride directly into them and dodge the second you come in contact with their area of effect. Bam! You're in Super Reflex Time! Why is it so great? Well, as an example, those troublesome beam-shooting enemies can be taken down with a single clip from your dual pistols. The substantial increase to the power of your weapons means you will be able to take out multiple threats at a time. It is a pivotal tool for clearing certain challenges! 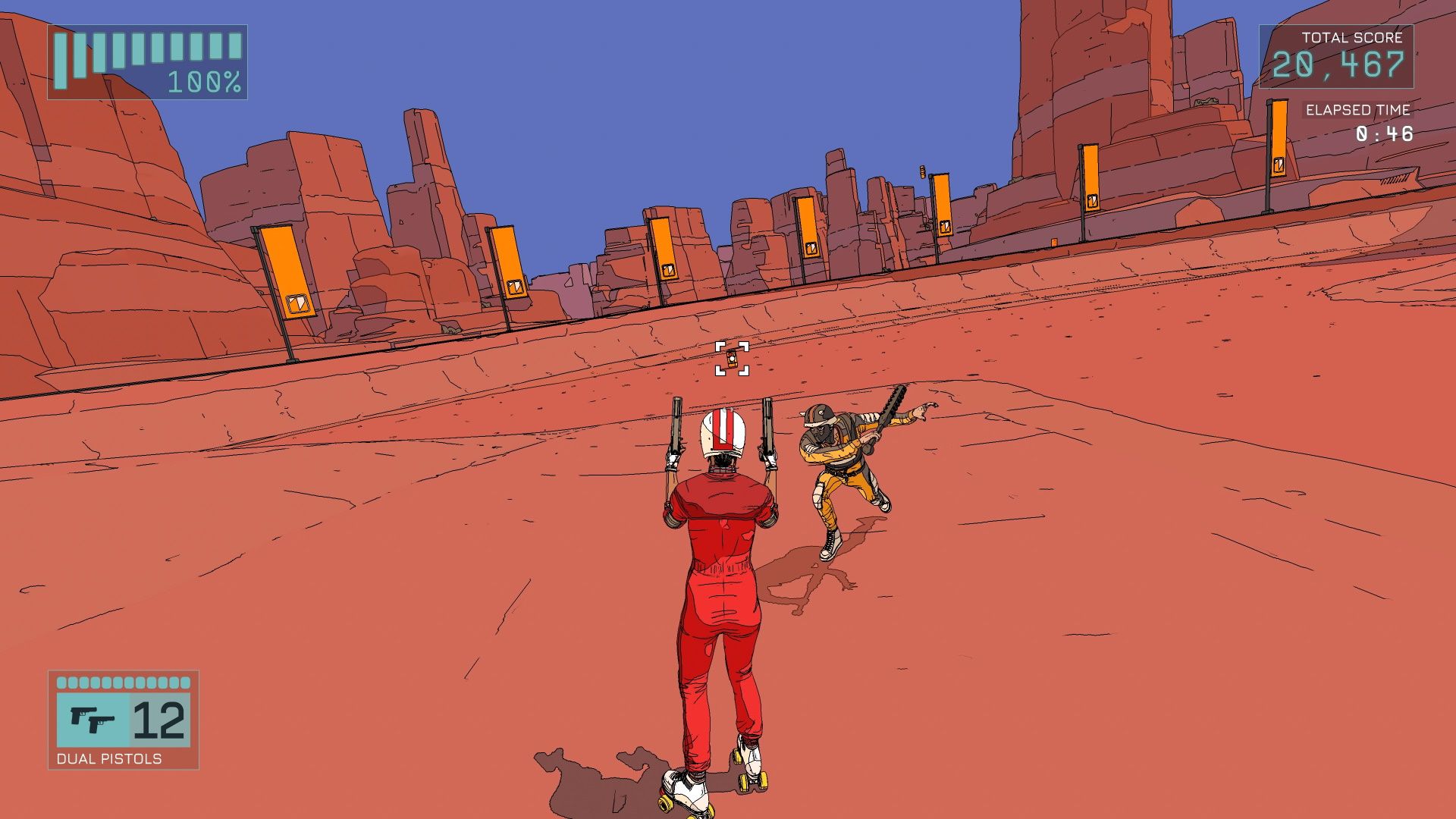 Grunts are the stock bat-wielding enemies. And, as you progress through the game, you will realize that they are enemies in name alone. Their real purpose is to provide you with a way of continuing your combo as you traverse the arena. Or, alternatively, as a quick way to kickstart your Super Reflex Time (just dodge their bat swing).

So, instead of just blasting every Grunt you see, leave a few alive. That way, when you need to get to the other side of the stage, you can pop one of these mooks and keep your combo counter running strong. Another thing these Grunts provide is an easy source of health. When you are running low on vitality, if you have a couple of these goons stumbling around you can pop 'em and heal up. 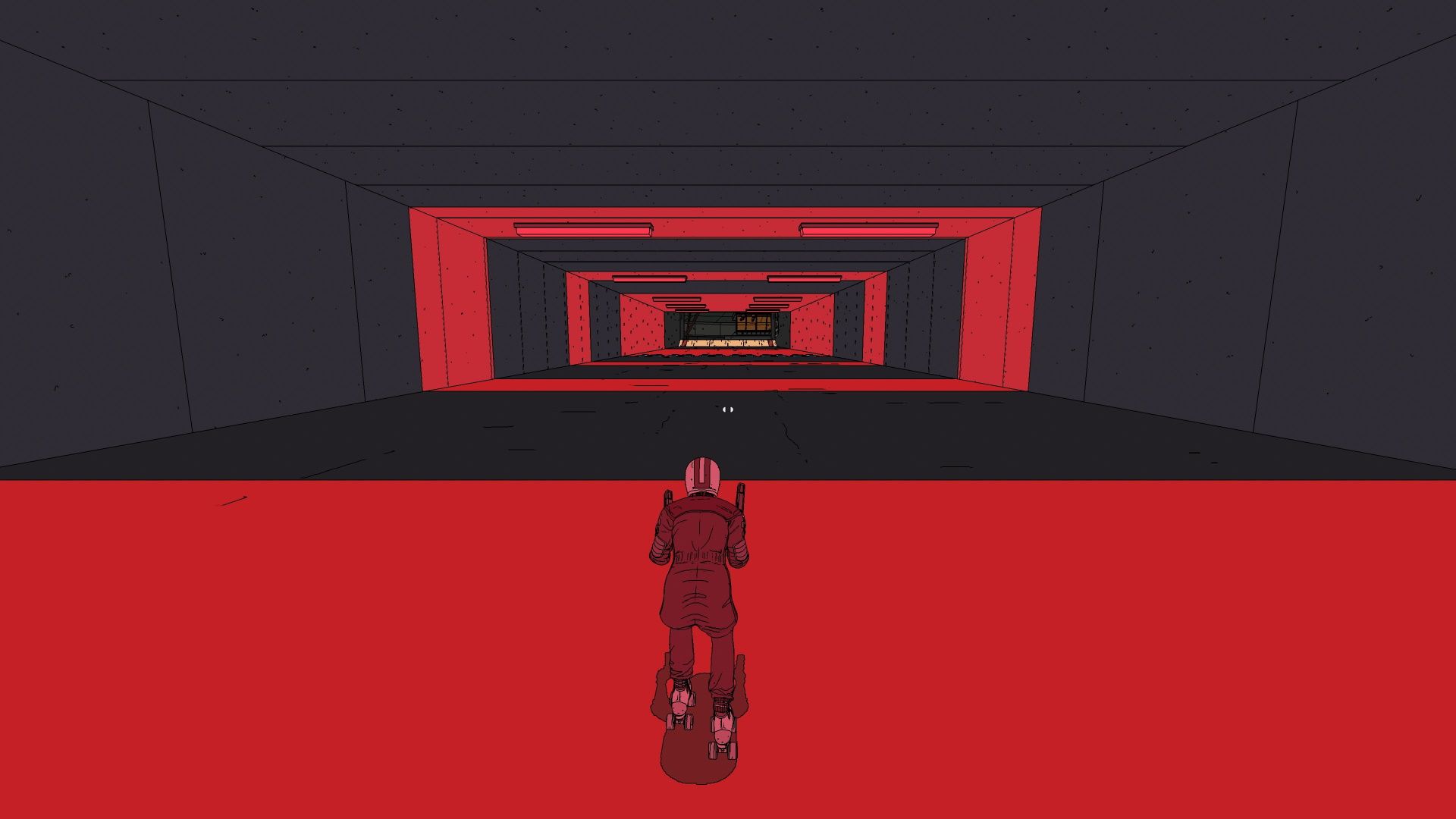 Look, you don't need to do everything the first time through the stage. You can go for the Combo Tokens and the high score one pass through, and come back and finish the specific trick challenges the next. Honestly, this will often be the best way to approach some of these challenges, as certain challenges can really hobble a run.

For instance, clearing a stage without using certain weapons, or only using certain weapons. That stuff isn't likely to give you your best high score. Similarly, keep in mind that once you unlock weapons, you can take them to previous stages. Some of those challenges that are based on completion time can be pretty brutal, but they will be easier if you come back to them when you have better tools.

The Hierarchy Of Murder 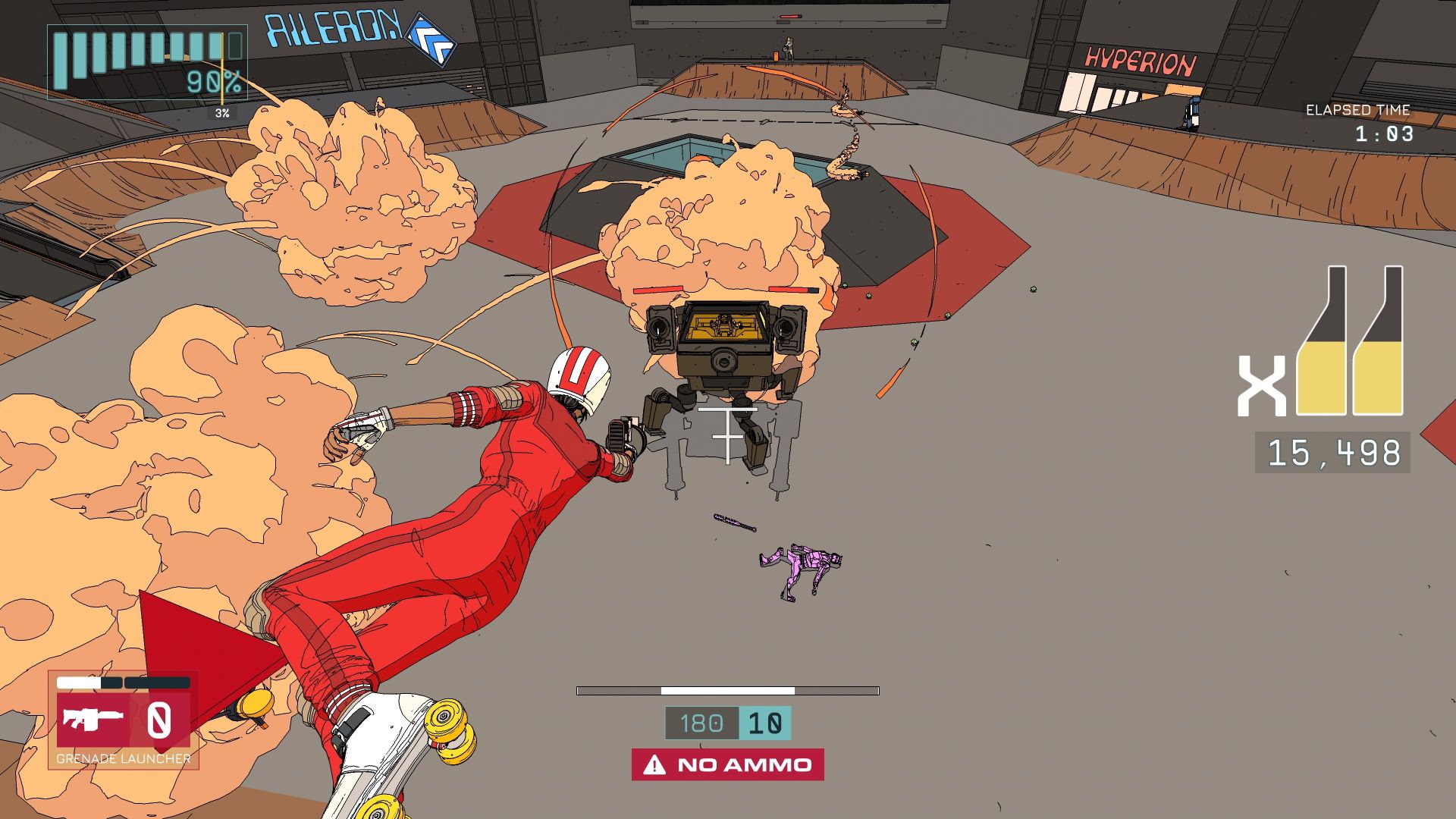 Your mileage may vary with this one, but it is important to know what enemies you need to take out as quickly as possible, and which ones you can use to your benefit. As we mentioned previously, the Grunts are basically there to heal you and keep your combo counter going, so you want to avoid killing them. The Snipers are also pretty useful for getting into your Super Reflex Time once you get used to dodging their attacks. However, the Warheads just fill the screen with missiles. So, you probably want to take the Warheads out as quickly as possible.

Other enemies like the Shielded Riot Guards drop mines that are useful for entering into Super Reflex Time, but the Mecha Brut and the Stompers are probably way too dangerous to not take out as quickly as humanly possible. Polybeams could go either way; they do provide a nice opportunity for that perfect dodge, but having beams of fire ripping through the stage can be a lot. You are going to want to zero in on these problem enemies and take them out as quickly as possible, as some of the later stages can get pretty crowded. This is an excellent way to control the playfield.