In Rubber Bandits, you're essentially trying to make off with the most money out of all the players, which unsurprisingly is met with a few hurdles. To overcome these minor problems, one of the best things to do is defend yourself with various weapons, fully utilizing things like shotguns, swords, and bombs.

These weapons are randomly generated, so there's only so much preparation you can do in advance. The main thing to remember is which weapons you should be using whenever you get the chance; all are fun to use, but some stand out above the rest.

10 Death Ray – Don't Stray Into The Line Of Sight 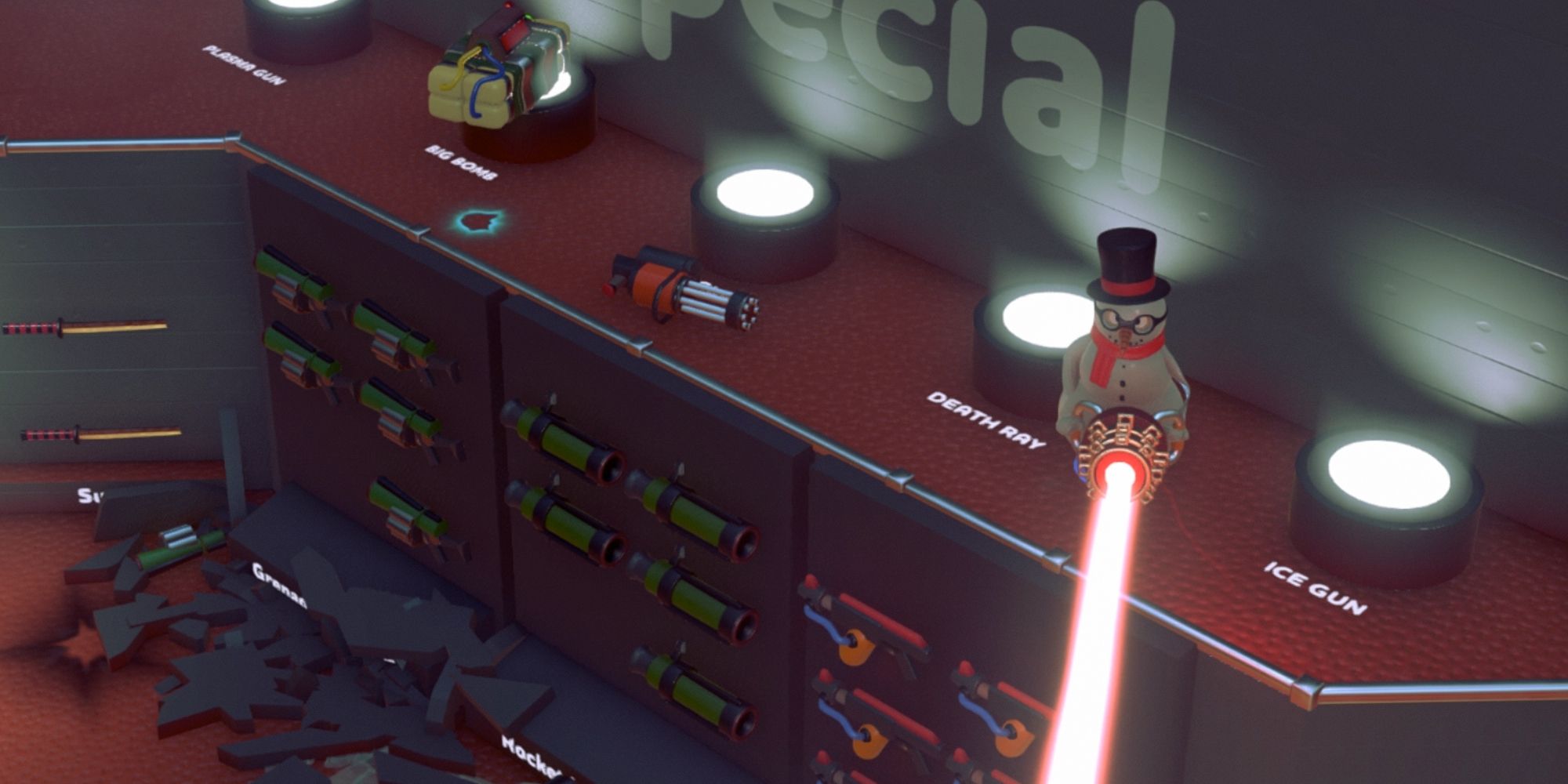 There are some weapons that do the job and then there are the ones that make you look cool while you use them. If you get the choice between using a powerful flashy weapon or a basic one you can find in every game out there, the flashy one wins every time. The death ray not only looks cool but is good at dealing damage while also being easy to aim.

The weapon has a long range, lasts for a long while before running out, and makes you feel like you're back in the days of completing a renegade run in Mass Effect.

9 Flame Thrower – Turning Up The Heat 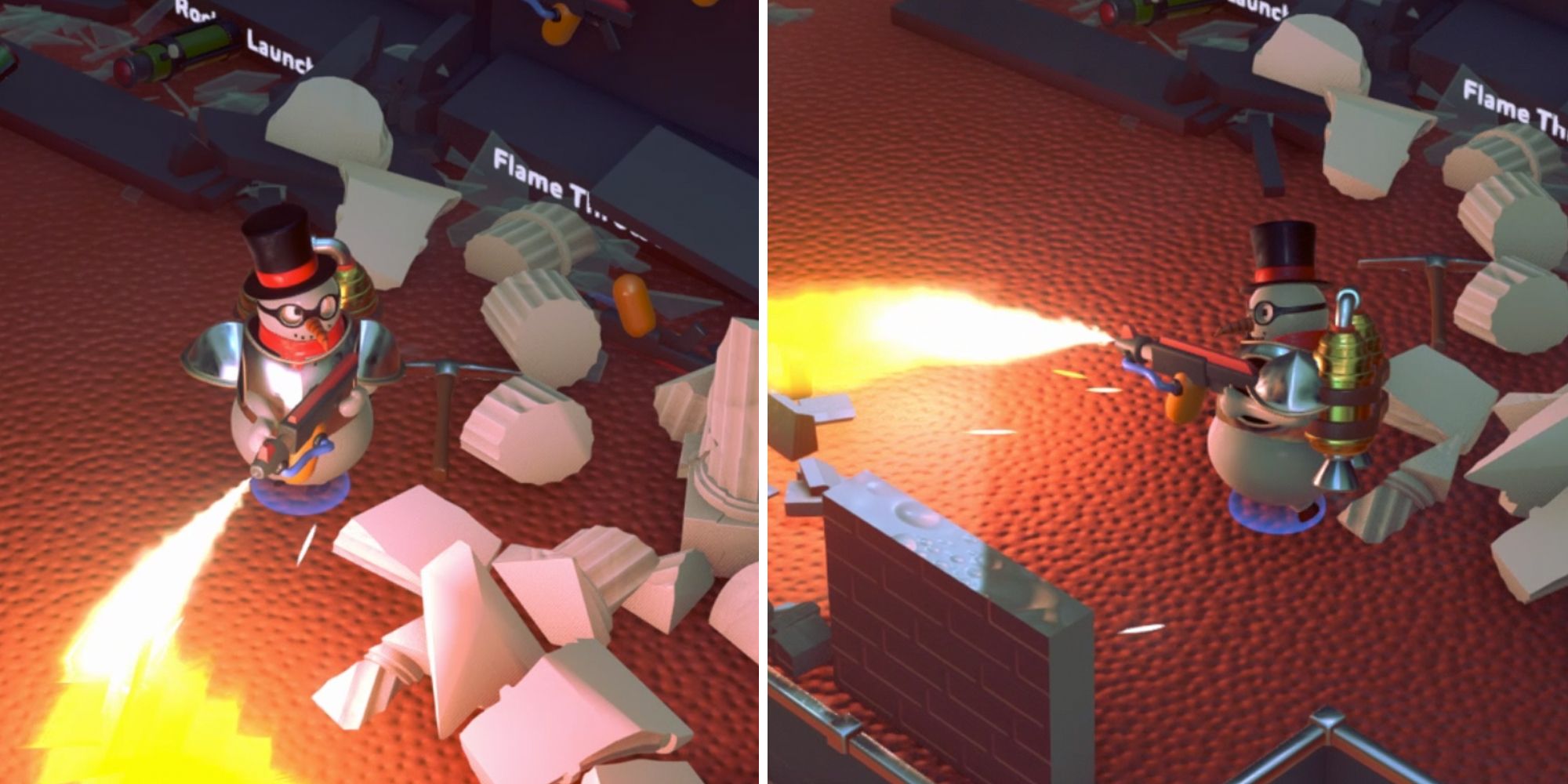 When armored enemies are getting the better of you, there's no better tool to combat this than the flamethrower, as it's good at whittling down defense. The weapon's long-range coupled with the strength in its damage inflicted makes for an item you should be picking up whenever you see it on the map. The flamethrower is a good choice for taking out the police in particular.

Strangely, it performs in a similar style to the flamethrower of Alien: Isolation if you ignore the fact there's no deadly organism that chases you around a spaceship in Rubber Bandits. 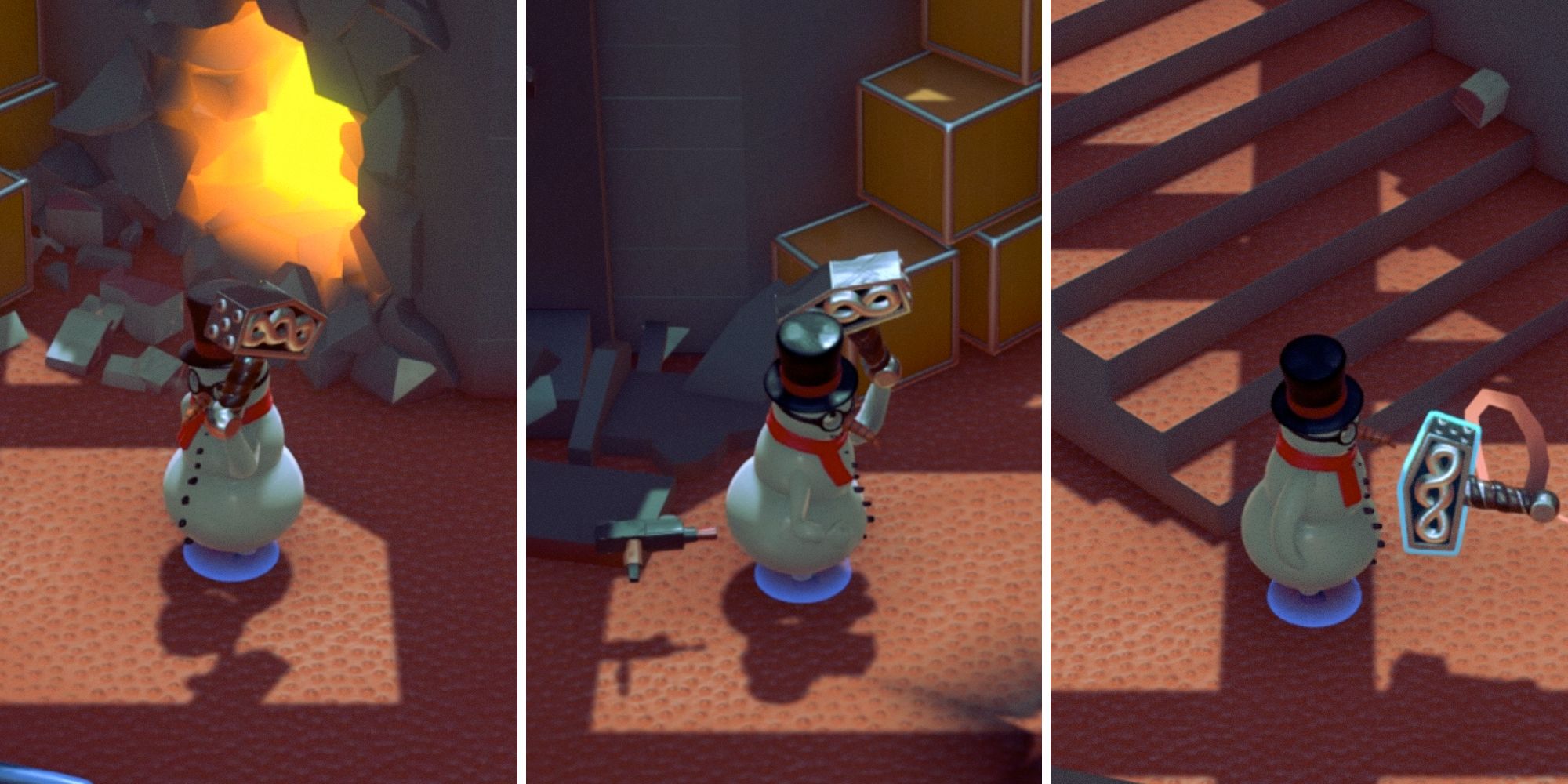 Rubber Bandits allowing you to use Thor's hammer is enough for it to make this list because, well, it's Thor's hammer and something that everyone wishes to be able to have the chance to use. The hammer works well for both close-up and ranged attacks, as after throwing the hammer, it will return to your hand. Now the range on the hammer isn't extensive, you can still only toss it a little ahead, but it's still very entertaining to use.

The fact that the devs thought about adding this little detail is admirable and valuable for the gameplay itself. If someone is heading in your direction with the loot, this hammer will help you out in a pinch.

7 Wind Blower – Hold Back The Crowds 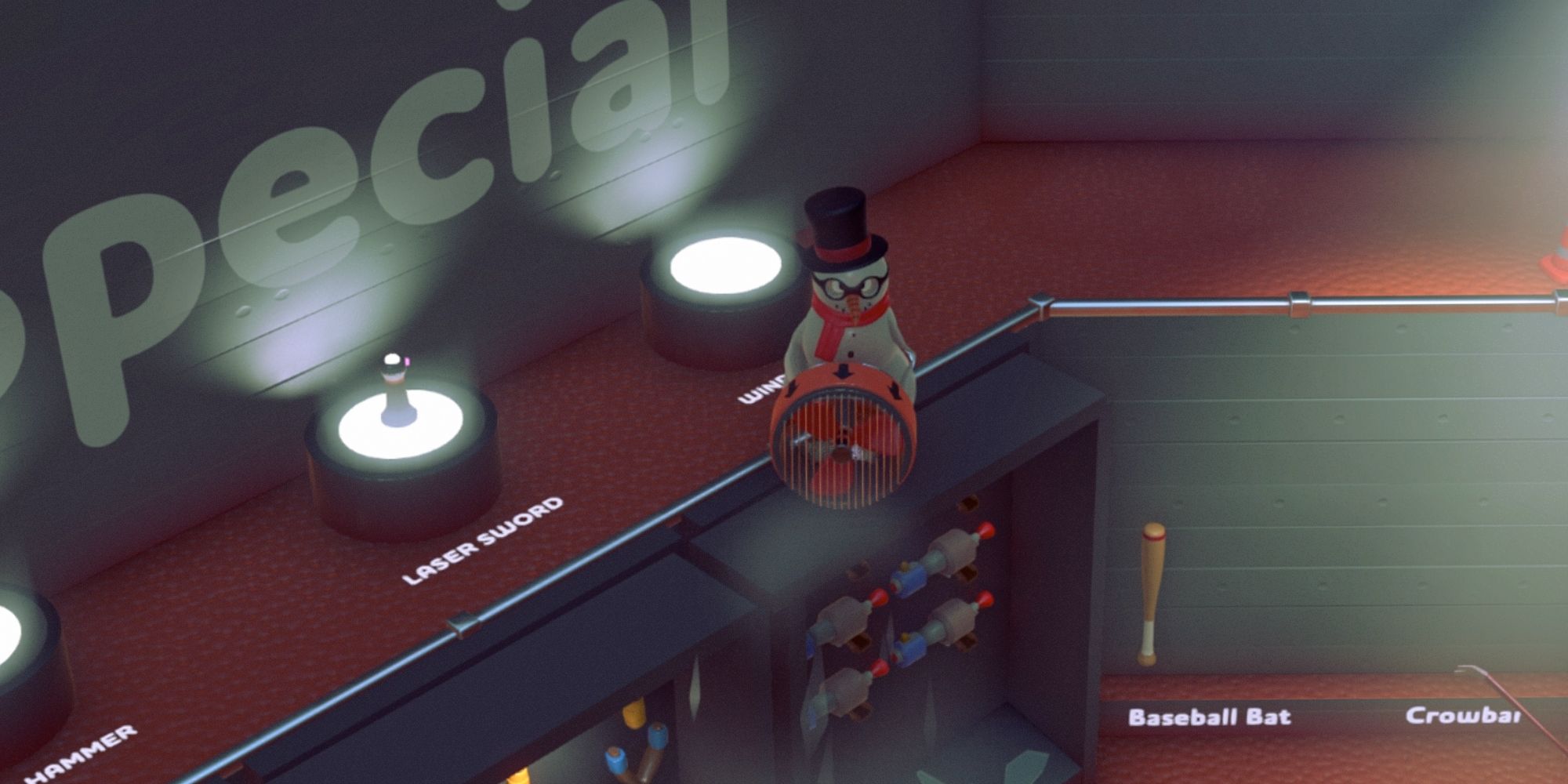 The wind blower is one of the special weapons in the game and works more as a defensive item because it pushes people back rather than hitting them with a bullet. You can use the wind blower in many different ways; however, one idea, for example, is to aim the wind blower at another player when they're near the side of the map and push them off before they're given a chance to react.

Another is to push them back so you can get a headstart on working towards the direction of the loot. Whichever way you use it, it's a very powerful tool, albeit one that is more fun to use on someone than to have it used on yourself. 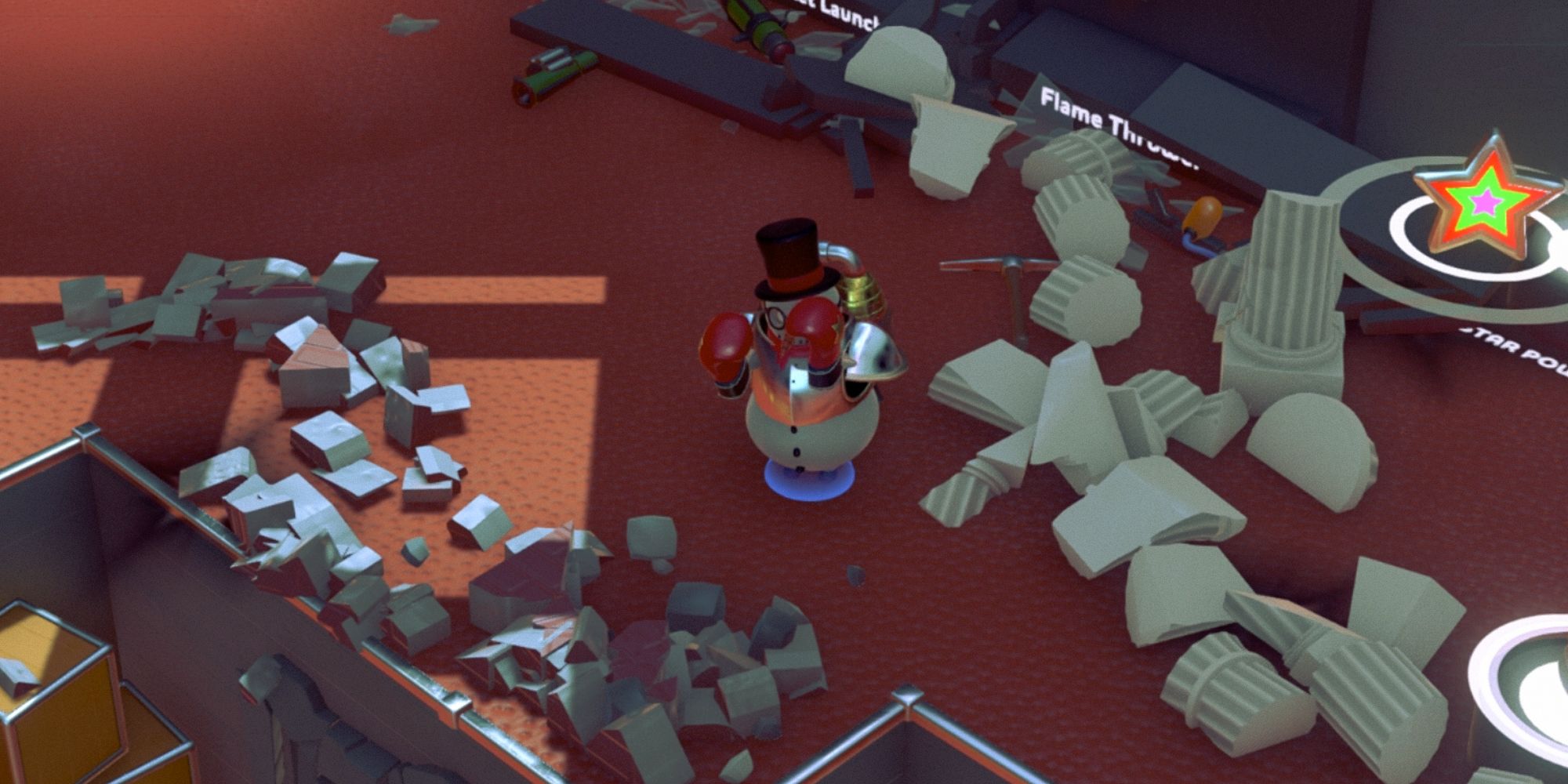 If everything is becoming a little too closed in and you need some sort of reprieve, punching a fellow player with the boxing gloves equipped is an acceptable way to go. This weapon is suitable for very close encounters, both figuratively and literally. However, since it's dangerous to get too close to your opponents, boxing gloves should only be used for desperate situations.

You can also use the gloves to punch down things like walls, railings, pillars, and everything else you may feel like hitting. They last a while and do pack quite the punch, so if a desperate situation doesn't arise, using them for the general knocking down of an object works fine. 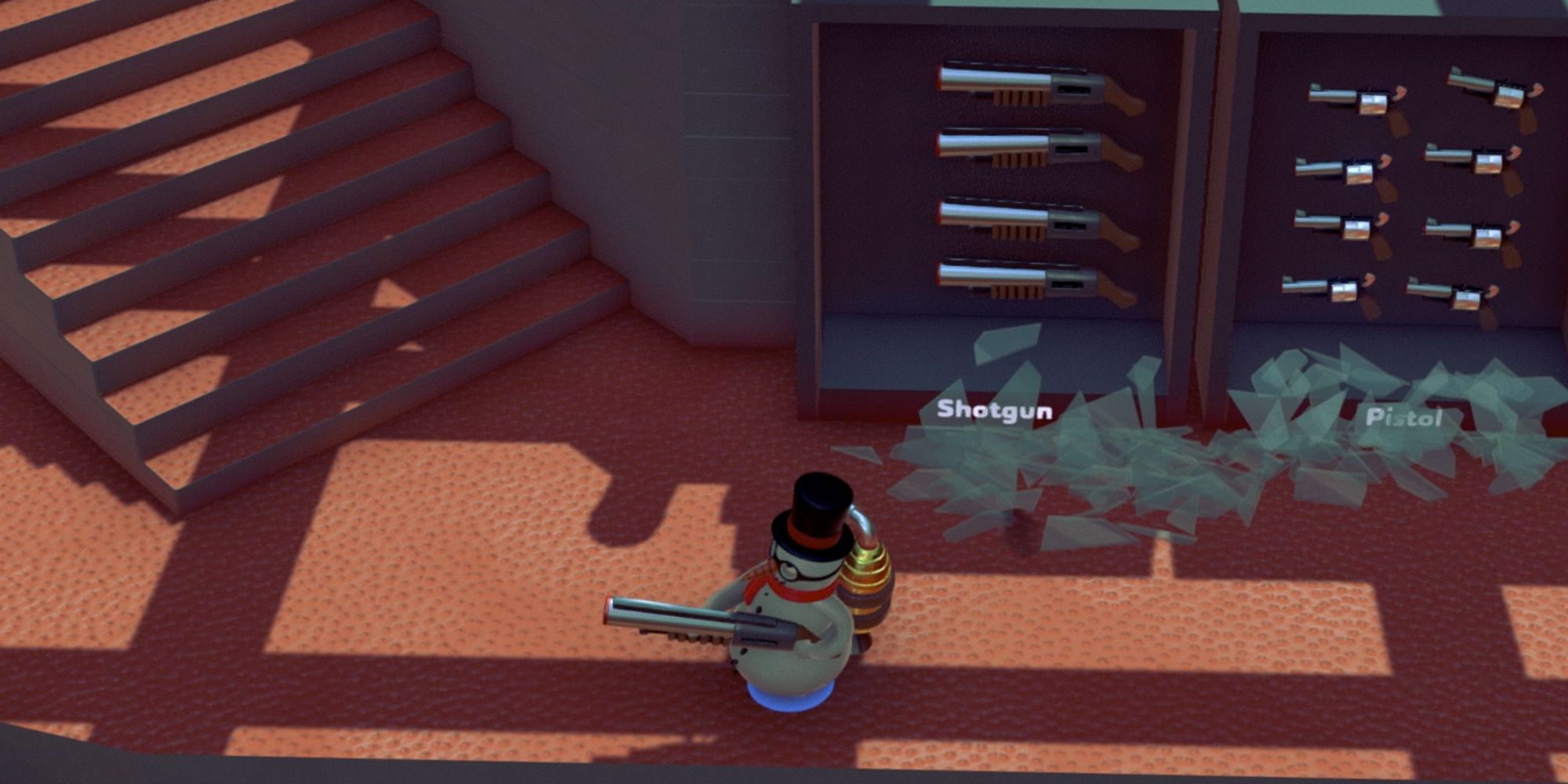 The shotgun is the most beneficial standard weapon in the game as it's very reliable and is sure to take down your foes. There is the downside of how long it takes to shoot with this gun because it gives other players ample time to chime in with their attacks. For this reason, it's best to use the shotgun when only one player is near you since others will take longer to get to your position.

While other weapons are fine to use for breaking the occasional objects, the shotgun should only be used for attacks unless you're left with no alternative option. You don't want to waste all your ammo on breaking all the glass panes in the map before you even get a chance to test it against an enemy.

4 Big Bomb – Does What It Says On The Tin 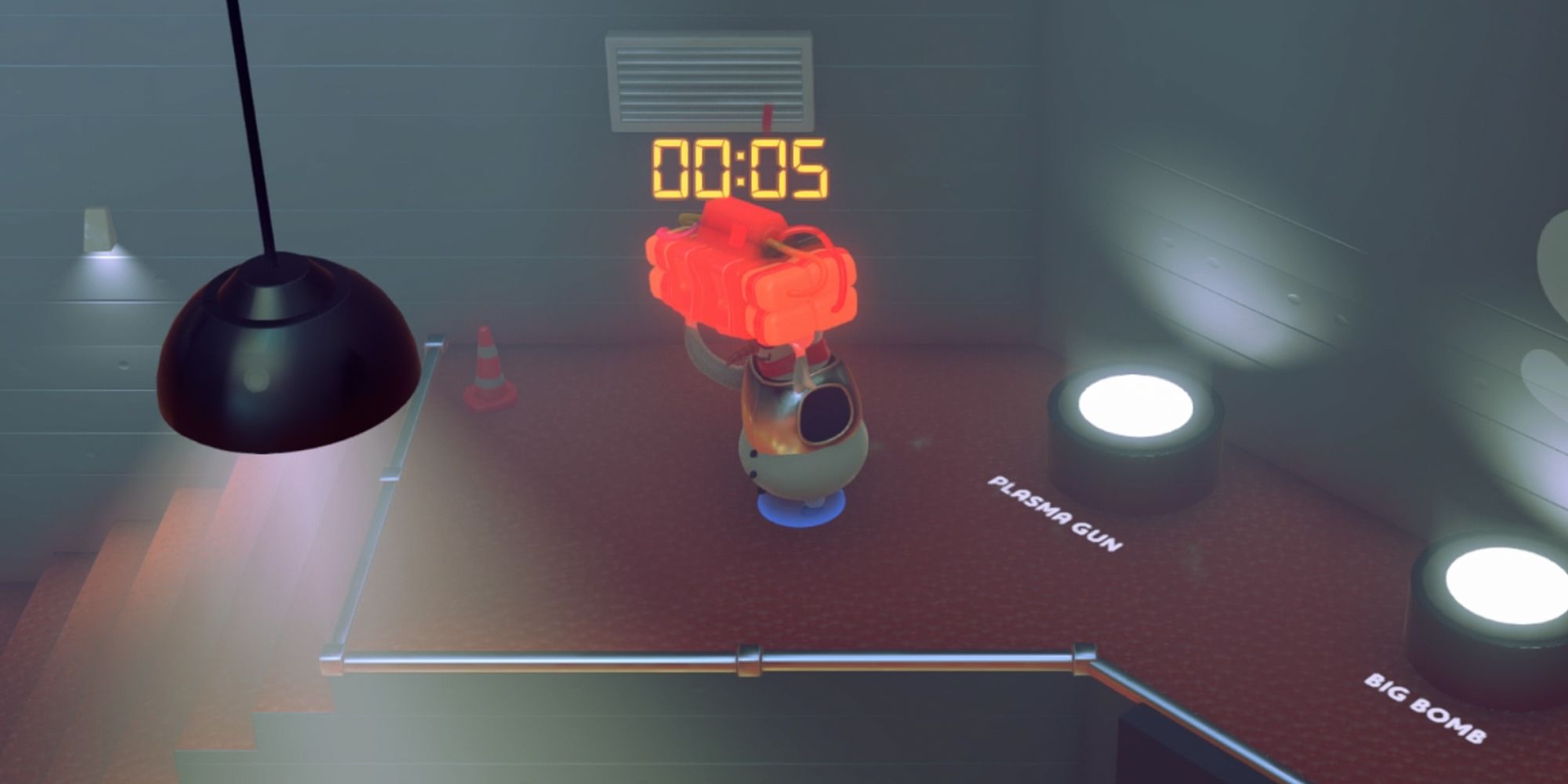 The name of the weapon alone should be more than enough to convince you to try out this bad boy, as it definitely sounds like something dangerous. And it is if you can plant it in a place before your opponent can get out of reach of its damage area. The bomb is a potent tool for knocking out players if you're able to trap them near it, which is incredibly tricky. This is why it's much more convenient to use the bomb to divert players away from somewhere or use it for breaking objects.

If used to divert an enemy path, placing it near the loot will force the player to move out of the way so as not to get blown to pieces. While they're running away, you can take this opportunity to get a safe distance from the bomb but close enough that you can get your hands on said loot before your opposing player. 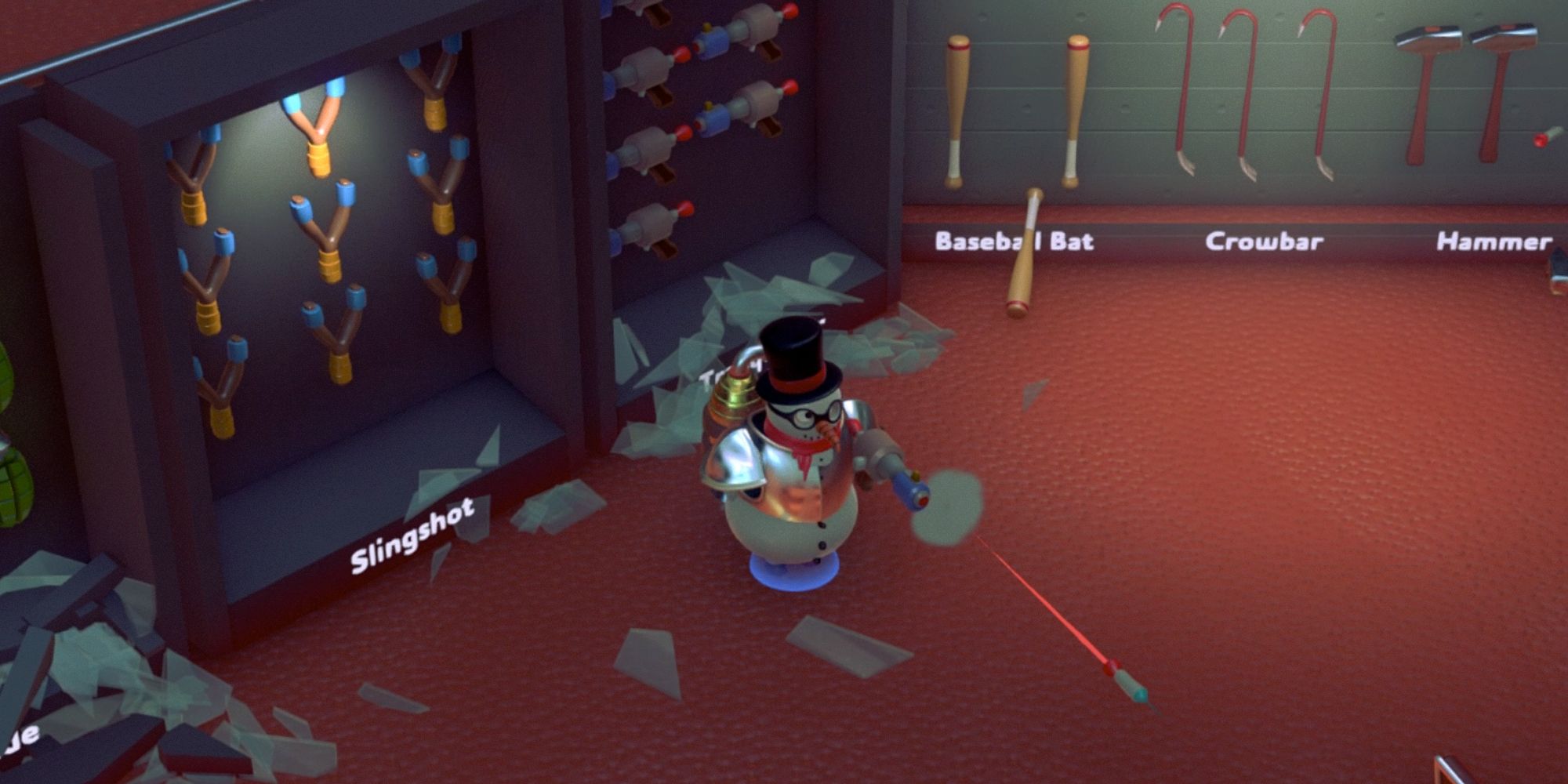 If there were ever a perfect time and place for a tranquilizer to be used, it would be in the game Rubber Bandits. So often in games, you see characters betraying you where people you've spent the entire runtime with turn on you at the last possible moment. You trusted them, and they broke that. Well, things work slightly different here since there was never any trust in the first place, but it's basically the same thing… almost.

If a particular player is getting on your nerves, progressing with their plan of running off with all that sweet, sweet money without you, just knock them down with the tranquilizer. They won't be out for long, but there'll be enough time for you to do what you're planning. 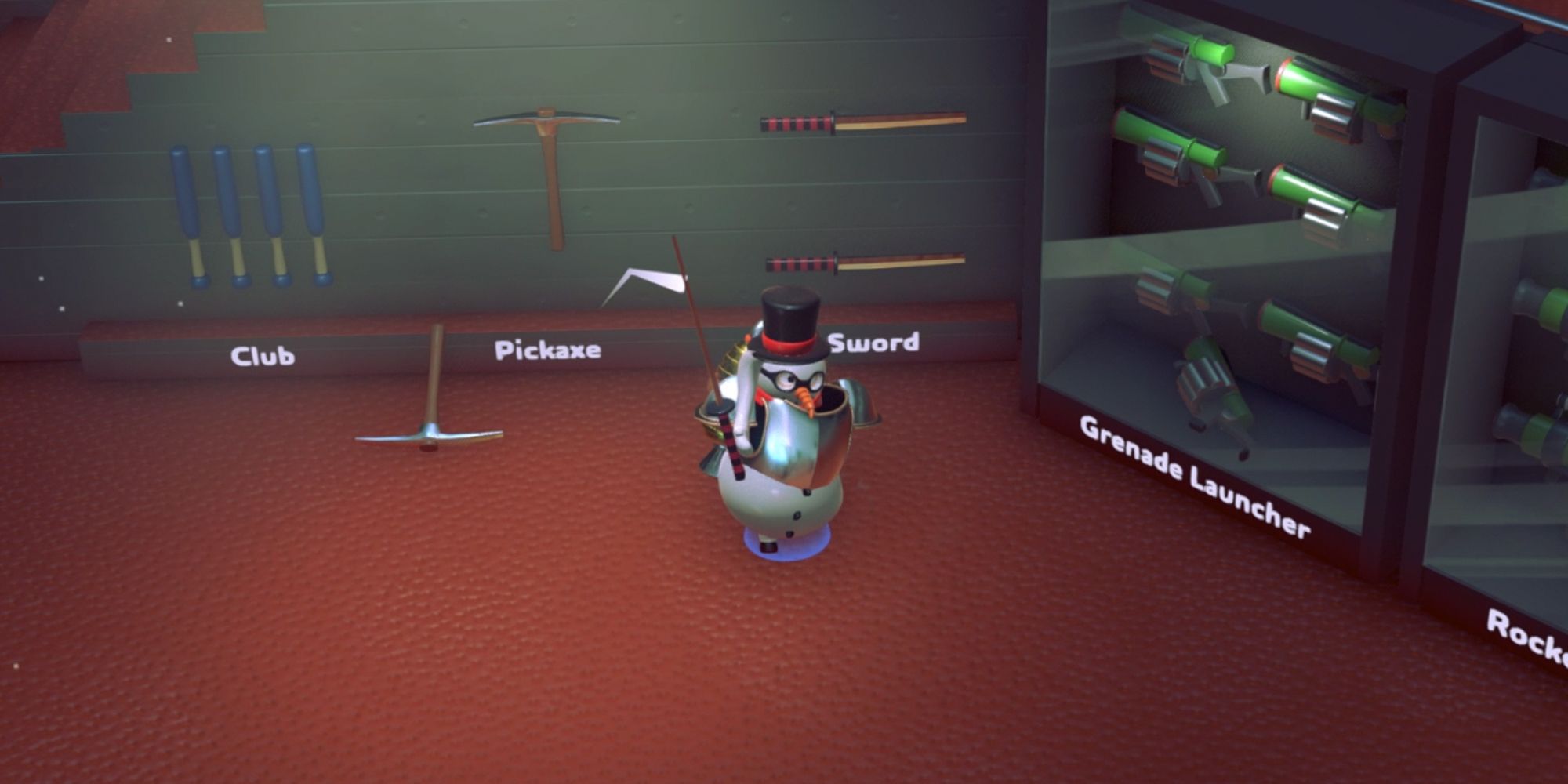 If you require a decent ranged melee weapon, the sword is the way to go. All the melee weapons are good in their own right, but this blade is simply the best of the bunch. Pillars quickly go down with a swing from the sword, as do enemies, and the swiftness of the swipes makes for an incredibly quick weapon.

Above all else, the sword is also really satisfying when used; it's a good all-rounder that encompasses all you could need from such a weapon and is ever the reliable tool at your disposal.

1 Laser Sword – Remember To Use The Force 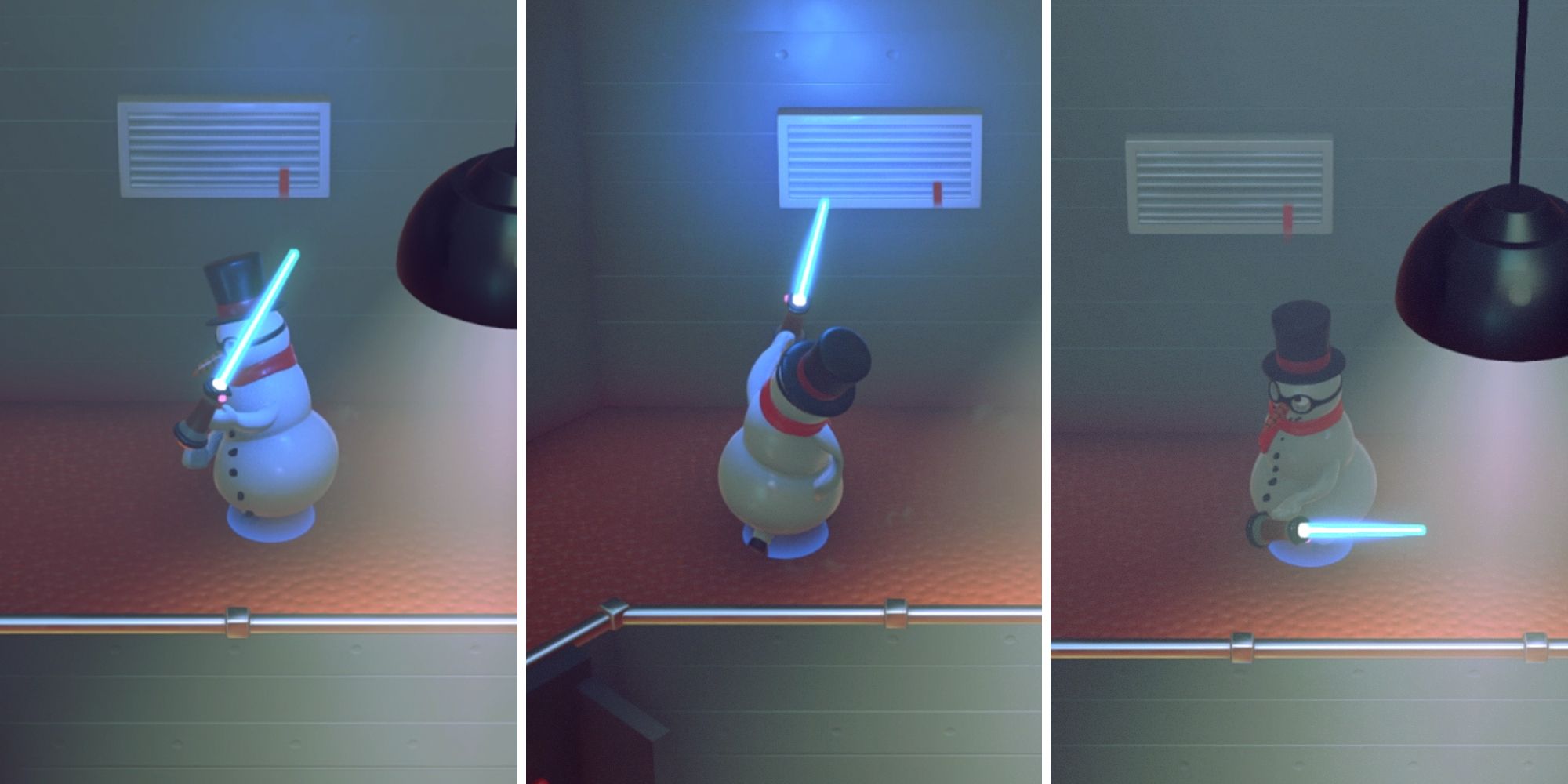 Using the laser sword allows you to finally live out your space dweller dreams, and yes, that was a slight nod to Star Wars. Everyone has wondered what it would be like to swing a weapon like this, and now you can try it out in a cute pixelated form while dressed as a snowman! The laser sword works the same way as the classic sword but looks and feels much more exciting to control.

Better yet, the color of the sword differs depending on which color team you're a part of, so you can either have a; blue, green, yellow, or purple blade to mess around with to your heart's content.