Atlus has revealed that Shin Megami Tensei 3 Nocturne HD Remake will launch May 25 on Nintendo Switch, PS4, and PC via Steam. Pre-orders are available now, and those who do choose to pre-order the Digital Delux Edition will have access to the game four days early on May 21.

Shin Megami Tensei 3 Nocturne made its debut back in 2003 as another dark installment to the SMT universe from Atlus. You’ll journey through a doomed and transformed Tokyo as the Demi-Fiend, a former high school student roped into an apocalyptic event. Nocturne was lauded as one of Atlus’ darker titles, and the game’s ESRB rating summary is a reminder as to why it landed that Mature icon.

The remake is a cleaned-up version of the cult classic, sporting remastered 3D models and backgrounds. Atlus has also included new difficulty settings, a suspended save function, dual audio for English and Japanese voices, and a new story branch featuring Raidou Kuzunoha. 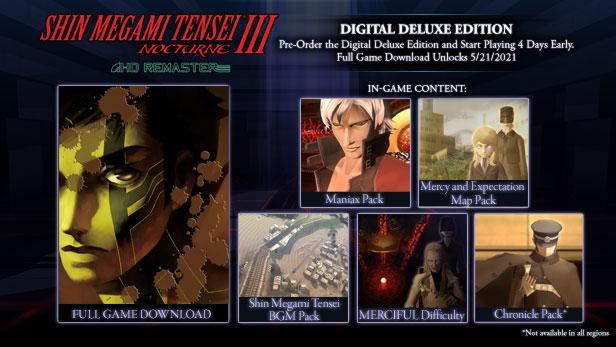