When creating your build in Spellbreak you need to consider your class, gauntlet, rune, but also which Talents you plan on bringing with you into the match. All of these aspects of your build should synergize together to make you the most powerful Vowbreaker on the battlefield. Between the Mind, Body, and Spirit categories, there are a few talents that, at least for now, are almost objectively the best in the game. Here’s the talents you should be investing in to stay at the top of Spellbreak’s meta.

The Best Talents In Spellbreak

You will only have three talents to pick from when first starting the game, one for Mind, Body, and Spirit, and will only ever be able to bring in a maximum of one Talent from each category into a match. As you play and level up the six different classes, though, you can unlock a total of five talents for each category, maxing out at 15 total Talents in the game. Each Talent also has an associated cost of either one, two, or three points you will need to manage from your pool of six talent points. But, a higher cost Talent doesn’t necessarily mean it is better than the lower cost ones. 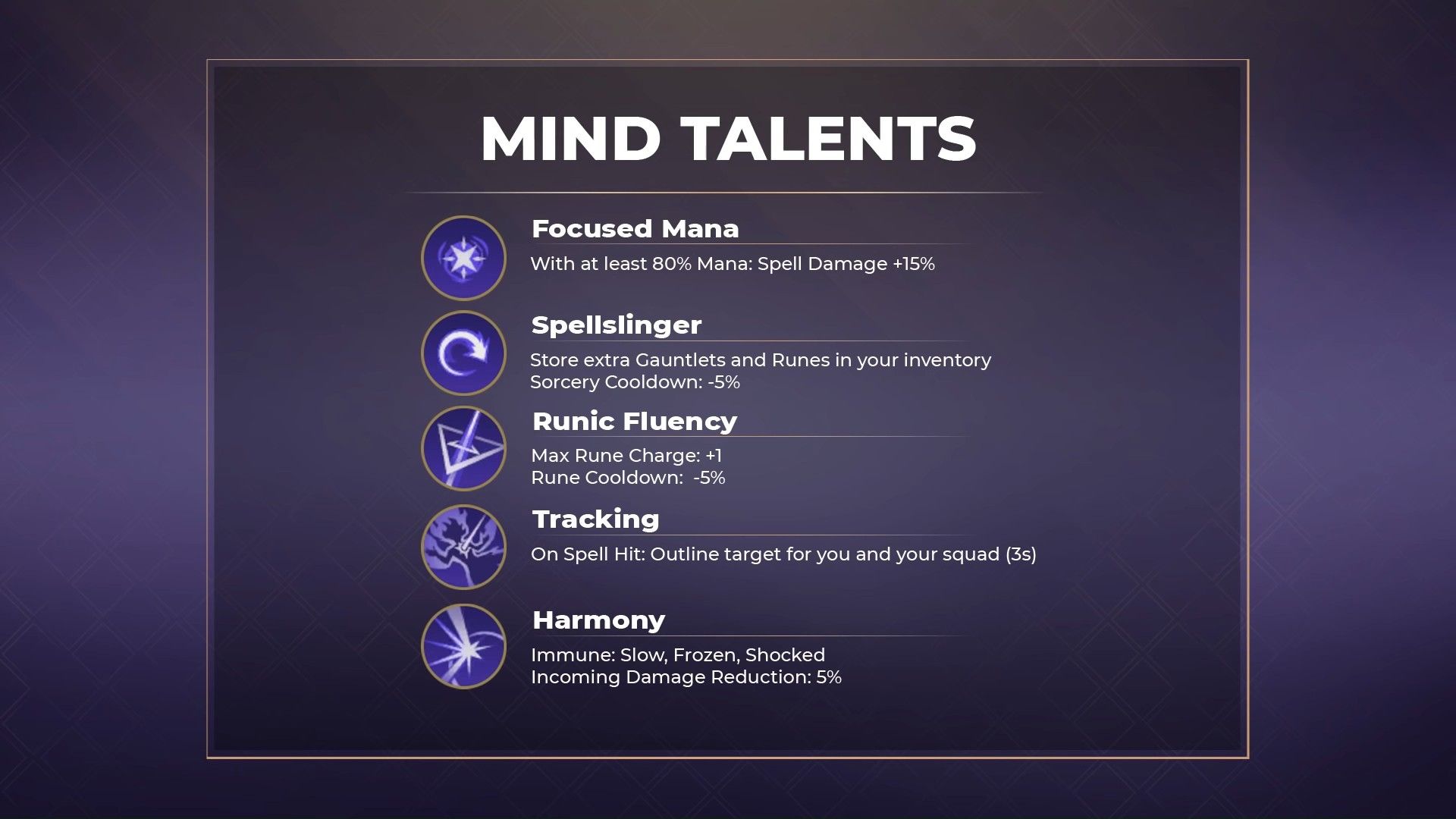 What has generally become accepted as the best Mind Talent in Spellbreak is the Runic Fluency talent. This gives you one extra maximum runic charge, plus decreases your rune’s cooldowns by 5%. Runes are a major factor in your performance during the match, so these buffs will give you a major edge all match long.

Harmony might have some use cases for you if you run Stoneshaper or Toxicologists and are constantly fighting at close range, but the damage reduction is minimal and the immunities won’t always be relevant. 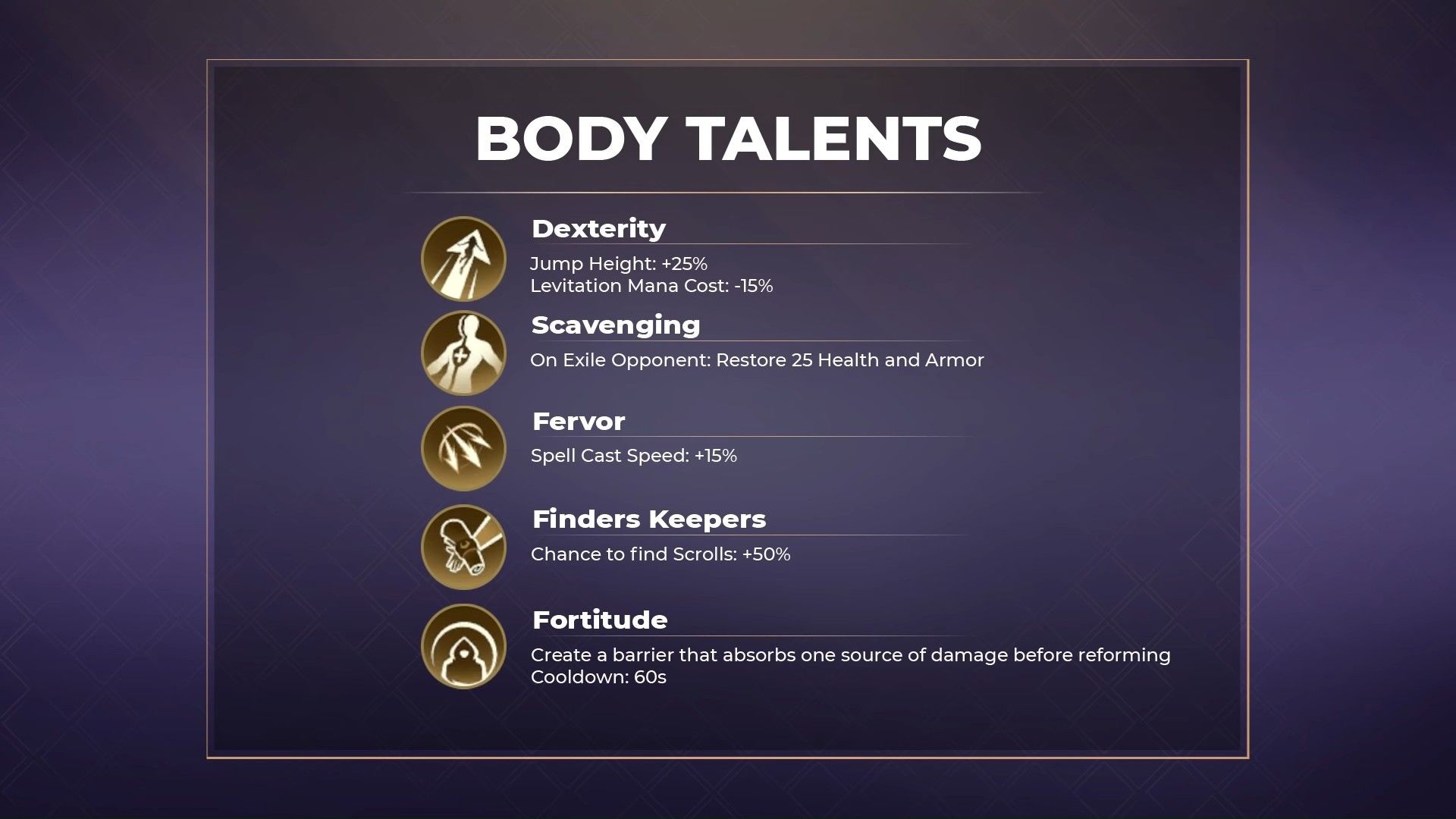 Body also has one talent that has risen above the rest in the eyes of the high level players, and that is Scavenging. While you’re exiling an opponent, this talent will restore 25 health and armor. This can be a major swing in the late game when health potions and armor shards are harder to come by and every ounce of health matters as the circle closes in.

Many early game players may be drawn to Fortitude, which gives you a barrier that blocks one hit of damage, no matter what it is, before going on a 60 second cooldown. Sure, blocking any attack sounds incredible, but the barrier it puts up is visible for anyone to see and will vanish no matter what it is hit by, so an attentive player will just tap you with a weak shot to get rid of it before unleashing their stronger spells.

Unlike Mind and Body, Spirit doesn’t have a clear standout Talent. That doesn’t mean there are no great options, though. Thirsty, for instance, allows you to consume potion and shards 50% faster, plus affect any nearby teammates for 50% of their value. If you’re running with a tight squad with multiple Thirsty talents equipped, this can really buff up your team quick.

Recklessness is another talent to consider, which buffs your spell damage by 15% and reduce your mana costs by 15%, but only when you have no armor. Naturally this is a risky talent to make work, but if you’re running a Stoneshaper that can regenerate shields naturally it could be  worth considering.

The only one you should stay clear of is Vital Stone. Yes, being brought back to life sounds awesome, but more often than not you’ll just end up getting shot down as soon as your temporary immunity wears off since you’ll only have 10 health.