Moments after having destroyed the Unstable Statuary Ram boss, you will be confronted by the game's second Titan: The Selenite of the Louvre. Clearly, Steelrising has no chill. Unlike many of the other bosses you fight in Steelrising, the Selenite can be quite quick and is more than capable of closing large amounts of distance in the blink of an eye.

Related: Steelrising: The Tuileries Part 1, Quartier Du Louvre WalkthroughFeaturing projectiles, fast lunging attacks, a shield, and mastery over both lightning and fire, it is easy to see how the Selenite may be a cause for concern. Luckily for you, Aegis herself isn't exactly incapable. We will show you how to dismantle this Titan move-by-move. By the time we're through with him, they'll have to sell him for parts!

The Selenite Of The Louvre's Attacks 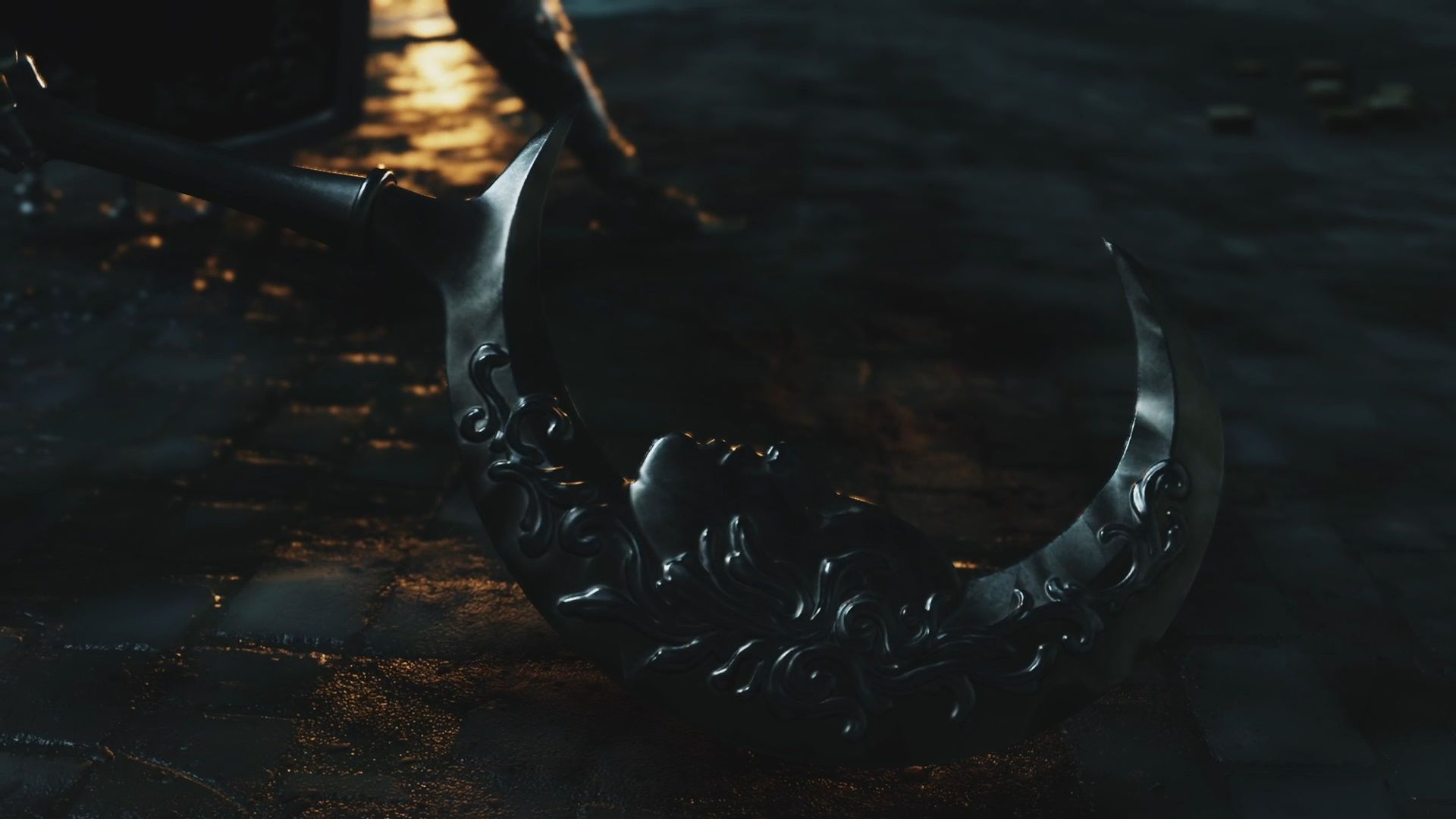 First and foremost, we are going to delve into The Selenite Of The Louvre's wide array of attacks. Unlike the Bishop before him, the Selenite has a pretty healthy arsenal of moves. Thankfully, all these moves have tells, and many of them leave him exposed afterward. Use this section as a reference if you find yourself getting tagged by any of these attacks.

When the Selenite, suddenly dashes away from you, this combo is guaranteed to follow. He will quickly lunge forward with a vertical slash, then briefly stop, charge an attack, and then spin his arms around while dashing towards you once again. The first swipe is easy to dodge once you know it is coming. However, the spinning attack that follows it is pretty rangy. You are going to want to dash backward as quickly as possible after dodging that first attack. 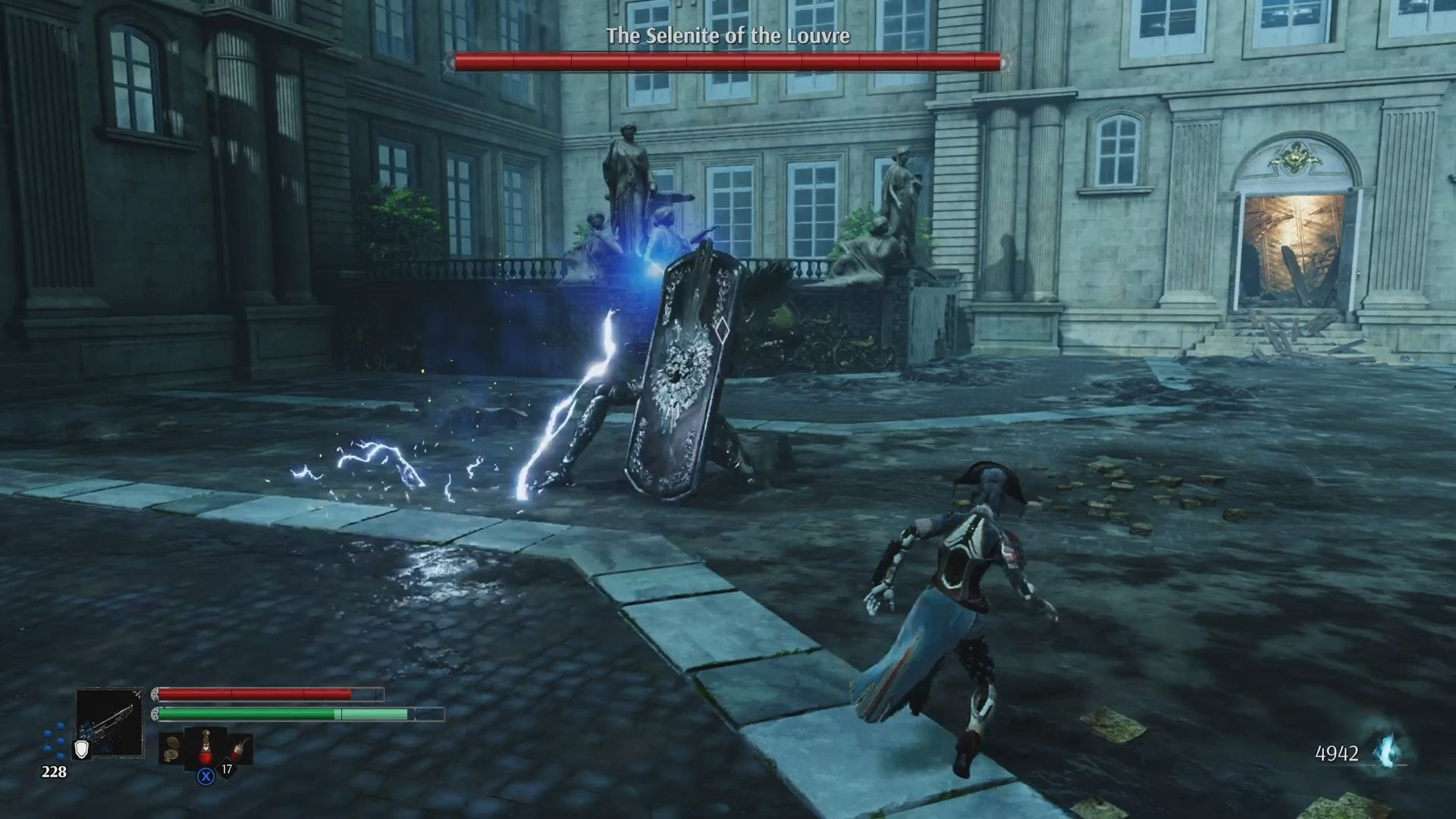 The Selenite will take a knee, shield themselves, and then a bolt of lightning will burst forward from his shield. This attack is pretty slow, so you are unlikely to get tagged by it if you know what is coming. If you are able to circle the Selenite quickly enough, you can attack his back. Otherwise, just keep your distance from him. We only ever saw the Selenite perform this attack in his first form. 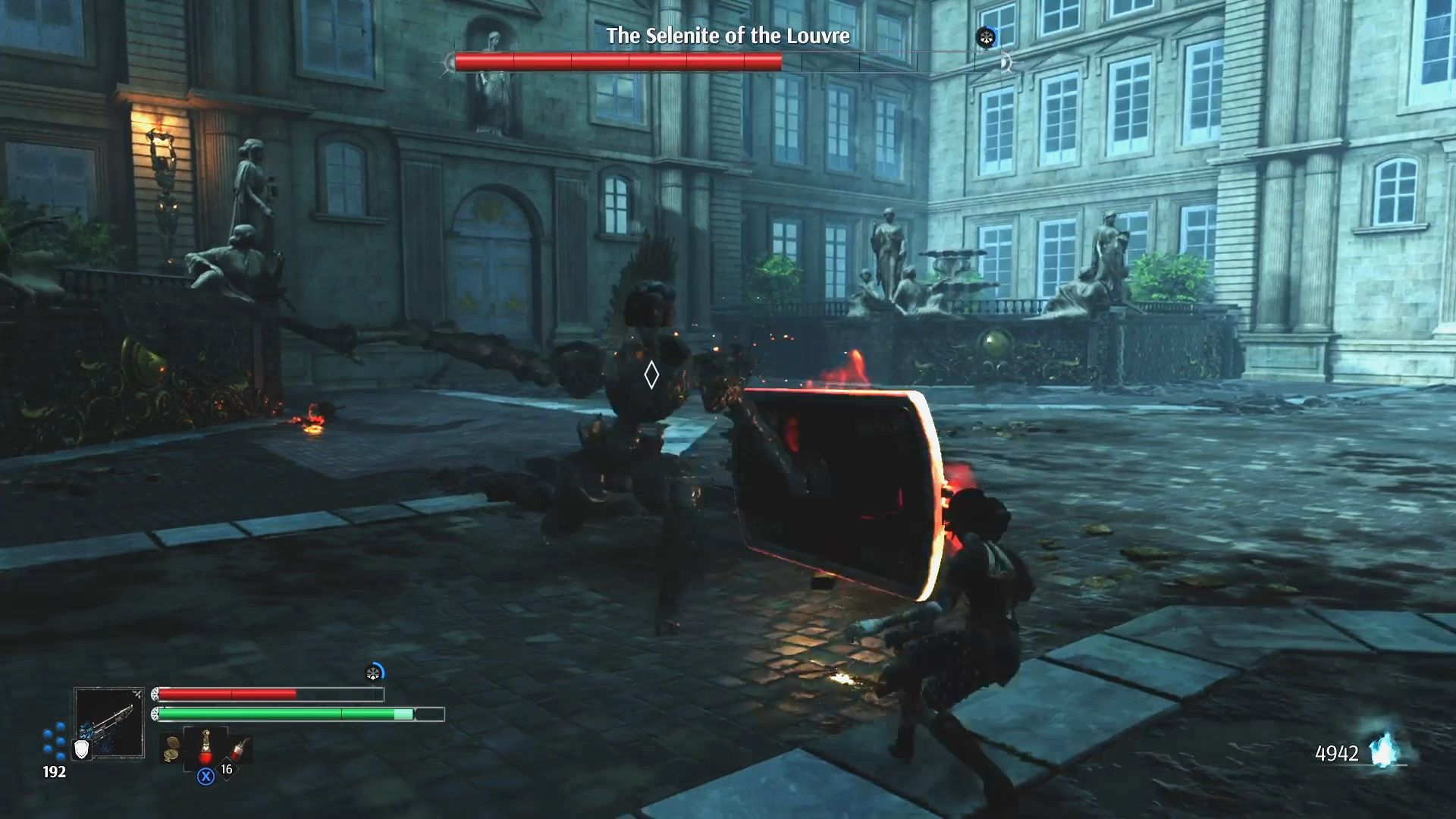 This attack sees the Selenite rear back and then lunge forward with a horizontal slash, and then perform an additional horizontal swipe with his shield. He doesn't move too far forward with this one, so if you are at a distance you should be safe; otherwise, just roll through him. 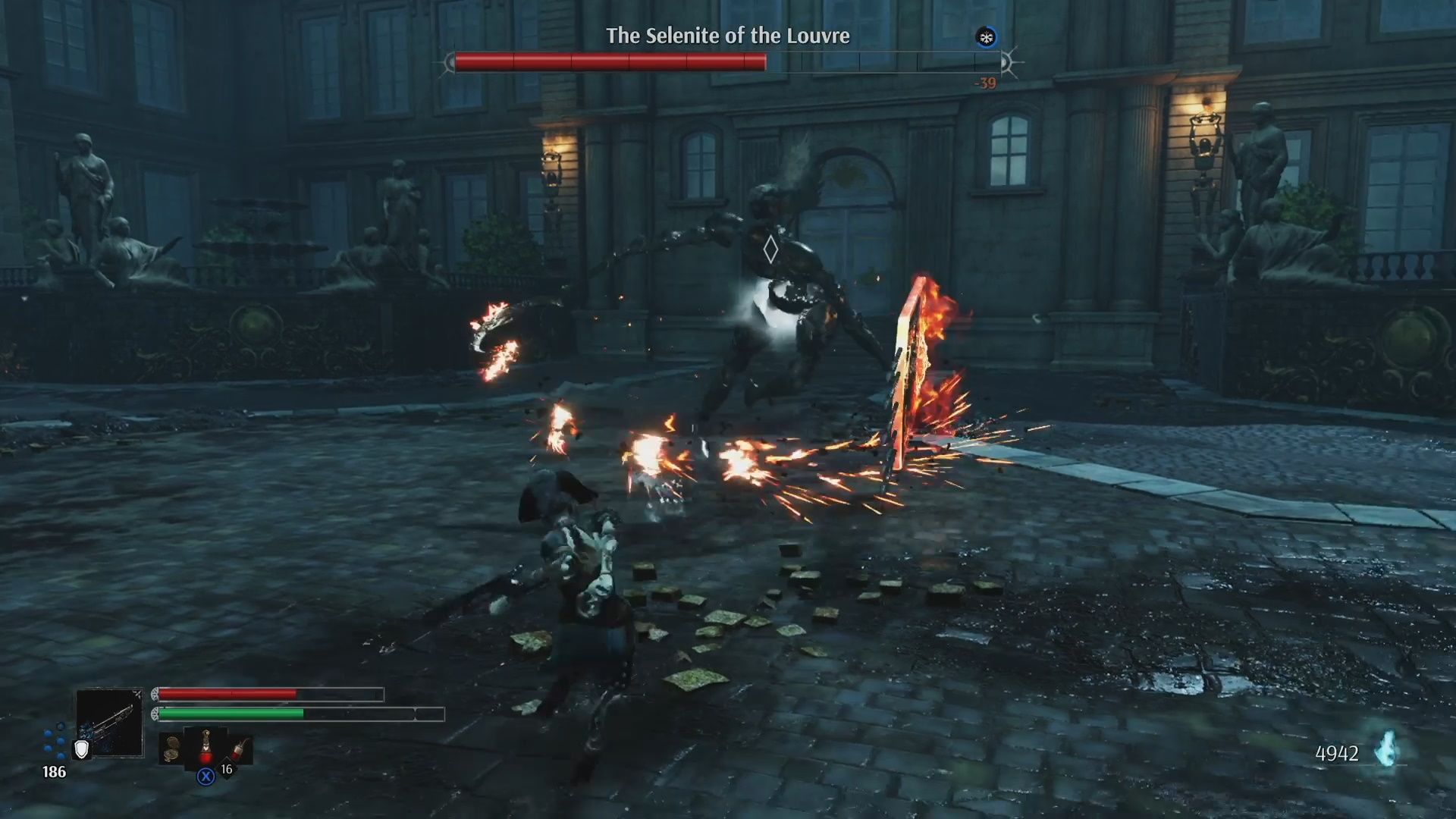 The Selenite will only start performing this attack once he is in his second form. Before he performs this move, he will stand-up straight and raise his sword above his shoulder. Then, the Selenite will lunge forward, spinning his sword in the air, and come crashing down with his shield. The shield will also produce a burst of flames, so if you are in front of the Selenite when he lands, you will take fire damage. The good news is that once he lands, his shield will become lodged in the ground. This is a prime opportunity for you to land a fully charged attack! 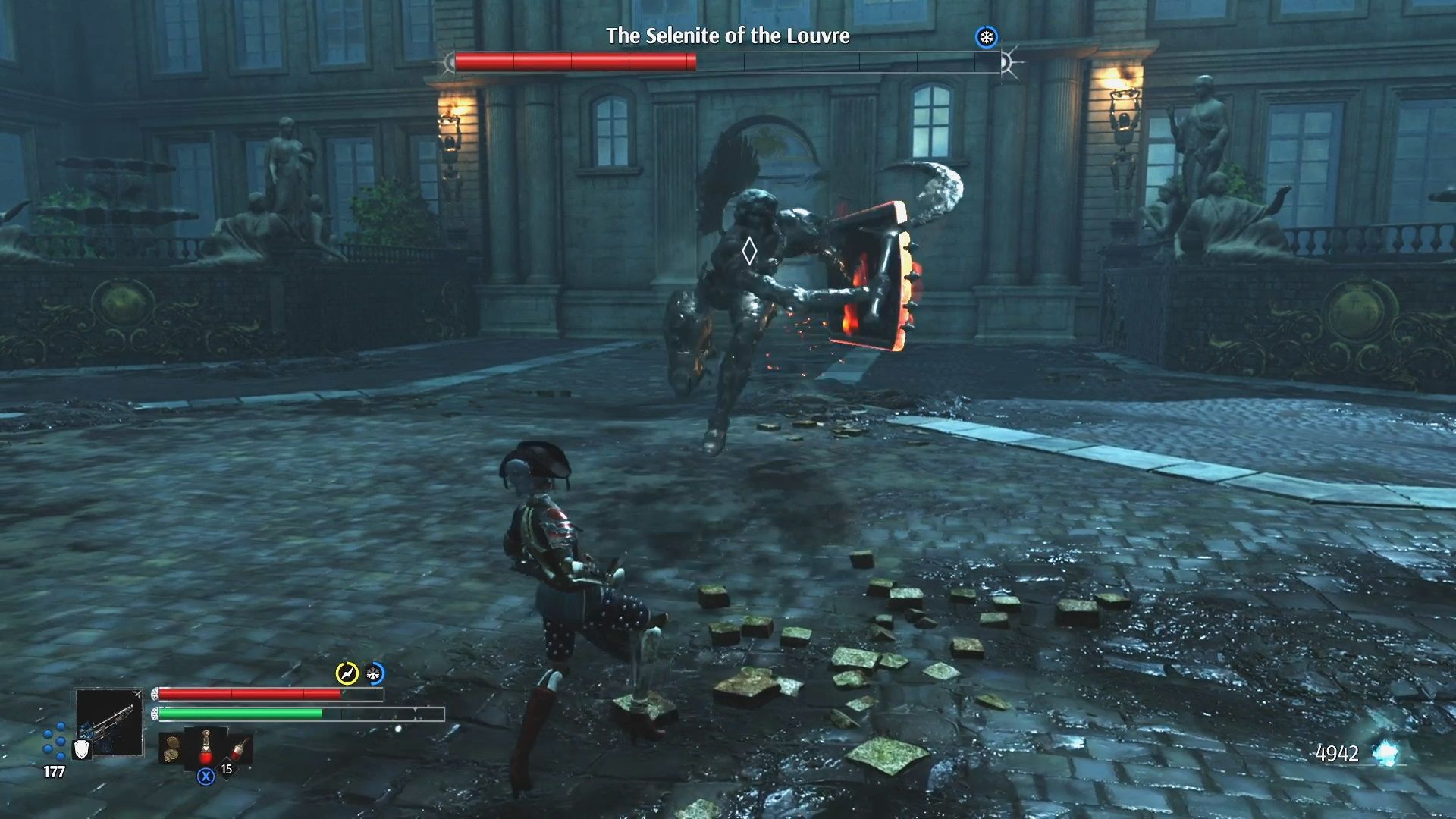 The Selenite will crouch down, pause for a moment, and then charge forward. This attack is super fast and travels extremely far. If you aren't looking for it, there is a good chance you will be hit by it. Thankfully, to compensate for being so fast, it doesn't do a whole lot of damage. If you see the Selenite crouch down, prepare to dash through them, but don't sweat it if you get clipped. 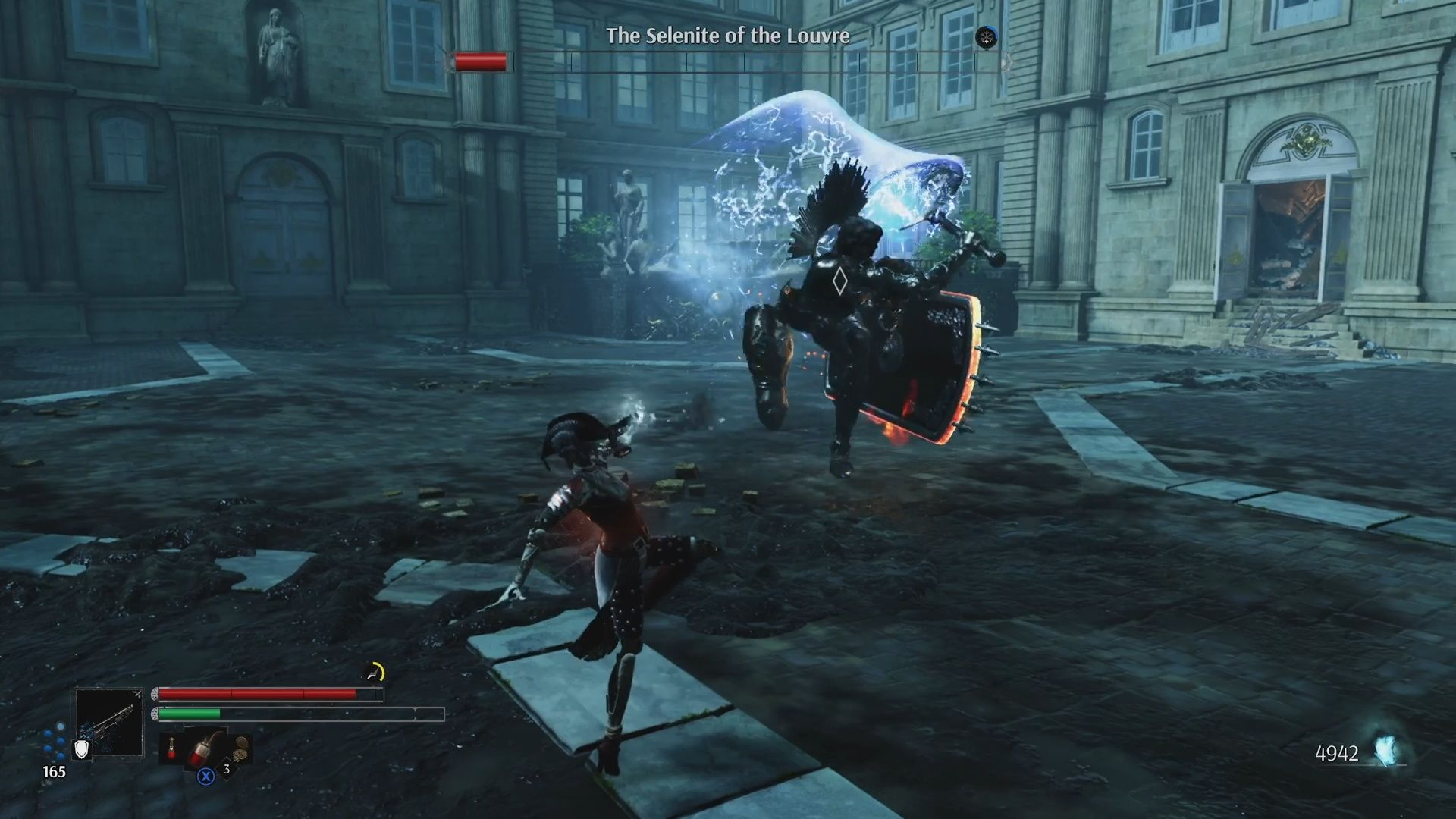 In the final stage of the battle, the Dashing Sword Swipe will combine with the Spinning Blade Dash. It has the same tell, where the Selenite crouches down before pouncing, but it will incorporate moves from the other attack. However, the Selenite ends this attack by flopping over onto its belly (rather pathetically). So, dodge through it and prepare to land a big attack when the Selenite is down. 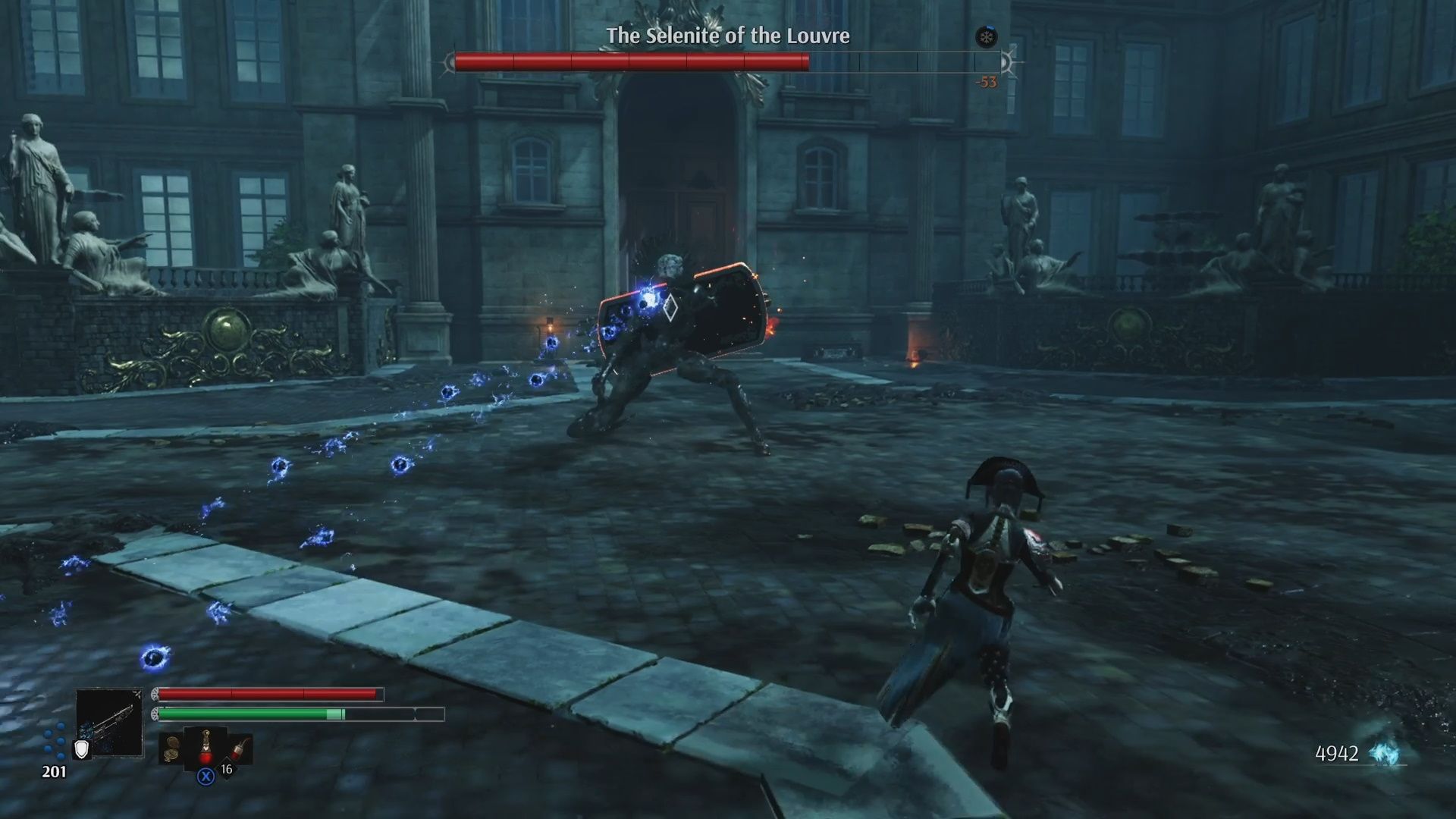 The Selenite starts utilizing this attack once it enters its second form. He will charge the cannon before he fires at you, so you will have plenty of time to prepare to dodge. Just dodge to the side and you will be fine.

In the final phase of this battle, he will start firing multiple volleys, instead of just one. Rapidly dashing to the side will see you through this attack, but if you are low on stamina you could foreseeably get clipped. 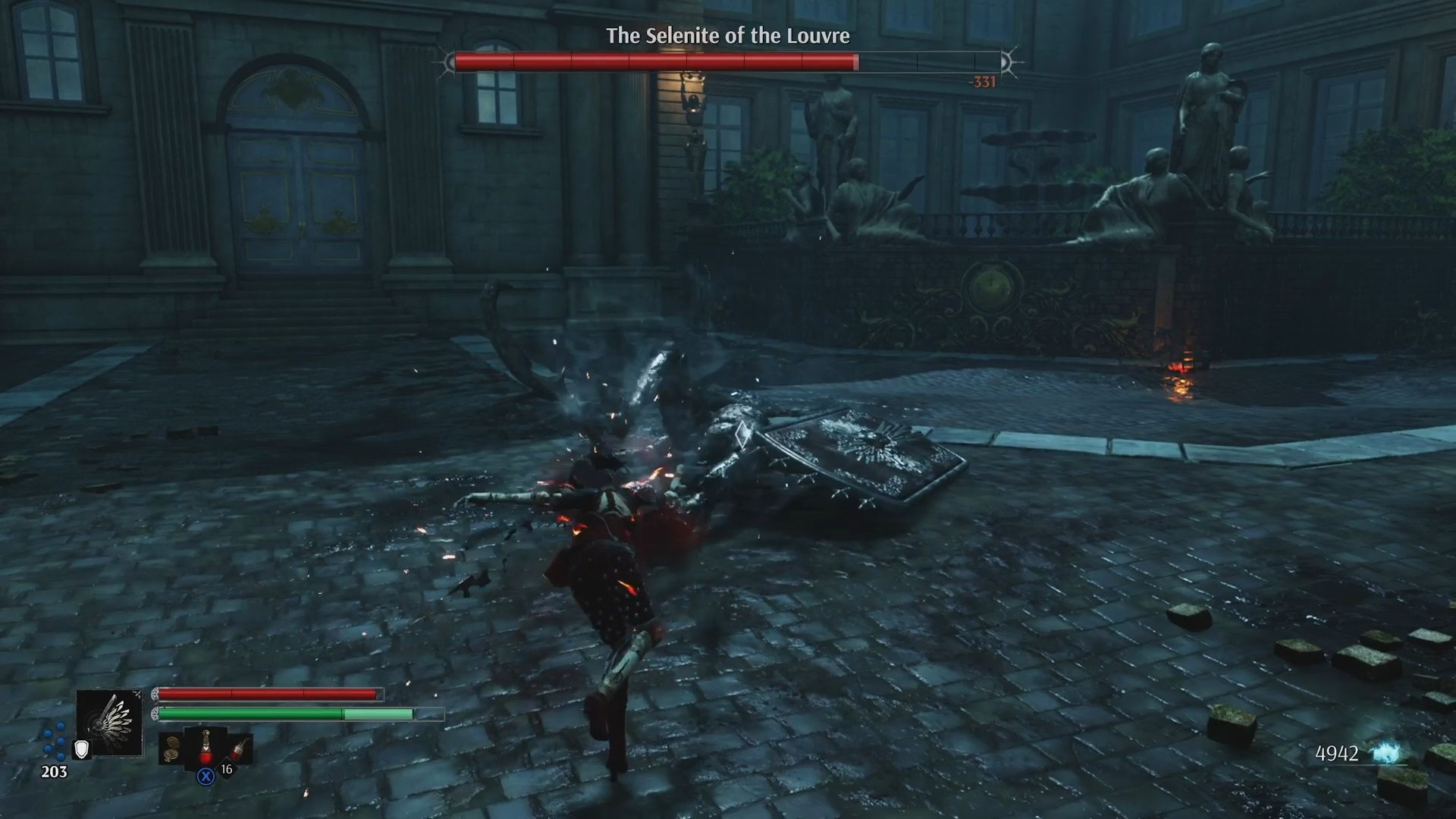 Honestly, we wouldn't say one weapon type is a clear favorite for this fight. You absolutely can stagger the Selenite with a fully-charged attack from a hard-hitting weapon, but the moments where the Selenite is vulnerable are shorter here, so it is a little more difficult to land that fully-charged strike.

Moreover, unlike many of the bosses you have fought, the Selenite moves around the arena with quite a bit of speed, so charging your attacks will often result in whiffed attacks. Still, when his shield is stuck in the ground, or when he has flopped onto his back, you will have time to land the big blows, and they do a ton of damage. At the end of the day, even if fighting the Selenite with the heavier weapons is slightly more frustrating, you really can't undersell the massive damage they are able to deliver with a single blow. 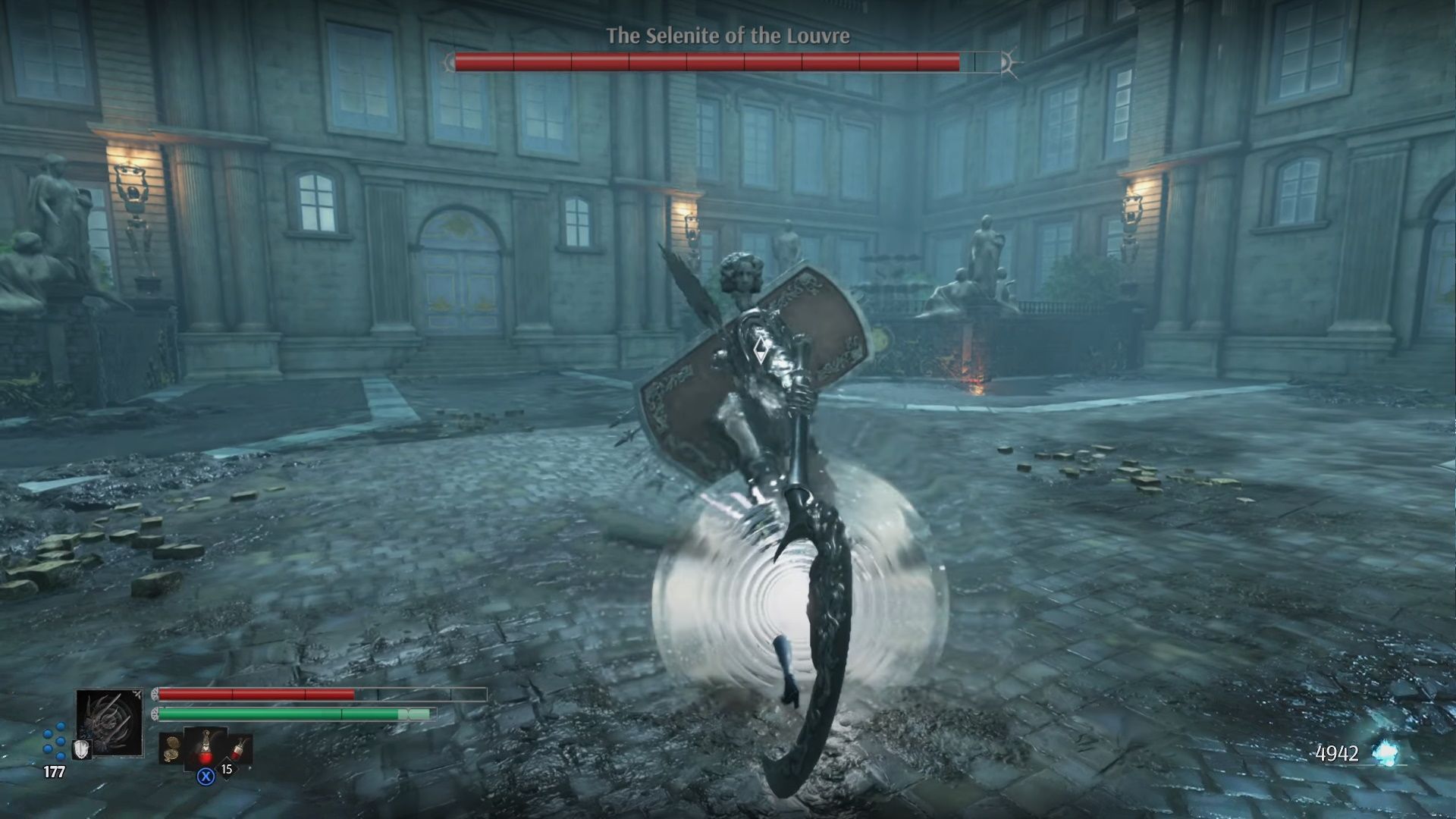 Faster weapons, on the other hand, will be far more capable of tagging the Selenite during some of the shorter recoveries. You will also be in a better position to chase him down, as something like the fans or the claws won't be focusing on charged attacks. If you bring a lighter weapon, we recommend using something that has the counterattack skill, such as the Nemesis Claws. Since the Selenite's attacks are all clearly telegraphed, it makes the counter-attack skill quite effective.

The Selenite Of The Louvre Battle Strategy 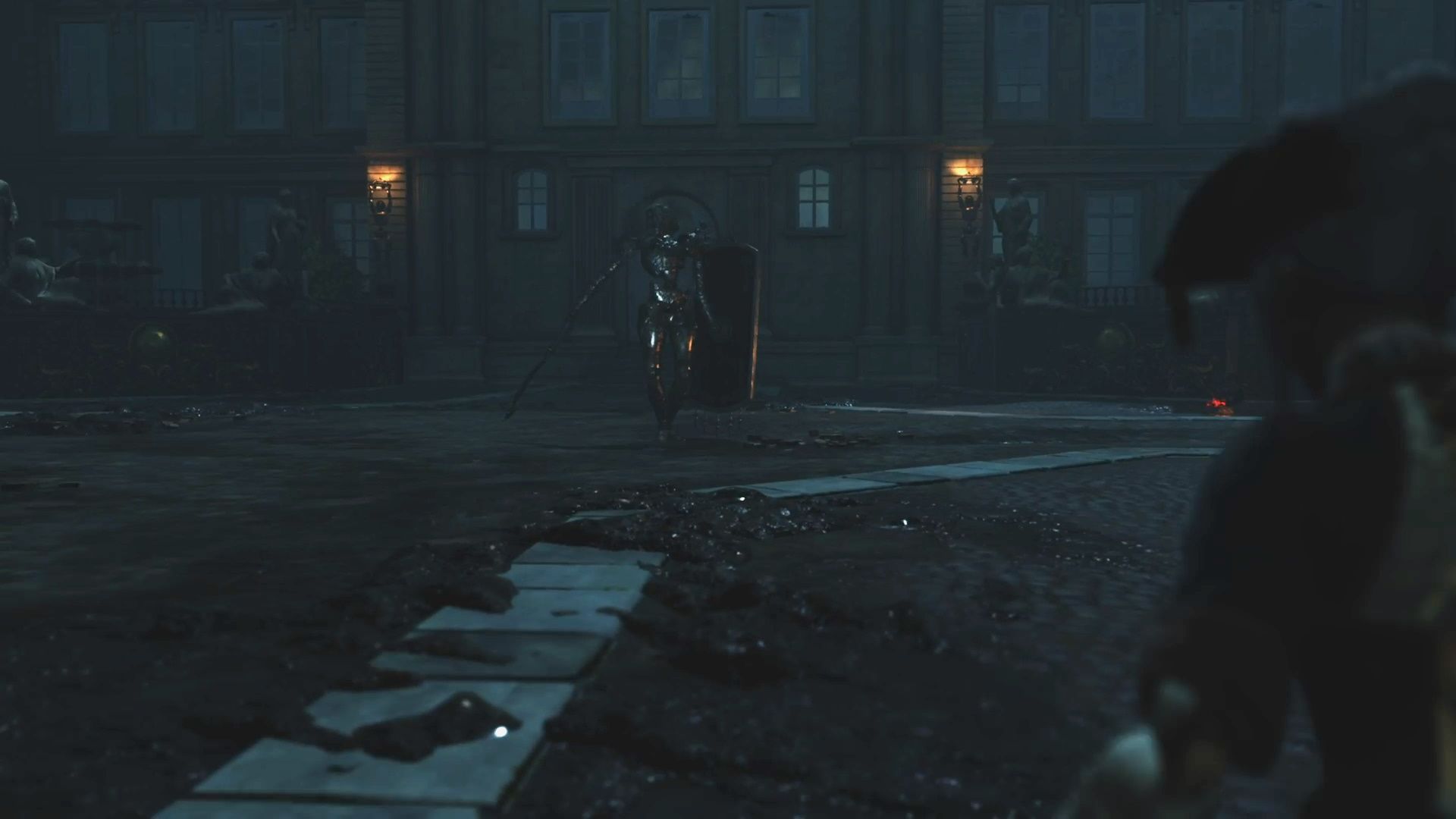 Much like the first Titan fight, this is another three-phase affair. The first phase is pretty simple. The Selenite will slowly walk toward you while trying to hit you with his Shielded Lightning Blast attack and occasionally using his Lunging Sword Swing Combo. You are probably best off just hanging out close to him, waiting for the Selenite to use his Shield attack, then dash around and attack his back. You can also land stray hits as they ploddingly walk toward you. Repeat this step until The Selenite Of The Louvre enters his next phase. 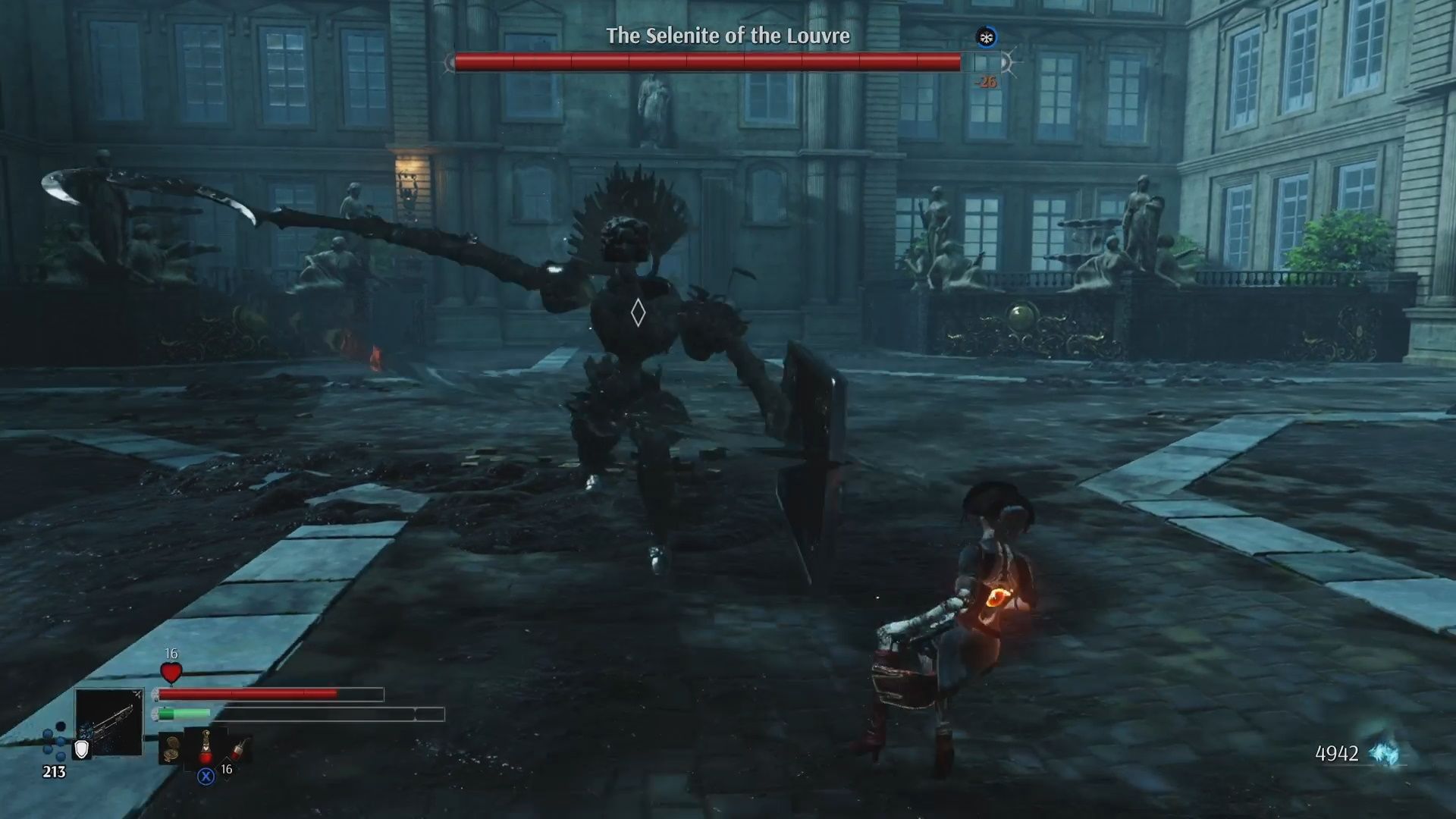 In the second phase you are going to have to deal with a considerably more mobile version of the boss. The amount of dashing he does ramps up. Pay close attention to what he does whenever he pauses for a moment, as it will change the way you should react. If the Selenite crouches, get ready to dodge through them, as they are about to dash at you rather quickly. On the other hand, if he is standing straight up with his sword above his shoulder, then he is about to perform the Spinning Blade Combo which ends with his shield be lodged in the ground. This will be your best time to deal damage!

Watching for these tells is the key to beating the Selenite boss efficiently, as he really does telegraph every attack. During this second phase he will also start to fire his Lightning Cannon at you, but a swift dodge to the side will render this attack completely ineffectual. Keep dodging those dashing attacks, and attacking when he gets his shield stuck. Eventually, he will transition into his third form. 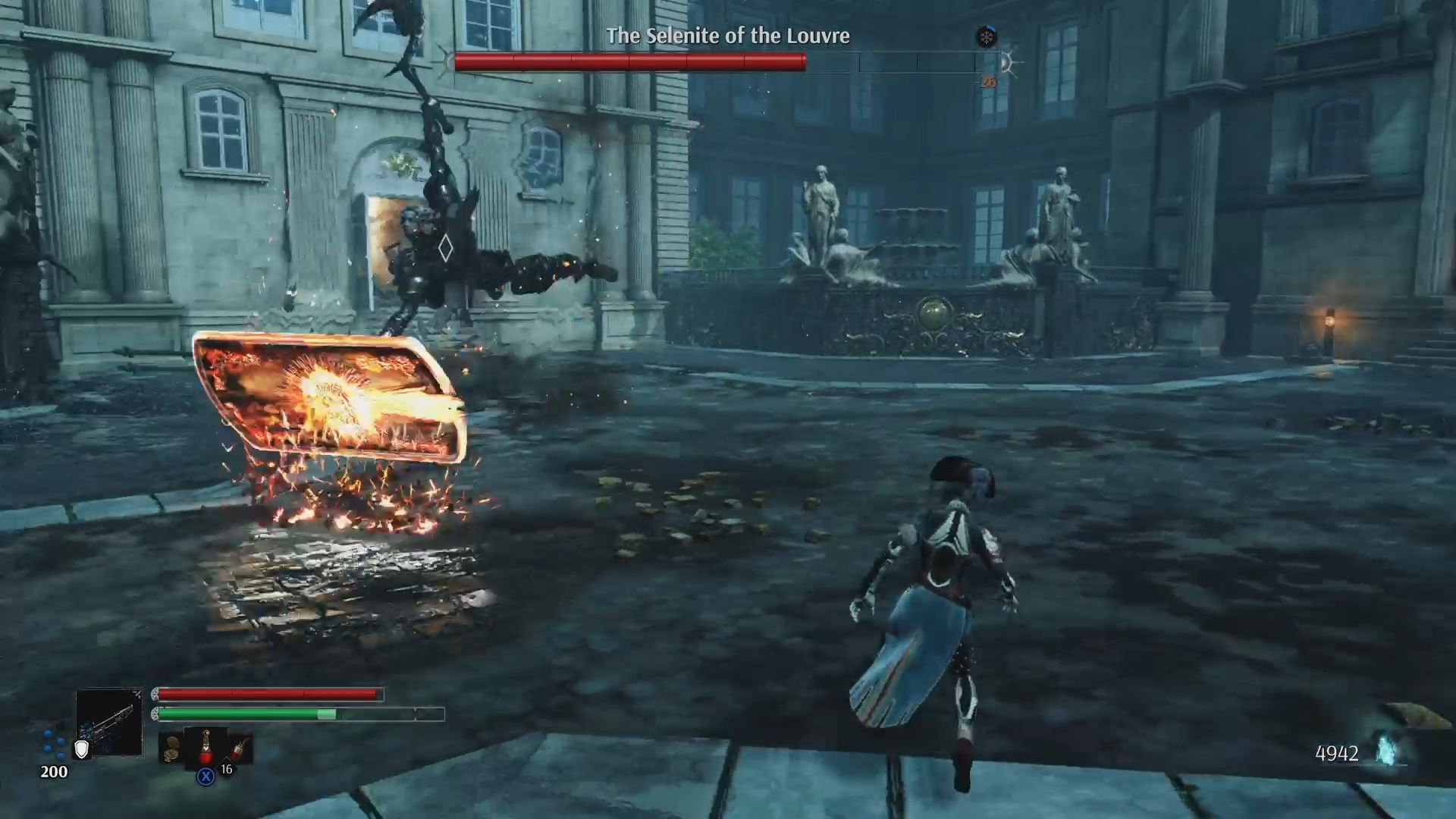 Once The Selenite Of The Louvre has been whittled down to about a third of his life, he imbues his sword with lightning, and all his moves become enhanced. The Lightning Cannon will now fire multiple volleys instead of just one, the dashing attacks are quicker, his attacks will hit from farther away, and being hit by his sword will now apply the lightning effect. The frequency of dashing attacks he uses will also increase. So, you will be dodging quite a bit in this final phase. 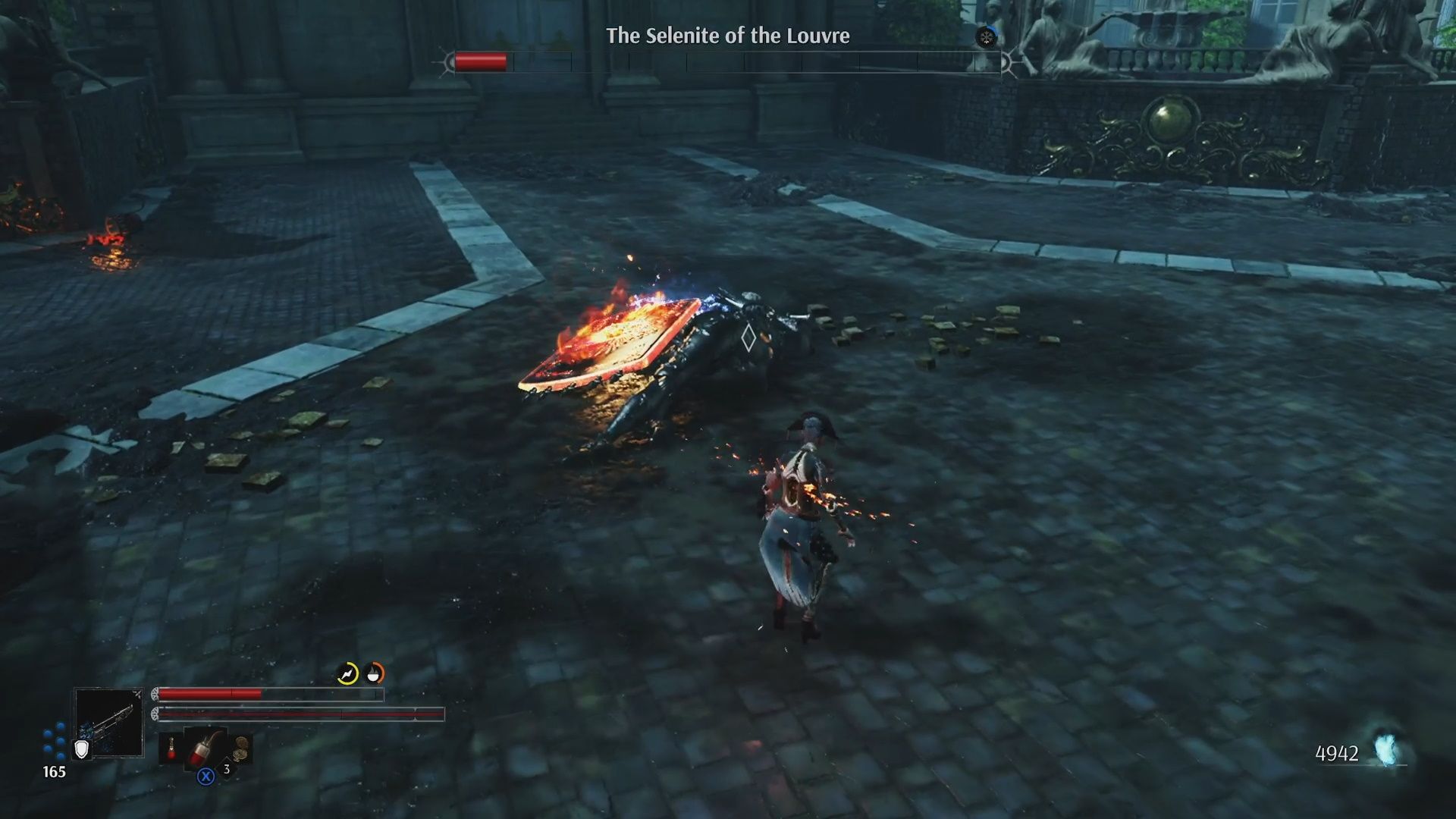 While this all sounds pretty intimidating, the Selenite will now start to fall over when you dodge his (now greatly enhanced) Dashing Sword Swipe attack. And he uses this attack quite frequently during the final phase. So, if his aggressive attacks don't take you out quickly, he isn't going to last long himself. Either way, the battle will end soon after he enters into his third phase; one way or the other. 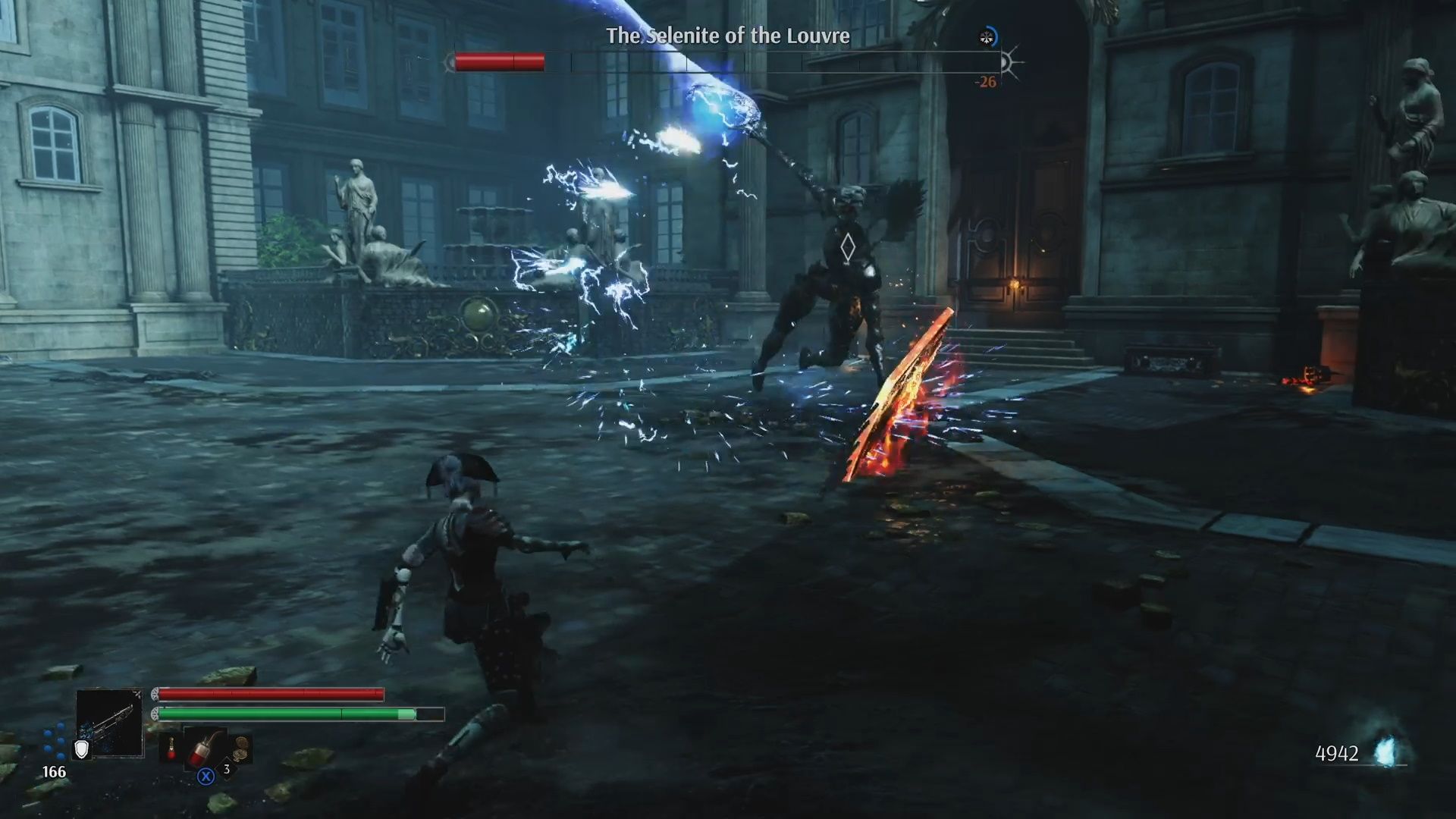 Just look for him to enter into that crouching state, meaning that dashing attack is coming, and prepare to dodge. Once he falls to the ground after missing you, wail on him with your most powerful attacks. He likely won't survive more than two repetitions of this sequence.

The Easy Way To Kill The Selenite Of The Louvre 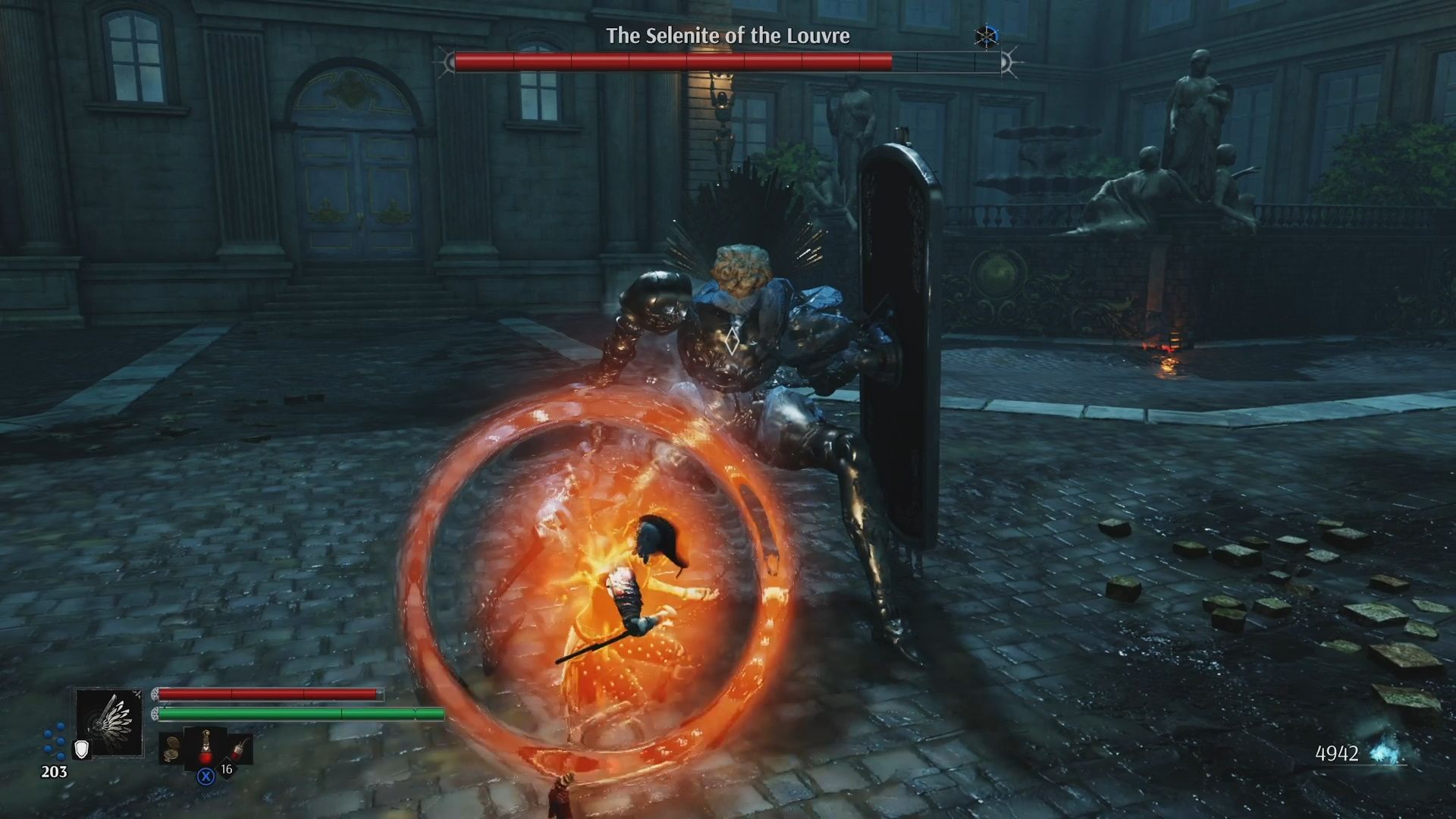 Our old friend the Shielded Musket is still your go-to weapon for mitigating the difficulty of The Selenite Of The Louvre. However, it isn't quite as cheesy as it has been in past fights. For starters, the Selenite is way better at chasing you down, so you can't just shoot them at a distance without a single care in the world. However, while you will have to pick your shots a little more, it is still the same old approach. Shoot them until they freeze, then hit them with a fully-charged attack from your hardest-hitting weapon.