When you fight Astos in Stranger of Paradise Final Fantasy Origins, you are close to completing the main story. This challenging boss fight tests everything you have learned in the game. All Jobs can defeat Astos, and you must be prepared to go against fast strikes and powerful combos.

At this point in the game, you may still be experimenting with many Jobs and builds, but it will be best to fight with the Jobs that fit your style against Astos. Both phases of the fight are very aggressive and require you to play the same way to end the battle. 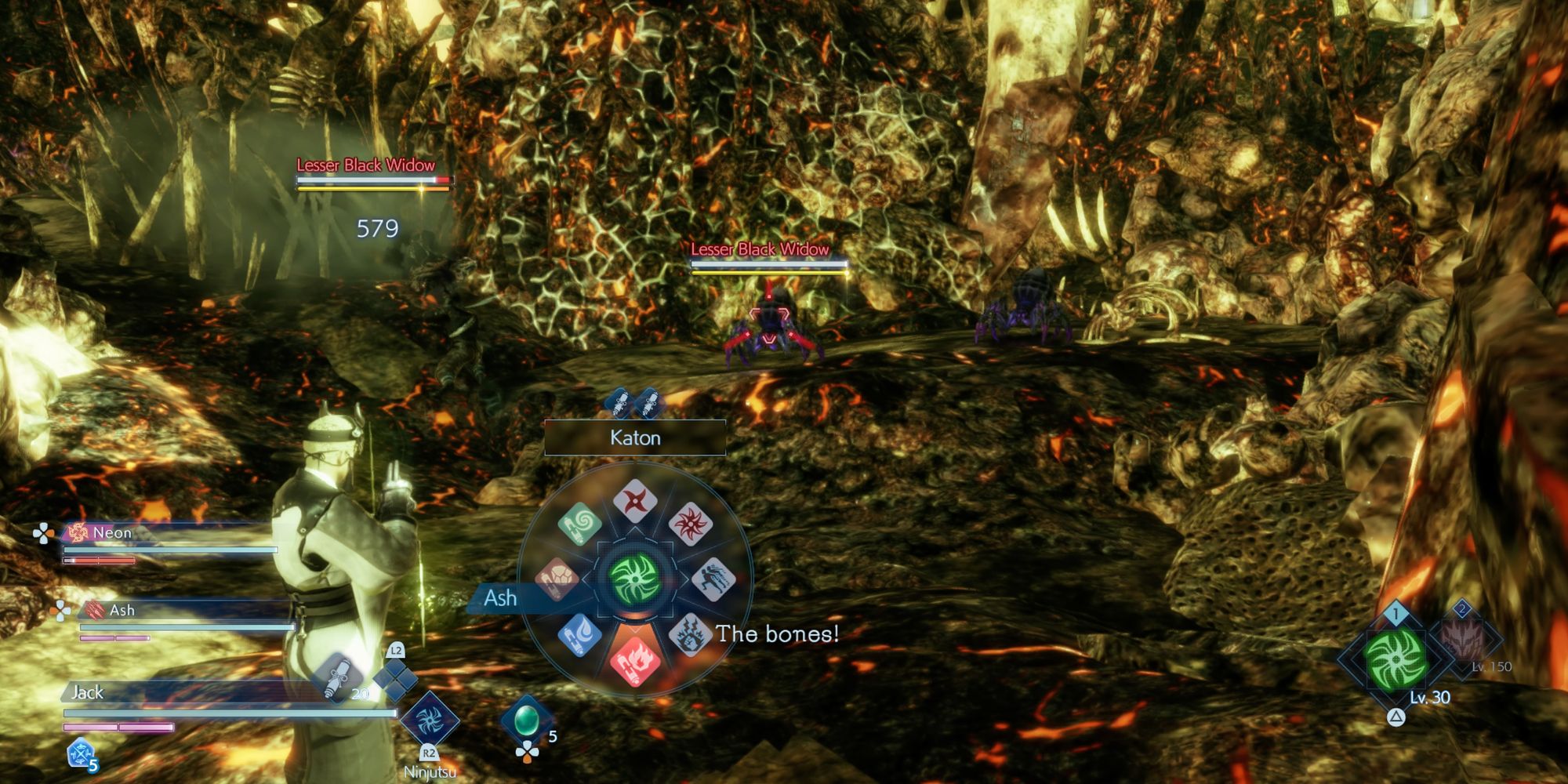 The fight with Astos takes place on The Suffering of Fool's mission in the location Terra Tortura. The location can be confusing and is littered with bone traps that spike up from the ground.

The giant ominous tower in the background is where the boss fight occurs. In the level, you will go through three separate paths that end with Dark Vents to unlock access to the door where Astos is located. 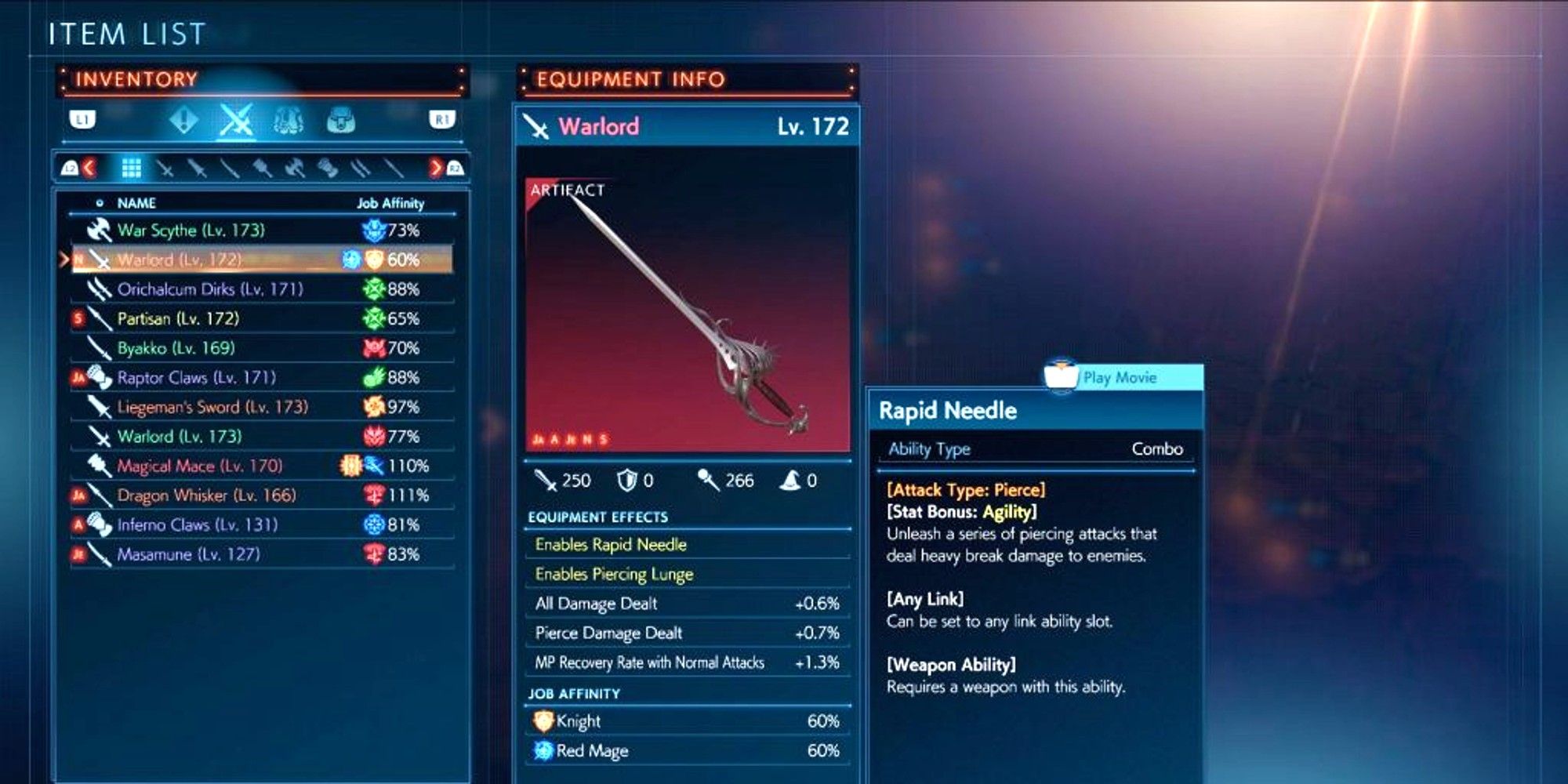 Both phases of the fight can be difficult. The boss is quick to attack, so finding your window to attack is critical. The boss has no weaknesses and is resistant to all forms of melee damage.

You will have to juggle staying healthy while dealing damage. Your teammates are vital in the fight. The use of Resonance will help with damage and also give you room to attack from behind.

Ensure you have a dedicated healer in your party, as you will need it. 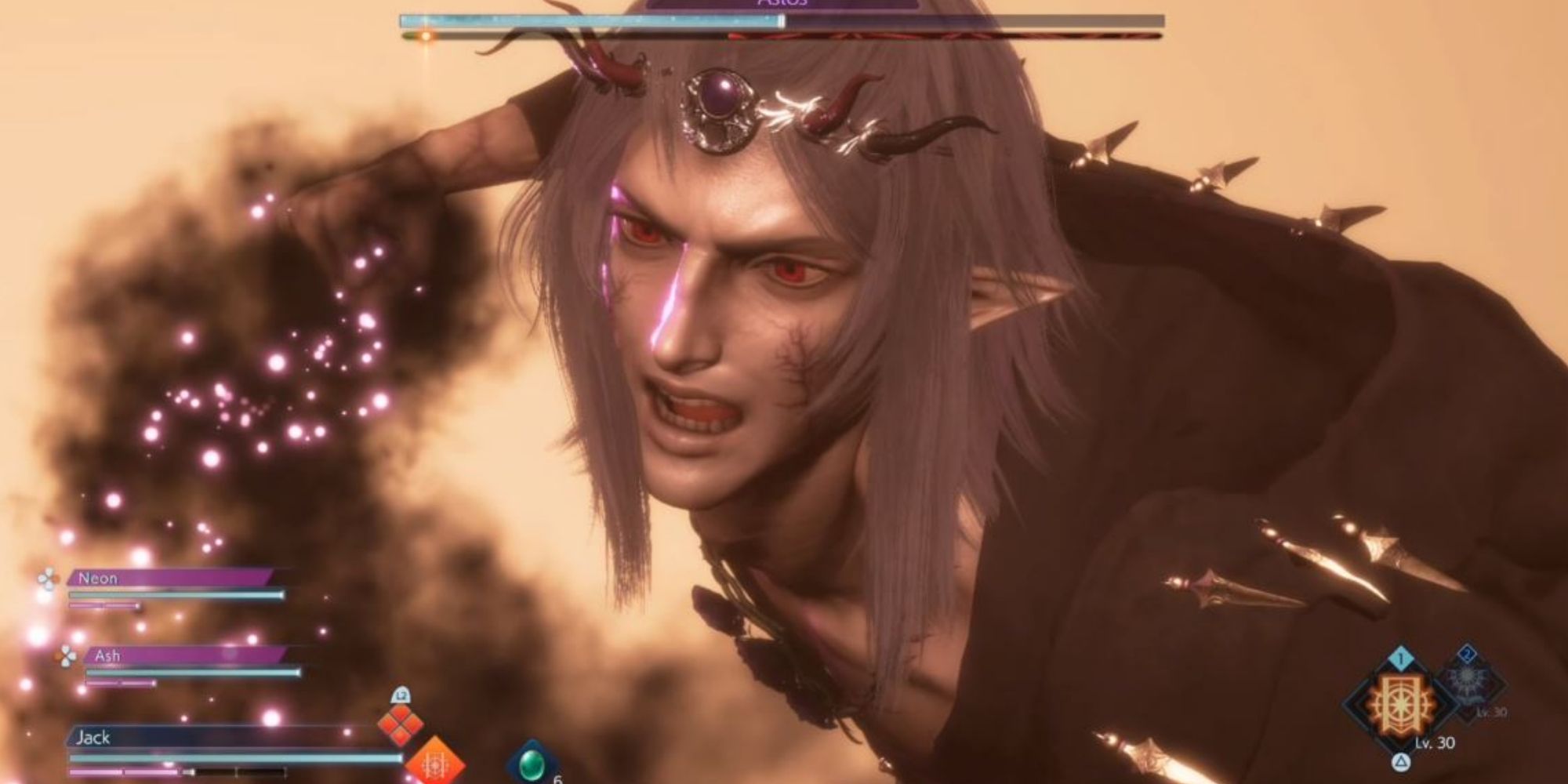 Astos may appear to be a frail magic caster, but he can be just as devastating in melee as he can be at range. The test of Astos is managing the Break Gauge, especially on the hard difficulty. He can string together powerful combos.

A deadly attack from Astos is his teleportation, which will not have a name if he kicks. Sometimes he will teleport and use the attack Dark Slash.

Both attacks can be brutal to react to. Due to Astos teleportation and spells, you may find it difficult to cast your most potent spells.

Other moves you need to be aware of from Astos are Dark Hammer and Dark Surge. Dark Hammer is typically used by Astos as a combo finisher. If he breaks your Break Gauge during one of his combos, you most likely meet the flat end of his hammer.

Dark Surge is a ranged attack that puts you into a down state once it hits it. Sometimes he will use this move twice a row and then usually begins a combo.

There are a handful of vital opportune times to attack Astos. With his purple attack, Dark Thrust, instead of Soul Shielding, you can run towards Astos and attack him for a few hits. Another critical opportunity to attack Astos is after he uses Dark Hammer.

Astos has a recovery animation after the attack; if you are quick, you can steal a few blows. The attack Cremation, this move is one of Astos's "get off me tools."

There is a delay before the attack takes effect, with dark flames. So avoid using your Soul Shield when you see the attack's name.

You still have a moment where you can do some damage. There are many other times to attack, but the boss fight can be a test of finding that moment to strike. 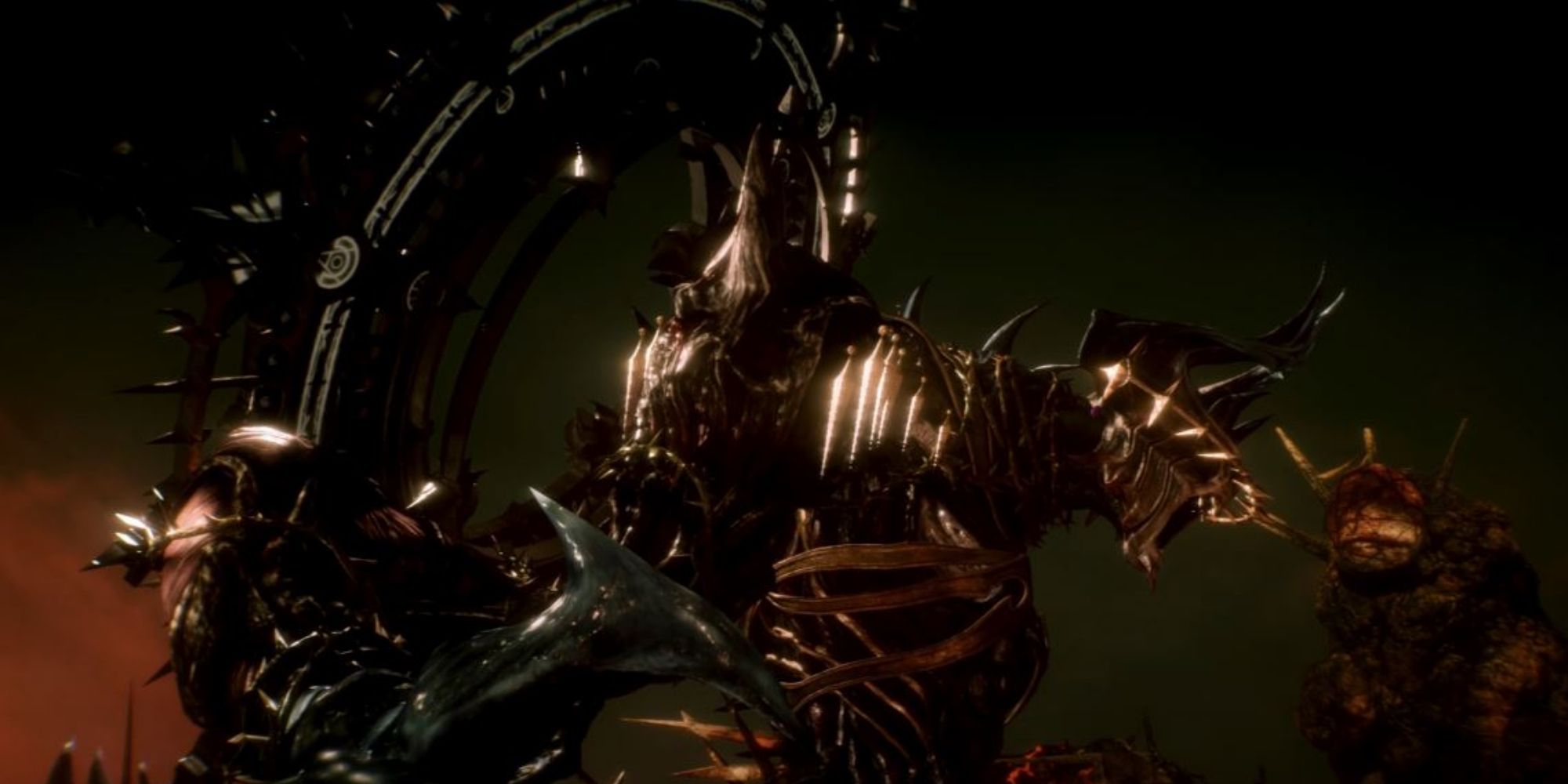 The Ultima Weapon is also a test of managing your Break Gauge. Just like Astos, it is a combo fiend. Its weakness is its size, and it is arguably easier than Astos. This boss can be fought aggressively. If that is your preferred play style, you will find many opportunities to attack the Ultima Weapon.

The Ultima Weapon can attack from every direction; it can still do spells like in the first phase. A magic-focused Job is more usable in this phase of the fight. Unlike the previous form, it is obvious to see who it is attacking, giving you time to cast spells. The biggest issue with the boss will be the deceptive range of its attacks.

The Ultima Weapon will attack a lot with two frontal claw swipes to start his combo. The combo usually ends with the unblockable charge attack Full Power. So be careful Soul Shielding the two-claw attack can leave you vulnerable to this attack. Also, Full Power might not be the end of its combo. The Ultima Weapon could go into its grab attack Dark Calamity, or a powerful beam attack, Flare Star.

Dark Calamity and Flare Star can come out very quickly. Avoid staying close to the walls and corners, so you can see the attack names above its head.

Attacking at its sides or back is recommended, but it can attack with multiple AoEs to protect itself. The boss will usually respond by jumping away and using Shadow Flare.

The Ultima Weapon can also react with Energy Emission, which surrounds it. You can also attack from the front, but the boss will attack with a two-forward stomp attack that can test the limit of your Break Gauge. 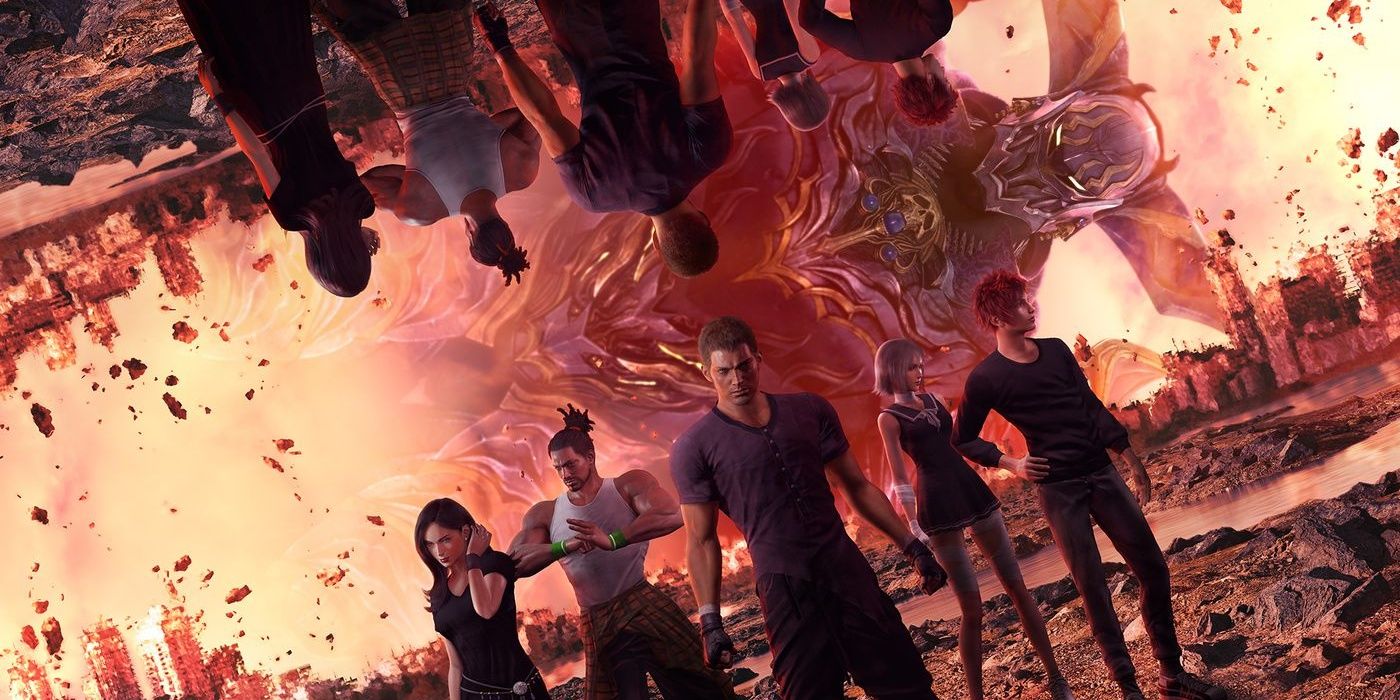 Here are five classes and command abilities to help you win the battle.

This Job has very situational strengths, but against Astos, it shows off its potential. Its job action, Runic can deal good damage against Astos. The Job Action also helps with managing your break gauge against magic attacks.

As for command abilities, while Runic protects you from most of Astos's attacks, you should focus on more ways to protect yourself. Runic Protection, which comes from the Void Knight damages job tree, takes from your mana bar instead of health. So while you are absorbing attacks, gaining a mana supply will help you keep healthy during the fight.

While the Job can seem complex with its Ninjutsu, it is a reasonably easy Job to use and provides a damage evasion Jutsu. Utsusemi gives a buff that allows you to bypass damage from three attacks. The Jutsu costs two tools; if you have yet mastered the Ninja Job, that is still five times you can activate the Ninjutsu.

Command Abilities will depend on your play style. If you wish to play as a true ninja, you can select Invisible and Bravery. Invisible gives you less chance of being targeted and a critical hit bonus. While Bravery gives you and your allies increased damage and Break Gauge recovery.

The Dragoon's Job Action Jump will help you stay in the fight when Astos teleports away to launch his magic. The action also works as a gap-closer and is instrumental as an escape tool. While in the animation in the air, you cannot be attacked. If you find Astos or the Ultima Weapon's pressure too tricky, you can use this Job's mobility to keep the pressure on them.

Your command abilities should be focused on doing damage as well as giving you some healing. Blood Weapon with Jump will provide a quick health boost when you get low. You can pair it with Lancet and Mighty Strikes to do more damage and get more healing from the Job Action.

This Job is recommended for an aggressive play style. The strongest ax you can equip works well with the Job Action Berserk. Another bonus with the Berserk action is that it increases the damage and decreases Break Gauge damage. The goal of this Job is to run up to the boss and hit him with a powerful charged combo ability.

When you do enough damage with a powerful attack, you can stagger the boss and get another free hit.

The best command abilities for this play style are Reinforce, Lunatic and Mighty Strikes. Reinforce and Lunatic will increase the charge speed of attacks and combo abilities. Mighty Strikes can be replaced with Blood Weapon if you are struggling with health.

Despite being a defensive job, you can play Swordfighter very aggressively. This beginner class's Job Action Interception is a powerful skill. You can use the Job Action best by staying close to the boss for the counter to hit to be effective.

This Job will help with the Ultima Weapons tail swipe from his back and his orange attacks. Interception can interact poorly with his two-claw swipes attack, so be careful.

For Command Abilities, Counter is a must. Your Break Gauge will still be affected by attacks under Interception. For the other two abilities, you can use abilities that focus on damage, such as the Lancet and Mighty Strikes Combination. You could also use Summon Tachi if you are confident in your survivability.