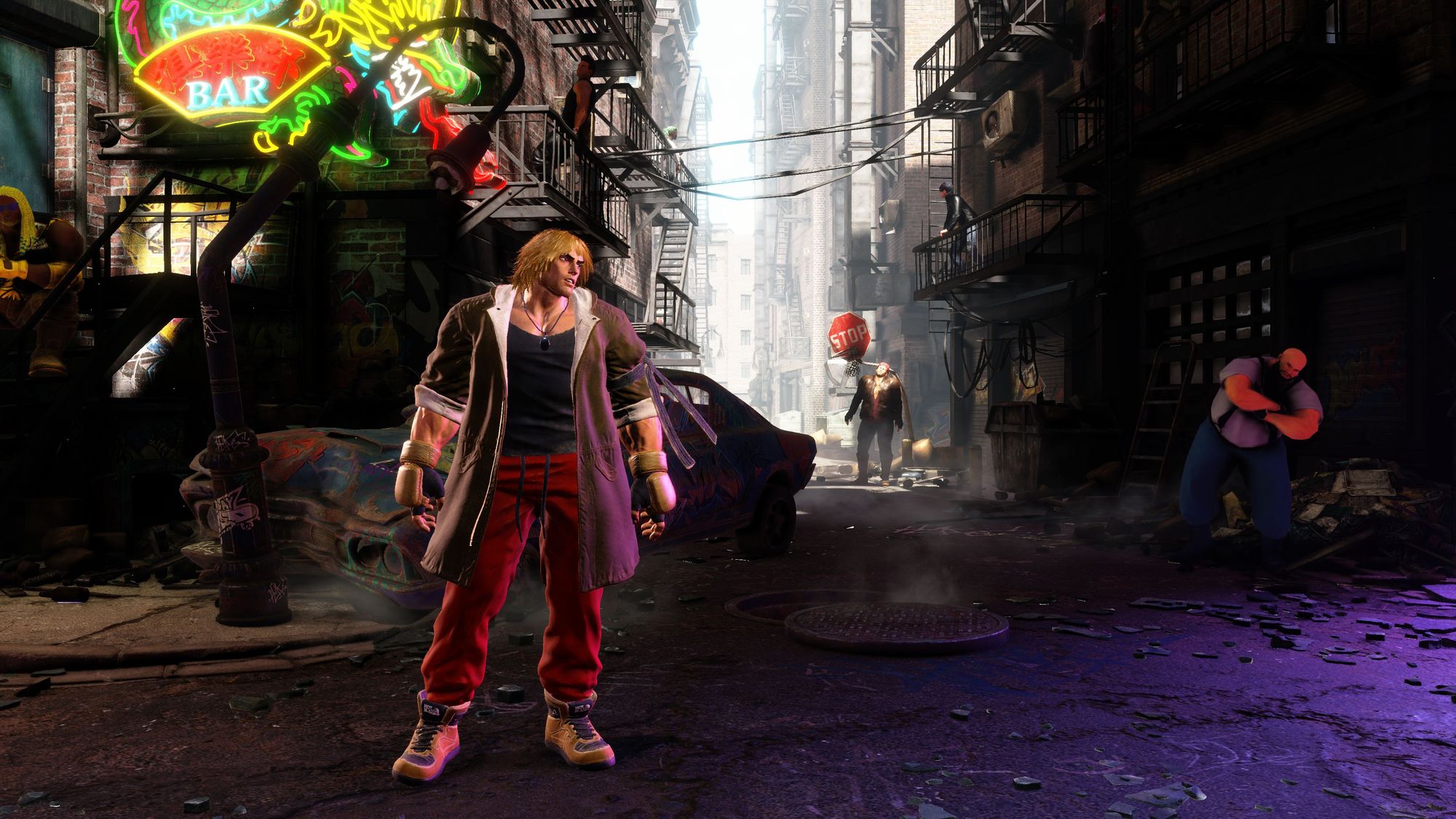 GameCentral gets to play Street Fighter 6 for the first time, with a look at eight different characters, including the newly revealed Ken.

It’s a fact stated at the start of almost every preview or review, but fighting games have always been the hardest genre to innovate in. At least in racing games you can change the setting and level of realism, to create notably different experiences, but fighting games always come down to just two people punching each other. The problem becomes more acute with every sequel but that never stops either the developers or the fans, and after playing Street Fighter 6 it’s easy to understand why.

Although there’s strangely been no sign of a next gen Mortal Kombat yet, Tekken 8 was unveiled just this week and MultiVersus has already proven itself a surprisingly successful clone of Super Smash Bros. Street Fighter 6 was always an inevitability but while it immediately suffered a leak of all its characters it was less clear what sort of direction it would take in terms of gameplay.

The answer to that question is not an exciting or surprising one, with accessibility, ease of play, and avoiding the mistakes of Street Fighter 5 being top of the list. This is not a sequel attempting radical change but regardless of whether that’s even necessary the most important fact we’ve been able to discern, from our hour or so playing Street Fighter 6, is that it’s the most fun we’ve had with the series in a very long time.

If you were unaware, or had forgotten, Street Fighter 5 suffered a terrible launch, with poor online performance and a serious lack of content, especially in terms of single-player modes. We can’t really speak to the latter yet, but Capcom has teased a substantial story campaign, with open world environments, that they’ll no doubt reveal in full later.

We also don’t know whether there’ll be any online issues in the new game, but we’d be shocked if Capcom made the same mistake twice. Instead, what we got to play was a number of standard two-player matches with a choice of eight characters: the already confirmed Chun-Li, Guile, Jamie, Kimberly, Juri, Luke, and Ryu, plus the newly revealed – for the Tokyo Game Show – Ken.

We started off with Ken, dressed in some tatty street clothes, who has long since evolved beyond just being a clone of series frontman Ryu. He still has all the same basic moves, including the iconic Hadoken, but on top of this is a very handy dash move, which can be interrupted by any of the three power levels of kick – with a number of other characters having a similar ability.

Everyone has their own unique abilities as well, not just in terms of normal and special moves but gimmicks such as the ninja smoke bombs of Kimberly and Jaime’s ability to take a swig of booze to expand the range and power of his attacks, with the fourth and final one leaving his carefully plaited ponytail in amusing disarray.

A ninja and a drunken master are some of the oldest cliches in the fighting game book but both characters are immediately endearing, with Kimberly’s bubbly personality making her instantly likeable, while Jamie subverts the trope of his sort of character always being a doddering old geezer.

Luke is the other new character in the line-up and the de facto mascot of the game, although he was also the last DLC addition for Street Fighter 5, so you may have played him already. He’s just as obnoxious as he seems from the trailers, and we don’t know if he’s that way on purpose or if Capcom actually thinks he’s cool. However, as bland as his visual design is, he is an enjoyable character to play as, with a fast, long range projectile attack that’s very easy to pull off with the series’ signature quarter circle special move controls.

If you can’t pull that off consistently enough there is an alternative ‘modern’ control option which works a little like Super Smash Bros., in that you only have to push a direction and a single button to activate special moves. We’re in two minds as to whether that discourages learning the controls properly but it’s certainly easy to pick up and allows anyone to play the game with almost no learning curve.

Similar options have become increasingly commonplace in modern fighters, but the most interesting new element of Street Fighter 6 is the Drive System, which incorporates five different moves powered by the Drive Gauge meter. The most interesting of these is the Drive Parry which, despite what the name implies, you can just turn on by pressing the two medium attack buttons and sit there with it turned on, taking no damage.

The only way to get anyone out of it is a grab, so it’s a great way to take a breath and get your bearings, while giving you no real advantage unless someone attacks you. The Drive Impact attack is also very useful as it simply requires you to press the two heavy attack buttons. This not only does significant damage but also look great, with a giant swatch of colour sweeping across the screen.

This underlines the power of the attack but it also connects Street Fighter 6 with it’s more cartoonish roots, given the overall art design is a little more realistic than Street Fighter 5.

We played as all the characters in turn and even the ones we’ve never main-ed before, like Guile and Juri, were very easy to pick and play, and full of new tricks and twists. The first lady of gaming has always been a favourite though and while we still miss performing the Lightning Kick by just jabbing the button, Chun-Li’s animation is particularly expressive throughout.

That’s the nuts and bolts of the game: Street Fighter 2 once again reimagined for the modern world, except this time as something more accessible and with all the expected features from the start. This includes a new commentary system, featuring famous faces from the esports scene, which works similarly to something like FIFA but can also throw in useful tips and hints as you play.

Even at this early stage, Street Fighter 6 seems to tick all the right boxes but the most abiding impression from the hands-on is simply how much fun we had playing it.

Neither us or the journo we were playing against had played Street Fighter for a while and yet we were immediately able to jump in and pull off some relatively complex moves and tactics. The action is fast, always easy to read, and, at the moment, seemingly well balanced – with all of our matches lasting an enjoyably long time, with no sign of overpowered moves.

Ending one particularly close fought fight with an aerial double K.O., that the game judged we deserved the win for, was one of the most entertaining gaming moments we’ve had all year, and you don’t normally expect that from your first fumbles with a new fighter. There’s still plenty of ways Street Fighter 6 can snatch defeat from the jaws of victory, depending on what state it launches in, but the magic is still very clearly there.

If you’re interested in giving Street Fighter 6 a go yourself, you can sign up for the game’s first closed beta here.