Before Rapture there was Fairview. This fictional North American city is the setting for SWAT 4, a tactical FPS created by the same studio that made BioShock. That's right: before dragging us down into the depths of Andrew Ryan's doomed utopia, Irrational was developing cop games. Not a lot of people remember SWAT 4, which is a shame because it's one of the best games on PC. But it's also interesting because, despite the wildly different subject matter, there are traces of BioShock in its design.

In some respects, SWAT 4 is like any other tactical shooter. It's a game about commanding a squad, surveying the environment, formulating a plan, and executing it with brutal efficiency. The crucial difference here, however, is that you're not a soldier. You can't just run in and gun everyone down. You have to follow protocol, only fire your weapon if someone shoots at you first, and subdue rather than kill suspects. It's an unique take on the genre, and as you might expect, incredibly tense.

A cleverly designed point system ensures you play things by the book. Every action you take earns or loses you points, and a tally at the end determines whether you unlock the next level or not. Handcuff a suspect and you'll earn points; shoot them without determining whether they're a threat and you'll lose points. If you kill a hostage, or do anything that results in their death, it's an instant game over. One mistake can absolutely savage your score, meaning you always feel on the brink of failure. 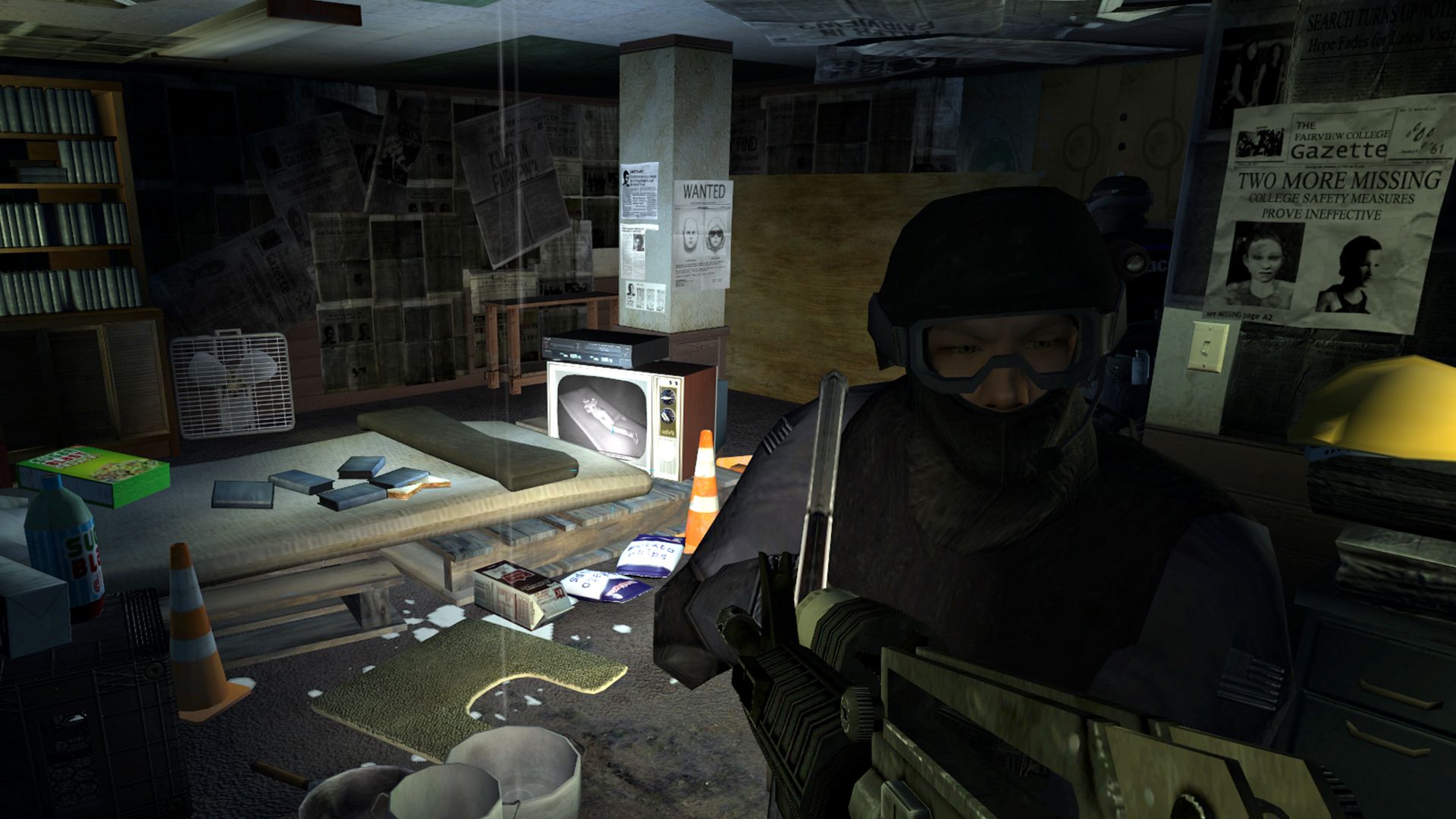 There are no mid-level saves either, adding to the tension. You can't even memorise where the hostages and enemies are placed, because they're randomised every time. Luckily you have a large selection of weapons, gadgets, and tools to help you. To get into a locked room you can quietly pick the lock, or just blow it off its hinges and surprise the enemy. Before you do, slide a camera under the door to see what threats lie ahead. If there are a lot of suspects, tear gas grenades are your friend.

SWAT 4's level design is exceptional. Every location, whether it's a gas station or a corporate office, is ripe with tactical possibility. There are countless ways to approach each mission, giving it the feel of an immersive sim, but with small, focused maps. Breach a room and you have to announce your presence. Some suspects will drop their weapon and wait patiently for you to arrest them. Others will flee or fight. In all the chaos, it can be tricky to pick out who's complying and who isn't.

Controlling your environment is important too. You can use door wedges to contain suspects, blocking off escape routes or funnelling them into an ambush. Early missions are lower stakes, like a gas station robbery gone wrong or a hostage situation in a Chinese restaurant. But the danger escalates as you progress through the story, and later on you find yourself going up against seasoned criminals packing assault rifles and bulletproof vests. These guys won't be as keen to drop their weapons. 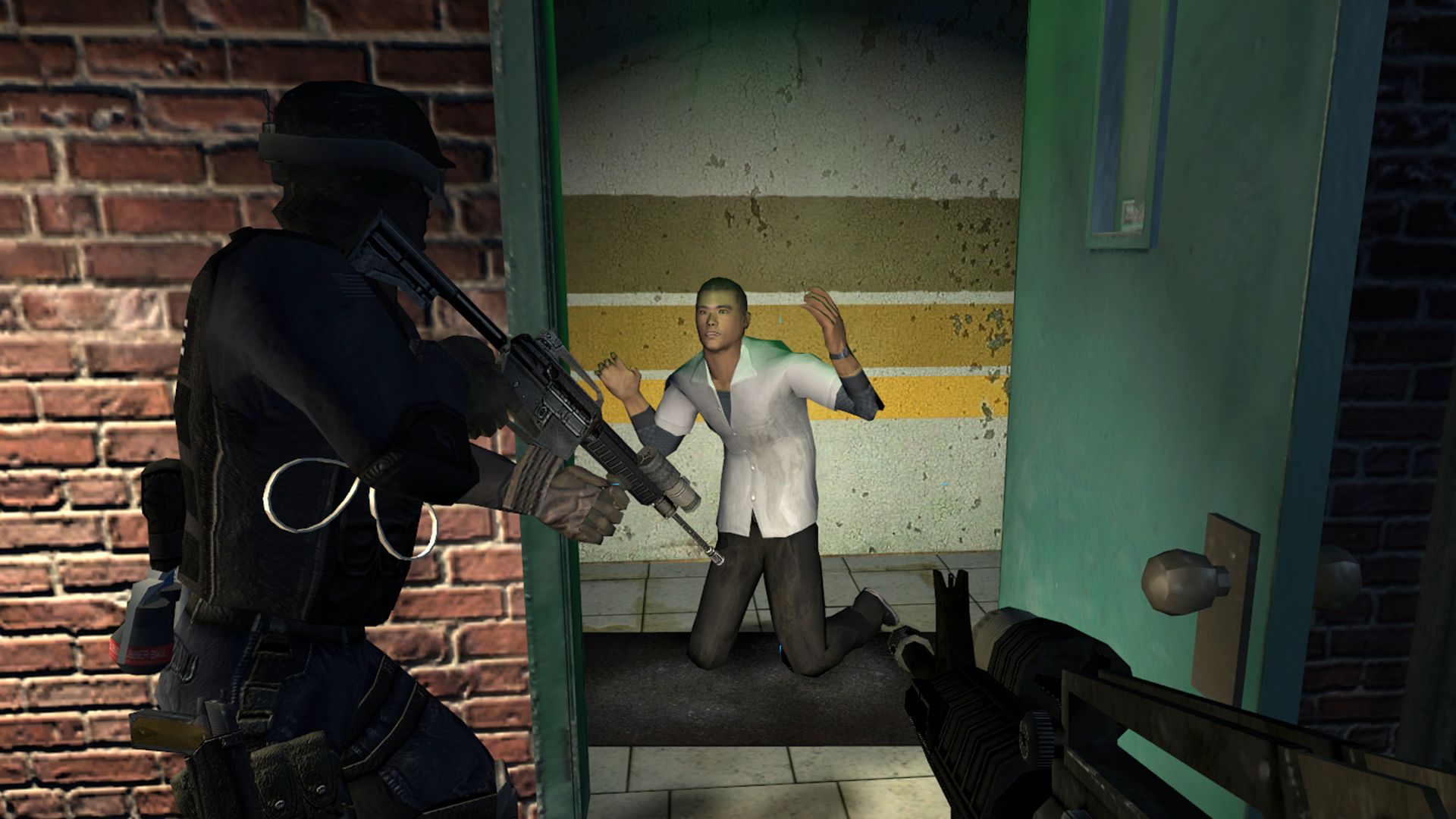 The systemic nature of SWAT 4's combat has slight echoes of BioShock's simulated world, gadgets, and plasmid combos. But it's in the environment design where its DNA can really be felt—particularly in the Fairfax residence. A shotgun-toting serial killer is keeping a girl hostage in a drab little suburban home, and you have to break in, arrest him, and rescue her. Inside the house, SWAT 4 suddenly becomes a horror game, with ominous music playing as you creep along its dark hallways.

Descend into the basement and the mundane suburban decor gives way to a basement straight out of David Fincher's Seven. You see bizarre messages scrawled on the walls, newspaper clippings about the suspect's killing spree, and eerie masks hanging from the ceiling. Being stuck down here, knowing the killer could be in the next room with a shotgun pointed at the hostage, is incredibly nerve-racking. You also have to contend with his mother, who will noisily alert her son if she spots you.

It's an incredible level and it's worth playing SWAT 4 just to experience it. This game might not have made as much of an impact on pop culture as BioShock, but it's just as good—and better in some respects. BioShock isn't very complex, but SWAT 4's scoring system, enemy randomisation, unpredictable AI, and wealth of interesting gadgets makes it incredibly deep and endlessly replayable. It's unlikely we'll ever see a game quite like this again, especially from a developer like Irrational.