Elden Ring has enough items to fill a book. Most players will focus on the menagerie of powerful weapons and spells. Others will look to perfect their character’s fashion with unique armor combinations. And some will dive into the expansive crafting system.

However, there is a category of item that is often overlooked, but crucially important: reusable tools.

You can find these useful items all over the Lands Between and can use them over and over again. Despite their often-innocuous nature, they have the potential to be absolutely game-changing. Here are a few of them that you might have missed, and where you can find them. 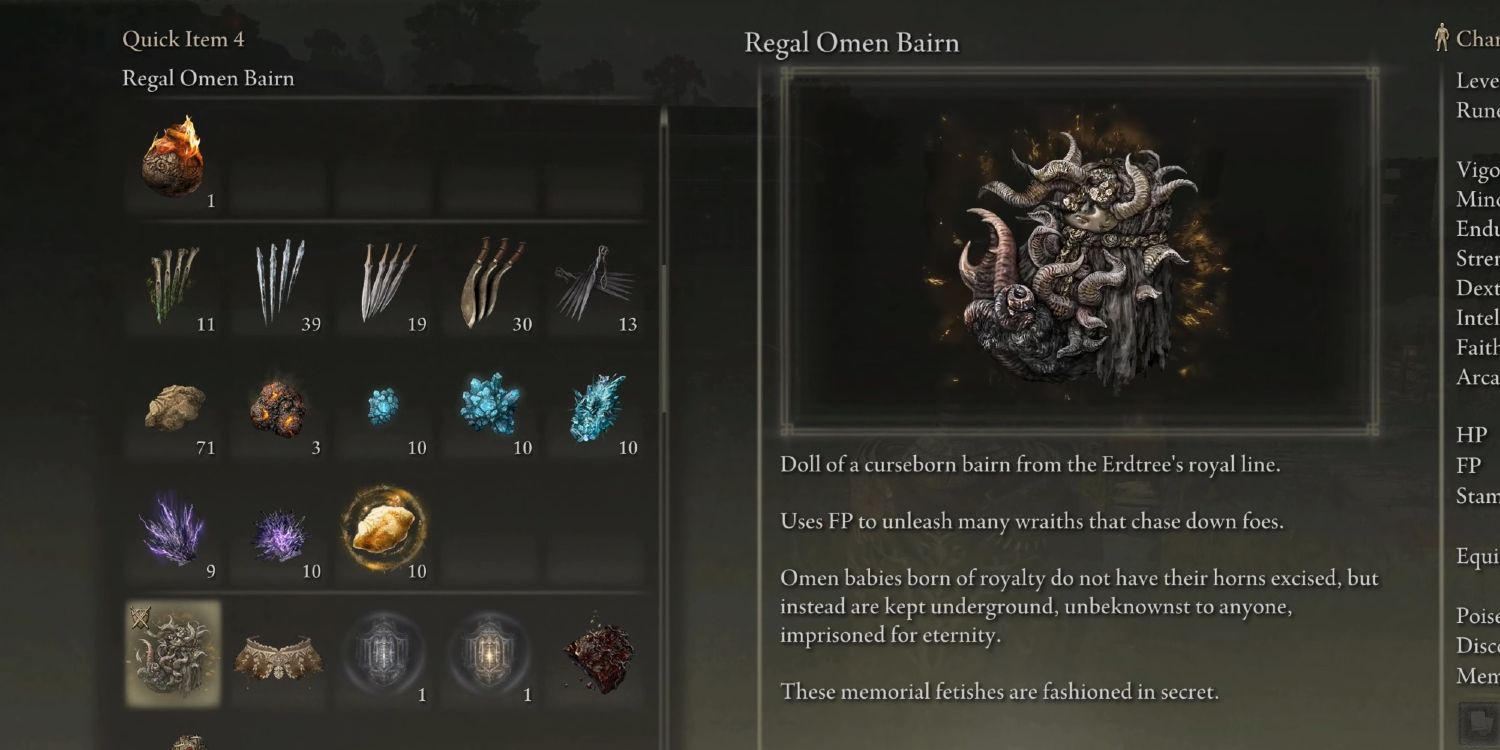 There are a surprising number of damage-dealing tools in Elden Ring. Unfortunately, most of them aren’t especially useful on their own. However, they can be surprisingly effective in the right circumstances. Of particular note is the Regal Omen Bairn, which summons ghostly homing projectiles.

It can’t be upgraded, but it does scale with intelligence and faith. On top of that, its damage is buffed by five percent for each piece of the Omen Set (the Dung Eater’s armor) that you’re wearing. With a little effort, the Regal Omen Bairn turns into a real threat.

To get your hands on this unique tool, you’ll need to kill Morgott the Omen King in Leyndell, Royal Capital, then trade his remembrance to Enia at the Roundtable hold. 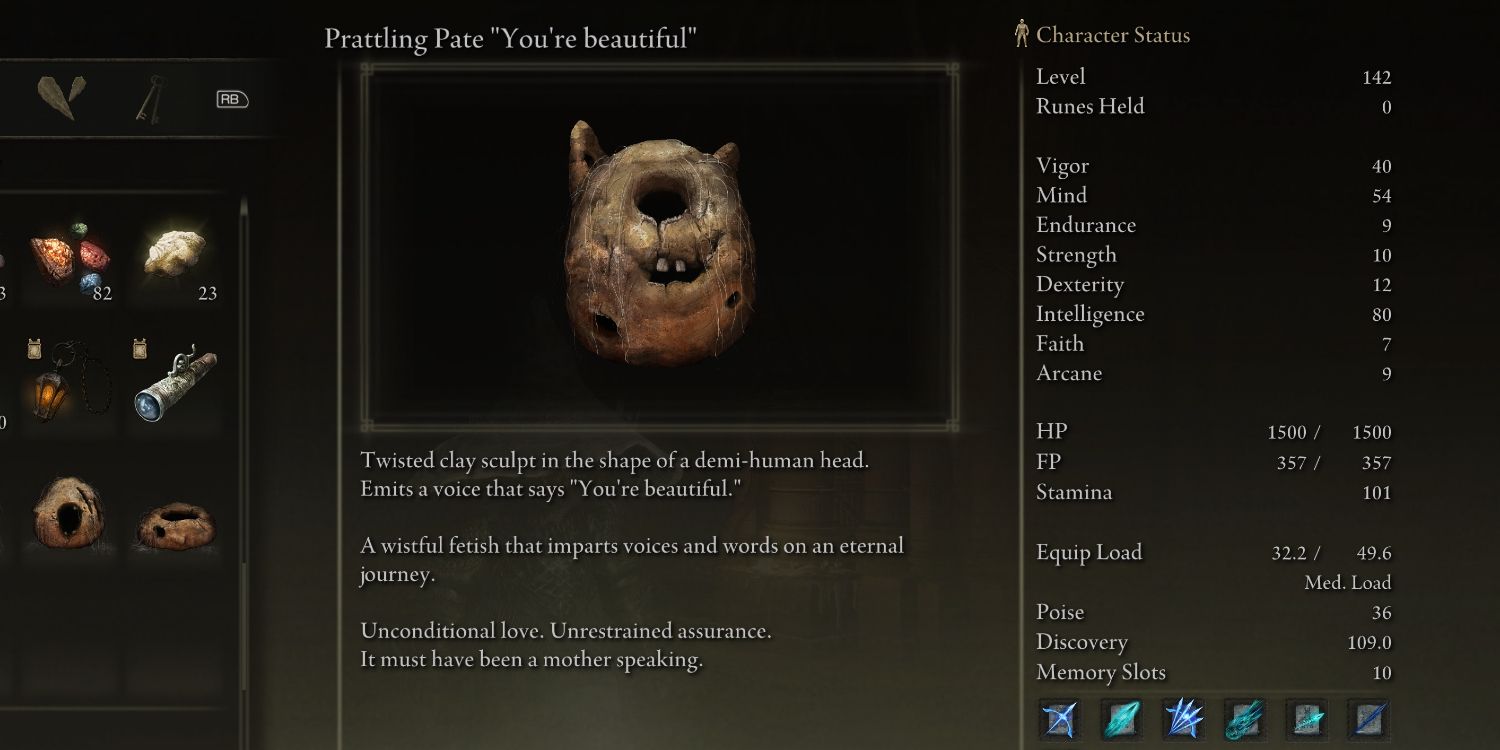 The Prattling Pates are, objectively, great fun. They allow your character to "speak" through a small, clay sculpture, interacting with other players or mocking defeated bosses for your own amusement. Entertaining as that is, one Prattling Pate in particular has another use, one you might not have caught.

Those who have yet to experience it should try using the “You’re Beautiful” Prattling Pate while standing near Boc the Seamster. Talking to him afterwards will result in a heartwarming interaction, and potentially net you a different ending to Boc's questline.

You’ll have to go on quite the trek to find the tool, though. It’s located in the Hermit Village, near the end of a mountainous ring around Volcano Manor. 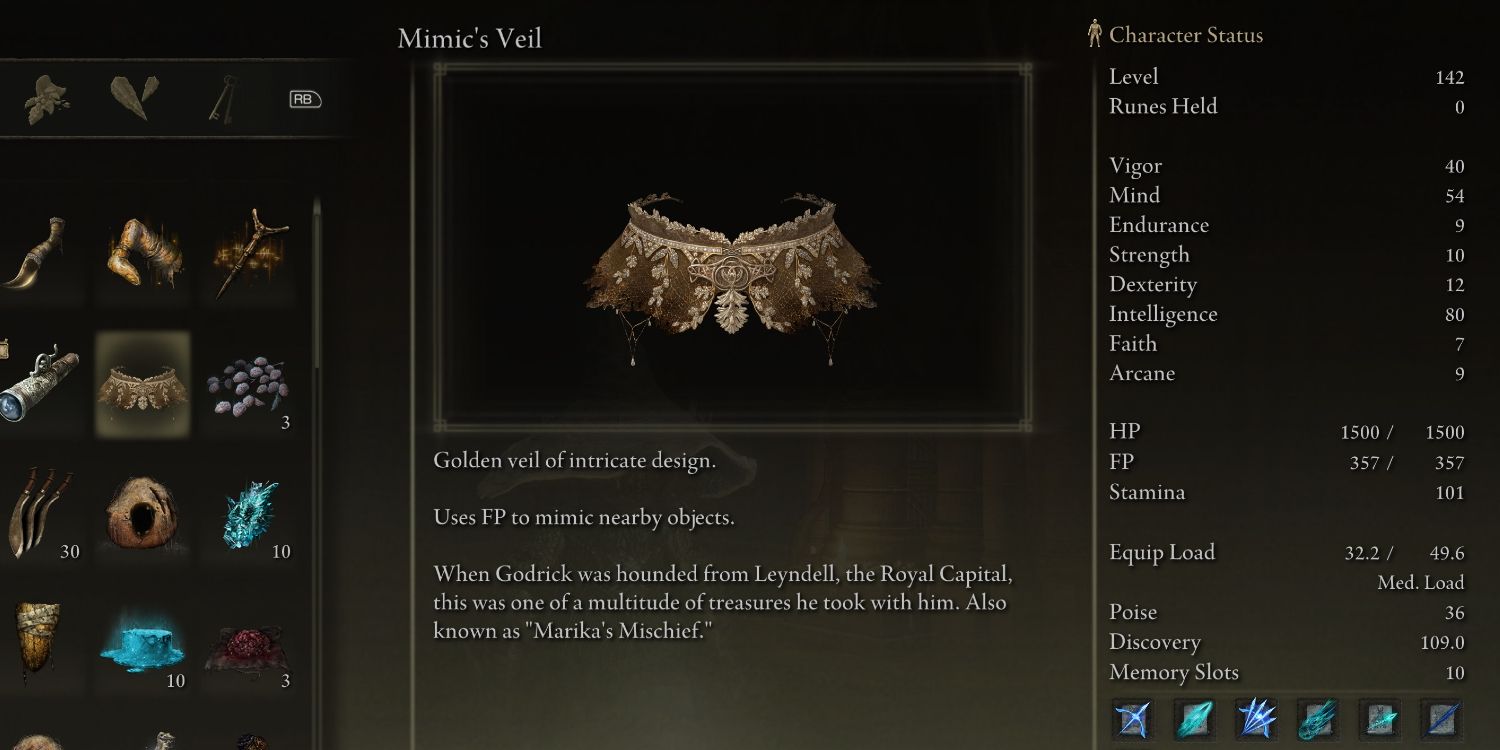 In a game that’s all about intense, fast-paced combat, the Mimic’s Veil offers an alternative approach to gameplay. Using it disguises you as a harmless object, like a statue or dead rat, instead of the deadly Tarnished you really are. Your camouflage can help you sneak past enemies, who won’t notice your disguised form if you aren’t moving.

Where the Mimic's Veil really shines, though, is in PVP. If you enjoy Elden Ring’s invasions and have a penchant for mischief, the Mimic’s Veil is the perfect item for you. Just use the tool and wait for your unsuspecting prey. A more observant opponent, or one who has seen such tricks before, might catch on to your games, forcing you into a fair fight. Fortunately, those failures are more than made up for by how satisfying it is to watch someone panic roll away as you materialize out of nowhere for a devastating blow.

If any of that sounds like fun to you, head to Stormveil Castle and look in the rooms above the Grafted Scion, where you will find the Mimic's Veil in a chest. 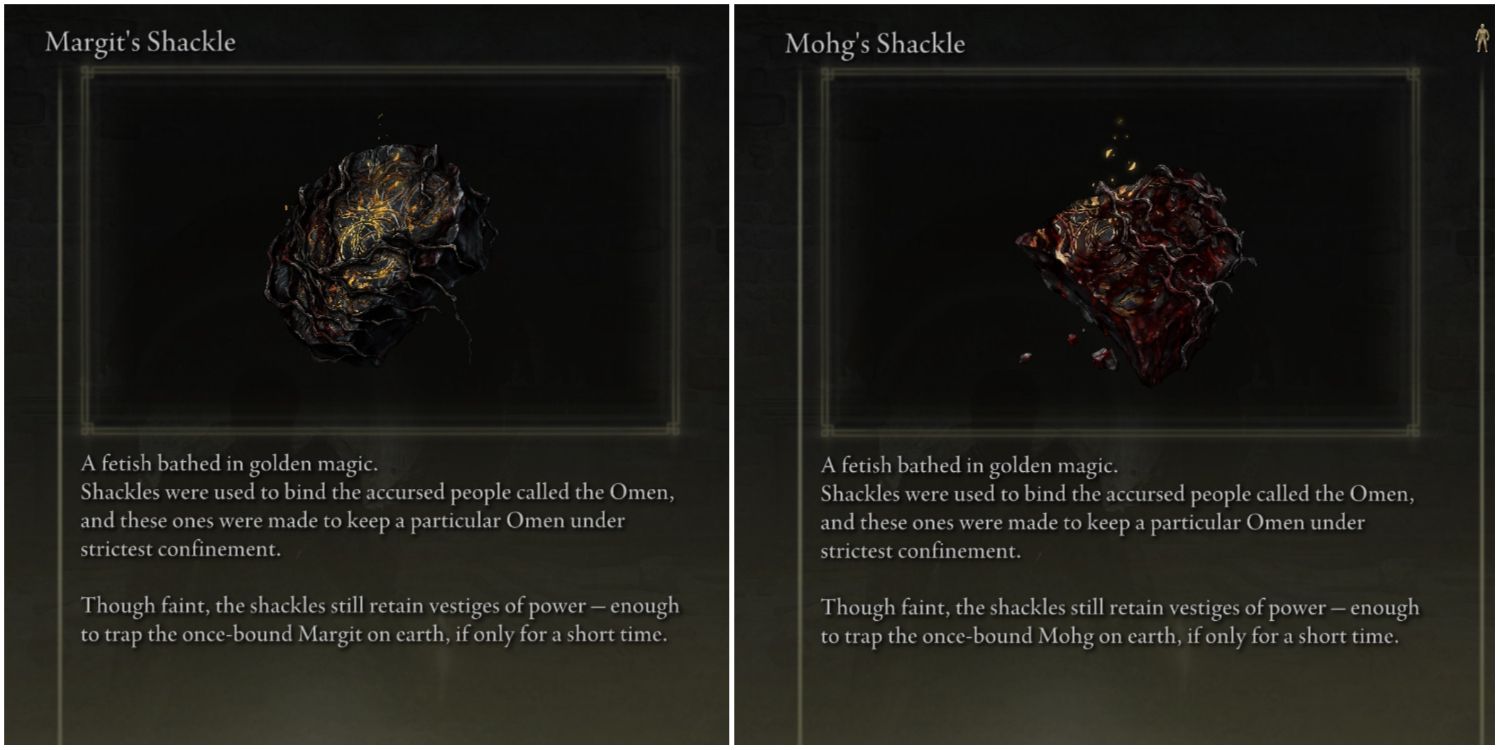 Looking at their intended purpose, Margit and Mogh’s Shackles are clearly already exceptionally useful, allowing you to stun their respective bosses in all five of their appearances. That alone is quite the handy trick, but the Shackles have some hidden uses as well.

Activating them outside those encounters will reveal nearby illusory walls and disable the flame-spitting pillars that would otherwise need to be hit with a weapon or projectile.

If you don’t care about the boss fights and only want the other benefits, Margit’s Shackle is by far the easier of the two to obtain. You buy it from Patches, who you can first meet in Murkwater Cave in central Limgrave. Finding Mohg’s Shackle will take more work, as you’ll need to delve into the Subterranean Shunning-Grounds beneath Leyndell, Royal Capital. 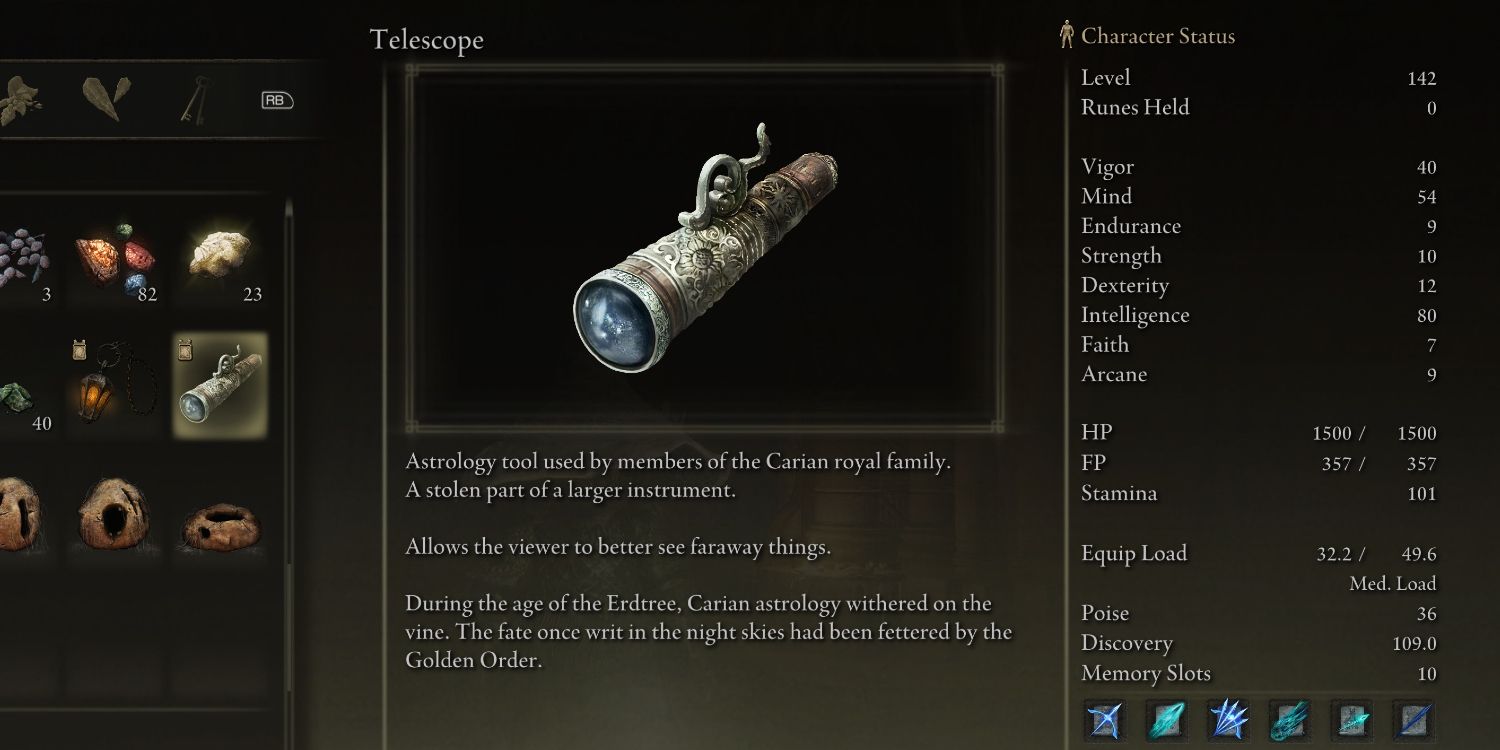 In the Dark Souls games, the binoculars were a fairly niche item. But the world of Elden ring is much, much larger than any of its predecessors. As such, its binocular analogue, the telescope, is far more useful. Resourceful players can use it to scout the area ahead of them for enemies and secret paths that a less-observant might miss. It takes a bit of creative thinking, but the telescope is invaluable in the right hands.

If you want it in your hands, you can find it extremely early in the game. Merchant Kalé, one of the first NPCs you'll meet, sells it in the Church of Elleh, in Limgrave. 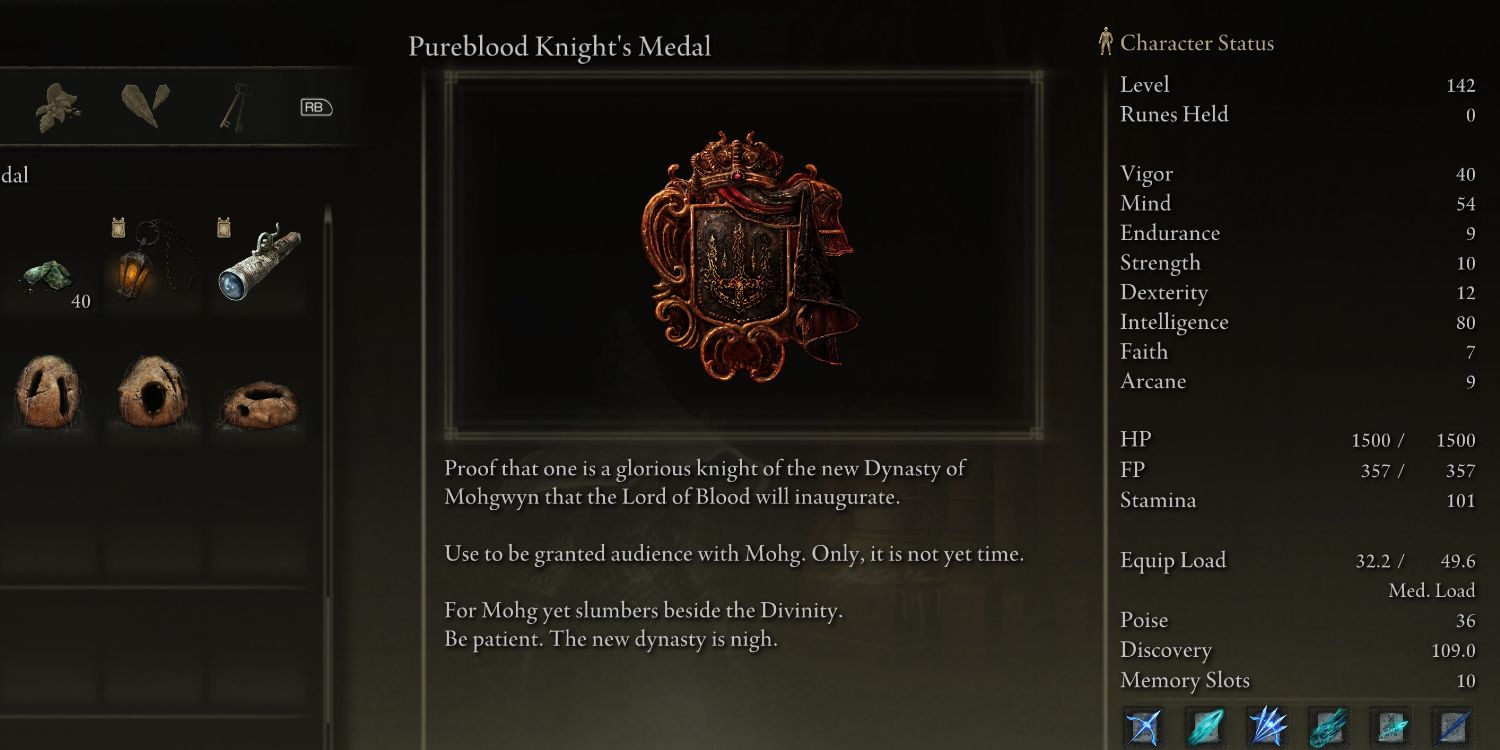 On the surface, the Pureblood Knight’s Medal seems like a one-use item. You acquire it near the end of White Mask Varré’s questline, and it will teleport you to Mohgwyn Palace much earlier than you would otherwise be able to access the area. However, the Medal has another (perhaps unintended) use.

Consider the Memory of Grace, an item every player starts the game with. It allows you to teleport back to the most recent Site of Grace you rested at for the cost of all your runes. In a roundabout way, the Medal does the same thing, teleporting you to the Palace, from where you can freely fast travel away. Sure, it takes an extra loading screen. But unlike the Memory, you can use the Medal when fighting a boss, and you don’t lose any runes when you do it. If you can wait those added few seconds, it's absolutely a worthwhile trade. 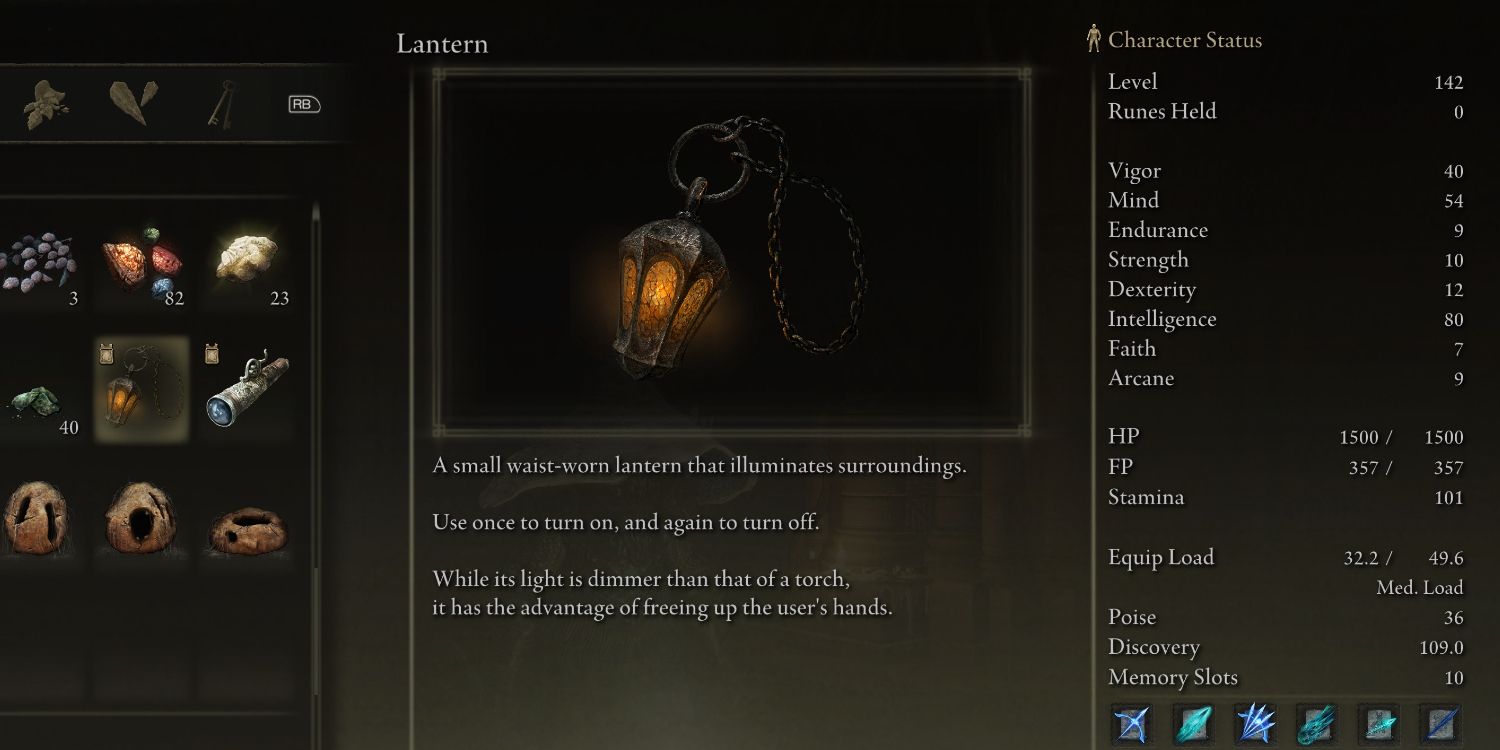 The Lands Between are dark. That's a true statement thematically, but also literally as there’s only so much you can accomplish if you can’t see. Using a torch feels like the obvious solution. Unfortunately, that takes up one of your hands and uses crucial equip load percentage. That's where the humble lantern comes to the rescue. It doesn’t provide quite as much light as a torch, but it weighs nothing and attaches to your waist, leaving your hands free. It’s a must-have item for any Tarnished, especially those with a fondness for exploring.

You can access the lantern soon after leaving Limgrave, though you might have passed it over without realizing its value. You can buy it either from the Nomadic Merchant in Liurnia of the Lakes or the Isolated Merchant in the Weeping Peninsula. 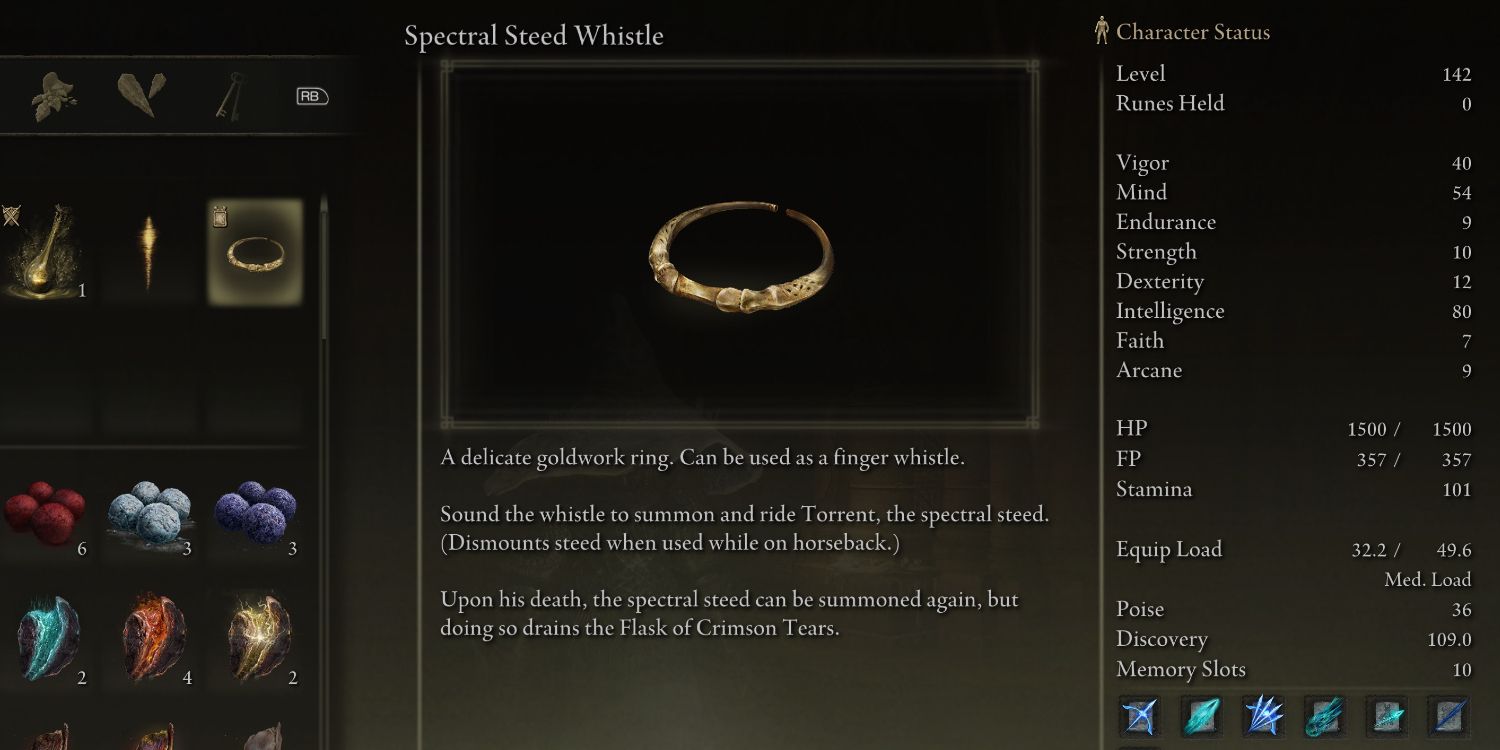 Unsurprisingly, the only item on this list that is virtually unmissable also happens to be the best. The Spectral Steed Whistle is probably the most-used item in the game, only rivaled by your flasks. It allows you to summon Torrent, your galloping, double-jumping mount. Beating the game without him is possible, though rarely attempted. There are also a number of tricks you can do with Torrent, and his whistle specifically. For instance, mounting and dismounting grants you limited invincibility, though how useful that is during normal play is debatable.

Either way, the journey through the Lands Between would be much less fun (and much slower) if you couldn’t summon your faithful companion.