Although The Forgotten City lets you tackle some of its objectives in a non-linear order, one of the first tasks you’re likely to come up against is getting the Silphium Resin to prevent Iulia from dying.

Getting the Silphium Resin is also likely to be one of the first times you’ll see The Golden Rule and The Forgotten City’s time loops in action, so it's an important quest for more than just one reason.

How To Get The Silphium Resin In The Forgotten City 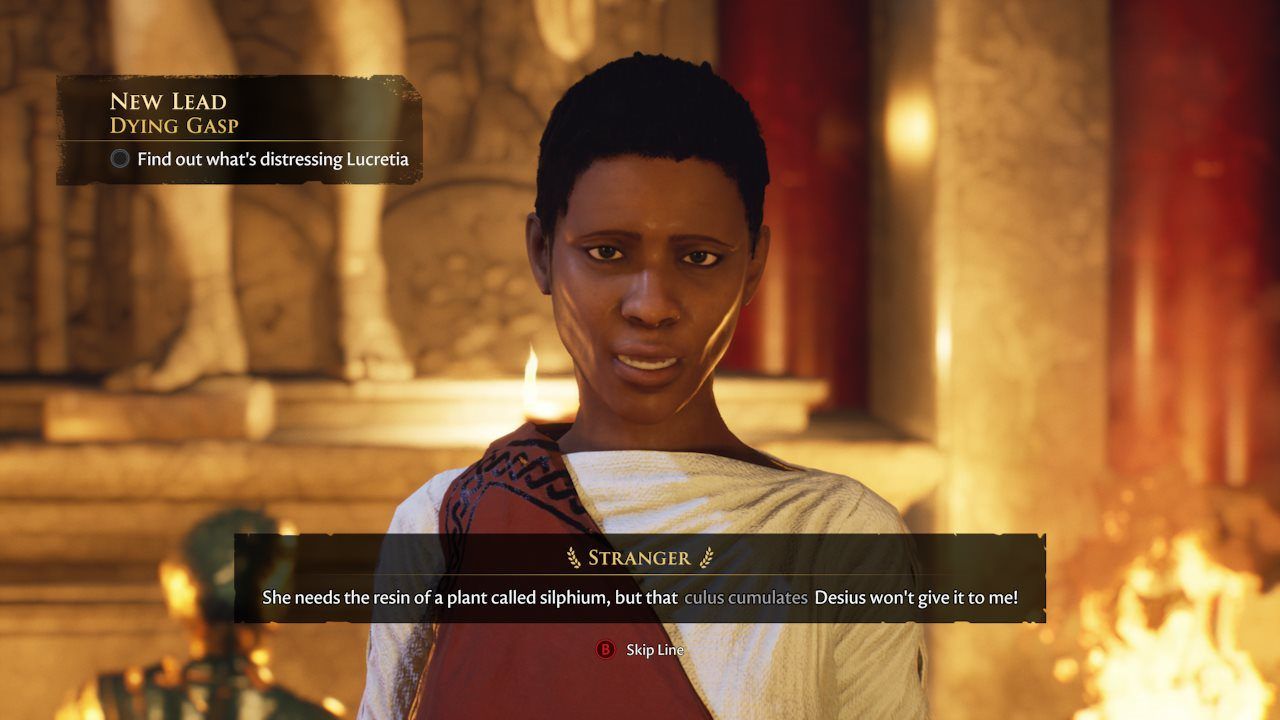 Getting the Silphium Resin is part of the “Dying Gasp” questline. To start this, you’ll need to head towards the marketplace, which is across from Sentius' palace and up the stairs. When you get there, head into the first building on your left, the Shrine of Apollo. Here you’ll find Lucretia trying to cure Iulia from being poisoned, but you’ll be too late to help out.

Lucretia will mention that Desius has the cure for the poison, Silphium Resin, up for sale for 1,000 denarii, which is far too much for her to afford. You’re then tasked with getting the item off Desius to save Iulia's life in another loop.

Desius can be found in the marketplace and will have his own stall where you can see the Silphium Resin in a yellow jar. Talking to him will reveal that you can’t really get the Silphium Resin off of him without triggering The Golden Rule. Stealing it will surely count as a sin, no matter how unethical Desius is being by jacking up the price so much.

Despite this, the easiest way to get the Silphium Resin is to steal it from Desius. To do so, you just need to interact with the Resin twice. Doing so will trigger The Golden Rule and cause statues to start shooting golden arrows at everyone. More importantly, you’ll also get the chance to run through Sentius’ portal and reset time completely, likely for the first time. 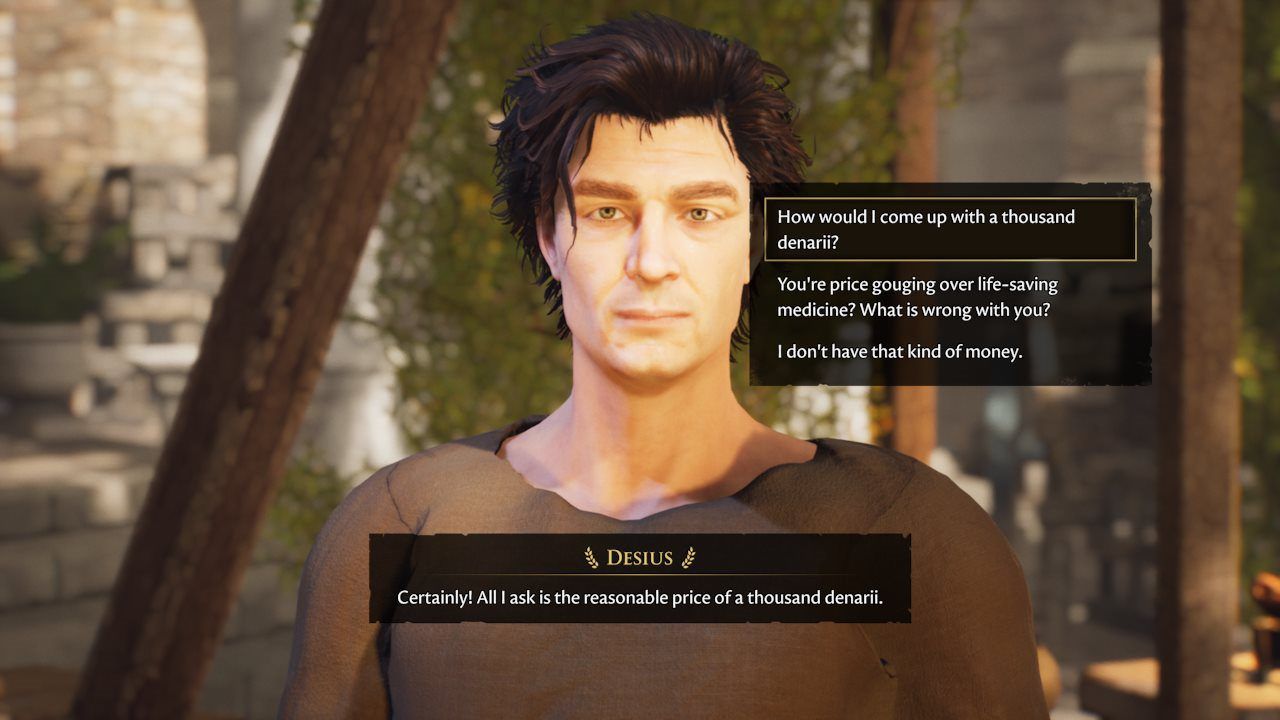 This is where The Forgotten City’s time loop comes into effect. The player will be able to keep any items that they have between loops, meaning that stealing it once will have it permanently in your inventory and Desius will be none the wiser when you come back around the second time. Once you've got it for the first time, you'll never have to worry about stealing, or buying, it again.

If stealing straight from Desius is simply too unethical for you, you can choose to buy the resin from him honestly, although getting that much denarii together is going to be a challenge. The most reliable way is to steal it from a chest in Malleolus’ villa after Ulpius jumps from the cliff, but that will once again invoke The Golden Rule, so to cut to the chase it’s easier to just steal it from Desius and reset time that way. 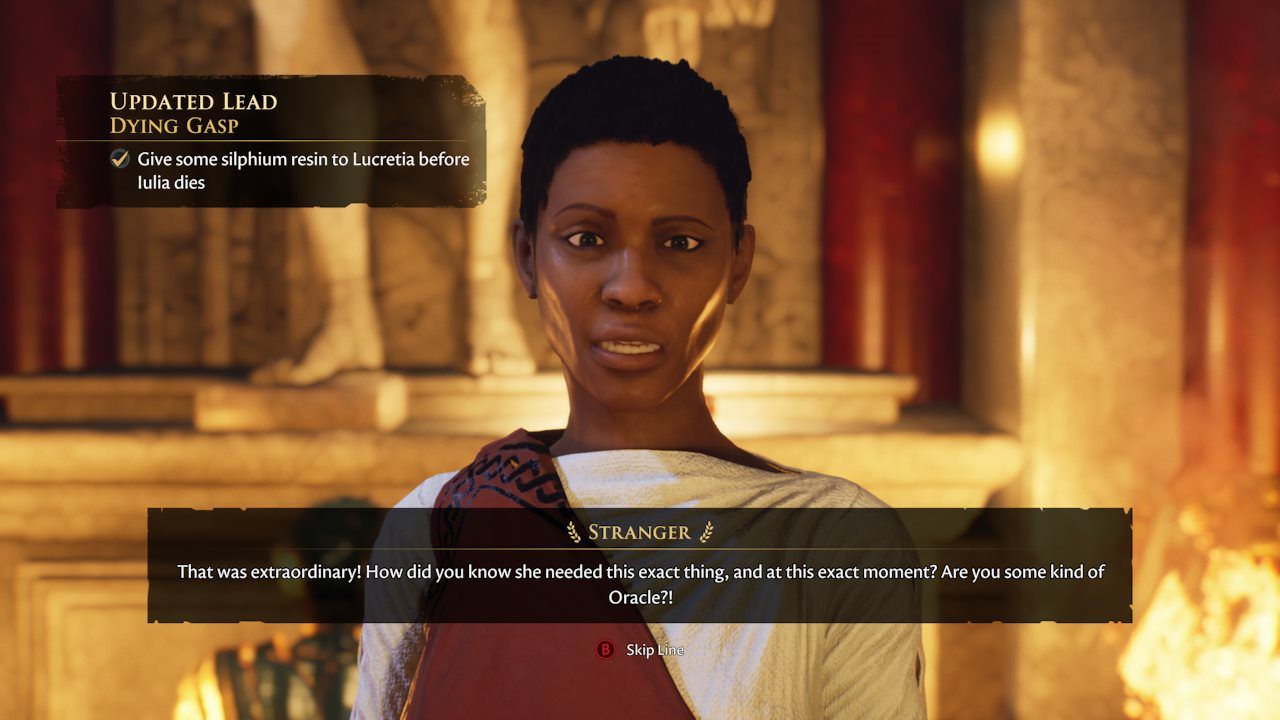 After getting the Silphium Resin and resetting into the next time loop, you can tell Galerius to run down and give the Silphium Resin to Lucretia and save Iulia’s life. You can then talk to her about Sentilla’s whereabouts and the rumours that she'd found “a way out”, although you likely won’t get the answer you’re looking for. With that, you'll have completed the Dying Gasp quest and learned a little bit about how The Forgotten City's time loop works.