Throughout a playthrough of The Quarry, you'll be able to find Tarot Cards which can be turned in to the narrator Eliza between chapters. This allows you to glimpse possible outcomes, potentially guiding the game's characters to a better shot at survival or an untimely demise. Regardless of how many cards you find in a chapter, though, you can only choose one to predict the future.

Tarot Cards appear with a sudden change in camera angle, making it easy to know when you're near one. However, some will burn away if not picked up quickly enough, so be sure to take every opportunity to collect Tarot Cards when they appear.

We've tried to keep spoilers out of this guide as much as possible, but you may still be able to figure out plot points based on the information herein. We recommend completing a playthrough on your own first before using this guide to get any Tarot Cards you missed. 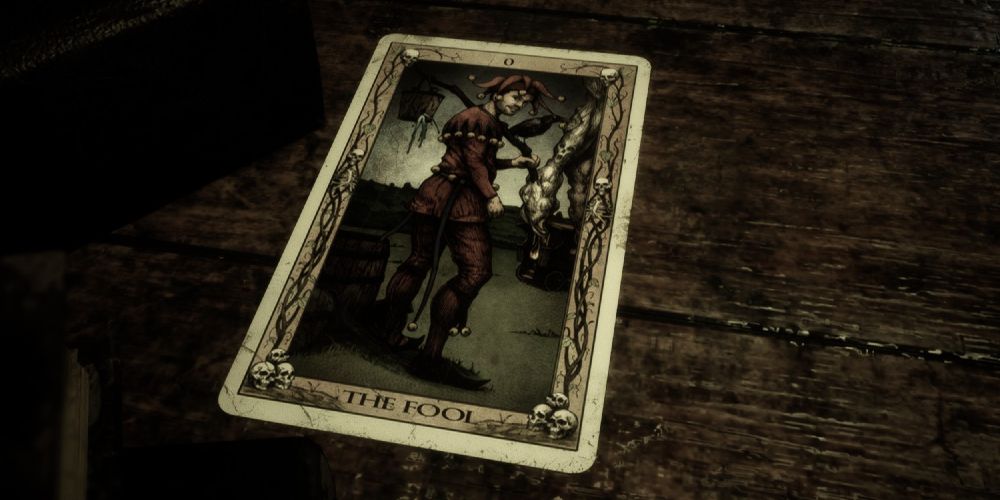 When Laura goes off into the woods, the camera will suddenly shift after only a few steps. The Fool is visible during this time and can be collected. 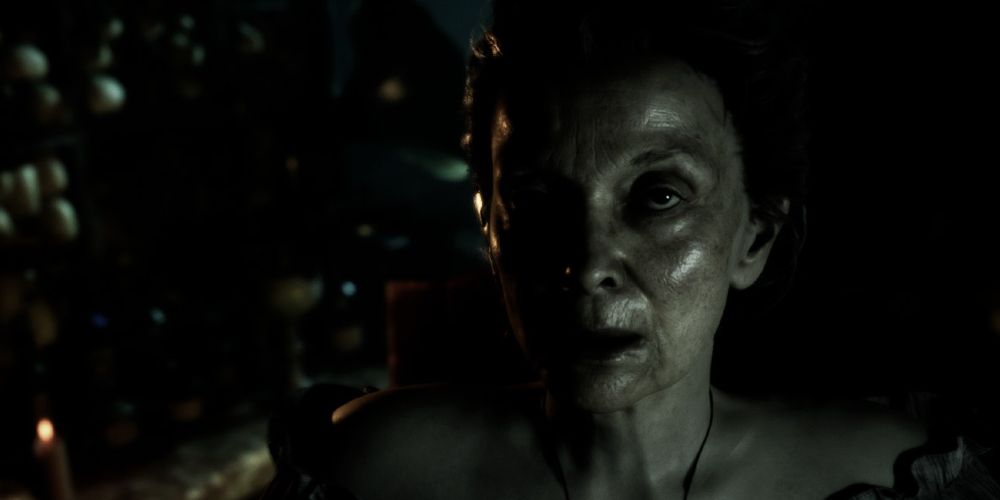 There is a single Tarot Card in Chapter 1, but it's easy to miss. Be sure to collect it immediately upon entering the Lodge as Jacob so that you don't miss your chance!

After Jacob climbs through the window to enter the Lodge, leave the library to reach the main room. Take an immediate right, and you'll see the door to the kitchen (there's a big metal fridge visible inside). The Temperance card will become visible when Jacob crosses the threshold into the kitchen. 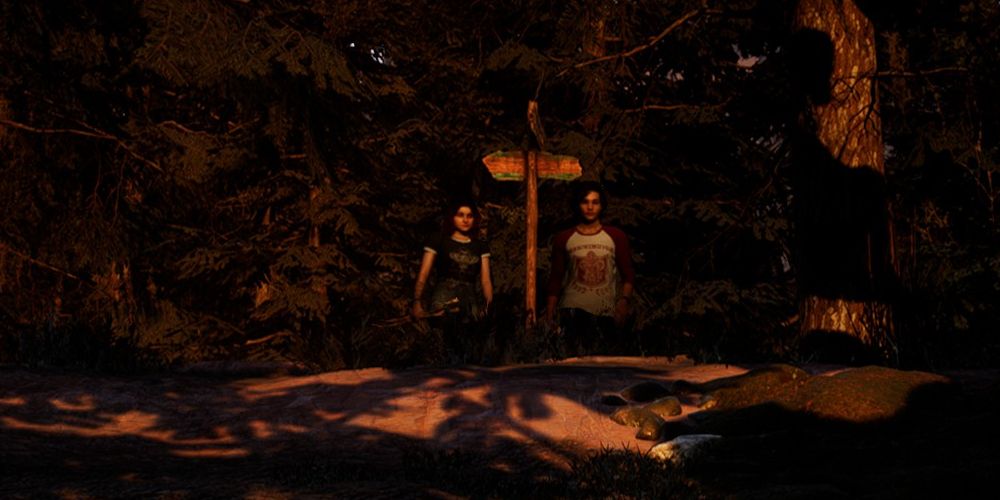 Like the previous chapter, Chapter 2 has only one Tarot Card, and it's possible to skip the area where it's found entirely. The game forces you to choose between finding The Hanged Man or some Clues, so you'll need to play through the game multiple times to see everything.

When Nick and Abigail go for a walk to collect firewood, choose to take the Rocky Road trail back to the others. The Hanged Man is found by taking a left at the fork in the road. 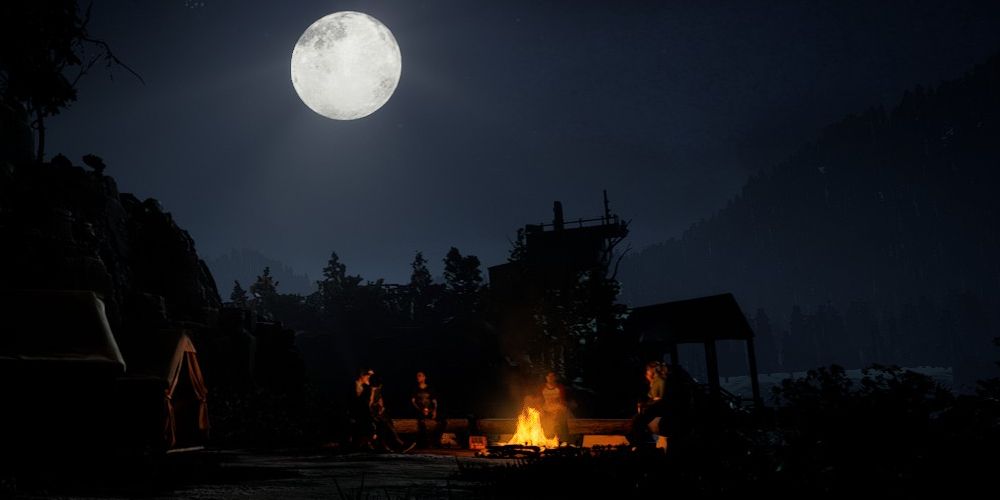 There are two Tarot Cards to find in Chapter 3, one as Abigail and one as Jacob.

After Abigail leaves the firepit and goes into the woods, The Tower will appear in a tree as you proceed along the path. You'll have an easier time triggering the camera angle change if you stay on the right side of the trail.

When Jacob enters the boathouse in search of towels, The Star will appear after taking a single step inside. 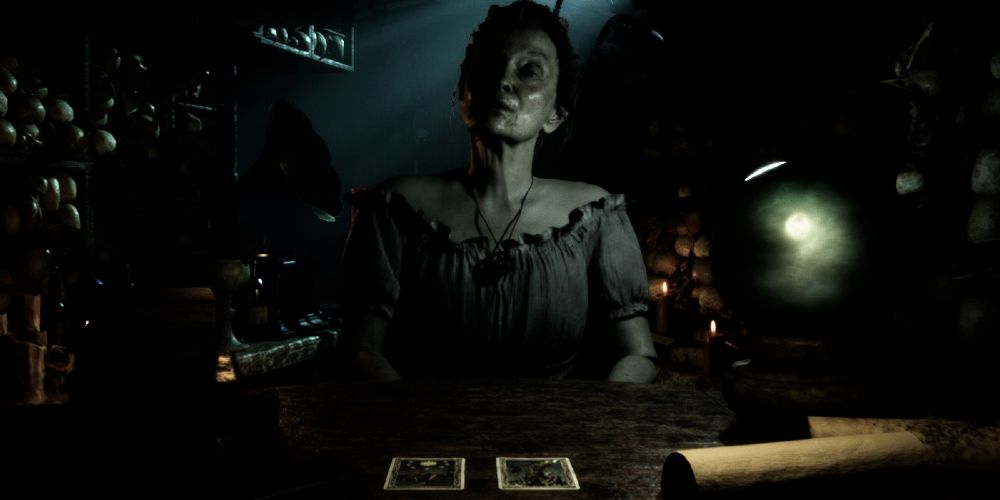 Chapter 4 contains two Tarot Cards, each at the beginning of a character's scene. Be sure to collect them both before setting off as both Emma and Dylan.

As soon as you're able to walk around as Emma, immediately turn around and walk to the end of the pier. There will be a brief cutscene as you approach, after which you can go to the very edge and collect the Tarot Card.

After Emma's encounter on the island, gameplay resumes as Dylan. Strength becomes visible immediately when you can start walking, so be ready to snatch it right away. 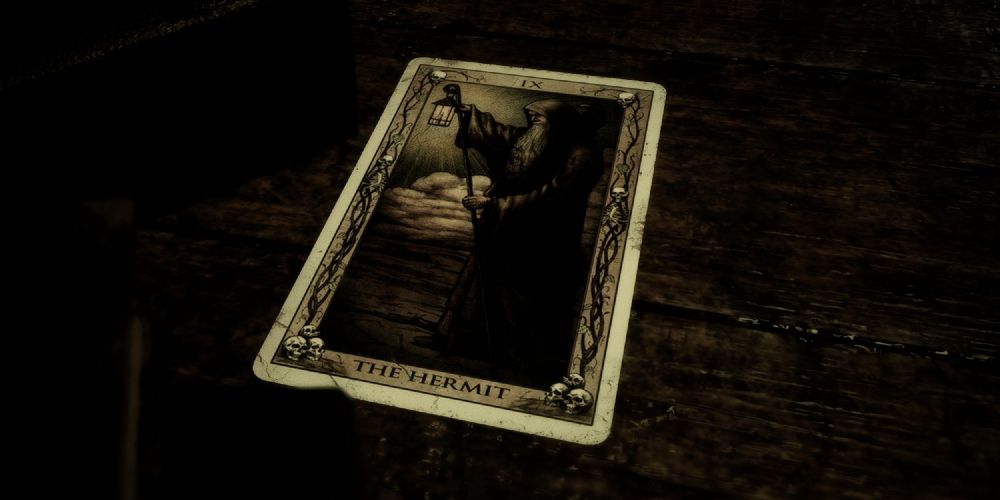 Dylan and Ryan can find two Tarot Cards when they visit the Camp Cabins on their way to the radio hut. Collect both before entering the building.

The first time you approach the radio hut, you can talk to Ryan. He will ask if you're ready to enter. If you still haven't found all the Clues and Tarot Cards be sure to say no. Talking to Ryan again will immediately end exploration and enter the next scene, so be sure not to speak with him a second time until you're absolutely ready.

Look for a swing hanging from the big tree in the center of the cabin circle. The Devil is between the swing and the nearby table. 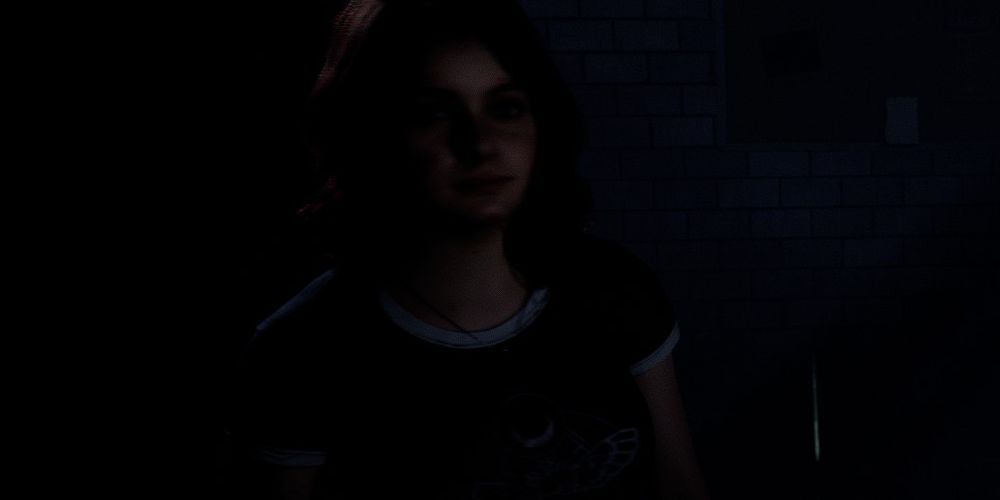 Jacob and Abigail each have an opportunity to find Tarot Cards during Chapter 6.

After going down the stairs to get off of the boardwalk, Jacob can find Justice on his left. It's not far from the stairs, so don't venture ahead until you've found it.

While exploring the pool house as Abigail, check the showers. The Moon is in the third shower stall. Collect it before moving the space heater to comfort Nick. 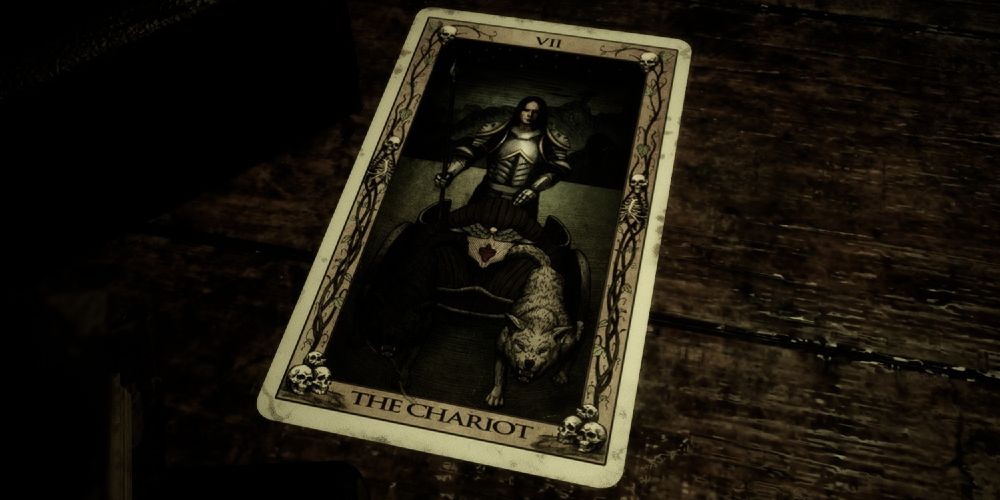 Laura can find two Tarot Cards during her brief exploration of the police station. Try to find both of them before returning to your cell to wait for Travis.

Walk to the center of the large office area outside the cell block. Between the desks the camera will shift to the ceiling, where The Chariot can be collected.

Look for bunk beds up against the wall near the cell block. The World is underneath them. 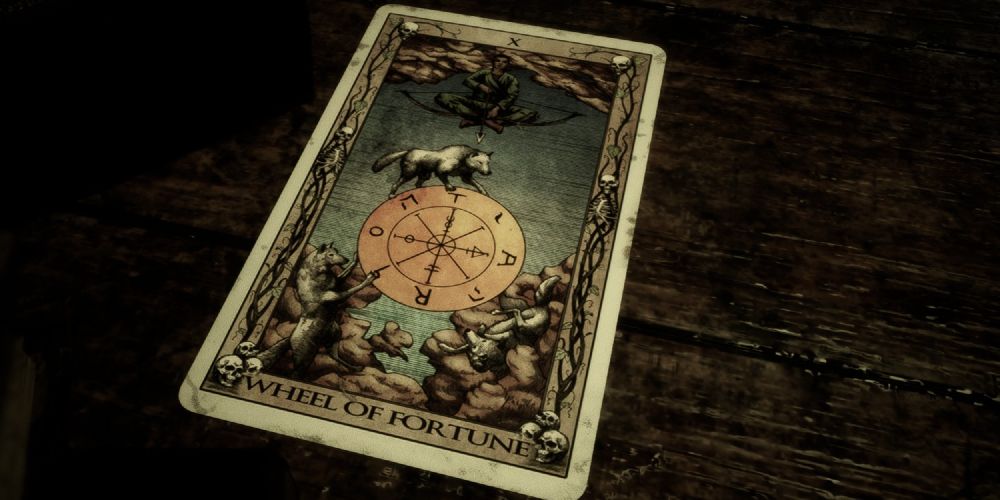 Chapter 8 has four Tarot Cards to find, and is tied with Chapter 9 for having more than any other chapter.

After Ryan and Laura fall into the abandoned quarry, follow the main path upward. After a quick-time event where the scaffolding partially collapses, you'll enter the next chamber.

The path juts out immediately to your left here; step onto the extended platform to collect The Lovers.

After removing the boards to clear the way past the cave-in sign, the Wheel Of Fortune will appear on your left as you proceed down the main tunnel.

After emerging from the quarry into the basement of Hackett House, take an immediate left to find a side room containing The Empress.

Once you've retrieved the Empress, return to the main path and walk straight ahead from where you started. The Emperor can be found on the right as you proceed. 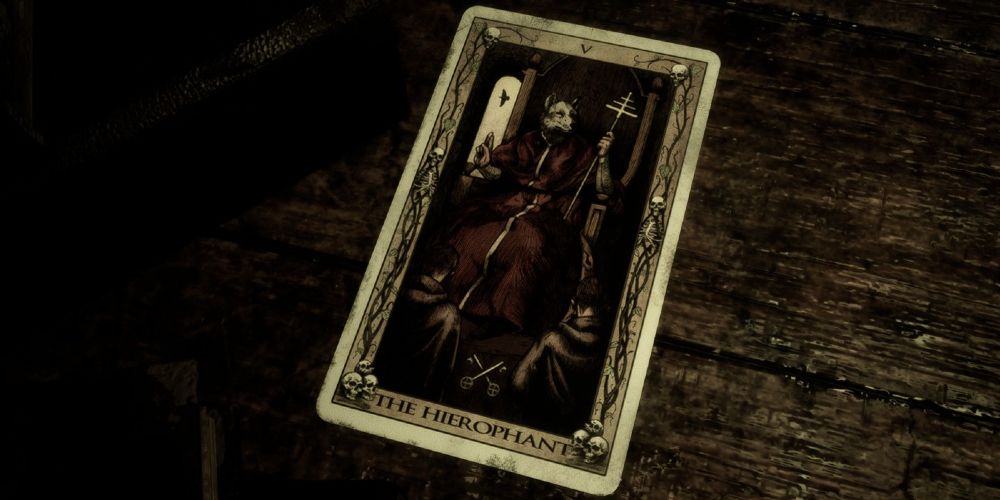 There are four Tarot Cards hidden throughout Chapter 9. It's a very tense chapter, so keep calm and be thorough while searching!

After the encounter with Constance and the rest of the family in Hackett House, Ryan will emerge from hiding alone. Walk to the center of the room to find the Death card. Do this first before checking anything else to avoid accidentally triggering the next scene.

When Laura enters the room with the piano, the main path will take you up the stairs. Take in any Clues you find, and when you're ready proceed along the landing to find a room with large windows.

The Sun will become visible as you enter the room. Grab it before crossing to the other side, as doing so triggers a cutscene automatically.

In the Scrapyard, once you've opened the gate to the main area you'll find several staircases that allow you to climb on top of the shipping containers. Judgment is in the middle of the large group of containers, directly across from the yellow crane.

The crane also happens to be your objective in this scene, so it's a useful landmark. Since it's on top of a large junk pile, you'll need to look up if you want to use it for navigation.

In the storm shelter, return to the stairs that lead to the parking lot. The Hierophant will become visible as you approach the staircase.

If you collect The Hierophant, Eliza will not permit you to use any of the others you found in Chapter 9 to make a prediction, and will instead trigger a special scene. 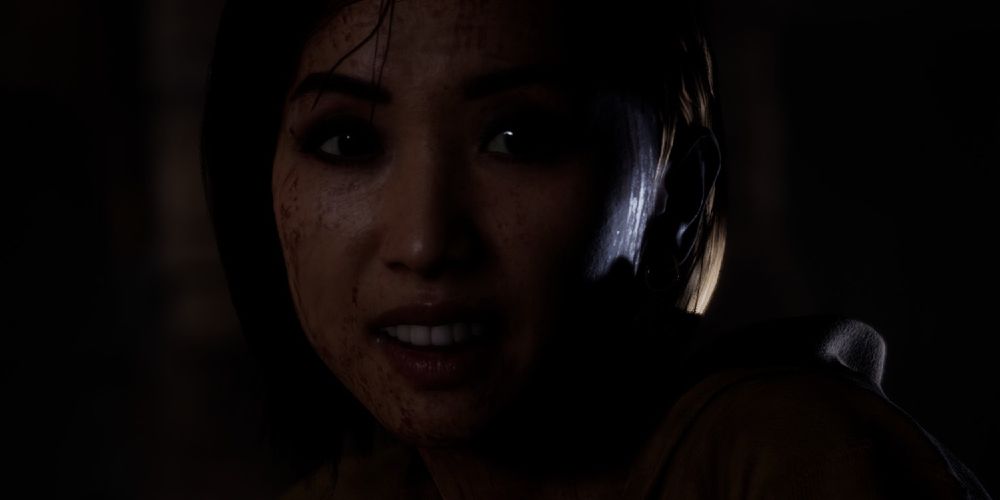 The final Tarot Card can be collected at the beginning of Chapter 10, before the attack on the lodge.

While exploring the lodge, go up the stairs and to the left, over the kitchen. There will be a room with a large carpet and another set of stairs leading to the third floor. Explore this top floor to find The High Priestess.

Be sure to collect The High Priestess before preparing for the final battle at the portrait of Septimus Hackett.