Whenever you get into a new raid in The Unliving, the game always starts you at Burial Isle no matter how far you got in your previous run. You play as The Necromancer who can raise his army from the corpses of enemy humans, and you have to beat all the regions to get specific shards for your rite.

Even if you get past the first area in the game, you'll be coming back to it a lot of times for your further runs. To make the process easier, it's important to memorize the general layout and walkthrough for an area so that you can progress faster whenever you need to.

The Unliving is currently in Early Access, and it can be subjected to various changes with time. 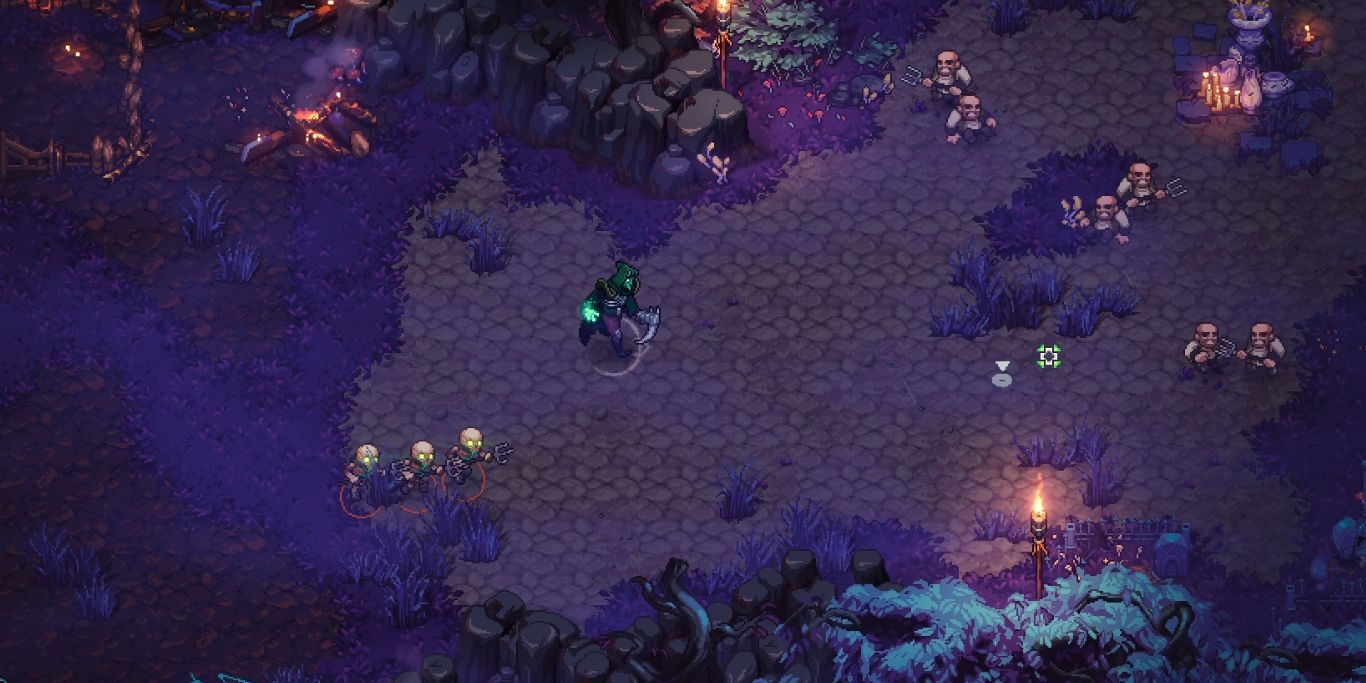 As soon as you spawn on Burial Isle, you will see three gravestones with yellow-white skulls where you can raise three undead peasants. There will also be a random Essence that can be Blood, Echo, Bone, or Lifeforce.

You'll be lucky if you got Bone Essence as the first one at the start of this area. This is because this Essence has a ton of helpful spells and sacrificial runes for the early game.

After raising the undead and making your choice at the Essence, you can move forward to find three to six human peasants blocking your path. This will be the first fight, and also the only one where this enemy type will be annoying.

These peasants will hurl their spears toward you. It's important to dodge these before you start attacking them with your basic attack since your undead will need help in passing this first hurdle. Once you've defeated them, move on to find these enemies:

Before you defeat the enemies behind barricades, try to move forward and get a few more undead in your army so you don't have to lose a lot just to break the obstacles. 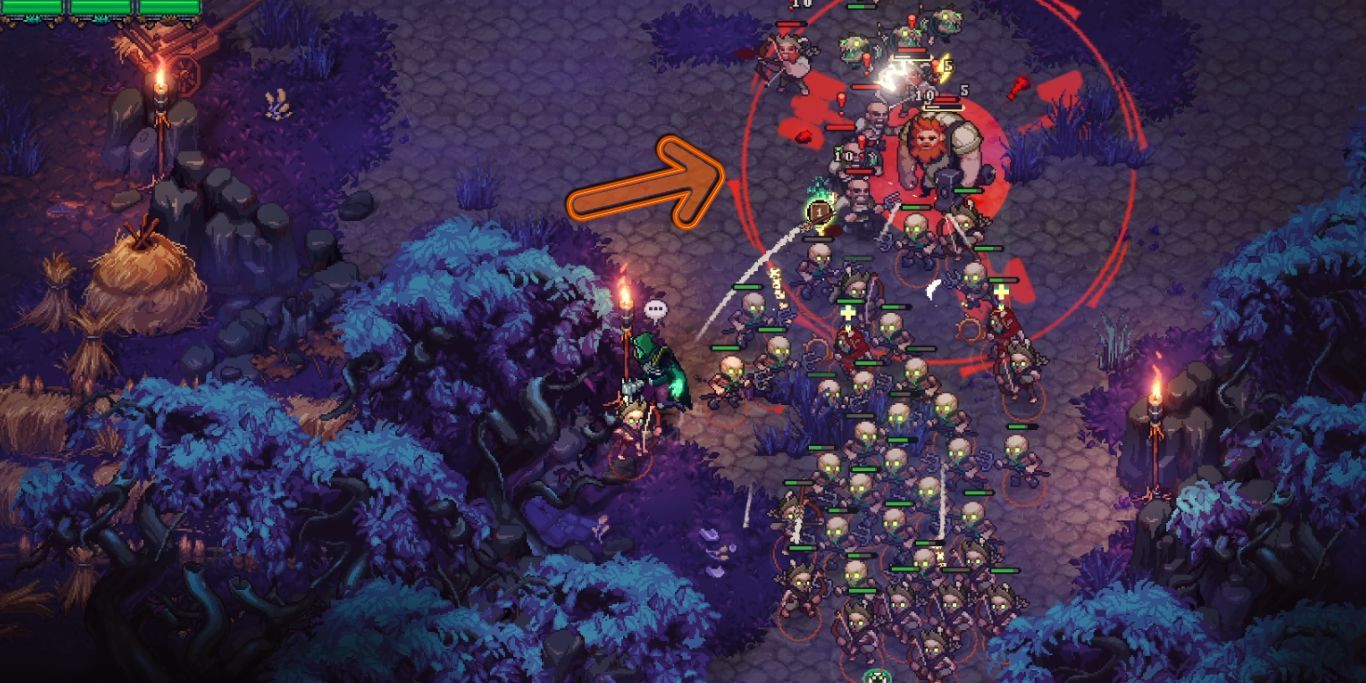 The first barricaded enemies will also lead to the first optional path where you can get an altar. Once you claim this and move forward, you'll be introduced to the first giant in Burial Isle with a bunch of smaller enemies.

Since your army will still be pretty small here, it's best to bait the giant's AoE attack and then command the undead to move away from the horde to avoid it. Giants will become a common site in the future, and you can also try to cancel their attack with the undead archer's sacrificial skill.

From this point, you'll also start running into choke points where there'll be a group of enemies in the open, and another group behind barricades to attack you at the same time. Make sure you prioritize the group that you can kill easily.

This way, you can use the undead from the weaker group to help you defeat the harder group. Certain abilities like a static chimera or a totem that can attract enemy attention also help you with these.

Continue on the path and make sure you beat every single optional route to get gold coins, Arkhe, Prima, and Essence. After getting three or four of these altars, you'll be fighting your first werewolf. You'll most likely have to beat only one werewolf before you get the first Wares. 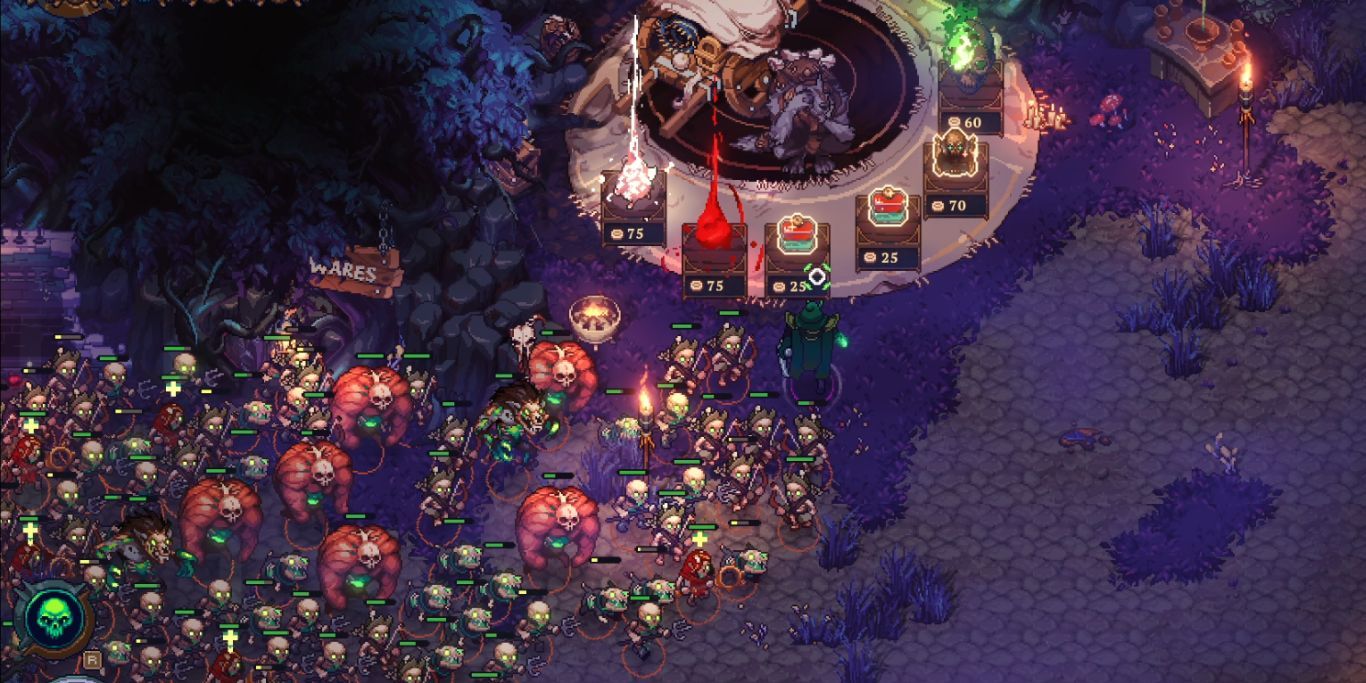 You'll need to spend gold coins if you want to buy anything in the Wares, and here's how you can get them:

If you have enough coins, you can buy two Lifesparks, one extra Lifespark spot on your HP bar, Arkhe, and two random Essence at the Wares. Once you're done shopping, move forward to find a bunch of random groups and choke points.

During your endeavor, you might come across a room with a pot in the middle and a bunch of hatches around it. If you choose to interact with it, the room will be locked and you'll have to fight a ton of enemies to win.

Unless you have over 100 undead and the best spells and sacrificial runes, this room is usually a bad idea. It's the only room that's recommended to skip during a raid.

After going through enough battles that are randomly generated, you'll stumble upon the second Wares room, and this is your queue for the final fight coming up. Your map will also update as soon as you enter this room. 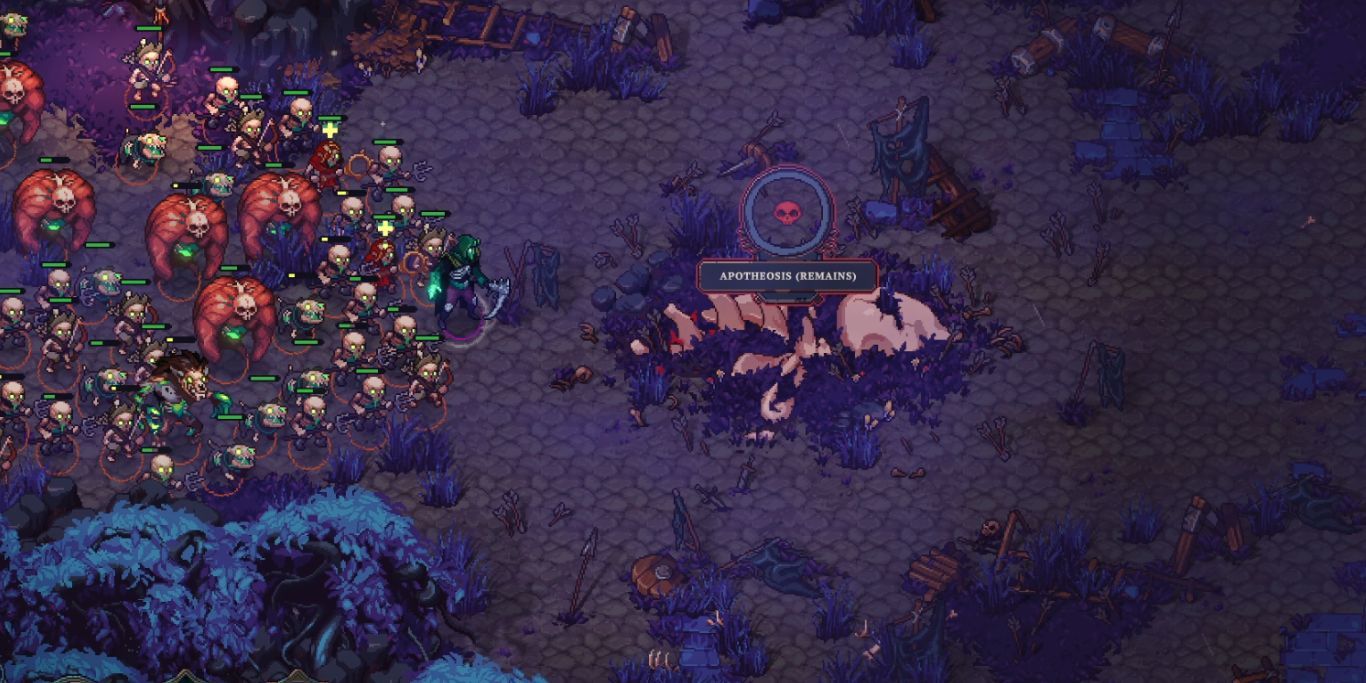 In the final room, you'll see the remains of Apotheosis in the ground with a wide battleground. The main goal is to defend the giant skeleton while it destroys the walls and makes way for you to get to the next area. This final battle always stays the same.

Go forward to the right end of this room to exchange some dialogues before humans start appearing from hatches all around you. Defeating these humans will recharge Apotheosis' blood and you need to fill the bar to resurrect it.

After defeating all the humans in the area and waiting for Apotheosis to destroy the first set of walls, you can move forward behind the giant skeleton until more enemies appear.

The rule of thumb for this segment is to clear all the side paths. After Apotheosis gets through the first wall, there will be a bunch of enemies with giant towers at the top side. These towers can quickly take away the giant skeleton's health, so it's important to defeat them. 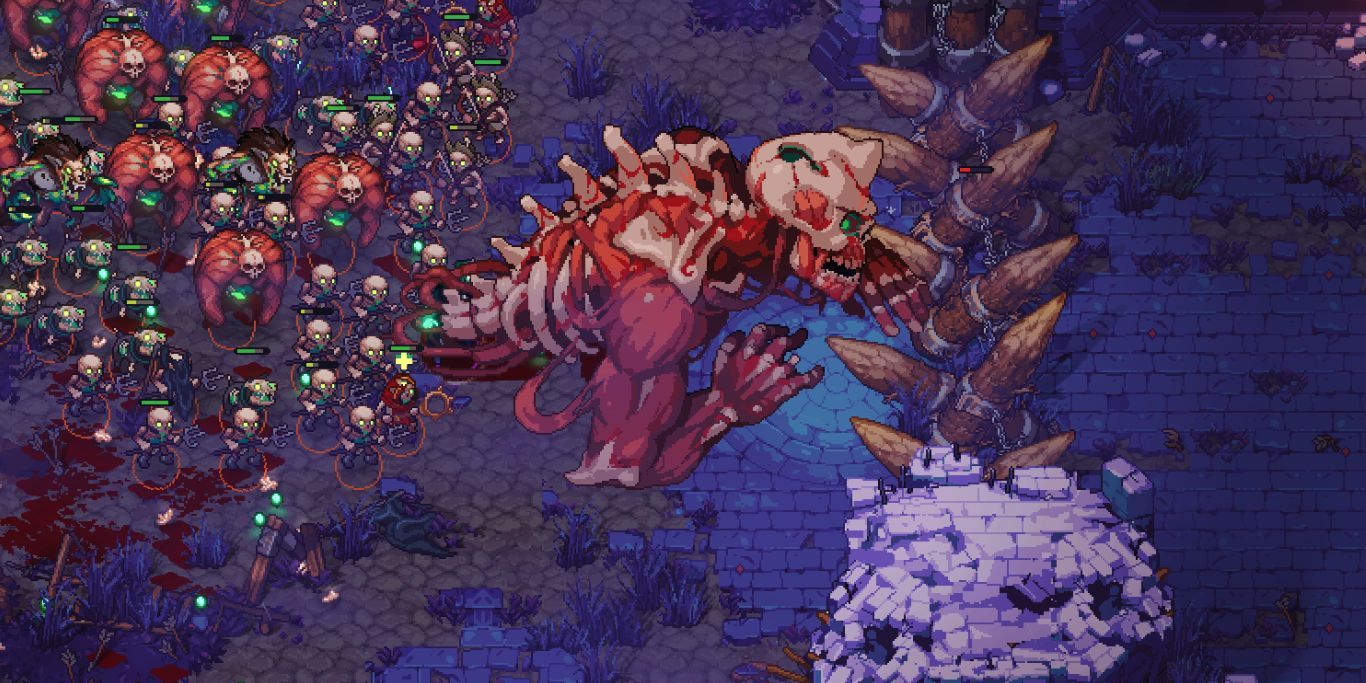 After clearing the top path, head to the bottom of the room and you'll see another set of enemies that you need to defeat. Removing all the towers will start the last part of this fight where you have to defeat even more humans from hatches.

Apotheosis will go back down after getting rid of the final wall, and you can interact with it to instantly kill your undead army. This is required if you want to get the Bone Shard from its body, but you don't need to do it in subsequent runs after you get it. 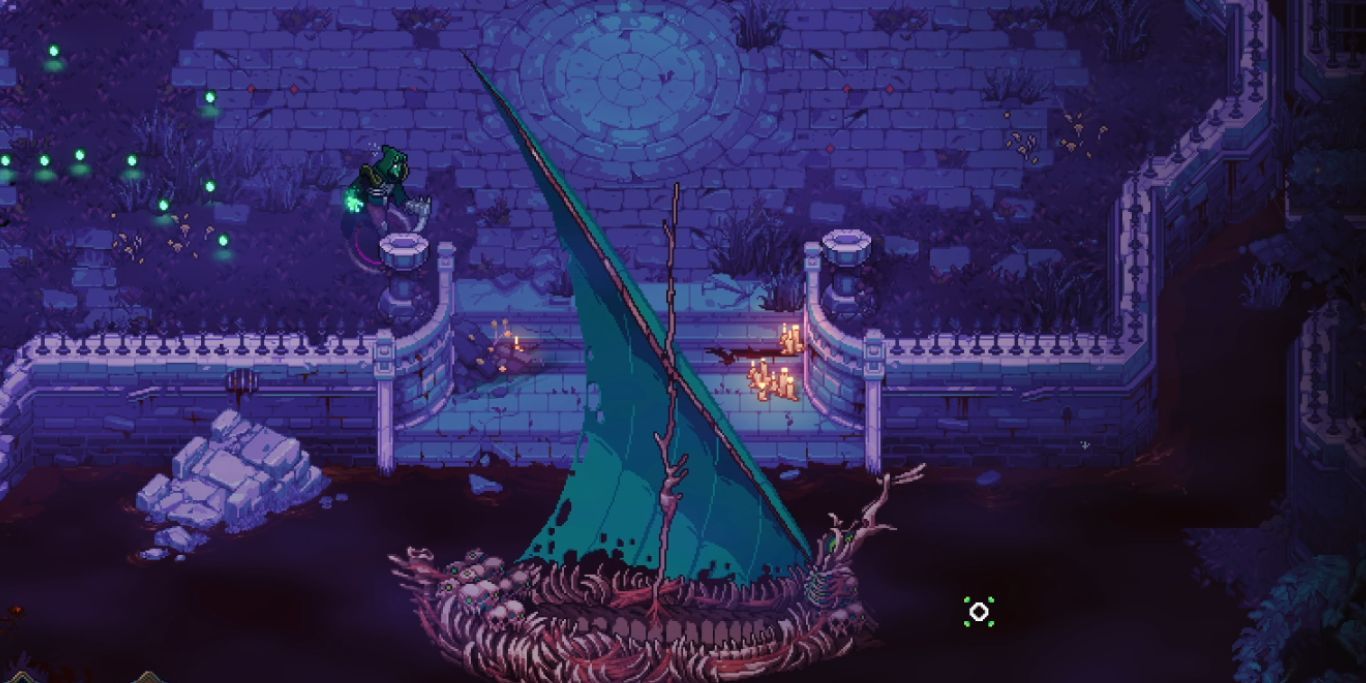 To finish the area and get to the next one, you can go to the right and resurrect the body floating in the water at the bottom. This will spawn a boat that'll take you to Caredhwaithian Mires.

You might not get the Bone Shard when you interact with Apotheosis for the first time. When you go back to Edge of Immortality, some dialogues tell you where the required item can be. 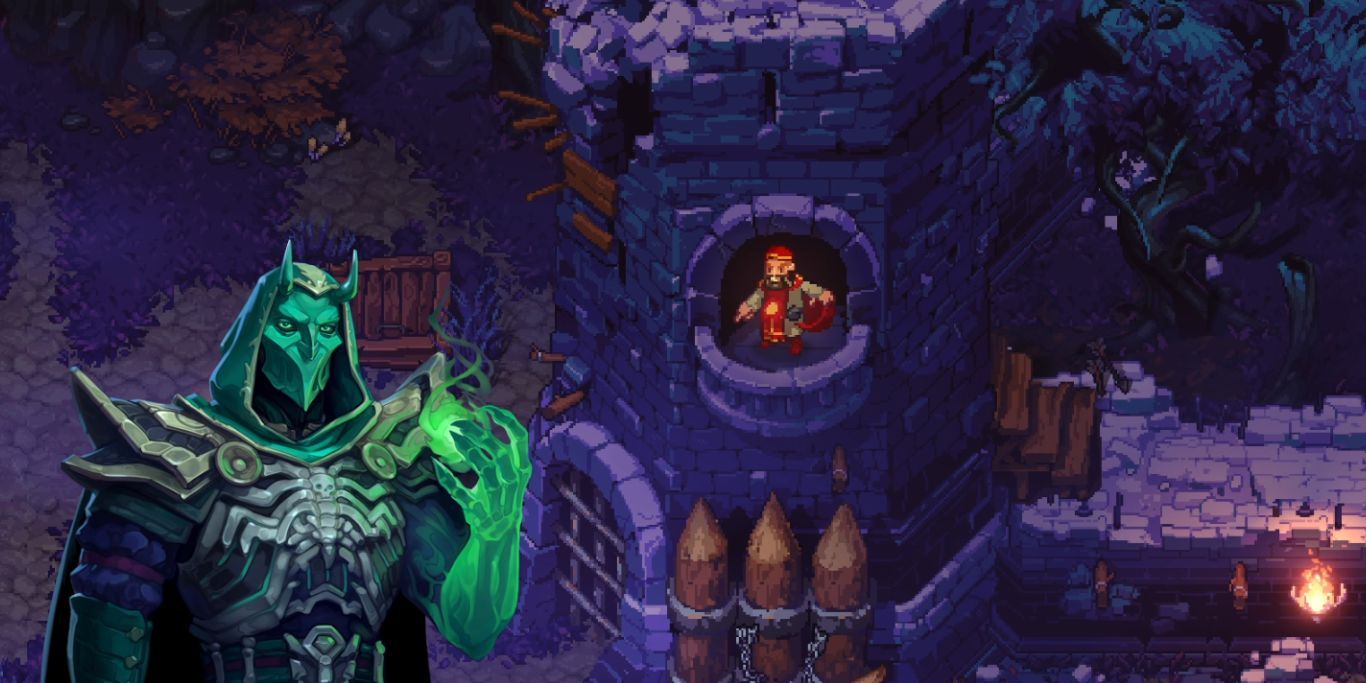 Here are a few tips that you can pay attention to while going through different rooms in Burial Isle to give you an upper hand: