One of the coolest additions to Thymesia’s gameplay formula is Plague Weapons. These magical green special attacks can be incredibly powerful if you know when to use them, but the thing is, there are so many of them, how do you even choose which ones to bring? Not only that but when are these weapons worth using over a basic sabre or claw attack?

Well, the truth of the matter is, they are not meant to be used as a primary source of damage, and they are much more a utility pick that is used to enhance a build – not necessarily make one. That being said, there are some staggeringly powerful picks, and we are going to go through them all. 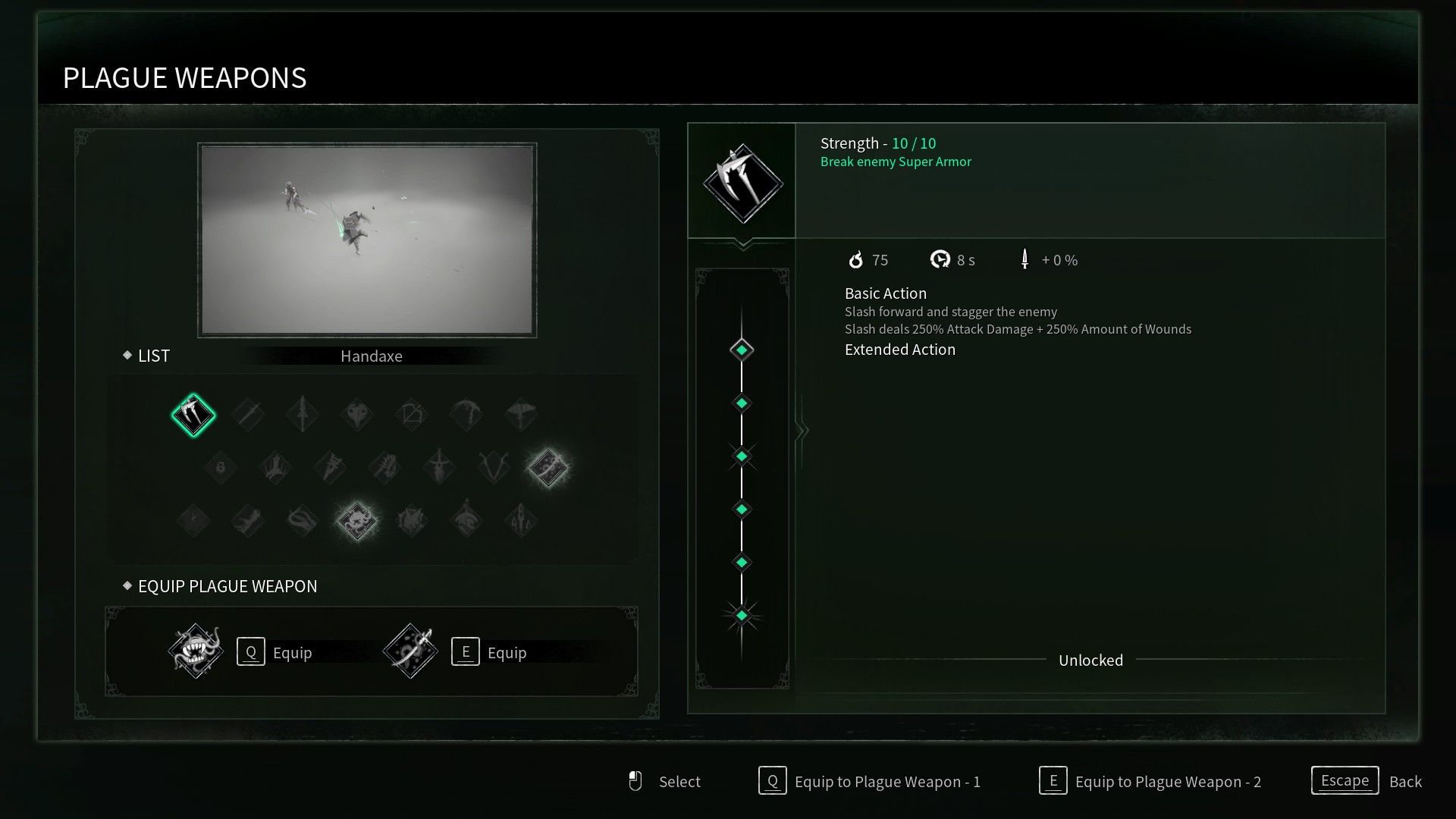 The hand axe is one of the first Plague Weapons you will get your mitts on, and it is one of the best. The hand axe comes out fast, it deals great damage to both HP and Wounds, and it has a decent cooldown letting you whip it out on command. Topping it all off, Shards are very common, so you can max this out very early – making it even stronger.

What’s more, the hand axe is rocking up with a fantastic Extended Attack. Instead of dunking on some hapless plague victim, you can reduce your damage output and throw your axe. This utility makes the hand axe and round a fantastic pick that can help you throughout the game. 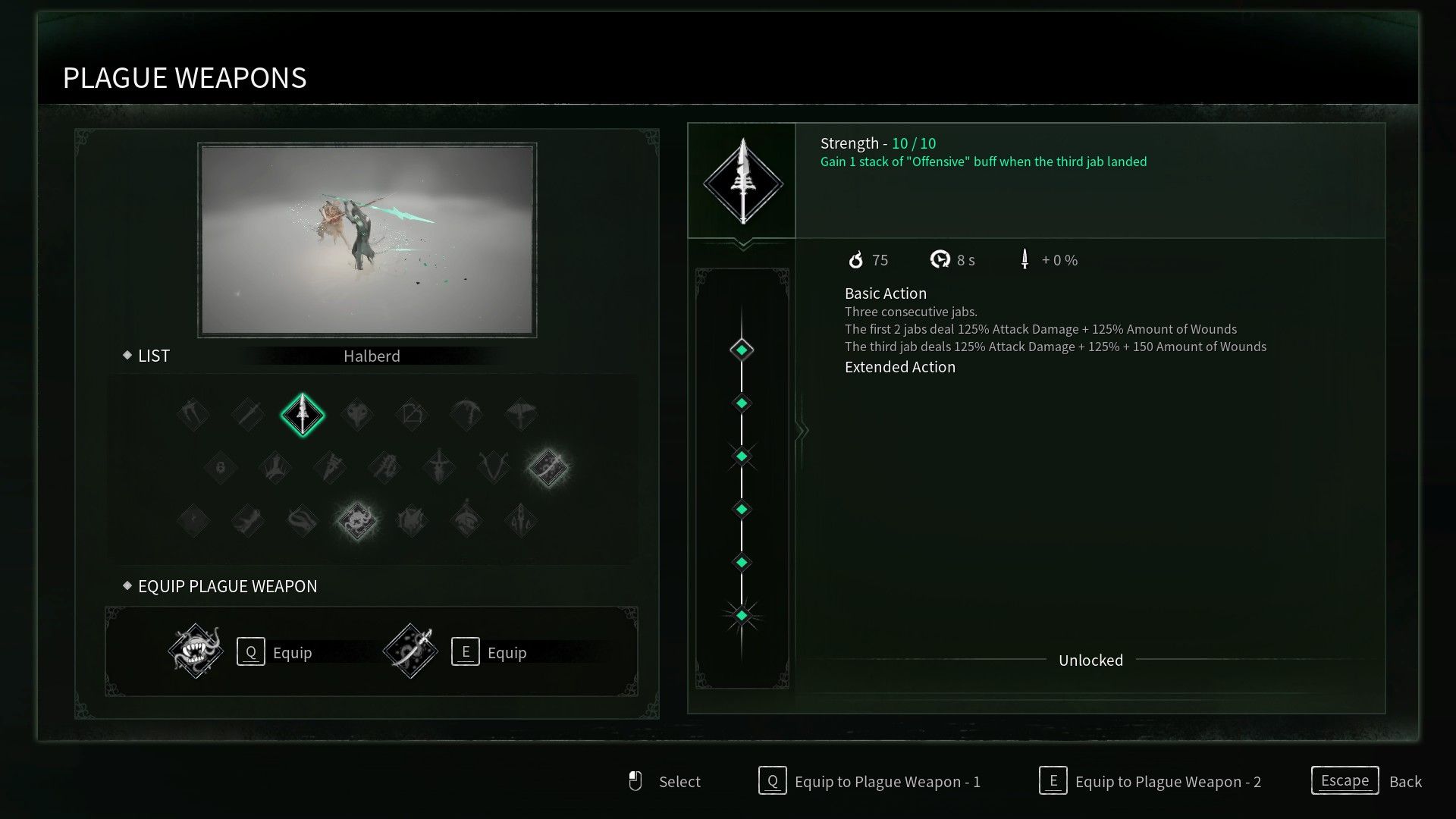 Another early Plague Weapon, but another downright slapping pick. The halberd is the king when it comes to combat utility. This thing can do everything. It deals great damage, it hits three times, and it can stagger enemies. When upgraded, it even applies a damage buff, making you slightly stronger every time you cast it.

Not only that, but the halberd has incredible range, letting you stand far back and deal damage safely. Heck, it can even pierce through enemies giving it some excellent AOE potential. Speaking of which, its Extended Attack turns its stabs into sweeps, making it even more of an AOE powerhouse. The halberd can slot into any build and do well. It’s also an excellent pick for Reave. 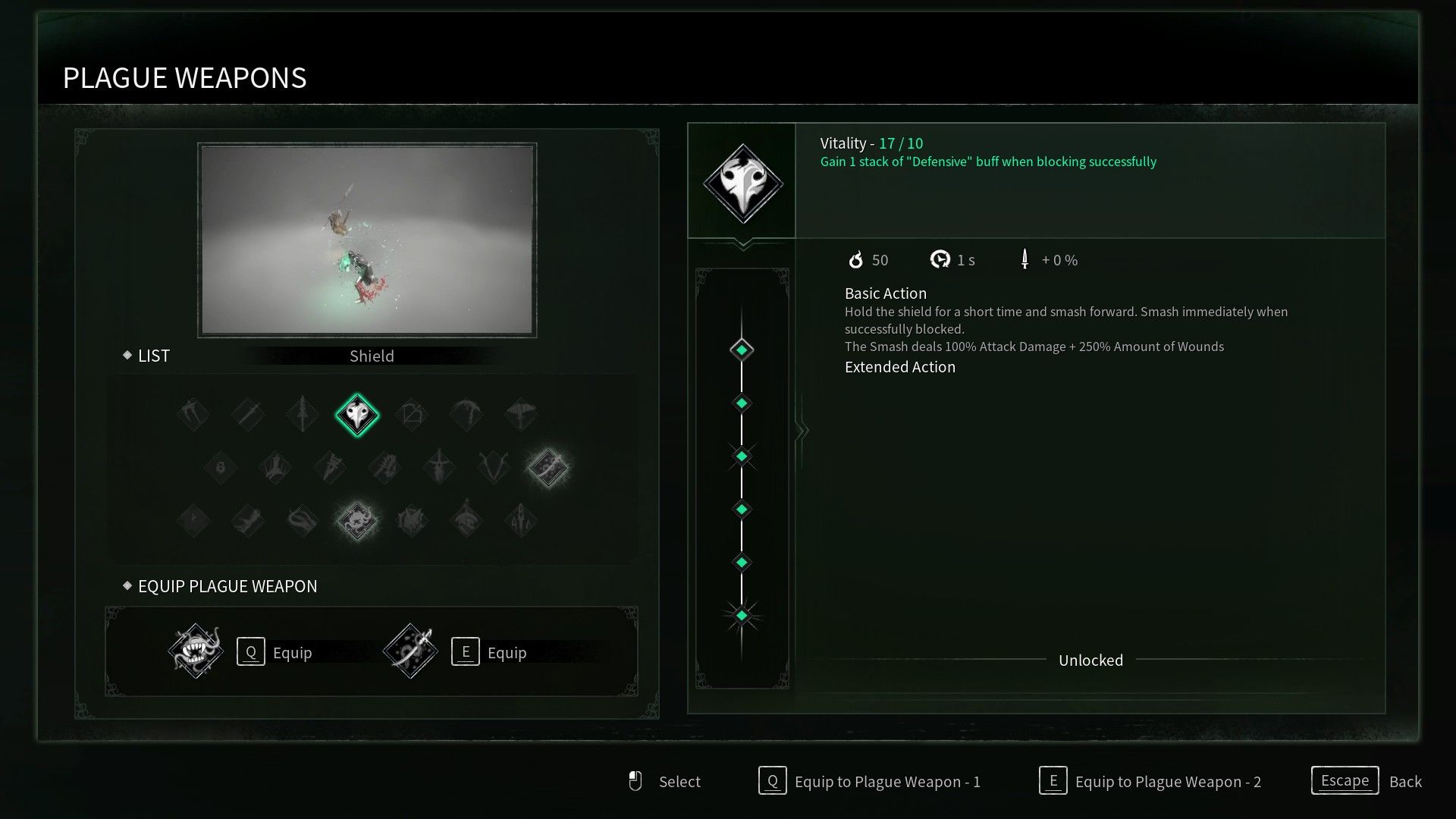 We are going to move away from strictly offensive Plague Weapons, and move onto something a bit more defensive – the shield. The shield lets you perfectly block just about any attack, and if you successfully do that, you will immediately cancel the block and deliver a powerful shield bash.

It is that simple. If you can’t get the timing on a powerful single attack, like a jump attack for example, then the Shield can cover that weakness. Its Extended Attack is also excellent, increasing the damage substantially and providing some great crowd control. 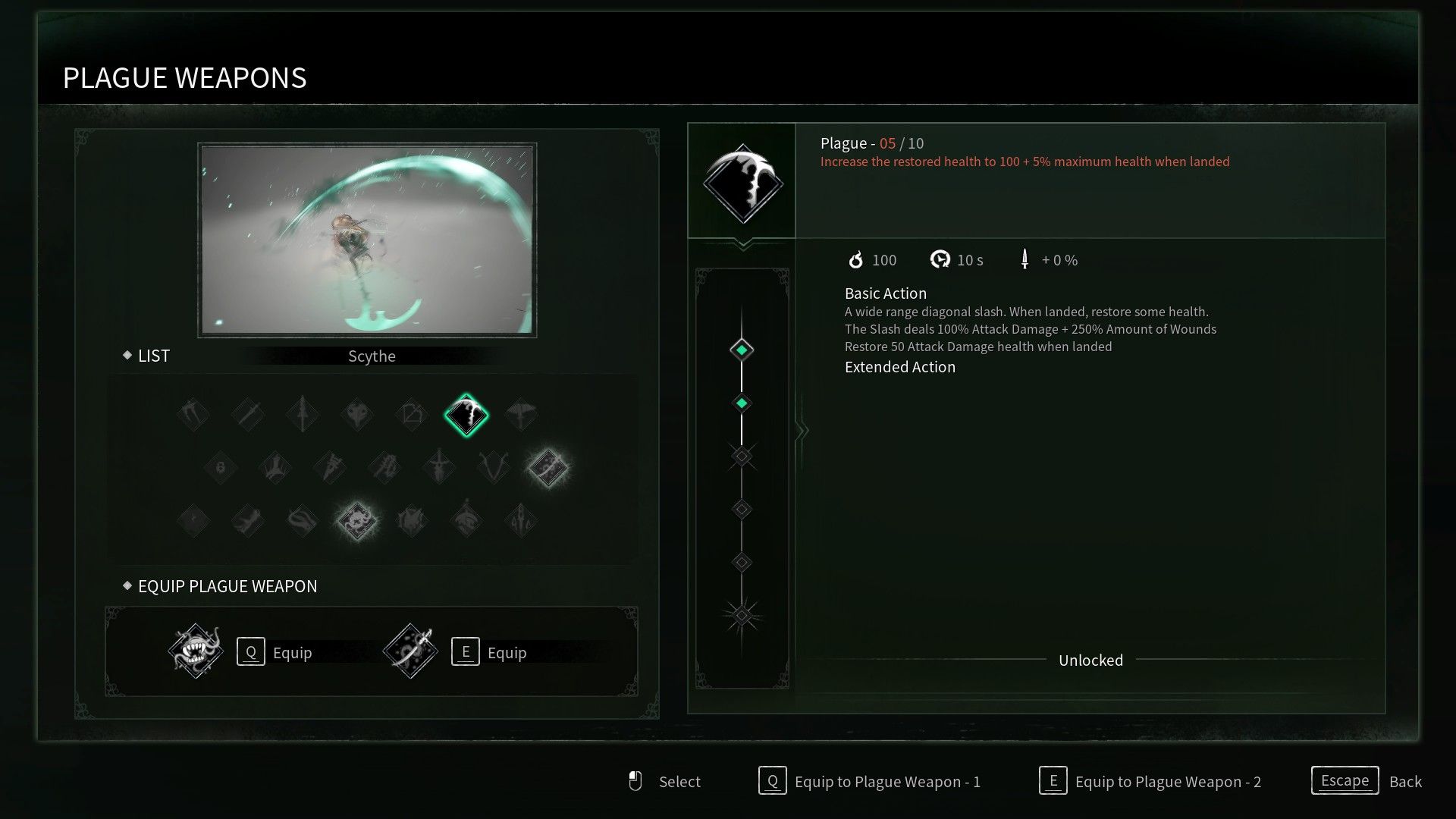 The Scythe is a fun weapon. It comes out a bit slow and the damage is not the highest, but it attacks in a wide area, and every time it hits something, it heals you. The heal is not insignificant either. It can be used as a way to save on potions if you use it against large groups of enemies.

Its Extended Attack is also excellent, turning it from a single swipe, into a combo. Overall, the Scythe is an excellent weapon, and it’s fairly easy to max out thanks to how common Scythe enemies are in the Royal Garden. 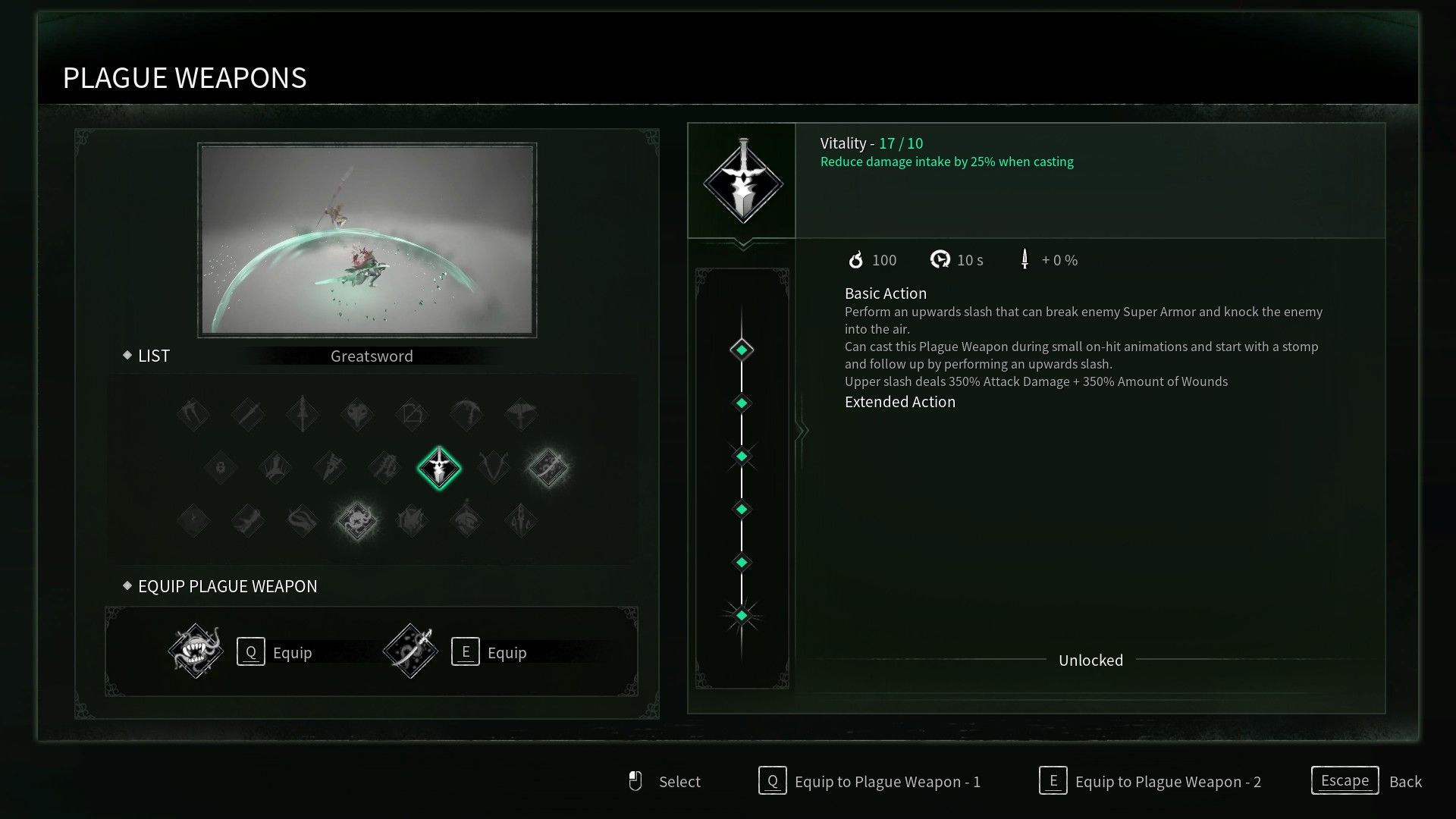 The Greatsword is the king of swing. This thing deals outstanding damage, and it comes out shockingly fast. It is as simple as an AOE sweep followed by a jumping slam, and it’s unbelievably satisfying to pull off. Its Extended Attack is also pretty great.

What makes the greatsword truly shine, however, is its passive bonuses if you have the right stats. With the right build to support the greatsword, you can not only gain Super Armour but 75 percent damage reduction when using this Plague Weapon. This allows you to power through any attack in the game, and land a hugely punishing blow in return. 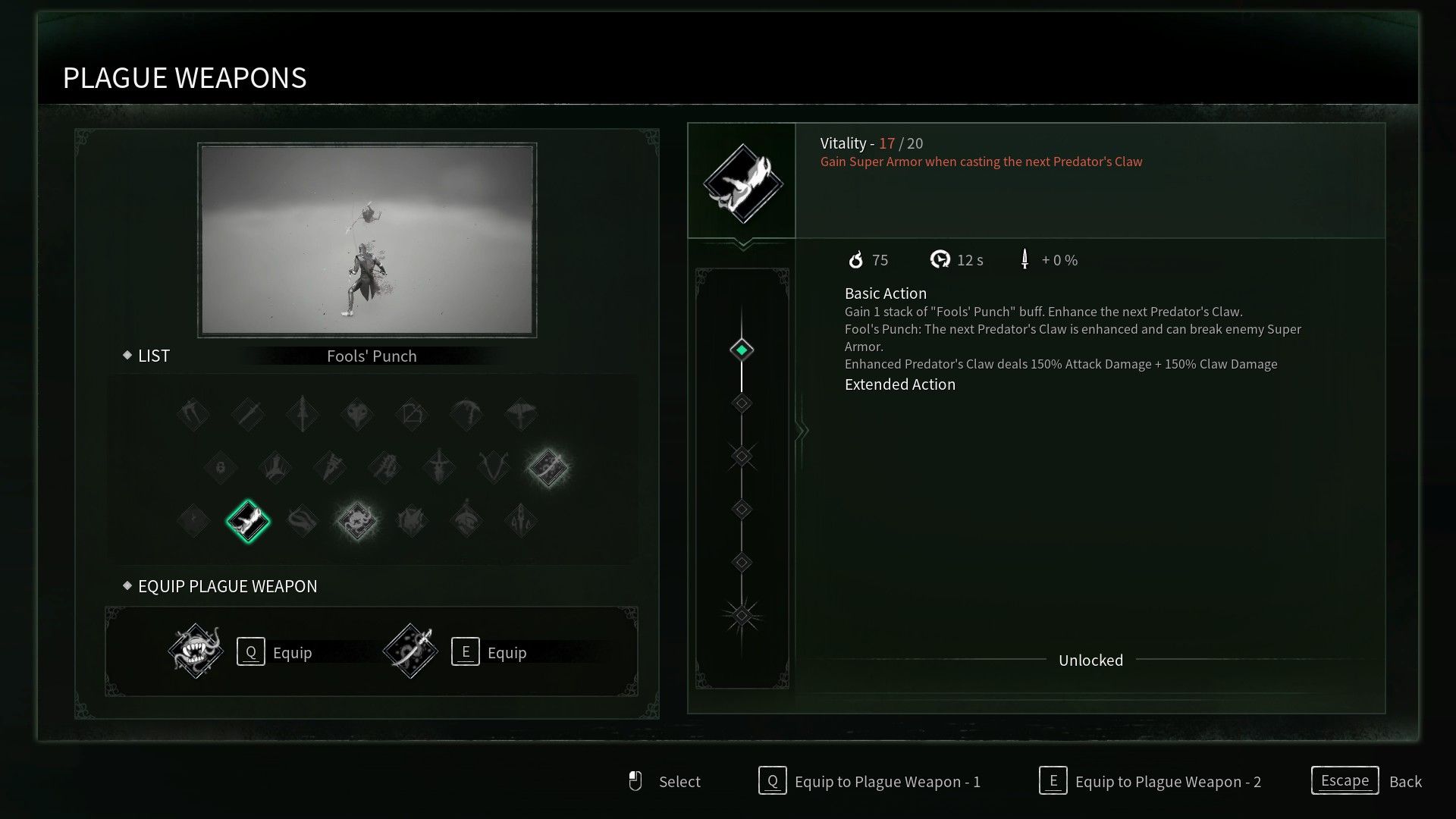 This is an odd weapon that is only useful if you run it in a very specific build. This Plague Weapon does next to no damage compared to anything else on this list – but what it does do is increase the damage of your next Predator’s Claw attack by a huge amount. This is where things get interesting.

If you take Fool’s Punch and the Feather Upgrade that makes it so Predator’s Claw charges faster, then you can Fools Punch for a small amount of damage, throw a Feather, rapidly charge Predator’s Claw and then take a massive chunk out of any enemies' Green Health. Not only that, but when Extended, you can combo Predator's Claw into another attack, which deals even more damage. Nothing out-damages this combo, but it can be tricky to pull off. 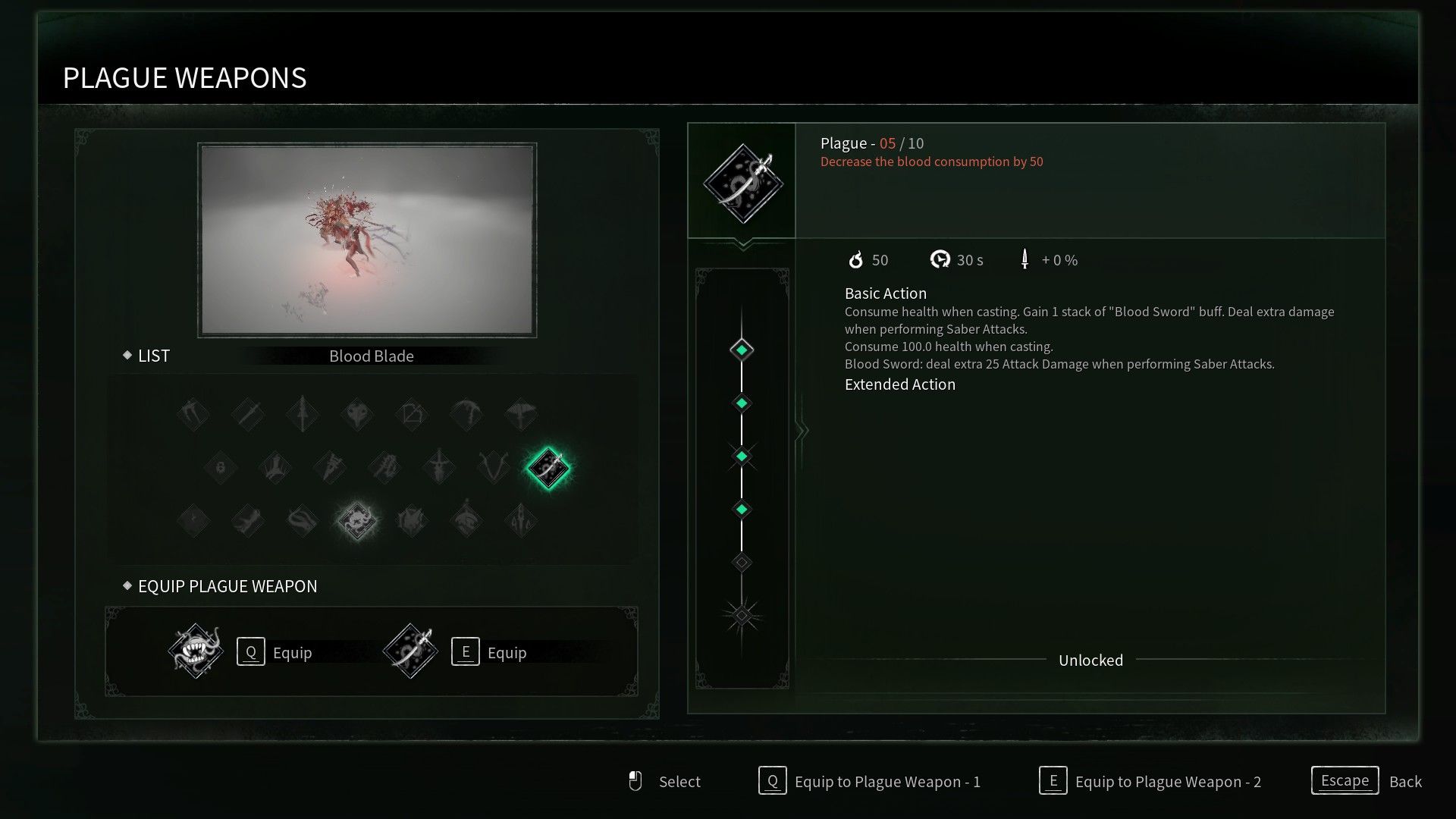 Blood Blade is our go-to secondary Plague Weapon. It is simply wonderful. You take a small hit to your Health on cast (no Energy cost), and in return, all of your sabre attacks deal 25 bonus damage. This is roughly doubling your damage per sabre attack, and it lasts for a long time.

Not only that, but each attack also builds up a stacking buff. You can then use your Extended Attack to burn those stacks and unleash a powerful slash attack that scales based on how many stacks you had. Not even bosses can hold out for long against the overwhelming Sabre damage Blood Blade provides. 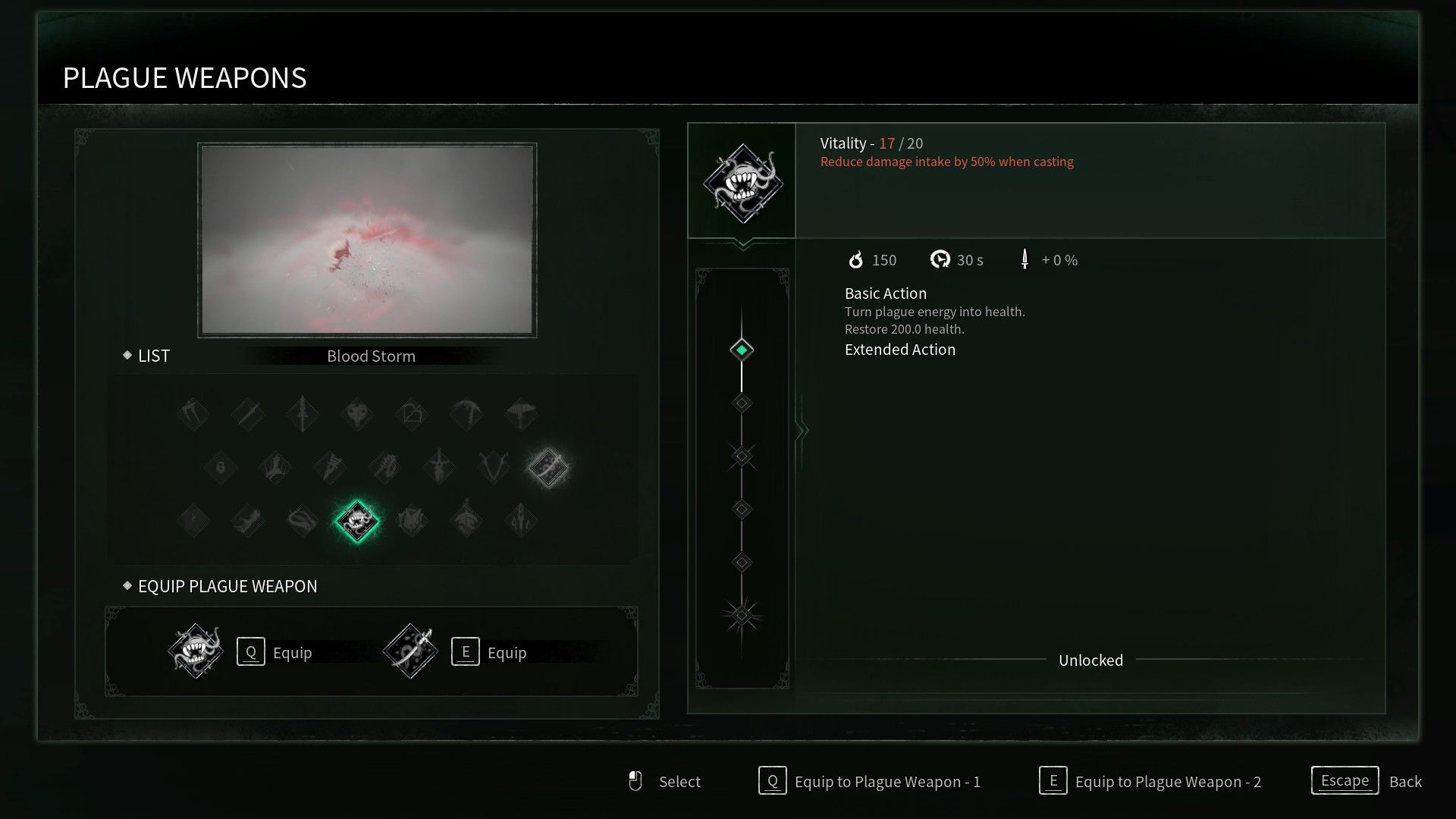 This is our favourite Plague Weapon. It is so good, you don’t even need to upgrade it. At level one, it is simply the best choice. You slot this in, and you are good to go. Blood Storm heals you for 200 health. This is about as powerful as an Long Potion, but it costs a lot of Energy to cast.

It’s worth it, of course, because you can restore your energy to full every encounter due to the overabundance of Energy Talents available to Corvus. So what this means is that you can heal yourself after every encounter, for free, and you don’t need to touch your potions to do it. Throw in healing from Executions, and you can fly through entire areas and never need to sip on your flask. Truly outstanding.