The Teenage Mutant Ninja Turtles comics and TV shows have been stellar over the past decade, but it’s been rough for us gamers. Nearly everything released under the Turtles’ name has just been fine at its best or insulting at worst. That’s right, Turtles in Time Re-Shelled, you offended me.

After the weird co-op mess that was Platinum Games’ Mutants in Manhattan, Leo, Raph, Donnie, and Mikey have all but disappeared from the gaming space, relegated to Brawlhalla skins and the occasional cameo in fighting games. For something as perfect for the medium as the Ninja Turtles, seeing them slowly fade away has been a shame. But now Tribute Games has emerged with a solution – go back to what worked and make it even better.

This vision sums up Shredder’s Revenge perfectly – it’s Turtles in Time but with every single element turned up to 11. Features editor and fellow Ninja Turtles fan Eric Switzer had the same sentiment after sampling it at PAX East 2022, while I recently had the chance to preview it from the comfort of my own home while drinking from my Ninja Turtles mug – it’s pretty clear who had the better experience, right? I ended up playing the demo around 12 times, twice with each character, so I like to think I’ve got a pretty good feel for what it’s all about. 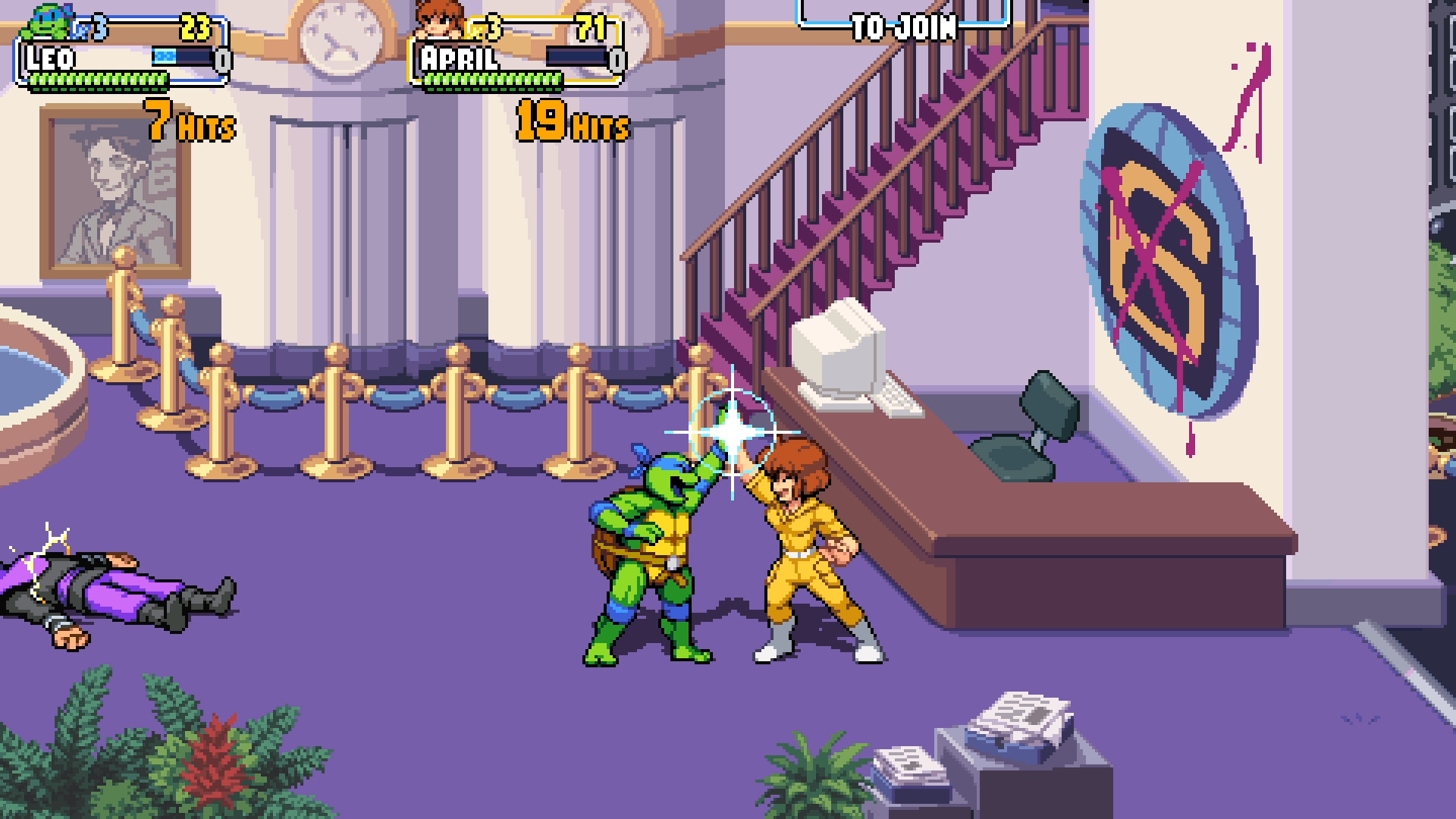 My preview took place across two levels – one set in a TV station where you eventually go up against BeBop and another set on the streets of New York as you make your way toward Rocksteady. Both felt like introductory levels and weren’t especially difficult, but they gave a good feel for waht to expect from the rest of the game.

Although Shredder’s Revenge clearly takes a lot from Turtles in Time, it thankfully feels a lot more modern and more akin to Streets of Rage 4, minus the ability to wield weapons. Attacks actually feel like they connect, combos feel possible, and there’s a learning curve to combat that’s about more than just getting wailed on and waiting for an opening.

Each character also feels pretty distinct from one another, making a run with Donnie plays differently than one with Splinter. Rather than just having one or two attacks, each character has a whole combo list and different moves to use, as well as three different types of special move depending on if you perform it while dodging, on the ground, or in the air. The select screen also shows different base stats like reach, strength, and speed, but it never felt like one character was significantly better than the other in any category to me, and more felt like minor advantages. If you have a personal favourite, you can pick them and still have loads of fun. 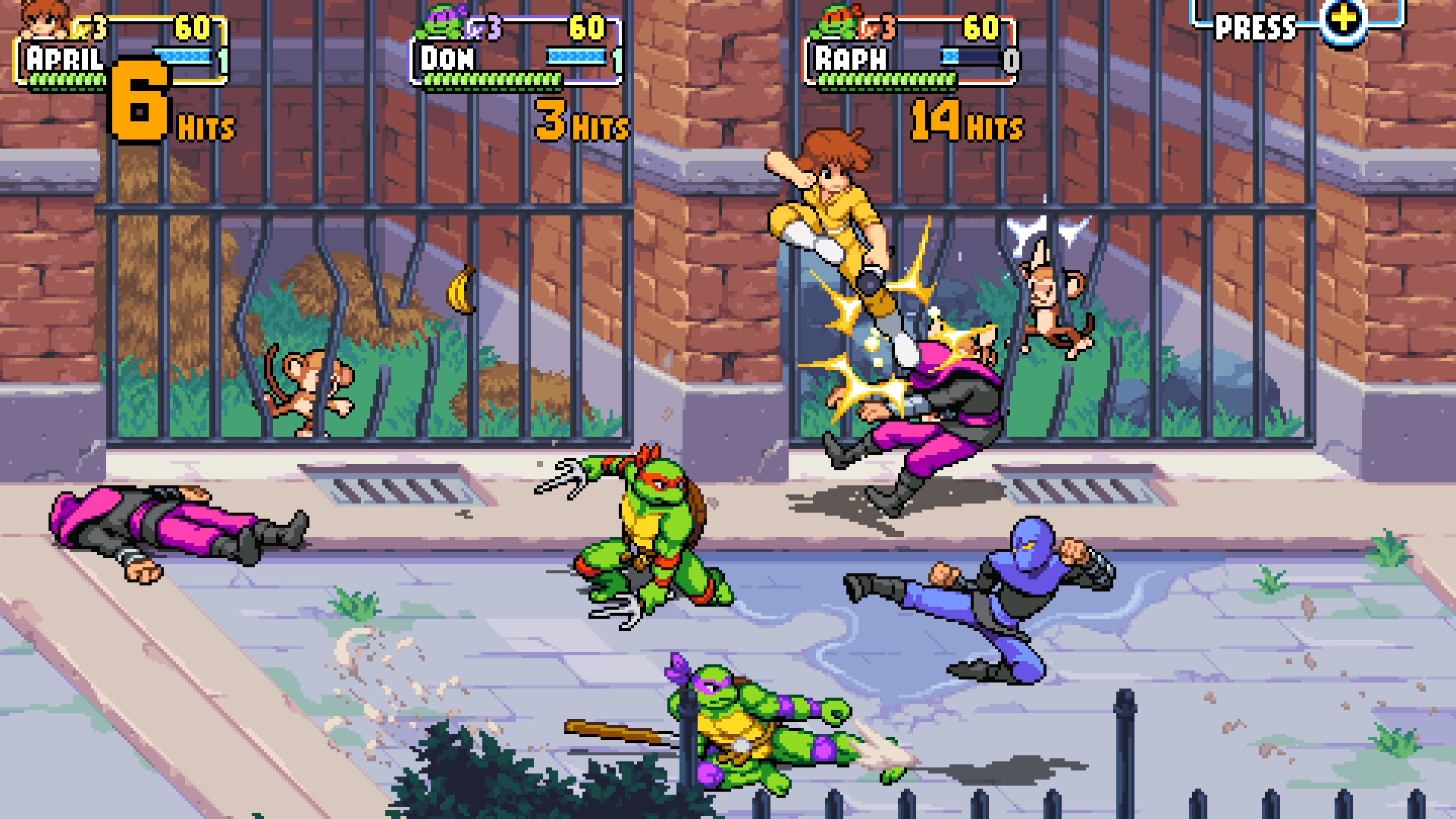 Thankfully, no matter who you choose to play as (although if it’s not Donnie, you’re wrong), Shredder’s Revenge is crunchy, fast-paced, and beautiful to watch. The love and care that has gone into every facet of it is apparent from even something as simple as the walk cycle animations, and seeing all of these little details has me excited to see what the rest of the game has in store.

One thing I noticed straight away about Shredder’s Revenge is its difficulty, or rather, a lack of it. These first two levels went pretty easy on me and gave me plenty of chances to recover health or use room-clearing special attacks. Rocksteady and BeBop were also pushovers, which is probably intentional considering how useless they are, and my dodge felt like it had enough invincibility frames to get through anything with the right timing.

To be clear, this is absolutely a good thing, as Turtles in Time could feel a little cheap sometimes, which isn’t the case here at all. Enemies feel like they follow the rules and my hits always connected. This might change in later levels with harder bosses and enemy types, but from what I’ve played, you shouldn’t be worrying about enemies that can inexplicably block everything like in Scott Pilgrim. 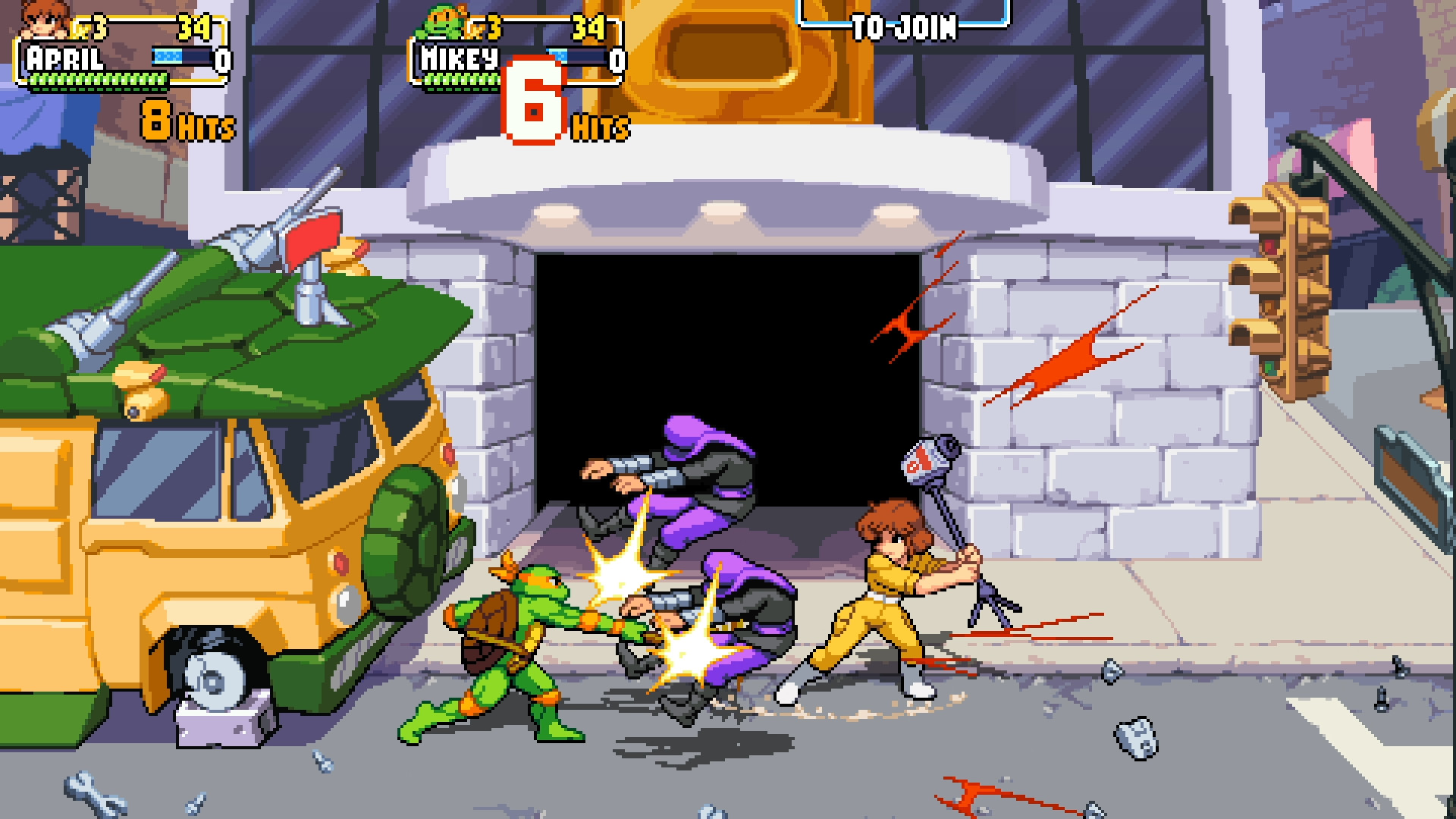 The big worry I’ve seen in most discussions about Shredder’s Revenge is length. Hey, it’s about how you use it, right? Anyway, projecting aside, it seems like there’s really nothing to worry about. From speaking to Tribute Games’ Frederic Gemus and Dotemu’s Jessica Richard, I know that what I played really is just a small taste of the full experience. The two levels in the preview didn’t include any of the bonus objectives I’d been told about, didn’t allow me to level up at all, and didn’t give me the choice of playing on Story or Arcade mode.

Even with all of that missing content, I still got a good two hours out of just wanting to keep playing it, checking out each character, and trying to get through the stages without taking damage. I simply didn’t want to stop playing, and if you feel that way and go through every level with every character while looking to do every objective, you’re going to have a pretty packed experience ahead of you.

Shredder’s Revenge was already one of my most anticipated titles of 2022 on the basis of it being a new Teenage Mutant Ninja Turtles game, but now that I’ve actually had the chance to play it, I can see that it’s shaping up to be one of the best games of the year, regardless of whether you can sing the theme song from every individual era. It’s both a love letter to the Ninja Turtles and a stylish, crunchy beat-em-up that truly has the potential to be the best adventure the heroes in half-shells have seen yet.