Ever the heroes, Serenoa and his cohorts have elected not to fork over the Roselle like human leftovers to the tyranny of Hyzante. War is thus inevitable, and House Wolffort knows it in full; but an unexpected enemy will soon stand before them, drunk on Hyzante's whispered promises.

As ever, the wheels of a branching narrative are turning in Triangle Strategy. No matter what happens next, blood will be spilt upon the fertile soil of the Roselle's hidden village – armed with our guide, you can make certain it won't be yours.

The party gathers to discuss the clear ramifications of their "betrayal' against Hyzante. Saint Serenoa isn't exactly going to earn any brownie points for this flagrant act of defiance. News soon comes via the ever-reliable Anna that an unknown foe marches their standard toward the Roselle.

At the Rosellan Village, a ruthless mercenary named Rufus stands before Jerrom and his peers, delivering the inevitable ultimatum. If you're listening to Triangle Strategy's English dub, Jerrom stands defiant. If you're listening to the game in Japanese, Jerrom pretty much sounds like he's going to crack Rufus' skull right then and there. Just a little trivia.

Milo confirms that she has taken care of Idore's directive to lure the ever-envious Silvio Telliore into aiding in Hyzante's removal of the Roselle from their village in the Wolffort Demesne. 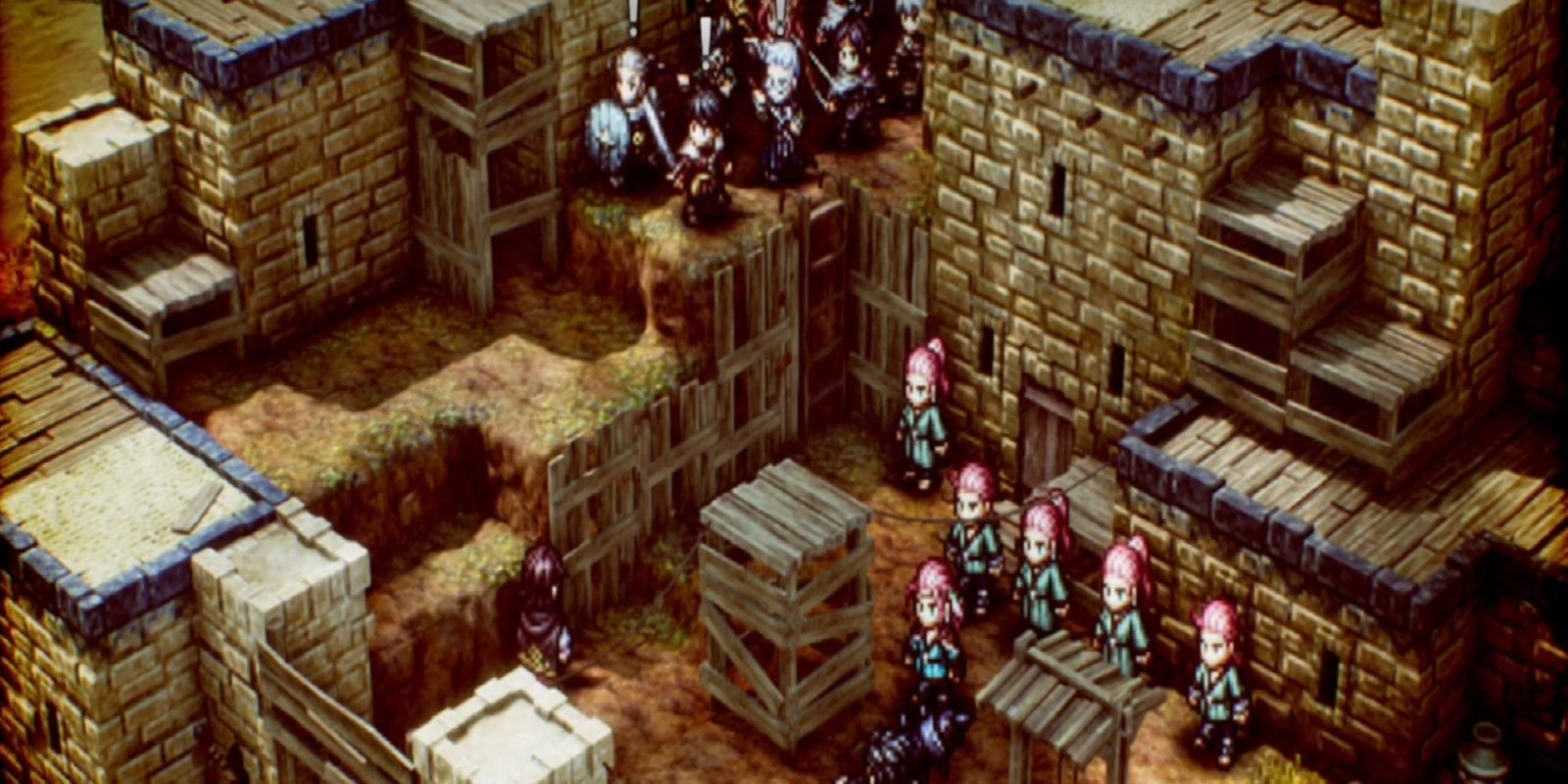 Well, this was inevitable the instant House Wolffort opted to protect the Roselle. But the identity of the enemy was far from a done deal; it's Silvio's raw jealousy that's to blame here most of all.

Remember that Triangle Strategy's suggested levels per battle are always a rather tall order. You don't need to be Level 18 to win this, but you do need to be prepared. Swing by the Encampment, double-checking that you don't have anyone eligible for a promotion (and the requisite medal). If you really want to hit that high mark of 18, take part in a few mental mock battles. But the most important thing is to keep your weapons as up-to-date as possible.

If you're new to Rufus – he pops up a couple of times on opposite sides of the narrative fence – know that he's as tough to beat as he looks to be, which is to say, rather a lot. What keeps this battle from hitting five or even four stars in our difficulty analysis, then, is the fact that it's an uphill climb for the enemy, not for Serenoa's retinue. There's a limited number of avenues for Silvio's mob to reach you, and we're going to keep them all gated off as best as possible. Let's mosey. 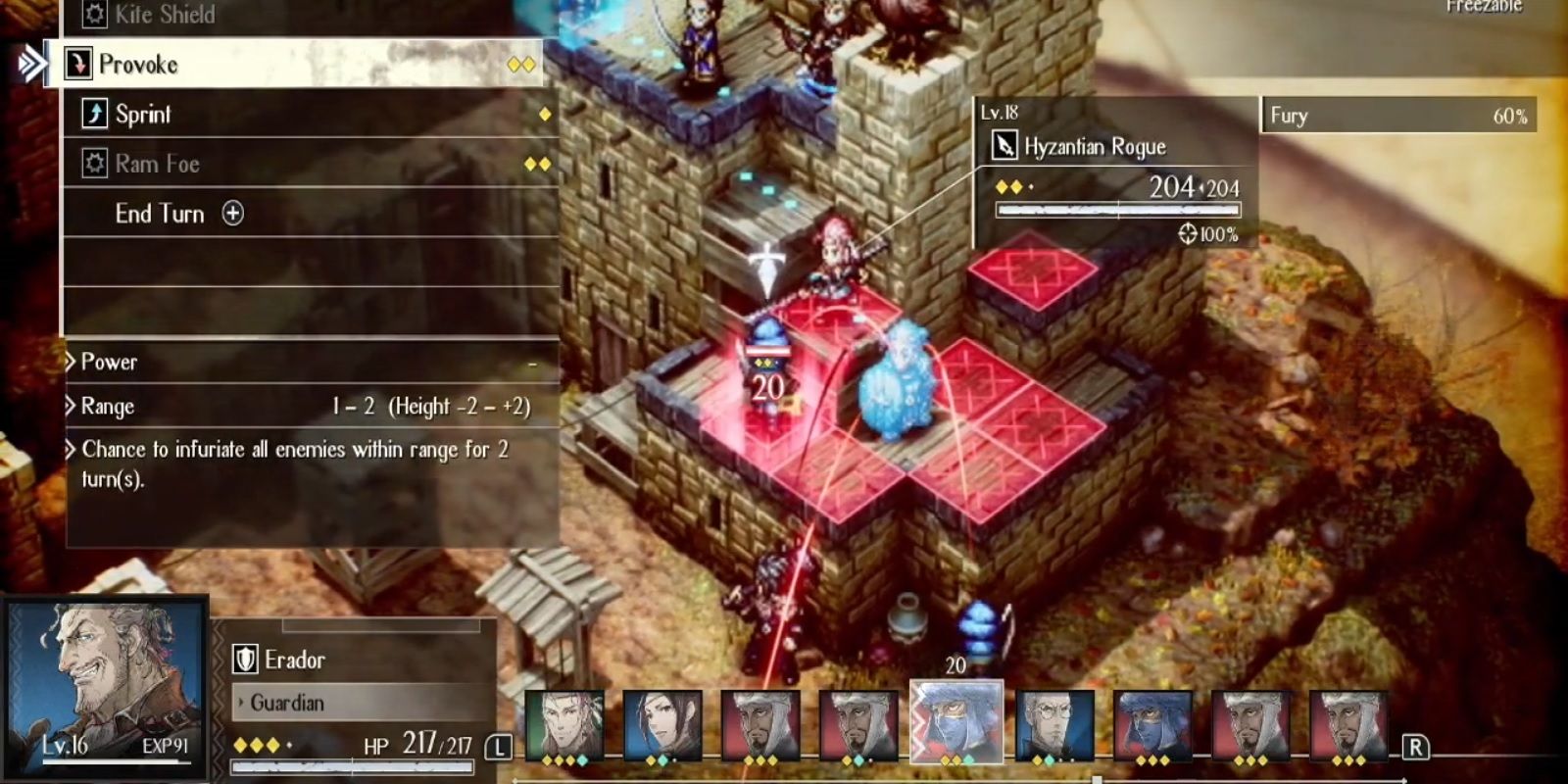 The enemy starts things off split in two. Rufus' troops are with him at the side entrance, already somewhat inside the village, whilst Silvio's impressive group is outside the main entrance. Note that, near Silvio, is a flight of stairs your foes can climb in order to carve toward your forces from above.

The best way to keep the tide from turning against your favor is to protect every chokepoint from the start of this bout all the way to its bitter end. 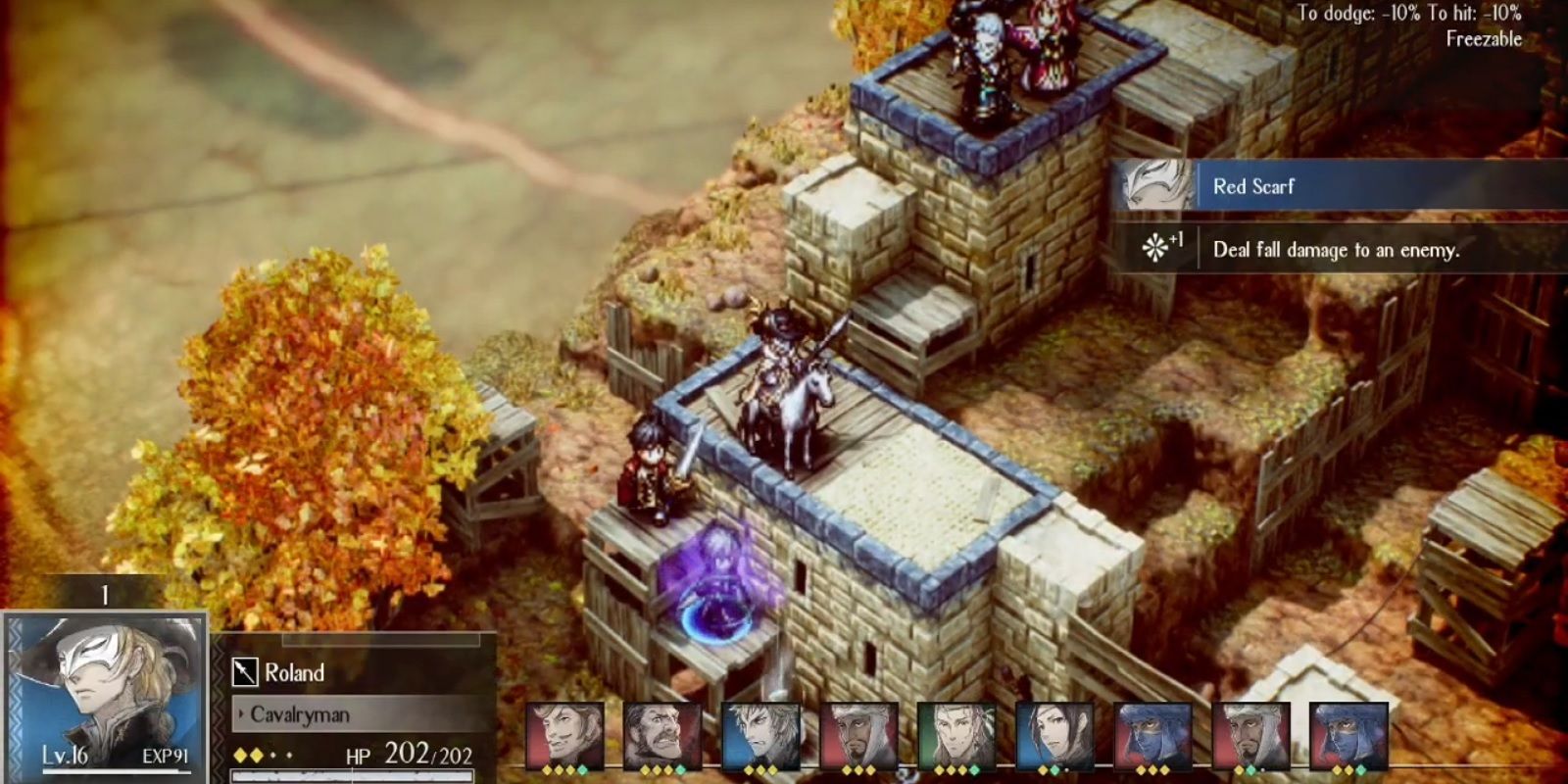 Which is all well and good, but how? We recommend you bring Erador to guard the spot where Rufus arrives, baiting the big guy into taking on your own biggest pal. Have a healer like Geela or Medina further up on the building that this side of your team will begin on, so that they can keep Erador's health topped off. It's important to do this every turn, without missing a beat, so if you need somebody else up there handing Erador potions as well, go for it.

Corentin, if you've got him, is going to be putting in overtime with his Wall of Ice up near that aforementioned staircase. Keep him blasting that off so that your foes must waste turns shuffling through the snow, so to speak. Alongside Corentin should be Hughette and Archibald, if you have him; Hughette alone, otherwise. The gist is that your archers are going to be firing off volleys at your foes as they scramble to break through the ice.

Note that, if you're missing Corentin, this means you have Rudolph instead. In which case, you can replace Archibald if you don't have the old fellow, since Rudolph's also an archer. Or, if you have Archibald, help shore up your defenses up there without Ice Wall by piling all three archers together. 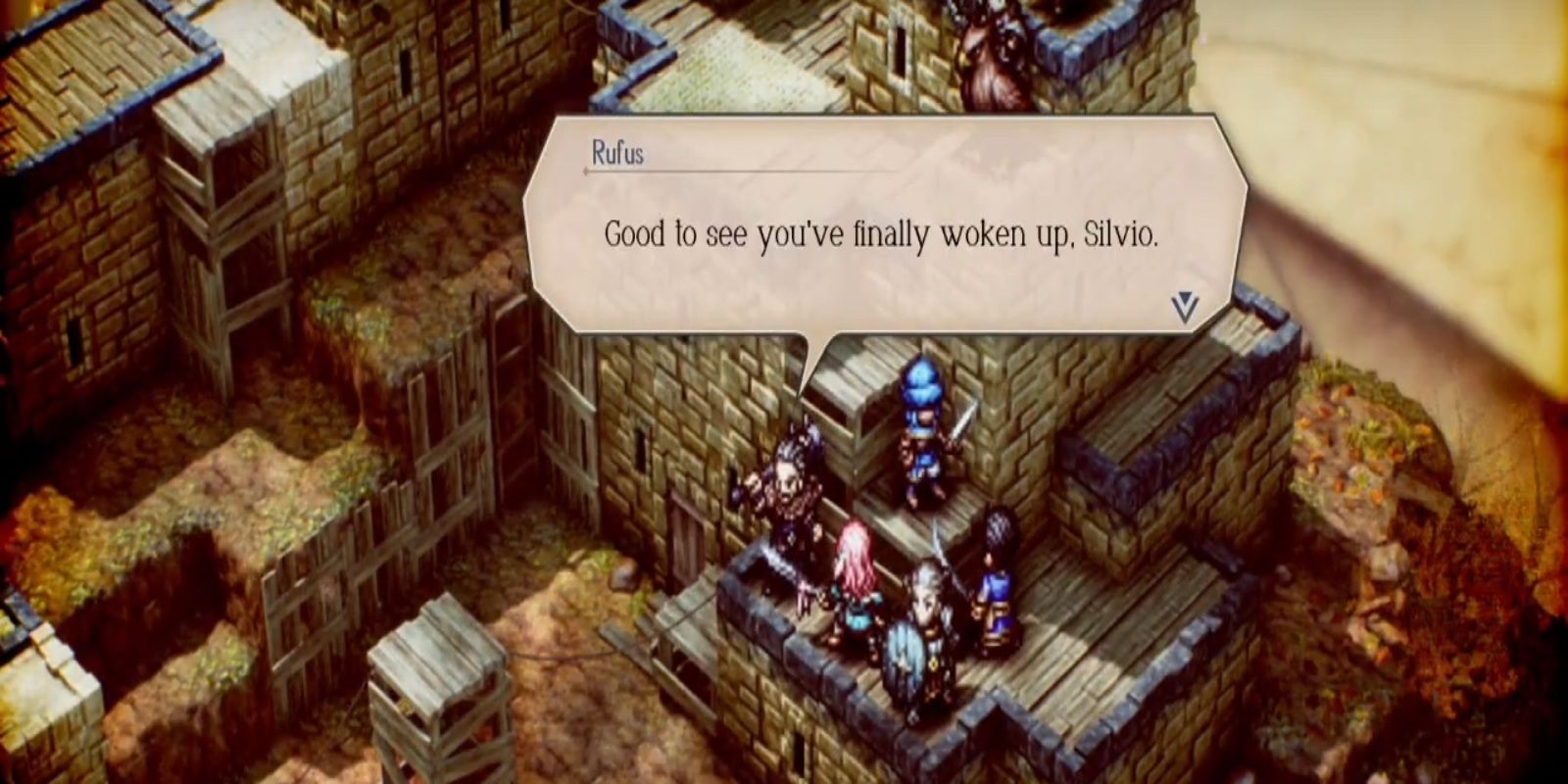 This leaves us with the main entrance, which Silvio and several of his rogues are likely to waltz straight through rather than attempting the stairs. It only takes a few turns for them to effectively rendezvous with Rufus' side, which can make things very ugly for you thereafter.

Or it can set them all down like they're ready for a firing squad, if you play your cards right. Bear in mind that the optimal time to rain hellfire down upon Silvio is when he's almost reached Rufus. You should be able to position Frederica or a similar caster to blast Silvio directly with an area-of-effect spell, harming his nearby allies in the process. Once he's nice and crispy, dispatch two heavy fighters – Serenoa and Roland are great picks – and have them bolstered by supporters such as Benedict or Julio. Slice and dice Silvio to pieces, leaving his more routable rogues behind for the pickings. 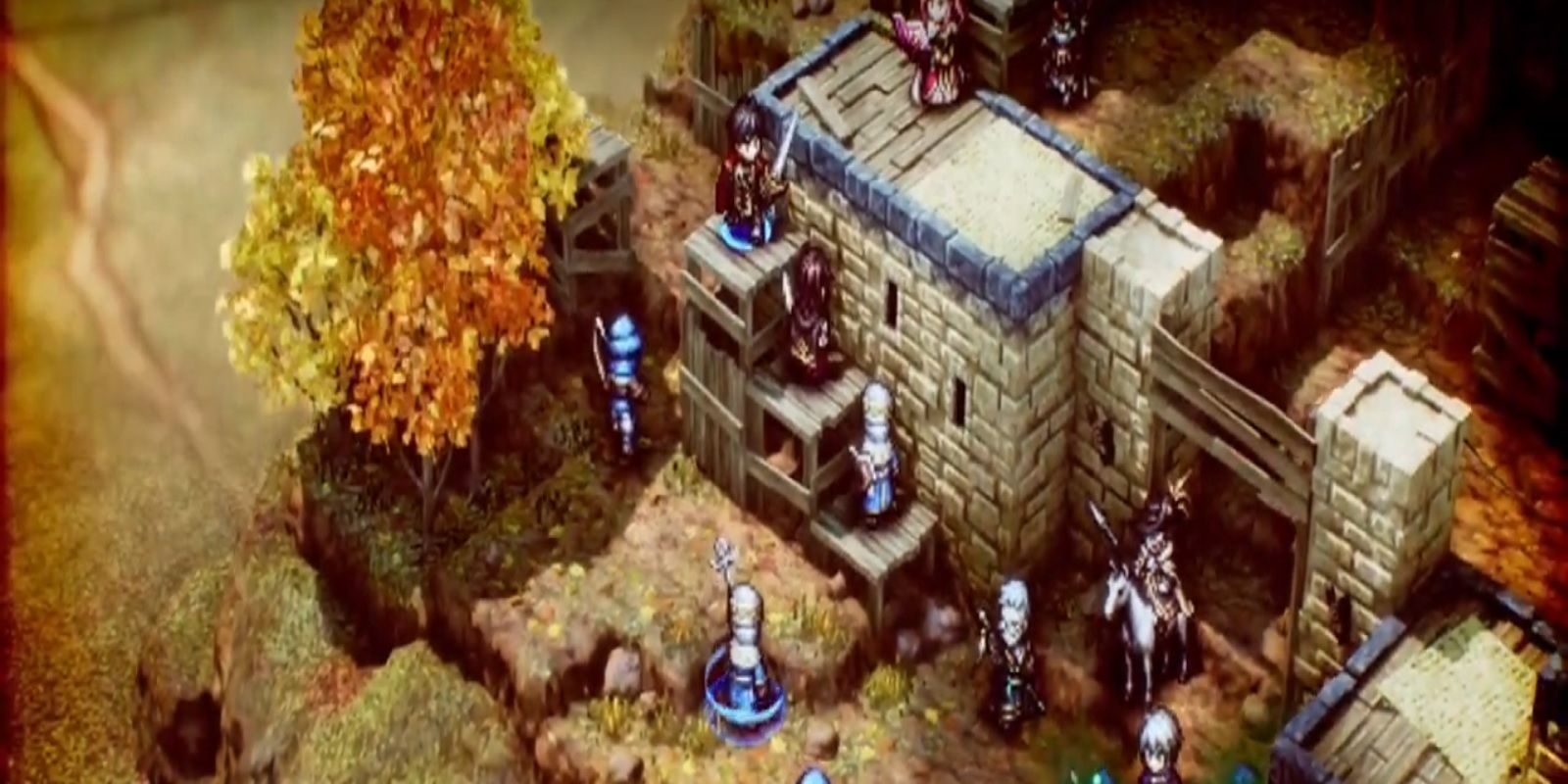 You may be asking yourself what the difference is between making good on Silvio and Rufus bundling up versus getting wrecked as a result. It's all about timing. You don't want to send Serenoa and other physical damage-dealers out too soon, and you certainly don't want to send mages like Frederica until they can target Silvio quickly without being in harm's way. Remember that you started this clash with the height advantage; don't throw it away until you need to do so.

Occasionally, Silvio will switch up tactics and go for the stairs or up the side of the wall instead. If this happens, it's likely due to some unforeseen variable in the mechanics; it's for the best, really, as you'll probably be dealing with just a handful of rogues walking in through the main entrance instead. You can roast them with one of Frederica's fire spells and keep them melting with some hits from perhaps just Roland while Serenoa prepares to take on the schemer head-on.

Oftentimes, Triangle Strategy's most dangerous scenes come to a firm close when resident assassin badass Anna swoops in for a killing blow. Silvio, however, pushes things too far for the relatively calm Serenoa Wolffort, and before you know it, House Telliore has fallen directly to House Wolffort's ruling blade. Let this be a lesson to all, from Glenbrook to Chris Rock: don't insult this man's beloved.