San Diego, California-based Truvian, a startup developing blood-testing technology that leans heavily on automation, today announced the close of an over $105 million oversubscribed series C round led by TYH Ventures, 7wireVentures’ Glen Tullman, and Wittington Ventures. Truvian says the funds will advance development of its benchtop blood testing system and enable the company to grow its product development team.

More than 13 billion tests are performed in over 250,000 labs in the U.S. each year, and errors related to lab testing are more common than you might think. A 2014 study estimated that diagnostic errors for U.S. outpatients occur about 12 million times per year.  More recently, the Institute of Medicine concluded that most people will experience at least one diagnostic error in their life.

Truvian, which was founded in 2015, claims to have developed a blood-testing system that combines chemistries, immunoassays, and hematology assays in one device. (Immunoassays are biochemical tests that measure the concentration of molecules in a solution through the use of an antibody, while hematology assays examine the cause of diseases related to blood.) With its 20-minute, single-run wellness panel that requires only several drops of blood, the company aims to cover about 40 commonly ordered diagnostic tests, including a lipid panel, metabolic panel, and complete blood cell count.

Truvian says its dry reagent and optical sensing technologies, which require no refrigeration, can perform a complete blood count, basic metabolic and lipid panel, hemoglobin and glucose tests, thyroid screenings, and liver and kidney function exams. The company also offers Easy Check, a blood-based serologic test Truvian claims can detect the presence of the antibodies effective against SARS-CoV-2, the virus that causes COVID-19.

“[Our] technology is captured in 12 pending patents in the U.S. and internationally across consumables, optical systems, [and] novel methods of processing blood samples,” CEO Jeff Hawkins told VentureBeat via email. “In addition to the technologies covered in our patent applications, we have a trade secret technology and manufacturing method [for] diagnostic reagents … and have implemented a wide range of algorithms for data analysis, including deep learning models for cell counting and differentiation.”

Infamous startup Theranos also promised to deliver a single device that could perform a slew of tests from a prick of blood. But while Theranos asserted that most of its tests didn’t need clearance from the U.S. Food and Drug Administration, Truvian makes no such claim. While the FDA issued emergency use authorization for the company’s Easy Check test in July 2020, the agency has yet to approve Truvian’s benchtop blood-testing platform. 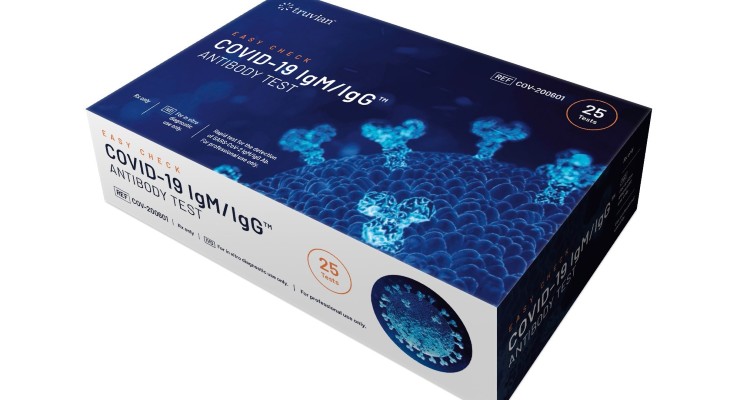 It’s been a long time coming. Over a year ago, Truvian said it was working to receive a CE Mark and submit its product to the FDA for 510(k) clearance, along with a CLIA waiver. CE Marks indicate that a product meets the European Union Directive’s standards for medical devices, while 510(k) clearance and a CLIA  waiver would allow Truvian’s platform to be used in retail and point-of-care settings absent full approval.

Truvian insists these processes are underway. The company now expects to make its first regulatory submission at the end of the year, but it’s been inconsistent in its messaging. For example, Truvian has alternatively said its platform would require five or seven drops of blood.

“In early 2020, the pandemic created challenges in terms of delaying the receipt of components and raw materials we use to produce our instrument and tests, as well as limitations in our ability to keep our laboratory operations running at full capacity,” Hawkins said. “We worked through those challenges, and in the second half of 2020 we significantly accelerated our product development program, implemented a full pilot manufacturing line, and doubled the number of employees in the company.”

If its platform gains approval, Truvian hopes to eventually bring the cost of testing down to around $50 per sample. The company is also building a remote monitoring and serviceability backend that will integrate with Apple and Google’s health apps, as well as powering Truvian’s consumer-facing app, which would provide a line of communication between the company and the patients receiving the results of its tests.

“Today Truvian’s mission, innovative approach, and unwavering commitment to scientific integrity have intersected with significant financial backing and the support of a powerful extended team of credible industry leaders,” Hawkins said. “This is a pivotal moment for the company, as we accelerate our progress toward disrupting the blood-testing industry by making routine diagnostic testing accessible to all without sacrificing quality.”