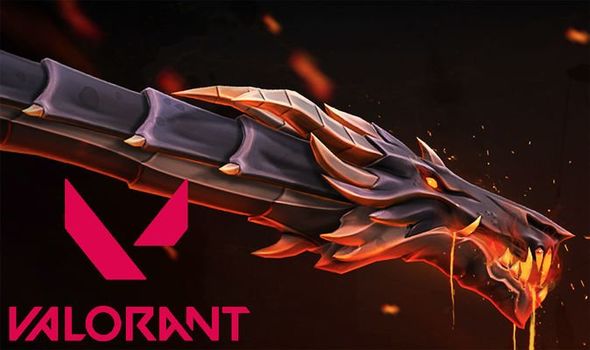 Valorant developer Riot Games is about to release the shooter’s first ever Ultra Edition Skin Collection – and it looks incredible. As you’ve probably seen on Twitter, the new Valorant Ultra Edition Skin Collection is titled Elderflame. The impressive new cosmetic features all kinds of different dynamic effects, and will even transform your weapon into a fully animated fire-breathing dragon.

The awesome new Elderflame skin has been given a July 10 release date, and will be available exclusively from Valorant’s in-game item shop.

Assuming it follows the release schedule of other cosmetics, the new bundle should be available to purchase when the item shop refreshes at 10pm BST for UK fans.

The news was announced by Riot Games on Twitter: “Awaken the fire within. Unlock VALORANT’s first Ultra Edition Skins: Elderflame. Available in the store July 10.”

A Riot Games representative has since told Express Online that additional details such the price of the Ultra Edition skin will be revealed later today. Express Online will update the article when the new information is available.

While we await for official confirmation about the cost of the Elderflame skin, new reports have suggested it won’t be cheap.

Indeed, according to one company insider, the Elderflame bundle will cost 9900 VP.

If the report is correct, this means UK fans will need to spend between £90-£100 to purchase enough in-game currency to afford the collection.

The price is particularly annoying because you can’t buy the exact number of coins you’d need to unlock the bundle. You’ll likely be forced to spend a little extra on excess coins that you don’t want or need.

The argument for charging such a high price is that Valorant is a free-to-play game, which means the developers need to look for alternative ways to make money.

However, based on some of the responses on Twitter, the high cost of the skin bundle means that many fans simply won’t be able to afford it.

In case you’ve missed out on the popular game, Valorant is a free-to-play competitive shooter available on PC.

The game primarily revolves around 5-v-5 competitive matches between Agents with vastly different abilities. It’s not too dissimilar to something like Overwatch.

“VALORANT is your global competitive stage,” reads the official description.

“It’s a 5v5 tac-shooter matchup to plant or defuse the Spike in a one-life-per-round, first to 13 series. More than guns and bullets, you’ll choose an Agent armed with adaptive, swift, and lethal abilities that create opportunities to let your gunplay shine.

“Creativity is your greatest weapon.”