Waze is rolling out a host of new features starting today, as the Google-owned navigation app looks to increase its utility at a time when demand for transport apps has diminished due to the pandemic.

The company, which Google acquired for more than $1 billion back in 2013, made the announcements this morning during Waze On, its first ever virtual event, and follows a week after news emerged that it was cutting 5% of its workforce and shuttering several offices. According to reports, the layoffs was in part due to emptier roads, with Waze itself reporting back in April that 60% fewer miles were driven in the wake of the global lockdown.

New “trip suggestions,” which will start rolling out to Waze users globally next month, show users recommendations based previous trips that they’ve taken or locations that they’ve recently been to, so that when they launch the app for the first time they can see a list of places that they are perhaps most likely to with to revisit without having to type in a new destination manually.

Alongside these suggestions, Waze also shows how long the trip will take based on current traffic conditions.

Also launching for Waze users globally next month are traffic notifications, which automatically warn drivers how traffic is likely to affect drives to their favorite or recent destinations. This will also work with planned drives, a feature that Waze launched last year that allows drivers to set alerts for one-time journeys they have coming up.

Traffic notifications work when Waze detects that roads are starting to get busier, meaning that drivers could end up being late — they’ll see an alert pop up on their lockscreen. 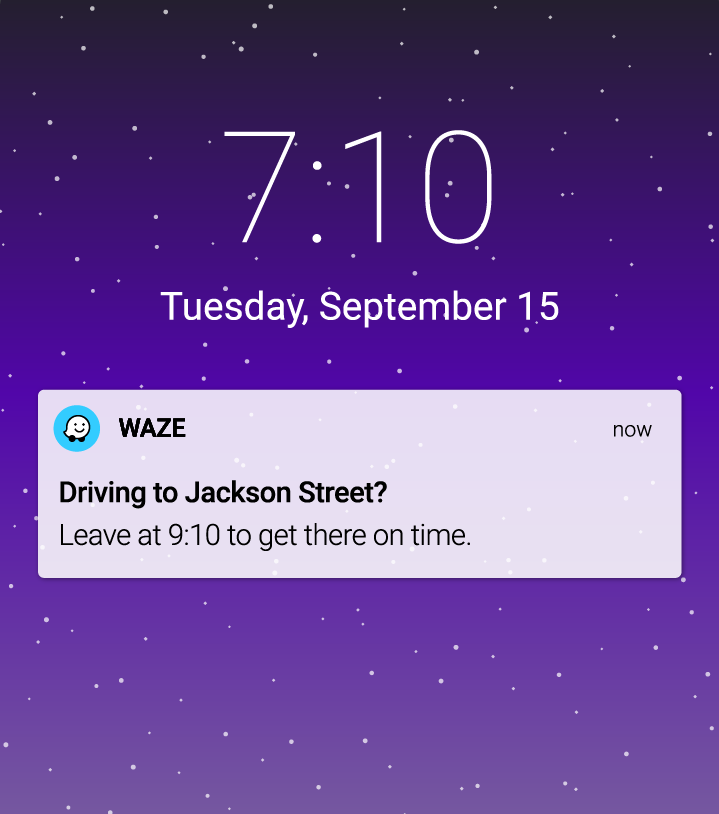 Above: Wazes is getting traffic notifications

In what can only be described as a long time coming for Waze, the company has been testing a new lane guidance feature in beta for a few months already, letting drivers know in advance what lane to be in before they have to make a turn or exit a highway.

It’s an incredibly useful feature, one that has been available in Google Maps for a long time already, and Waze said that this has already started rolling out more widely and should be with more users imminently.

Elsewhere, Waze is also adding a bunch of new features to its built-in carpool service, which is available in the U.S., Brazil, Mexico, and Israel. This includes “auto approve” which means that carowners can automatically accept ride requests without fiddling around with the app, while riders can choose “instant book” in their app to receive an automatic confirmation that their request has been accepted.

Meanwhile, a new “real-time rides” feature, which is launching in Israel later this month followed by other Waze Carpool markets, will offer drivers the chance to receive notifications at the start of their drive if their are riders looking to go somewhere on the driver’s route.

This is actually a useful feature, as it opens up the potential for Waze Carpool to reach more users. A driver might not have been actively looking to take on extra riders, but when presented with the opportunity to have part of their trip subsidized by passengers, this could well entice them.

This also extends far beyond its own ecosystem, given that Waze partners with third-party transport apps such as Moovit to let them search for Waze drivers.

Other new features worth noting include Google Assistant, which will support French, Spanish, and Portuguese speakers later this year, in addition to English which it has supported since last year.