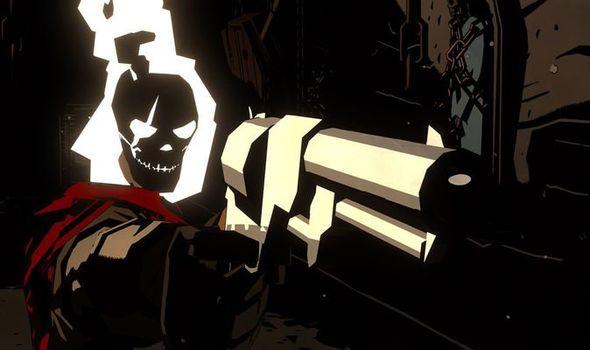 Keeping calm in cover and carrying on while providing a barrage of bullets against your enemies is a recipe for success in West of Dead.

The World of Purgatory you find yourself stuck in is often dark and filled with dangerous, gloomy corners you must be wary of.

And as you weave your way through the different crypts and mines as dead man William Mason (voiced by Ron Perlman), you’ll find yourself jumping headfirst into gritty gunfights.

Sliding behind a sarcophagus can give you the time needed to get your aim right and eliminate those trying to put you down.

The bad news is that your foes have got some pretty mean aim, so you’ll find yourself getting brought back down into the dirt a lot.

The good news is that you will always find yourself back at the purgatory saloon, where the ever-faithful barkeep stands watch and offers occasional bits of advice and news.

It’s a rogue-lite formula that has now become very popular with gamers, providing you with the chance to build up your arsenal and skills, only to lose them all after each run.

Each run ends in the same way, but the next will offer you a different layout and a new combo of weapons to wield.

West of Dead marries it’s cover-based action with twin-stick controls, allowing you to freely fill the air with bullets from six-shooters and shotguns.

You start out with your basic equipment, facing off against slow shooting cowboys and shambling zombies.

As you make your way through limbo, new undead creatures appear, some wielding giant machetes, which can kill in a single throw.

Meanwhile, Flying creatures can cut you down to size quickly and the combinations of these threats can leave you huddled behind cover, or beating a quick retreat.

I rarely felt unfairly outgunned by the creatures that barred my way, and while frustration could settle in due to a loss, it was usually down to my own skittish behaviour.

You soon learn the different ways things attack you and how best to avoid depleting your precious health bar.

You are alerted when an enemy has a bead on your person with a red marker, giving you only a short time to get out of the firing line.

This helps to inform your own behaviour and you soon find yourself sliding across dirt floors and smashing your foes using the different skills you have.

The perma-death mechanic means you lose all your items, but the iron and Sin you collect through your adventure can be put to good use.

Iron is picked up from each enemy you fell and helps you buy better gear from a trader that pops up on each level.

Meanwhile, Sin can be used to upgrade and unlock certain abilities and items that can make your next run easier.

These dual currencies are always spent during your game time and the remaining amount is always lost when you start a new run.

However, they are important in both keeping you competitive against your foes and helping you in the long-term.

By unlocking a larger healing bottle, you make it possible to regain more health, which can be the difference between victory and defeat.

Combat is the main focus of West of Dead but it’s the other parts of the game that make it worth exploring multiple times.

The Cel-Shaded levels are brilliant to explore, and the subtle music and sounds of Limbo help build on the slightly unsettling atmosphere.

You can use lamps to light your way, which can also be used to startle your enemies and help you get the drop on them.

And these flashes of light help emphasize just how good West of Dead looks, even on the most challenging of runs.

The voiceover work from Perlman also helps set the scene of a Cowboy who has come back from the dead (a lot) to help set things straight in the land of the damned.

But while West of Dead is fun to explore and an exciting challenge to take on, it’s certainly not a perfect experience.

Cameras can sometimes switch around and leave you looking for your enemies, and I’m not a huge fan of having to backtrack through cleared passage ways.

This is a problem at the start of the game and is soon solved after you progress to a certain point and unlock a fast travel option.

West of Dead relies heavily on its procedural generation to make it replayable, and this can reward you in different ways.

The combinations of gear and level design usually synergise nicely, but there is sometimes only a certain amount of ways the first level can be created.

Progressing beyond the opening of West of Dead rewards you with more challenging enemies and interesting areas to slide around.

And there are plenty of new places to explore to make it worth another trip down to purgatory on Xbox One, PS4 and PC.