Intelligent process automation provider WorkFusion today announced it has raised $220 million, bringing the company’s total raised to date to over $340 million. According to a spokesperson, WorkFusion plans to put the funds toward customer acquisition as it expands the size of its workforce.

Intelligent process automation, or technology that automates monotonous, repetitive chores traditionally performed by human workers, is big business. Forrester estimates that automation and other AI subfields created jobs for 40% of companies in 2019 and that a tenth of startups now employ more digital workers than human ones. According to a McKinsey survey, at least a third of activities could eventually be automated in about 60% of occupations. And the pandemic is bolstering the uptake of automation, with nearly half of executives telling McKinsey in a report that their automation adoption has accelerated moderately.

WorkFusion, which has roughly 300 employees, was founded 11 years ago by Max Yankelevich and Andrew Volkov. Their mission was to use AI to perform knowledge work currently performed manually. The company evolved into developing the concept of intelligent automation, which combines AI, robotic process automation, optical character recognition, and operational analytics to augment key business processes, including  news screening, name screening , transaction screening, custody and treasury operations, and email processing. 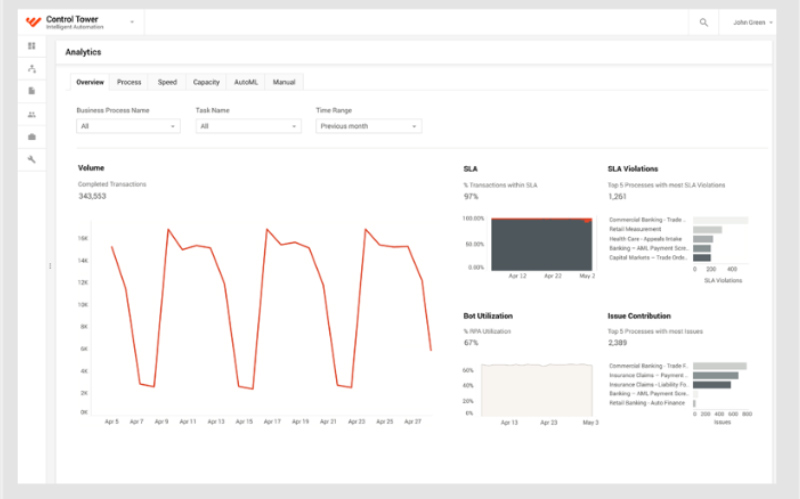 WorkFusion’s industry-specific automation solutions are powered by cloud-federated bots, which automate complex, document-heavy operations, particularly in regulated sectors like banking, insurance, and health care. Machine learning models for certain use cases are pretrained with existing datasets, and customers use their own datasets to refine the models while the bots learn in real time from data and end users. WorkFusion bots also aggregate and share those learnings across the bot ecosystem to create intelligence network effects from which all customers benefit.

WorkFusion has a number of competitors in a global intelligent process automation that’s estimated to be worth $15.8 billion by 2025, according to KBV Research. Automation Anywhere last secured a $290 million investment from SoftBank at a $6.8 billion valuation. Within a span of months, Blue Prism raised over $120 million, Kryon $40 million, and FortressIQ $30 million. Tech giants have also made forays into the field, including Microsoft, which acquired RPA startup Softomotive, and IBM, which purchased WDG Automation.

But by focusing on the needs of enterprise users in banking and insurance industries, WorkFusion says it has managed to set itself apart. Five of the world’s top 10 banks outside of China use WorkFusion, including Deutsche Bank, Standard Bank, and Axis Bank.

“The first wave of robotic process automation brought the power of technology to users’ desktops in all industries and companies of all sizes. Today, we see a second wave emerging,” CEO Alex Lyashok told VentureBeat via email. “Cloud-based, AI-enabled robots bringing Intelligent Automation to enterprises. WorkFusion was first to identify Intelligent Automation as a category in 2015, and we continue to bring pioneering technology to banking and insurance customers today.”